There were so many friendly people staying at our campground in Denali and the Americans sure love a chin-wag so we ended up meeting lots of interesting people. One of which was a lady camping next to us on her own in the back of her car. She was nearly 70…I was cheeky and had to ask! She goes out hiking in the backcountry on her own and uses an umbrella as her only bear defence, which apparently works a charm. She was full of information and advised us on some hikes in the park seeing as there are basically no trails and your encouraged to just walk wherever you please. One hike was around the Cathedral Mountain area which was right beside a closed off area for backcountry hiking due to a high concentration of bears. She actually had a bear follow her and her partner around this area one time, it followed his footsteps in the snow and sat in front of the couple huffing and puffing, looking between them and the pass, weighing up if it was worth the fight. He charged them and she of course got out her umbrella and put on her best teachers voice and the bear stopped just before them and reluctantly walked away. It was only later on that she realised her partner had pepperoni in his bag and had been eating it for the past few days. The smell and oils must’ve been coming out of his pores, into his leather boots, and onto the snow where the bear followed every single step. Pretty cool story I thought! She was a very inspiring lady, it’s a shame we didn’t hear more of her fascinating stories.

The weather was actually pretty damn good so we began the day with a hike up the Alpine trail past Eielson visitor centre. It offered grand views of the valley below and the layered mountains in the distance. We had a brief glimpse of Mount Denali’s peak rising from a cloud earlier on the bus but he was long gone now, masked in cloud for the remainder of the day. Ground squirrels were all over the ridge-line at the top of the hike and eating the wildflowers. 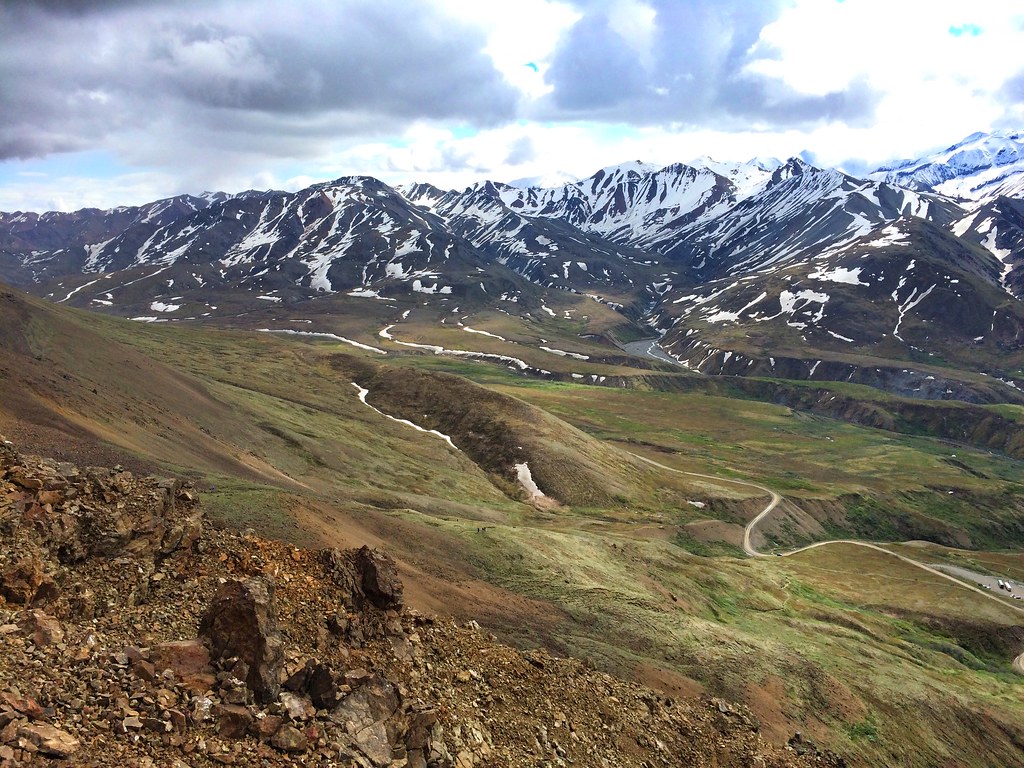 We set off on another hike later in the day which the lady we met earlier had suggested. It bordered the no entry zone around Sable Pass due to the high concentration of bears so we got our bells dinging for the hike. We were confronted by a creek which I wasn’t best pleased about having to cross. It was shallow but flowing fast and I’m ultra clumsy so could envision myself falling and getting awkwardly dragged along the rocks and drowning in 5 inches of water. Well, luckily I didn’t, we took our boots off and I managed to not stumble and die so we could continue on our walk. We followed a sheep trail and ended up walking alongside a volcanic looking mountain with tiny pieces of scoria coloured like a sunset. We passed pretty lakes and had a beautiful mountain backdrop but then we couldn’t work out where our trail went next. We were a bit exhausted after hiking the Alpine Trail earlier in the day so were happy to head back. We managed to stay in a pocket of sunshine all day while we watched weather systems move around the valley with black clouds looming over mountains and dropping walls of rain. When we headed back we could see buses continuously stopping up the road towards Sable Pass, it had to be a bear sighting! 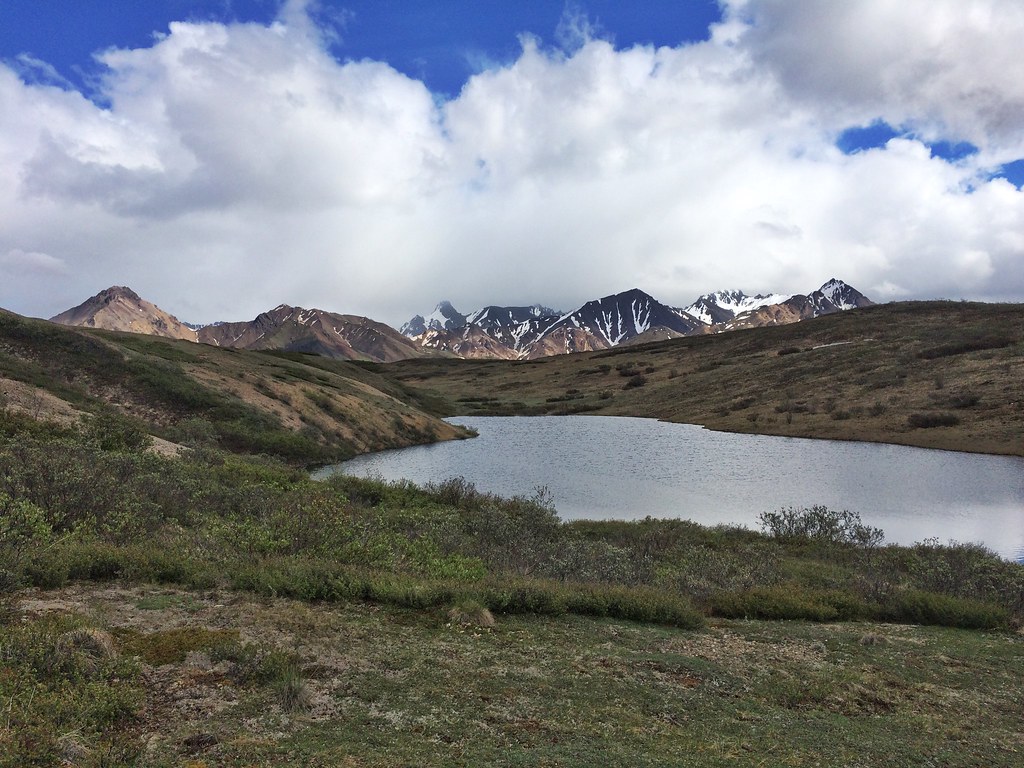 We hadn’t seen a bear all day so fastened our pace, crossed the creek and reached the road. A group of professional photographers were positioned in the same place all day filming a moose and two calves, maybe waiting for a predator to attack. They asked if we’d seen the wolf as apparently he’d passed by just three minutes ago, it must’ve gone right by us and we had no damn clue.

Nevermind, there was a potential bear up the road so we continued up-hill while scanning the area. We slowed our pace as we neared the pass, looking all around for a rock-bear that we didn’t want to surprise. The road went round a bend as we reached the pass and every step was a little unknown as we couldn’t see around the bend. Before we even got a chance though a bus came from that direction and the bubbly driver pulled up and asked where we were heading. We said just along the road and she said “no your not….there’s a bear walking along the road right behind us”. Oh wow! We’d seen photos of bears walking alongside the buses in the park but seeing as our first four encounters were far away we figured that the road encounters were a rare occasion. The driver wasn’t allowed to leave us so close to a bear so she had to pick us up even after my pleads of reversing so we could at least see the bear. I was the angriest person in the world on that bus. Everyone on the bus was happy as a bunny after having a really close encounter, my dream encounter, and we were about 20ft from stumbling into the path of a wild bear.

On the plus side the lovely people we met on the buses came to visit our van on the rainy evening. We were given moose dogs from one couple who live near Anchorage. Their on the roadkill list which means every so often they are delivered a freshly killed moose from the road. So Craig got to eat his first every roadkill which he said was delicious. Another chap named Ron came by our van and had enjoyed hearing about all our adventures on the morning bus that he wanted to give us a copy of his book he’d written – North, South, East, West, where he traversed numerous river systems through the states over 14 years from Canada to the Gulf of Mexico and the Atlantic to the Pacific. We’re both looking forward to reading it. It might of been an unsuccessful day for wildlife but at least we met lots of friendly people.