Finally the day has come to drive into Denali National Park and camp there for four nights, we were super excited! We drove at snail pace the whole way searching for wildlife en route. Some workers were putting out red warning signs which tell people that they can’t walk in an area due to animal activity. We knew the signs back at mile 7 were because of a wolf den, and the other signs were around rivers for birds nesting, so we had a scan of the area but didn’t spot anything. In fact we saw nothing and were quite disappointed, hopefully the buses further into the park will give us more luck. We checked into the campground and got one of the few spots that backed onto the Teklanika River. Moose skat was all around the camp so that was a promising sign. 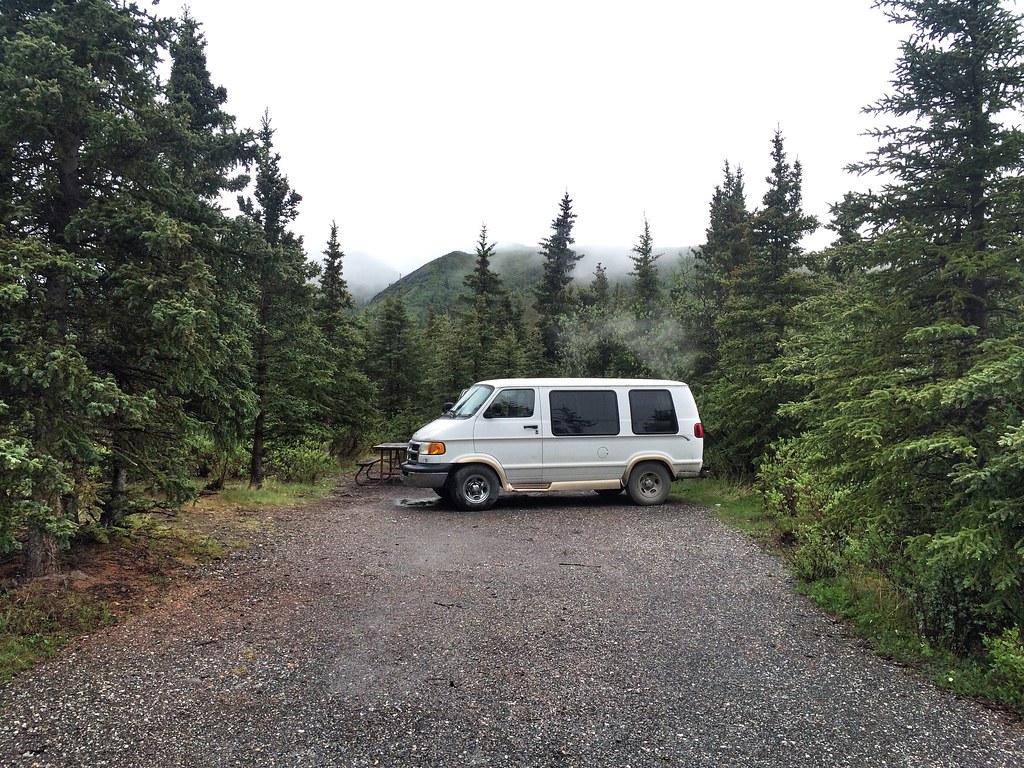 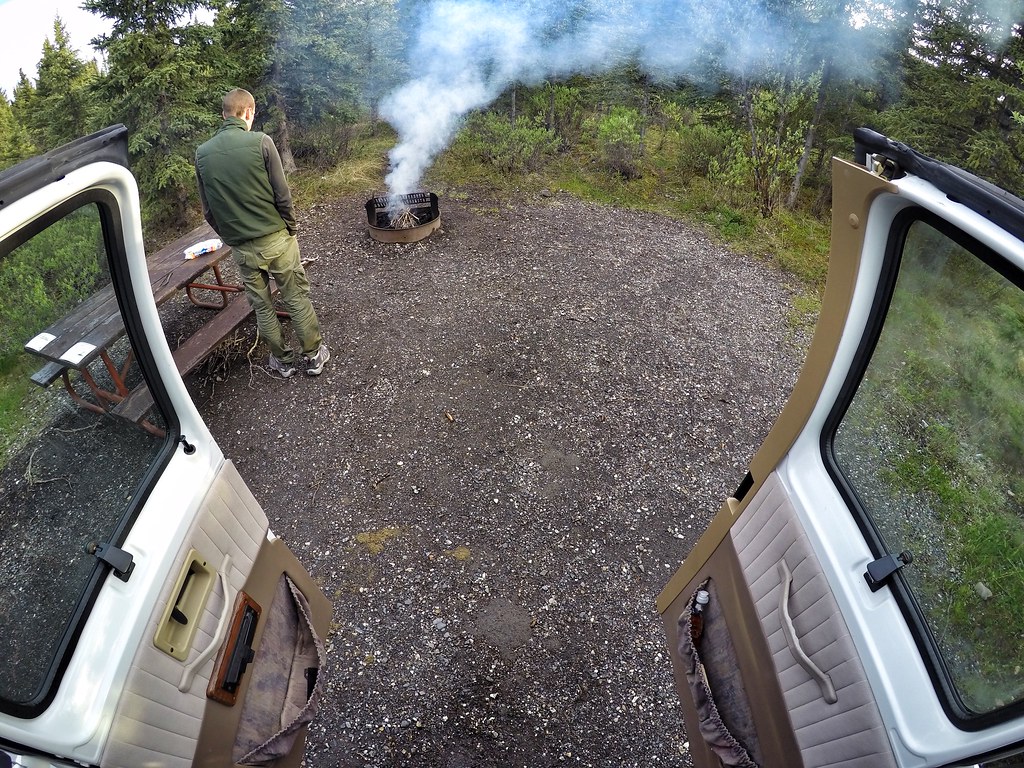 It was pissing with rain when we arrived but once it eased we headed out of the campground to check the bus schedule for the following day. A very friendly couple from Texas were there and helped us out loads. They said we could just hop on the bus now and didn’t have to wait till tomorrow when our ticket began so we grabbed some snacks and joined the Texans. The bus stopped after only ten minutes for a break and the Texans had a word with the driver. They were extremely excited to fill us in with a bunch of wildlife gossip, my favourite sort! For starters a grizzly was seen chasing a moose and her calf through our campground yesterday – even going past a lady before it stopped, huffed at her and decided to continue chasing the moose!! But NOW, the news on the street, or the woods in this case, is that the grizzly managed to kill the calf lastnight and had been seen eating it with her cub near the road. You’ll never guess where it was…remember those red signs I said were being put up as we drove past this morning! Argh we couldn’t believe we’d missed the bears! The Texan lady was roaring with laughter at how close we’d been, she wasn’t laughing at us in a horrible way, I think she was just a little loopy but it got us all laughing at how the heck could we possibly miss two grizzlies eating a carcass?! They got tips from a driver on where to find the bears and as they hadn’t seen a single bear in four days they were very keen to try for this one. We all decided to head back past our campground to the red signs and get off the bus to have a look around. When the bus went past the area some people onboard pointed to where they’d seen the bear earlier in the day just 100ft from the road…salt in the wound! There was a one mile area of the road closed to walkers as it was so unsafe now so we got off where the signs stopped and scanned the tundra with a French couple and the Texans. At last we spotted the bears!!! They were two tiny dots but with the help of binoculars and a zoom camera we could watch them hanging out. They were actually being very lazy and lying down in the shrubs, probably both in a food comma and all we could see was what looked like two beige rocks. If we kept looking though the bears would occasionally look up and it was so damn cute. The Bears in Denali can be very blonde in colour and these two looked like hay from the distance. I guess the cub was two or three years old as it was pretty sizeable. When we realised we couldn’t actually hike back we hopped on the next bus that came by and got chatting to more people. A local from Healy gets the bus into the park at least once a week and last night she’d actually witnessed the bear attack the moose calf and showed us a crazy video of the bear slinging the calf around like a rag doll! Apparently the poor mama moose was running circles around the bear in a dazed panic. 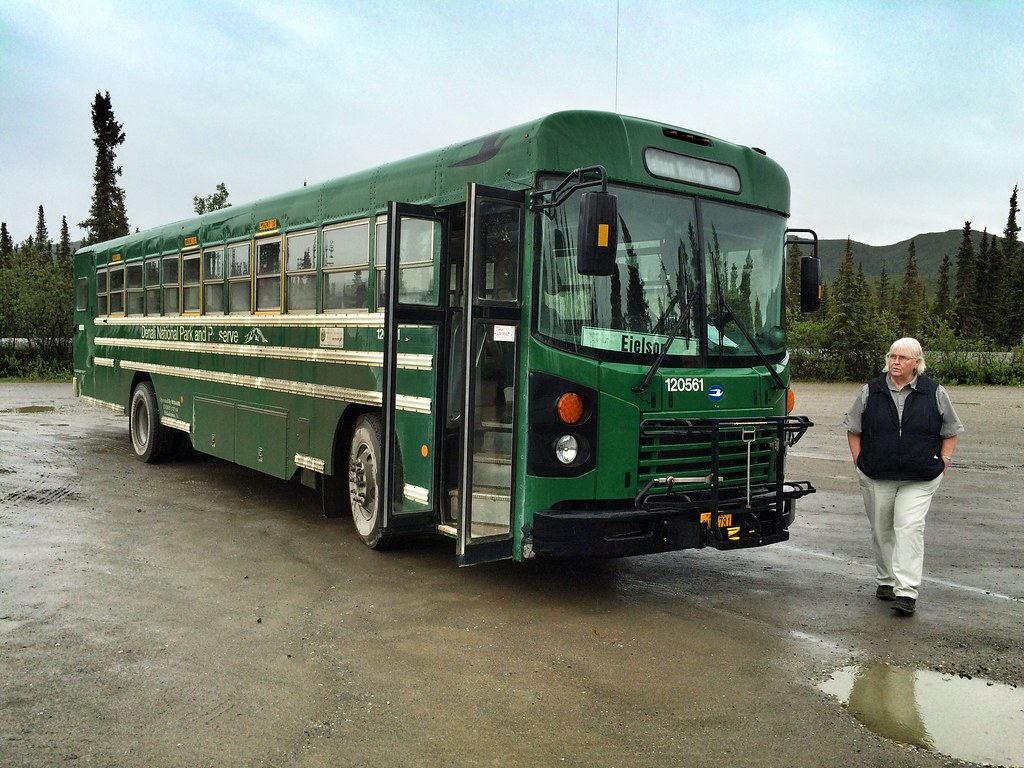 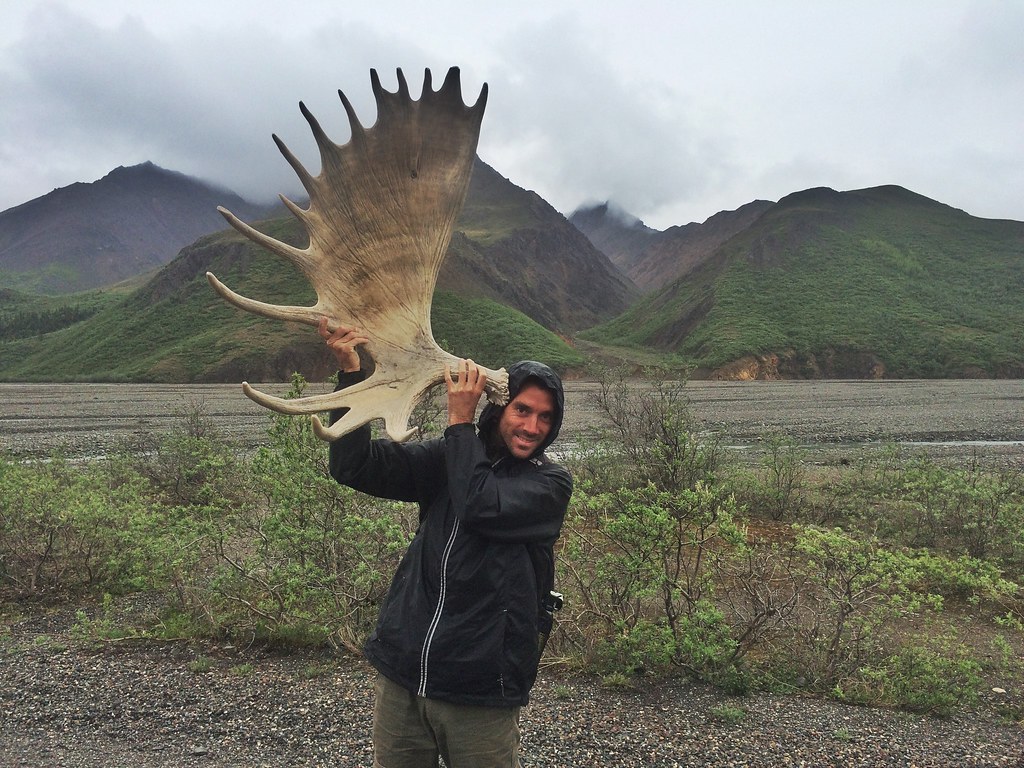 The next day we were booked onto the first morning bus and had the jolliest of drivers named Wendy. The shuttle service in the park is run by a separate company to the national park so they aren’t required to commentate and it’s interesting getting on multiple buses in a day and seeing the different drivers; some love their job and are constantly searching for wildlife and filling our brains with animal facts while others are silent and wait for passengers to shout stop when they see something. But anyway, Wendy was quite the character cracking jokes constantly but also very informative. The road became really dramatic when we began the assent up the Polychrome Overlook. To one side was a sheer rocky wall rising high above us and to the other was an equally as sheer wall of scoria and mud dropping down. It wasn’t quite big enough for two buses to pass so we were having to stop here and there for other buses to go through which gave us lots of chances to peer down the edge. I loved the road actually, it was really exciting and comparable to the wild roads we’d been on in South America. At the bottom of the drop was a vast valley where numerous gravel plains from retreating glaciers now had braided rivers flowing through them. The Alaskan range was to our left and narrow valleys sporadically cut into them. 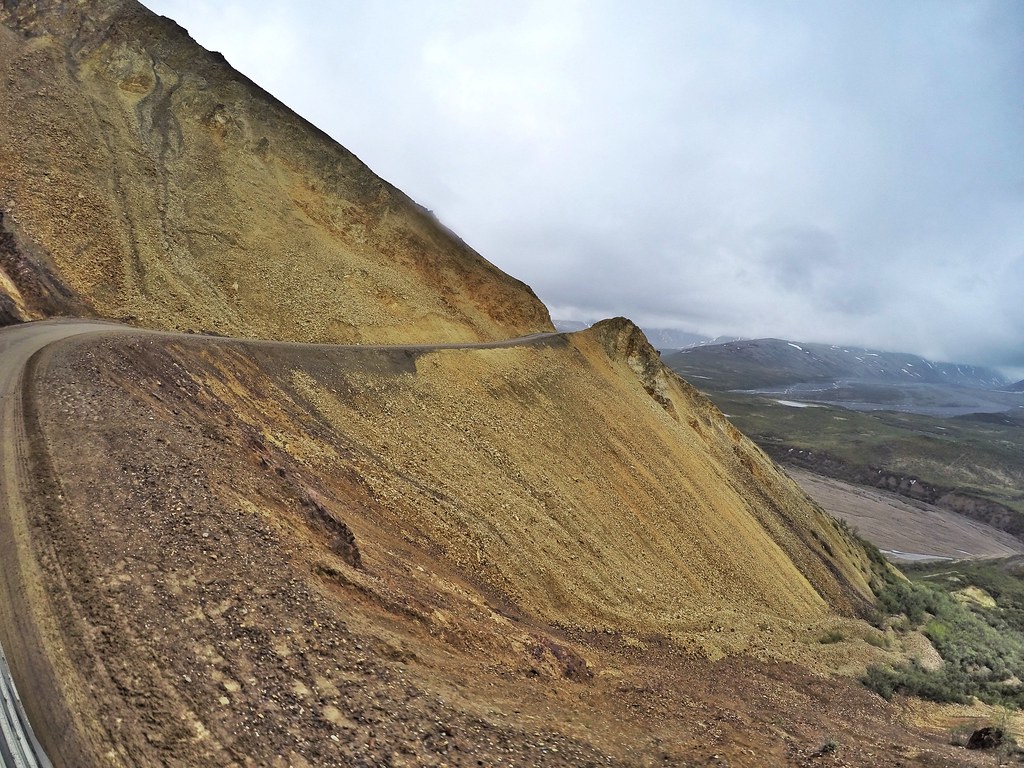 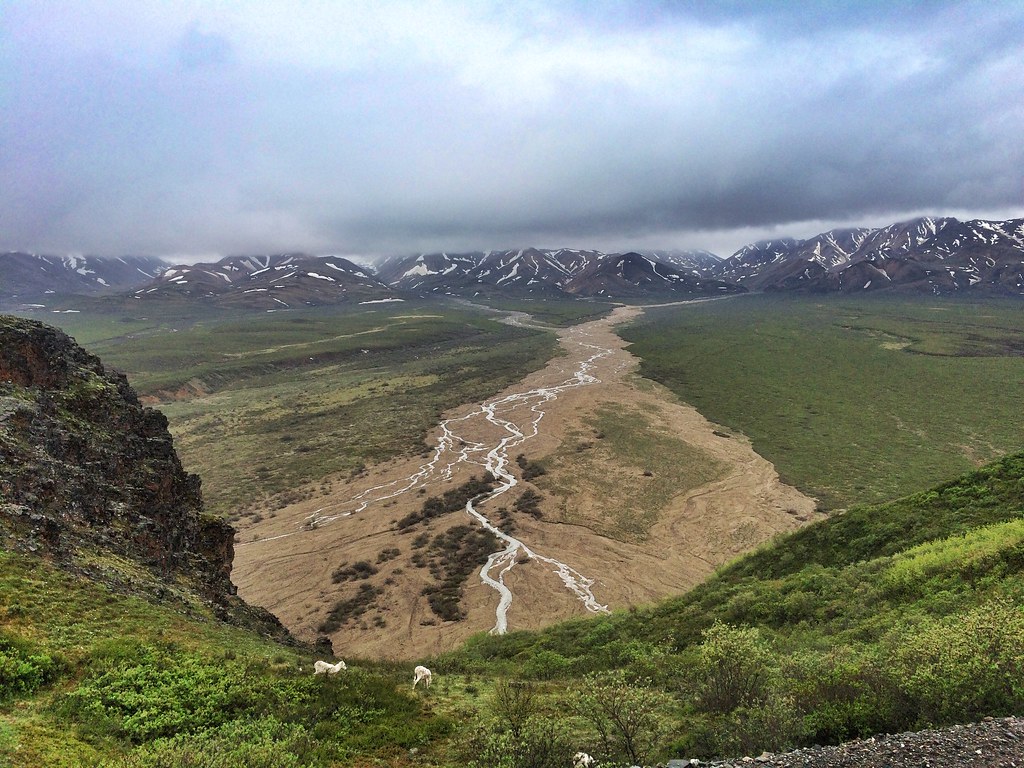 Our first bit of wildlife for the day was Dall Sheep…not exactly riveting but everyone else on board seemed very excited. It was a nursery group so only females and one tiny lamb. They were beginning to shed their fur and all looked rather scatty. As we got further into the park caribou started showing up, from just a mum and two calves to groups of ten or more. None of the Bulls had as big a rack as the one we’d seen while hiking the other day which was a shame. As we reached the highest point of the road, Thoroughfare Pass at around 3900ft, we spotted a moose in the distance, but more of a speck from afar. We only had a few miles to go till we reached the end of our trip at Eielson Visitor Centre but thank god Wendy had superb eyesight and spotted a grizzly on a ridge to our right. He was pretty far away and it took me a while to even spot him but he gradually came more our way and was quite obvious when we saw him moving. After a few minutes we had to leave as we were already behind schedule. We really wanted to watch him for longer so asked Wendy if she could drop us of in the area we saw the bear on her way back which she said it was fine as long as it was .5 of a mile from the bear which was fine by us. 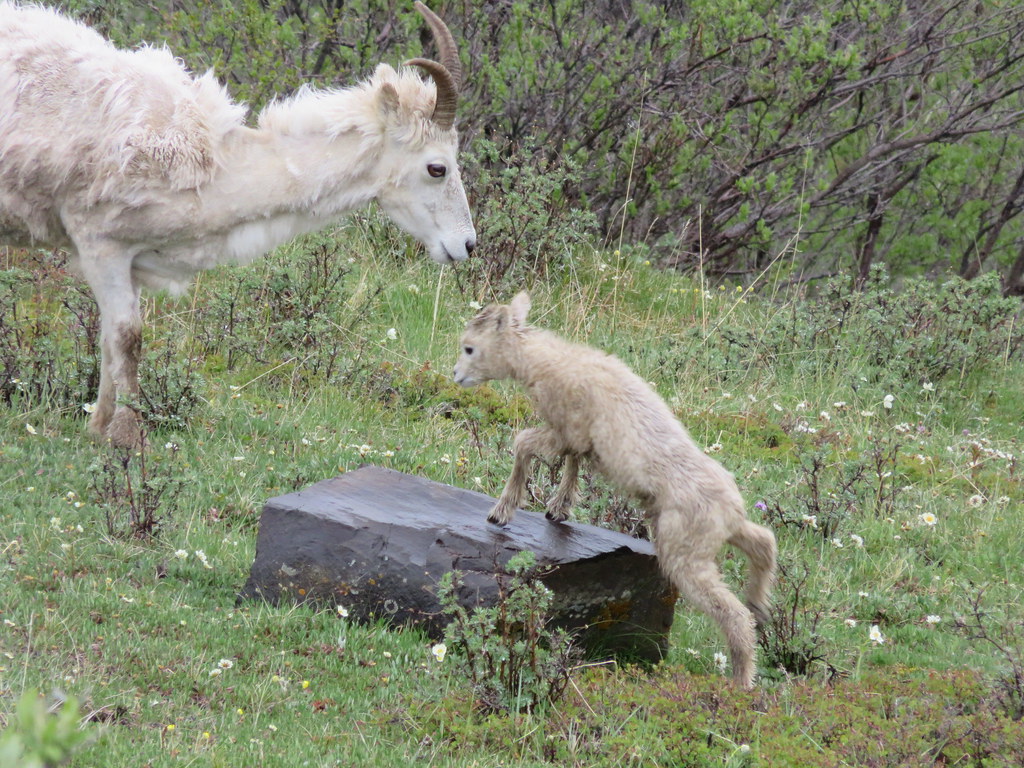 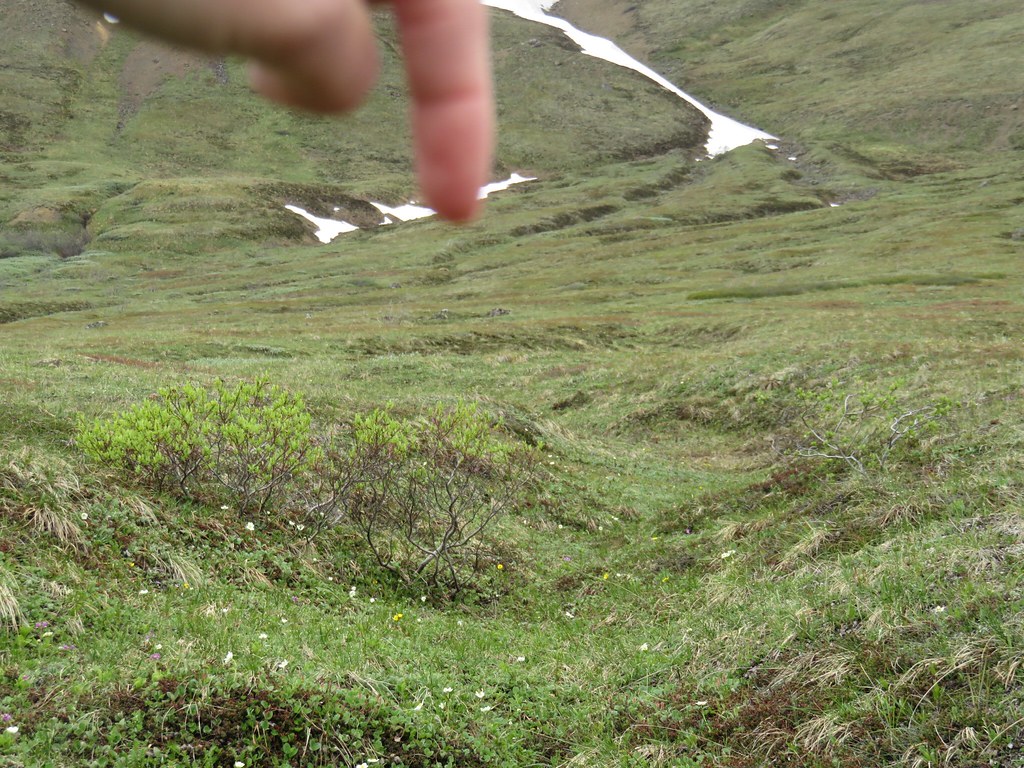 So we went back to the bear area and searched for him but he’d gone already! They move bloody quickly so it wasn’t a surprise but seeing as he was gone she let us out there and continued on the 3 hour drive back out the park. We scanned the hillside and Craig used the zoom on our camera as we didn’t have binoculars. I was ready to give up “it’s like a needle in a haystack!” But then Craig found him!! If we didn’t suspect a bear was in that particular area there’s no way we’d of spotted him. He was lying down and looked like a rock or pale grass. We hung around and watched him for quite a while. Occasionally he would move slightly and we couldn’t work out if he was sleeping or in a stalking style pose – I don’t even know if bears do that but there were three caribou in his vision and they actually started walking towards us. If the bear was considering the smallest one for lunch then we would be smack bang in the middle of his feast so we began retreating down the hill. Buses plied past but no one stopped to see what we were looking at. One bus tried but quickly gave up and left, the sound of their brakes disturbed the bear and suddenly he began walking parallel to us along the hillside. We were over the moon, it was awesome to see one going about its normal life in the wild. He didn’t look at us once, so I don’t know if he knew we were even there or didn’t really care. When he reached a gully he decided to walk down it as appose to continuing East. The gully came right down to the road where we were!! It was a pretty big bear for a Denali bear who mainly live off vegetation unlike the Kodiak Island giants who are 3-4 times bigger. His blonde fur would occasionally glisten as he aimed his body our way and we started getting a little nervous. There were no buses in either directions! He continued down making quick progress towards the road as we gradually backed up the road away from him. Luckily a bus came past and stopped to check out the bear so we slowly walked up to the it and hopped on board where we could watch the bear from a safe place. We spent about an hour just going back and forth on buses past the bear as the drivers just didn’t hang around long enough to admire the bear properly. We even got dropped off up a curving road and followed it back down keeping an eye out for him again but he soon vanished into the wilderness. 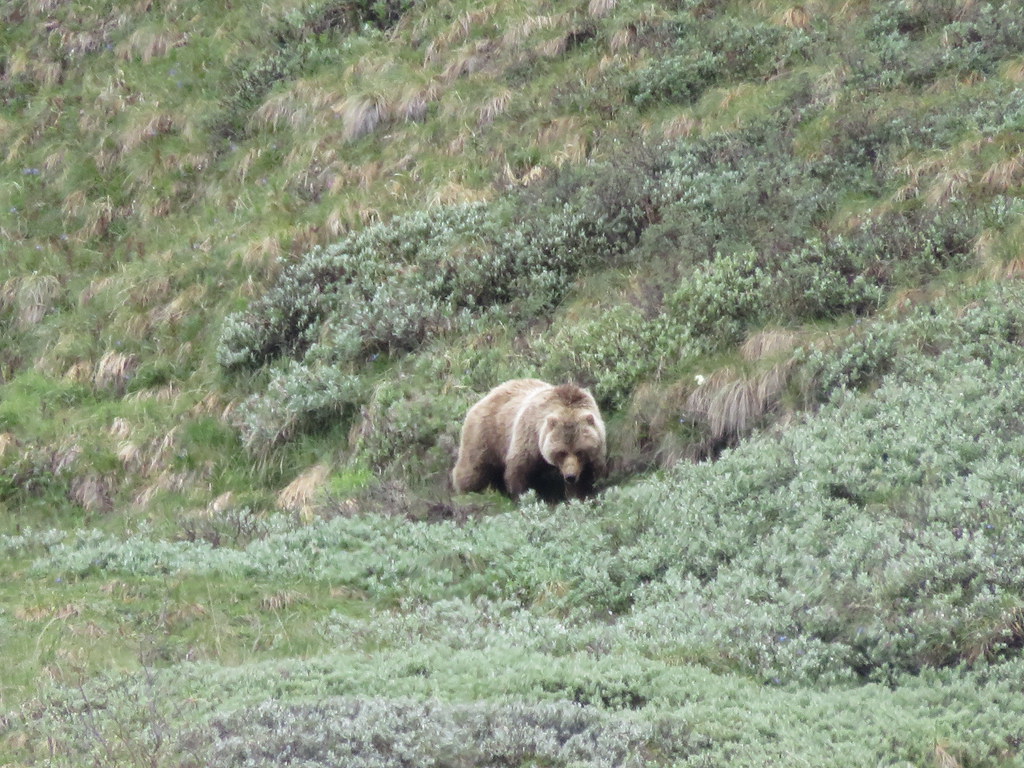 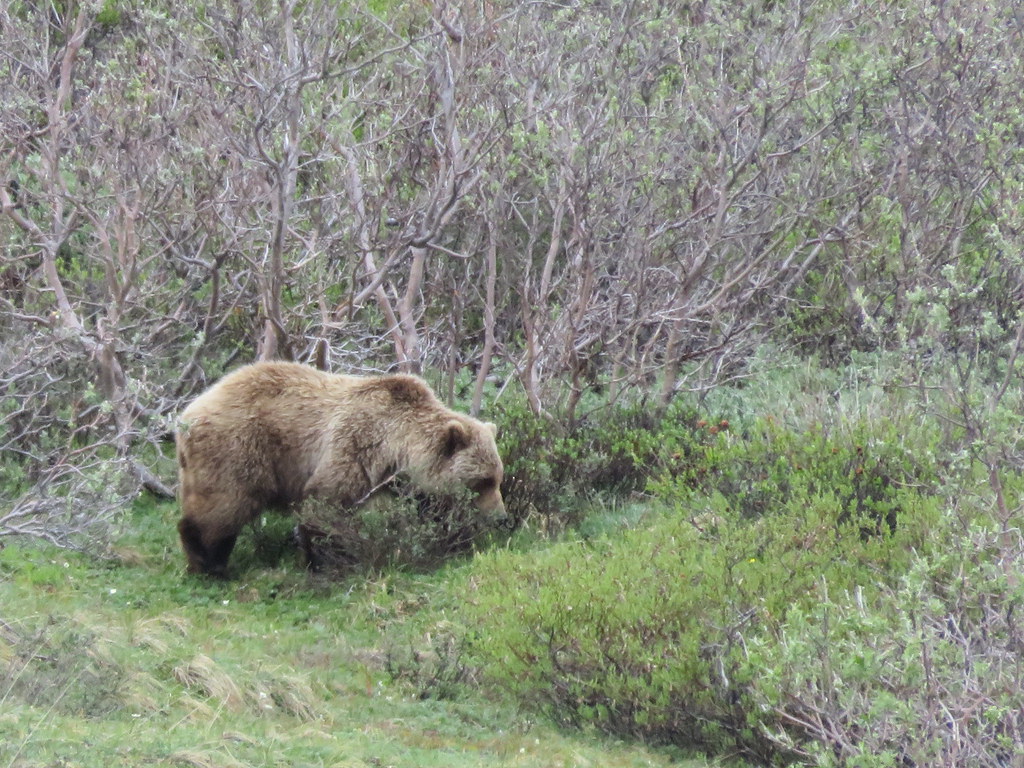 The bus ride back took us past another bear who’s skat we’d walked past just an hour before! It was such a fresh poop that Craig even put his hand over it to see if it was still warm. Likelihood is he was hidden like a rock and we had no idea we were even walking right past him. He or she was sleeping very peacefully and was totally blended in with the surrounding tundra. A very successful day in Denali National Park. Three more to go!