Denali National Park is so full of wildlife that there’s a 95% chance of seeing a grizzly bear. It’s also home to caribou, moose, wolves and lots of smaller mammals that to be quite frank we’re not all that interested in. We were there for the big five (the fifth would be the black black which is a rare sight in the park – grizzlies rule here). 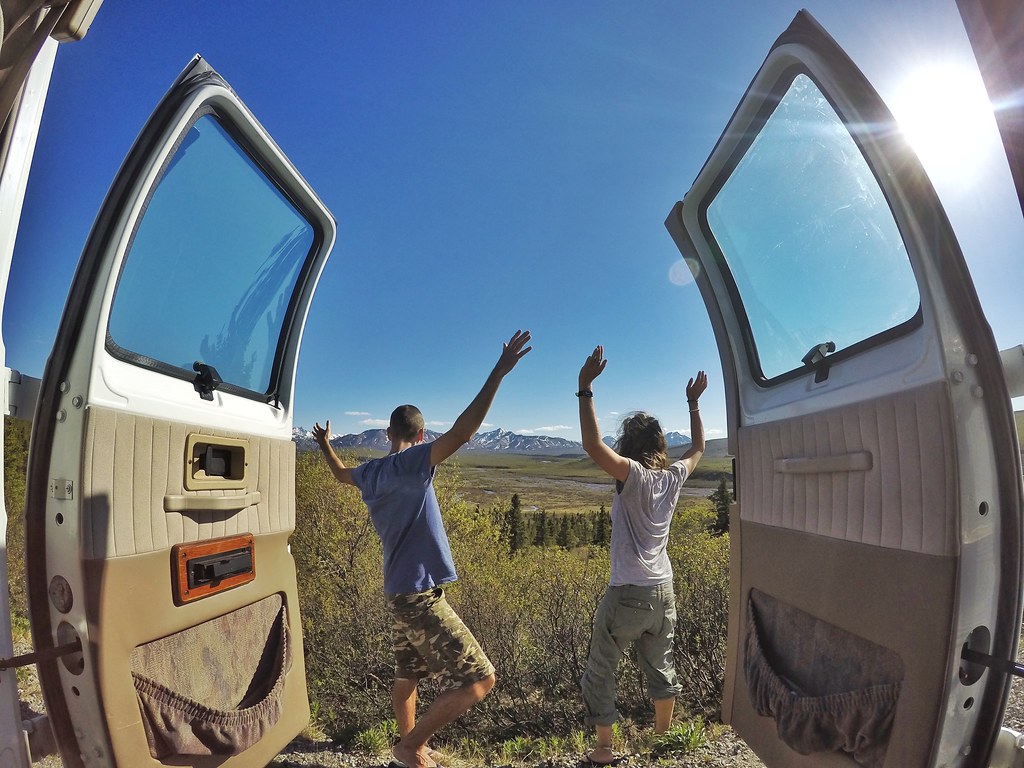 There’s just one road that heads into the National Park and it’s 92 miles long. It was built high up so there’s great vantage points to see wildlife and your best chances aren’t out hiking but actually while sitting on a bus. They anticipated the queues of cars piling up at every bear sighting early on so decided to ban all private vehicles past mile 15. From then on you need to pay for a shuttle bus which are school buses painted green and they take you through the park. With lots of eyes wildlife is easier to spot and you can hop on and off to do hikes in the backcountry. We found out that the Teklanika campground which is 30 miles into the park allows us to drive our own vehicle to the campsite as long as we stay a minimum of three nights and we don’t drive our vehicle once we arrive at the camp. Not only that but they offer a special ‘Tek Pass’ which lets us ride the bus as many times as we want for the same price as a one day ticket from the entrance. So it was a total bargain and sounded like a great way to see the park. We never stay in campgrounds but we liked the sound of this one and it also cut two and a half hours off the journey through the park each day. We spent some nice sunny days hiking at the entrance of the park before our booking at the campground begun. During that time we saw about 10 moose along the 15 mile road but we were pretty disappointed that we didn’t see more wildlife while driving. We did an evening stroll along the Savage River and spotted a family of Dall Sheep on a rocky outcrop who happily posed for us. The valley really reminded us of Wales, it was very un-Alaskan with no snow around and odd rocks coming out the hill-sides, plus the sheep made it that bit more Welsh. 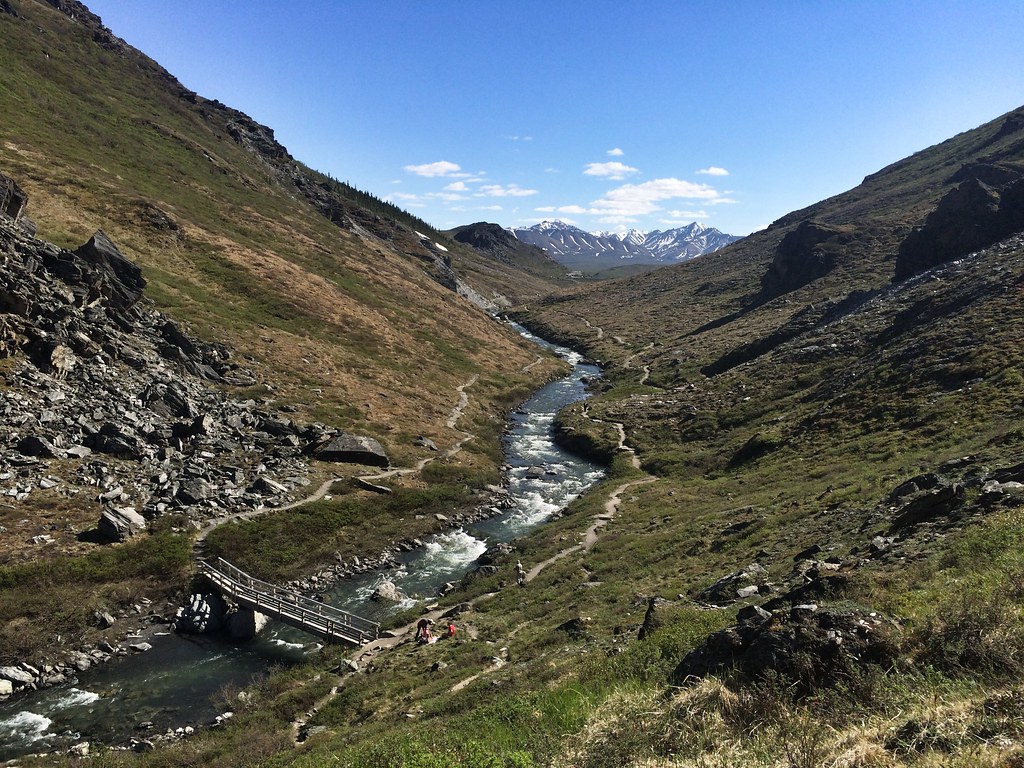 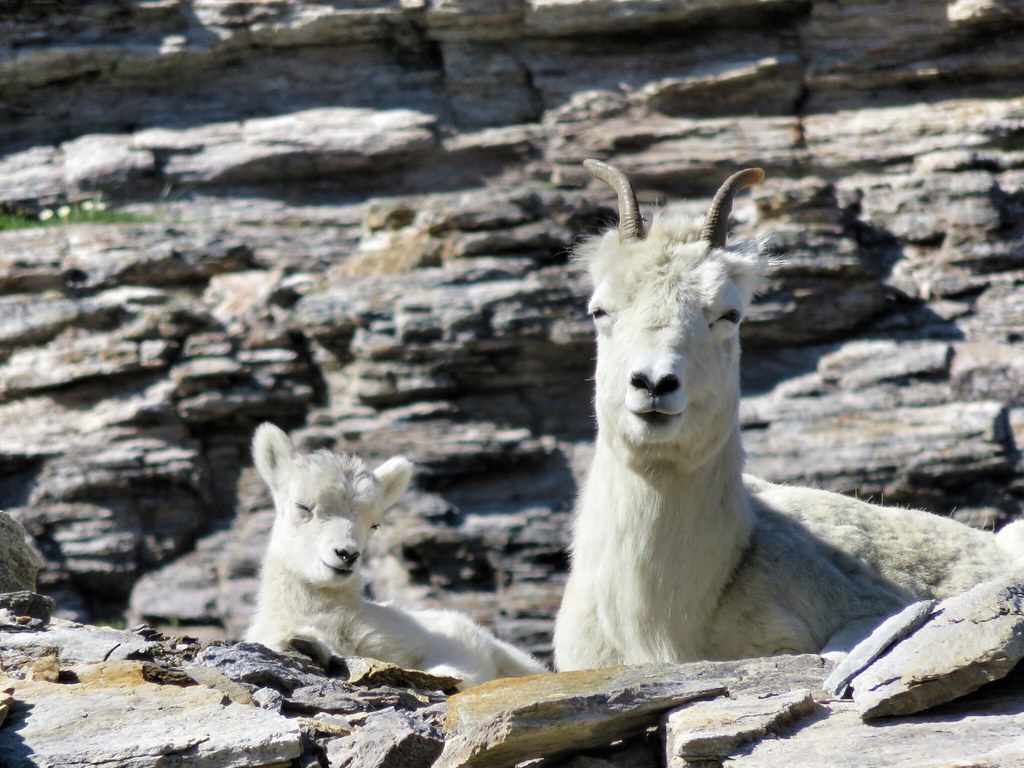 The next day we headed uphill along a fair few switchbacks on the Savage Alpine Trail. I really loved this hike; we had clear views all around, bright sunshine and a cool breeze which meant happy non-sweaty hikers! The view was awesome with the wide valley stretching below us. It was mainly covered in tundra but clusters of forest dotted the surroundings and the park road cut its way through the terrain. The Savage river was braided through the gravel plain and a mountain range made the perfect backdrop. 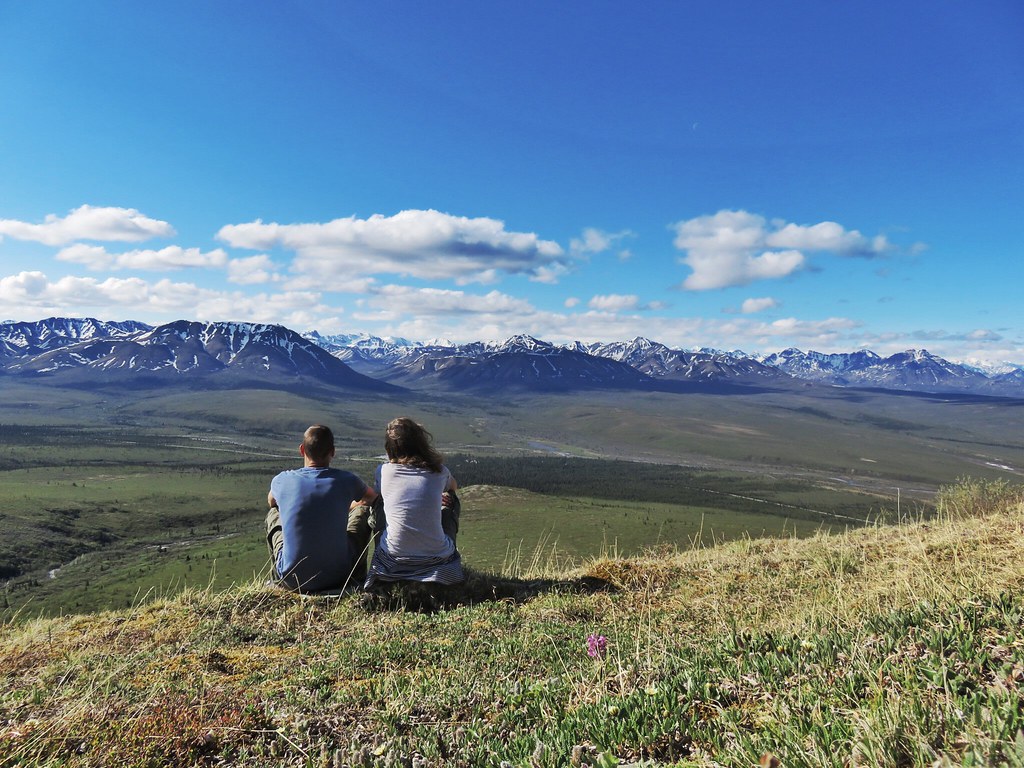 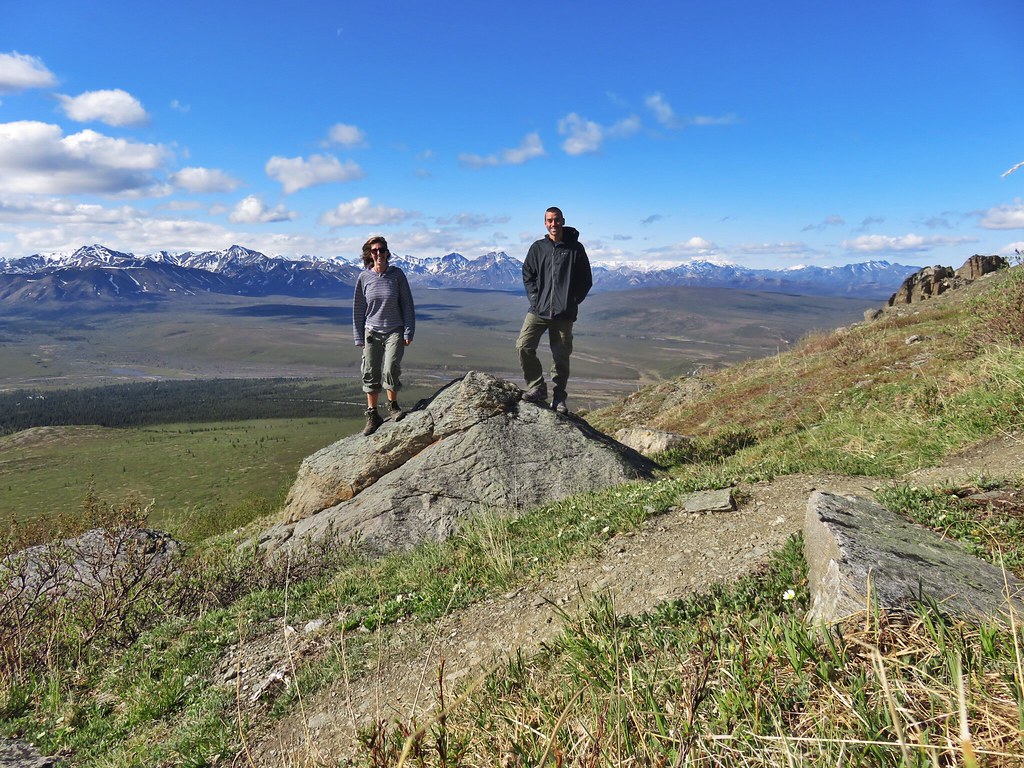 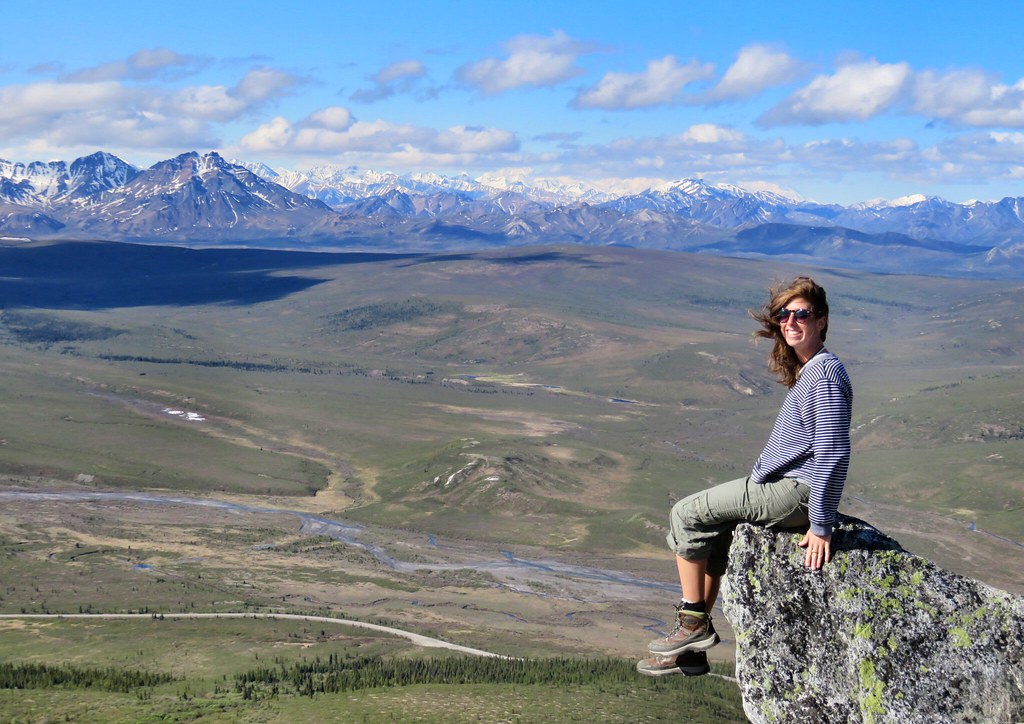 As we reached the top of the trail the winds suddenly became brutal and we went from rolled up trousers and tops to jackets and hats. There were lots of arctic ground squirrels around who were making crazy noises and scurrying through gaps in the rocks and along our trail. One even came right up to me as I was sitting on a very precarious ledge and started barking it’s odd noise at me, I thought he was going to bloody run up and bite me! I guess I was invading his territory. 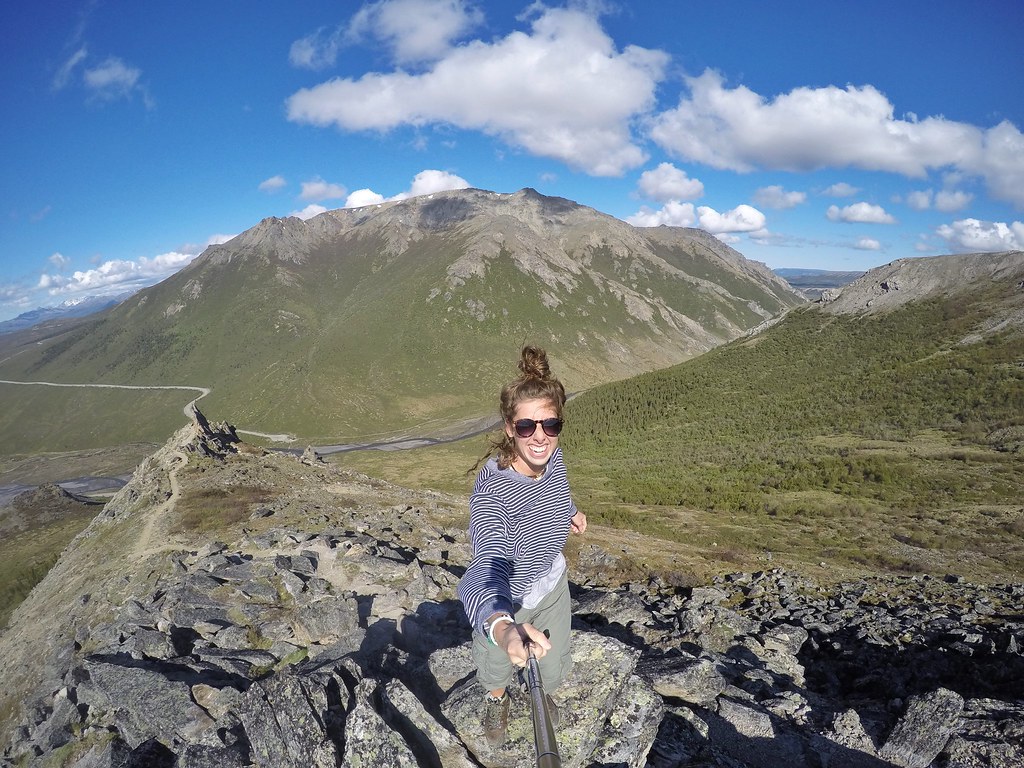 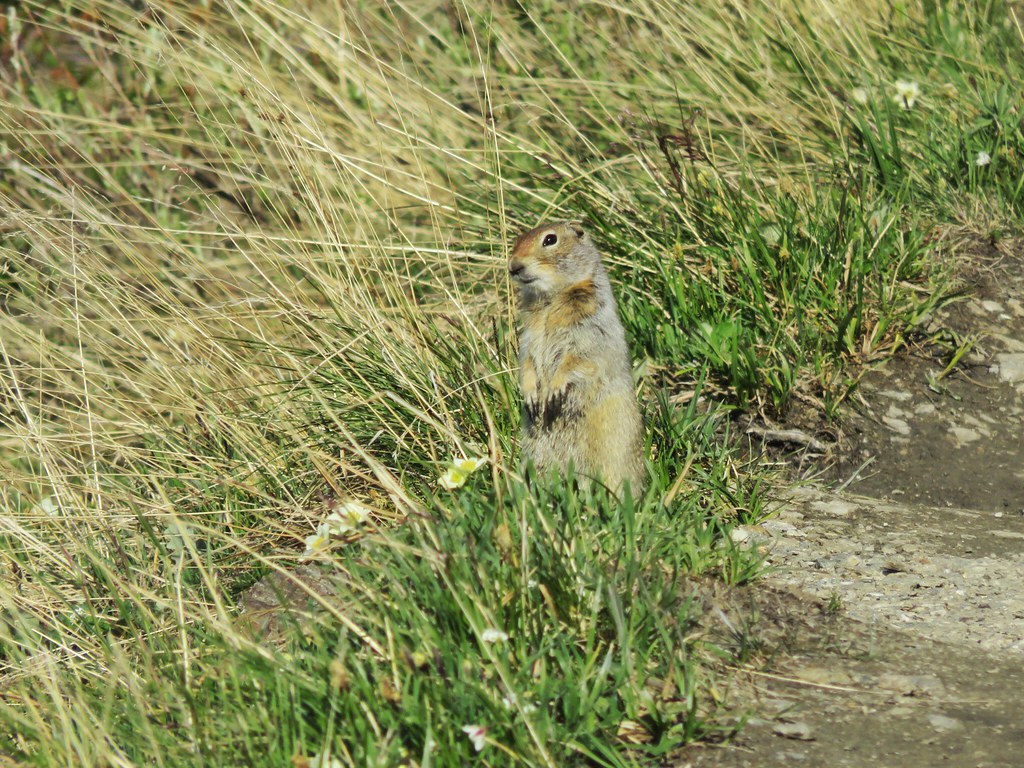 There were some really cool rock formations around the ridge line which we had fun climbing up on. When we sunk behind a ledge to escape the wind Craig spotted some wild caribou. There were only five of them which is a tiny herd so maybe more were hiding. One big male had a massive velvety rack, I can’t imagine how awkward it must be carrying that around every day. A female was lying sideways on the grass and she looked like she was heavily pregnant. When we zoomed in with our camera it even looked like she could be dilating, I’m no maternity wife but she had a very different derrière to her buddy’s. 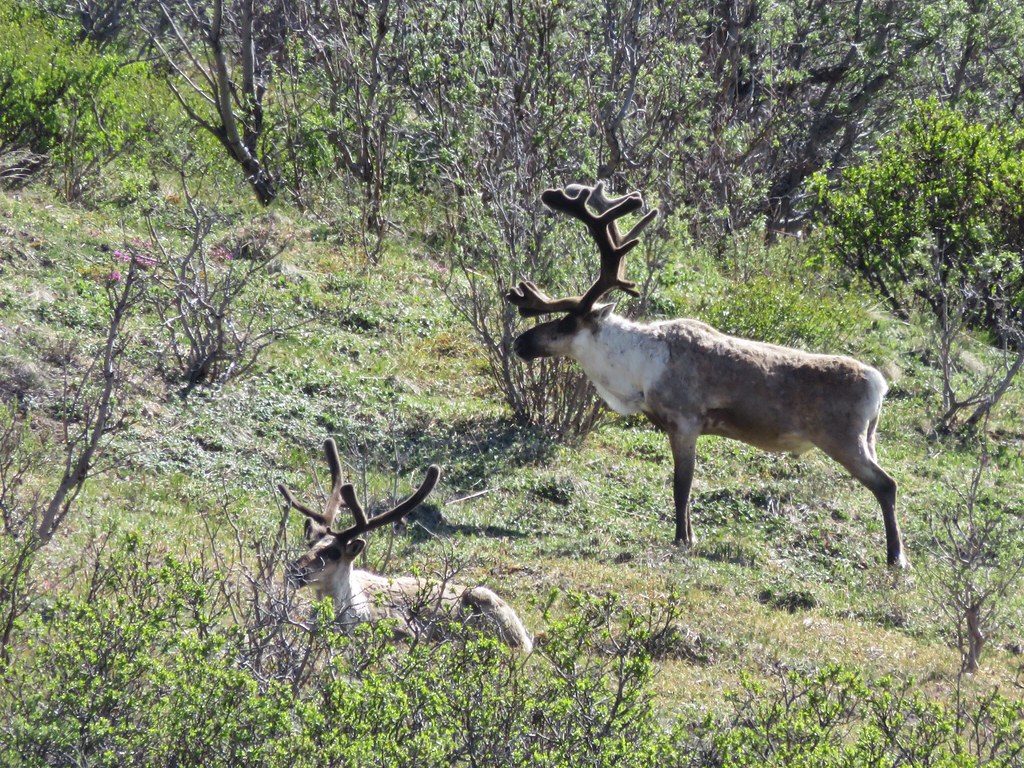 When we weren’t hiking we spent a lot of our time hanging out at viewpoints hoping to see a bear walk past but all we saw was a lone moose. We’re keeping our fingers and toes crossed for our four days inside the park! 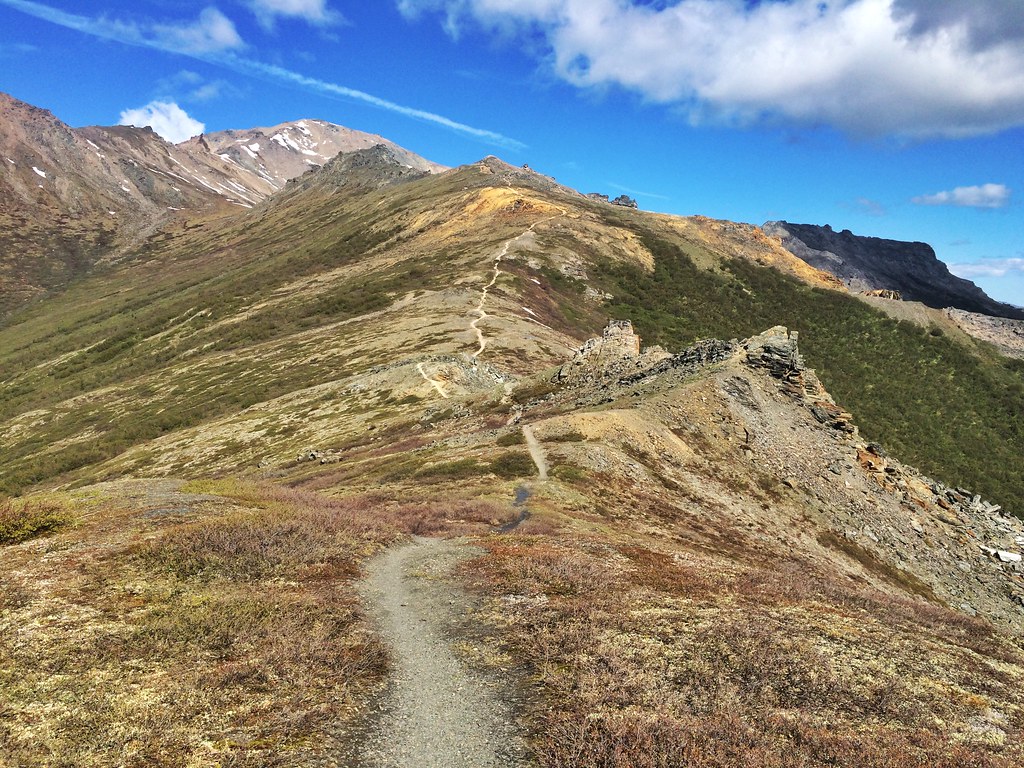 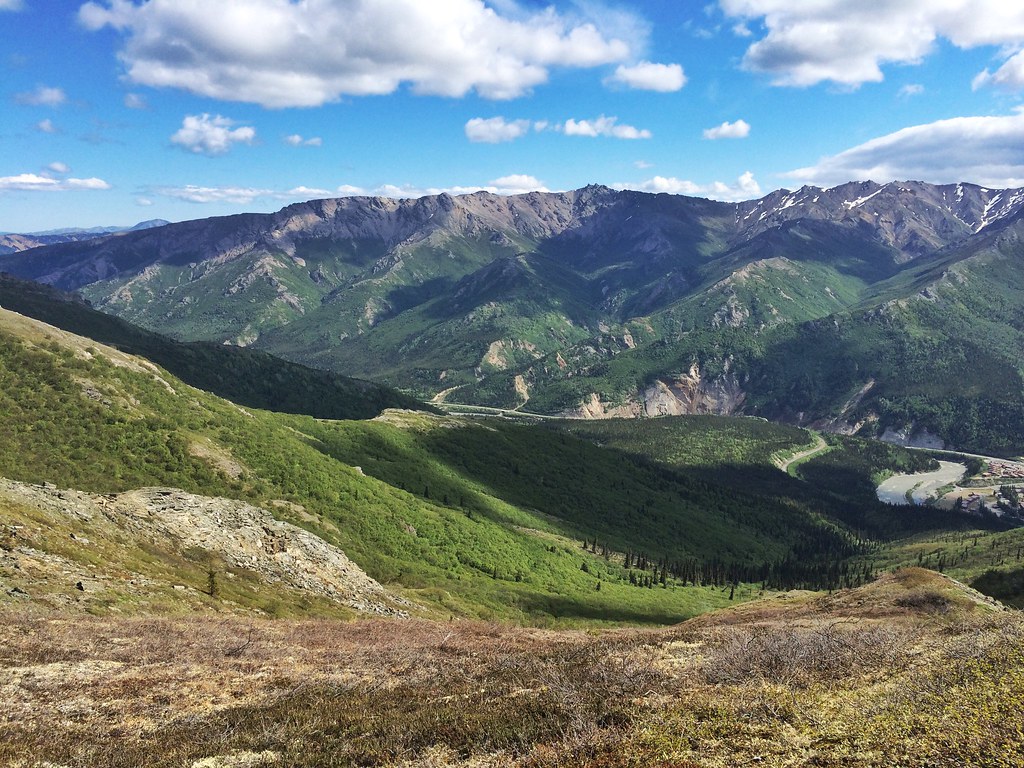 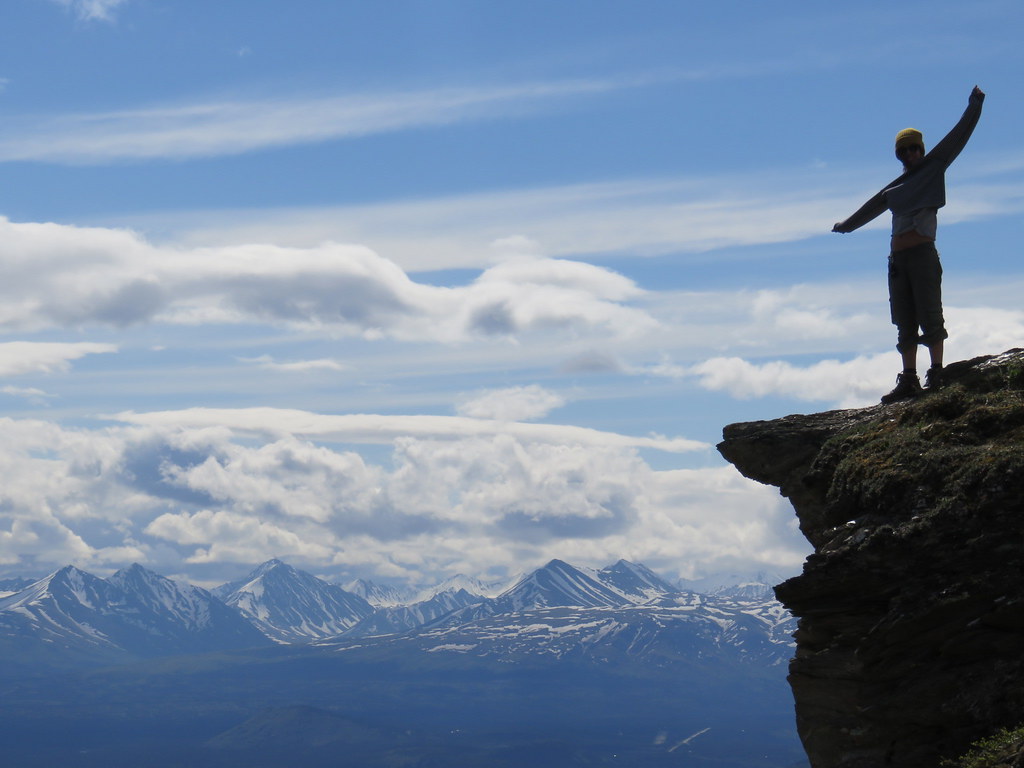