The Matanuska Glacier is one of Alaska’s most accessible and you can get a birds-eye view of it just from driving along the highway. The road sits high up across the valley so the 27 mile glacier can be seen like a huge streak of white against the green background until it blends in with the snowy Chugach Mountains at its source. It was a great view from the road but we wanted to get even closer so had to pay $25 to enter the private land where the Glacier is situated. From there we could actually walk on the glacier without a guide so we were super excited. 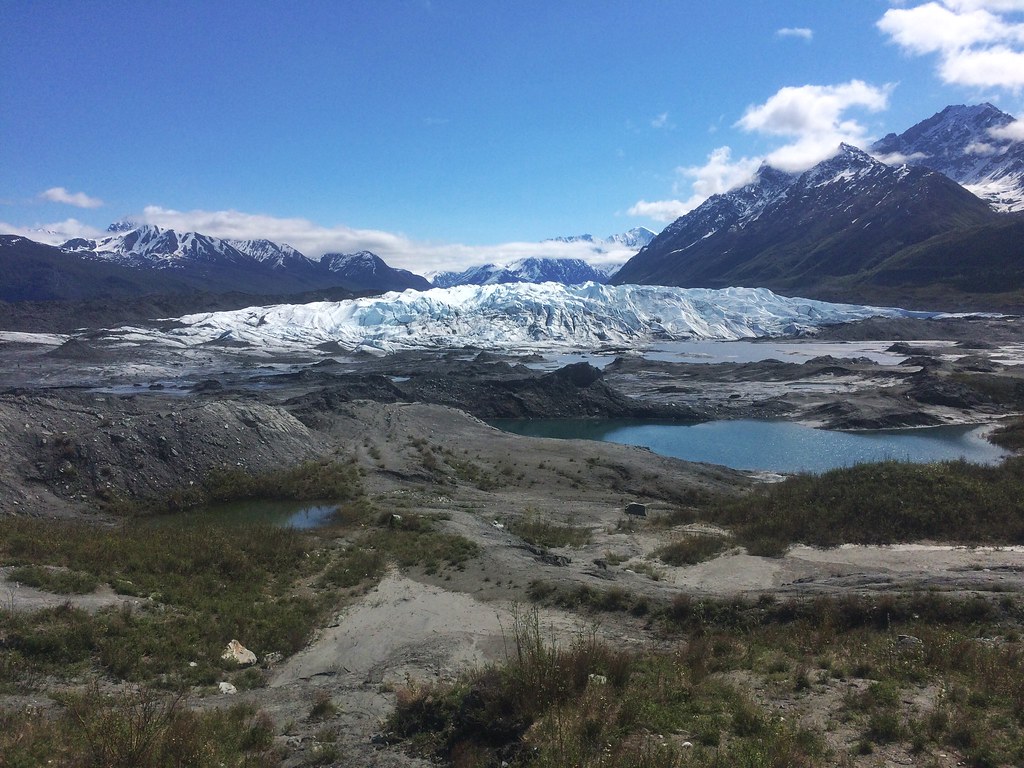 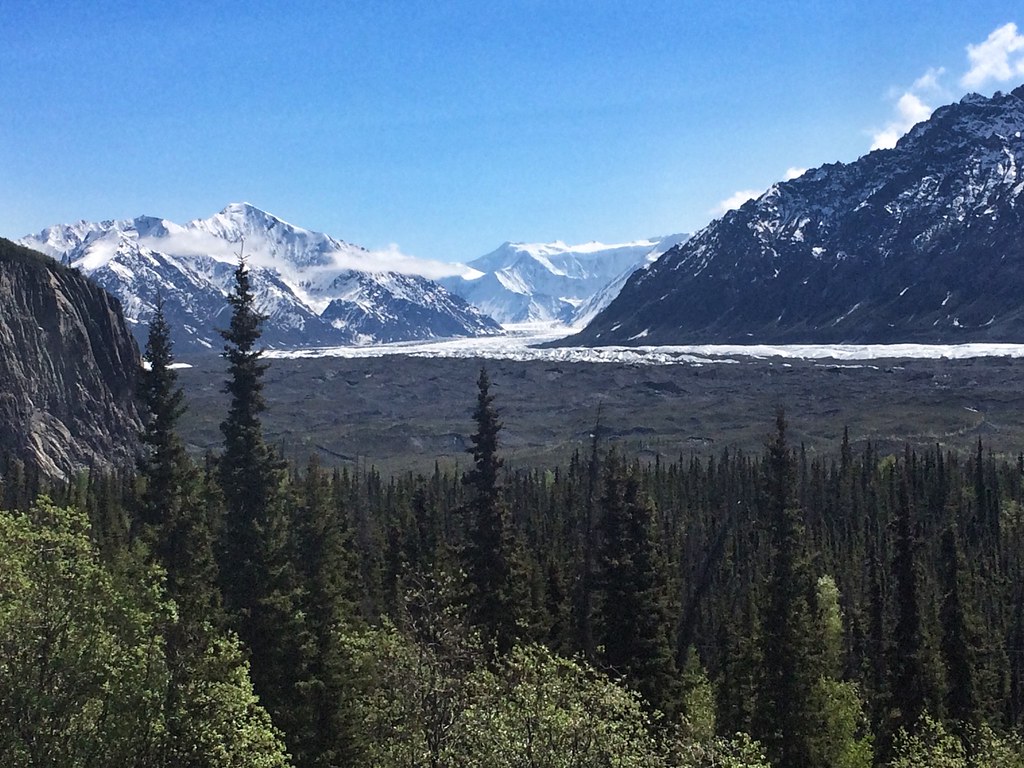 Orange cones led us towards the frozen wall of ice and the route took us over wooden planks that wobbled in a gooey mud pool. From then on we were walking on the glacier itself but it didn’t look like we were; it was dirty black ice and the only reason we knew we were on ice was from the crunching sound under our feet. 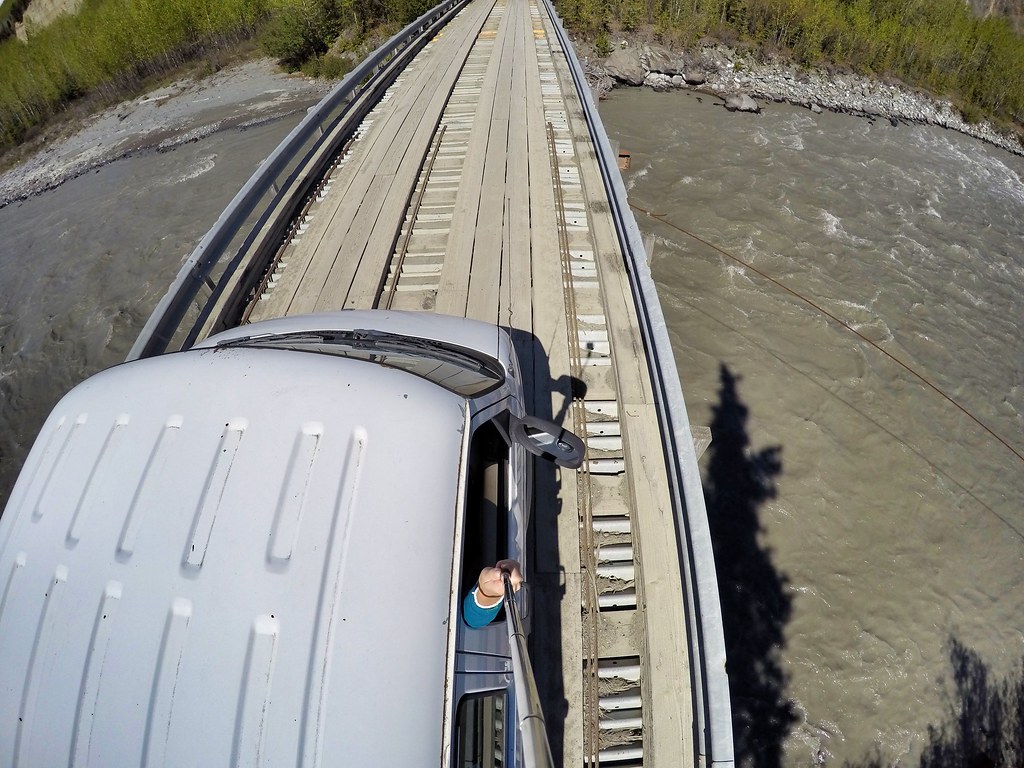 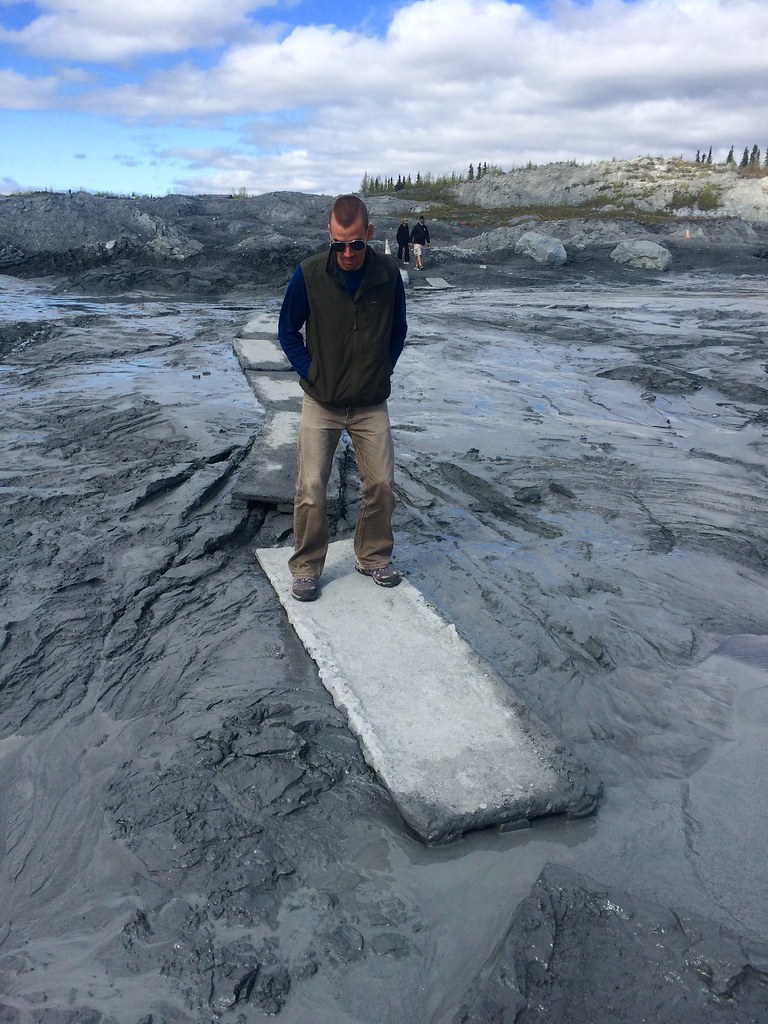 Before we’d even stepped on the white and blue ice we were confronted with a sign saying ‘no entry, guided tours only’ We felt totally scammed and we certainly didn’t feel like we’d walked on a glacier so we decided to venture on a little further for a better view. Within 30 meters we were on the glacier proper and actually saw a couple other people walking past so it seemed that most people ignored the sign, I guess it just covers the owners back if anyone has an accident.

We found a huge curved wall of ice like a wave had frozen in time and the further along we walked the better the views became. We were actually walking on a glacier, on our own! How cool is that! OK it was probably rather dangerous due to crevasses and falling ice but we were very careful with every step. 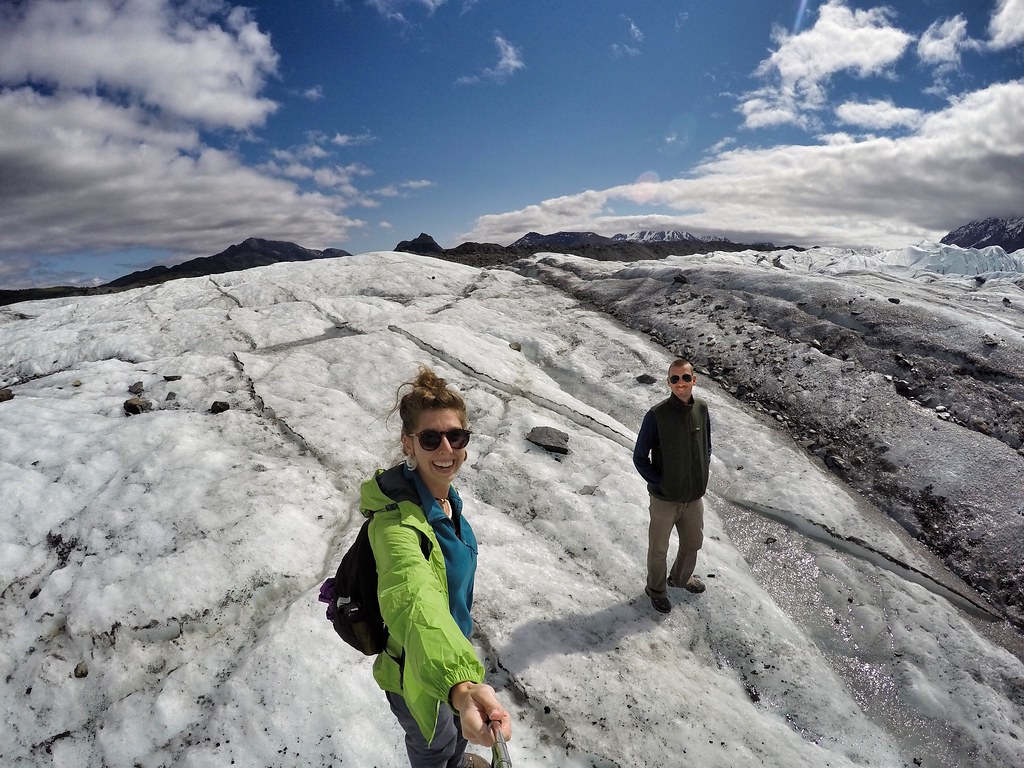 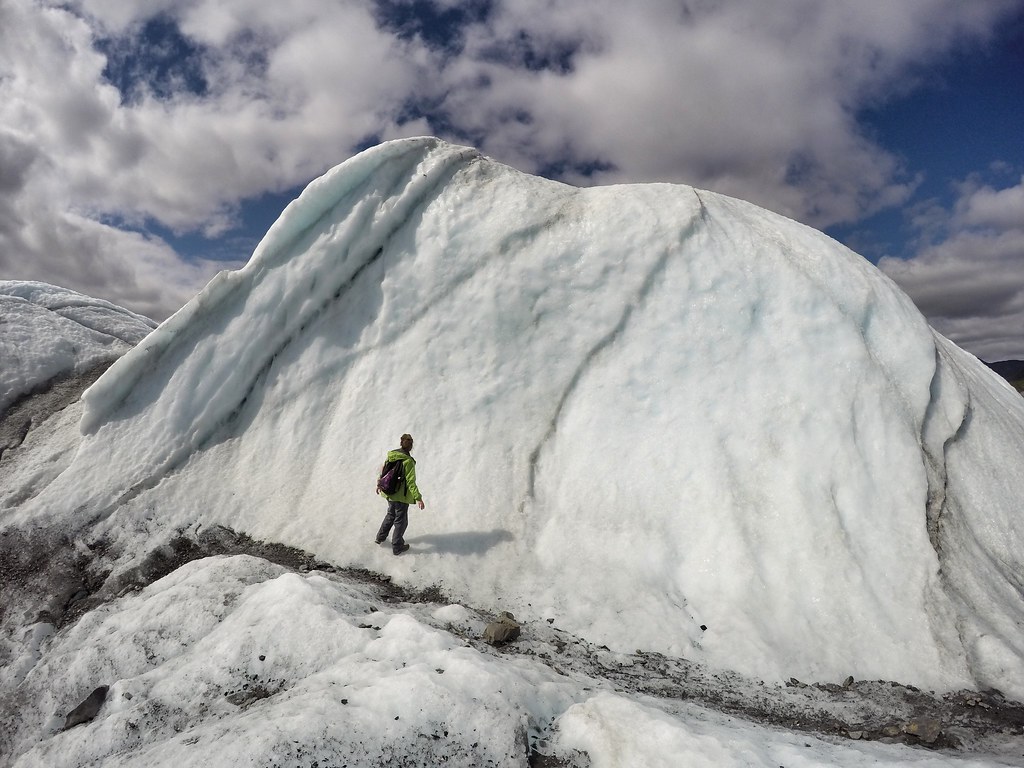 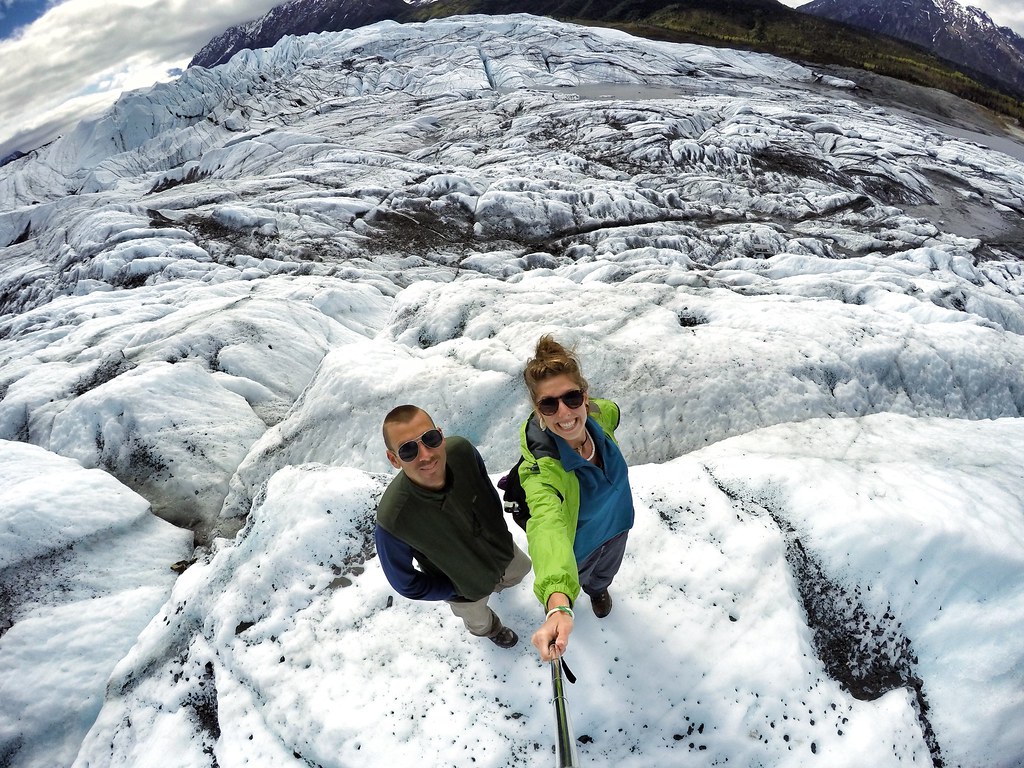 There were cracks beneath the surface that were a baby blue colour from water trickling underneath. One area had half a dozen lines streaked across the ground, some were narrow and grey while others were thicker and blue, we decided it wasn’t a wise area to walk so headed back. The new route involved sliding down a sort of gully, it felt like a safe one, if that’s even possible? Once we got down it we were right in the thick of things. The ground was deeply cracked with glacial streams running through them and was more like a land of ice-islands so we stuck to the biggest areas of ice and away from the edges. The view was insane; the huge mass of the glacier was right in front of us rising higher than a house. It looked like a child had gone wild with blue and grey crayons squiggling lines all over the ice. Sadly for some reason this glacier had grey water flowing from it as appose to a vibrant blue, but it was still awesome to see the source of the Matanuska River which we’d followed along the highway. It wiggled like a snake through the glacier with some walls of ice rising a few meters above the water. We were really impressed with the scenery, and it was ideal for us as we hate tours, not only because of the crowds and annoying people but also the price so Matansuka was perfect for us. 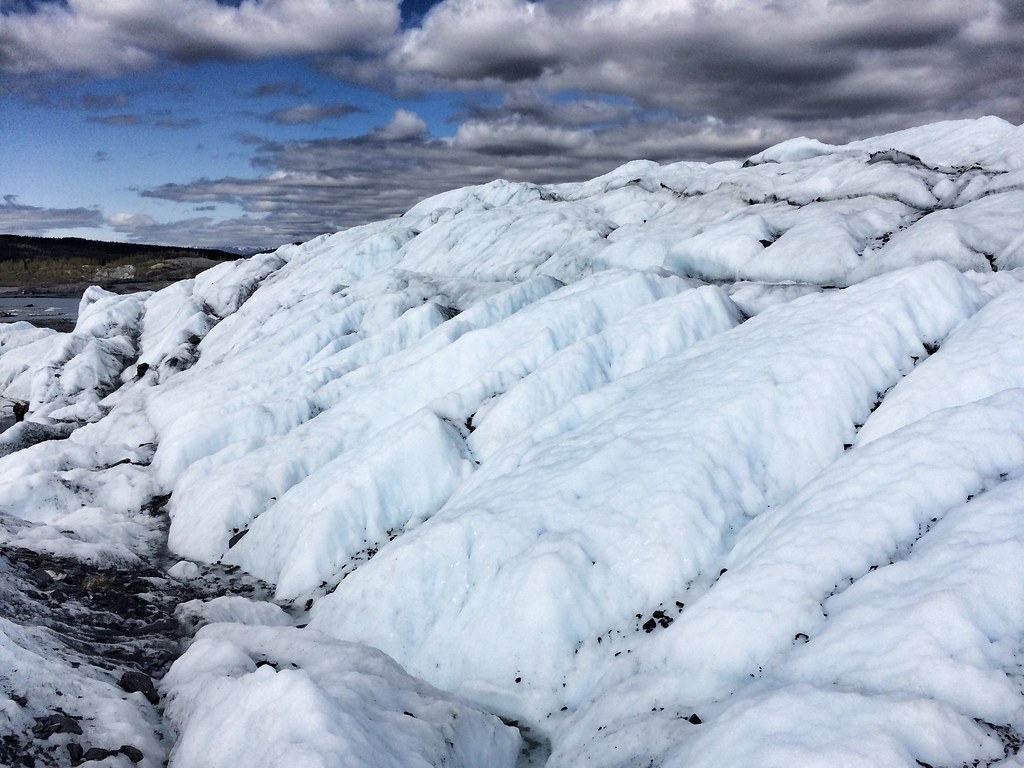 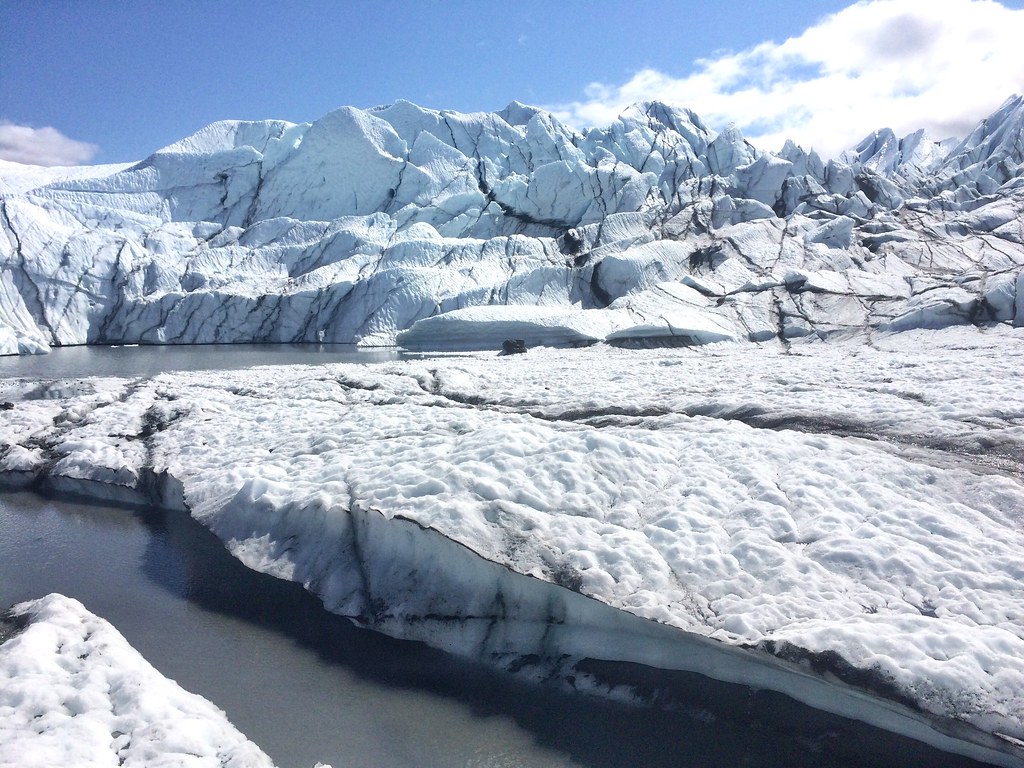 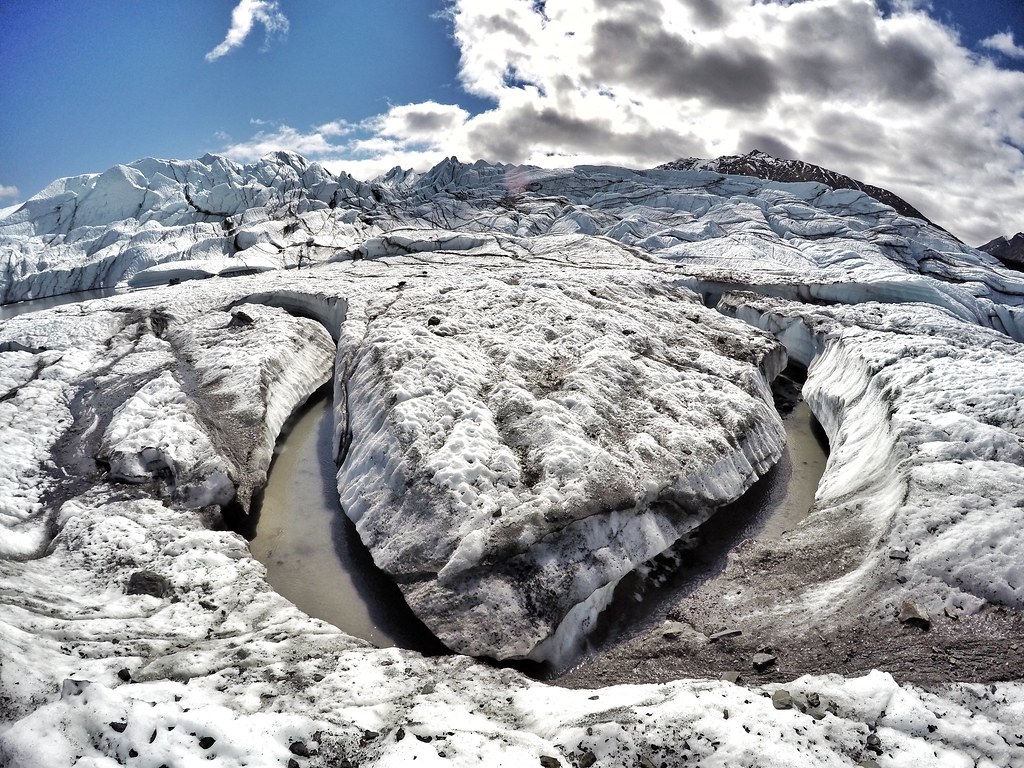 When we were ready to leave we tried taking a different route back and went towards a group of ice climbers. The ground we were on started breaking up with inch thick slabs on ice falling beneath our feet. They only dropped an inch or two but it gave us quite a shock after hearing the crash of an ice slab falling into the river behind us. Craig found some gravel to walk along which looked safer but he suddenly started sinking. He took another step and sunk even more, it was like quick-sand but he managed to dash back and grab my out-reached arm so I could pull him back to the slightly safer ice floor. We made it back in one piece and thoroughly enjoyed our adventure! The sun was shining and we had lunch with the stunning glacier ahead of us. What a cool day! 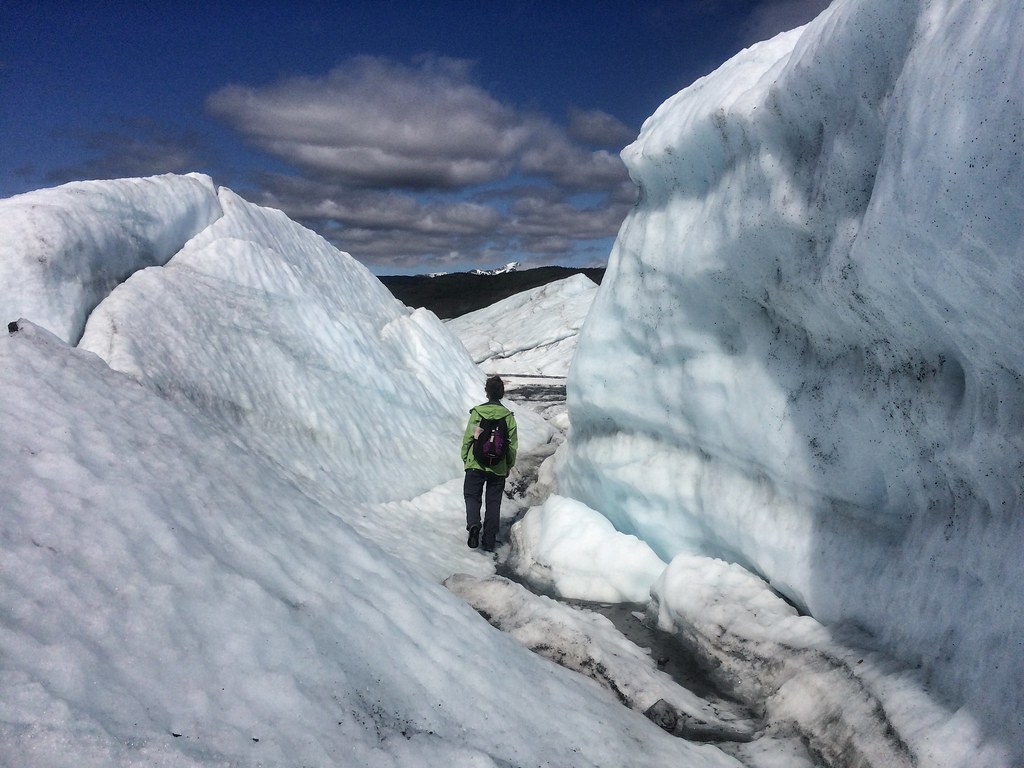 In the afternoon we continued driving along the Glenn Highway. It was a beautiful drive with vast wilderness everywhere, no villages but just the odd lonely cabin hidden amongst the woods. Sheep-Mountain offered a pleasant change of scenery with its sunset coloured rocks thanks to the iron stained gypsum in the earths crust. When we reached the first pass the land plateaued and lakes glistened beside the road. We decided they looked like a nice place to camp so headed down the dirt track. We were all on our own parked up on the shores of a lake and it felt lovely and remote. The sun was shining so Daphne was wonderfully warm inside but outside was unbearably cold in the wind. We’d filled up our solar shower with yellow lake water, including a couple of yucky worms(!) and ended up leaving it on the bed in direct sunlight in the hope that the winds would die down. In the meantime we watched an impressive golden eagle fly right past us and a moose trudging through the soggy marsh behind our van. We never did get to shower, the winds only got worse, the temperature seriously dropped once the sun ‘set’ at 11ish and we even woke up to a mix of snow and rain. 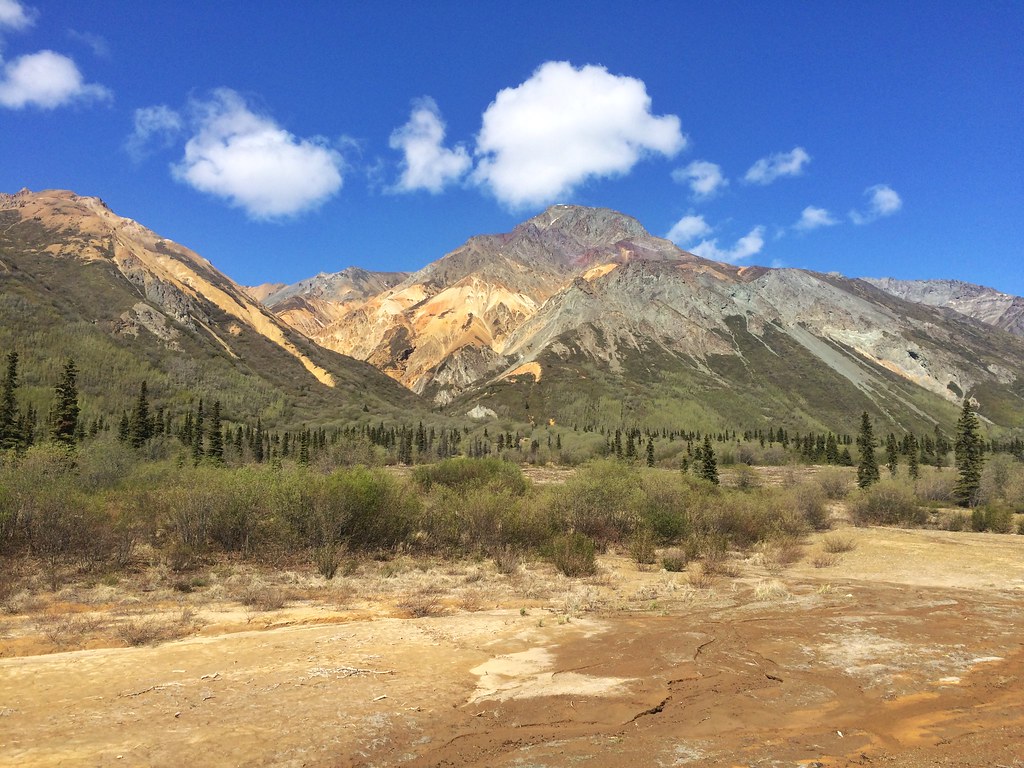 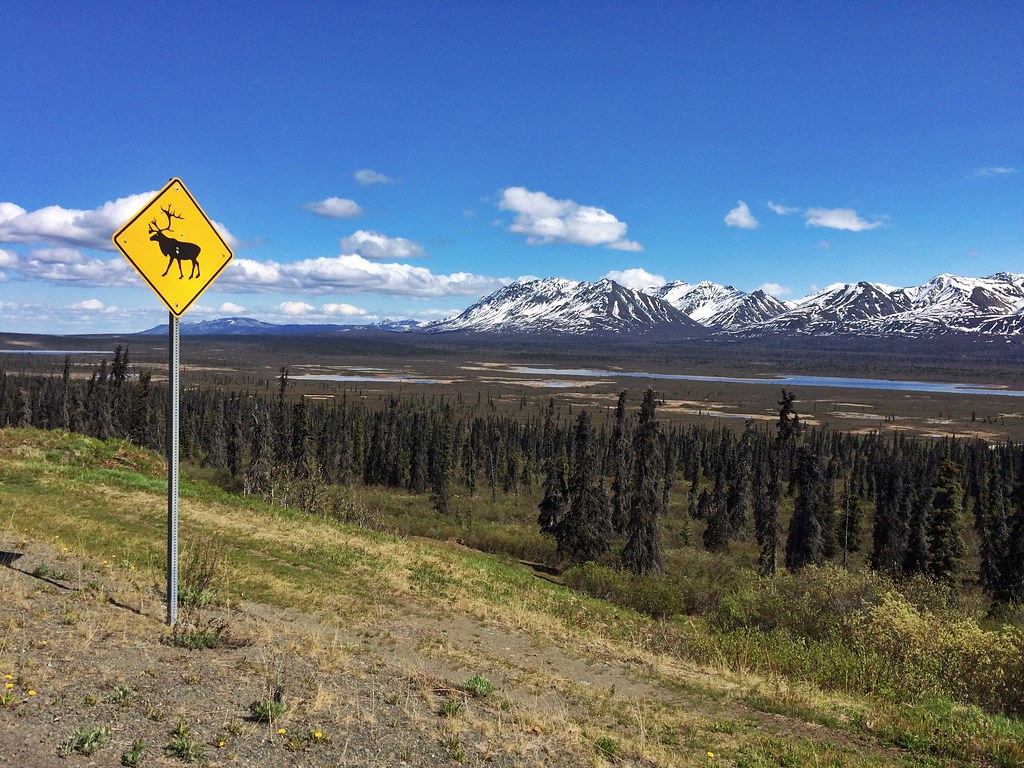 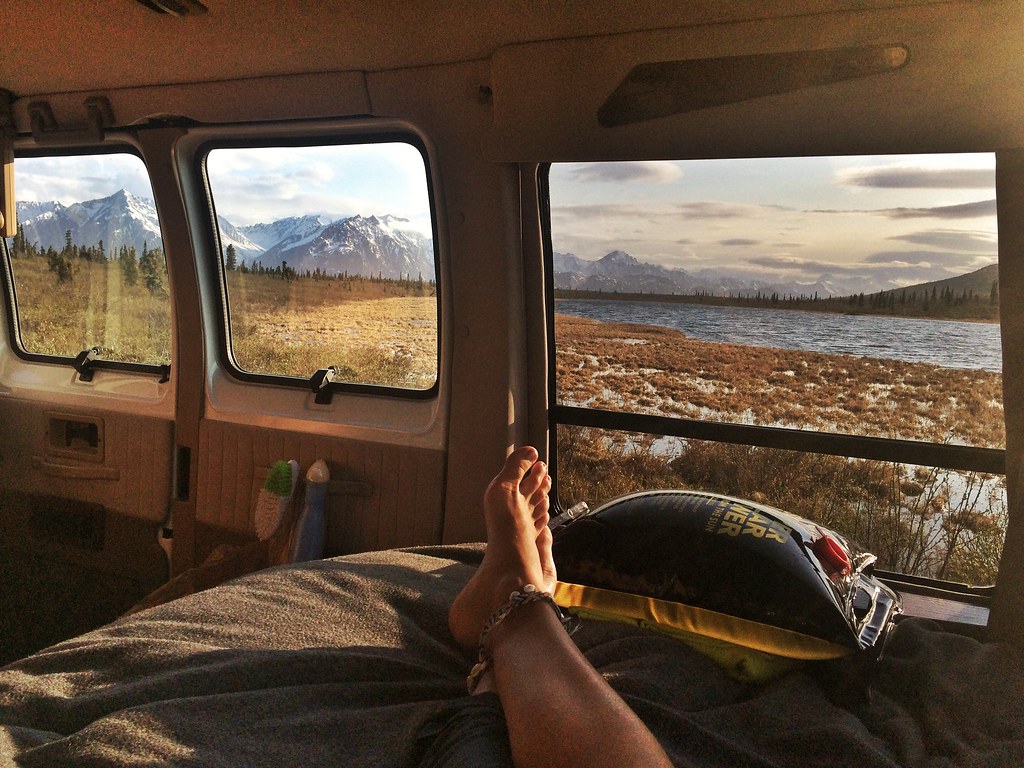