‘Warning: bold black bear stalked two dog walkers and was hard to scare away.’ Another day hiking in bear country and another very real warning. We’ve heard mixed reviews about black and brown bears and which one is more dangerous. It seems the browns, or grizzlies as their also known mainly attack due to being surprised, protecting their cubs or if your in their territory. But the blacks are pure hunters, they just wanna eat and will take whatever they can get. On the plus side the black bears are smaller than browns and we have been told to just give them a punch if they attack us.

It was a cloudy, drizzly day and we headed through dense woods uphill on the Twin Peaks trail. Halfway up we were rewarded for our efforts with a view of Eklutna Lake. It was a beautiful blue lake that had wiggly edges and curved around a mountainside until it was out of sight. A bizarre fog drifted around some areas of the water while clouds hung above the surrounding peaks. The view was really nice and that was the main reason we did this hike, for that very view, so we were talking about just heading back to Daphne. In the end we said we’d walk a bit further up and see how we get on. We passed an old bloke that we’d seen in the car park, he had filled his backpack with four gallons of water, four gallons!! He was having a break on a bench and we continued on past him. After a while we re-thought about heading back and sort of felt like we couldn’t now that this old man was doing the same hike with such a heavy backpack. So we persevered and I wasn’t best pleased as my mind set had all changed, we’d talked about going back to our nice warm campervan and having a good old British cup of tea, and now look at us – trudging up a hill through a valley surrounded by dense clouds and being battered by gale force winds. There wasn’t much snow on the surrounding mountains and the whole landscape (and weather) reminded us of Scotland. 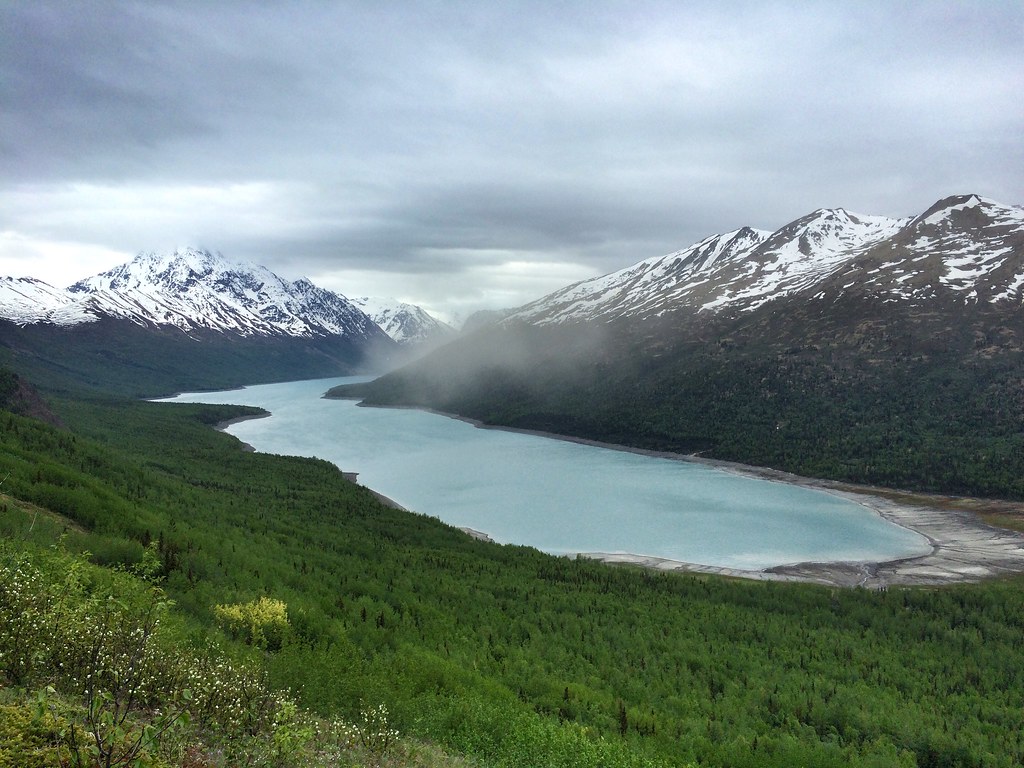 The trail narrowed as it climbed uphill and Dall Sheep were visible way up on a mountain ledge. It began raining, the wind chill was unbearable and all I could think about was that steaming cup of tea and chocolate chip cookies. Luckily Craig spotted some more wildlife to distract my thoughts, it was a moose with two calves standing on a snow covered ridge line. It seemed like such a desolate place to be but I suppose she had a birds eye view from up there. 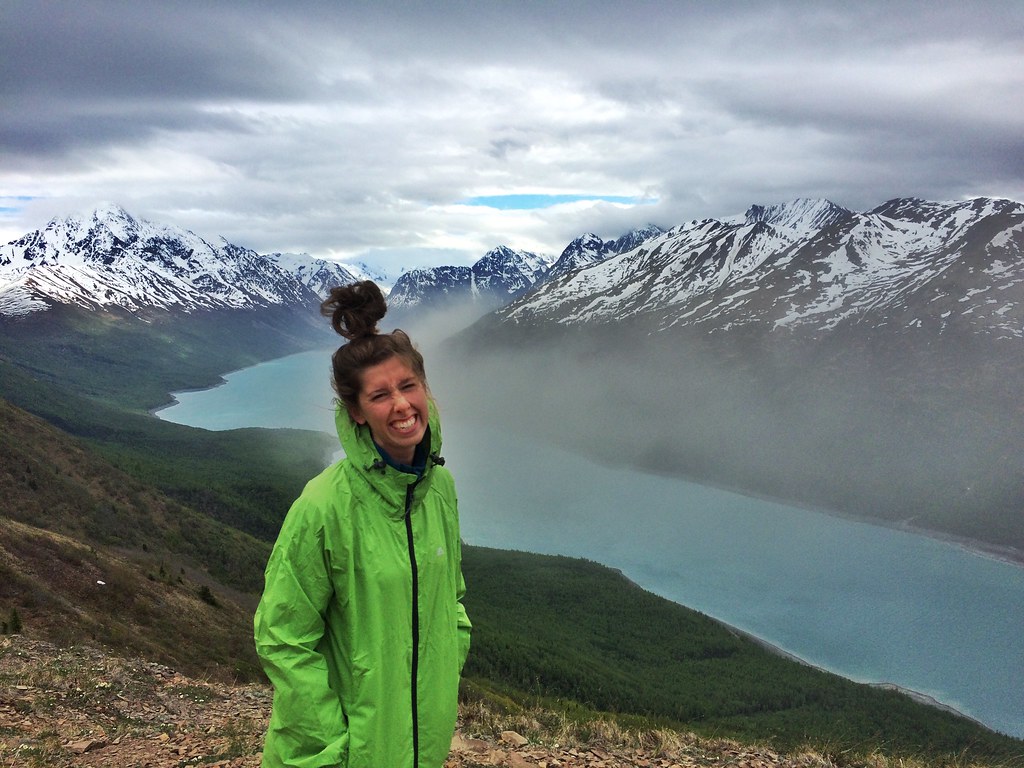 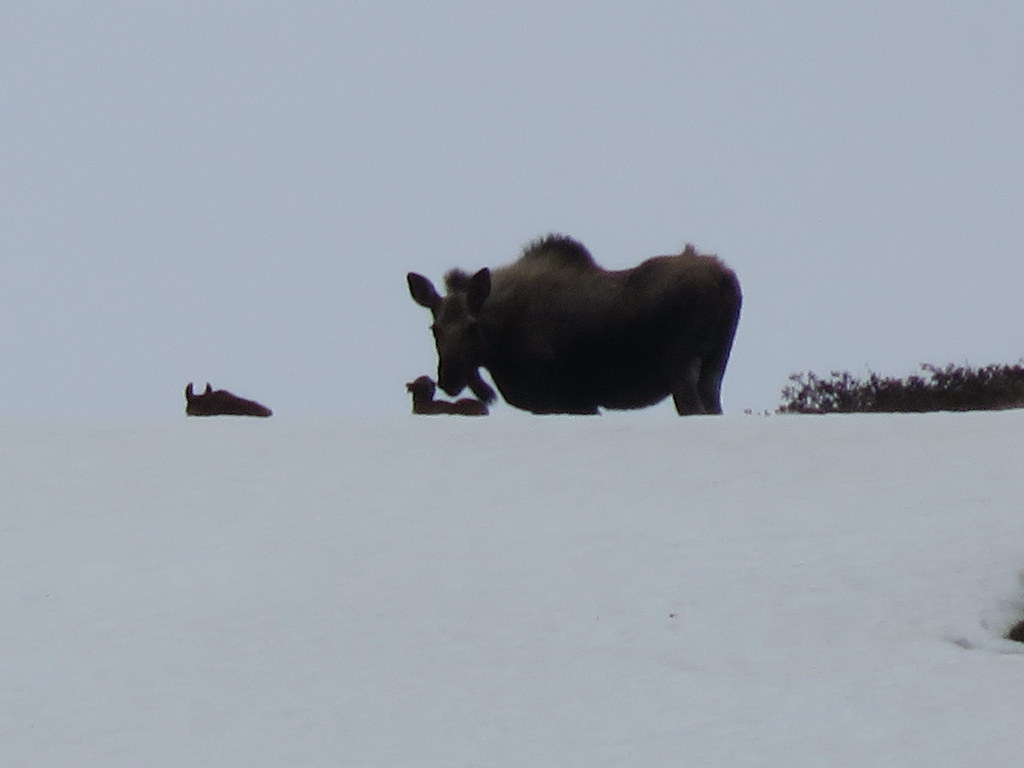 Finally we reached the top and had exactly the same view as we’d seen over an hour before, well, we could see more of the lake from up here but the weather had deteriorated so the view wasn’t as good either way. We found a very narrow and extremely steep trail leading down and decided to take that hoping it would join onto the original path. A man passed us which was promising and he made the most stupid observation about the noise of our bear bells “you trying to scare the bears away?” I was cold and pissed off and didn’t have a good comeback at the time so just said “yeah, something like that”. Then I spent the rest of the descent telling Craig a list of smart remarks I should of said back to him. “Yeah I am actually…Are you trying to get eaten by a bear by hiking silently on your own you stupid FOOL!!” Or an informative “Actually sir, scaring the bears is the last thing I’d want to do, I’m merely making them aware of my presence, maybe you should take a leaf out of my book….you FOOL” Or I could just screw it and be very sarcastic “I was actually hoping to entice some new singers to join the choir at my local church by dinging these festive bells, care to join?”. But alas, hindsight is a wonderful thing. I was furious when we got back to the car park and saw that the car belonging to the old guy with 4 gallons of water had gone already! Which meant he didn’t continue up the path and had just come back down, drank more water than is physically safe and driven home! Ah man, at least I had my tea though and an excuse for extra cookies. The next day we drove to Palmer, home to farm colony’s who started the Matanuska farming community back in 1935. There were three loop roads we drove around to look at some traditional farm buildings. We were actually pretty disappointed, there were hardly any interesting ones, but we did see a few and they were very picturesque with red paintwork, big silver vats beside them and the Chugach Mountain range as a backdrop. Weirdly we only saw one field of cows and no crops. I don’t know where they grow their food but we didn’t see any evidence except for a small plot owned by a reindeer farm. Where were all the sheep and cows? Do they just live off wild Alaskan food like reindeer, moose and salmon? Come to think of it farming in Alaska must be a right bitch with bears around. They’d kill your chickens and pluck fruit from your trees, it would be a nightmare. 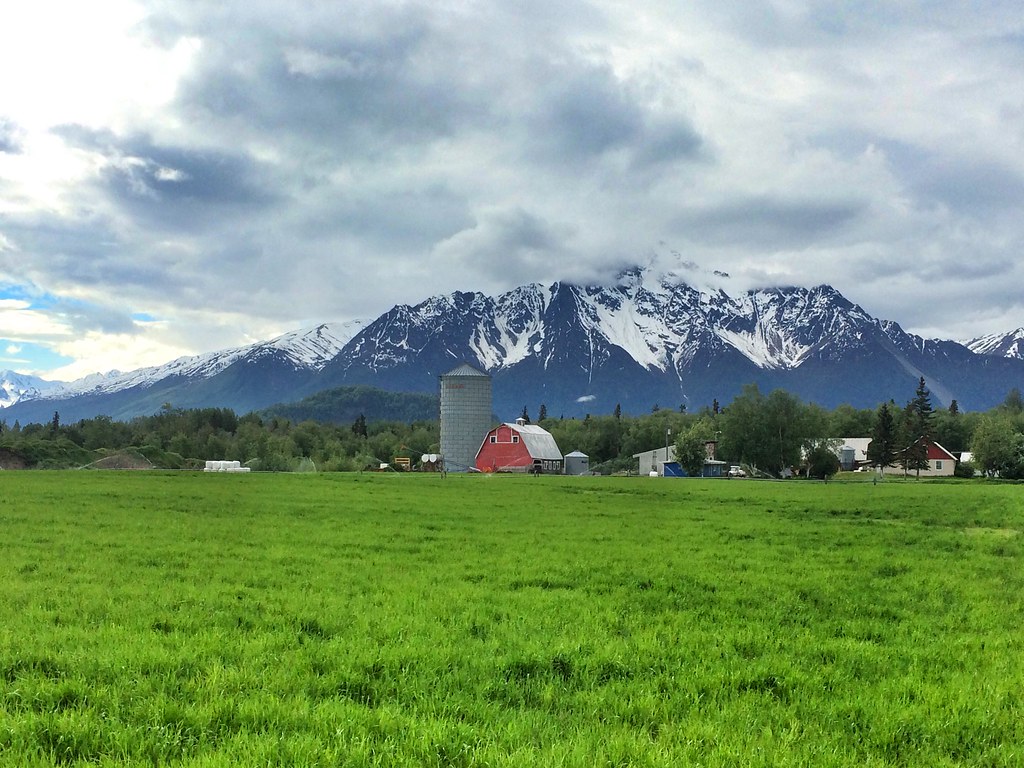 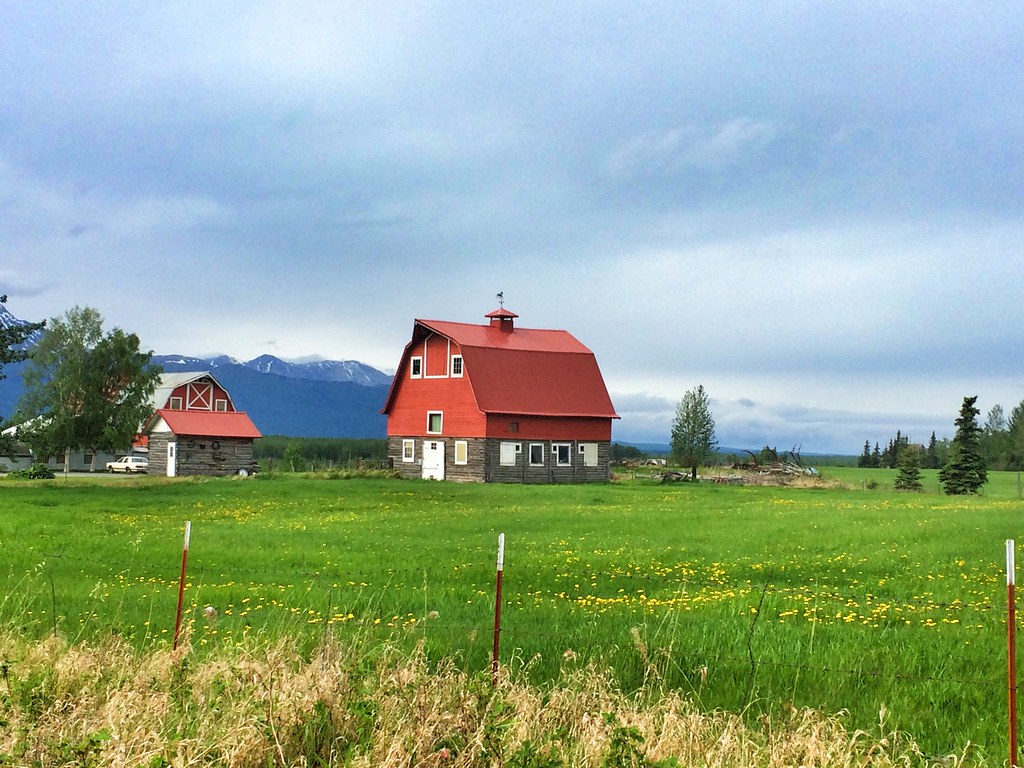 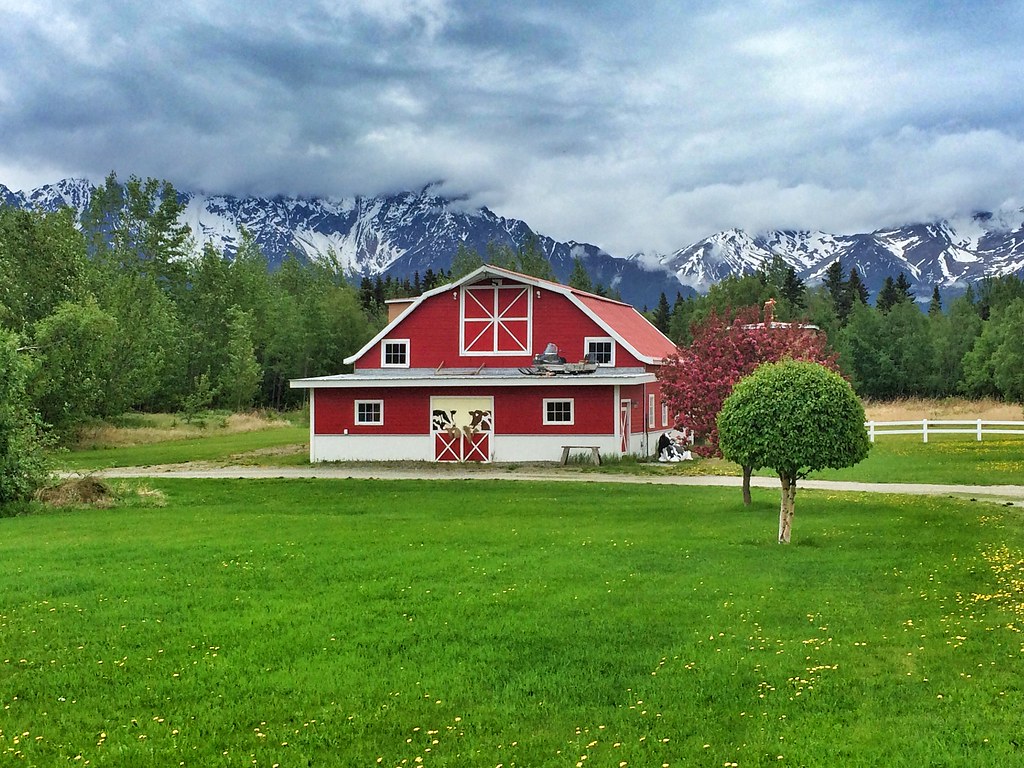 When we visited Hatcher Pass just north of Palmer the weather had really turned. It was raining and cold and we headed into the clouds as we gained elevation. The road over the pass was closed for the season due to snow but that was fine as we were there to see the Independence Mine which was a preserved 1940’s gold mine. We could see the buildings from the car park and set off along the road. It quickly became snow covered and my leaking boots began taking on water like they’d been out in the Sahara for a month and were desperately parched. There was dog poo everywhere, I don’t know if it was from bad dog owners or if the route could be used for dog sledding in winter and the poo is all being revealed as the snow melts. As we neared the mines Craig said we should head left up a hill so I followed him and just kept sinking in the snow. Snow flakes filled the top of my boots and I wasn’t a happy bunny. After sinking 2ft on every step I got mad and turned back to the trodden path where the snow was firmer and Craig headed uphill on his own in a huff. As I tried to get some solid footing on a nearby rock my feet once again sunk and I grabbed the rock and dunked my finger in dog shit. Oh for goodness sake! Three middle aged ladies turned up after I’d managed to bath my pooey finger in the snow and saw me helplessly standing on the only rock amongst the thick snow and took pity on me offering to go ahead and thread the trail down. So I followed these three ladies, watching them sink and fall through the snow ahead of me while I walked with confidence like I was on a snowy catwalk. At the top we could walk amongst the preserved ruins of a once-bustling mining camp. There were two bunk houses where the miners lived in small bachelor pads. The buildings were all made from grey wooden panels and had red window frames and doors. They made for a nice change of scenery against the bleak white background. Towards the back were crumbled old buildings and the mine itself with a beautiful wooden bridge for moving the gold around. The walk back however was as miserable as one would image. 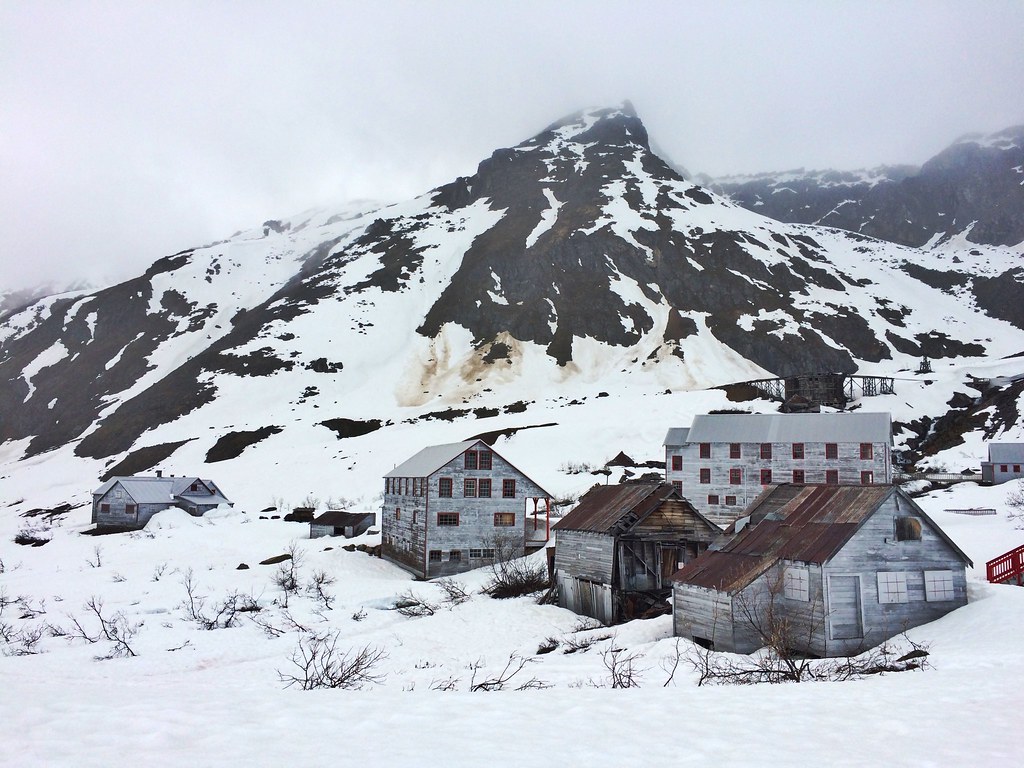 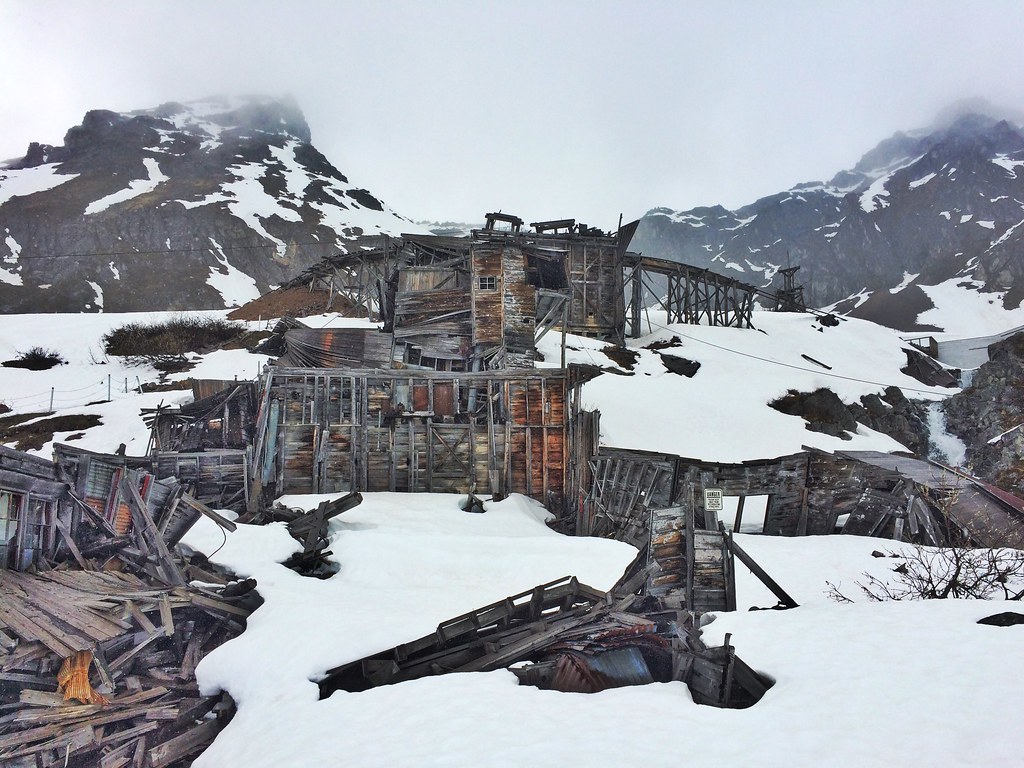 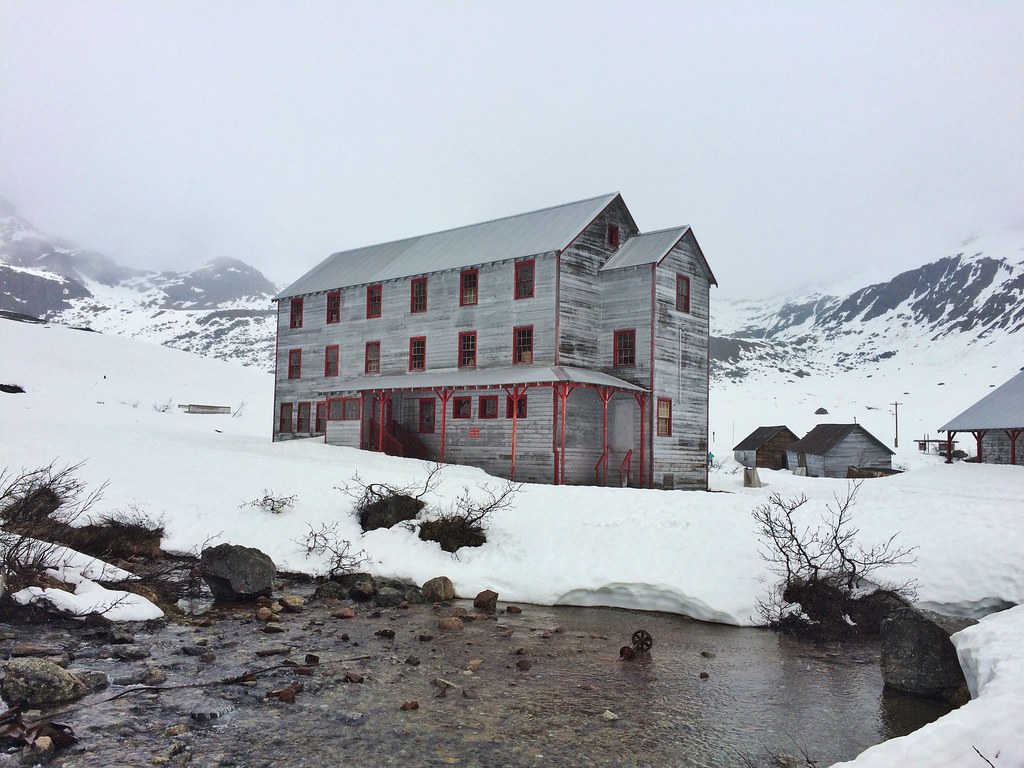