The Eagle River Road is 14 miles of beautiful winding tarmac through forest and past mountains till it abruptly ends inside the Chugach State Park. We drove to the end where numerous hikes leave from the Nature Centre. A sign warned us of a black bear stalking four hikers a few days ago and that he was very hard to scare away. So, off we went on a pleasant loop hike which mainly passed through forest. There were a few nice photo spots with mountain views and beaver dams and then we walked beside the river. Along the dusty trail were perfect bear prints walking our route. We followed them along in excitement and wariness until we came across a bear skat. Well, there’s certainly been a bear on our path. 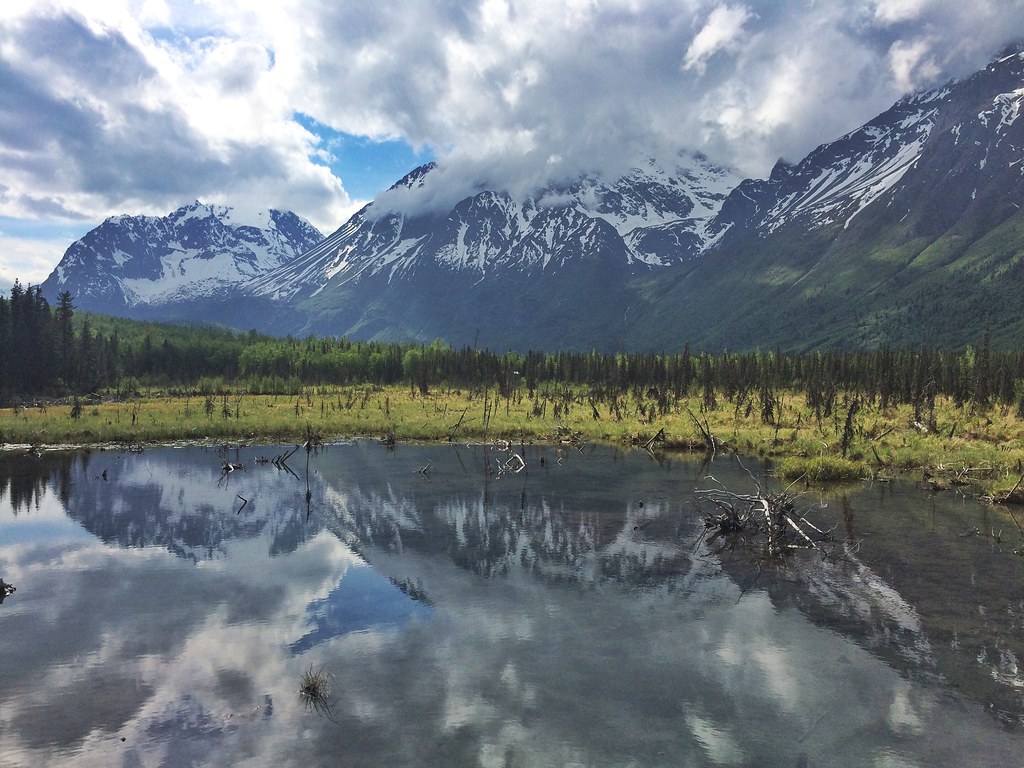 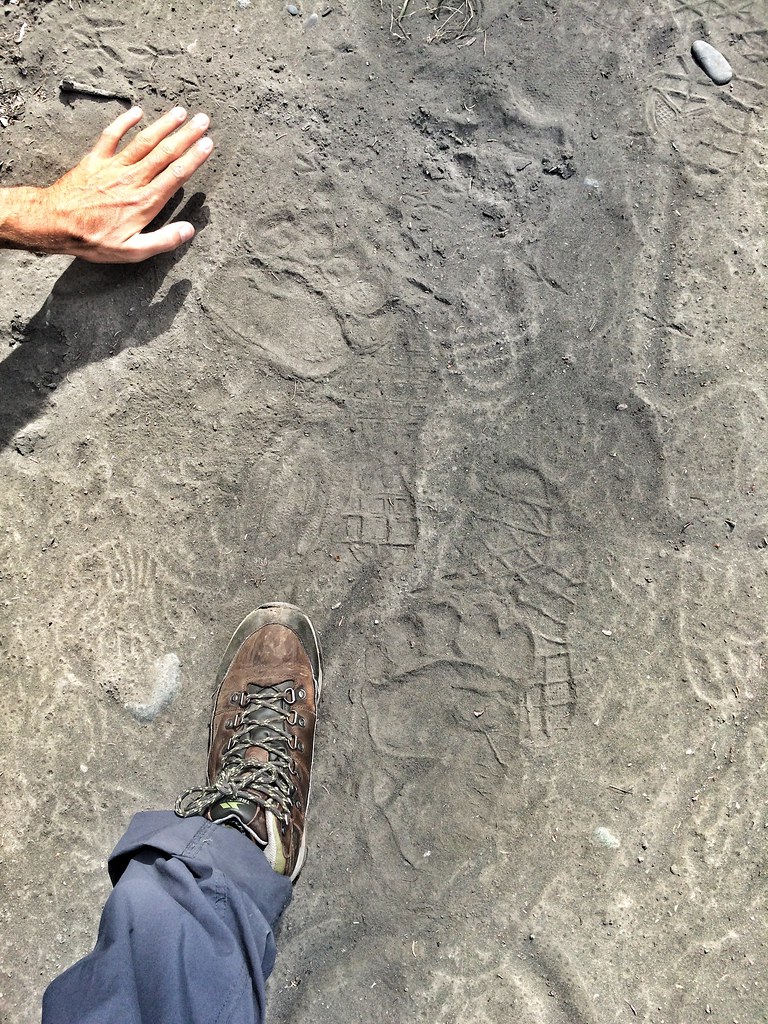 We continued on and ended up behind an old couple. They did a sudden dart to the right and had their binoculars aiming ahead. The lady called to us and said there was a bear so we scurried along as quick as we could without running. The bear was just by an intersection where two trails crossed. We could just see his derrière but then he turned and looked our way. He was maybe 30 meters away from us but we didn’t feel scared or in danger. The couple we were standing with were locals and were used to seeing bears and we all had bear spray on us. Amazingly the bear started coming our way and I was getting so excited, but we heard the rumble of an ATV and we all knew it would scare him away. As the ATV came close the bear sort of jumped back but instead of running away he resumed his spot. The quad bike came our way and we were pointing behind them, they turned and laughed, just a normal day as a ranger in Alaska I guess. 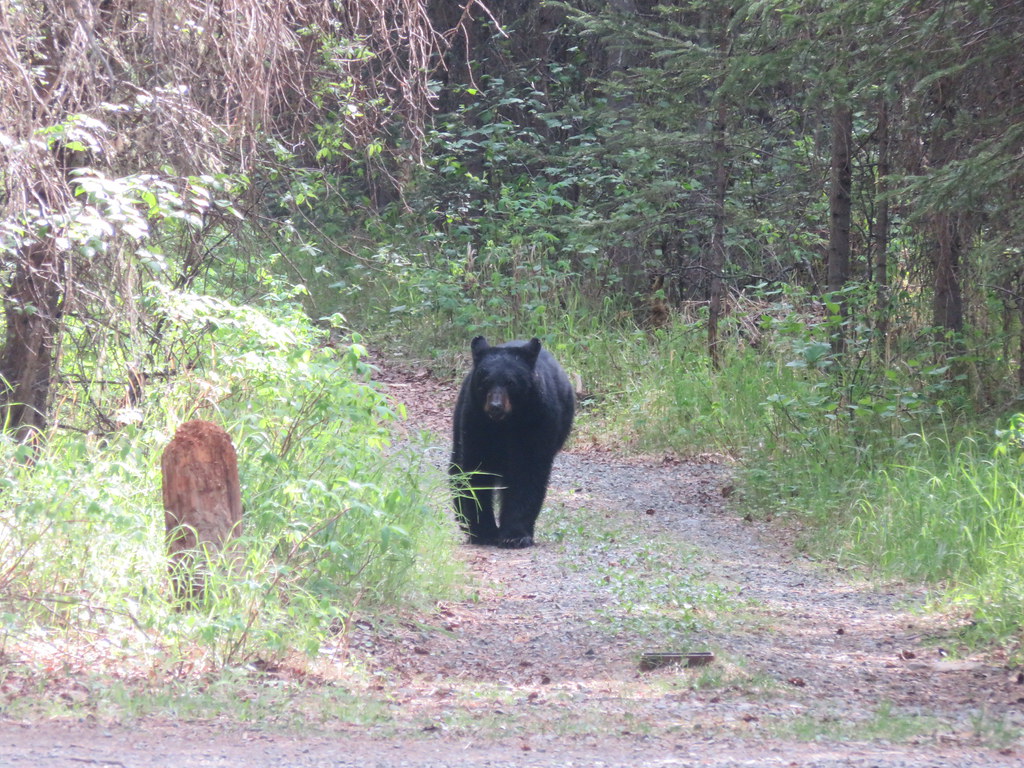 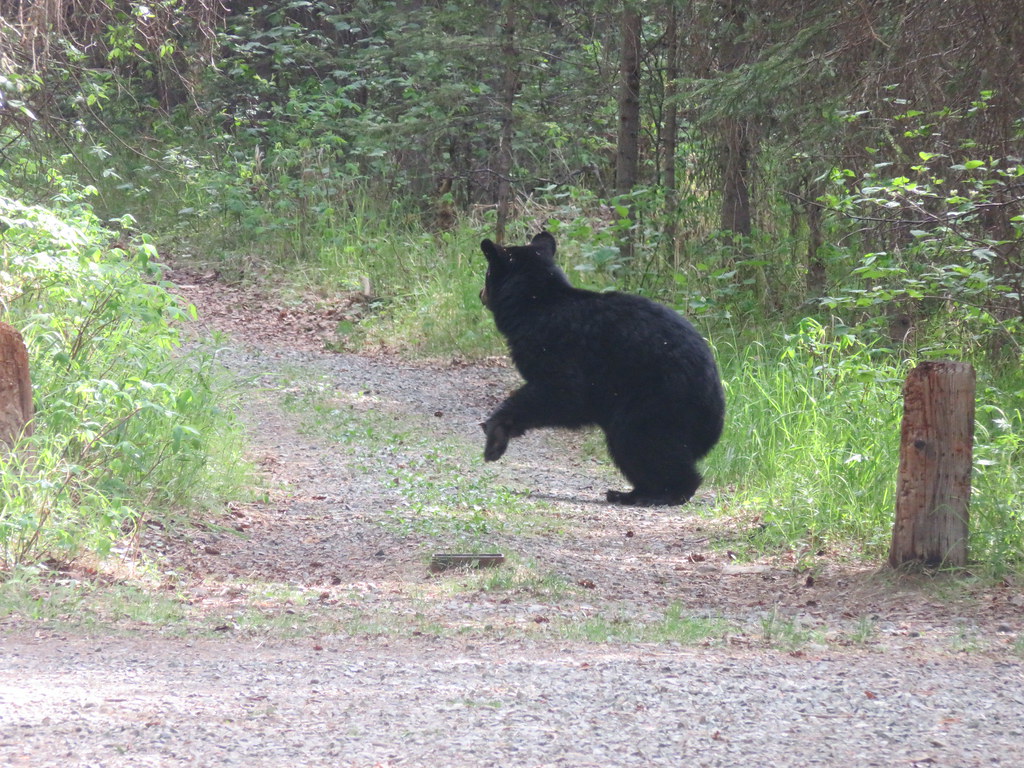 The bear retreated into the woods and as the ATV went back the way it had come the bear was super close to him in the woods and we heard the Ranger call out “Hey Bear”. It’s the standard phrase to greet a bear and let it know your a human, not food. We saw the bear dart again past the ATV and then he was gone. It was amazing to see one while hiking, and very rare, bears normally try to avoid humans so by using our bear bells or talking loudly they will know we’re coming and they can move off. Craig made an interesting point; imagine if the Bears mind-set changed, what if they associated the dingaling of bells with food…”hear that Berty, that’s food coming our way, and if we’re lucky they’ll have that delicious peppery condiment made specifically for our enjoyment!”

We were so happy with our bear encounter and continued hiking around the park while looking for more evidence. We were told a grizzly and three cubs had been seen in the park and we did actually find what looked like three mini bear poos, all very close like they were all syncing.

We’d left the solar shower on the roof of the car so after our hike we drove to an empty car park up the road and managed to have a wash. We finished up and I was just drying myself outside when I heard heavy steps in the woods near us and quickly got Craigs attention “Craig that’s gotta be a moose or bear coming our way!!” We only had to wait a few seconds before a big grizzly bear came through the woods just 10 meters ahead of us. Holy moly! We couldn’t believe our luck. We grabbed our cameras and filmed him walking along a trail in front of us. I was shaking with excitement but not scared in the slightest, although they can move super fast (and we could see that just in his big strides) we were right by Daphne so it was an ideal encounter. 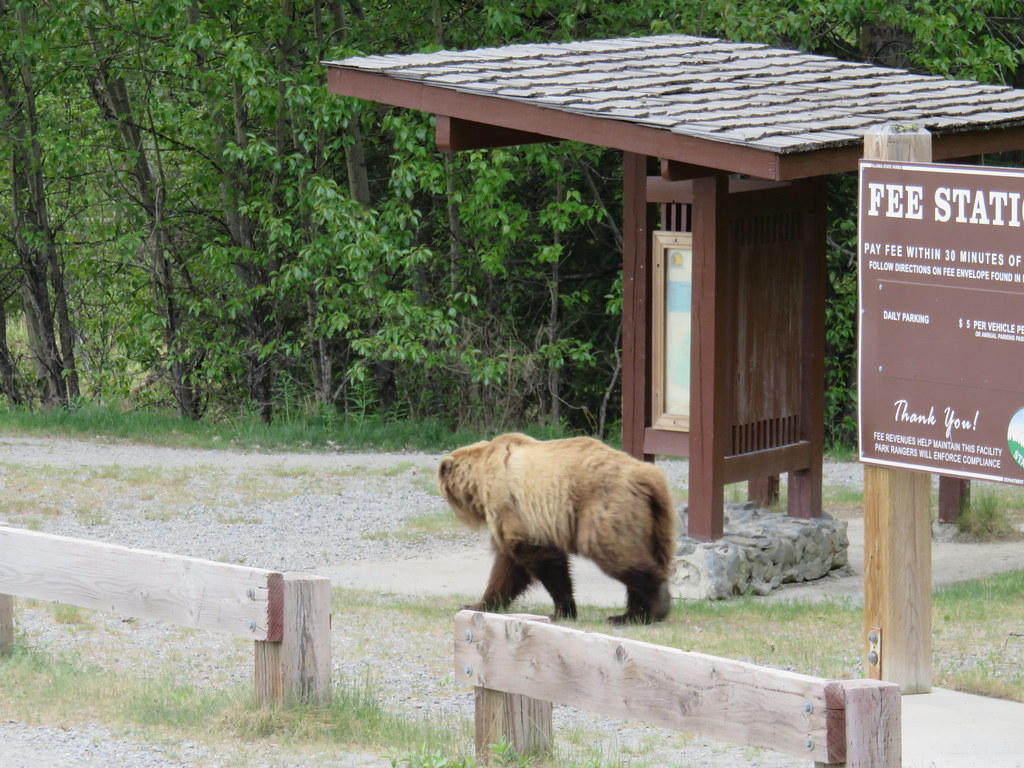 The grizzly didn’t pay us any attention, he turned his head a couple of times and checked us out in his peripheral vision and continued on his way. It was funny watching him walk with so much purpose and ignoring us, like he was breaking a rule and doing what old people do by ignoring calls to say your not allowed in that area or something. His mouth was open ajar and a very prominent, sharp tooth was visible, just a polite reminder that he’s not a friendly teddy bear. 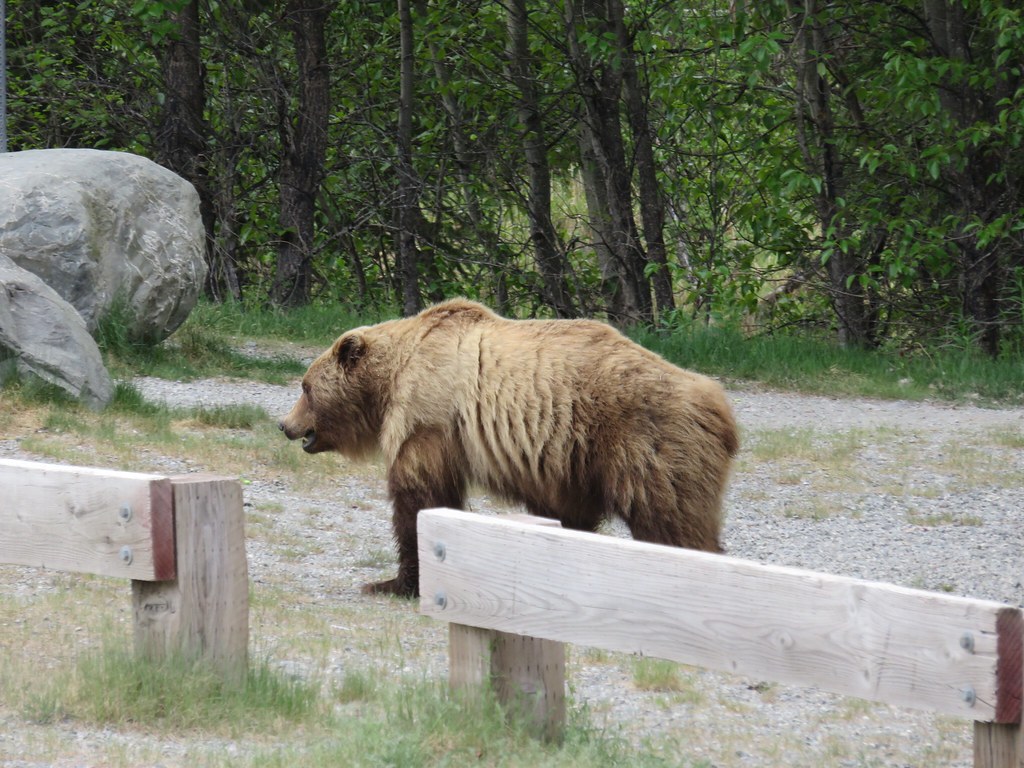 When he went down the hill out of sight we drove along and had a peak down the path. Maybe the engine noise spooked him as he waddled away quickly down the path and didn’t look like an intimidating grizzly anymore. Three cars turned up in quick succession, two were dog walkers and one with a baby in a pram so we let them all know there was a grizzly along the path and they all looked down the trail and reevaluated their afternoon stroll. We were absolutely over the moon with our bear encounters, both were close but safe and it was incredible to see them in the wild. We felt like we were on a roll and decided to head back to the park for another hike….after finally getting dressed that is! We certainly didn’t expect to ever encounter a bear, let alone a grizzly while in our towels!!

The afternoon stroll didn’t offer any wildlife but we went to a couple of cabins you can pay to stay at. They were beautiful log cabins in the woods with basic wooden planks for sleeping. When we turned to leave we spotted a handmade person was hanging by its neck in front of the door. It was made of sticks and vines and had a note attached saying something along the lines of ‘this motherfucker is cursed’. It was pretty creepy actually, like we were in the blare witch project and the woods felt particularly eery on the walk back, creaking and leaning in the wind.

We stopped to admire a moose in a marsh on the drive out and a friendly local pulled up for a chat. He told us a black bear and three Cubs have been breaking into his garage and eating his dog food. He got bear bins and a reinforced garage door and the bear managed to rip up the bottom of the metal and still get in!! Anyway, he saw her everyday and would have to wait till the garbage truck pulled up by his house before he took the rubbish out as she’d go for it. The other day she stalked him taking the rubbish out and when he went back to the house the bear had managed to bite his dog and was just 6ft from him, at which point he shot her in the shoulder. Man I hate hearing that but at the same time I’d probably do the same if my dog was in danger. His dog was fine in the end with just a small puncture to the leg and we enjoyed stroking her and she loved the attention. The bear survived but is probably living with a broken shoulder now. He said he has neighbours who have shot and killed over 20 bears!! I get that they can be a problem but equally it comes with the territory; your living in the wilderness, aka the bears backyard and I think houses, storage etc should be bear proofed from the beginning so bears never associate it with food and both can live in harmony. 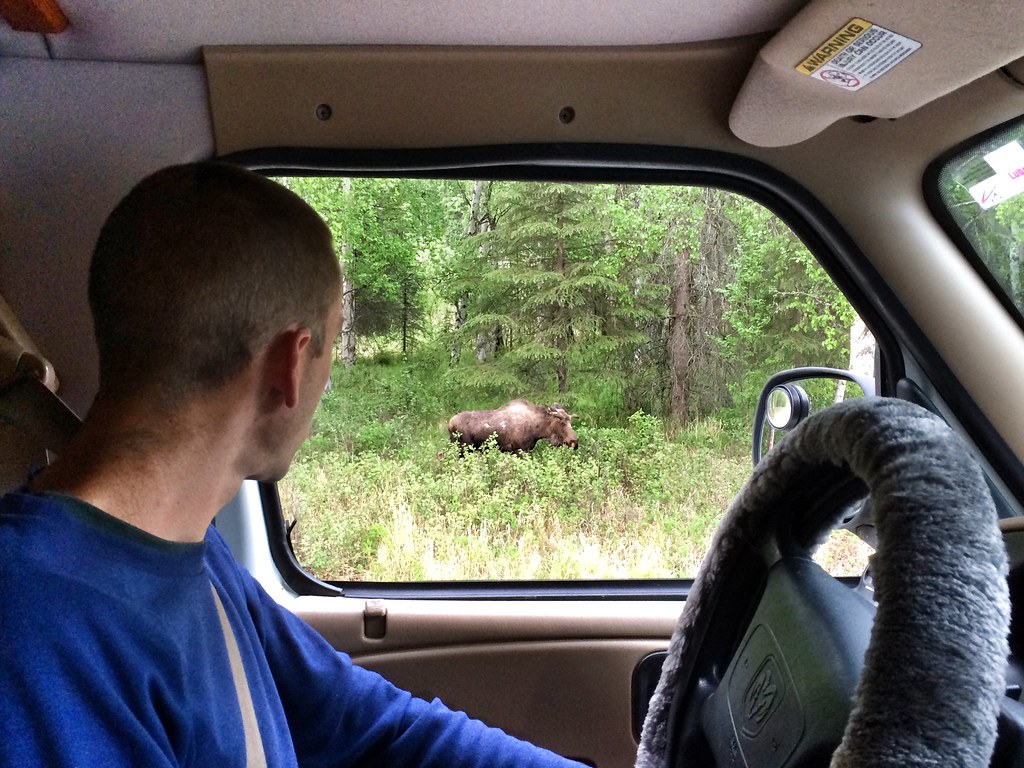 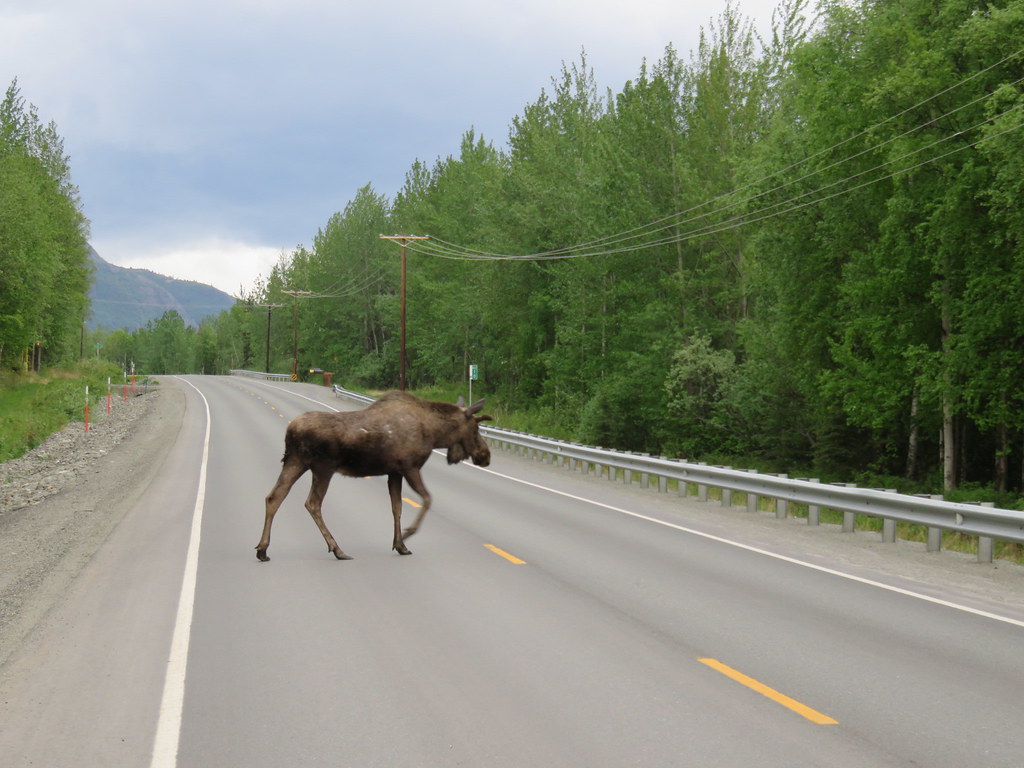 We stayed along the road again and had a moose cross the road near us, when he got to the metal guard rail he had to lift one leg at a time and it was hilarious to watch, he clanked every hoof on the metal causing a loud ‘Ching’ sound in the silent wilderness. 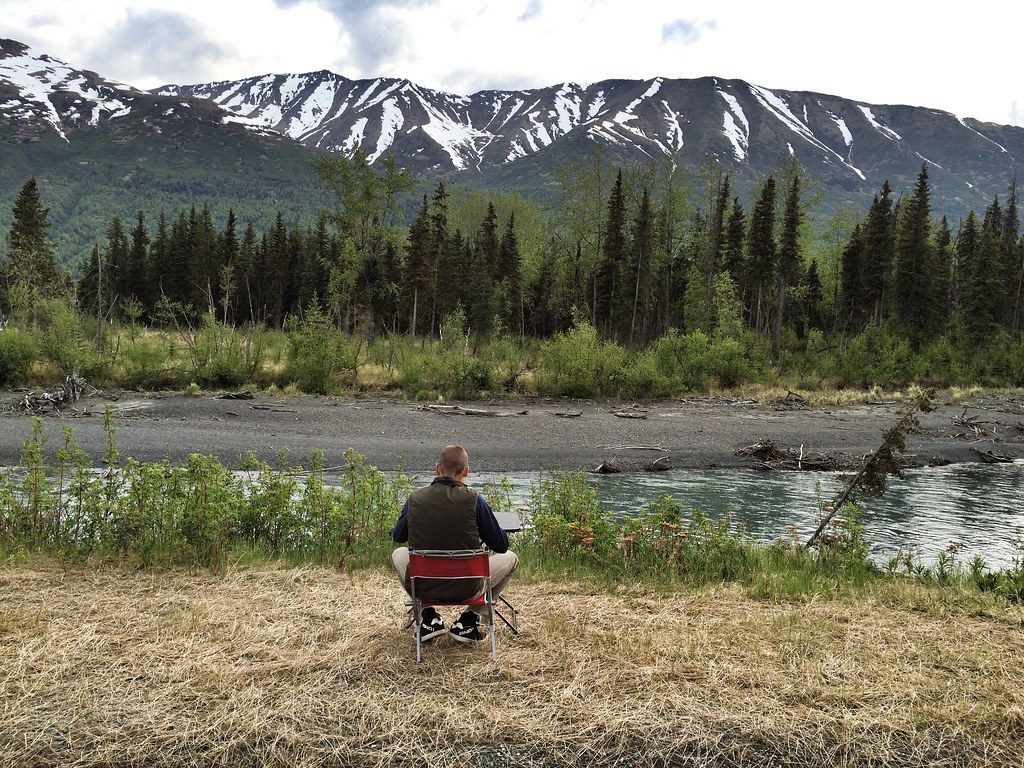