We drove up and down the highway, past marshes, meadows and forest looking for wildlife and a nice spot to stay but we only found the latter. When we set off in the morning a moose was hanging out in the marsh beside the highway, hooray! We pulled over to admire her and she started walking into the pond, then running until it became too deep and she started swimming through the water. It was awesome to see a moose swim, I didn’t even known they could do that. She looked like she wanted to cross the highway though and we didn’t want to be responsible for a crash so we headed off. 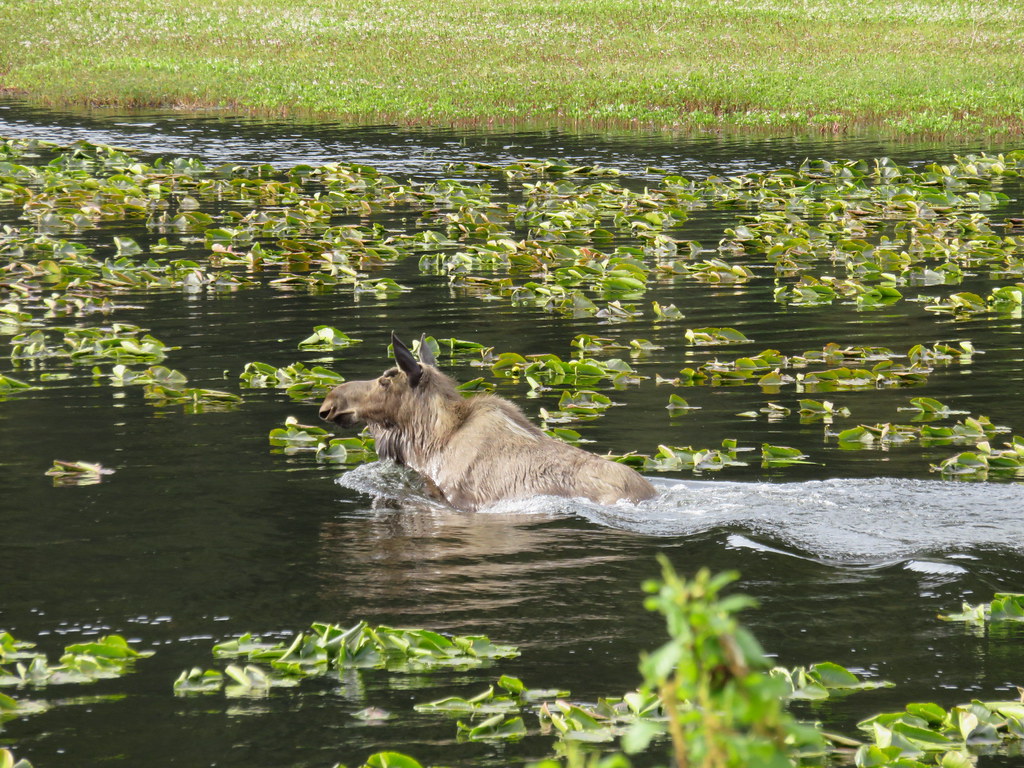 Before we went back to Anchorage we stopped at the Wildlife Conservation Centre in Portage. We got free tickets with our whale tour so were excited to check out the rescued animals. The friendly staff said we could either drive or walk around the park so we opted for a bit of both. The moose were the first animals we came across and there were three males eating right beside the fence. They were just beginning to get their velvety antlers for the season and seemed rather un-phased by us standing so closely and taking lots of photos. They were in such a picturesque setting with lush green grass, a red barn behind them and snowy peaks in the distance. 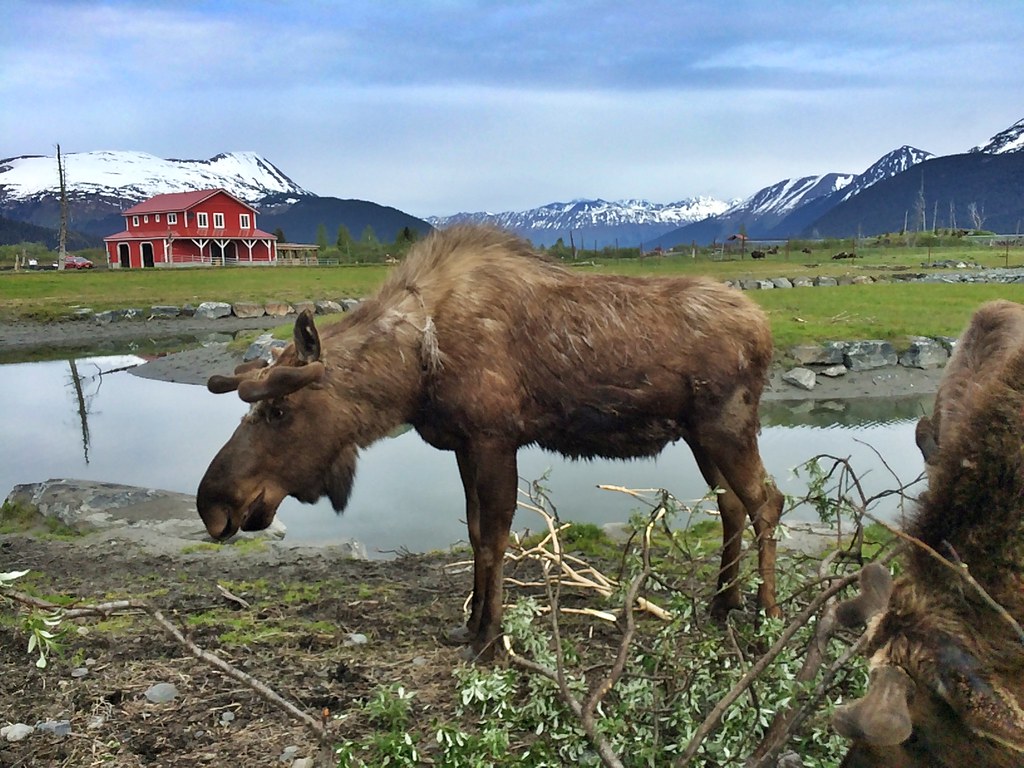 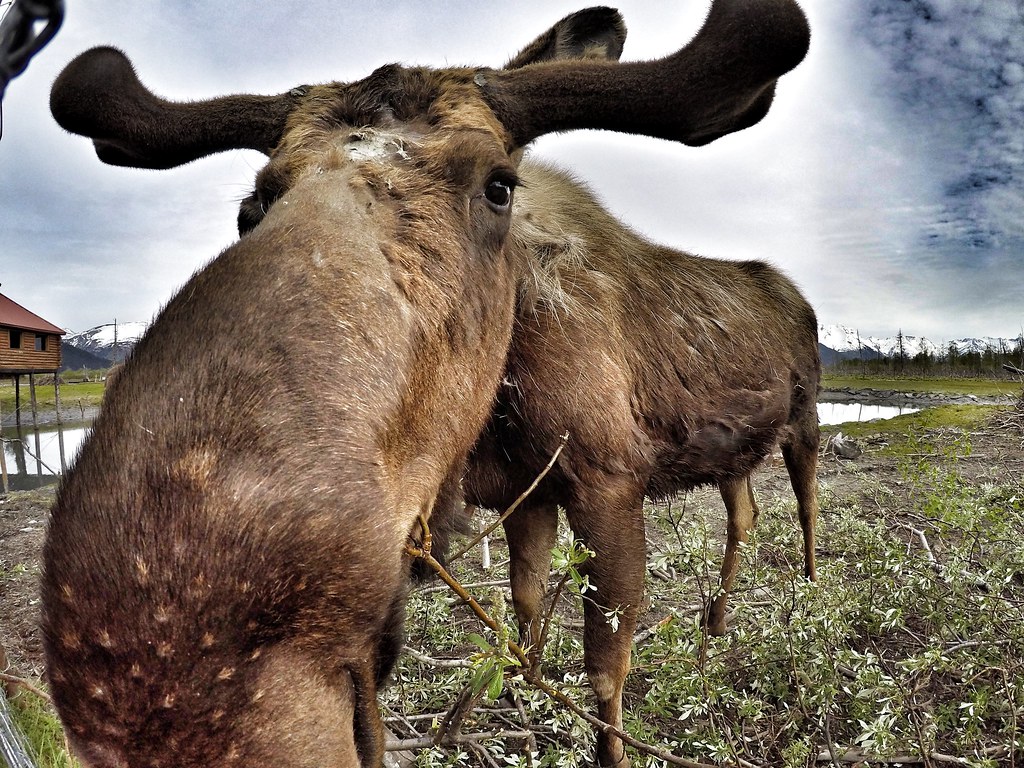 The caribou and elk were playing hard to get and being very lazy so we continued onto the brown bears. Three sweet bears were walking the grounds of the biggest bear enclosure in Alaska. They were all rescued and each had a sad story to their names. One called Hugo was found as a cub weighing only 3 pounds, covered in porcupine spikes and no mum in sight. It’s so sad to hear stories like that and because he was rescued as a cub he’ll never be able to go back into the wild, in fact he’s part of the family at the centre being there for over a decade. One girl was walking alongside us on the other side of the fence while the other girl was being very adorable; she was resting in a mini log cabin style kennel with a grassy roof. Her head was just out the door and she was probably day dreaming about what lay beyond the fence line. 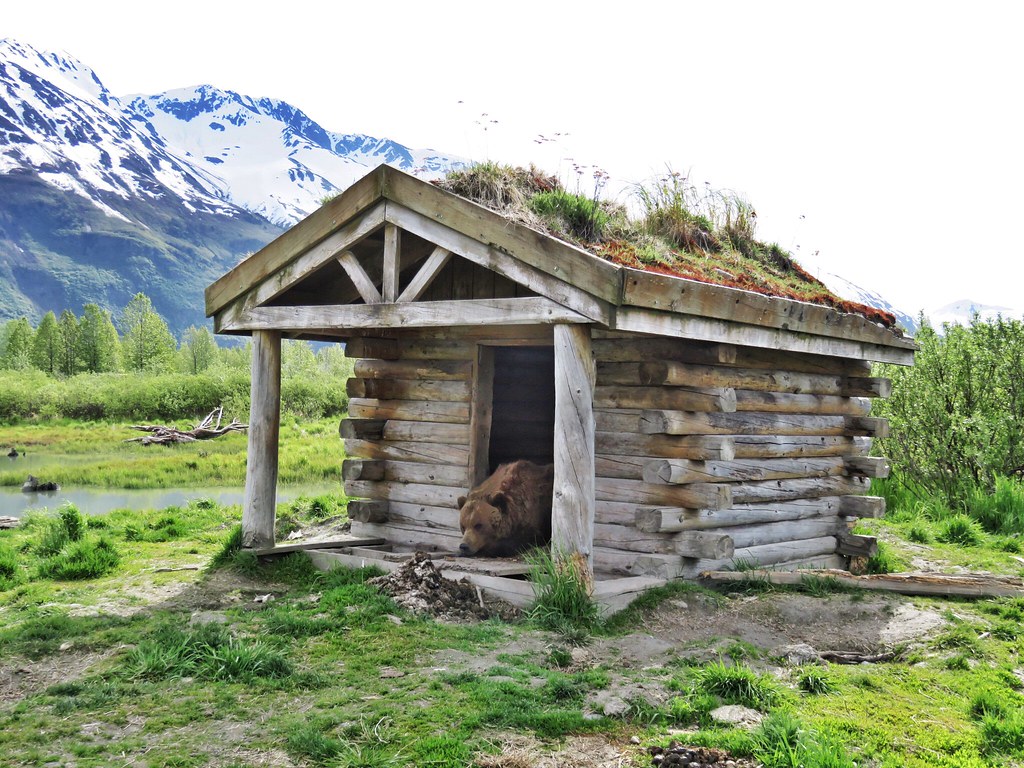 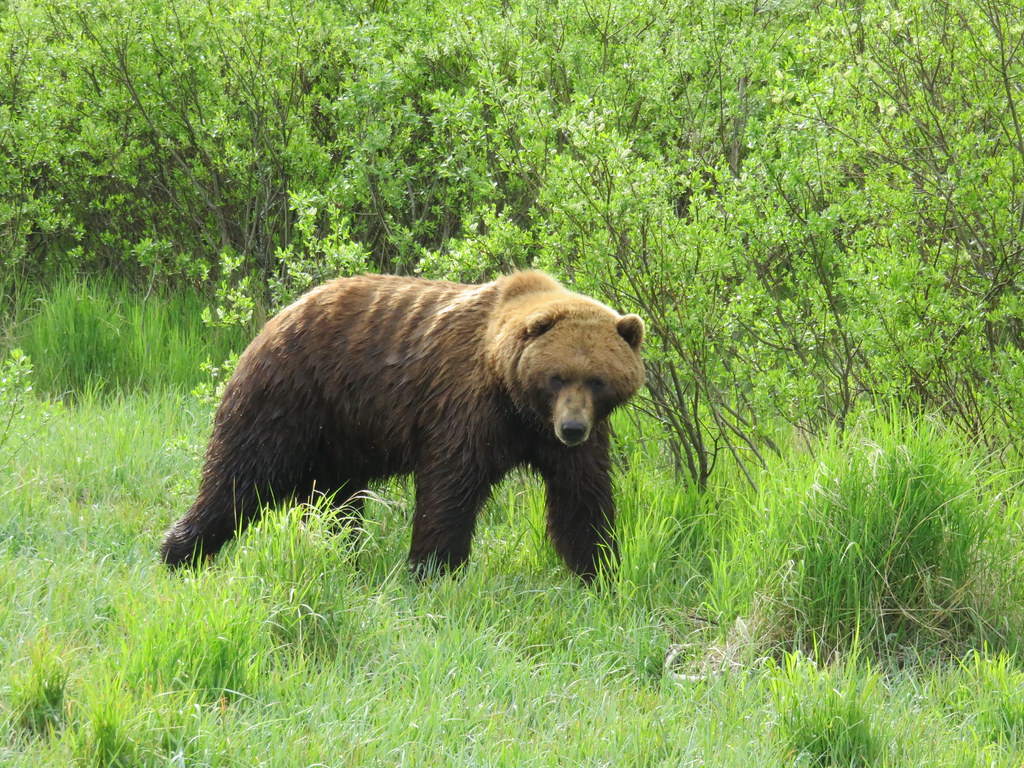 There was a herd of bison, it used to be a lot bigger but they put part of the herd into the Alaskan wilderness to try and get them to breed in the wild. The musk oxen’s looked similar to bison in that they were giant animals wrapped in dark brown fur. The humongous hide and skull of a rescued one was in a barn. He’d been the leader of the herd for a long time, constantly fighting off other males and continuing to be the main man around town. But his last fight finally came when he charged another male, for the first time he walked away afterwards and gave the trophy to the newcomer. The head on collision proved to be fatal and he died later that day. The skull showed a crack that went from the front of the skull all the way to the back. It was crazy, but apparently a common way of death with male musk oxen’s. 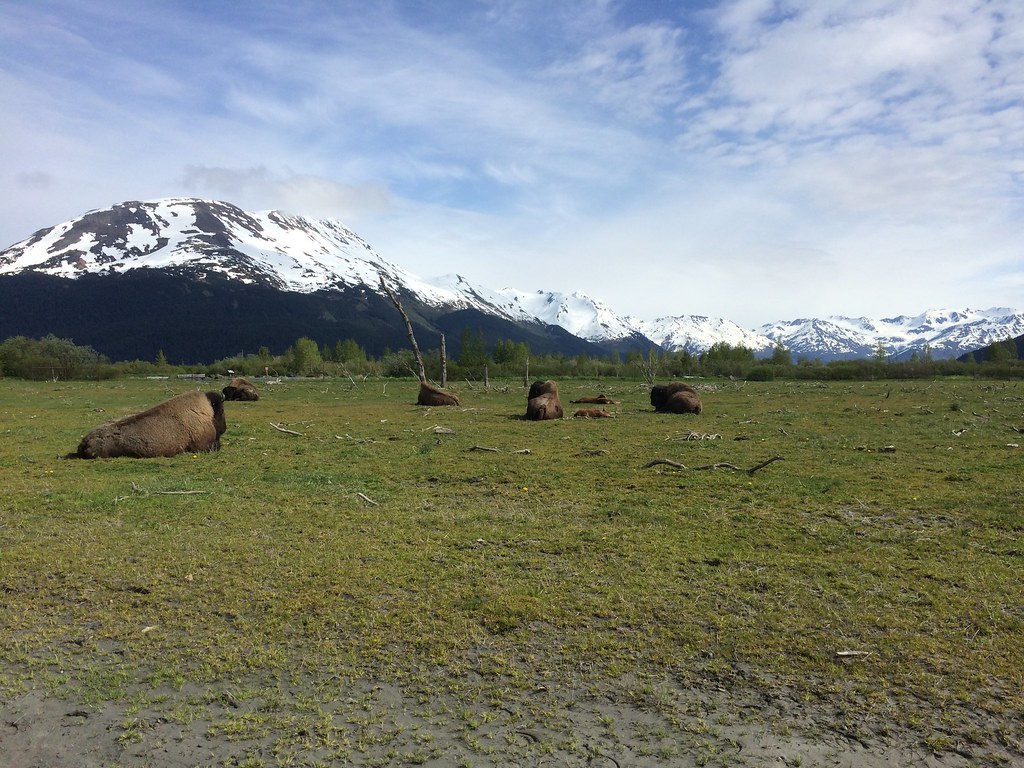 The black bears were hiding in tunnels but we read their adoption papers. One had been found wandering around downtown Juneau as a cub without her mama. The other had been found crying in a hole in someone’s back yard. Nearby a small pen had a lone porcupine wandering around. I find porcupines very ugly and uninteresting but the rescued one here made me feel pretty bad about that opinion. He was found with a trap around his foot and had been walking around with it. The poor thing had to have its foot amputated but he’s since learnt to walk using his tail to help balance himself.

We made it back to Anchorage and except for doing another food shop, we had a major issue to sort; Daphne’s shocks. She really really hated any dirt roads we drove along or even bumps along Tarmac. A horrible metal clank would sound underneath and made us wince every time. It was something we had to get fixed so we went to the dodge services to get a quote. It took nearly two hours for them to take her for a test drive, establish the issue and get a quote for the parts. Eventually they told us it would cost $240 so we just went for it, we’ve had such bad experiences with garages that we just wanted to get some professionals looking at her. They really struggled to get the old parts off and the hour labour we’d been quoted turned into three hours and we were dreading the bill at the end. We were stuck in the waiting room with a Donald Trump fanatic. He was a total racist and wouldn’t stop talking. He also told me about how he carries a massive gun across his chest when he goes hiking for bear protection and how his friend had been attacked by a bear. I’m starting to see a pattern with everyone’s bear attack stories now, they have all been hunters, silently stalking animals and clearly startling bears, either that or we’re underestimating the intelligence of bears and their on a mission to get back at all the hunters for killing their family.

It was a horrible wait but much to our surprise the bill was the original price and we even saw a phrase on our bill saying ‘what we quote is the price you’ll pay’ thank god for that! It was still a lot to pay but she’s driving a treat now. The young mechanic even removed our rear seat belts which have been getting in our way and now we’re ready to head north.