Before we left beautiful Seward we did a hike in the Caines Head Recreational Area. We crossed a clear river and walked along seaweed up the coastline, scanning the bay for sea life but we didn’t see anything which was a shame. The mountain views were beautiful but it wasn’t the most riveting of hikes and after seeing the whole of Resurrection Bay the day before on a boat I think we’ve become a bit spoilt. 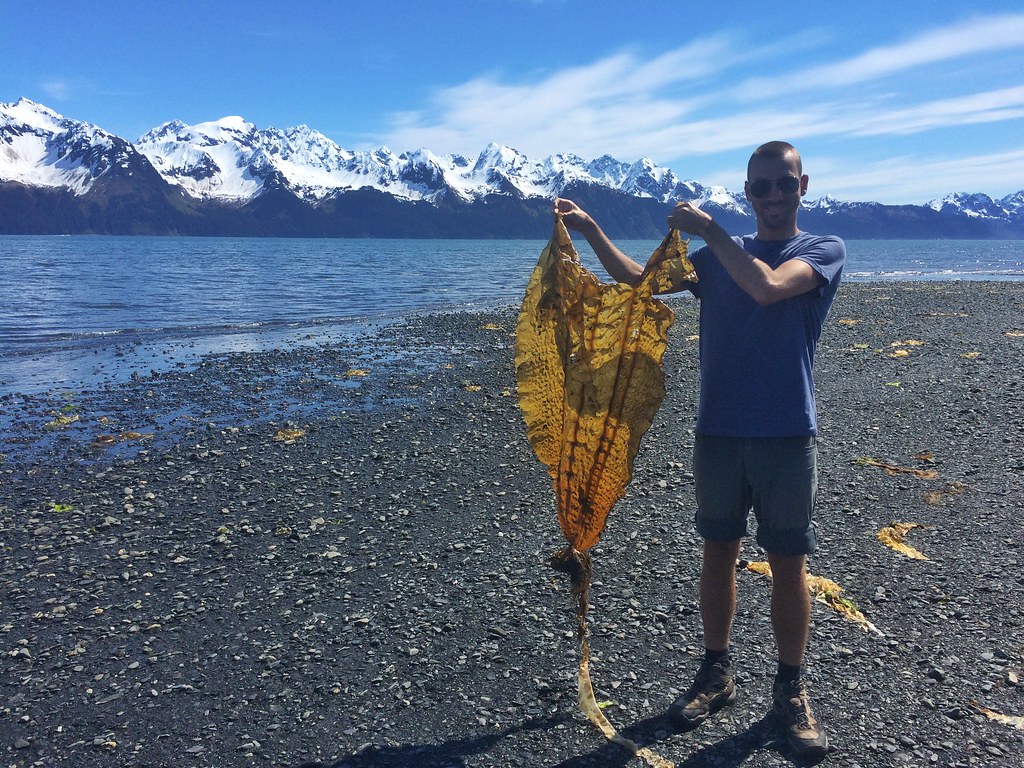 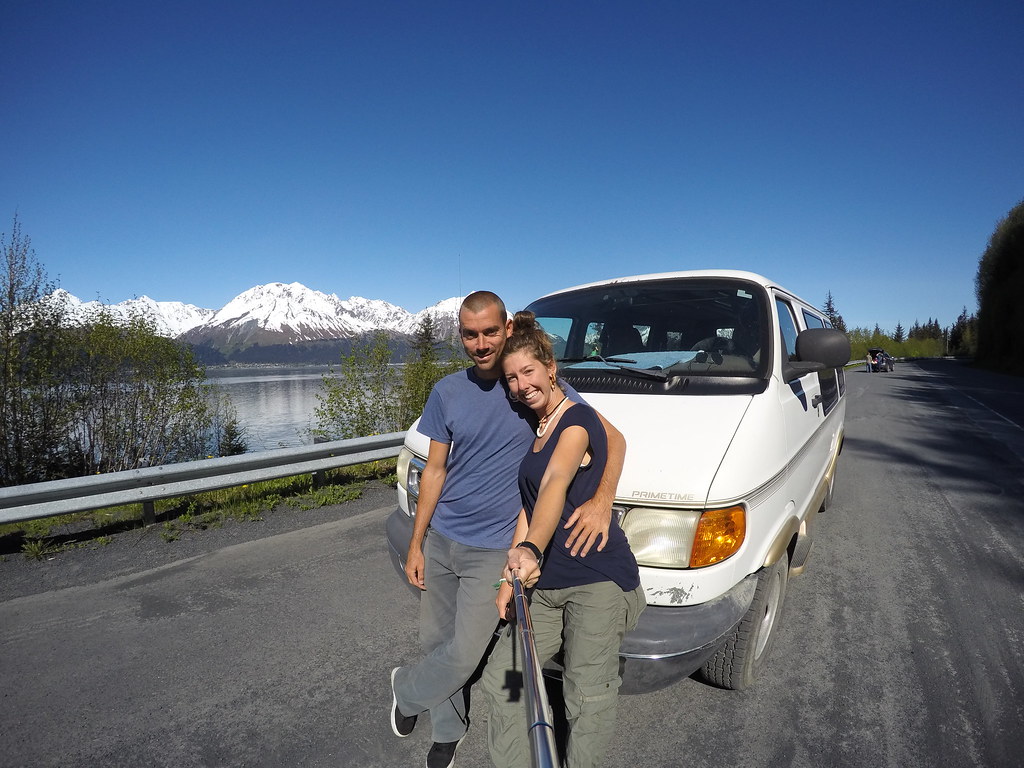 We wanted to do some hiking along the Seward highway while the weather was still dreamy so we set off under deep blue skies. The drive was spectacular and we stopped frequently for photos; Lily Pad Lake was a beautiful stop with totally flat waters that reflected the snowy peaks. 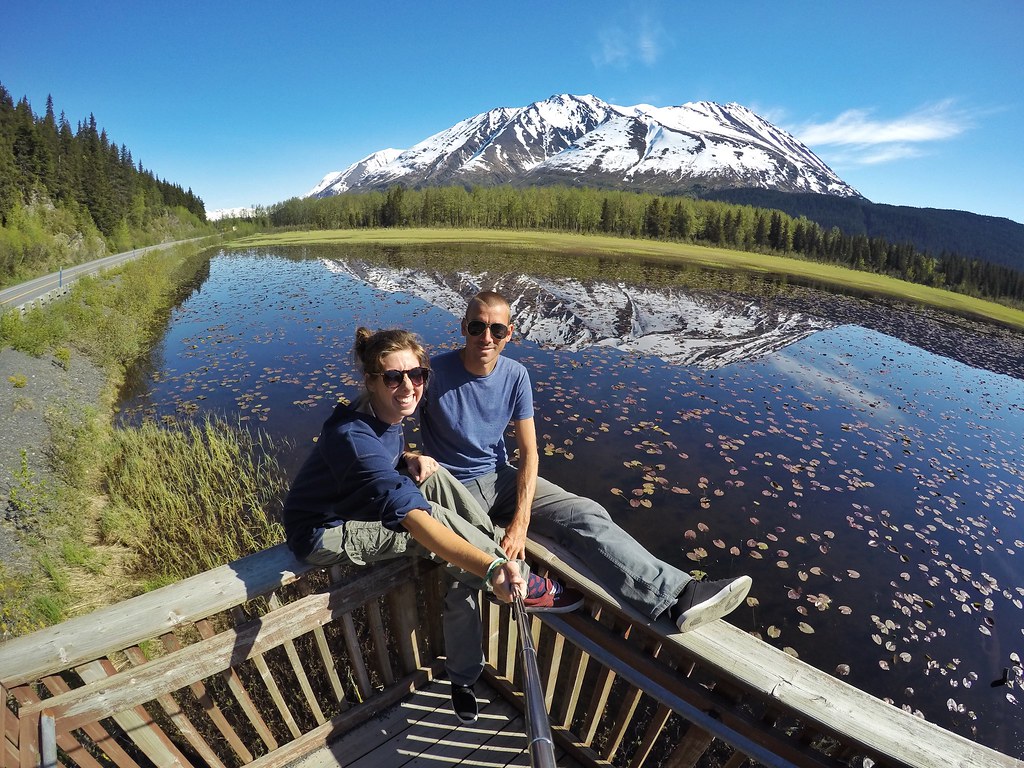 We picked the Ptarmigan Lake trail and it proved to be quite the catch. It was 3.5 miles one way and steadily gained elevation. We followed a fast flowing river through forest and the path soon opened up with big vistas across the valley. Signs had warned us that bears frequent the trail here so we kept our bells ringing the whole way. Craig suddenly raised his arm up in army code style, like I had to stop silently. So I did and he just looked down in disappointment at my slow response. Craig had stepped in a very wet, fresh, bear poo and I was currently standing right in it. Further along was a much healthier looking scat. There was certainly a bear around this area. 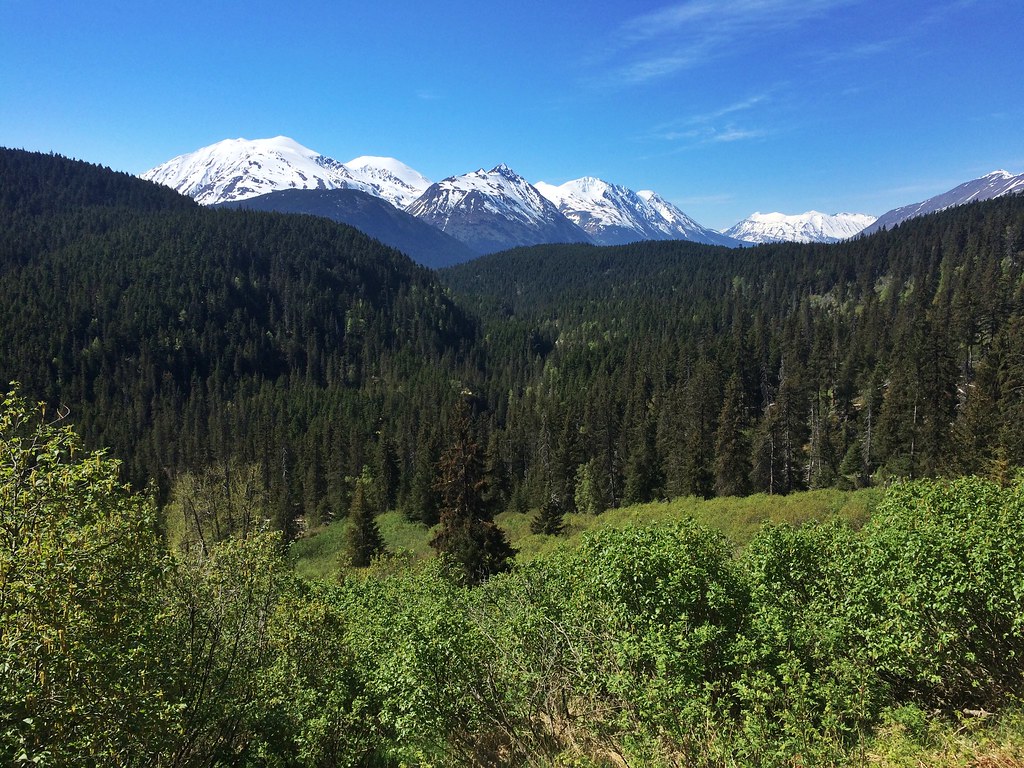 We eventually spotted the lake and had made it there an hour quicker than the sign had suggested. Craig went to use the loo at the lake and called me over straight away, “Lauren, you gotta see this!”. It was the coolest wilderness loo, ever! It was the usual pit-loo style except it had no walls, no door, nothing, just a toilet surrounded by woods. Amazingly it had a fresh loo roll beside it too. I think an ‘Occupied’ sign at the bottom of the trail would be a nice added touch though. 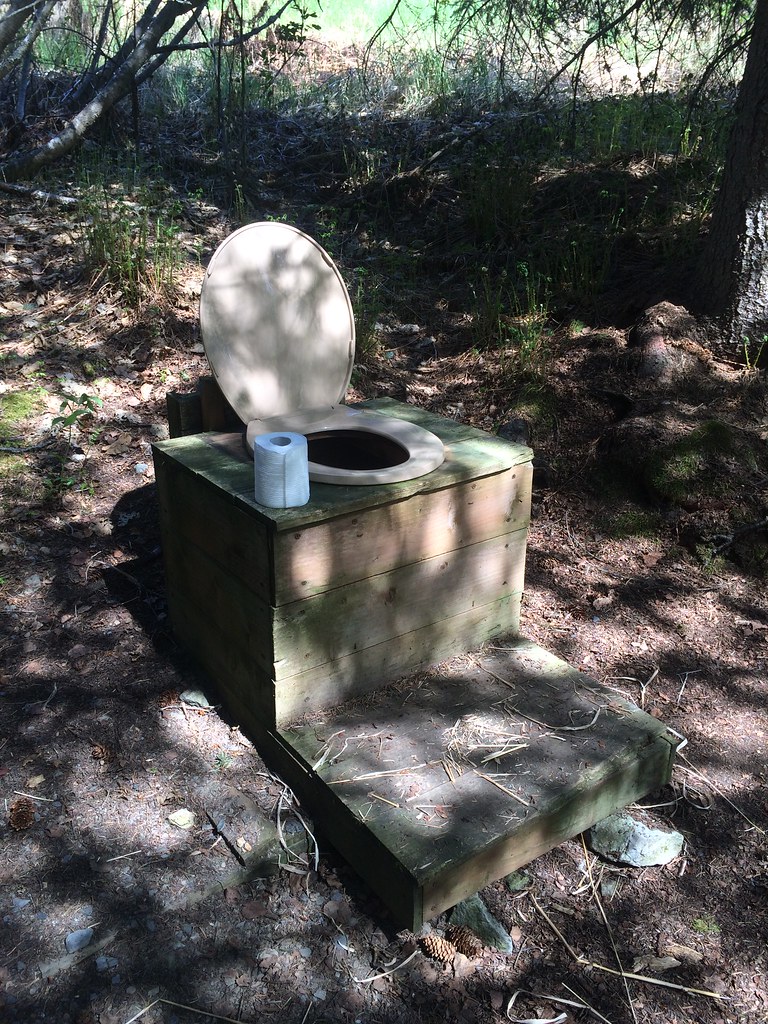 We continued walking around the lake looking for a nice spot for lunch. The trail deteriorated from here and a narrow track led around a small peninsular with constant twigs poking us and clouds of mosquitos swarming around us. It opened up to a large rock which doubled up as our seat and an entrance into the lake. It was such a beautiful lake, the water was crystal clear, turquoise and not even that cold. We were hot and sweaty and rather tempted for a swim so Craig tested his feet first and within 10 seconds deemed it far too cold and got the heck out. We enjoyed our lunch with a very stunning view, it’s the prettiest lake we’ve seen so far in Alaska and the trail was so nice and peaceful. 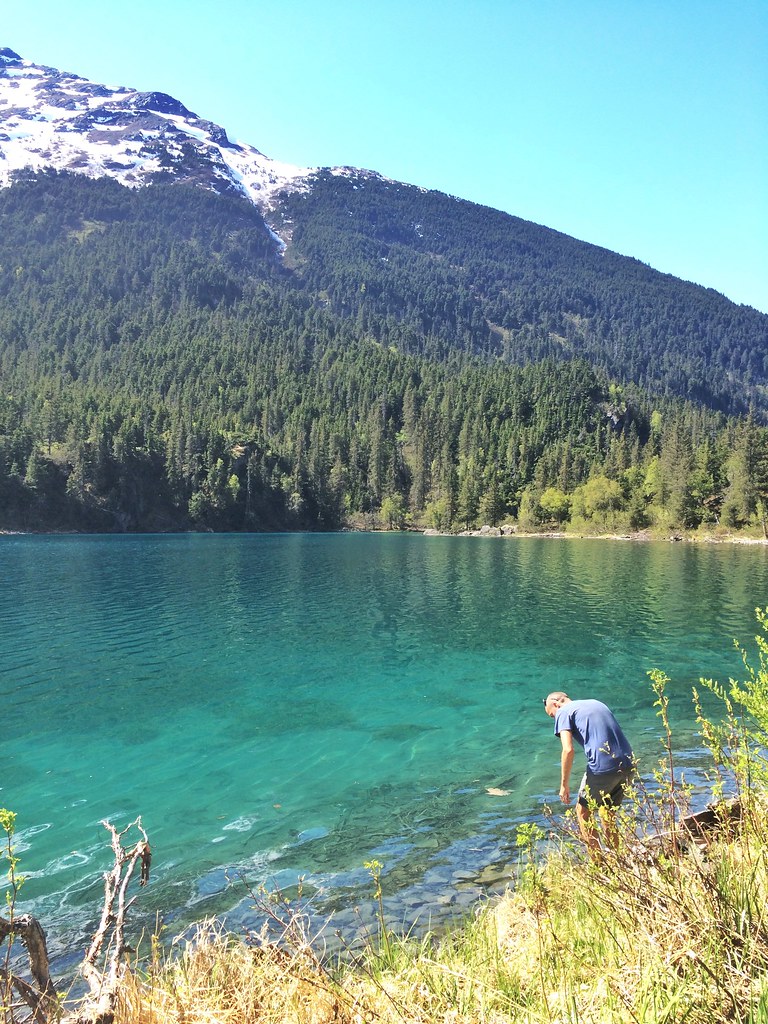 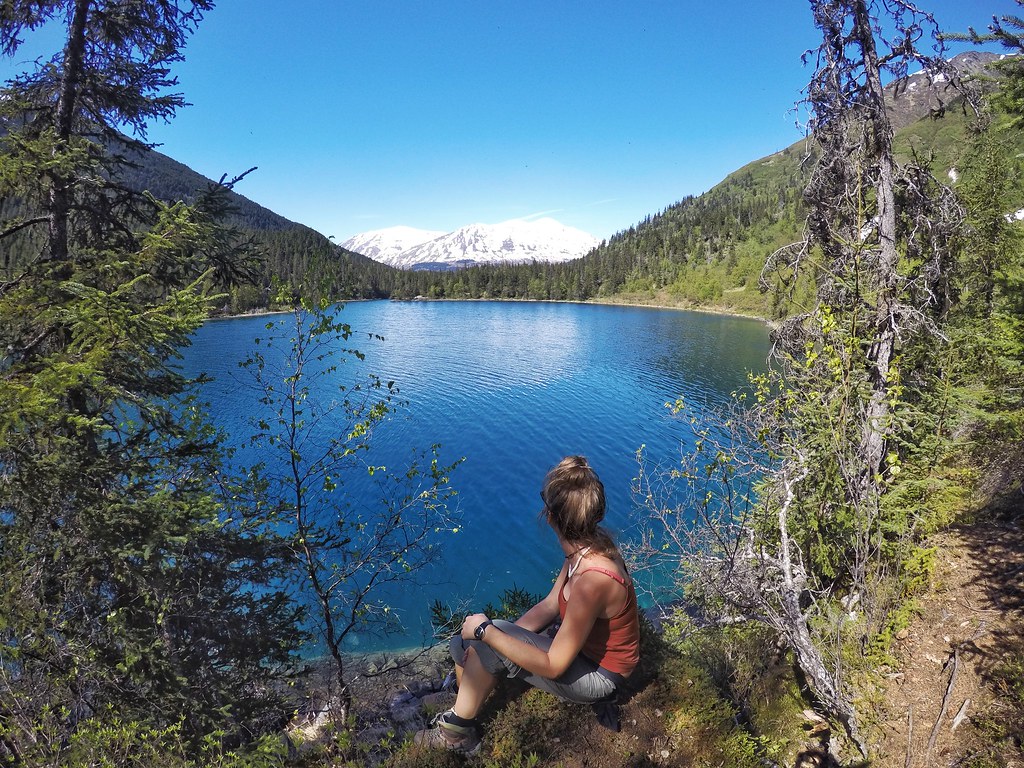 We camped at the trailhead campsite for free and found a lovely spot with forest but also mountain views. I was very happy to have a solar shower off the back of the van and we even got into our shorts, the weather was just delightful. I washed some clothes in the river and hung them on Christmas trees to dry. Craig was looking rather surprised when I got back, “that was crazy huh?” I had no idea what he was talking about. “Did you not hear the wolves?”. The river was so loud I hadn’t heard them but luckily they began howling again and it was amazing to hear, not so cool if we were in a tent though but I love the sound of a howling wolf. 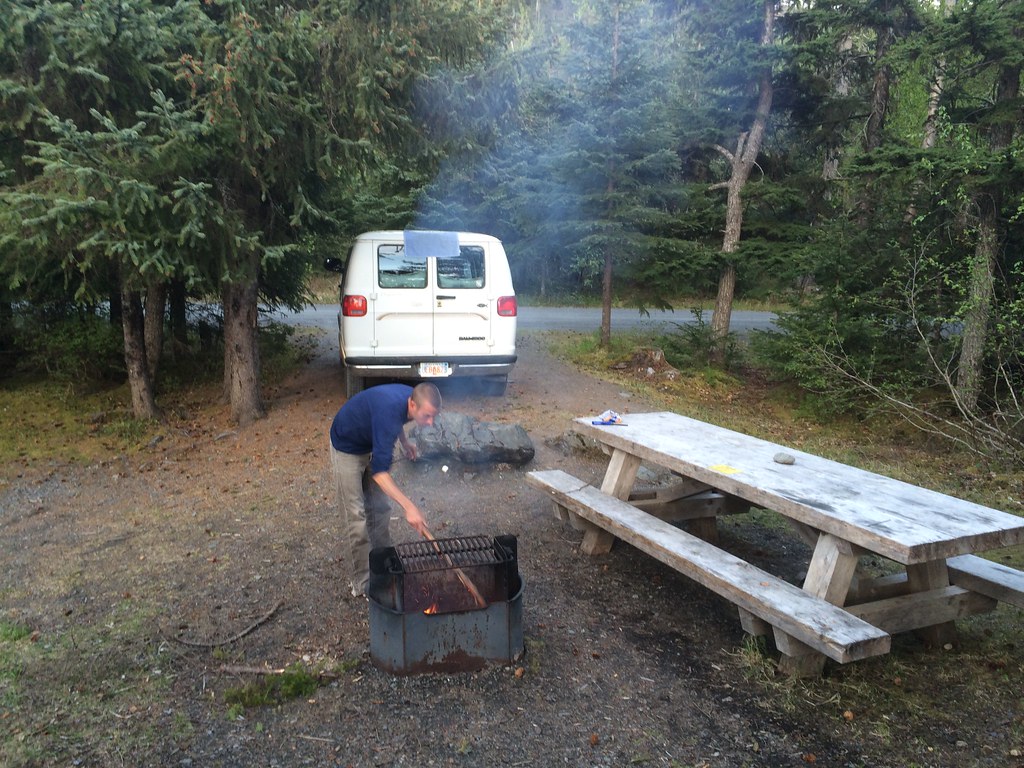 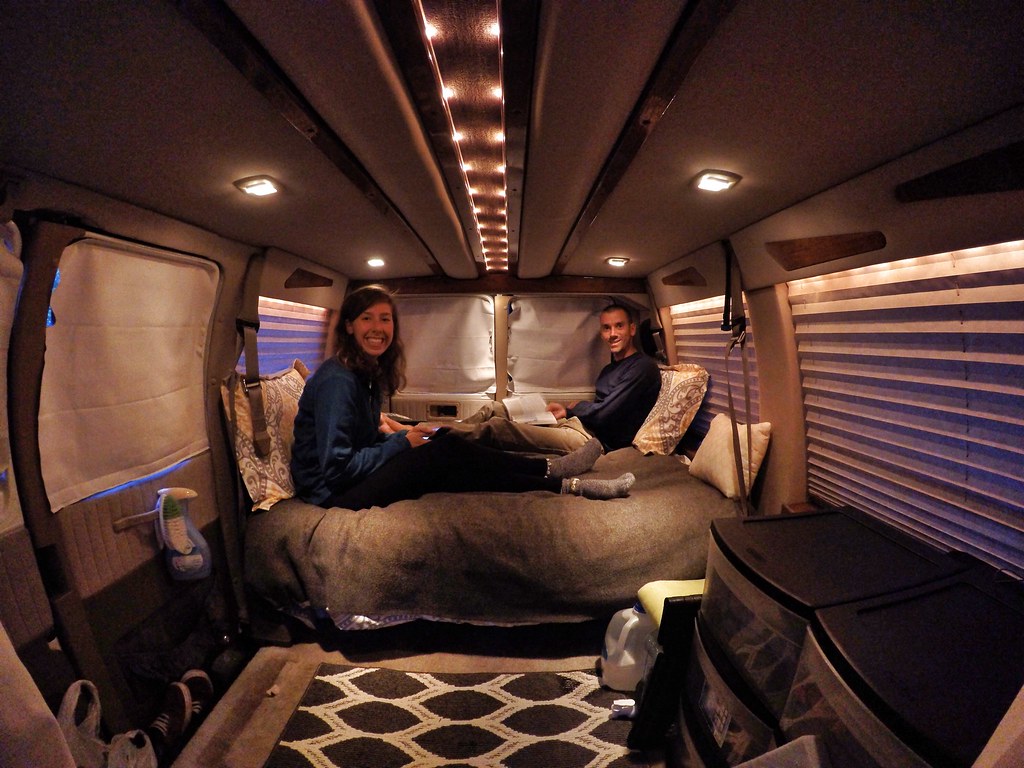 The next day we hiked up to Carter Lake which sounded like a straightforward 2 mile hike up-hill but ended up having a few rather tricky creek crossings. There were four streams we had to negotiate and the water was fairly high from the snowmelt. Some involved rock hopping and giant lunges while others we had to tight-rope along tree branches. Much to my annoyance the trail became snow covered and my efforts of keeping my feet dry through the streams was futile. We were following some footsteps in the snow hoping the people ahead of us had known where to go as we sure as hell didn’t. We bumped into a couple and asked if they knew how much further the lake was, it was only .1 of a mile so basically just over a hill ahead of us. When we looked over the ledge there was just a field of snow, where the heck was the lake we’d been promised? It didn’t take us long to realise the lake was in front of us, but frozen and covered in snow. We continued along the flat basin hoping it wasn’t the lake itself and stopped where the footprints did besides a blue wiggly line which was the edge of the lake. It was a bit disappointing really and we had the most uncomfortable lunch perched on a slanted tree branch which was the only dry place.

We headed back and had to re-cross all the streams. The first one we met we had to try a different approach to reach the opposite side. I made the jump look easy and expected Craig to follow in a similar heroic style but all I heard was an awkward noise and “help” I looked at him and he hadn’t made it up the snowy bank and I burst out laughing. I presumed he was standing on a dry ledge that I couldn’t see but he quickly changed his tone to a very panicked and angry “HELP ME!!!” To which I flew into action, I didn’t even know I could move so fast. I pulled him with so much force that he almost flew over the top of me and he had to tell me to stop pulling. I slid along the snow and ended up lying in the soft powder with a very angry, wet Craig to my side. I didn’t realise at the time but his foot was not safely on a ledge but in fact bathing in the icy water and he couldn’t get any grip on the snowy bank to get out. I was very apologetic about laughing and luckily he forgave me, I think at that point he realised what a valued travel companion I was!! Or maybe I made that last bit up…