Orcas were high up on our list of things we really wanted to see in Alaska. Photos of them summersaulting out of the calm waters graced all the brochures for Fjord trips in Seward but there was a high price to pay and no guarantee. In fact it’s quite rare to see Orcas around Seward and we were worried it wasn’t the best place in Alaska to give it a go but in the end we figured we’d regret it if we didn’t try. We opted for a specific wildlife trip, not an extended glacier one which they offer. It was actually called the ‘Gray Whale Tour’ as so many Grey whales swim by on their migration, and cost $100 for the four hour trip. It was a hard pill to swallow after paying only $17 in Hawaii for a two hour trip.

The day started off well as we drove along the coast and spotted our first otter casually lying on his back floating in the sea and chewing his feet. When we got to the small harbour there were two sea lions fishing just a couple meters away from us. It was awesome to watch them vanish under the water and then big splashing and crashing as they came out with foot long fish in their mouths. 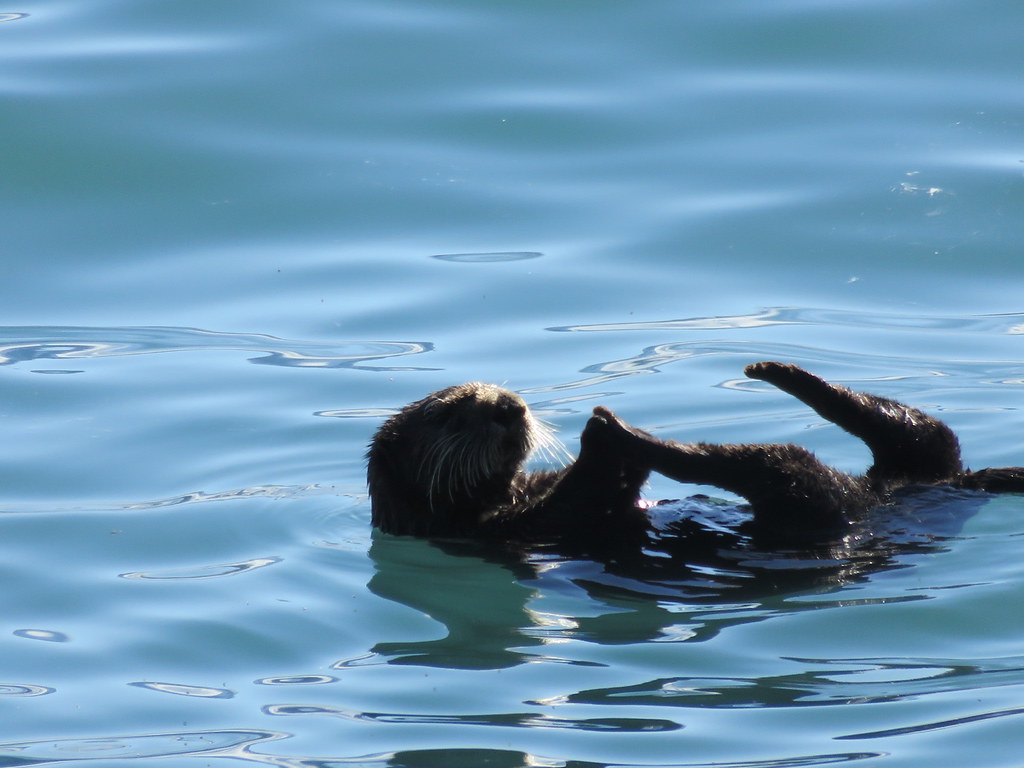 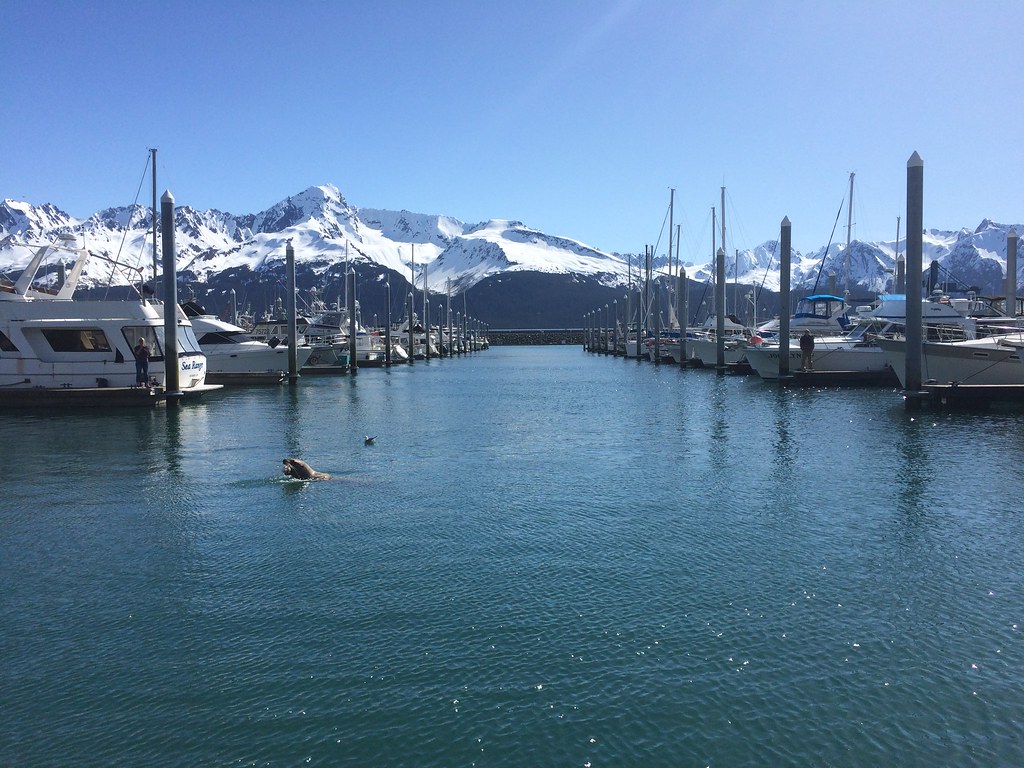 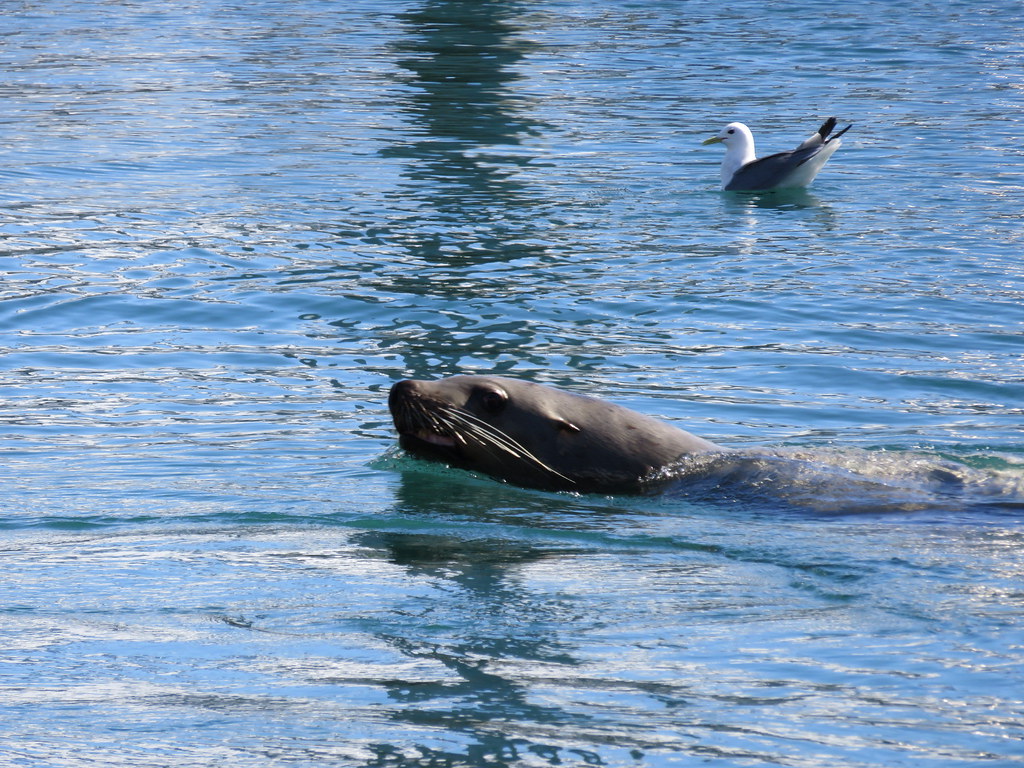 We stood at the front of the boat determined to keep the best spot for the whole trip. It was wonderfully warm in the sun and we slowly left the harbour and then the driver hit full throttle and we all tried to grin and bear the unbearably icy wind. Within about five minutes word was out that whales had been spotted ahead. We glanced into the distance and saw a large black fin which meant one thing “CRAIG…is that a goddam ORCA?! Oh my god!!!! It is…it really is…oh my god there’s another one! Wahoooo!” We plowed towards the three Orcas, otherwise known as Killer Whales, and the captain said they might be a transient pod who travel in small numbers and silently hunt. The captain concentrated his efforts in moving us towards the mum and calf. Apparently the calf will stay with her until the day she dies, Orcas are just too damn cute, it breaks my heart to think they are such close families and a very emotional and intelligent breed and then Seaworld comes along and separates them. We could hear the Orcas blow and then their immaculately shiny black and white bodies would break the surface of the water. We didn’t actually manage to get very close to them which was a shame and a cocky boat called ‘View Finder’ seemed to have no respect for the space your supposed to give whales and just charged towards them. The captain turned the boat so we could get a better look at the bull nearby who was a big big lad. His dorsal fin was about 6ft tall and rising high and proud out the water unlike the floppy fins the captive Orcas have. We actually had a pod of porpoises frolicking around the boat but everyone was in awe of the bull and didn’t give them any attention. The Orcas were clearly busy hunting so we left them be and continued through the dramatic scenery of Resurrection Bay. 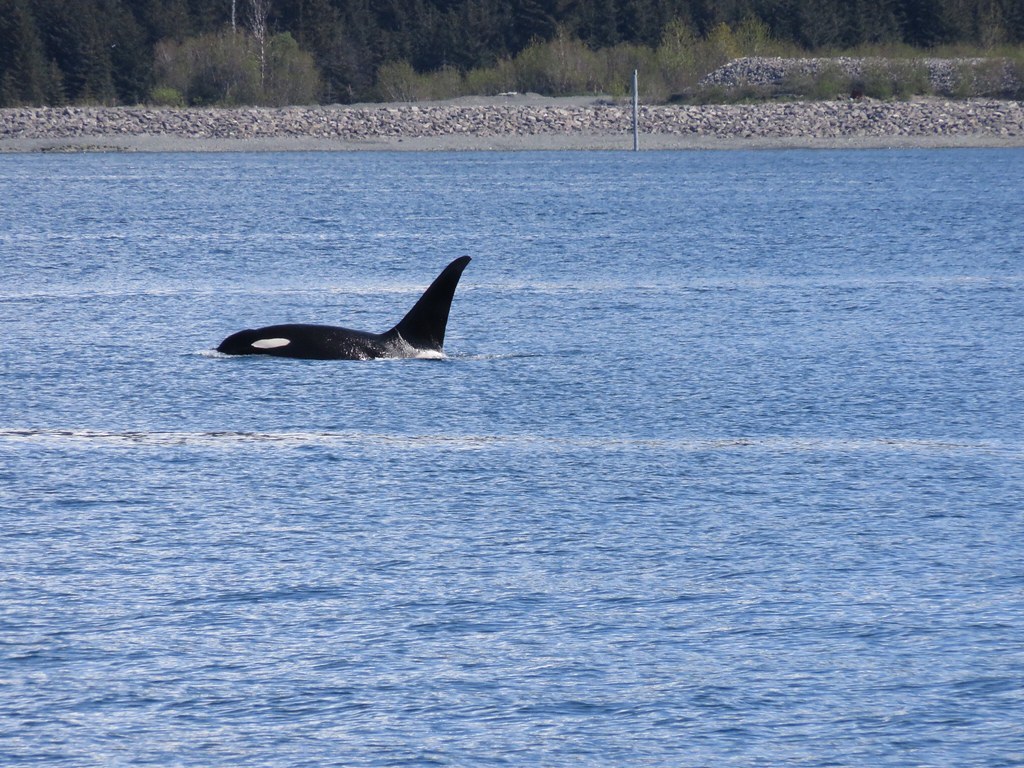 It was a perfect day with blue skies and calm seas but it became far too cold on deck when the boat was moving so most people retreated inside. We were given a free basic lunch and as I was half way through my humous wrap the captain said “there she blows” and I was out on that deck before people even acknowledged what he’d said. I was still chewing my wrap as a humpback puffed air out of her blowhole ahead of us and dove down revealing her perfect fluke. She was in a bay and pretty close to the shore, I didn’t think it could be deep enough for a 50ft whale to dive down there. Interestingly the sea wasn’t clear like I’d envisioned, it was quite the opposite, like a dark green murky kinda colour. I asked the crew about it and they said the Alaskan waters are full of food; plankton, krill and other small fish are what give it the colour. We’ve basically followed the humpbacks up here from their playground and breeding ground in Hawaii to their feast in Alaska. The humpback surfaced two more times and the last one was behind the boat where no one was looking so we decided to leave her in search of others. Plus the ‘View Finder’ boat had found us and once again charged towards the humpback, I guess the boat gets its name from getting into everyone’s view finders.

Craig commented how remote Alaska was, “look, no houses here it’s just wilderness” then I spotted a cabin and the captain said it was actually won in an Alaskan Land Lottery which was a pretty neat idea. The new owner had to wait ten years to build this house which is only accessible by boat or floatplane. We passed lots of sea birds which tend to bore us, but there was a rock with cormorants hanging out on it. We’d seen them in China where they use them to fish with, but it’s more of an ancient tradition now and mainly just done for tourists. The captain said they can dive 150-180ft down but after being in the water they need to open their wings and dry off before they can fly away. Cliffs were covered in seagulls and bird shit while sea lions took a break from fishing and chilled on rocks in the sun. Two were having a bit of a battle about the best location on the rock which was funny to watch. Big spires arose around us in the sea and made for a nice change of scenery. 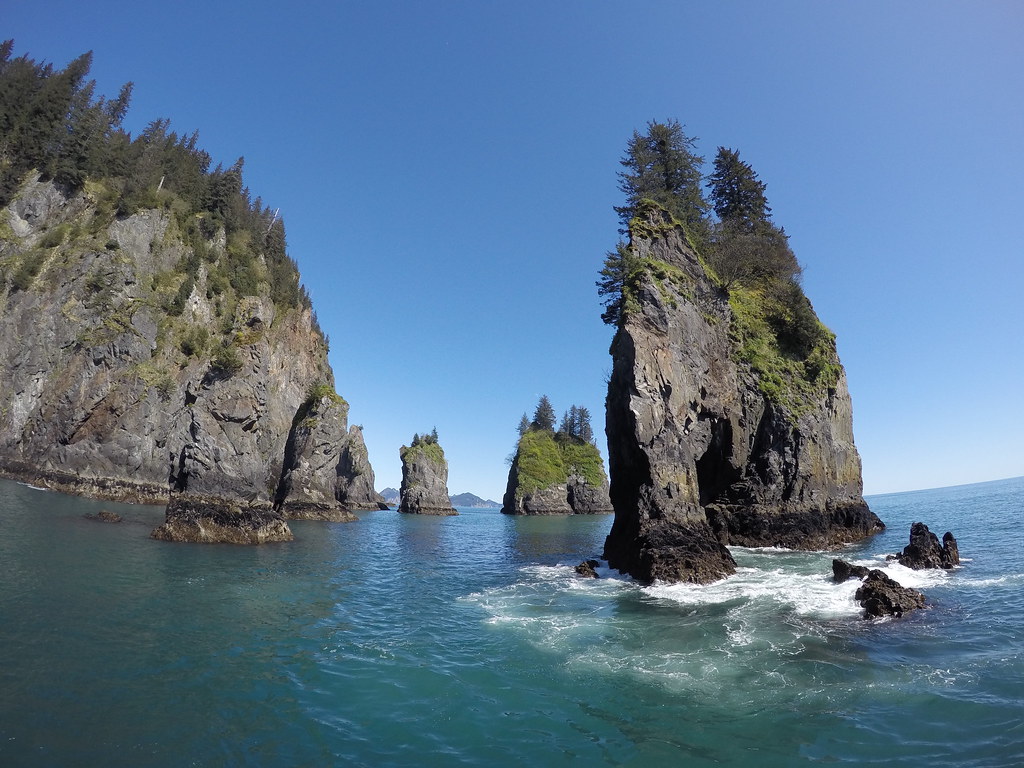 The boat then veered round and we could see layer upon layer of snowy peaks lining the surrounding coastline. We were now on the Gulf of Alaska and it was perfectly calm, the crew said there’s normally 10ft waves so we were very lucky. The open water is where the Grey Whales migrate through so it was the area we were most likely to encounter them. We didn’t actually spot any though, which was funny as it was called a Grey Whale tour but it’s the end of the season and this trip actually terminates in two days so their still around but not in the vast numbers there was. 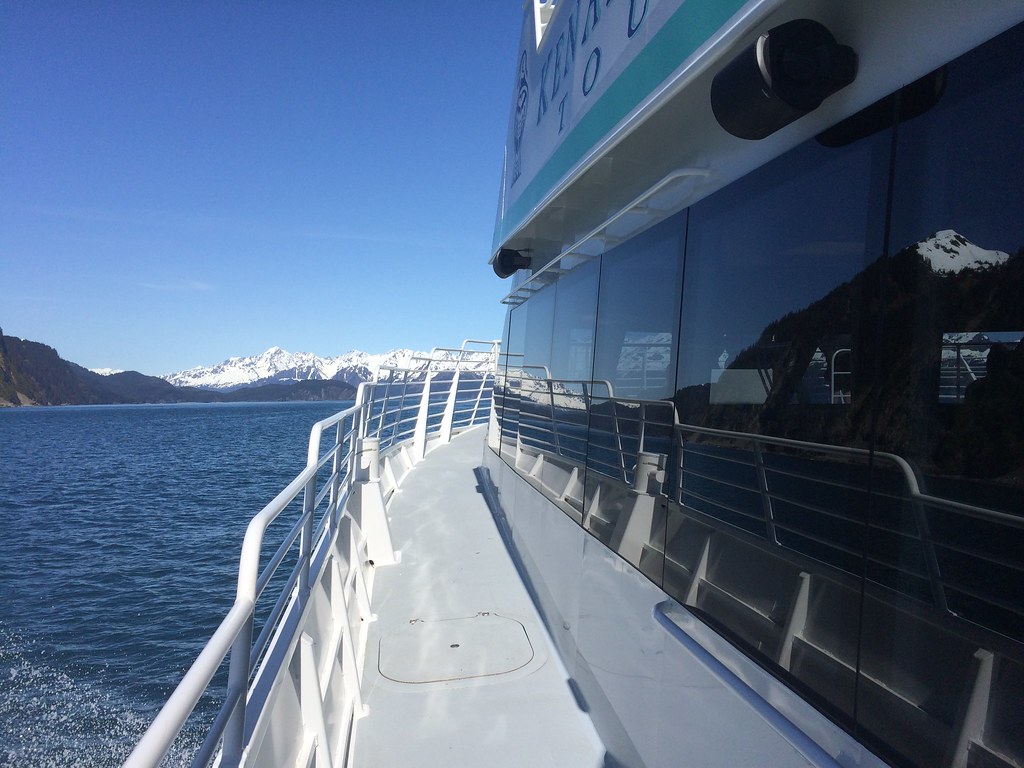 We saw one lone puffin who was quickly, well as quick as it could, trying to fly away from us but just constantly slapping its belly and wings along the water. A patch of rugged coast had a dozen or so white seals resting on rocks. They were white and much smaller than seal lions, we’ve always thought sea lions were seals but now we know! They were also very shy so we had to all be silent or they would leave the rock and hide in the sea. The boat turned and we took the opposite side of the bay back towards Seward. We went past Bear Glacier which was rather far away but we could just see the giant icebergs surrounding the sea around it, some of them were the size of houses! 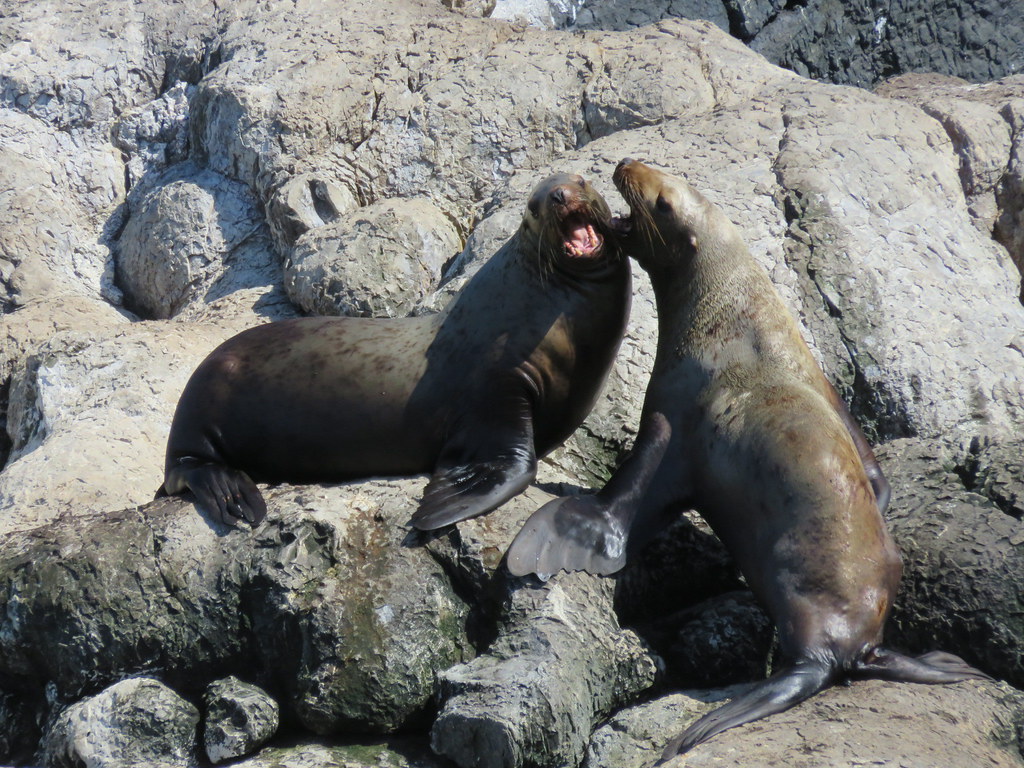 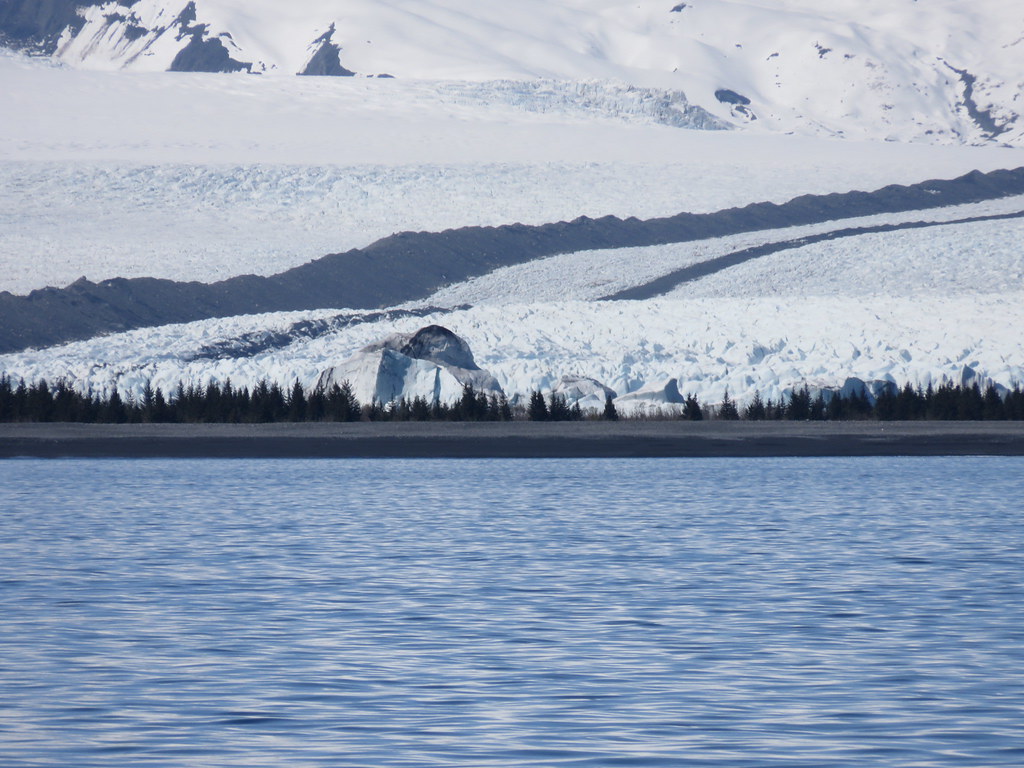 We relaxed inside and admired the mountains continuously surrounding us. As we did my nose started twitching, I could smell freshly baked cookies, my nose never lies and staff began handing them out to everyone. Before ours arrived I saw a lady through the window point across the sea, I followed her finger and it was another Orca!! I ran onto the deck (again) not even waiting for my cookie – for anyone that knows me that’s a big deal. Craig kindly hung around and grabbed us both a cookie before joining me on deck. As we got closer we could see there was a pod this time and multiple fins were rising out the water. There was six of them very close together, they all rose out the water and sunk below at almost the same time. They would come out every few seconds all looked very smart in their shiny tuxedos. Much to our excitement there was a baby and it was swimming alongside the big bull which was so adorable. The captain turned off the engine and we realised they were coming our way. Everyone onboard was so excited, although one women screamed every time the Orcas surfaced which caused a lot of “shhh’s” from the crowd. To our amazement they came within 10 meters of the boat and I couldn’t wipe the smile off my face. We could actually see them through the water and know where they’d be rising up. I could hardly contain myself, it was such a magical experience. Best of all that prick ‘View Finder’ was nowhere to be seen. The pod headed to the front of the boat and then continued on their voyage. We were behind schedule back to Seward after stopping for these guys so the captain said it was a rap and we headed the last 5 miles back to the harbour. A young enthusiastic worker came around seeing if everyone enjoyed their trip and he joked that it was the best Grey Whale Tour he’s ever been on. What an unbelievably lucky day we had, and an absolute highlight of our 8 years of travelling the world. 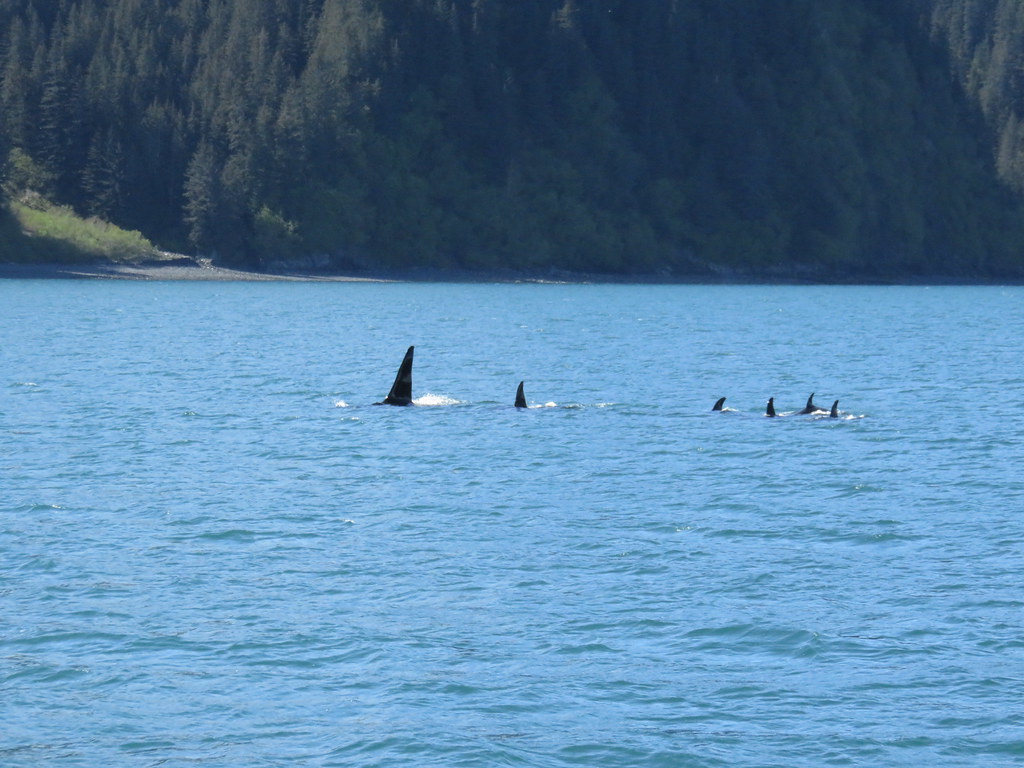 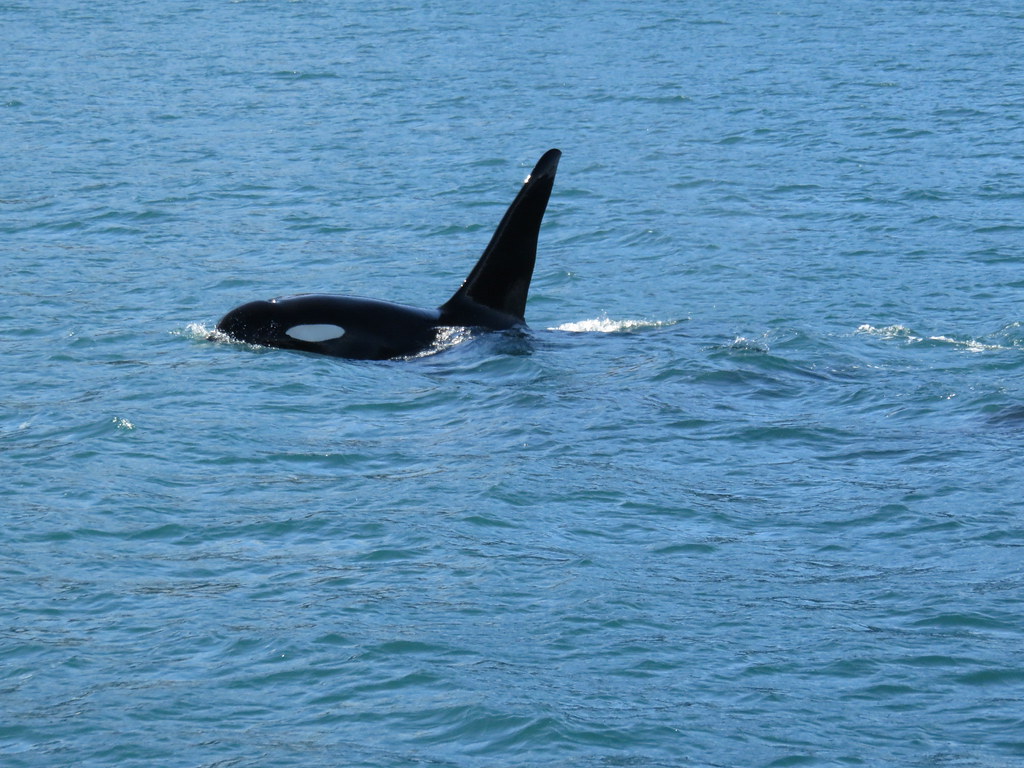 The first pod of orcas we saw earlier in the day were pretty close to the shore so we decided to try and find a place to camp that night where we could scan the sea. Luckily we found a great spot with just that! We could overlook the calm bay while the sun heated Daphne up like a greenhouse. Throughout the evening we saw otters and porpoises with the zoom on our camera, no whales but it was still lovely wildlife watching from the comfort of our home. 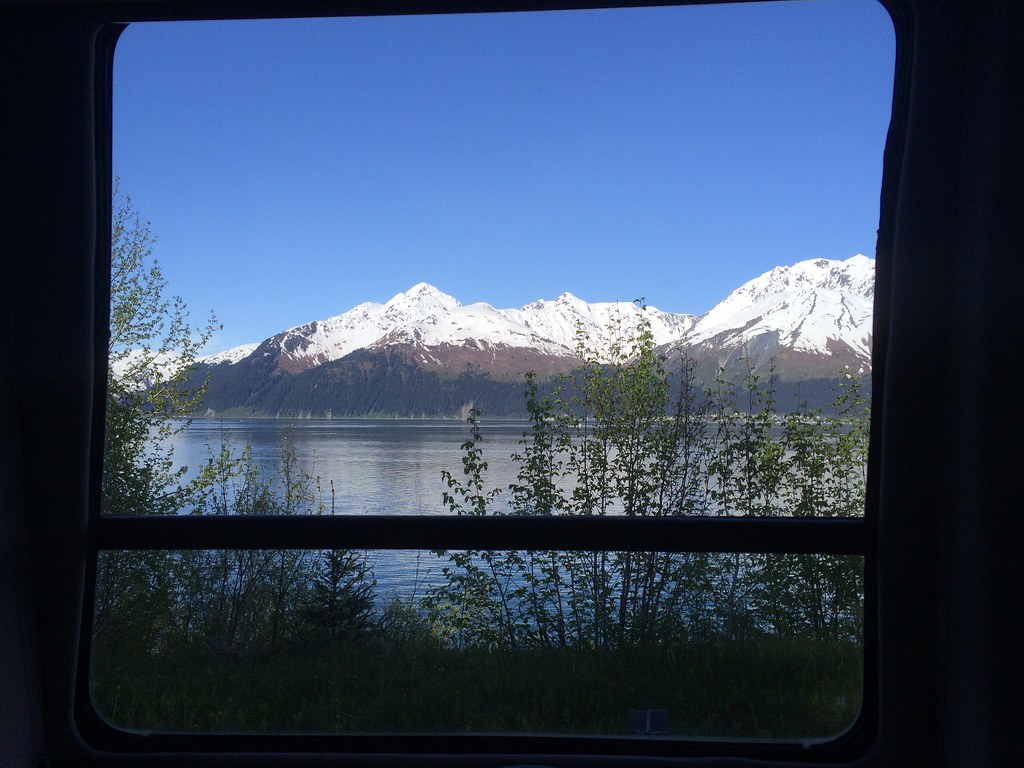 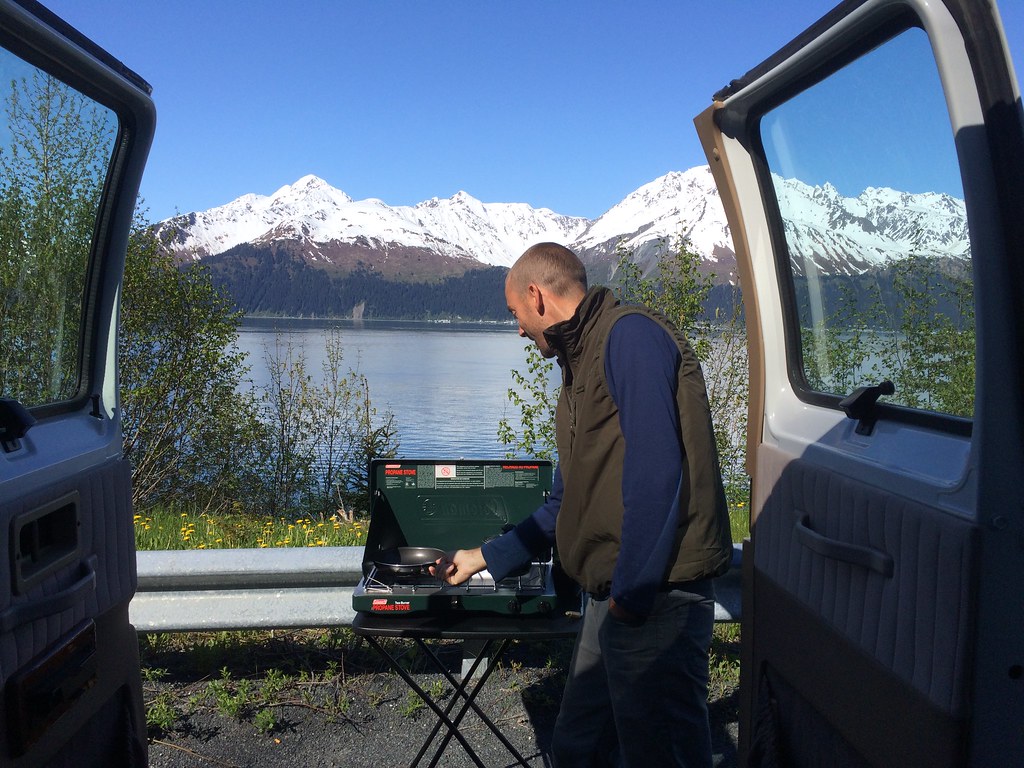 When we woke up the next morning the mountains ahead of us were lit up beautifully by the sun. Beside the van was a large grassy patch but as the sun hit the grass it started coming to life. The dandelions all began opening and erupted into a sea of yellow flowers. It was so beautiful. 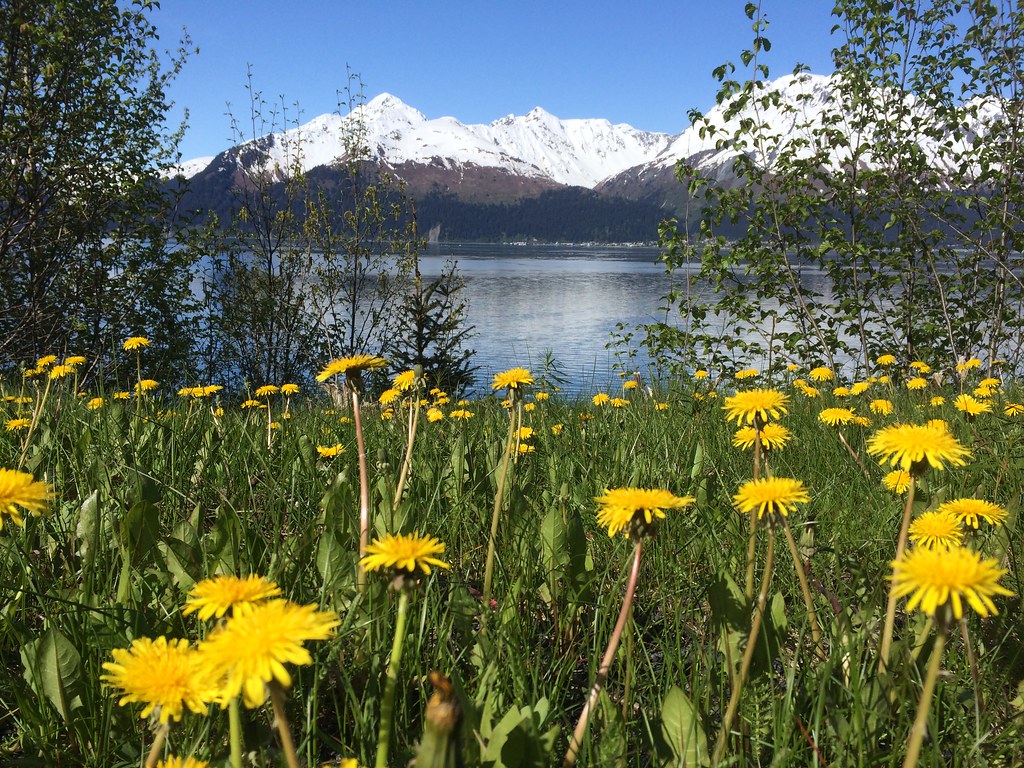