It was an awesome drive heading east along the Sterling Highway towards the mountains. We followed the gorgeous blue Kenai River and made it to Tern Lake at the junction with Seward Highway. The lake was perfect with mountains all around it. We took lots of photos and continued onto the Seward Highway before stopping at the most idyllic camp spot. A dirt road went down to a gravelled circular peninsula that spilled into the lake. Two tenters were on one side out of the wind whilst we picked the best spot for views and had it all to ourselves. We were right beside the lake and had snowy peaks looming around us. It was heavenly. The winds had really picked up on our side of the lake so the water was choppy like the sea and sounded like we were by the seaside. 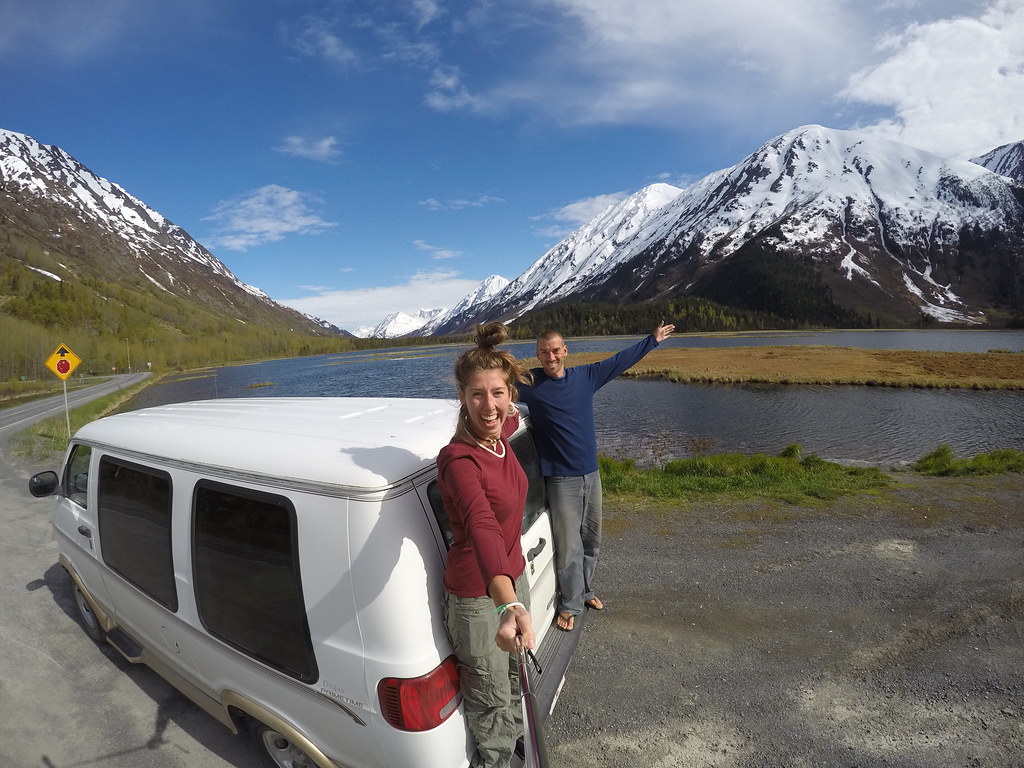 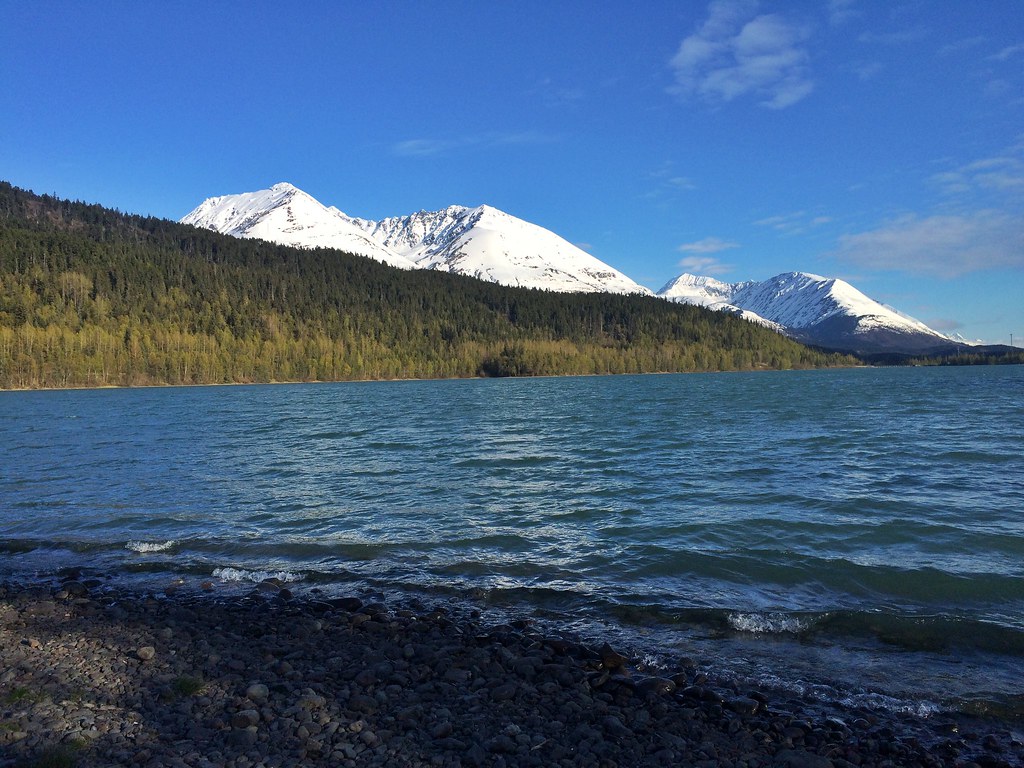 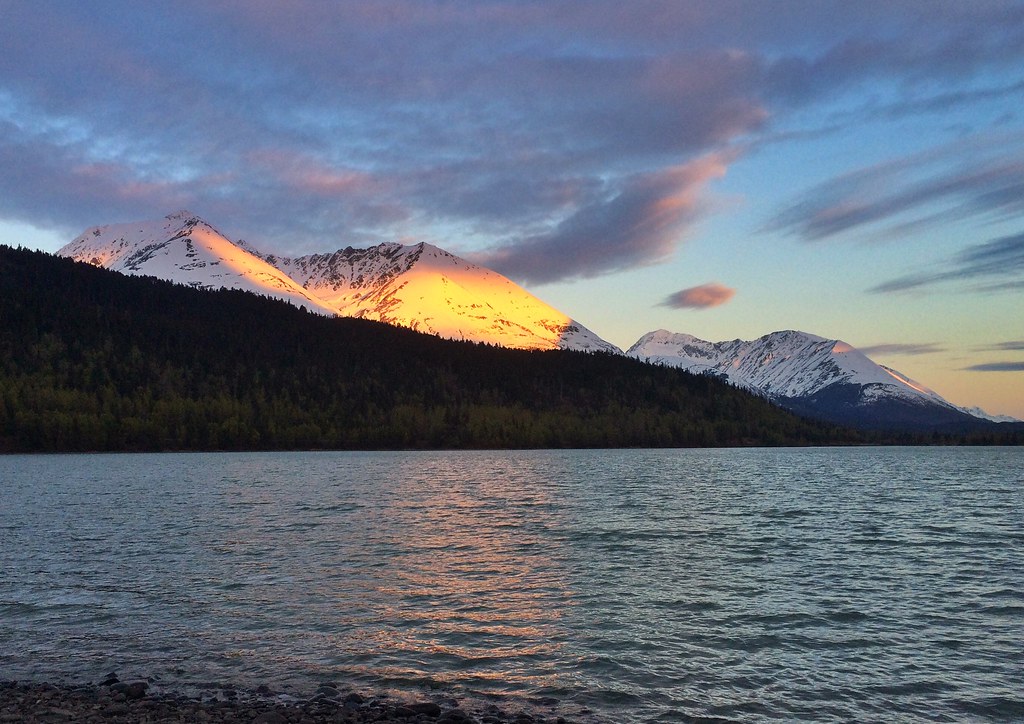 When we woke up in the morning I couldn’t believe how beautiful the view was. I lifted the blind and had double vision. The lake was as flat as a pancake and reflected the crisp mountains. It was one of the best view we’ve ever woken up to. 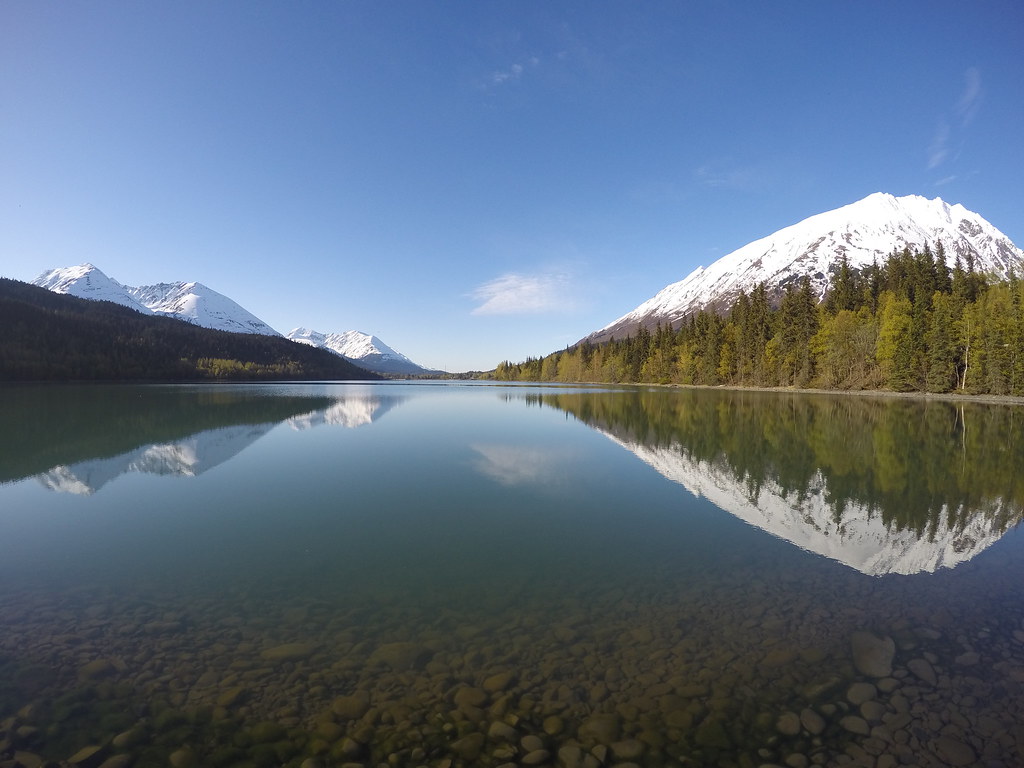 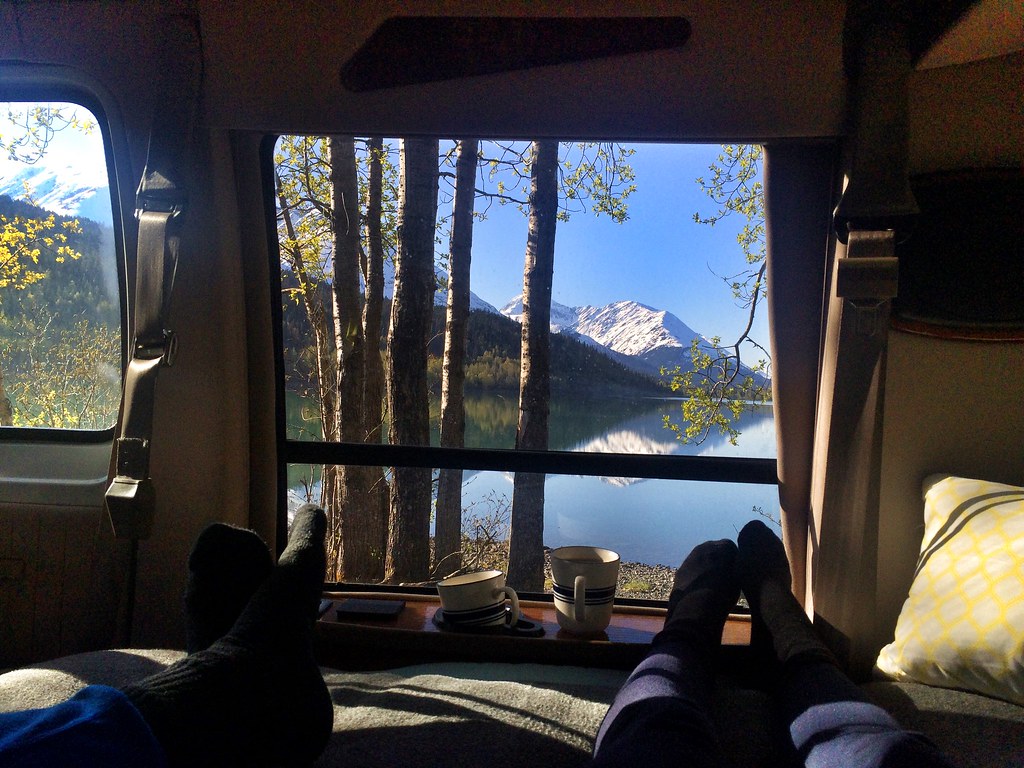 We had clear blue skies and cruised along the stunning highway passing mirrored lakes, endless meadows, gushing rivers and towering peaks. When we arrived at Seward, the end of the highway, we took the Exit Glacier Road as we wanted to do the Harding Icefield Trail while the weather was good. It was predicted to take 6-8 hours and sounded pretty tough, rising up alongside the Icefield and up to 3500ft. We packed a lunch and set off at 12pm, normally far too late for a hike but with the midnight sun there’s not much urgency. A warning sign at the start of the trail told everyone how to be bear-aware. There was one pointer that we hadn’t seen on other signs and it caught our eye; ‘if the bear begins to eat you, fight back’ Let the hike begin! The trail had gradual switchbacks and it didn’t take long to reach the snow line. We weren’t expecting any snow but it thickened the further up we went, as snow does. It was super soft which made it difficult to get any grip going up-hill. On the plus side the sun was shining and it was wonderfully warm yet we were surrounded by snow, it was very bizarre. Suddenly we heard a huge rumble of thunder and quickly realised it was in fact an avalanche so we scanned the snow covered mountainsides around us and watched a river of snow and ice fall down a sheer edge and for a long time afterwards a brown area of snow just constantly moved downhill. It was crazy. But then we heard another one! And another! Within ten minutes a dozen avalanches had hit the mountainside. The unseasonably warm weather must really be melting the snow quicker than it can cling onto the edges. 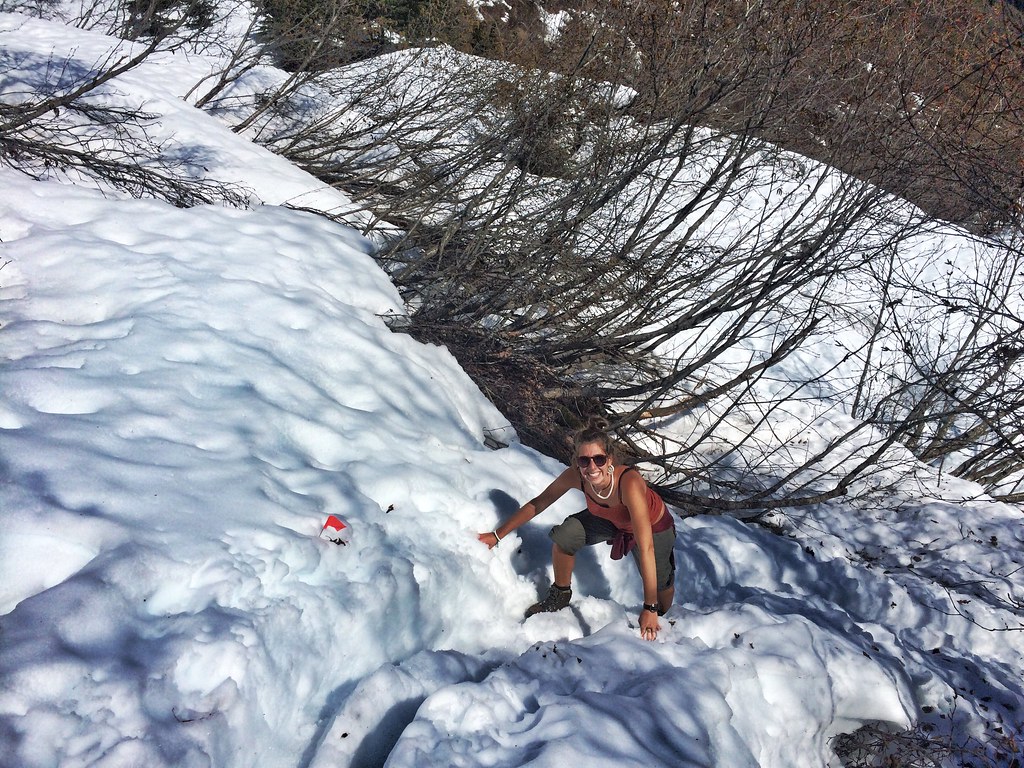 We reached a viewpoint looking along Exit Glacier below us. It wasn’t very blue as I’m sure lots of snow was covering the ice but a few cracks and crevasses showed a blue tinge. The glacier headed uphill to its source, The Harding Icefield. We pressed a patch of snow down so we could stand in one spot and not constantly sink, and admired the 360 degree mountain view. It was incredible; a river flowed from the base of the glacier and spread out across a gravel plain until the dense forest took over the surroundings and snowy mountains rose from the woods. Such vast wilderness all around us. 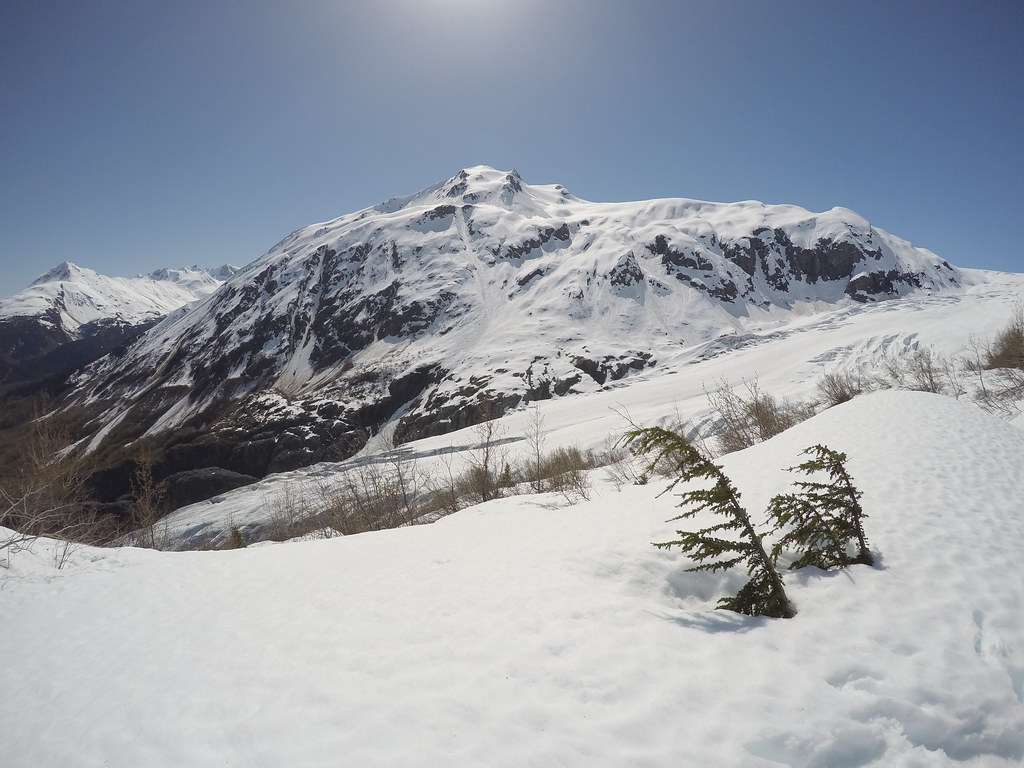 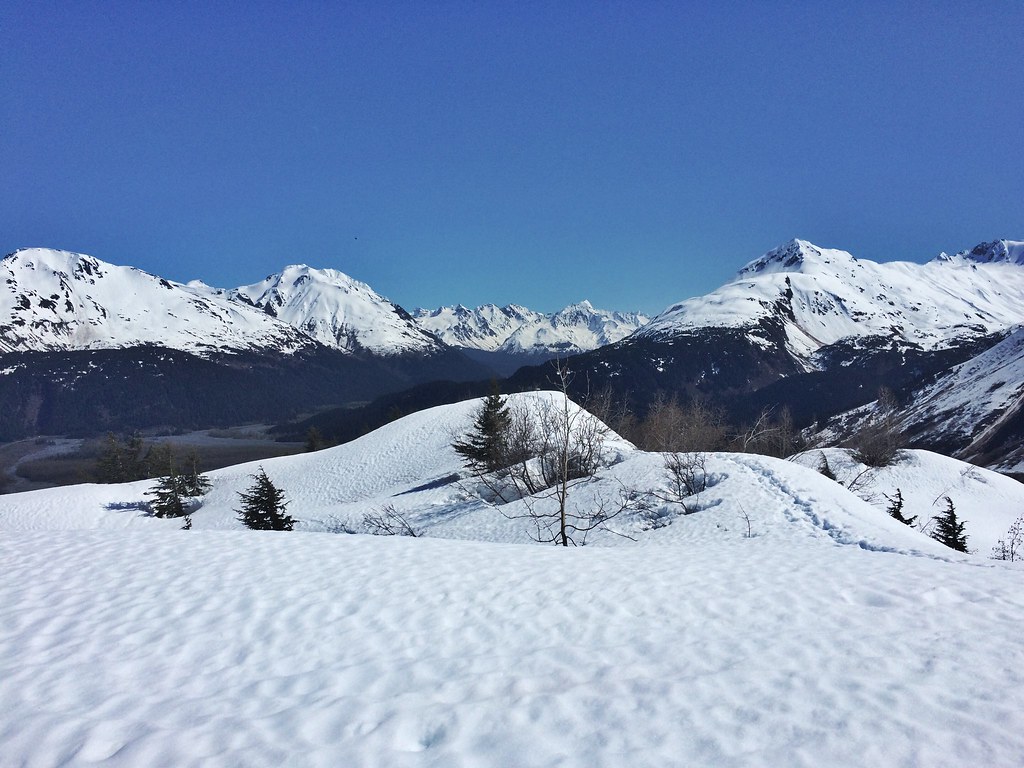 The half dozen other people we saw on the trail headed back from this point, and to be honest we were happy with the view and fed up with the snow but we wanted to eat our lunch and needed a dry spot so we persevered uphill and found the perfect spot; a giant boulder surrounded by snow except its edges where there were creepy 2 meter gaps down into the abyss. We had to jump onto the rock and albeit the view was phenomenal, it was hard to relax incase we dropped something down the gap. Craig actually took his hiking boots off to dry them which stressed me out even more, what if they fell down the edge, how would he walk back?! 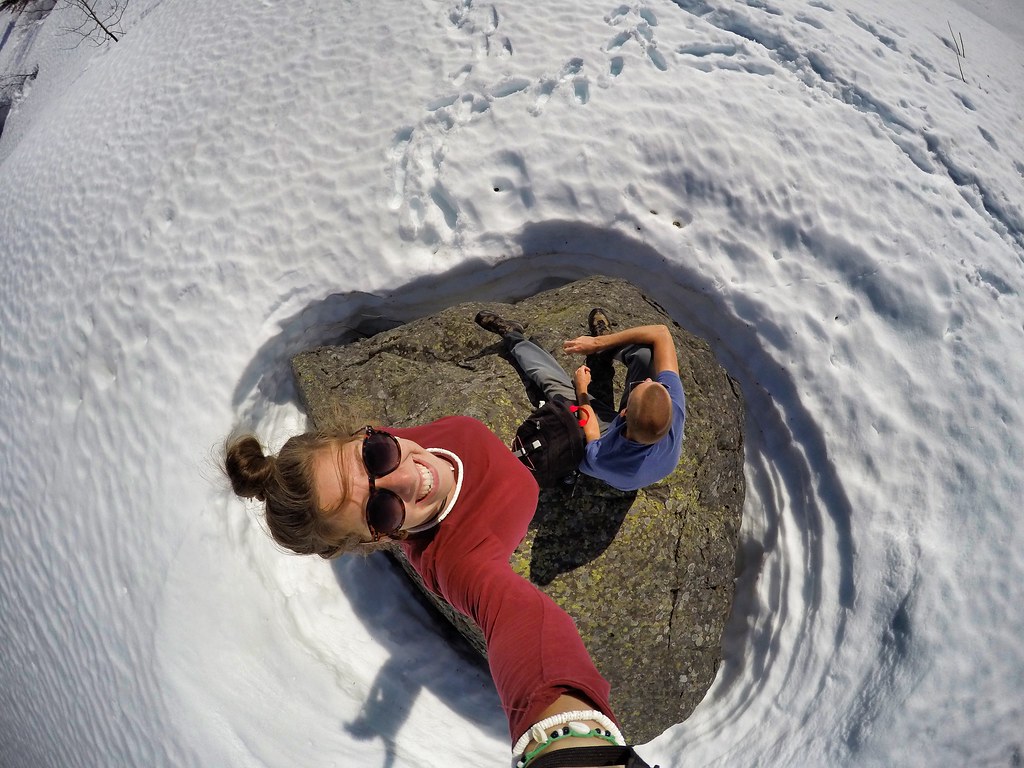 Anyway, we survived and were happy to head back to Daphne for a cup of tea and to rest our legs. Before we did that though we had to slide and jump our way down the snowy trail. It wasn’t as fun as it sounded and my boots quickly filled with snow, they leaked anyway but this just made it very unbearable walking in icy puddles. A couple passed us and the bloke totally fell over and just lay there giggling and we couldn’t help but laugh as well. I thought it was weird that he continued to lay in the snow and wait for his friend to give him a hand. But then we realised his leg had fallen down a meter deep hidden hole, basically like a snow bridge around a tree root. They can be very dangerous and snowboarders and skiers have been known to fall down very deep ones when going off piste. When we made it back to flat, dry ground we did a wee detour to the edge of the glacier. It wasn’t the most impressive glacier we’d seen but it was still pretty cool. Signs along the trail had dates showing where the glacier used to be and it made us feel happy that we were seeing all these sights now while we’re young, these glaciers may not be visible when we’re retired. 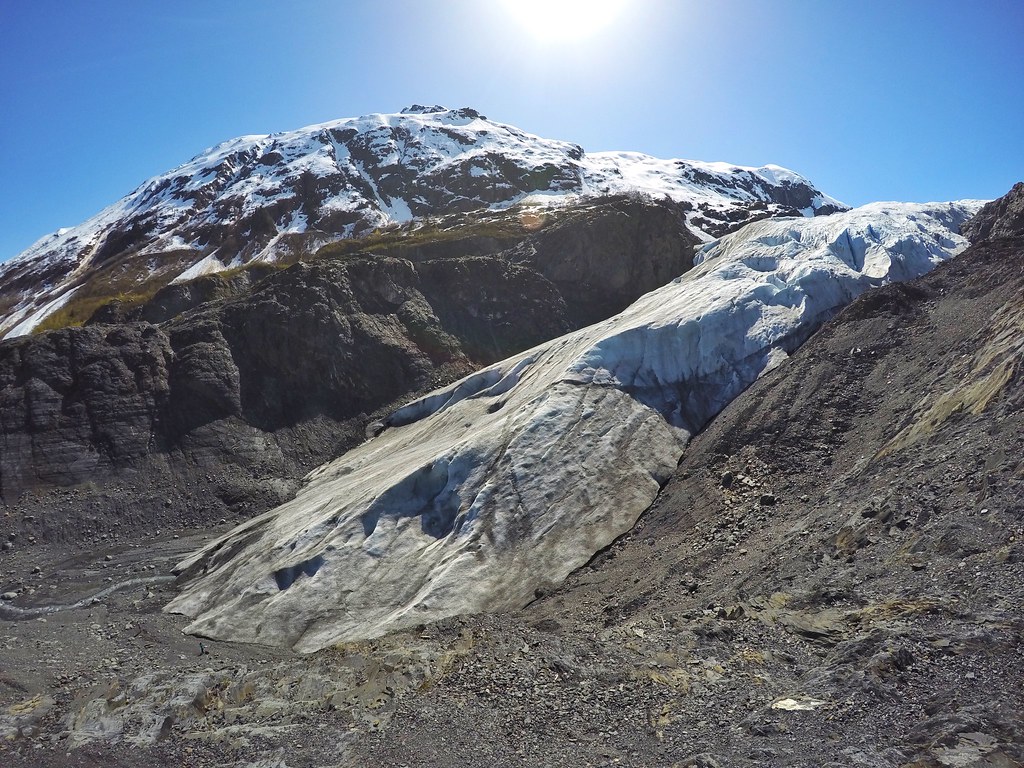 We camped along the Exit Glacier Road beside the river and the standard Alaskan mountain view. The beginning of the glacier trail had been covered in moose poo so we decided to go back after dinner and do a wildlife drive and walk. We didn’t spot anything beside the roads so we entered the park on our own at 10pm. It was still light outside but the mountains were beginning to change colour. We took the trail to the river and continued along a very rough, narrow trail on the edge of a rock wall right above the torrent of icy water. We made it to the front of the Glacier and it wasn’t as dramatic as we’d hoped. There were no hanging edges waiting to drop off or vibrant colours, it was all rather black and grey. We could touch the glacier though and we even held an ancient ice cube which was rather exciting and almost made up for the fact that we had no wildlife encounters. The route back did give us a beautiful sunset show across the mountains, staining the snowy peaks shades of pink and orange. 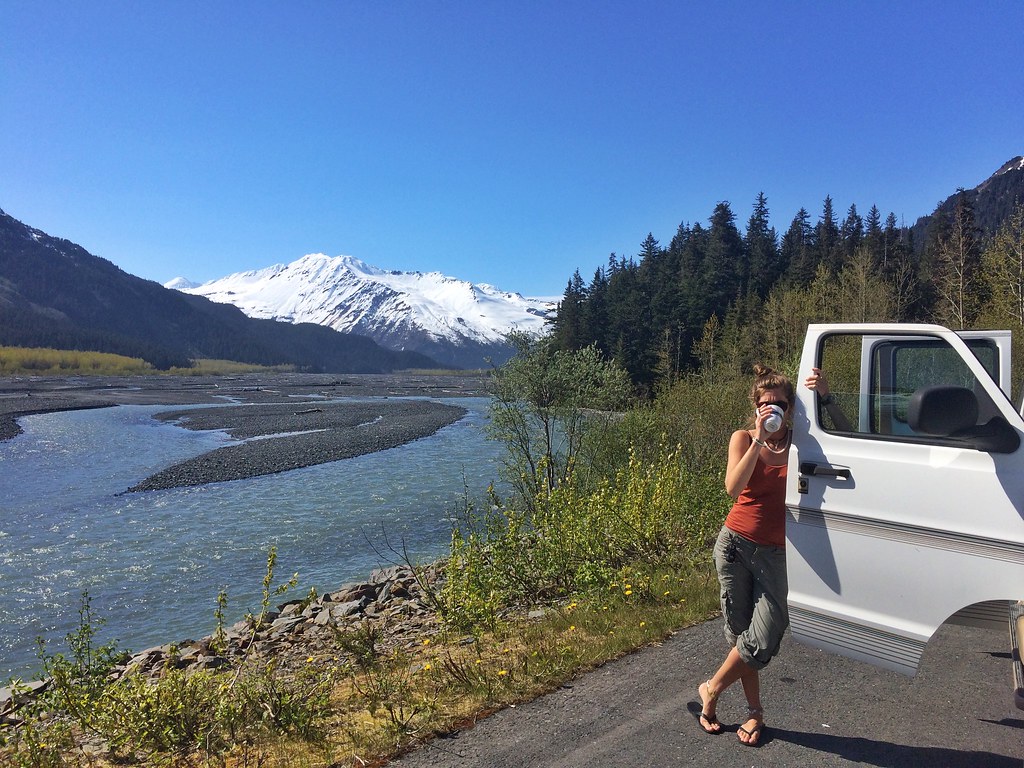 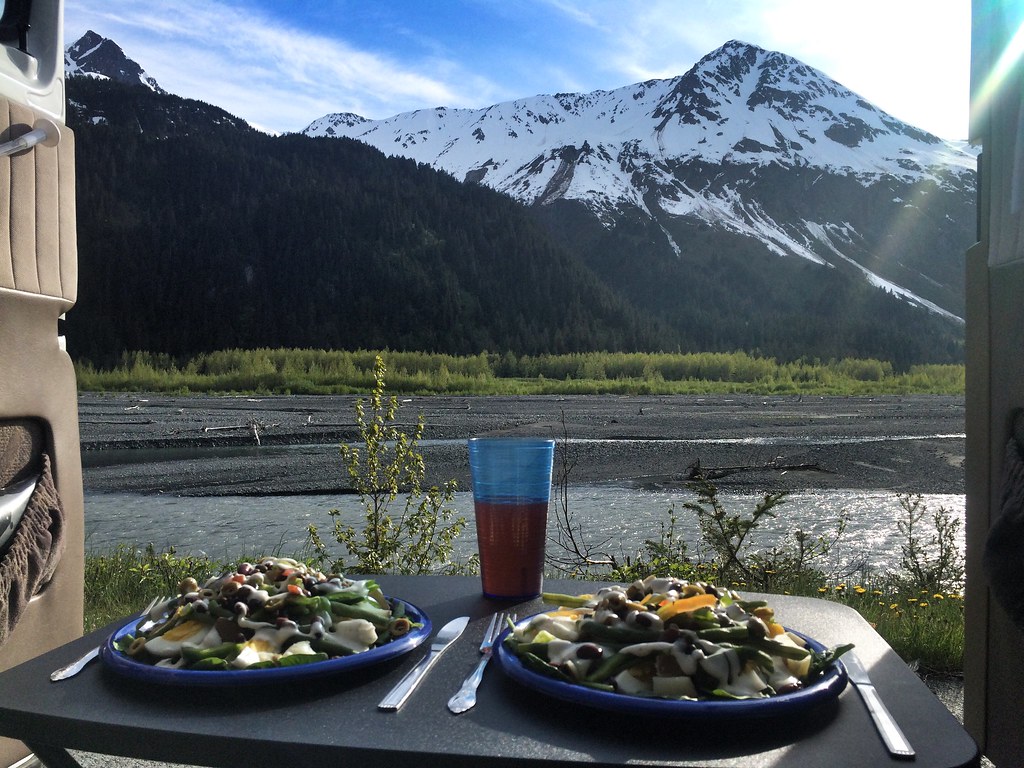 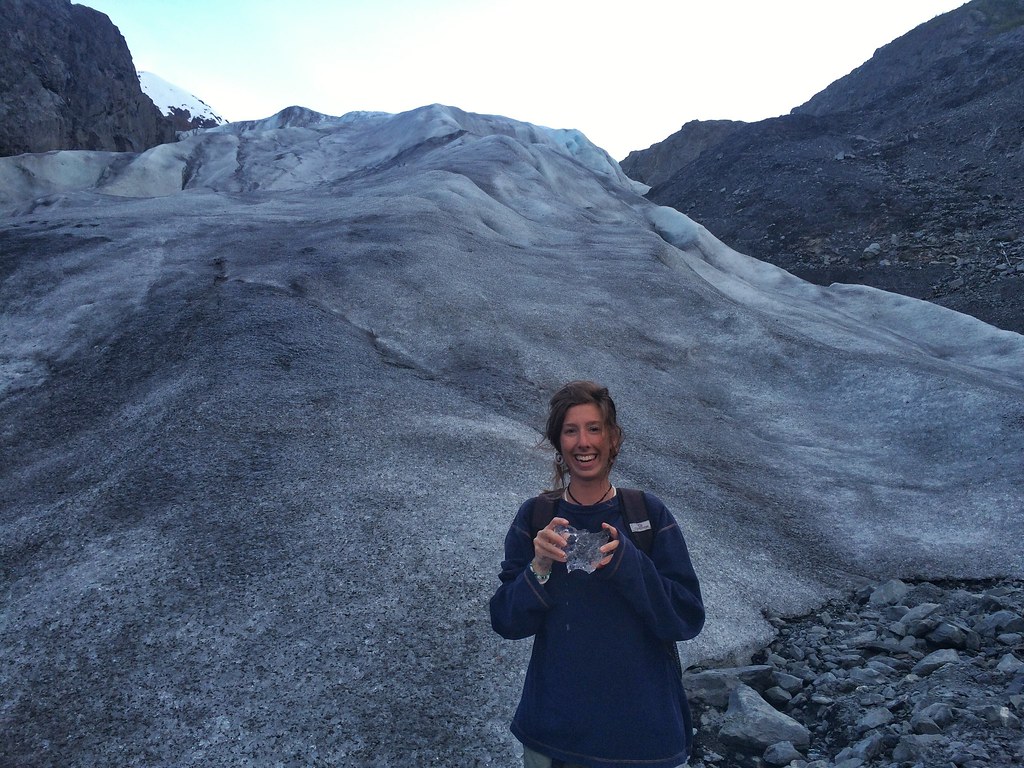