When we drove through the rain to Soldotna the mountains became distant white triangles in our wing mirrors. The land flattened and the forest became denser. It was a prime area for wildlife but we didn’t even see a goddam moose, we think Anchorage stole all the wild moose and took them to the city to help with tourism. The weather was trying to clear up so we managed a hike to Lower Russian Lake which wasn’t very exciting and then back to Daphne for a cup of tea. Oh how we love being back in a van and having our afternoon cuppas. 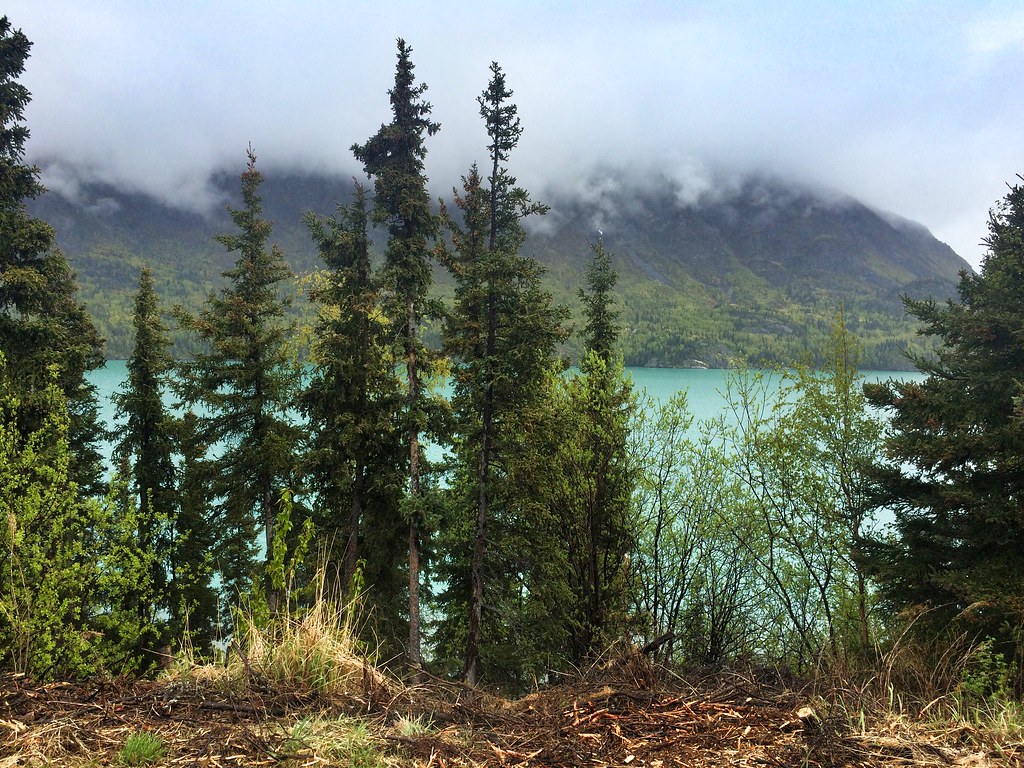 The next day we stocked up our food in Soldotna and were served by a cashier with the coolest name; I read out his badge, “Randon Flood….that’s a very unique name” to which he replied “my middle name is Mint” and I let out a huge involuntary cackle. We managed to fill up our solar shower with hot water and made the executive decision to not continue south to Homer. It would of been about another 100 miles along similar flat roads, although I’m sure more scenic as it goes along the coast but we already missed the mountains and Homer doesn’t actually have the mountains, you have to get a boat to them. We figured, why get a boat when you can be amongst them in the van so we set off. 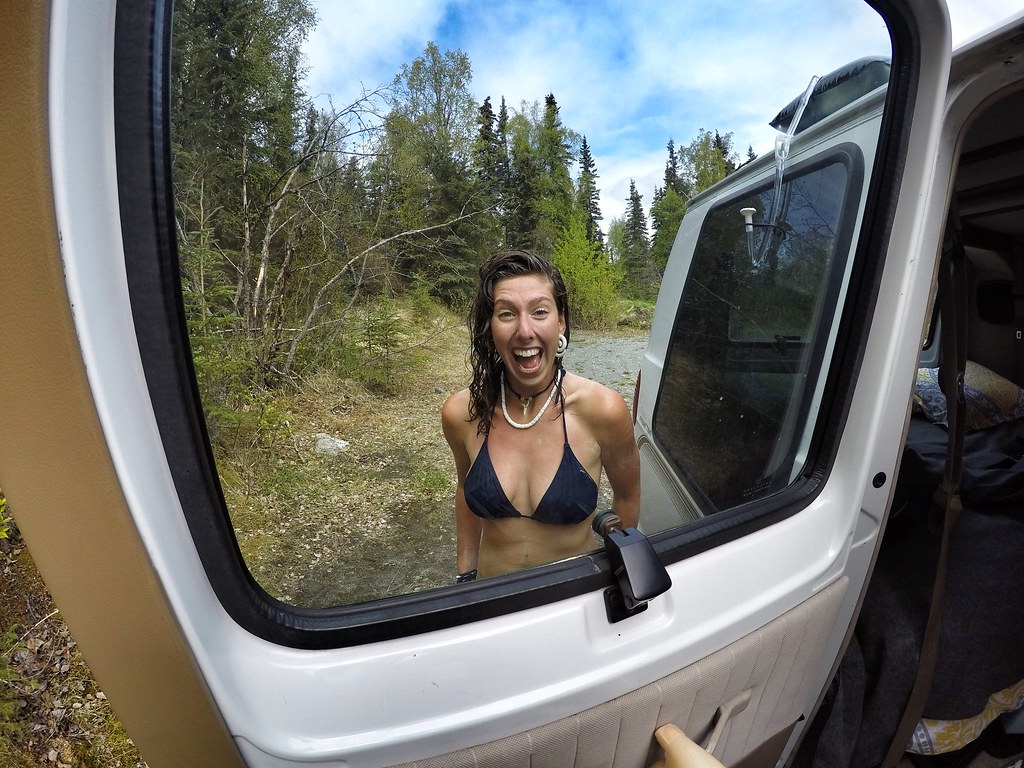 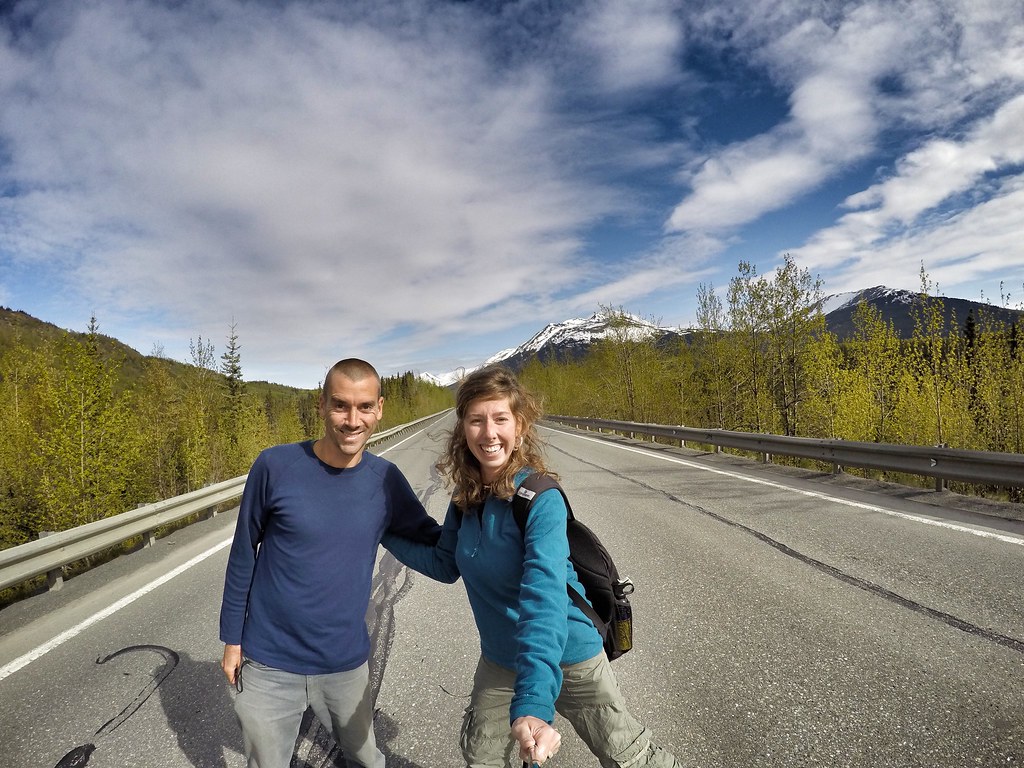 We pulled off at the Skilak Lake loop road where we’d got to the day before and seen a worrying sign saying ‘4 wheel drive only, soft road, drive at your own risk’. We didn’t want to destroy Daphne so we’d asked at the info centre in Soldotna about the road conditions and they said just give it a go and if its bad turn back. Well duh. So we did exactly that. There were some nasty pot holes but as far as dirt roads go it was great as it was smooth mud not bumpy gravel. It was still very slow going for the 5 miles we did though. We ended up at Hidden Lake Campground, another free one where we enjoyed cooking dinner beside the lake and then finding ourselves a nice quiet campsite to roast our marshmallows and get attacked by mosquitos the size of birds. I know a few countries joke that the mosquito is their national bird but I feel Alaska has the claim to fame here, never have we seen such big ones. On the plus side they are really easy to catch and throw out the window. 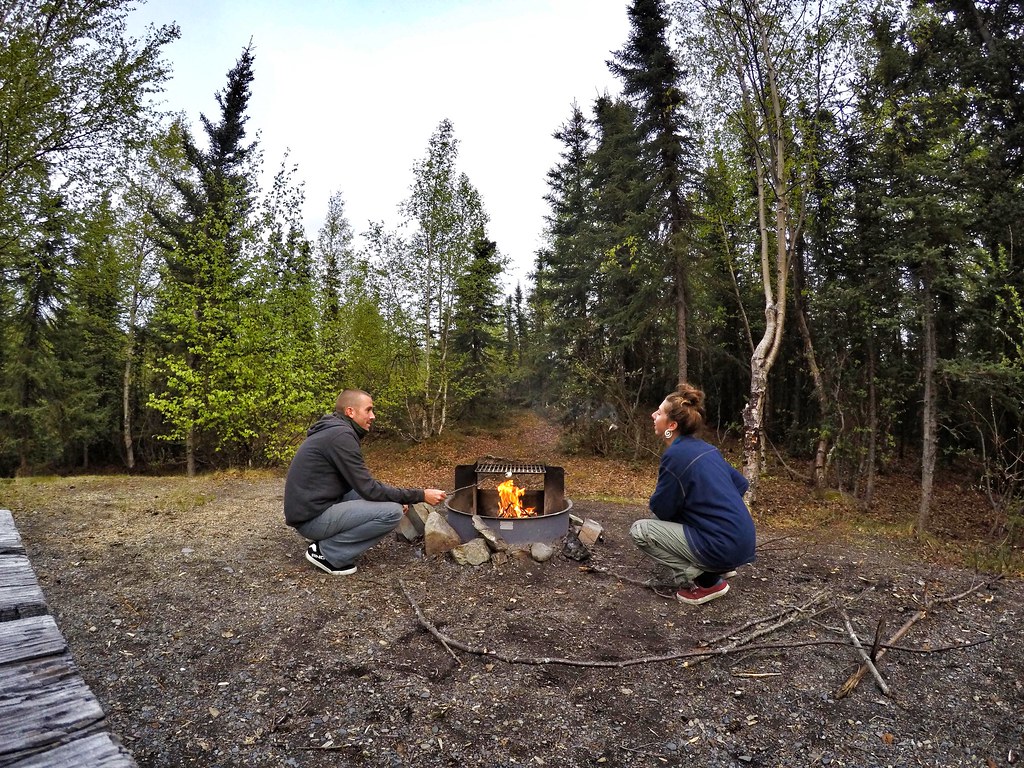 The next morning we had breaky by the lake again and then drove on to the Skilak Lake lookout trail. We were the only people on the hike and felt like we were totally in the wilderness. It left the woods and opened up for great wildlife viewing. We scanned the hills and trails and saw no signs of life, just a couple of moose prints. It was wonderfully warm when the sun came out and I said to Craig that I’d be happy just getting a pan and pouring water from the creek over me. But then as we reached the top the winds picked up and it was like being in the Arctic. We had superb views of the beautiful pale blue lake below us and mountains surrounding it. The river wound through gravel and spread across the valley till it spilled into the lake. We couldn’t believe how much wilderness we were surrounded by, the forest below us stretched for miles and was so dense. There wasn’t a house in sight, just us, the three bald eagles flying above us and the seagulls swooping around the lake. 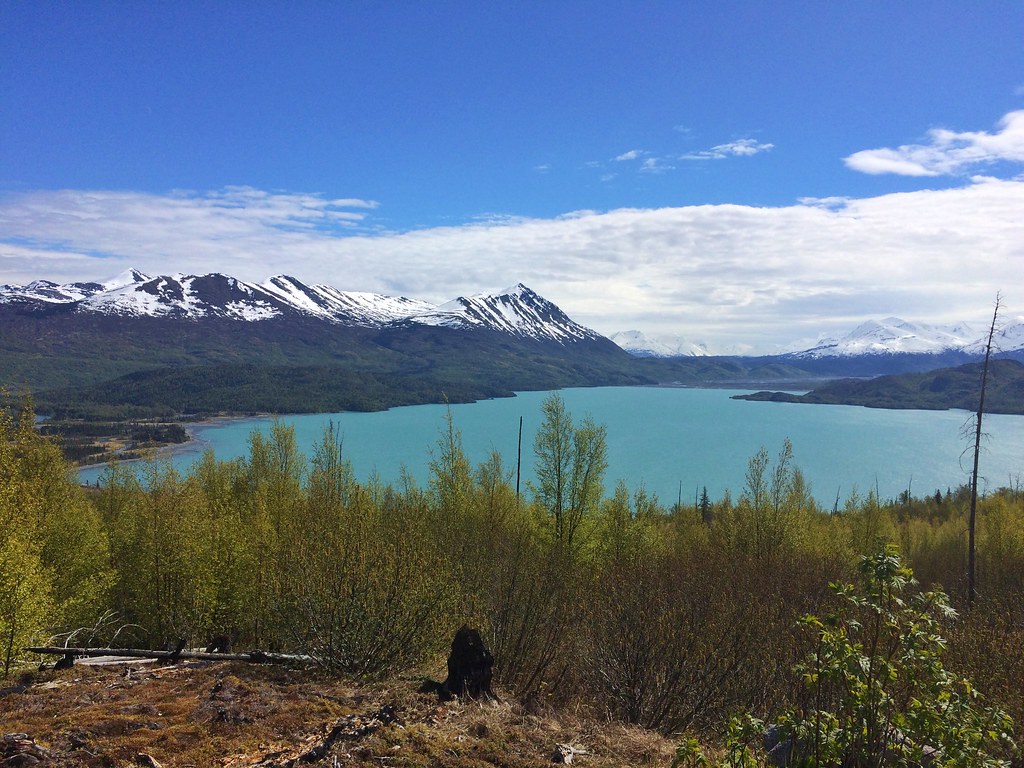 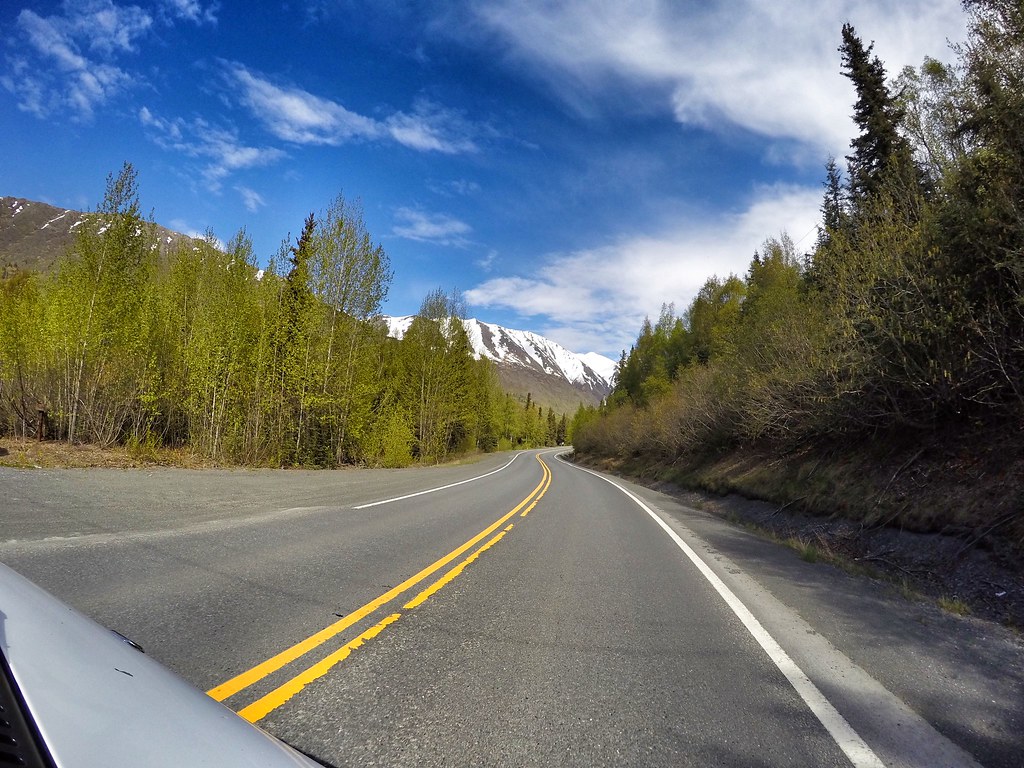 It was only on the walk back that we spotted a huge bear poo on the trail. It was riddled with black berries and albeit flattened and maybe not fresh, it was over a foot long. Suddenly we felt even more in the wild and less excited about the prospect of meeting the owner along the lonely trail. We made it back to safety and washed our feet in a creek. The water was so cold it almost traveled through our entire bodies, up to our heads and gave us brain freeze. I can’t believe I thought I could wash myself in the creek! Haaaa…what a foolish idea.

The weather was lovely so we set off back along the sterling highway towards Seward. Just a mile after leaving the trailhead though we saw a black blob beside the road. We couldn’t work out what it was and then it moved, it was a bear!!! Our first bear! Wahooo! I was so excited, Craig saw a bear in Canada from afar but I didn’t so it’s taken 8 years for this moment to happen and then the bugger looked at us and ran into the bush, noooo! I barely had enough time to look at him. We slowly moved along the road and spotted him sitting in the scrubs and looking around. We managed to get some photos and he looked right at us, then around some more before darting off into the bush and he was gone. How bloody cool, Craig and I were elated and high fived each other. We continued on our way and saw a porcupine waddling along the road, I think he’d been attacked by an animal or hit by a car as he didn’t look healthy. He looked like a homeless porcupine and was all unkept and limping with a messy face and patchy fur, poor thing. We half expected to drive another 100 meters and see a grizzly or a moose as if all the wildlife was coming out, but alas, that didn’t happen. 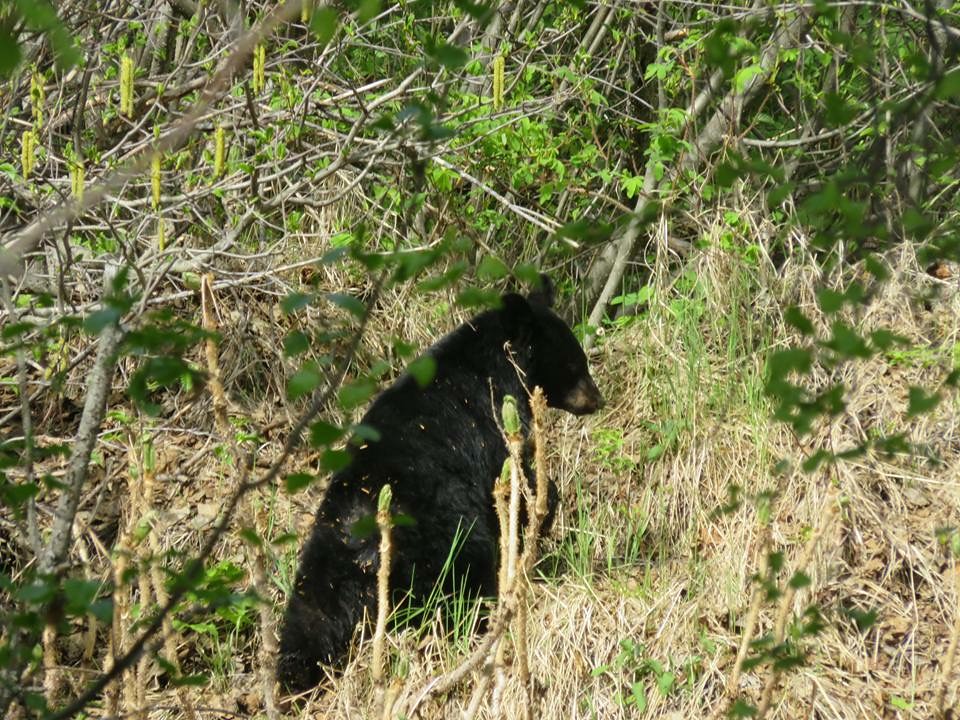