Daphne, Craig and I said farewell to Anchorage and drove east along the Seward Highway. The sky was the clearest it had been since we’d arrived in Alaska and we felt like we were constantly surrounded by mountains, probably because we were! The road wiggled along the coastline with the Turnagain Arm to our right and huge snowy peaks alongside it. Man it was a beautiful drive. Certain car parks were packed with cars and we saw fisherman lining the river. It didn’t take us long to realise that no one had rods, they were literally scooping out the fish with giant nets! 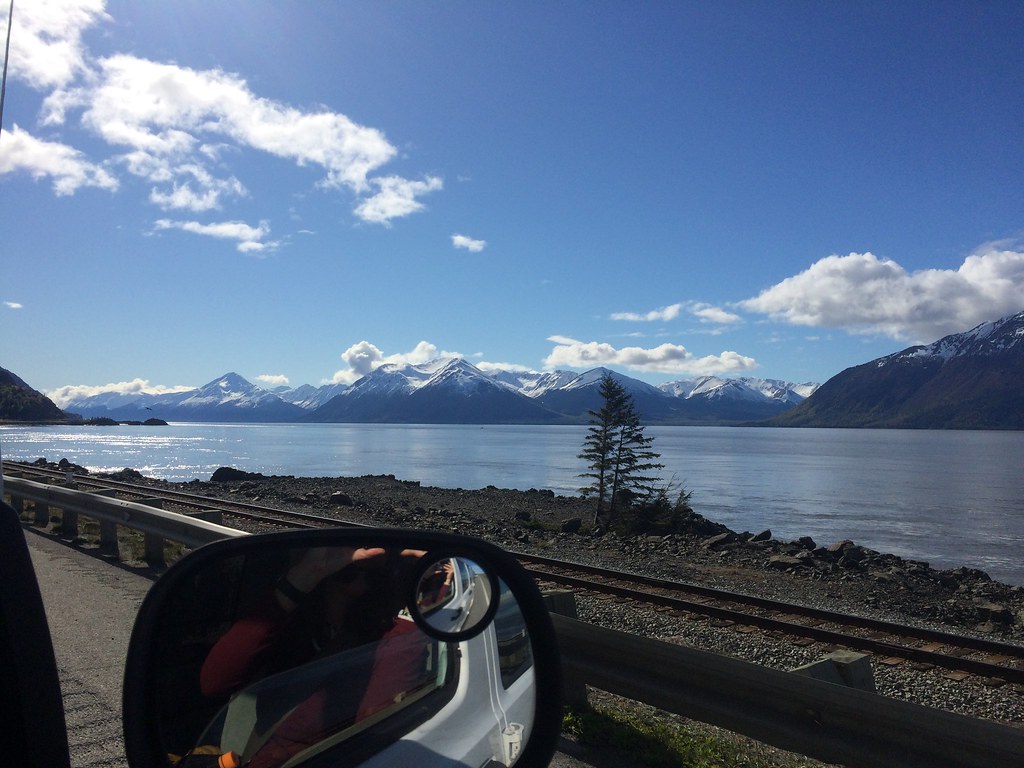 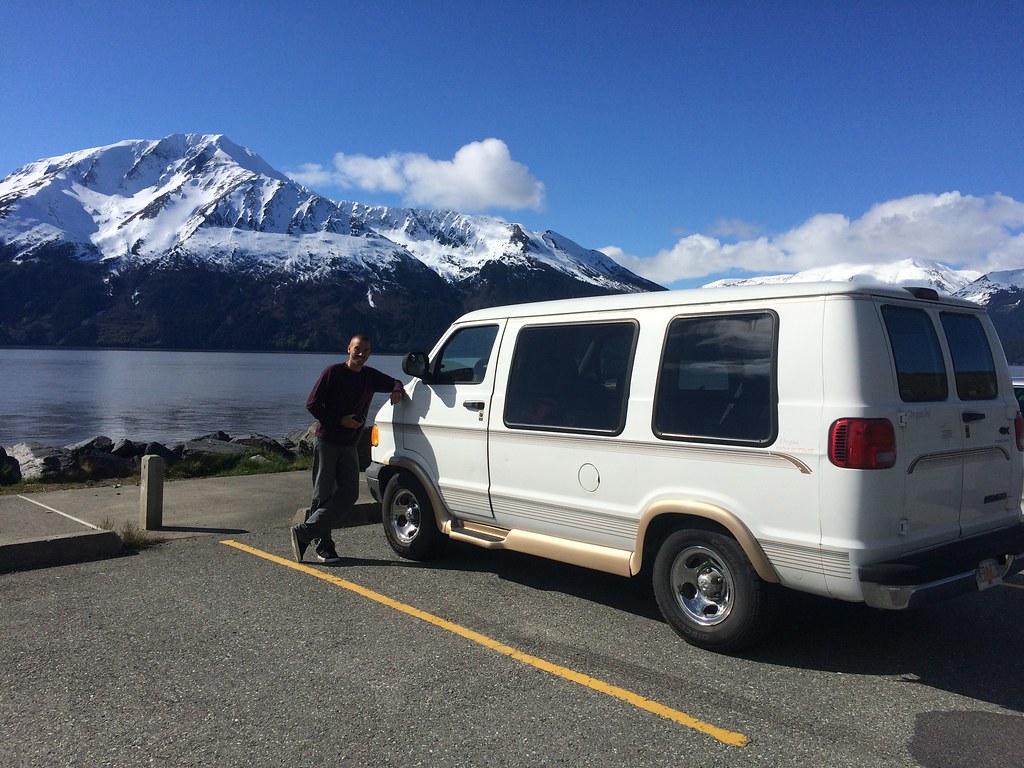 We decided to detour towards Portage and it proved to be just as scenic a route with more mountain vistas and even glaciers coming down the mountains. We pulled up at a lovely lake which reflected the mountains in it’s still waters and we had our picnic on a bench. A few locals came by to take their kids fishing along the lake and we were surprised to see a mum with two kids just casually walking around with a gun in a holster. Although it shouldn’t surprise us, a lot of Alaskans carry guns for protection from bears and apparently anyone can own a gun, you just need a license to buy one. Alaska state has 98% of the USA brown bear population, with 35,000 bears. Add another 100,000 black bears and compare that to the total Alaskan human population of 750,000, and you have a bear to human ratio of 1-5!! And there we were, ready for our first Alaskan hike and we sounded like absolute twits with our bear bells ding-a-ling-in. Our pepper spray was easy to grab from the side pouch of our backpack but it certainly didn’t give us the confidence we’d have if a gun was round our waste. Although I wouldn’t like a proper gun, just a paintball one, or maybe a potato gun, but not the English variety which has tiny potato pellets, that would just be flying treats for the bear, I’d need a New Zealand potato gun, apparently they shoot the whole potato out of a bazooka!! Until then, we just sounded like Santa’s reindeers trotting along the path. A local we met in Anchorage called Mike joked that he gets bear bells for free, he finds them in the pepper smelling bear poo! He also told us about him growing up 40 miles from the nearest road; they had dogs to protect them from bears and every Christmas from the age of about 7 would mean a new gun under the tree. If there was an emergency they would have to radio to the nearest house and so on until it reached the first town. I can’t imagine living a life so in the wild. 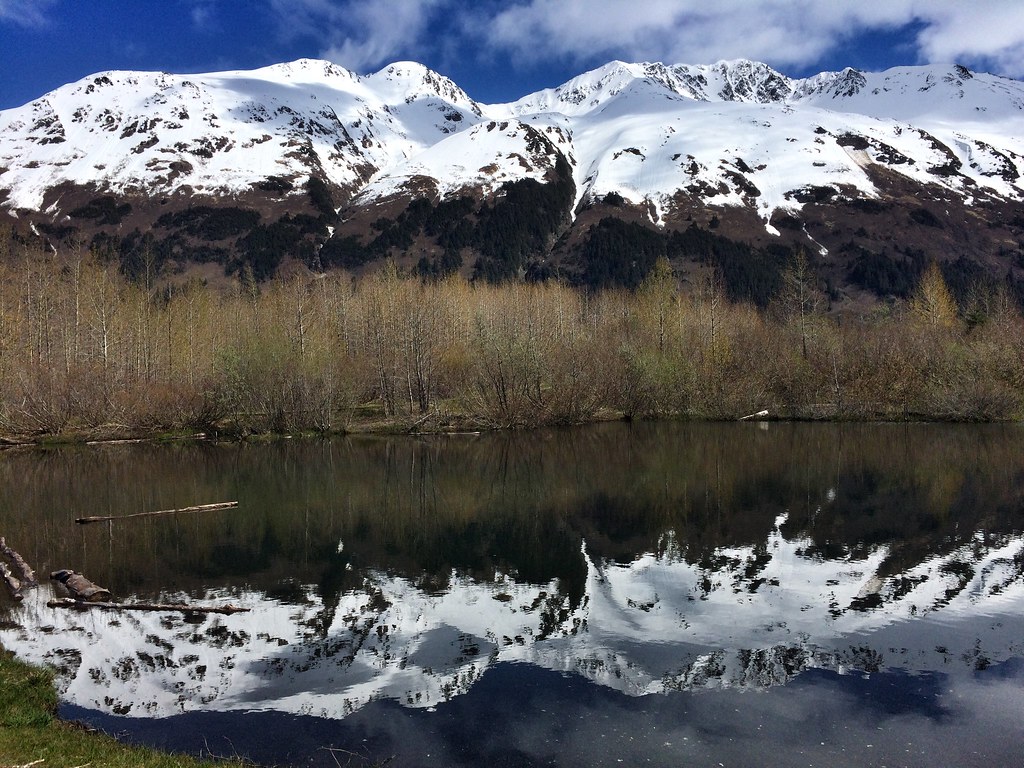 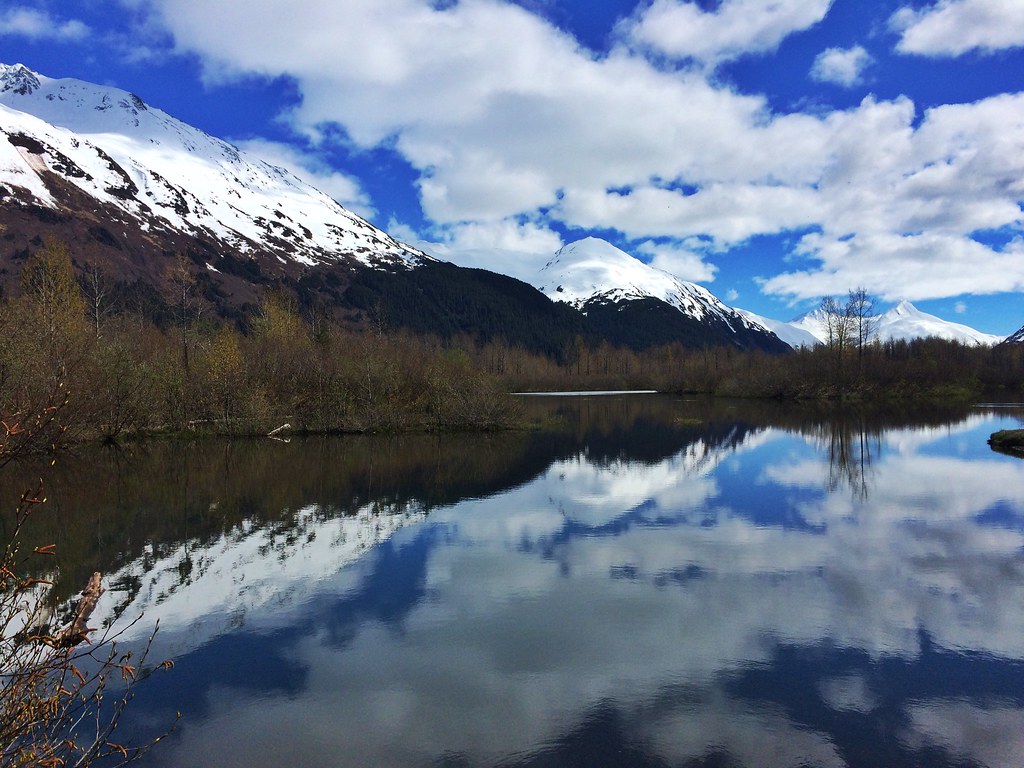 Anyway, after our walk and lunch we continued on the very scenic highway until we reached Portage Lake. A big ugly visitor centre was above the lake, it was built with a superb vantage point of the Portage Glacier but the Glacier has retreated so much that it is no longer visible from the centre. The place was closed for the season when we visited but we wandered down to the lake and there were icebergs along the shore. We managed to pick some up and they were unbelievably heavy, and very cold of course. Bigger ‘bergs’ floated further away and shimmered a blue colour. 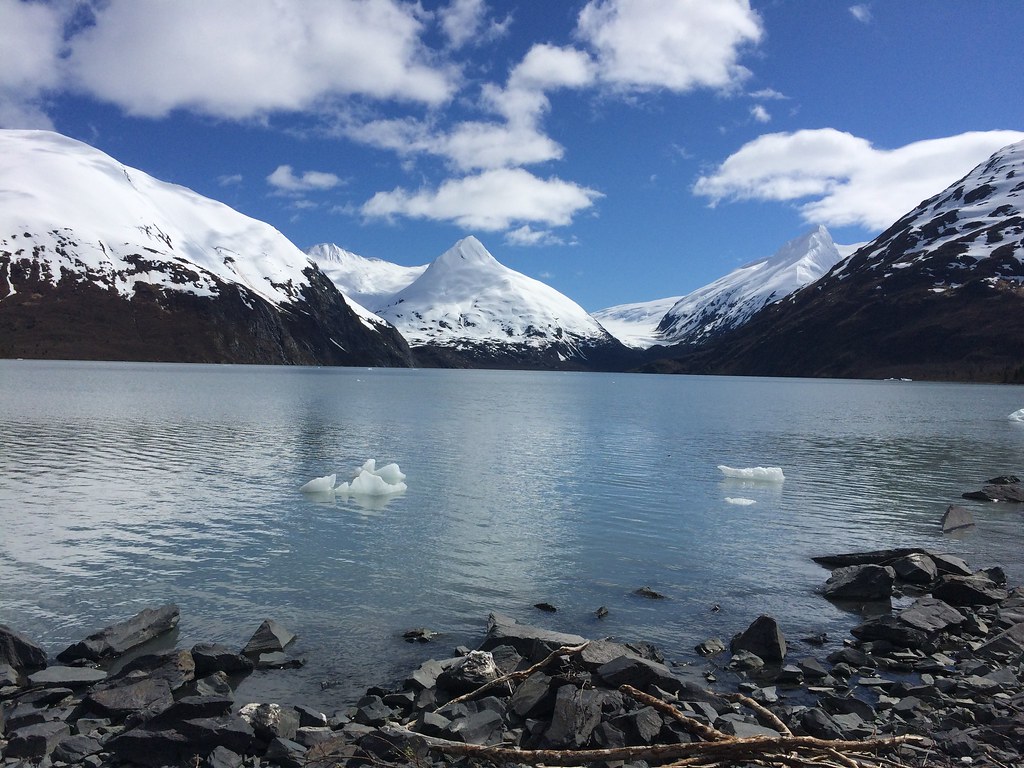 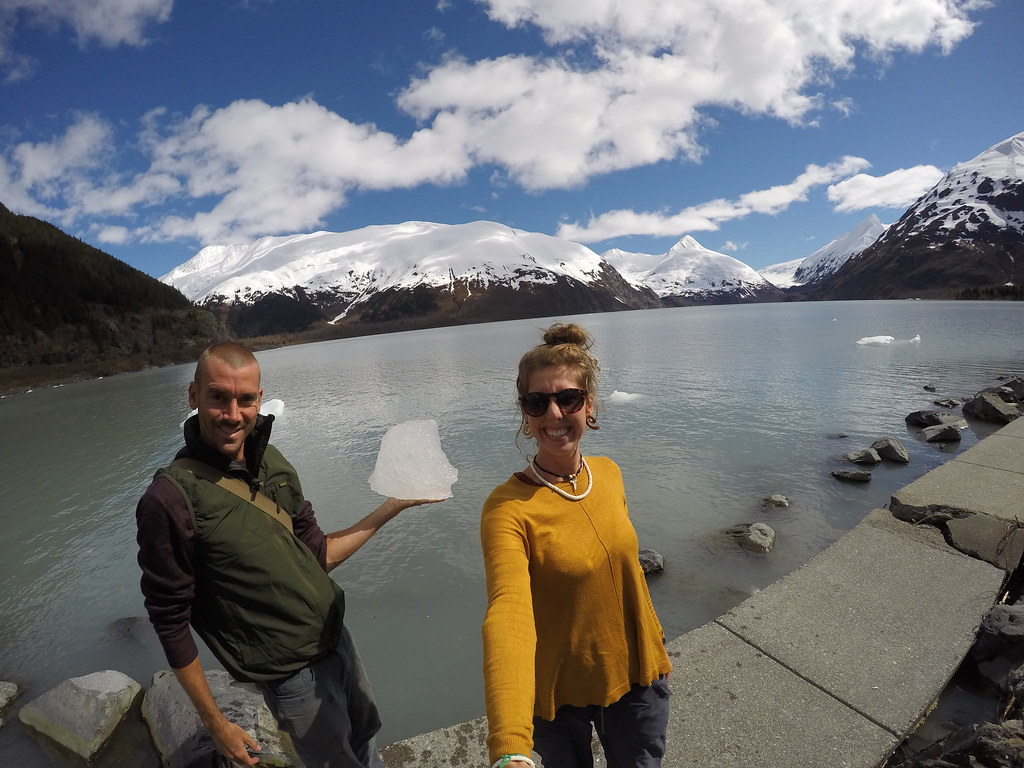 In the afternoon we hiked the easy one hour trail to view the Byron Glacier. The end of the trail had a sign saying don’t go further but everyone did. I don’t even know if it was snow or glacier but Craig stepped onto it while I stood from the sidelines admiring the mighty mass of ice ahead of us. 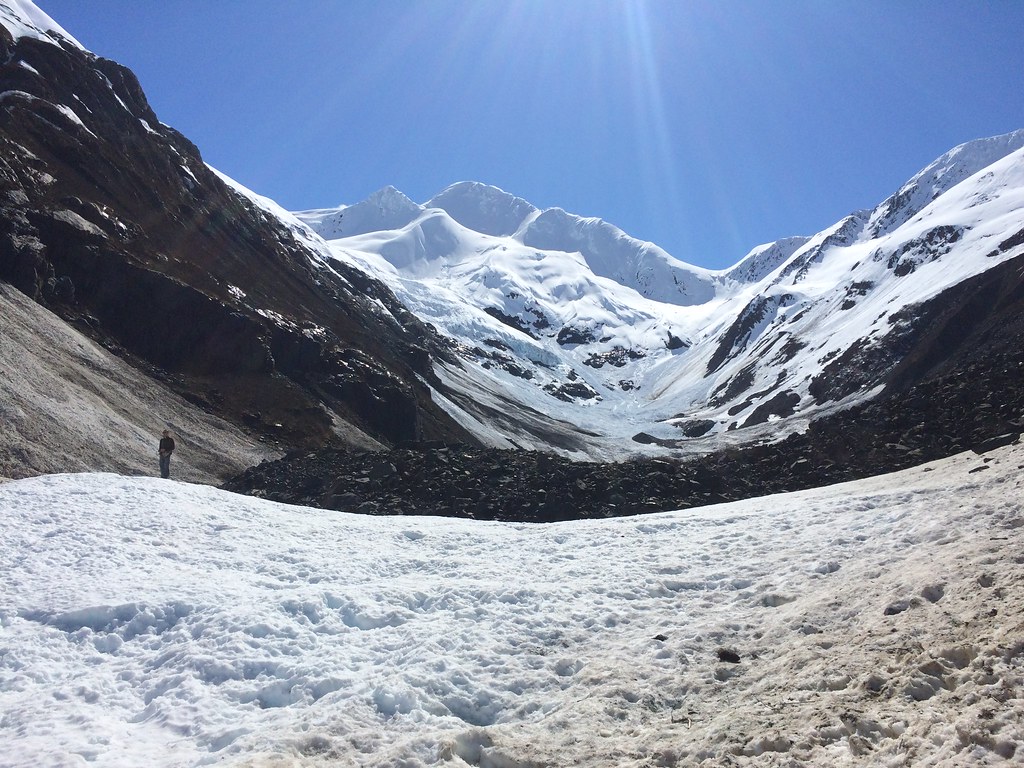 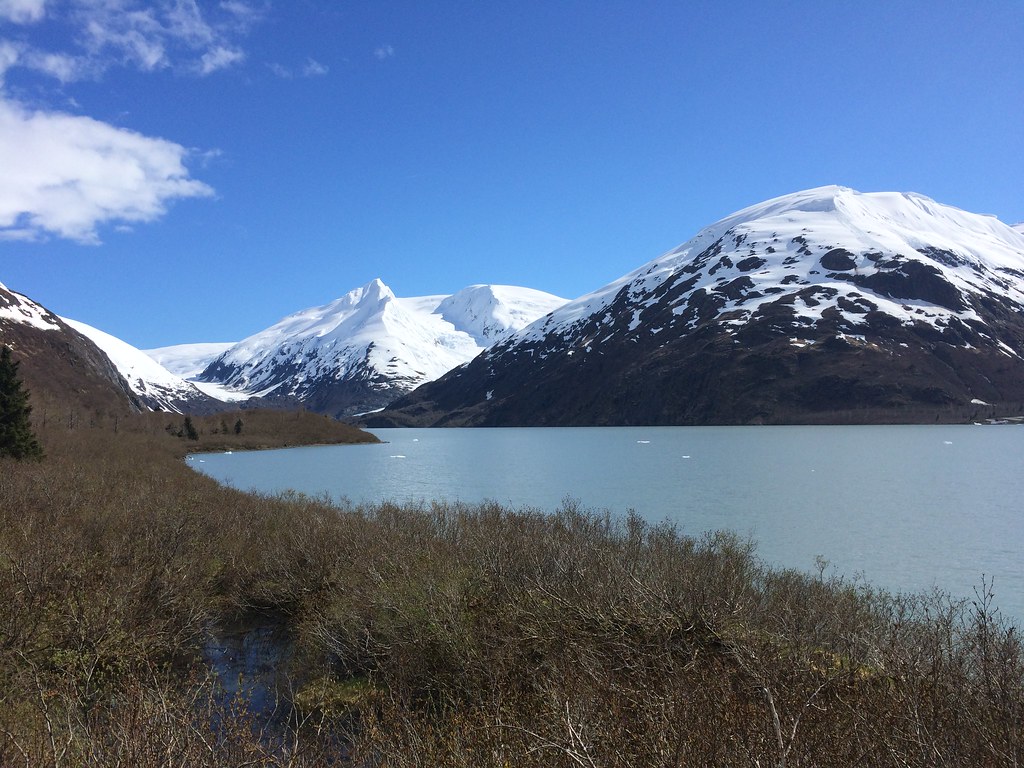 We found a pleasant spot to camp with mountain views and enjoyed our first proper night relaxing in the van. It was fairly cold but I was comfortably wrapped in my blanket and a very happy bunny. The sun was still up at 10pm and we had to force ourselves to go to bed. The blinds didn’t block out much light but luckily it didn’t keep us awake so we just closed all the curtains and tested out our very cool mood lighting. 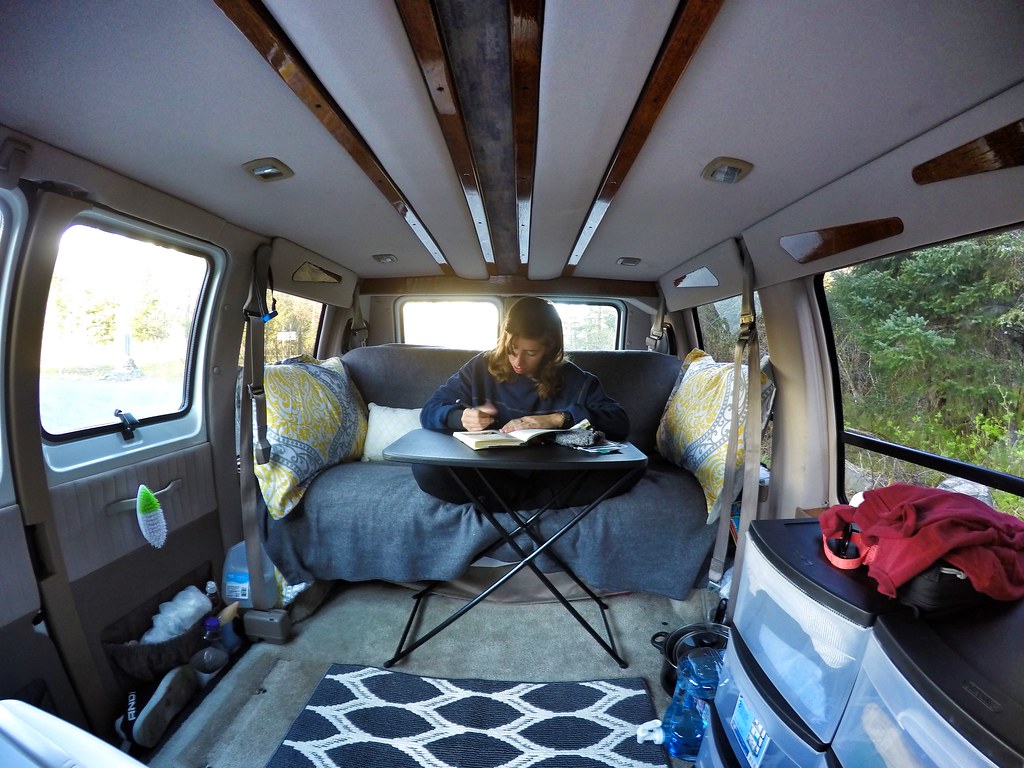 The next day was miserable weather and we spent it all at the lonely village of Hope which has a population of 147. It was a gold rush town which boomed and needed a name so the workers decided to name it after the next man that arrived by boat, it was Percy Hope and the town was born. The word town is a bit far fetched for this place…we drove past it and didn’t even realise we’d missed the place. Amazingly there was actually a ‘Main Street’, the name made us laugh as it was trying to be like a city, with ‘A Street’ as well. There was a cafe and a tiny pub which couldn’t of fitted more than a dozen people inside. None of the shops were open yet for the season so it really felt like a ghost town. Lonely Planet made it sound so cool but it just didn’t live up to it for us at that time of year. A lone dog walked along Main Street and I half expected a tumble weed to go by as well. The buildings were very cute though, lots of sweet log cabin homes. Luckily they had a library which was open and an attached shed with second hand books for sale so I now have myself a prehistoric Alaskan atlas and an equally old Milepost book. There was a lovely campground at the end of the road which wasn’t offering services till the season kicked off but we could stay for free – we’ve found this with a lot of the forest department campsites so it’s a nice change for us to stay in a cute camp spot for free with picnic table and fire pit and not have any crowds. 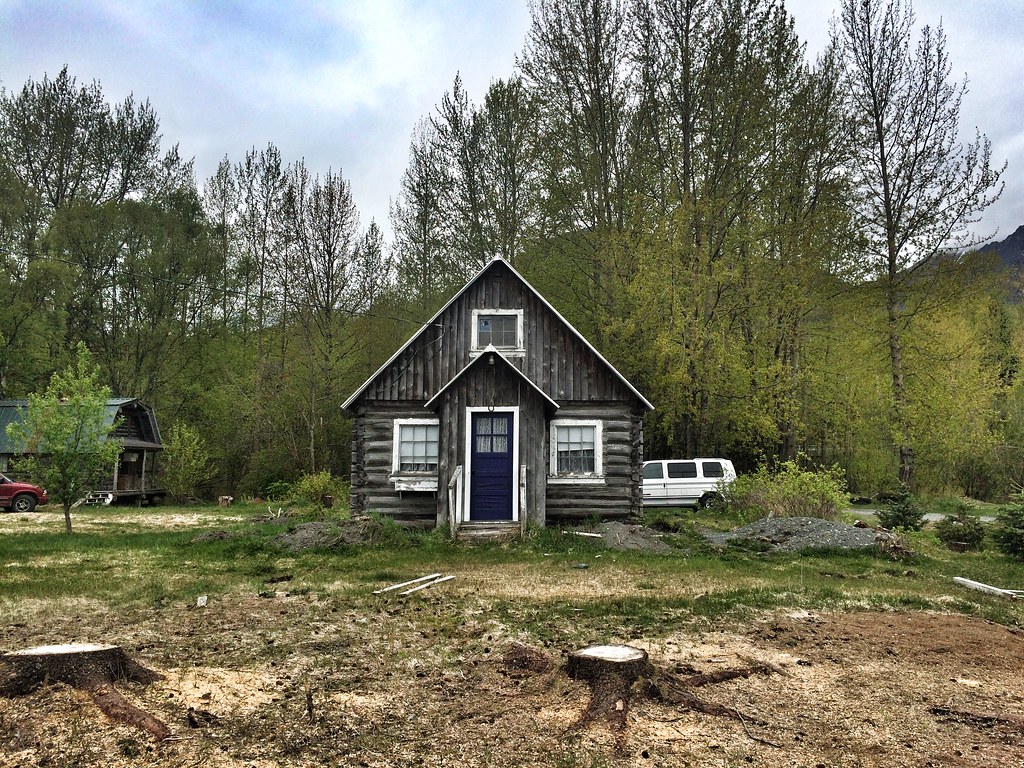