We ended up spending four days in Anchorage converting Daphne from a passenger van into a home. She will be our 5th van conversion and I feel like we are almost pros at it now. We scrubbed, shampooed and hoovered the carpet, gave her a good clean on the inside and outside, and then spent most of our days in and out of Walmart. We measured items and filled the trolley with bedding, water canisters, stove, cooking utensils and storage units. For our first night we just shoved everything into Daphne and drove out of the city to Lake Hood. It was a beautiful spot near the airport and was home to hundreds of float planes. We had mountain views across the lake and enjoyed watching the float planes flying above us. We made some room big enough to swing a kitten so that Craig could cook dinner whilst I unpacked our backpacks putting everything into draws and making the bed up. Home sweet home. 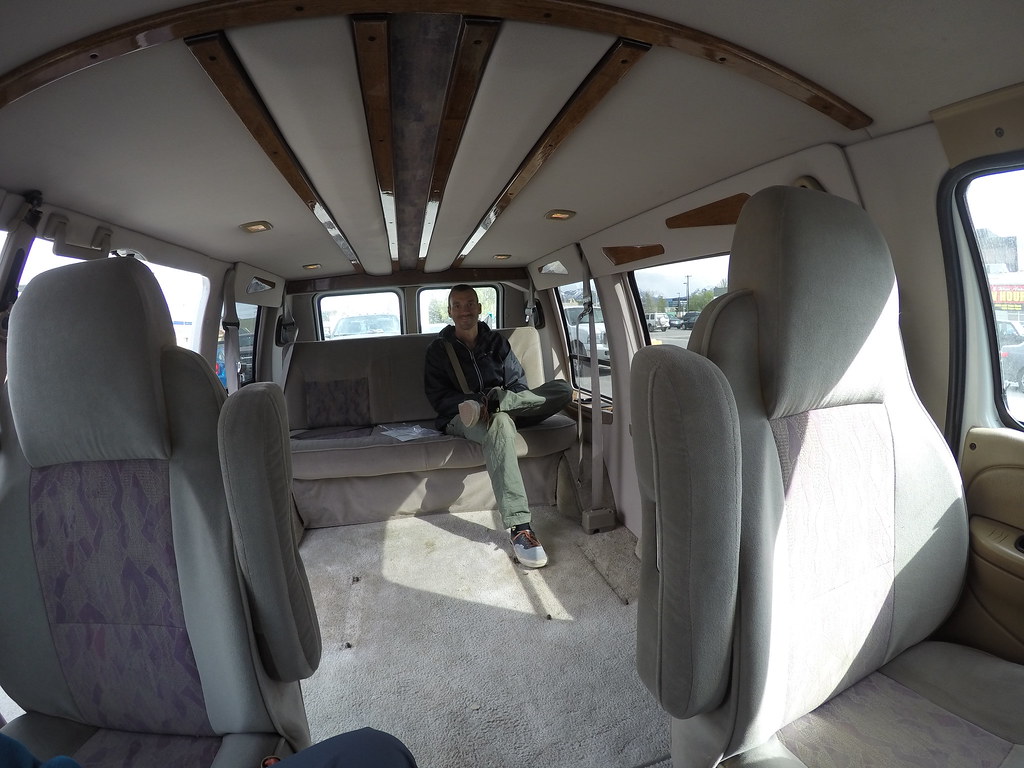 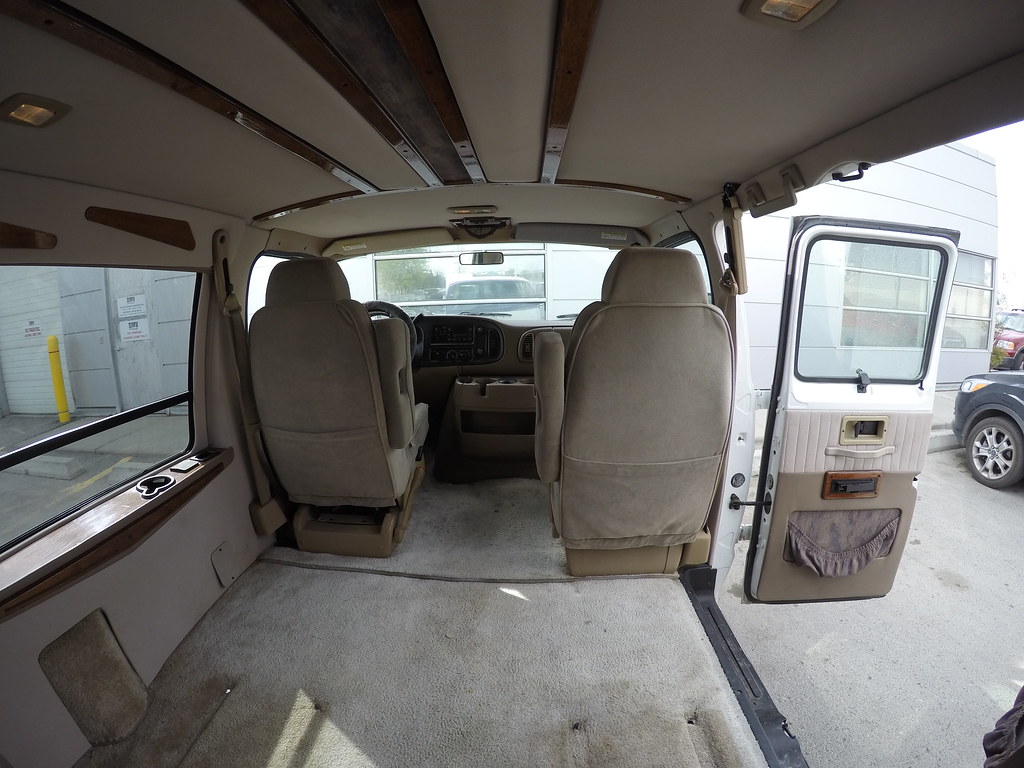 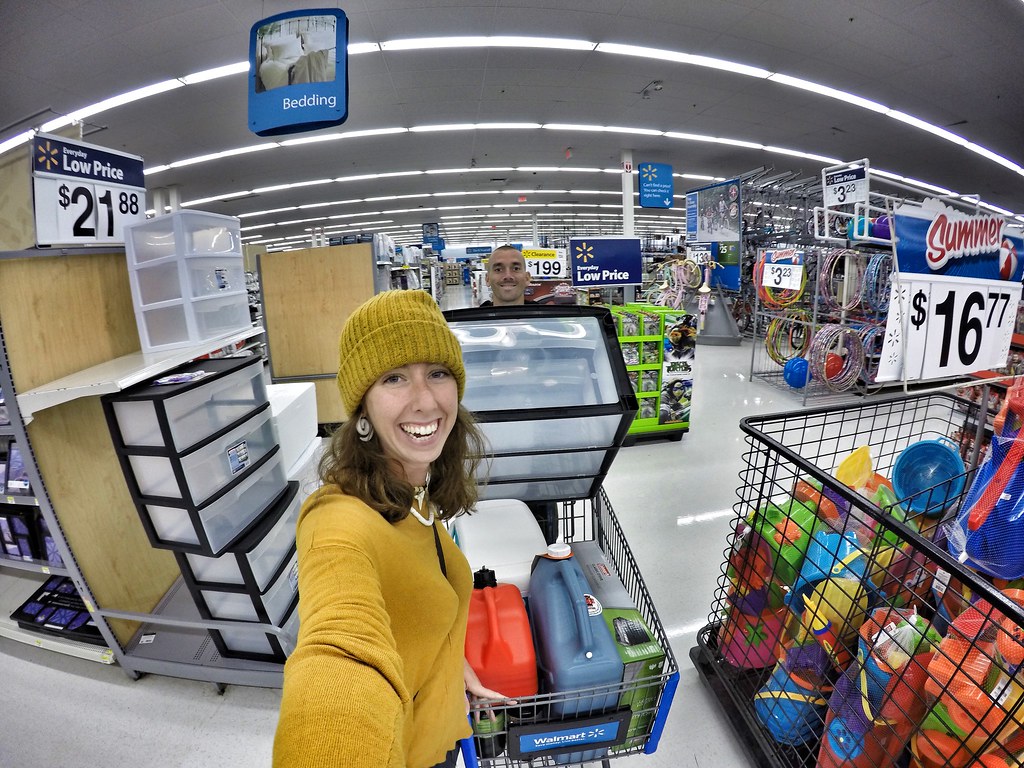 Our three large windows have amazing pull down blinds but the other windows weren’t covered at all so for our first night we shoved sarongs and towels up. When we finally put our heads down to sleep bright blue and red lights began flashing through the sarong. It was the police, in case you hadn’t guessed, not a midnight disco. The van was a total mess when I opened the door and Craig and I looked like ninjas in our all black thermal underwear. The officer was very nice though and explained that all park areas in Anchorage are closed from 11pm. We really didn’t fancy spending our first night in a Walmart car park when there’s so much wilderness around the city so the officer suggested some good spots along the Seward Highway. They checked our ID back at their car and saw we weren’t criminals on the run so we were safe to go. It didn’t take long to escape the traffic and be surrounded by nature. We found a lovely small parking lot beside a marshy area to sleep at. 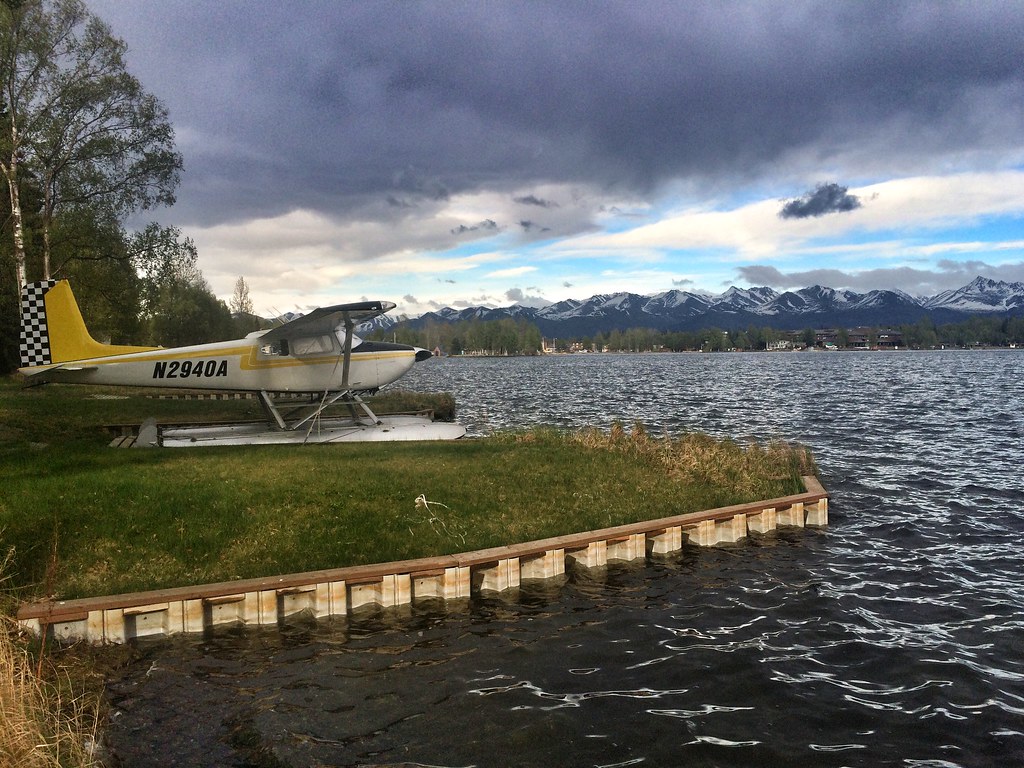 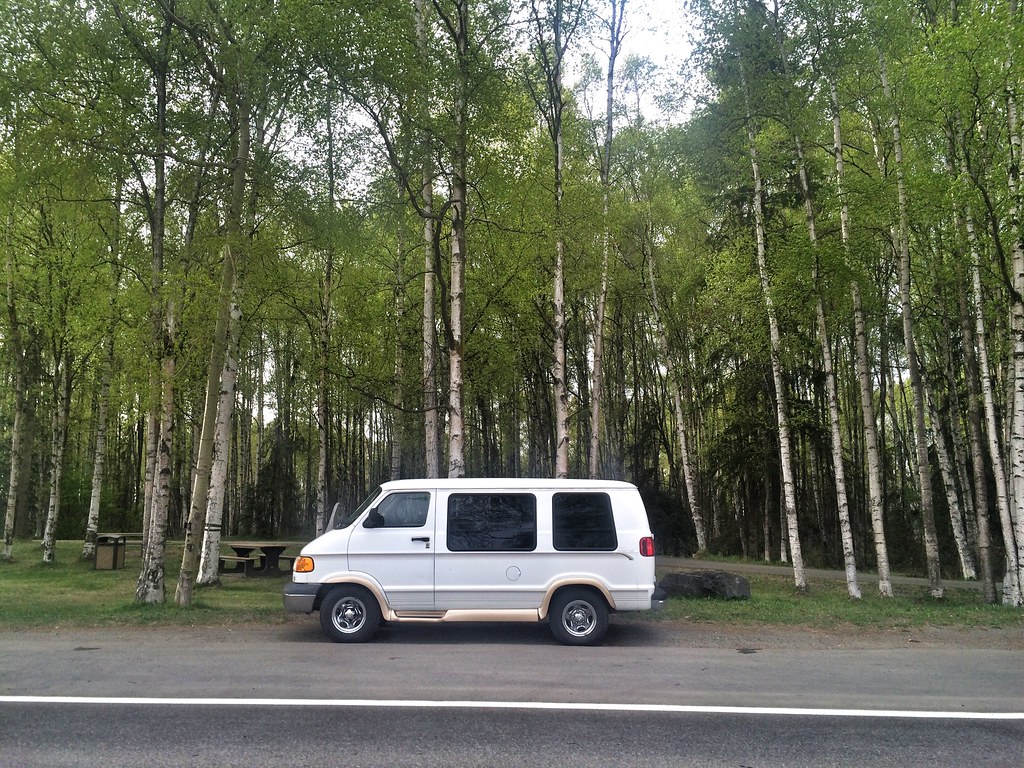 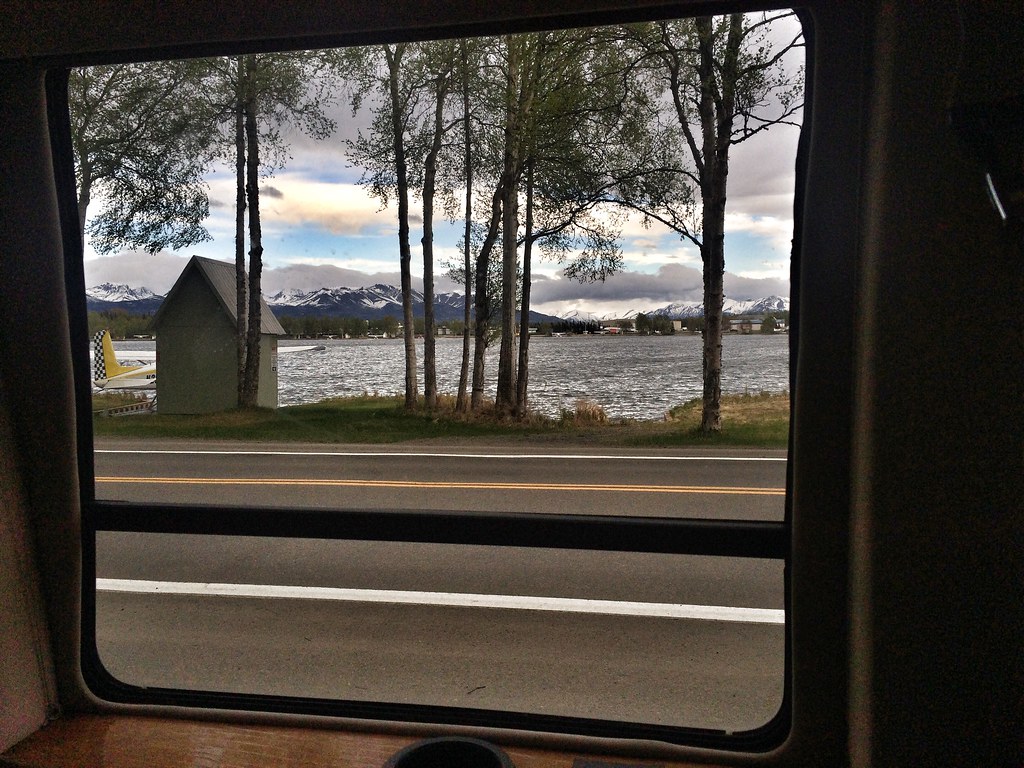 When we woke there were two moose grazing in the marsh near us which was pretty cool! Our first Alaskan moose! We both slept OK but the bed was very small and I felt like I would fall off at any moment. We decided to make a narrow bench to go in the 15cm gap at the back of the van and cover it with foam. We headed to Home Depot and picked out a plank of wood, then a very friendly worker called Eric seriously helped us out. He cut our wood to size and then we chatted about how just hammering nails in wouldn’t be a great fix, screwing would be better but of course we didn’t have a drill so that was a no-go. But Eric went out of his way to help us and grabbed the store drill putting 6 screws in place and the bed extension was complete. We used a bread knife to cut the foam slabs and couldn’t believe how well it all fitted, plus the wood only cost $3.40, what a bargain. You would not believe how much better we are sleeping with just an extra 7cm each. It’s the little things in life! 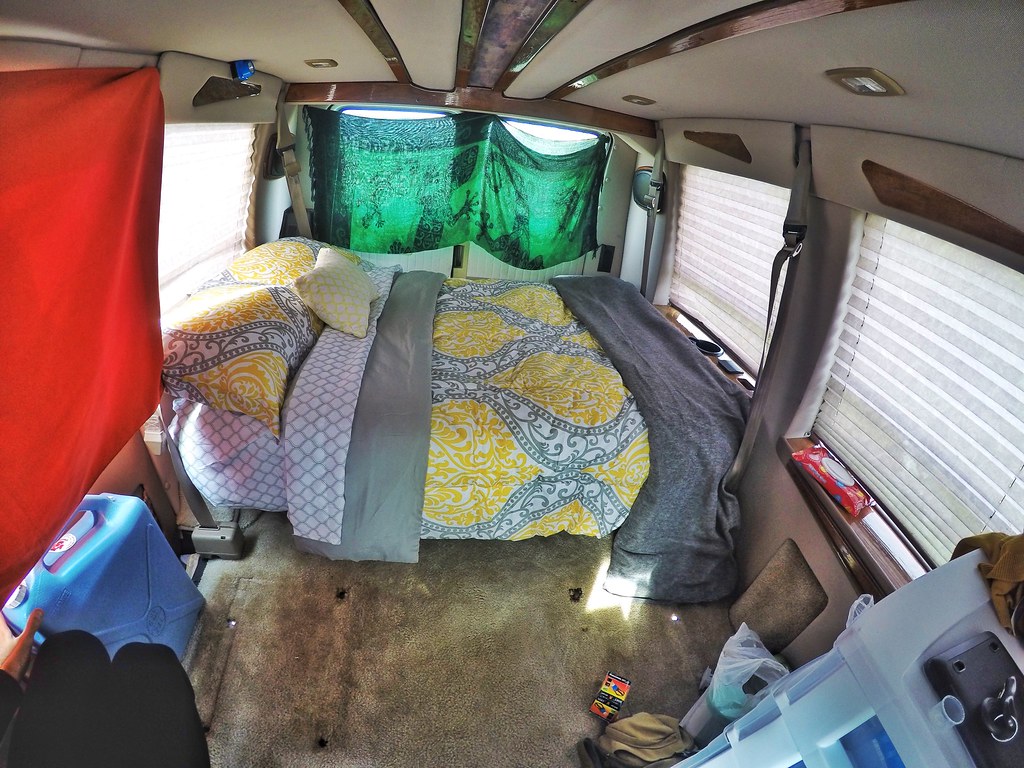 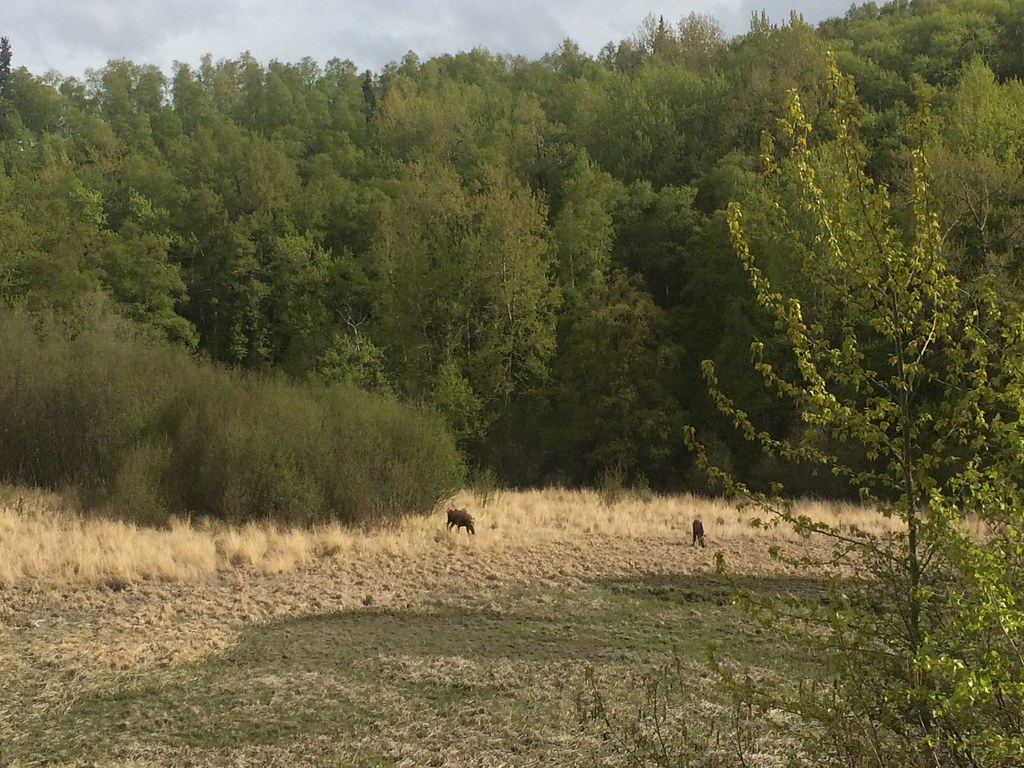 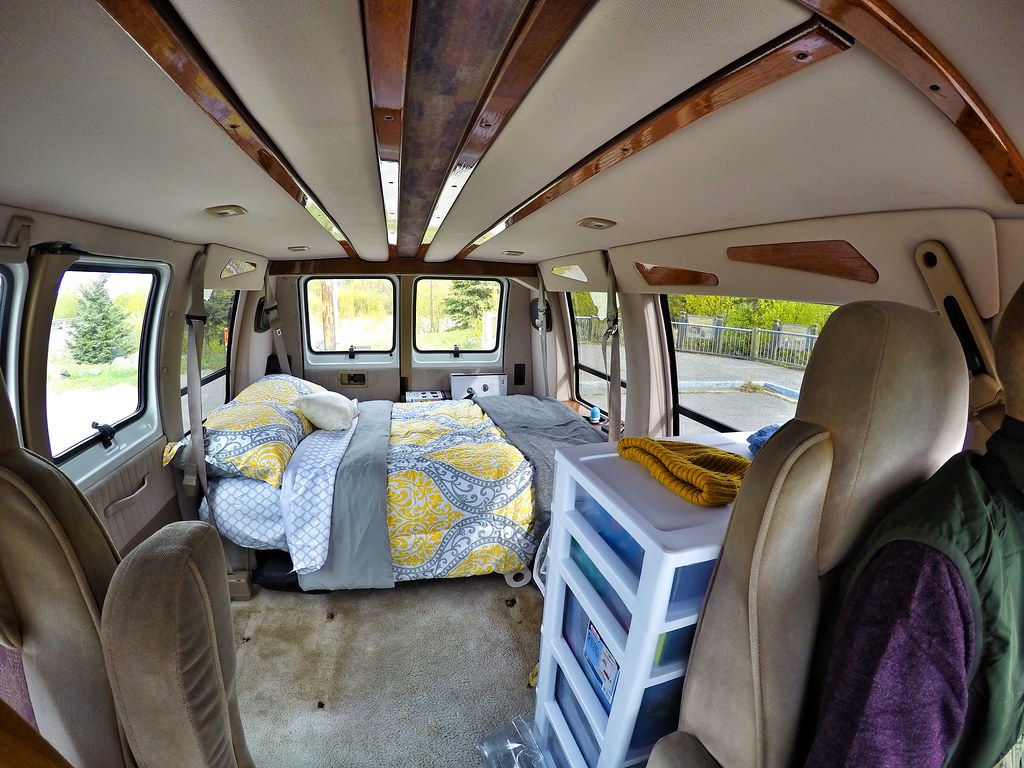 Our next project was the curtains. We bought two block out curtain panels. One was very simply cut in half and we got a tension pole to go behind our drivers seats where the two pieces can glide along. It was very basic but fitted perfectly and looked good. For the other four windows on the side and back doors we cut four squares and where we’d normally use sticky Velcro, this time we used magnetic tape. We put a long strip across the top and a couple pieces on each side and it was complete. Well it took a long time in the end as the tape was supposed to have one adhesive side but it was very weak so we had to use glue and the first bottle took 24hrs to set! So then we bought another type which took 30 minutes to dry and the van was a mess with curtain panels everywhere. It worked great though and is a very effective way of putting curtains in a campervan with metal window edges. 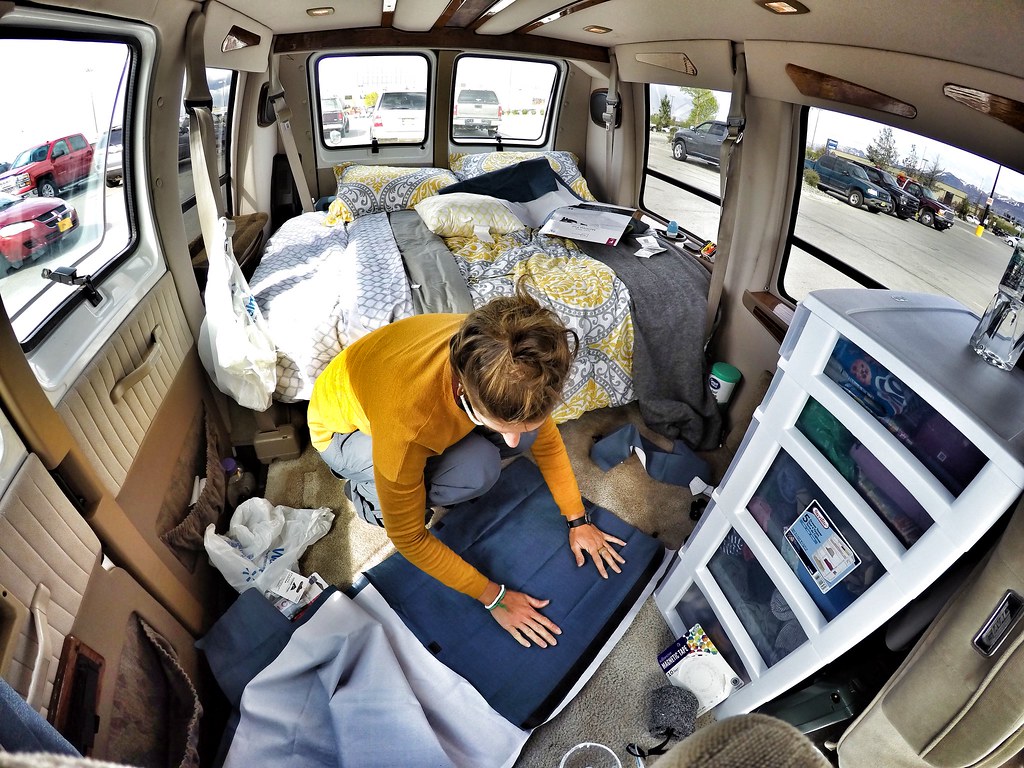 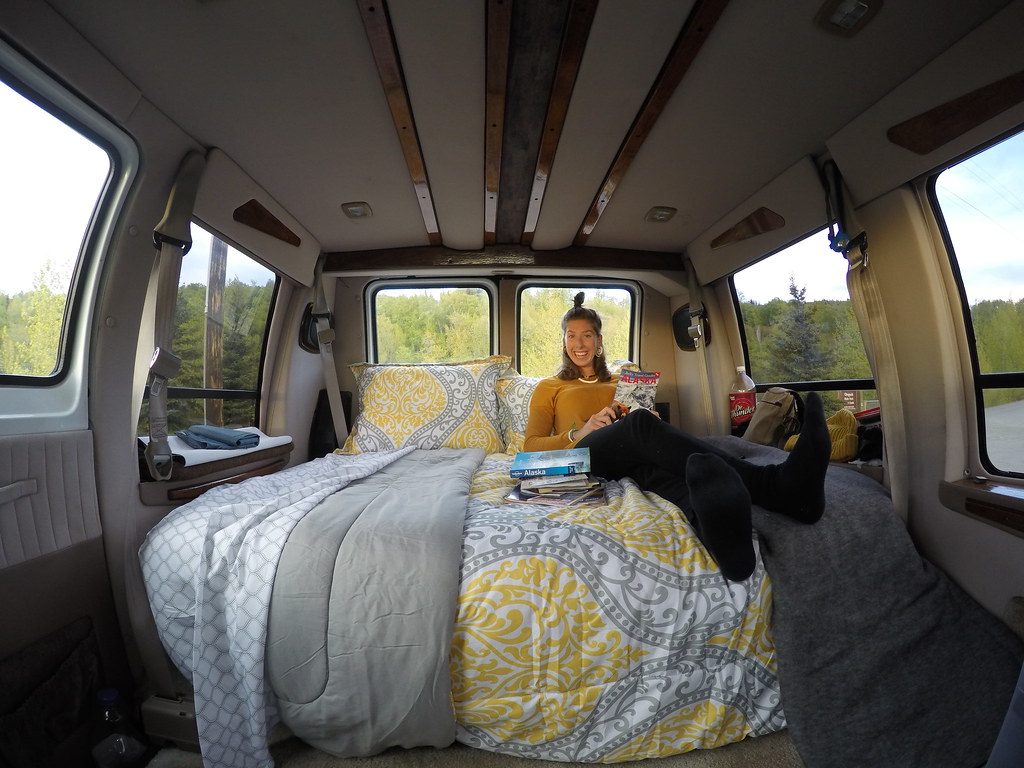 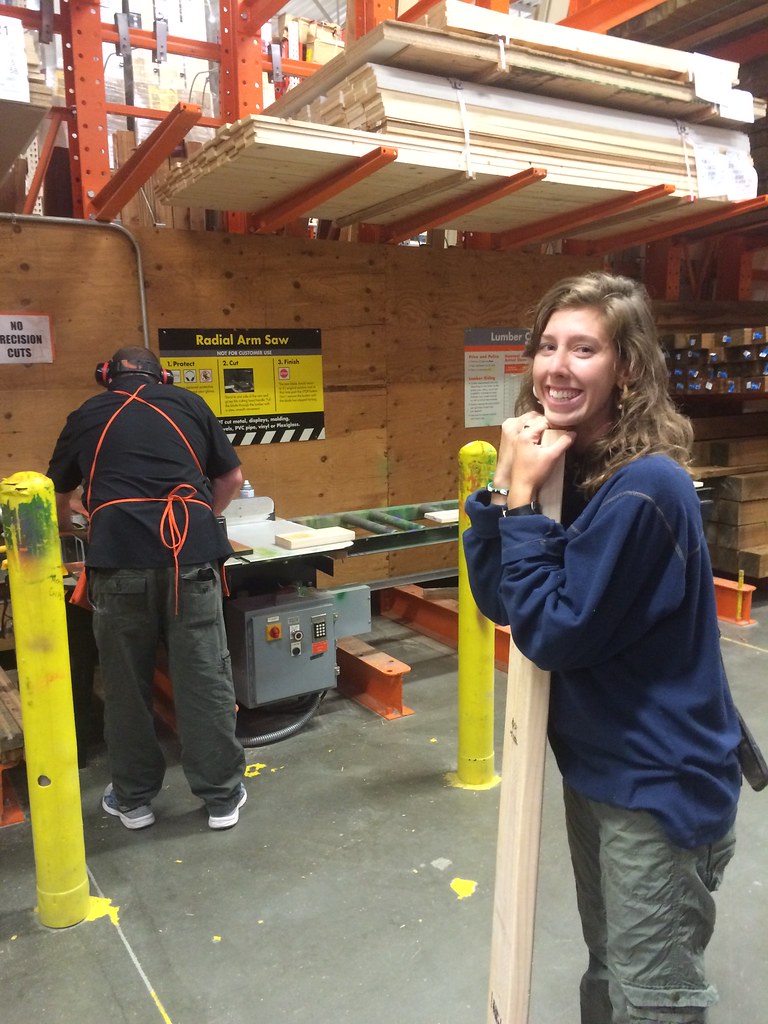 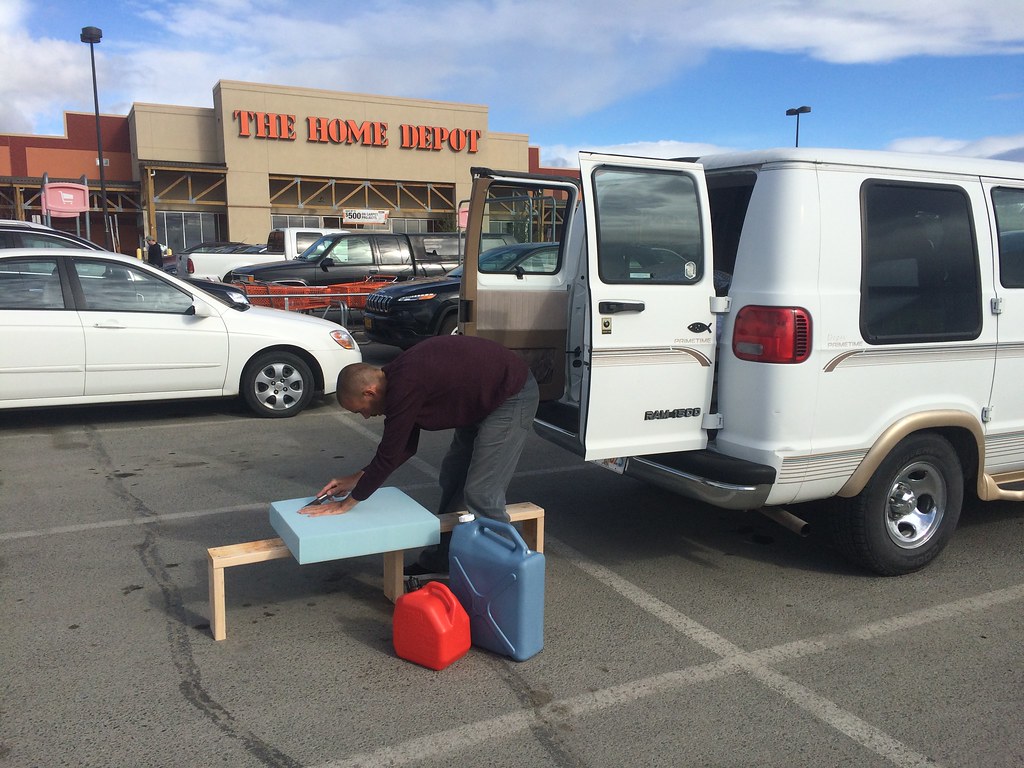 Another issue we had was the four huge bolts sticking out the carpet. They were impossible to get to under the van thanks to gas tanks and other bits I can’t even name. We thought about sawing them but the ground around them was too raised. So without having to buy an industrial bolt-cutter we were left with one option….hide the problem. So we got some padded fabric and cut a hole for the bolt to go through and then piled the fabric up to soften the blow if we step on them. Then we covered the monstrosity with a nice new rug that Craig burnt with a hot pan on day two. 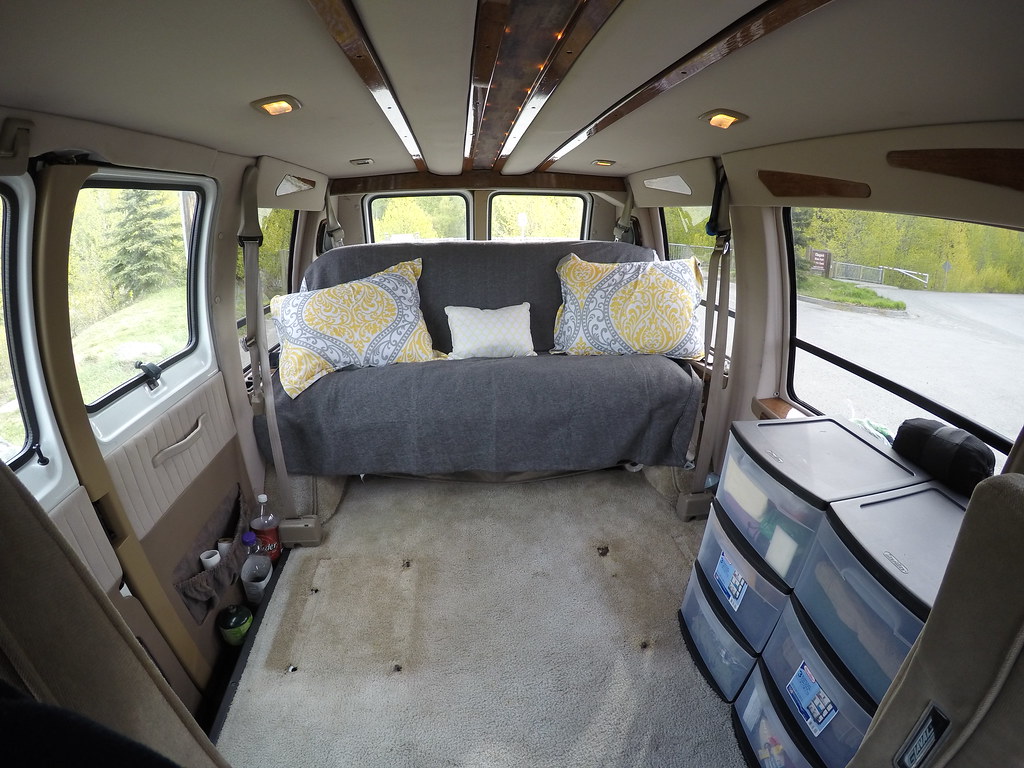 Most nights we stayed in the same area along the Seward highway and we were lucky to be visited by moose on a few more occasions. One night a mum, dad and baby crossed the road right by us and got crazily close. I wasn’t scared at all but I probably should of been, as a mama moose can be very dangerous and unpredictable. 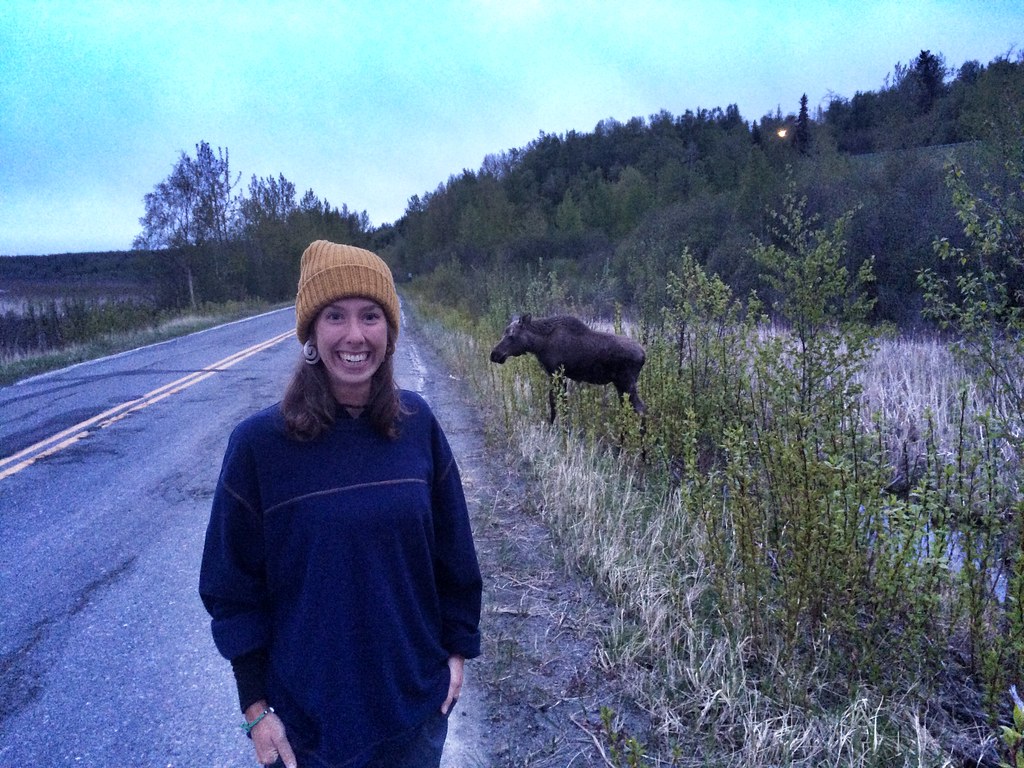 Craig had managed to fix a leak under the van and top up the fluids but we wanted to add more oil and didn’t know what the previous owner had been using. Our safest bet was to have a total oil change which cost us quite a lot but they offered a free top up service so that was a plus. When we went to leave the garage Daphne wouldn’t start. She made a horrible noise and nothing but the noise would happen when we turned the ignition. Craig and I looked in horror at one another! Noooo! We got the mechanic out and he said it sounded like the battery wasn’t connected so he nudged the cable and when we went to turn the keys she stopped making the noise, started up fine and then died instantly, over and over again. No matter how much gas we gave her she just wouldn’t stay on and Craig and I were fuming, man we have such bad luck with mechanics!! The guys boss came over and looked utterly dumb-founded saying “I don’t know, I just change oil” brilliant! After five minutes the nice worker had an idea that it could be the fuel filter, he tried turning the ignition and all of a sudden she worked. It was weird. He said it could happen anytime as its probably got really old filters and gas and we’re lucky it happened here and not in the middle of nowhere. He suggested we drive to the mechanics across the road to get it checked out. We explained the issue and the bloke very confidently said there was no chance it was the fuel. He said Dodge vehicles have a computer system where they have to sort of learn how to do everything. So because someone had knocked our battery the computer had been reset and had forgotten how to sit in idle. She just needed to learn her idle point again. And it all made sense really, so we didn’t have to get anything fixed and she was ready to finally leave Anchorage. We had been continuously bumping into our Spanish friends while in the city and enjoyed comparing van interiors and funny stories. Their fuel gauge doesn’t actually work and they found out when they ran out of gas at the top of a hill! When we saw them in Walmart they were buying a huge gas canister just incase it happened again. We both finished up our vans on the same day and headed south to the Kenai Peninsular ready for the adventures to begin. 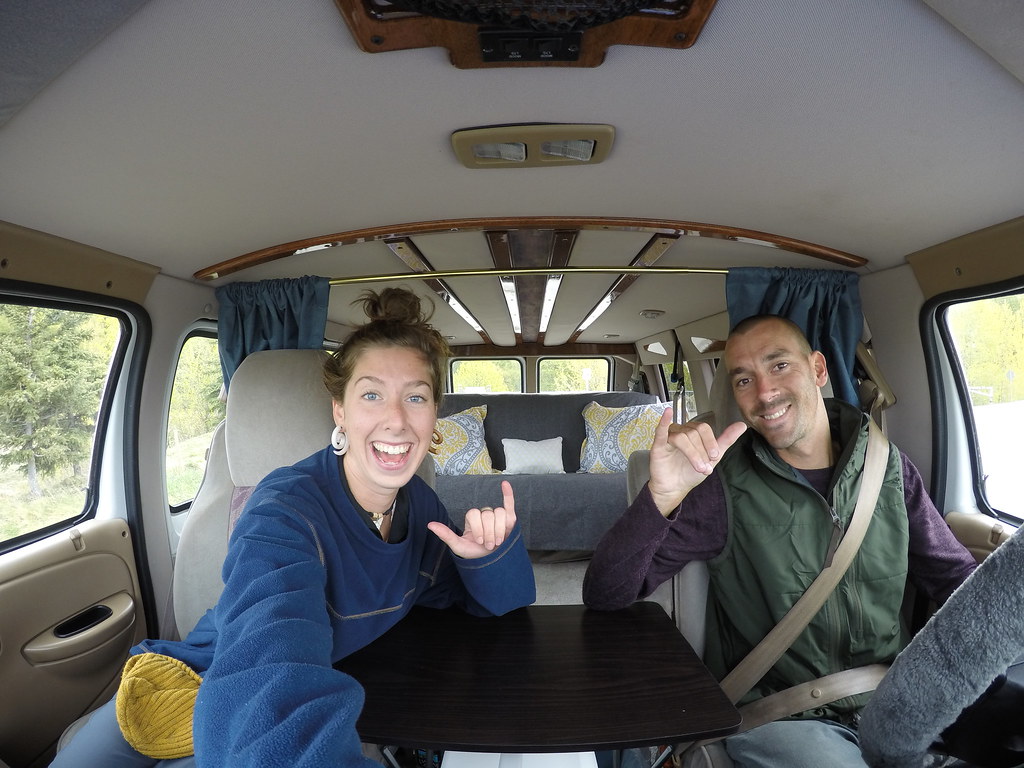