We arrived at Hanauma Bay an hour later than planned thanks to us missing the bus, not just missing it but watching it go past on the road parallel to us. Brilliant.

Hanauma bay was formed in a volcano cone beside the coast and over time seawater has flooded it creating a diverse area for marine life. The bus dropped us off above the bay so we had great views down to the perfectly curved sweep of beach and huge areas of reef submerged under the clear sea. Amongst the beautiful scenery was hundreds of tourists. The beach was packed out and the sea full of snorkelers, lots of them clearly standing on the reef. We had to pay $7.50 entry fee and watch a video explaining how the bay was created and a dummies guide to snorkelling. It was like a presentation from the 80’s and for foreigners who didn’t speak good English it was rather misleading showing people actually standing on the reef. Why doesn’t it show a person on the sand instead and explain it that way? Anyway, it annoyed us and we thought the staff should really be sent into the water to fine everyone who was standing on the reef. The bay must get so much abuse from over use and lack of care. 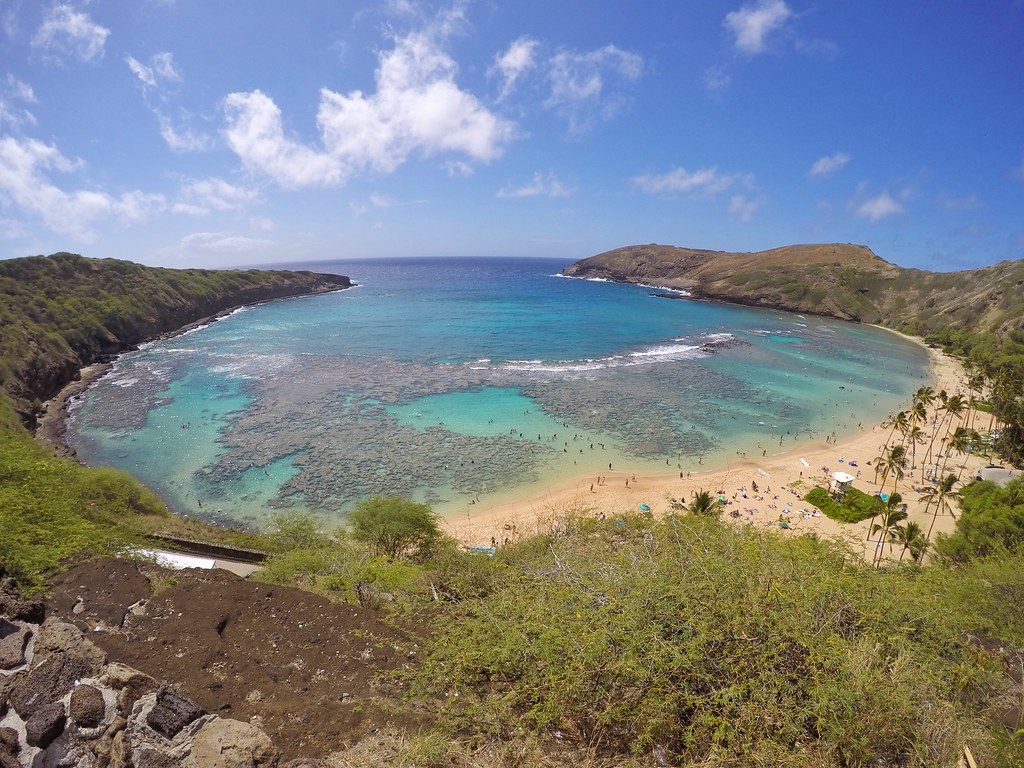 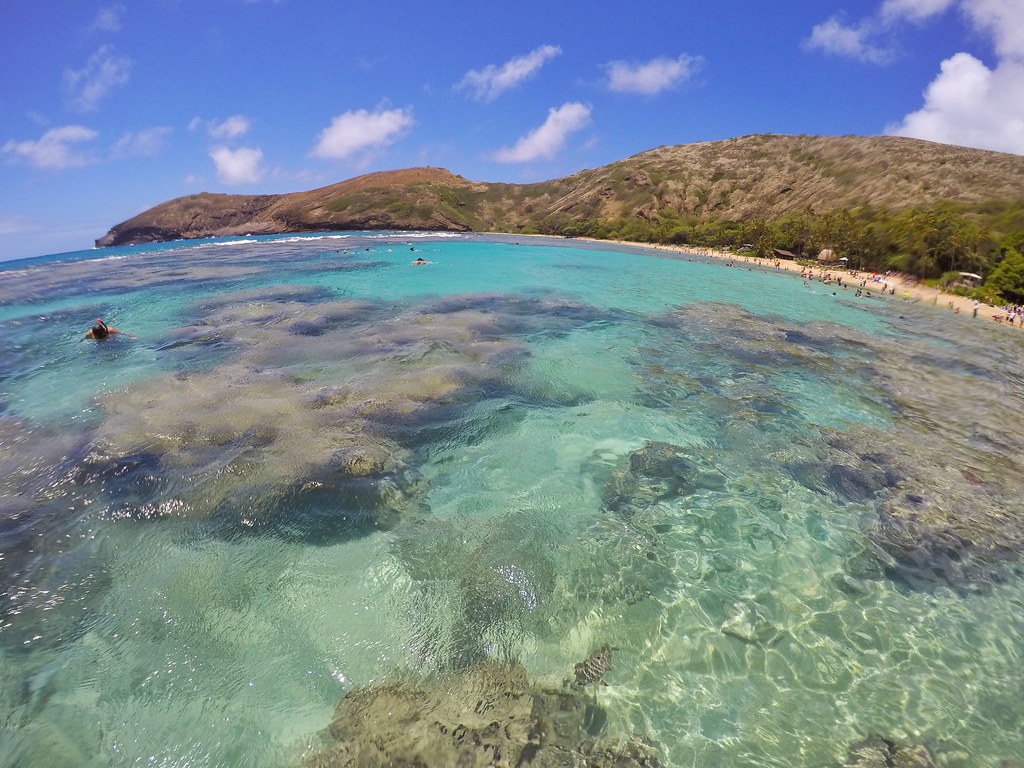 Rant over. We got our goggles on and went into the chilly waters. The sea was nice and clear but the reef wasn’t exactly reef as we knew it. It was more like rocks with a layer of algae. The fish clearly loved it though and we were surprised at the varieties we were seeing; huge multicoloured parrot fish, wrasses, and other ones were reaching a foot or more in length. Occasionally we’d stumble across a shoal of white fish munching on the rocks. The water was very shallow over the rocks and we’d swim over them only to find ourselves trapped in a hole where the rock sunk in and having to wait for a wave to rise the water levels and swim out. It was a nice change from the other snorkel sites we’d been to in Hawaii, still no colourful coral but the fish were almost as good as the ones we saw on the Great Barrier Reef. 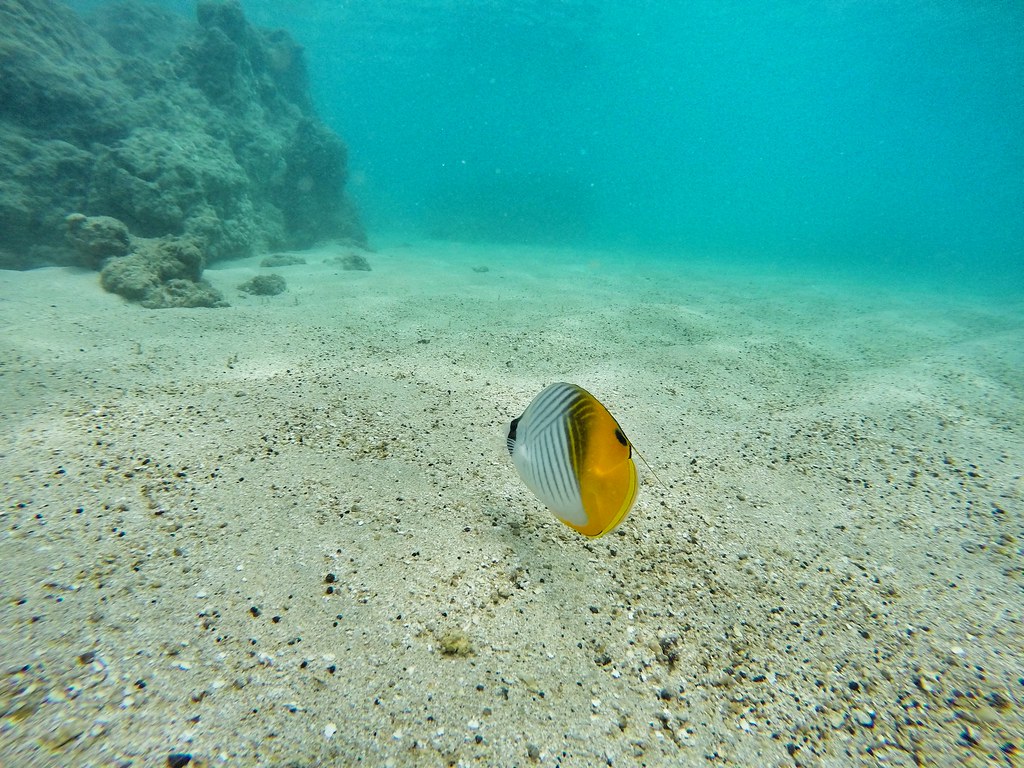 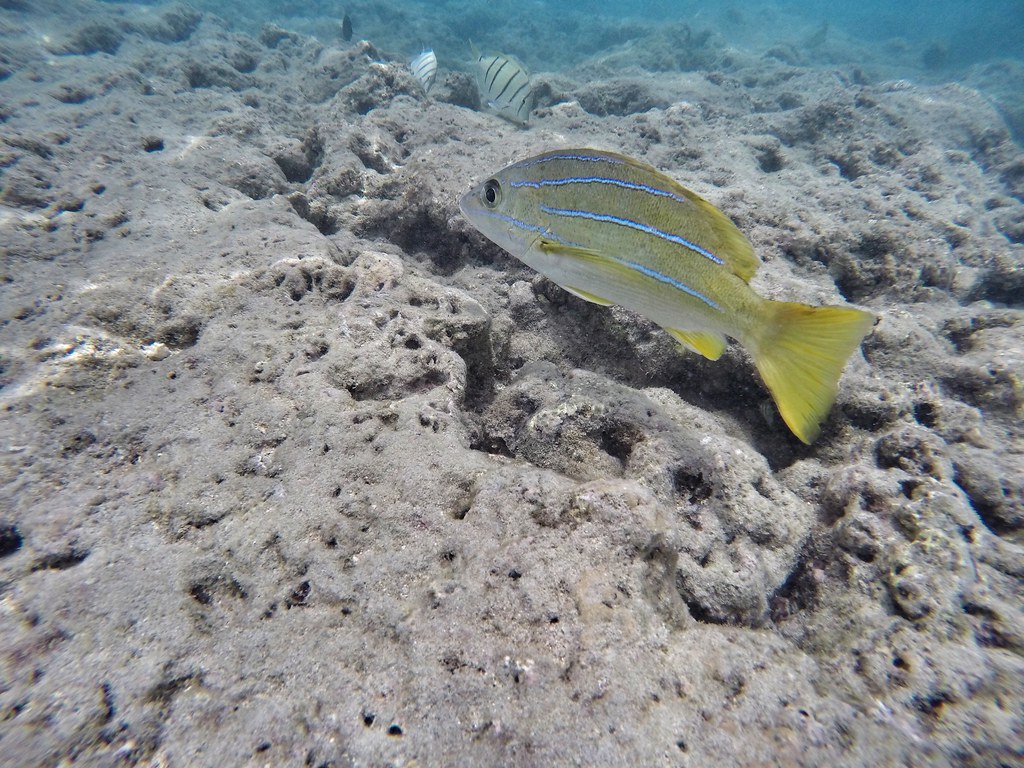 We missed our next bus by a mere 5 minutes (a very bad luck day for buses) so had our picnic early with a pretty bird that had a black body and a bright red head styled in a Mohawk. We arrived at Makapu’u beach and walked along the roadside above it. The beach was gorgeous with white sand and curved waves rolling across the turquoise sea. Even from way up on the roadside we could see right through the water to all the rocks in the deep areas, it was so pristine and clear. A hot walk up a concrete path took us to a prime whale watching spot and the Makapu’u lighthouse. There were no whales today but the lighthouse stood out with its red and white stripes against the azure ocean. 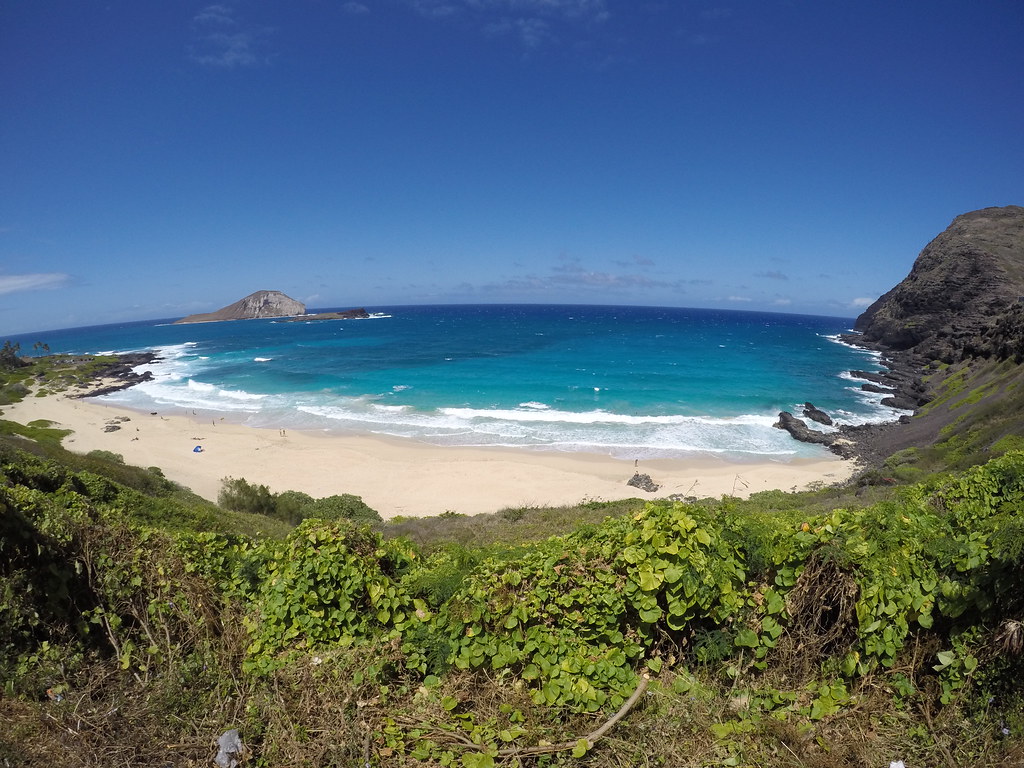 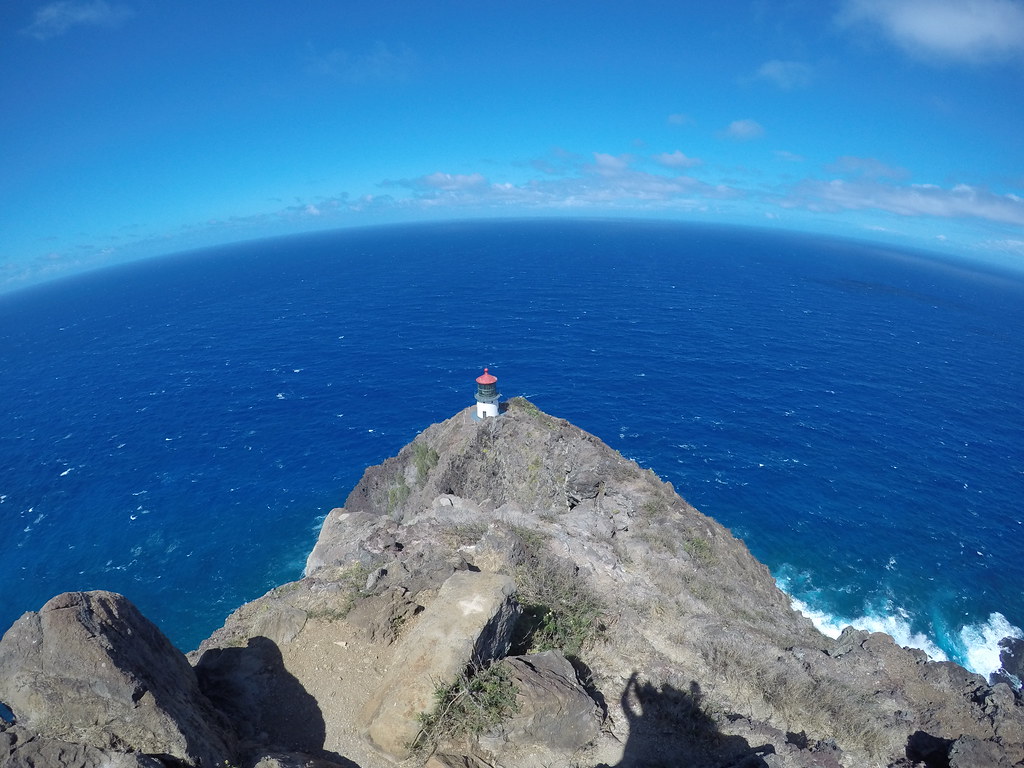 On our way back we detoured down a rough track to some rock pools I’d read about. They looked amazing from up high but were even more impressive once we reached the edge of the six or so crystal clear pools. To the side was dragons nostrils blowhole which literally sprayed two high plumes of water just like you’d imagine a dragon doing. I was surprised how appealing the pools looked, twinkling a beautiful blue colour in the sunshine. We got straight in, falling over rocks and stubbing our toes till we reached the biggest, deepest and most dangerous pool. Here the biggest waves rolling along the ocean would crash on the rocky ledge around us and formed a wall of water until gravity brought it down creating a mini tsunami. It was pretty damn awesome. Craig was being very stupid and standing on the rocky ledge waiting for a big wave to explode high above him. Well it did and he went from arms spread like a champion to a wet dog at sea gripping onto a rock on all fours as the wave tried to take him off his feet. 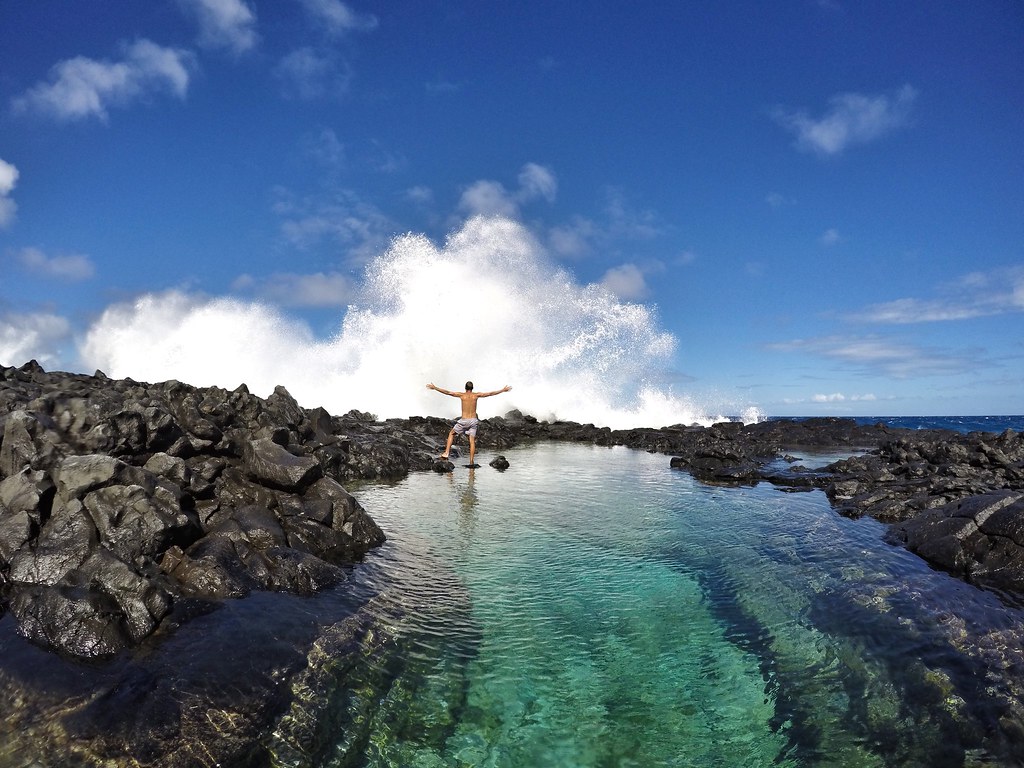 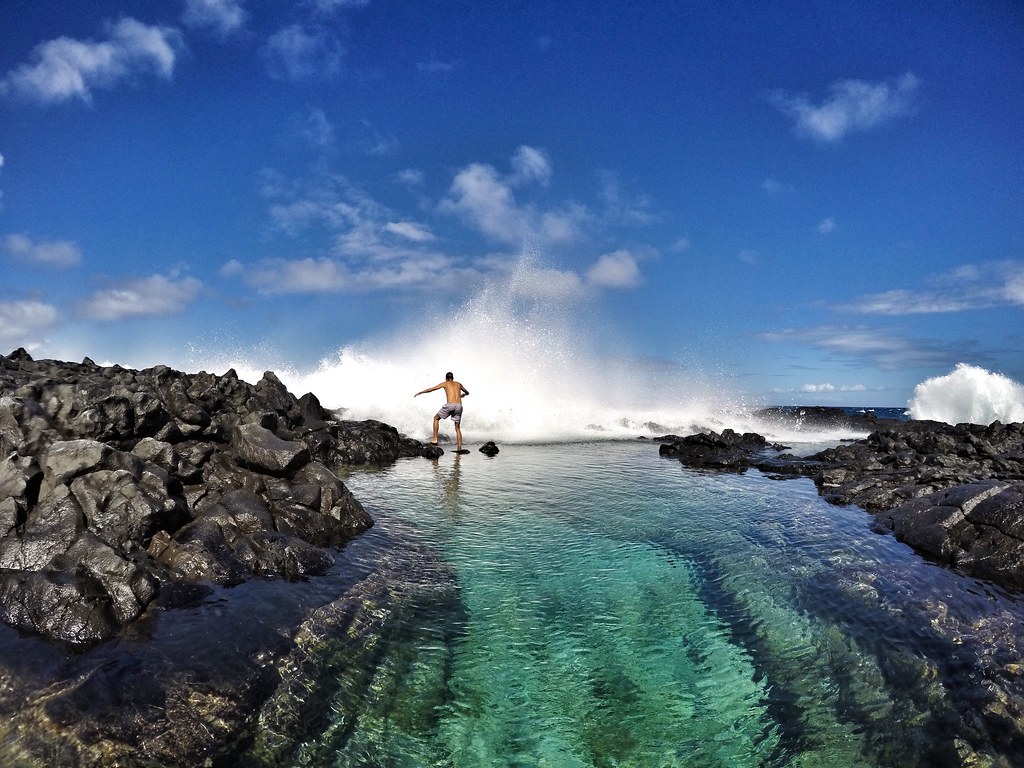 I relaxed in the sparkling pool lying on my back until Craig warned me a big wave was coming and I turned around to see a white wall and just braced myself. The water fell down and turned the clear waters into a bubbly champagne pool and I got swept along not sure where to put my legs out of fear of hitting a rock. 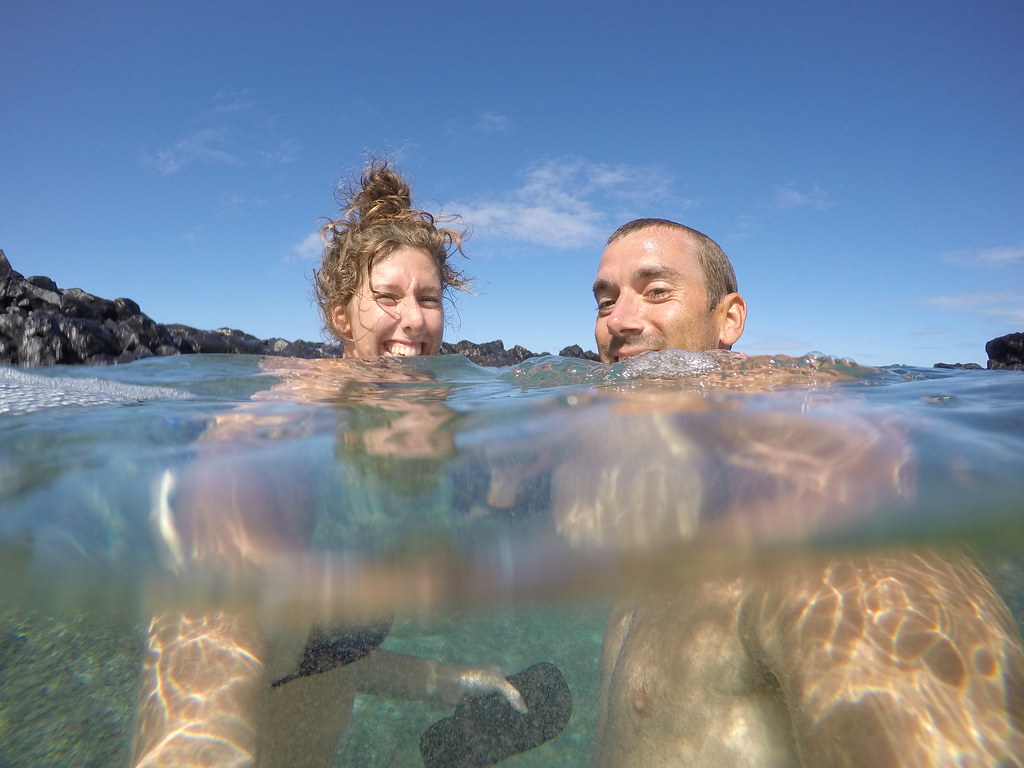 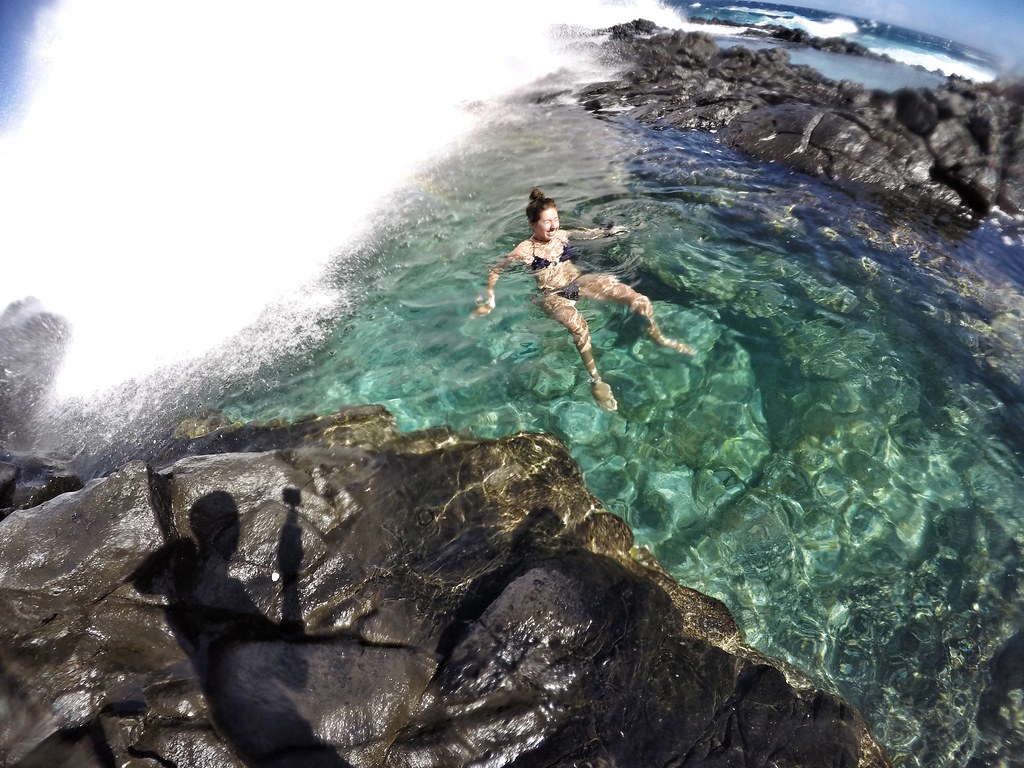 We spotted a couple in their own little world doing a ‘photo shoot’ by one of the pools. It was all very amateur with just an underwater camera but the girl was posing like she was going to appear on page 3 of The Sun newspaper. She had a see-through bikini or maybe it was just lingerie and she was dropping shapes like there was no tomorrow. Craig and I were giggling about how awkward it was and I started doing my own retarded versions which bemused Craig and I. The lady then strutted across the slippery rocks like it was a playboy catwalk and boom…she fell over. I shouldn’t laugh, it must’ve really hurt but Craig and I just looked at each other and knew we only had a split second to briskly swim away before our roars and snorts of laughter could be heard.