There’s something very special about swimming with dolphins in the wild; they decide if they swim with you, they’re not kept in a horrible glass tank and passed from one tourists to another or forced to perform tricks for food. In the wild they come and go as they please, they hunt their own food and they live amongst family and friends as nature intended. Take a hint Seaworld. I’ve seen photos of people swimming with them in Hawaii so I started researching and found that it’s basically illegal in Maui, and no tours are offered so that was a dead end. I suppose if we were very lucky while swimming in the sea a pod could approach us but there’s a slim chance and we wouldn’t know where to go. Oahu island however had a few company’s offering trips so we signed ourselves up straight away. It wasn’t cheap at $100 each considering there’s no guarantee, their wild after all, but we had to try.

We woke up at 4.30am to be at our pick up location by 5.15am. We were like zombies walking through the silent city and just slept in the back of the van till we arrived in Waianae harbour. We were given snorkel gear and ate a whole tub of cookies for breakfast as it was convenient and cheap, needless to say our diets have been shocking in Hawaii thanks to the extortionate cost of groceries.

There were about 14 people onboard the rib-style boat and we all sat along the inflatable edges. As soon as we left the harbour a big grey cloud swooped over and it began to drizzle. I managed to get the front seats of the boat which turned out to be a poor choice as I took the brunt of the wind and with the gale force wind the boat created at speed I was frozen. We plowed up the coastline searching for Spinner Dolphins, these are the acrobatic ones that leap, jump and true to their name, spin out of the water. They’re a very small and shy breed though and if bottle nose Dolphins are in the area then they’ll find somewhere else to play. We didn’t spot any Dolphins heading north and everyone was looking rather cold now so Captain Jenner decided to get us all soaked by taking us to a snorkel site. 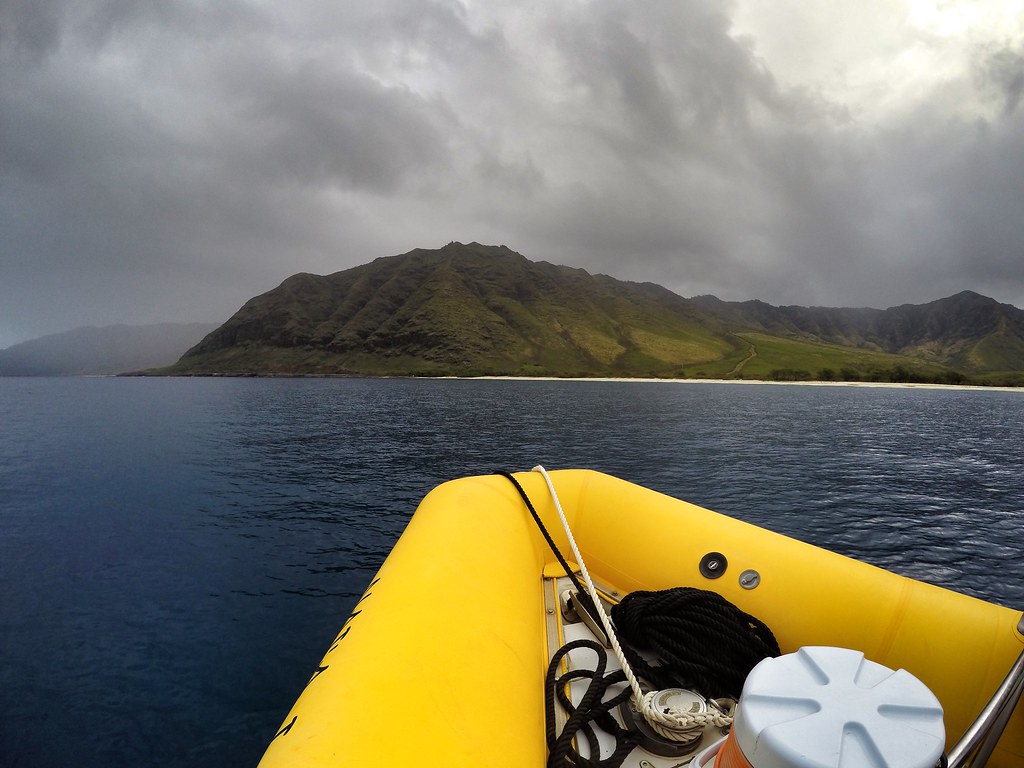 The visibility was awesome, such clear blue water, but it was a crap snorkelling location. The main reason they took us here was to see turtles who hang out under a rock ledge here…3 meters below us, so basically not really close enough to view and nothing else to see but clear sea. We felt even colder in the water and the lack of life made it quite unenjoyable. All we wanted to do was swim with dolphins but we were just floating like icebergs above an empty sea bed. 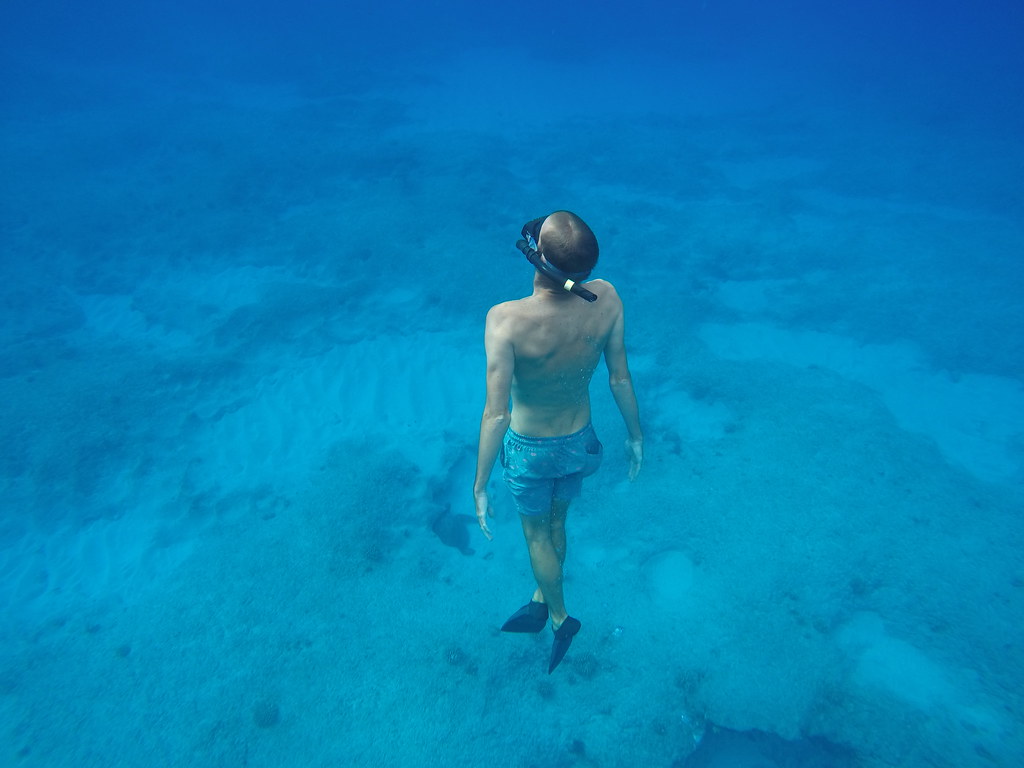 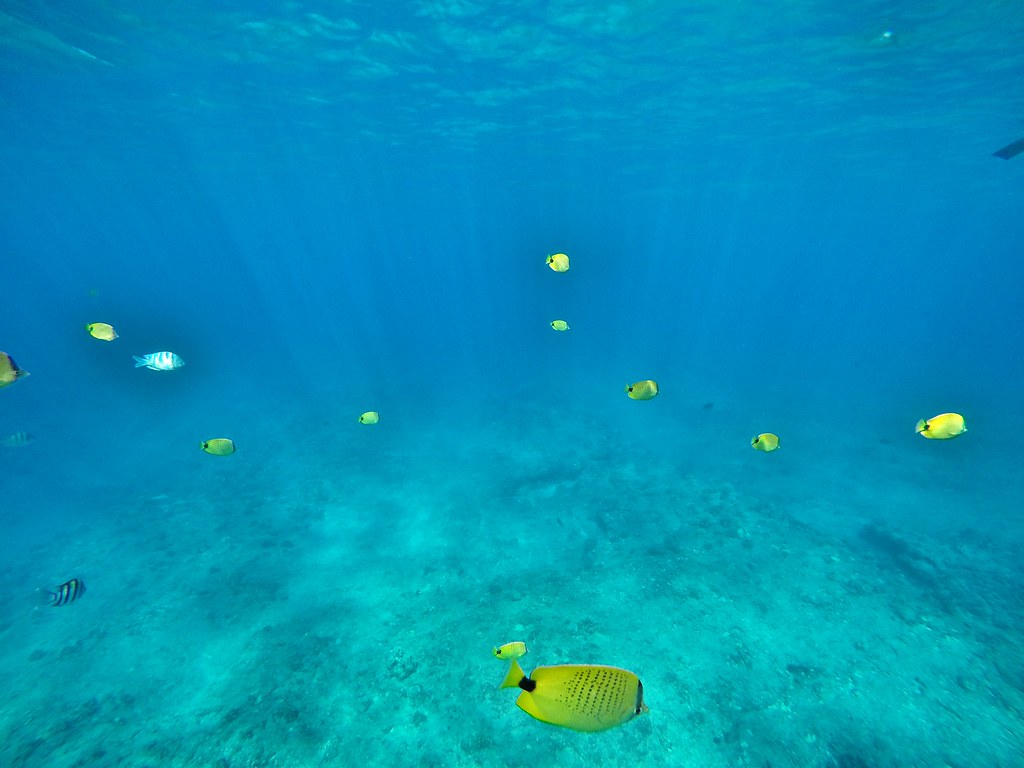 We climbed on-board and Jenner continued back down the coast but still no Dolphins so we were thrown back into the cold waters again, deja vu or what! This site was much better with lava arches but again not much life and certainly no coral around. There were three varieties of fish but they were just common types we’d seen before and only a few here and there. We kept swimming around searching for some life and eventually found a turtle who was just floating by the surface and looking a little sad and fed up. After a while he dived down and we found two other turtles together and we enjoyed swimming alongside them, one was a baby and it was so damn cute. We’ve never seen a baby turtle and she was less than a foot long and totally adorable. 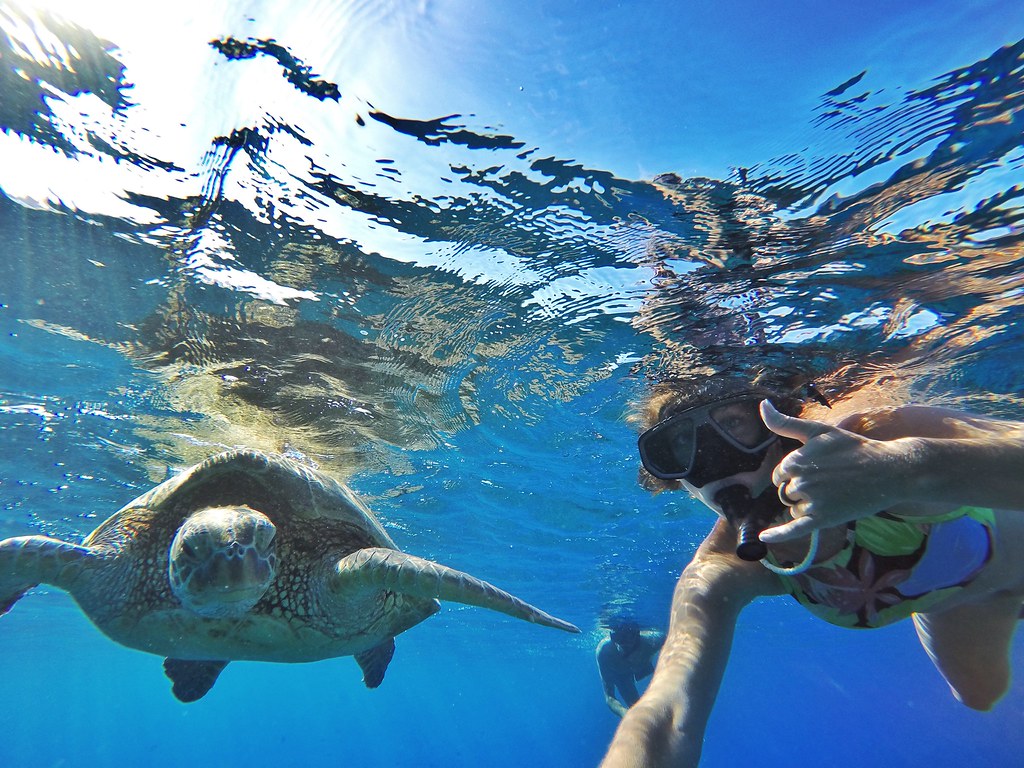 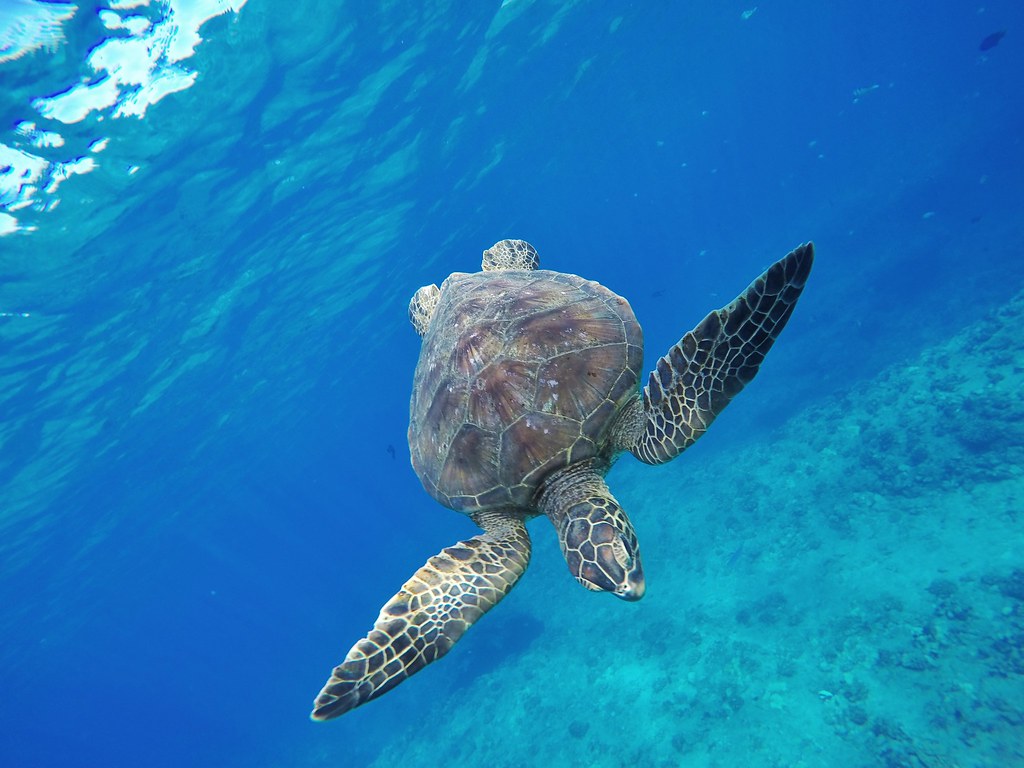 We had news come through the radio that a pod of spinner Dolphins had been spotted near the harbour where we began our trip. The sun was finally coming out and things were looking up. The boat sped off chilling us all to the core and we soon spotted lots of small black dorsal fins rising up and down in the distance. It was a pod of 30-40 Dolphins. They came more our way but another boat was closer and about 15 people jumped in and swam towards the Dolphins. They didn’t get very close but the captain thought they may come our way so back in the ice box we went, who’d of thought Hawaii would have such cold sea? I looked down through my goggles and the visibility was appalling. We’d be lucky to see the Dolphins if they swam right in front of us – which they didn’t of course. Or did they?? After waiting a while and everyone shivering like mad we got back on board to try further up the shore. 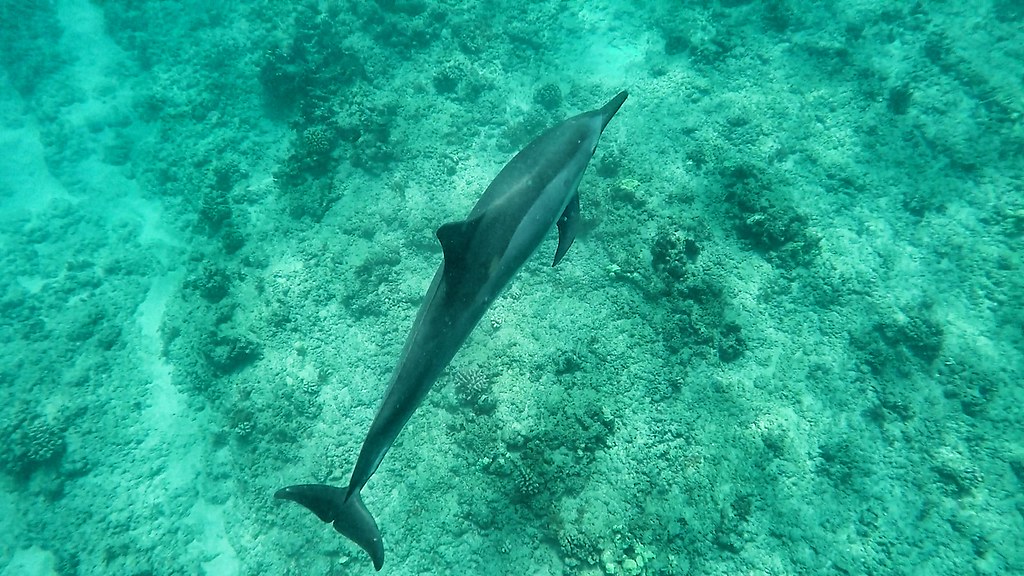 Again, we slumped into the sea like slippery seals and bobbed around. Our group was told to stick close together, stay silent, don’t kick or splash and calmly swim alongside the Dolphins, never chase them. This time they did come our way and a small group of 5 or so swam a few meters away from us. Sadly the water was still not so clear thanks to us being in the harbour area so we didn’t get a crisp view from their distance. I looked down however and saw one about a meter below me waving it’s shiny body up and down and gliding effortlessly through the water. Success! But…it still wasn’t what I envisioned my swimming with dolphins experience to be and luckily neither did the captain so she got us back on board and waited a while to help the Dolphins relax more around us. 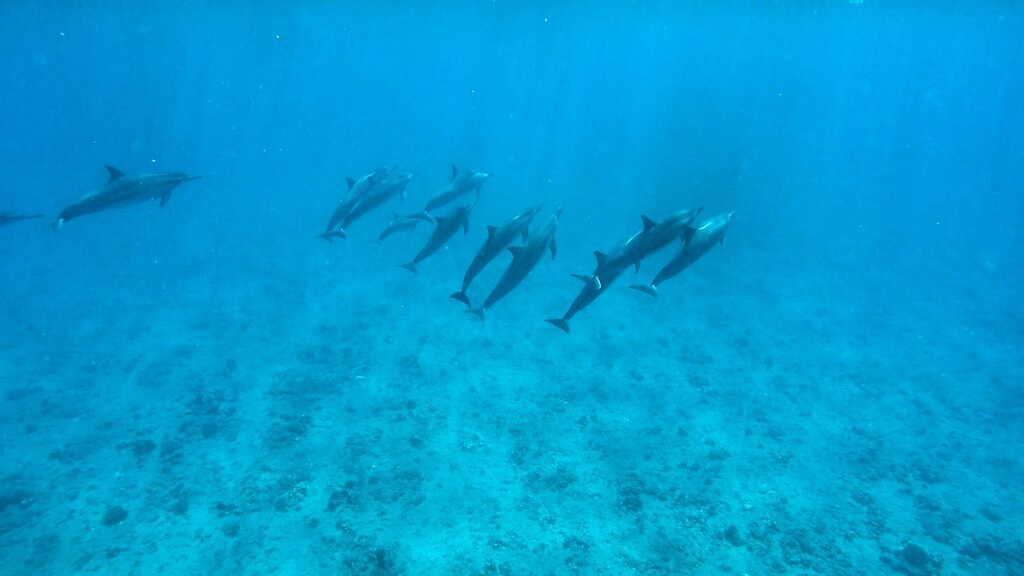 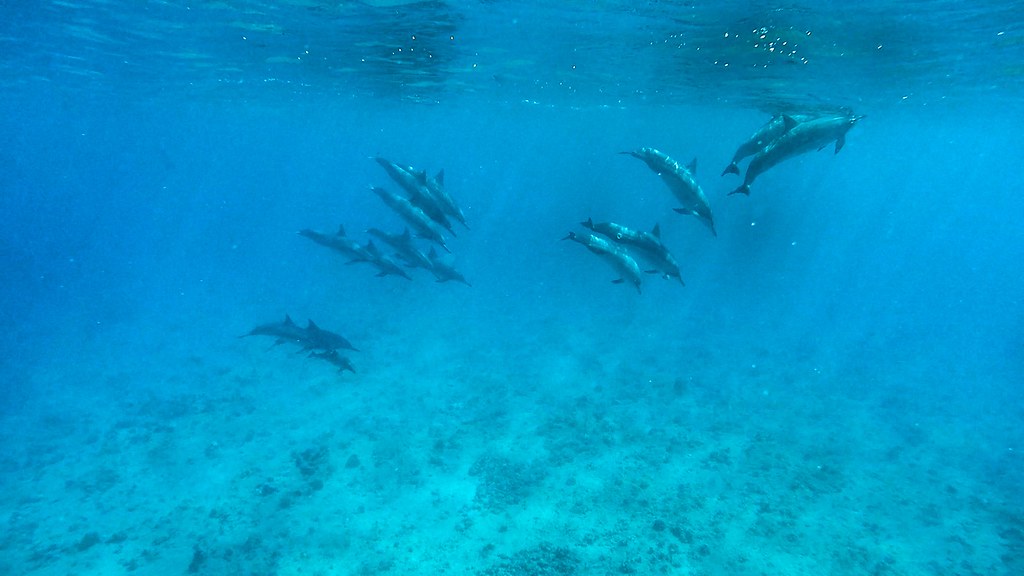 The tour was almost over so this was our last chance. We cruised alongside the Dolphins who got pretty close to our boat this time and we were treated to a few of them jumping out the water and spinning in the air! The captain positioned us ahead of the pod, this area had clearer water and we waited patiently till suddenly they started coming our way. The pod consisted of lots of small groups like families, friends and couples, that’s not a scientific fact, it’s just how the whole scene looked to me. They continued coming right towards us and they headed around and between us humans. It was insane! Distant grey figures would gradually come into focus and their details and neat patterned skin would be as clear as day as they swam beside us. I was totally overwhelmed by the whole experience. We could hear them squeaking and talking to one another. They swam in such a synchronised manner together and there were even tiny babies amongst the pod who propelled themselves out the water. It was a magical experience and everyone had huge grins and frost bitten fingers afterwards.