The Hana highway is only 52 miles long yet it has over 600 twists and turns and 50 or so one-lane bridges, it takes about two and a half hours of constant driving to reach Hana. We set off early in our modest rental car and followed convertible mustangs along the winding road. The highway is best known for its abundant waterfalls which plummet down cliffs and into clear pools. 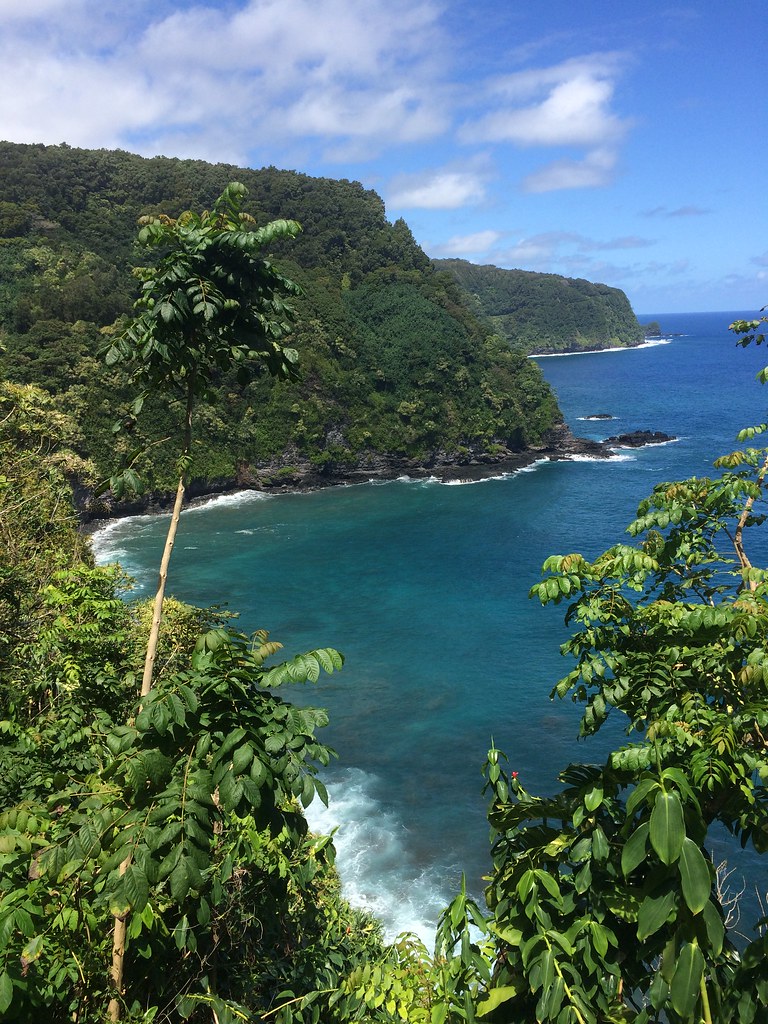 The road wound through dense jungle and tropical foliage. Giant leaves hung on branches over the road and flowers climbed up trees. To be honest there weren’t as many sea views as I expected and most of the road was set back from the coast in the rainforest. We drove through gaps in valleys and past thousands of young bamboo groves. There were even rainbow eucalyptus trees along the road which were literally like rainbows with multicoloured bark. 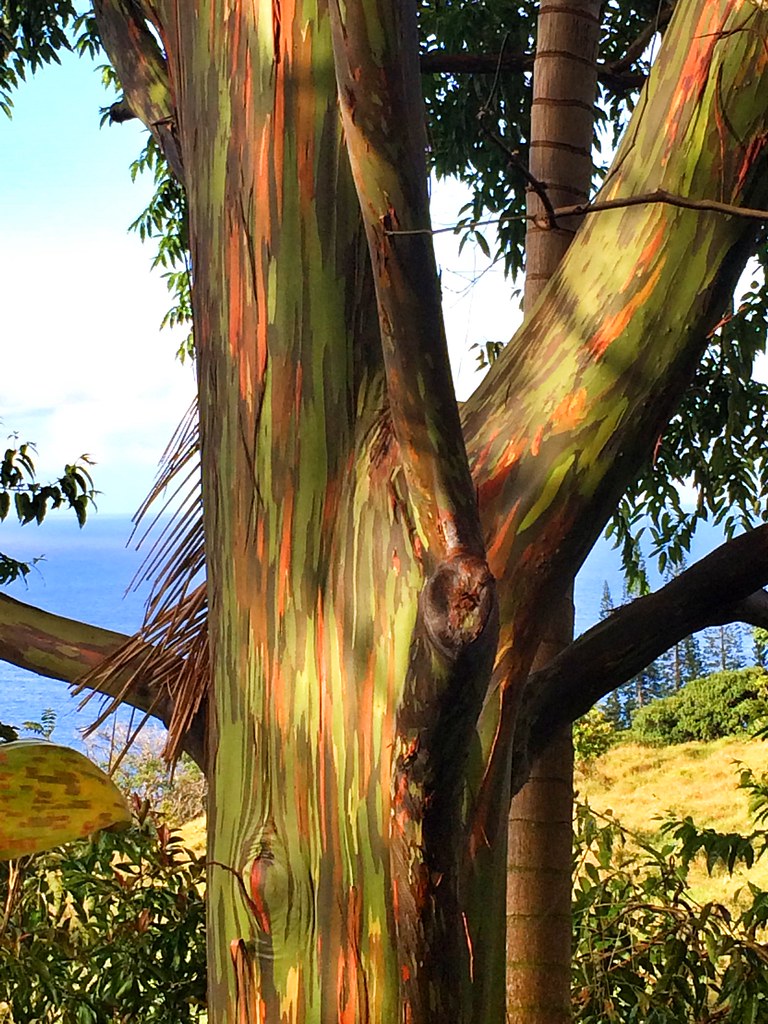 Fruit stands were dotted along the highway selling fresh organic produce and homemade banana bread. We decided to go all the way along the road (for three solid hours!!) past Hana and along a very narrow windy road to the Haleakala National park. The Pipiwai trail began here and was something I really wanted to do so we set off way behind schedule into the shaded forest. We were soon greeted with our first viewpoint of a waterfall through a valley and continued on to a giant banyan tree which Craig enjoyed clambering up on the many tangled branches. 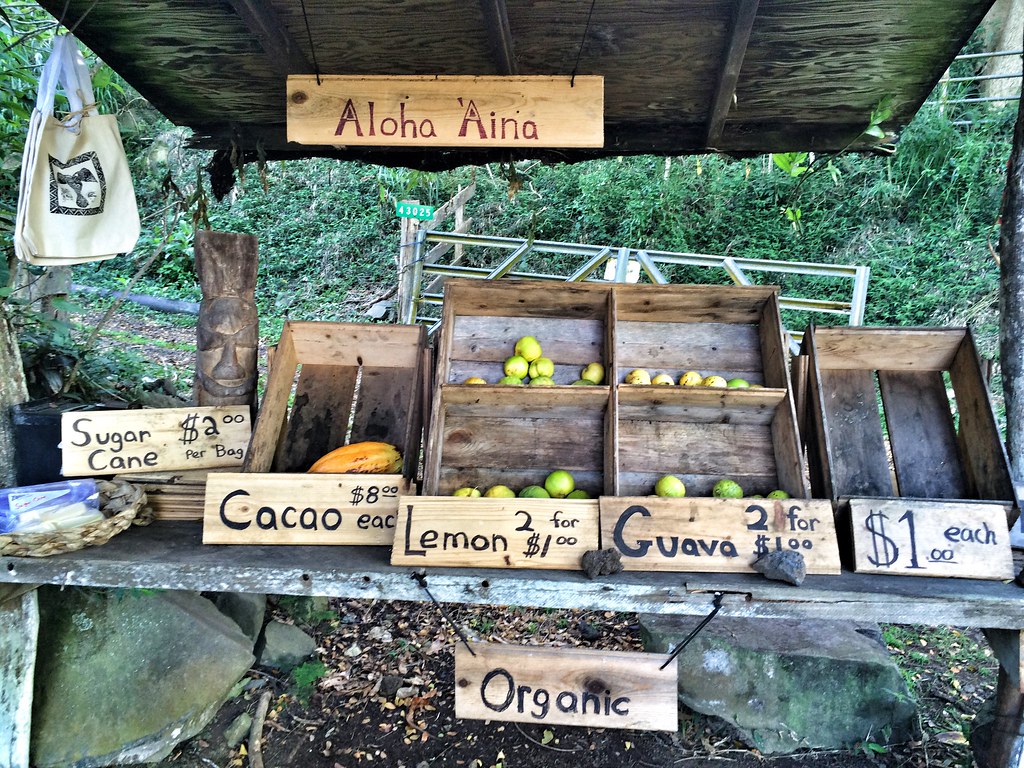 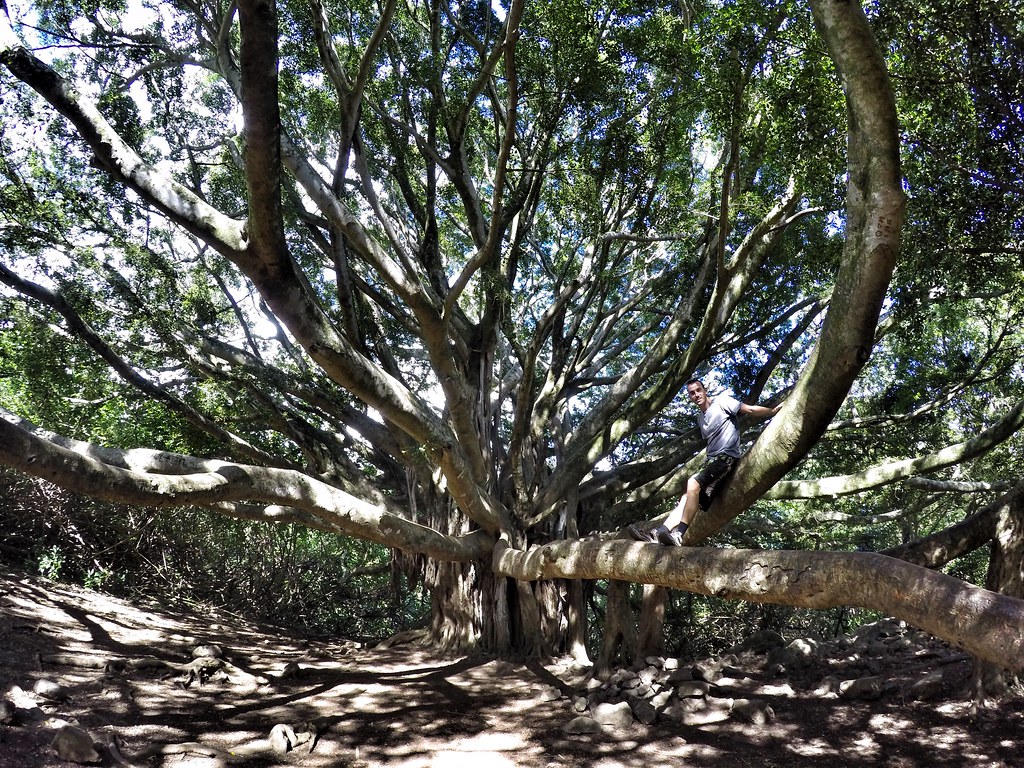 The vast majority of the hike was through a bamboo forest. It was a total contrast to the one we’d visited in Japan which was packed with tourists. In Hawaii it was tranquil and void of people. It was in a natural setting with no fences or concrete paths and it had grown so densely that the shoots had collapsed and they all swayed, banged and cracked in the wind. 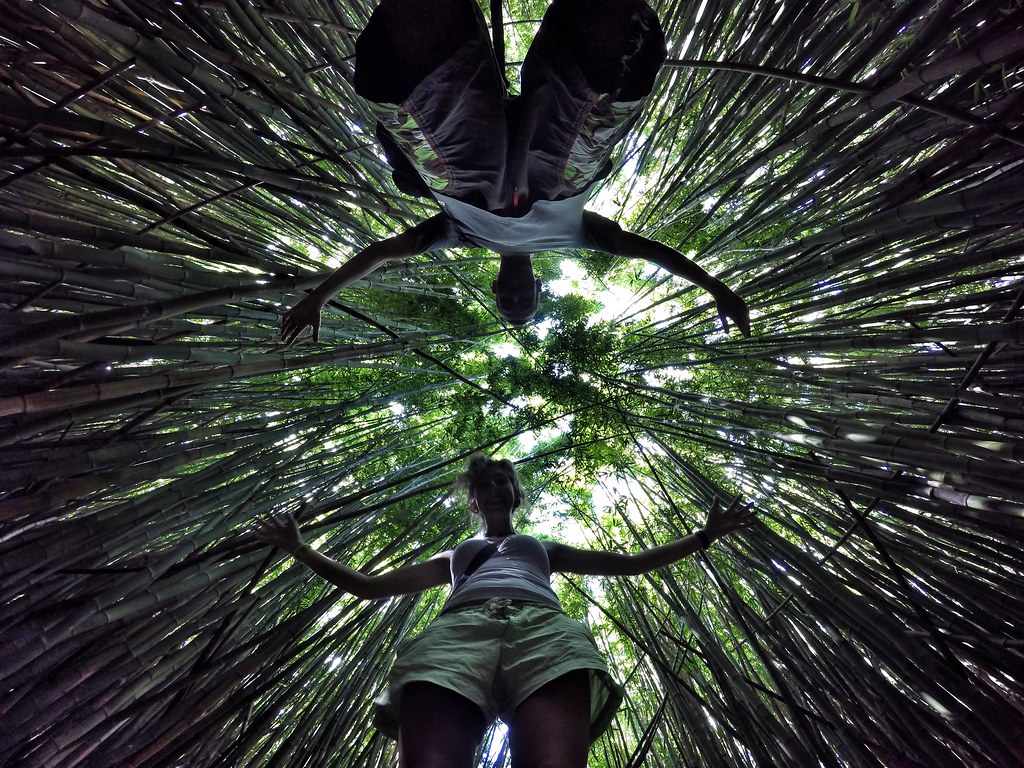 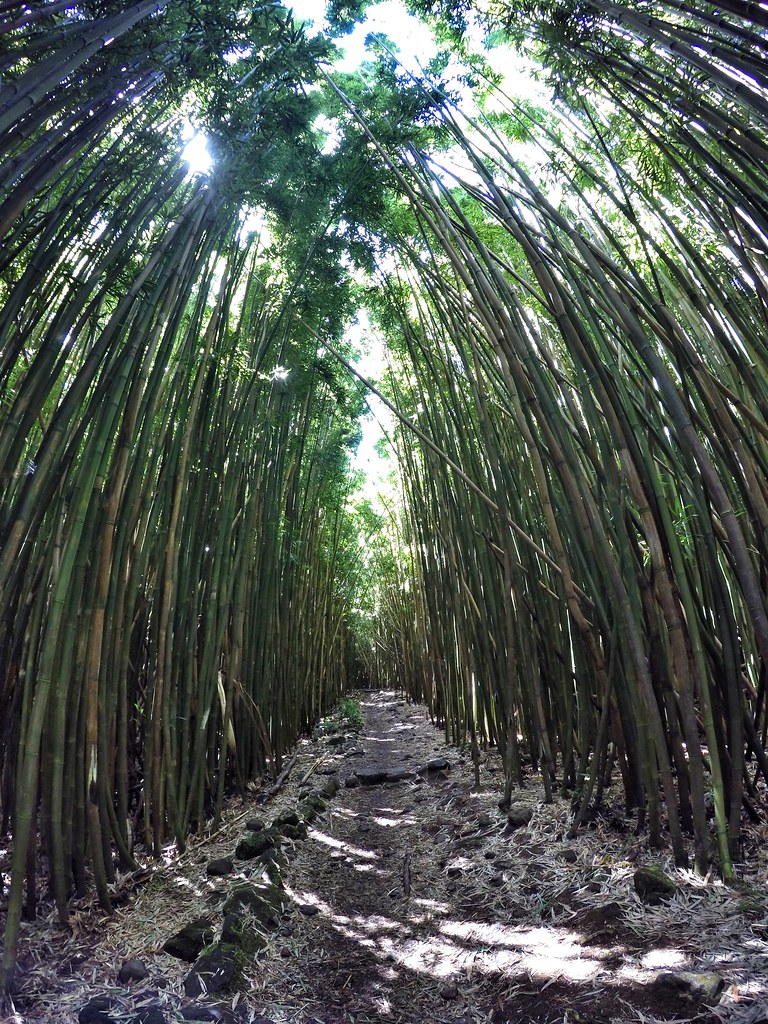 The end of the hike was at Waimoku falls which dropped 400 mighty feet down a cliff edge. It could of done with more water but was still a sight to behold. We followed the same route back and stopped at one of the many natural pools we’d spotted on the way up for a swim. I was balancing on a slippery rock waiting for Craig to say he was ready to take a photo and right as I was about to jump I heard “wait! I need to focus” and I ended up doing a midway belly flop into the very cool waters. 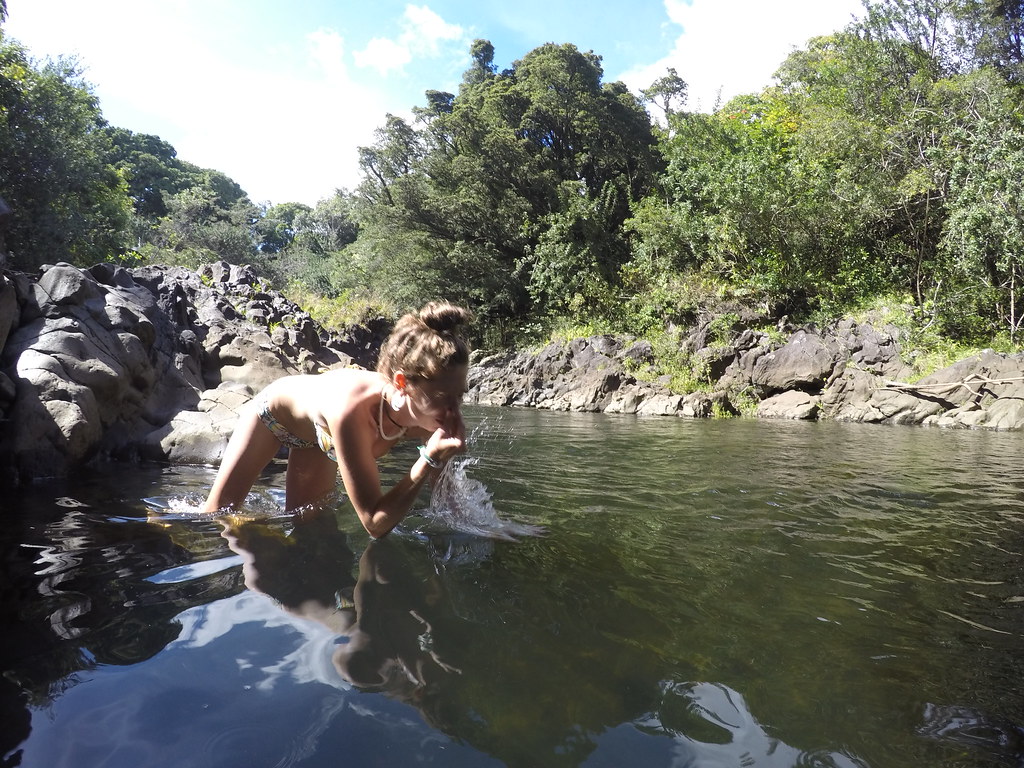 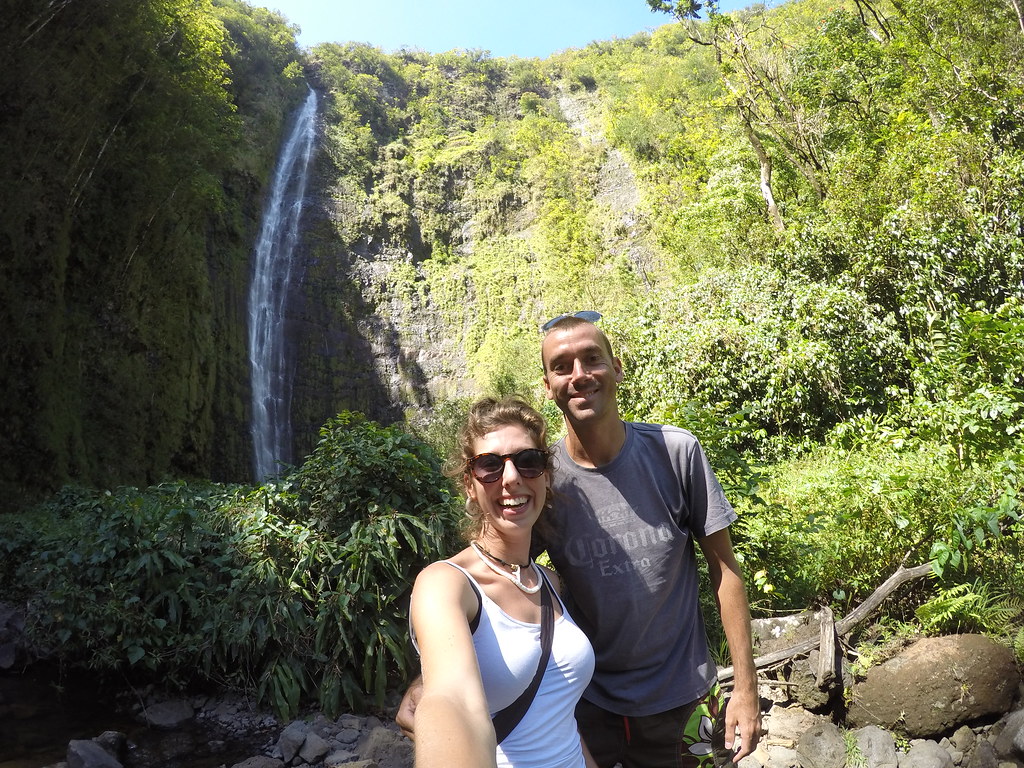 At the end of the hike a separate trail began to Oheo Gulch, otherwise known as the seven sacred pools where waterfalls drop into large swimming holes and eventually the river flows into the wild, blue ocean. We wondered around the beautiful coast admiring the vibrant green plants against the blue background. 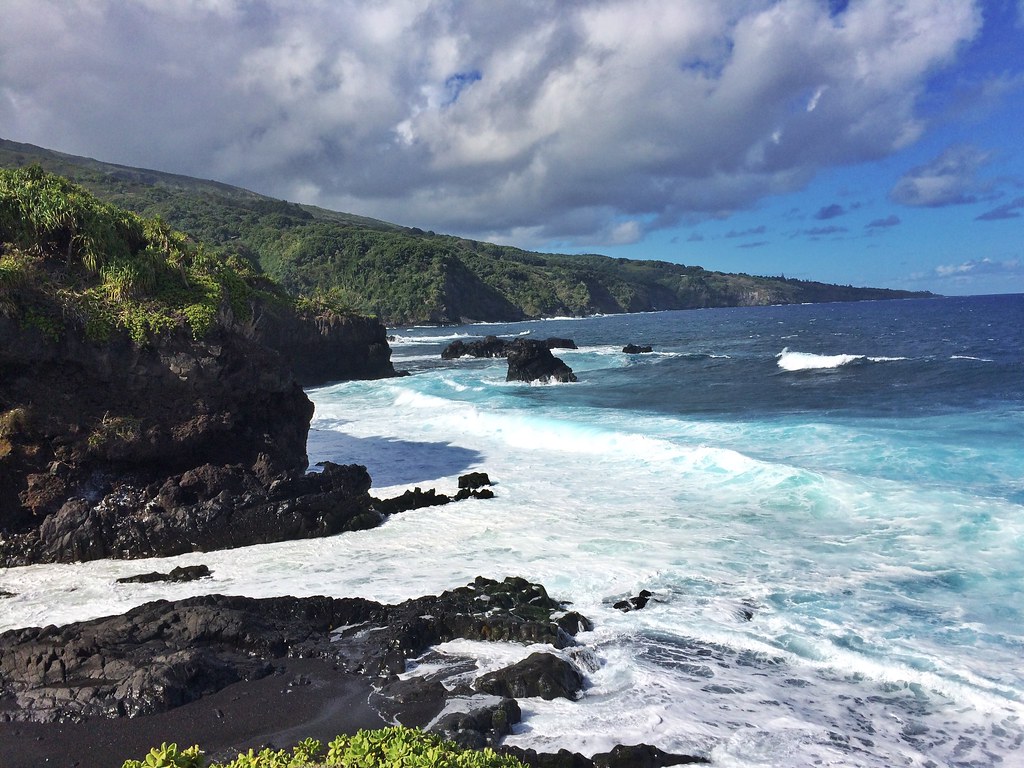 The route back was horrible, we’d ran out of time to see anything else along the road so we just headed back. We were driving on the opposite side of the road which offered much better coastal views but much worse visibility of other cars around bends. Crazy mustang drivers cut across our side of the road and it was a constant battle of slamming the brakes down. It was absolutely exhausting and I wasn’t even the driver. On the plus side we were treated to a rainbow on the drive home. 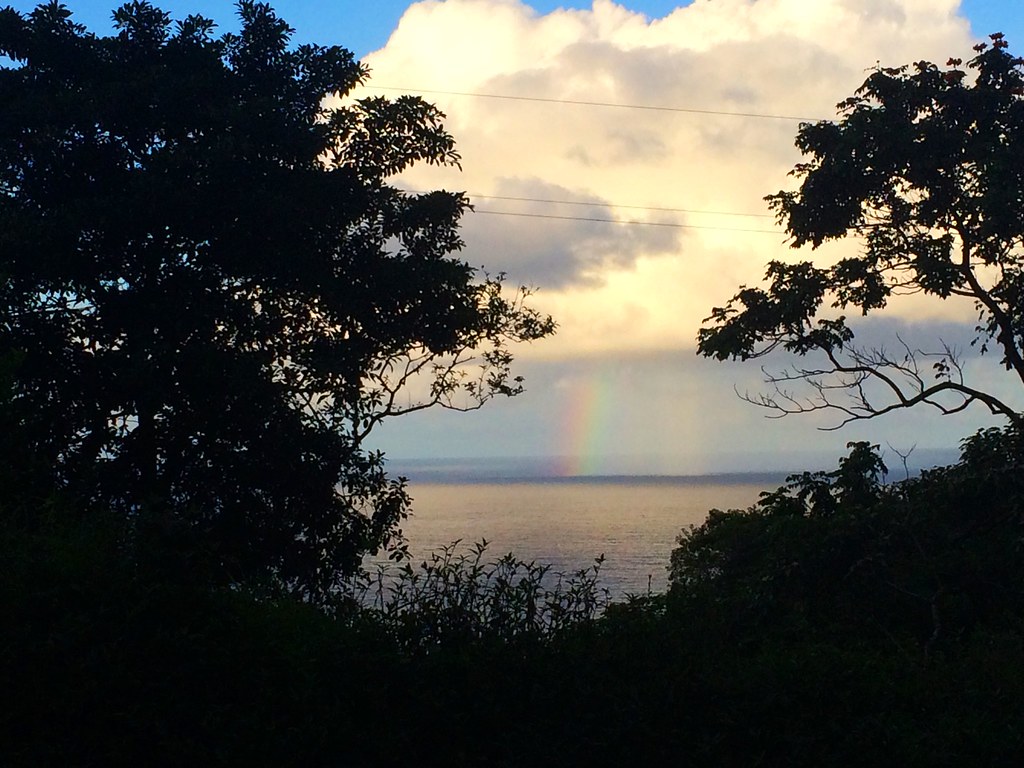