I love days full of variety; we didn’t really know what we were doing with our day but it all worked out rather well from swimming with turtles and watching a blowhole and the sun create constant rainbows to wandering around old towns and beautiful road trips.

We began in the warm morning sunshine at Makena Landing with our snorkel gear on and my rubber tube at the ready. Once we swam past the wavy beach the visibility cleared up and the visibility was great. The sand beneath us was rippled and patterned and it didn’t take long to spot our first turtle who was quite a big chap and had a huge barnacle stuck to his face. We swam alongside him towards the rocky shoreline with patches of coral…the reef was extremely disappointing though, there were no vibrant colours, just the same yellow tones and lots of red urchins. It was still nice see the turtles but there were very few fish or colour. We overheard some Americans saying how amazing the reef was and how many fish there were and we felt like we’d missed something so we decided to try the opposite side of the headland as there were snorkelling boats moored up nearby so it was clearly a good area, but it was the same story, maybe we’ve seen too many good reefs and variety of fish in other places around the world to appreciate it. 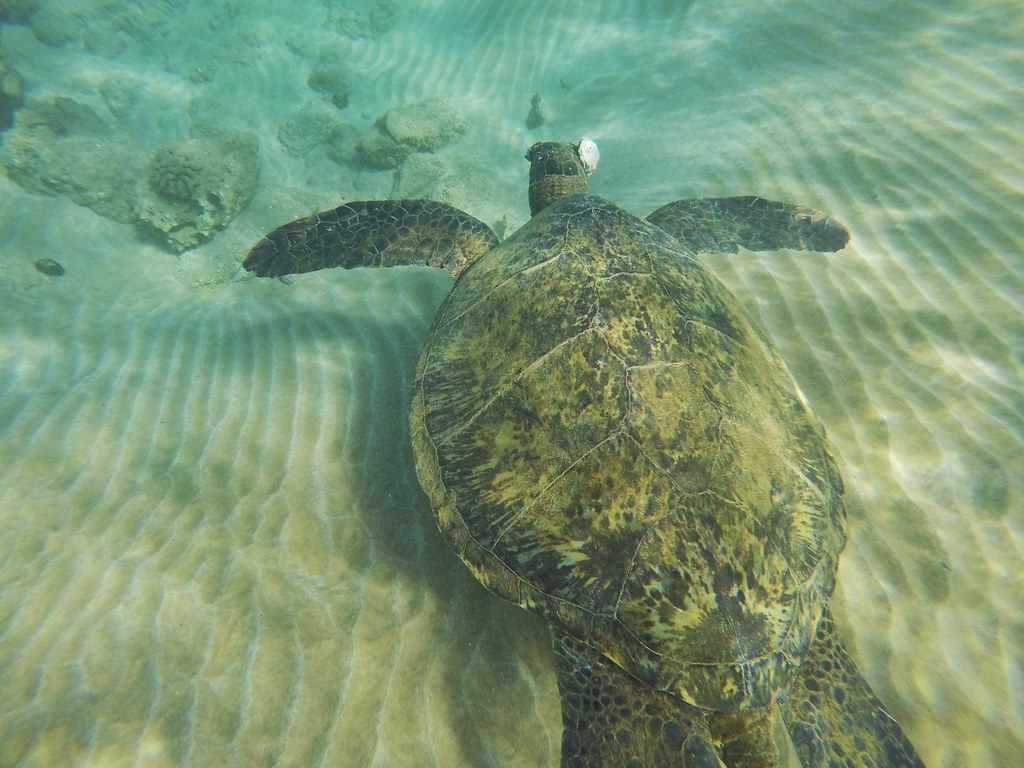 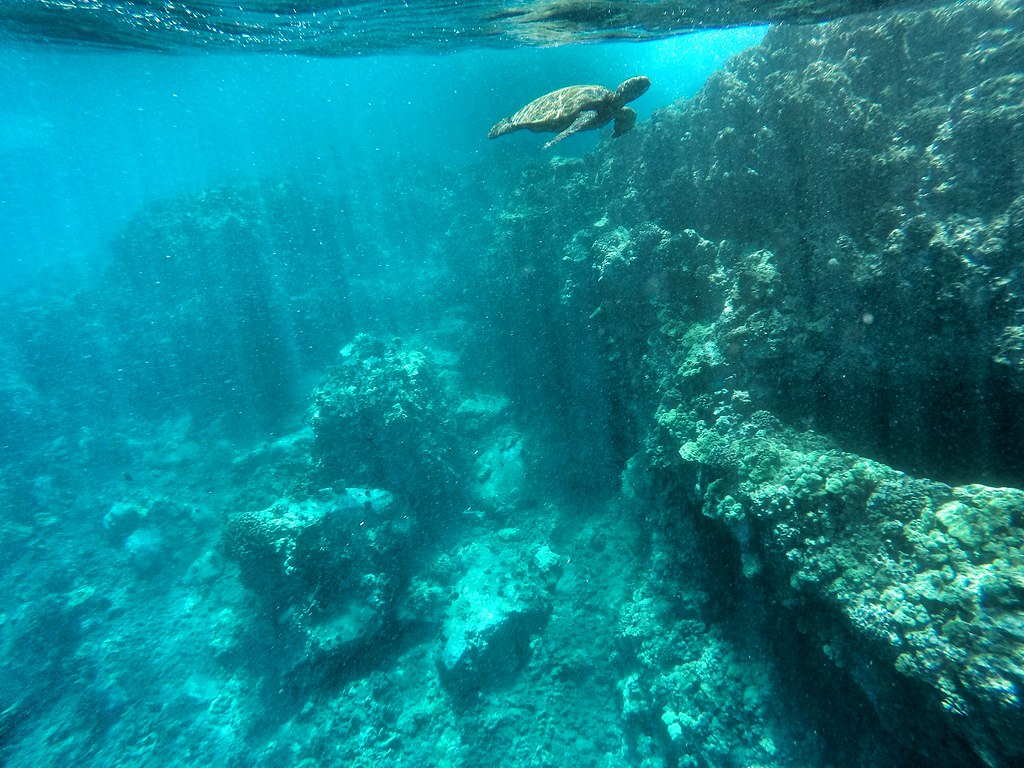 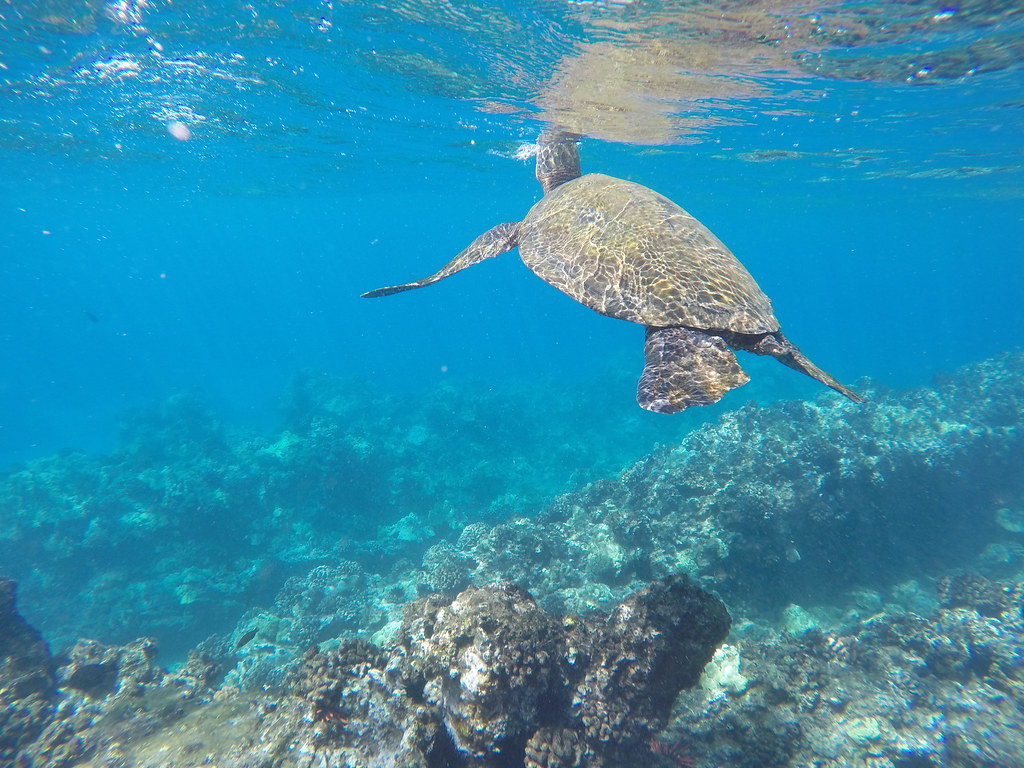 Afterwards we headed on the beautiful coast road around to the north western tip of the island to an unmarked sight, the Nakelele Blowhole. All we knew was it was near mile marker 39, but luckily there were lots of cars already parked up and a short walk downhill led to an awesome blowhole. It was unlike any other blowhole we’ve seen before; instead of a pool where waves came through a gap and all the water sloshed wildly up, this one shot through a tiny hole in the rocky ground and it projected up like a Volcanic Geyser would. When a big wave rolled across the ocean we’d know the blowhole would reach sky high and soak everyone in water. 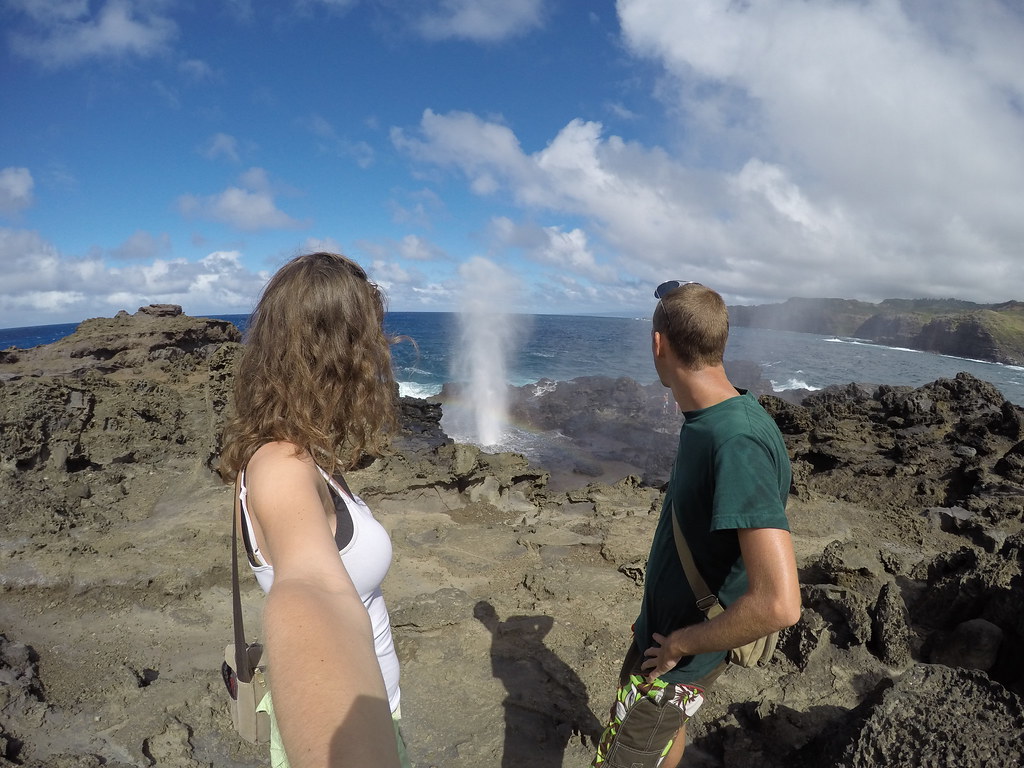 Across from the blowhole was another little attraction I’d wanted to see; the natural heart in a rock. From a certain angle this hole looked just like a heart and it looked even better when a big wave crashed and sprayed the area with white wash. 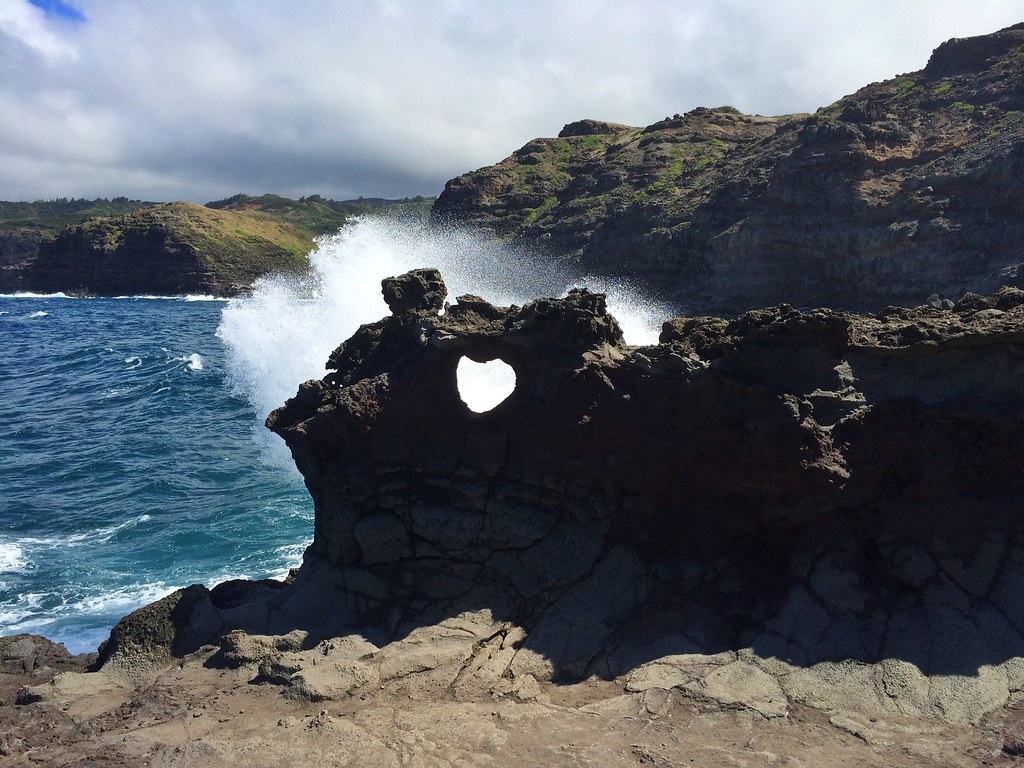 I was ready to leave but Craig said he wanted to see the other side of the blowhole so I followed him along a slippery surface where the sea spray had been landing and we had to rush over before the next wave came. It was 100% worth it though as from this angle the sun shone in a way which created magical rainbows across the spray of the blowhole. It was so amazing and I couldn’t wipe the grin off my face. They were the most vibrant rainbows full of fluorescent colours and were either full semi-circles or would start one end and move through the mist towards us. 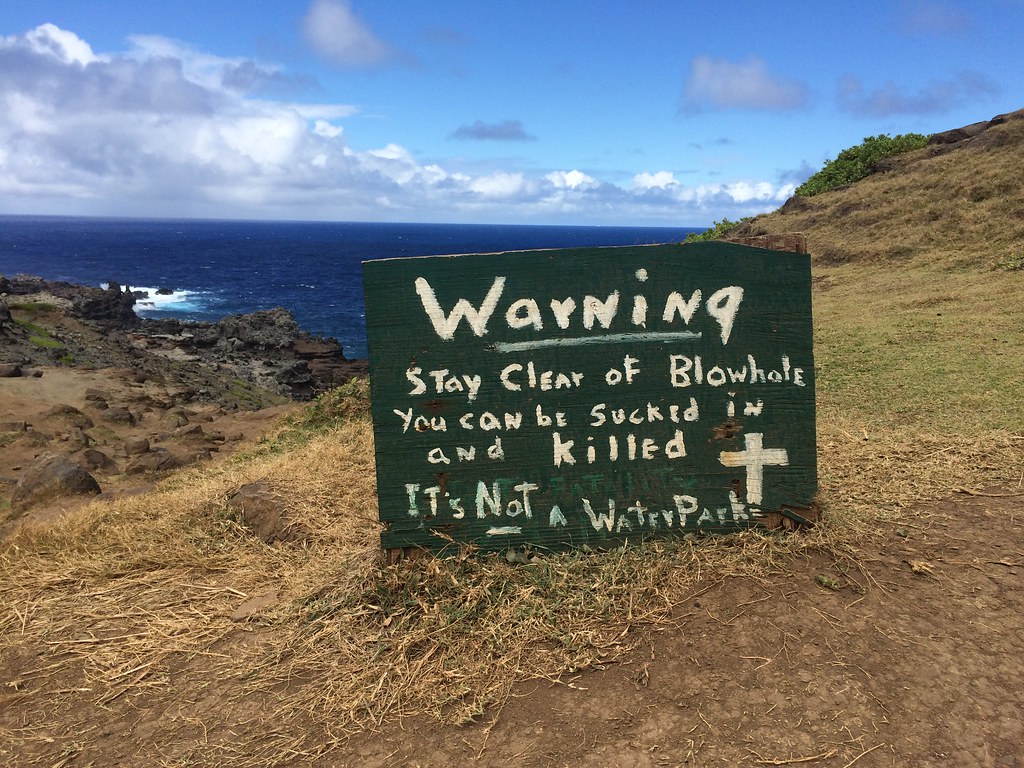 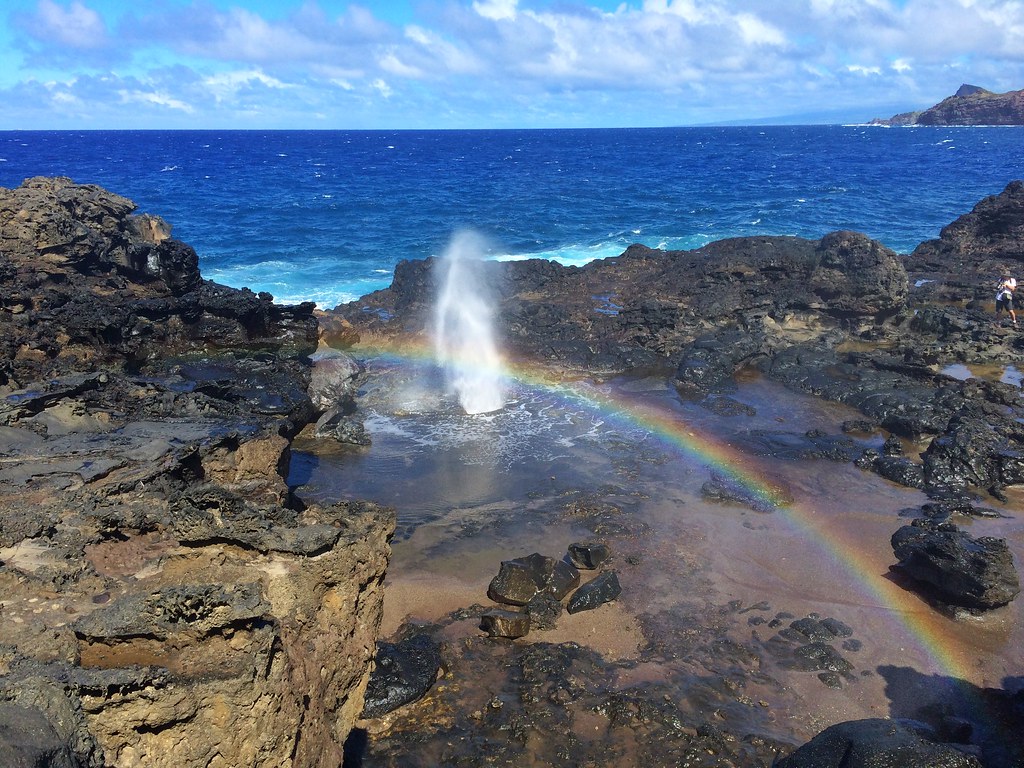 The route back was very scenic with red rock cliff walls dropping into the blue ocean. We stopped at Lahaina for a wander around the old town. It had a very wild west feel with cute boxy buildings in bright colours. Driving along the coast as the sun was setting I spotted a huge splash in the sea and squealed with excitement “WHALE!! It’s a WHALE Craig!!” So he quickly pulled over and there were two humpbacks flying out the water and crashing back down! It was incredible, even though they were far away we could still clearly see their fins slapping and big body’s flying out. 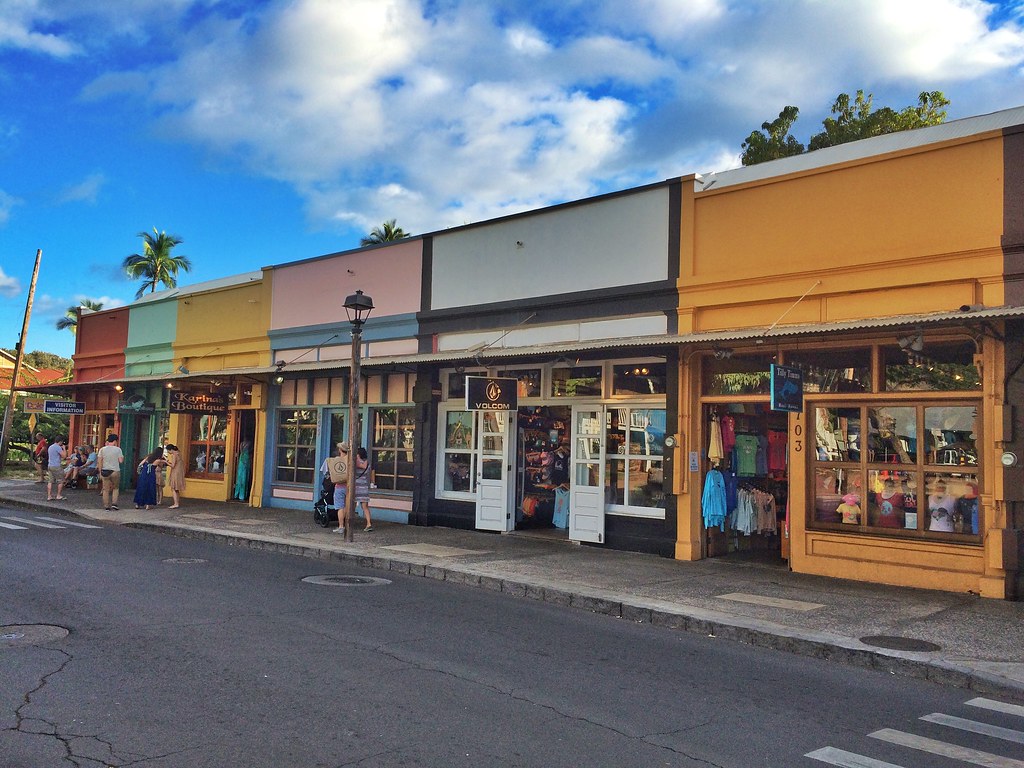 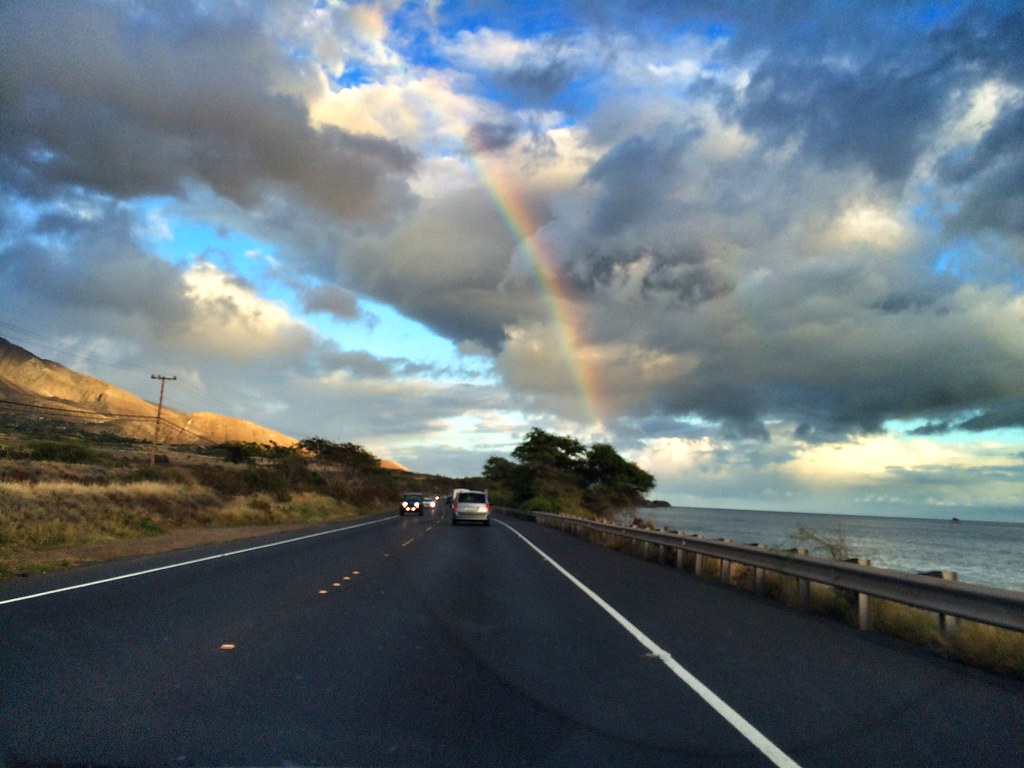