If we came all the way to Japan and didn’t see a Sumo Wrestler we would be very disappointed. The day didn’t begin well as we were behind schedule for the sumo practice at Arashio Beyo. Then we stupidly bought the wrong metro pass and had to walk large distances to save buying another ticket. Not only that but we were travelling at rush hour and I’ve never seen anything quite like it. I actually read men are employed to push people onto the full trains in Tokyo, we didn’t see that but instead the passengers were taking it upon themselves to do it, including 70 year old men. I put my arm up to film all the drama on my GoPro and couldn’t put my arm back down afterwards, it was that full, no one even held on as we were all wedged in so tightly and we just swayed when the train took off or braked. We were in hysterics, such a civilised country yet look at this mayhem!

Once at the right station we couldn’t find the sumo place and were bickering with each other. A local man kindly helped us find the place by calling them up and walking us along the road. It was a bit awkward as other people we passed were pointing us the way but we couldn’t neglect our friendly escort. Thankfully we turned up a road and saw about 20 tourists peering through a window. 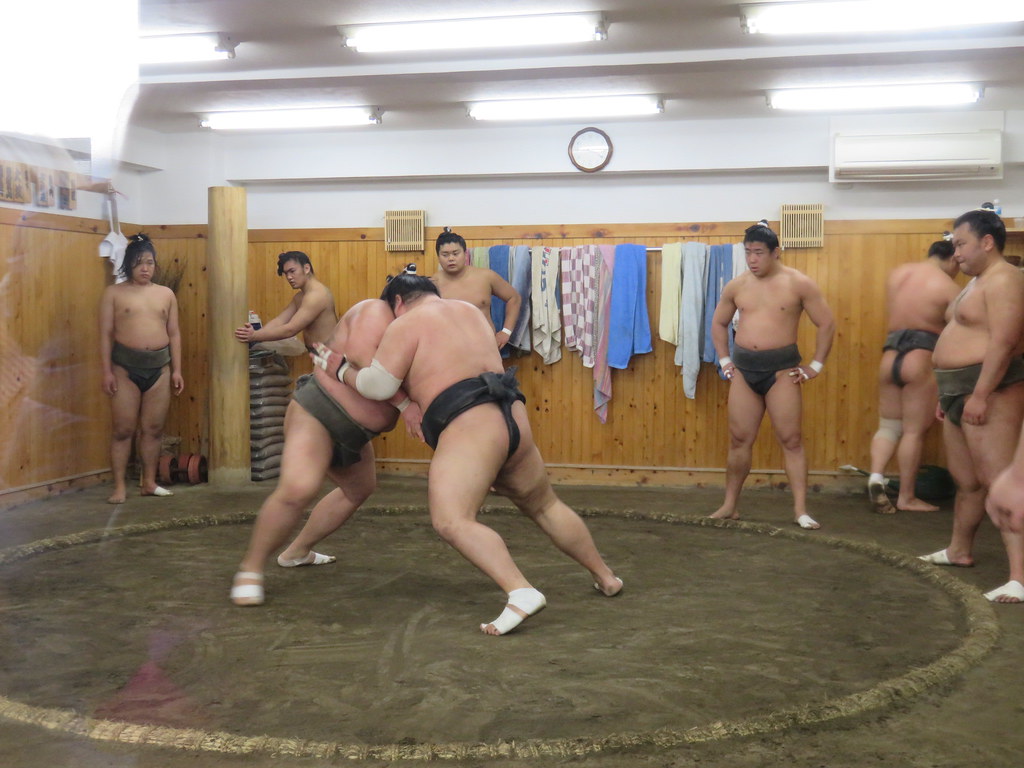 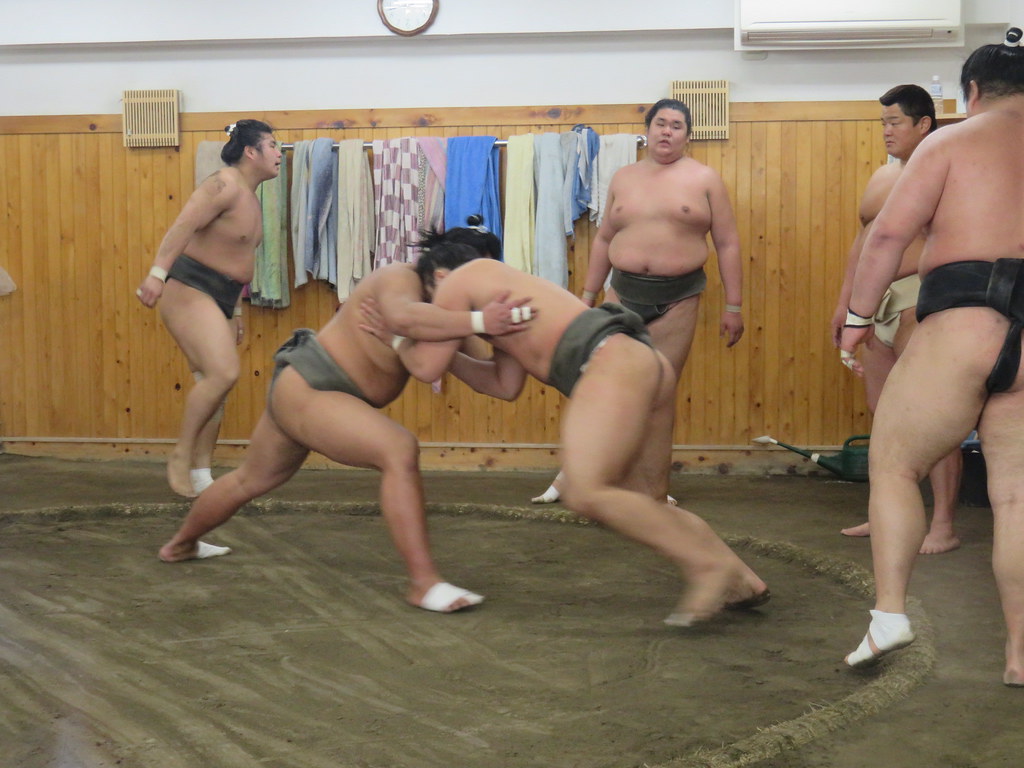 Because there were no tournaments happening when we visited this was our best bet at witnessing Sumo’s in action. We couldn’t enter the building, but instead quietly observed through some large windows. There were about 20 Sumo wrestlers in the building with two fighting in the centre. The aim seemed to be to push the other player out of the muddy circle, and the winner stayed on. The Sumos weren’t as fat as I imagined, maybe these weren’t the pro’s and were just beginning their careers, but there were a few very chunky chaps with boobs bigger than the average females. Most of them were big overall though; tall and stocky or short, fat lumps.

The trainer was actually a really thin man which seemed odd. They all had black hair glistening with sweat and tied up in a bun and they were wearing the traditional thong-like pants. They had no shame bending down in front of the crowd. Apparently if their pants fall off during a competition they are instantly disqualified, and highly embarrassed i’d imagine.

They did some training exercises at the end of the session; lots of leg lifting and charging into one another. I don’t understand how a person can exercise everyday and be so fat. When it was over they bowed to their trainer and to our surprise headed straight out the door towards us. It looked like they were trying to shoo the crowd away but they said the word ‘photo’ and they were offering anyone to take a photo with them. This made me so happy! They gladly posed with us and made us feel very small in comparison. One lucky toddler even got picked up by one of the men and a day care ‘train’ came along the road with about 4 kids in each Victorian style pram and the Sumo’s all showed their soft side and waved. Once we’d finished taking copious photos of them they covered their sweaty bodies in a robe, hopped on a bike and rode off. 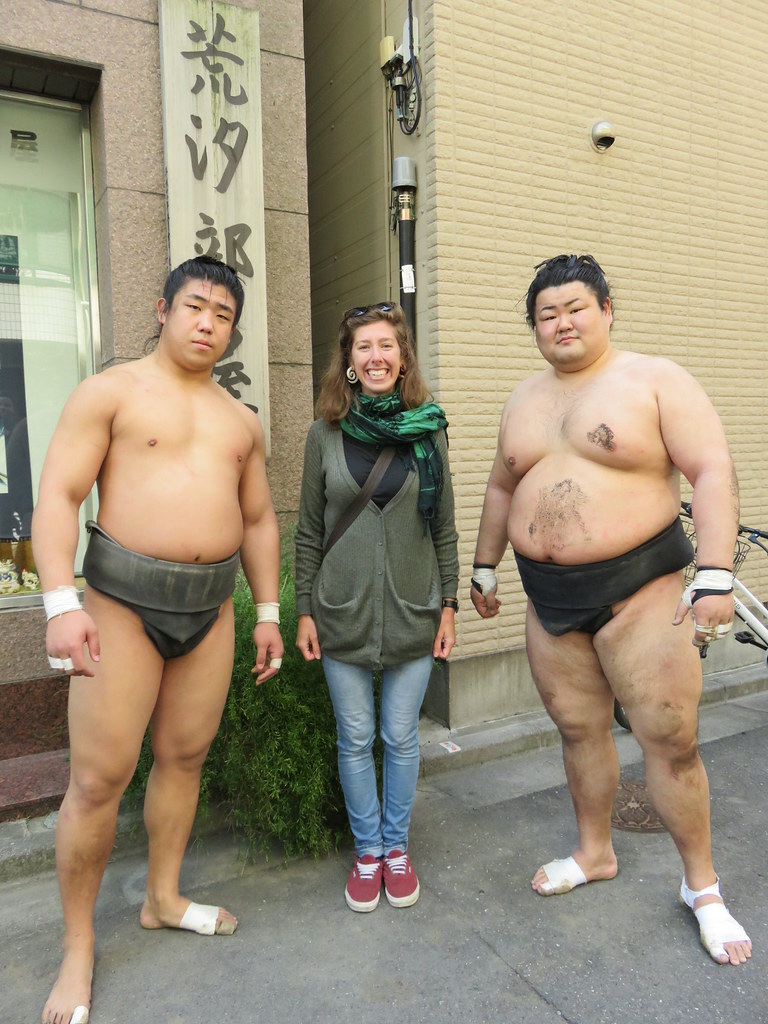 We spent longer than expected watching the Sumo’s and ended up arriving too late at the Tsukiji Fish Market. We missed the cutting of the giant tuna and most shops had shut up shop with hardly anything left for sale. We still saw some massive carcasses and giant fish heads, along with the biggest scallops we’ve ever seen but that was all. Craig tried some tuna sushi for lunch and didn’t rate it very highly, he had quite a surprise when he took a big mouthful of wasabi paste though. 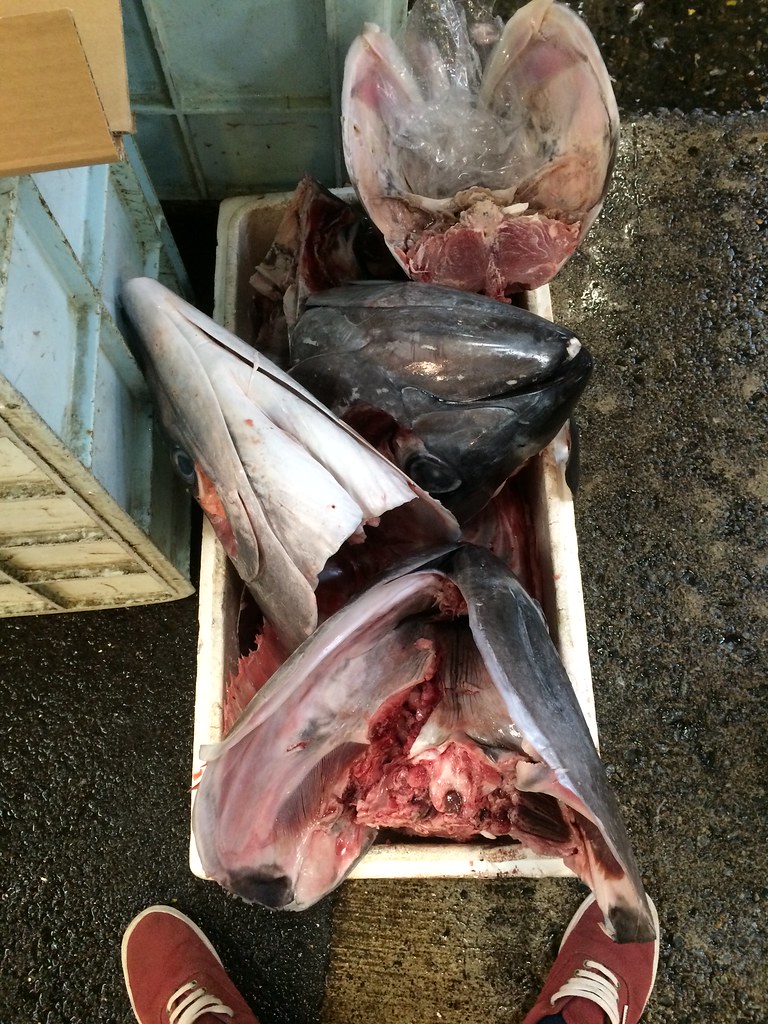 We crossed the city to Harajuku to visit the elaborate Takeshita Street (sorry but that’s just an awkward name in English and I ended up referring to it as ‘take-a-shit street’ to Craig) best known for having lots of eccentric shops which attracts the fashionable Japanese teenagers. We’d seen three amazingly dressed girls a few days back, all like cartoon dolls with pigtails and tutu style dresses. We didn’t actually spot much of that along Takeshita but there were some characters hanging around including a group of youngsters with a grungy, punky look to them and very trendy hair styles. Every other shop was selling crepes, they were thin yet moist, lathered with fillings and rolled into a cone. We opted for a cheesecake, whipped cream, caramel and nut filled one and it was to die for. 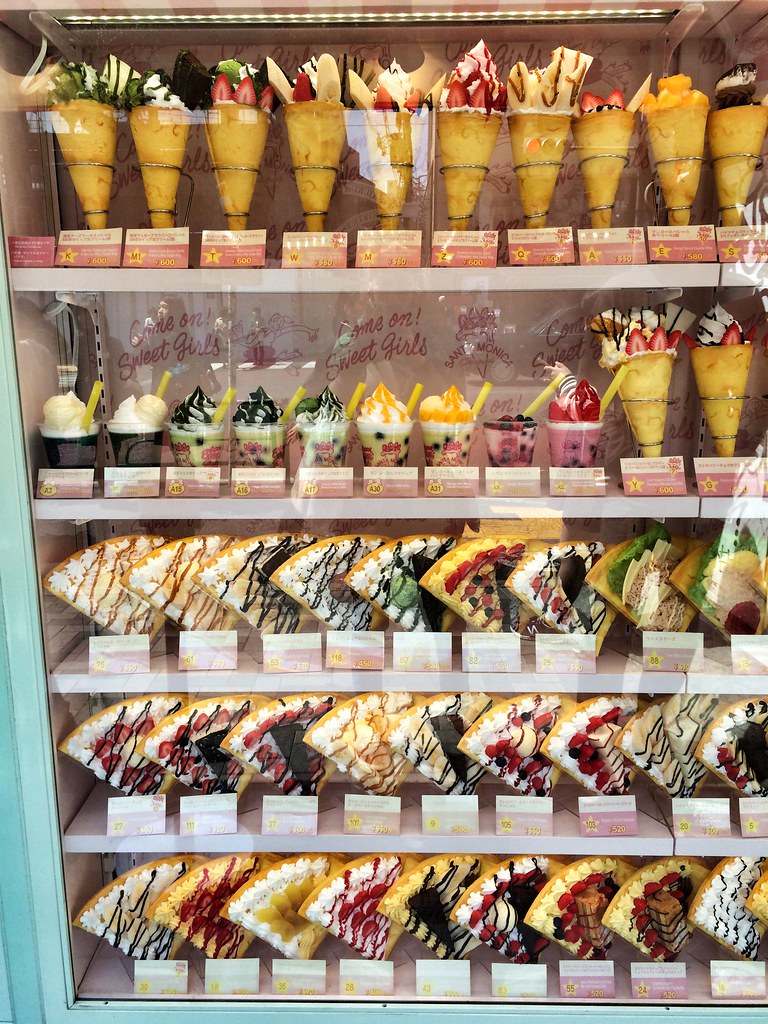 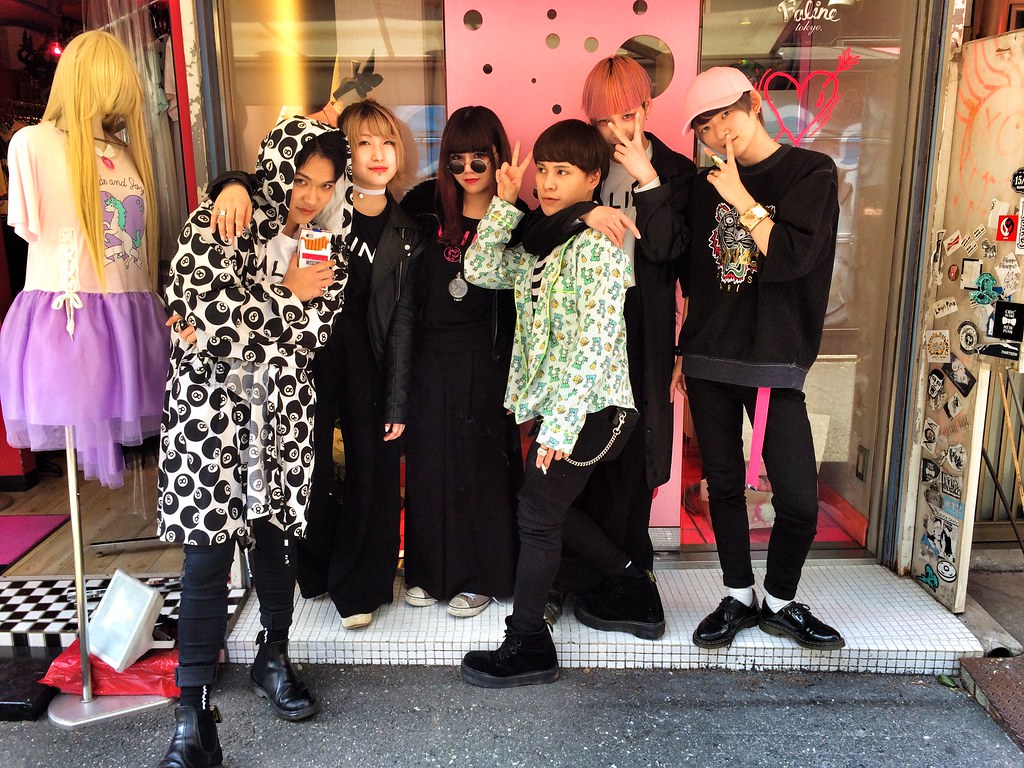 Another train took us to Shinjuku, it’s the busiest train station in the world and has on average 3.6million people pass through every single day. We headed to the Golden Gai area which is a cluster of alleys with teeny-tiny bars and eateries. They say it’s what Tokyo was in the 70’s so we were excited to check it out. All of a sudden fire-engines were coming from all angles and I spotted the first signs of smoke between some high rises. Helicopters were chopping above us and we knew it was clearly a substantial fire. Then we realised it was right where we were heading, we reached the golden Gai and ‘no entry’ tape was around the area with plumes of smoke filling the air. There were firefighters everywhere and news anchors rushing around. We later found out that a fire had begun in a bar under renovation and they’d disabled their fire alarm causing delay for emergency services and burning down three historic buildings but luckily only injuring one person. 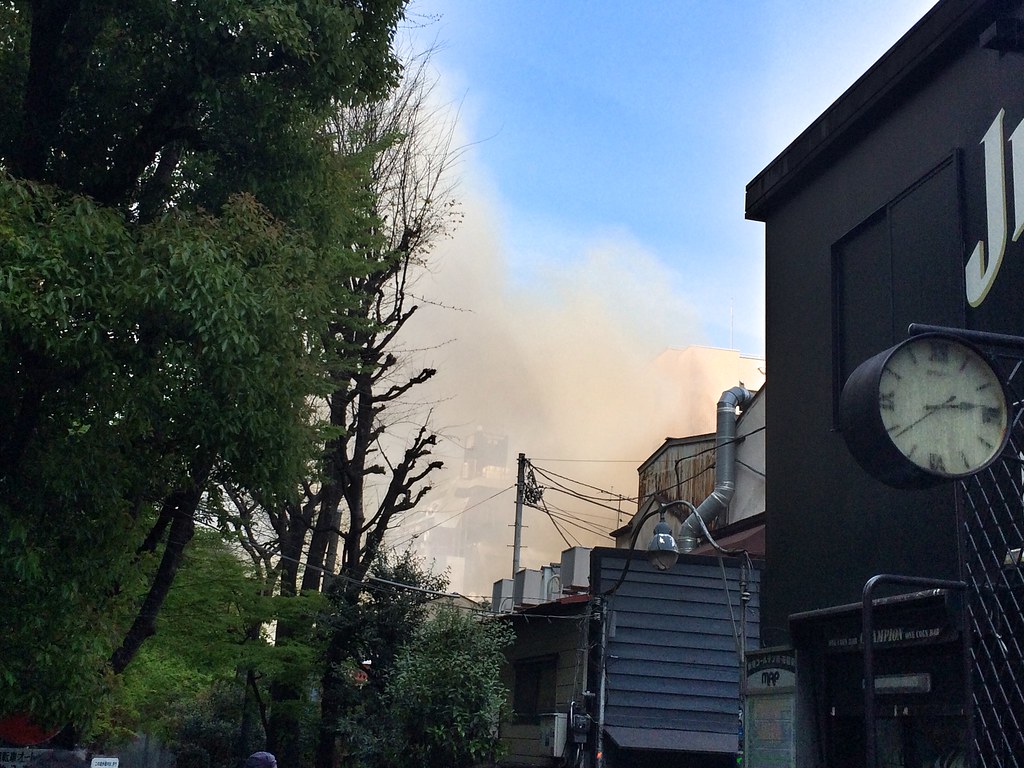 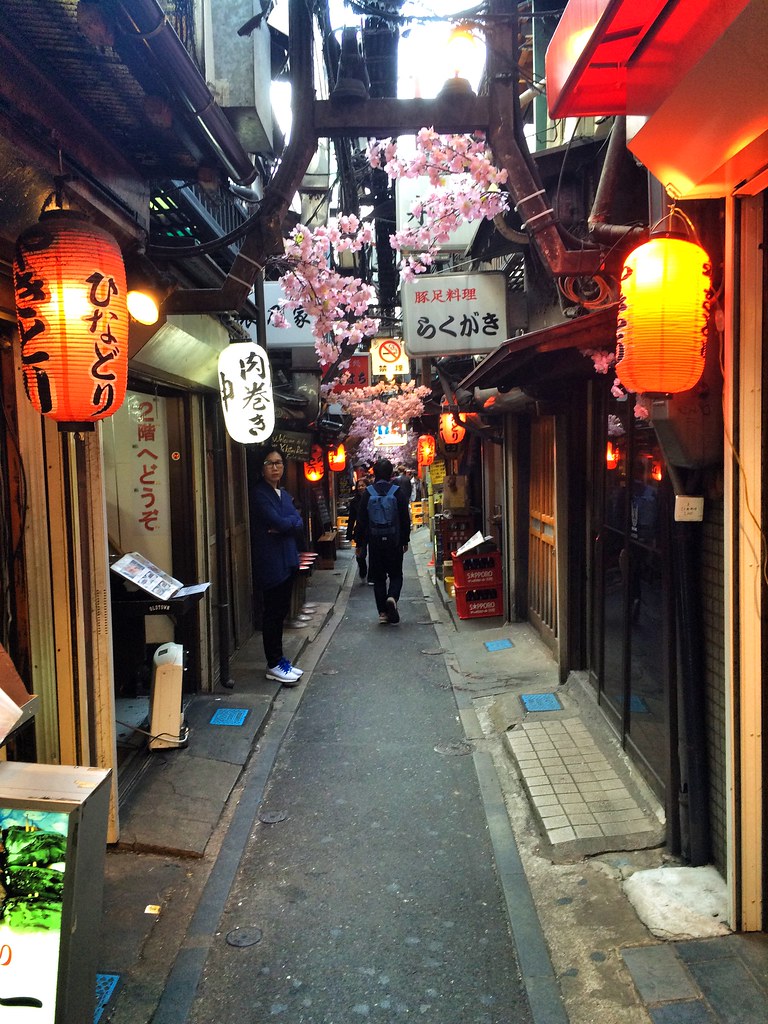 Our final stop for the day was the very weird Akihabara area, the electronic and anime hub of Tokyo. There were tacky arcades everywhere and Maid cafes on each corner where women dressed up as French maids serve you. We also noticed lots of sex shops; 5 story buildings full of sex toys and fake boyfriend and girlfriend gadgets. It didn’t feel right walking past a sex theatre in the day time when a man in a business suit came out the door and re-adjusted his trousers while speed walking down the road as if he was out on a work break!

So that’s our time up in Japan, it’s been wonderful but totally drained our banks. The people were extremely polite but seemed quite sheltered, they like to keep themselves to themselves. In our opinion they were more outgoing and smiley in China. But that’s not to say they weren’t friendly, I think arriving from the Philippines who have to be some of the most bubbly happy people in the world made it seem less chirpy. It’s a country of contrasts with old and new. People queue politely for trains only to push like a sumo to get on. They have strong traditions and rules of politeness which can be a little tricky to keep up with as a foreigner. I was mortified when I realised I’d left the bathroom and walked through an entire hallway with the bathroom slippers on, thankfully no one saw my blunder. We didn’t enjoy the food, it just wasn’t for us, and for once the western food was cheaper than a lot of the local stuff which seemed crazy and made us less reluctant to try new things as it was a lot of money to waste if we didn’t enjoy it.

We’ve slept in traditional Japanese rooms, witnessed snow monkeys bathing in hot springs, admired Mount Fuji, walked amongst millions of cherry blossoms and through towering bamboo forests, we’ve met Geisha’s and Sumo’s and had a taster of wacky Tokyo. I don’t know whether we’ll come back to Japan, it’s far too expensive for us, although travelling in a campervan would be a great way to save some penny’s and see some off the beaten track destinations.