It took seven trains to get from Osaka to Kawaguchiko which is part of the Fuji Five Lakes region. We did take one wrong train but still it would of taken six if we did it right. A bullet train took us most of the distance and we even got our first glimpse of Mount Fuji; a crisp, snowy peak rose above the fluffy white clouds surrounding the base.

Our final train happened to be a special one for tourists and consisted of only two carriages. It was totally bizarre with retro style corner sofas, a wooden play pen for kids and overall a very unusual set up. After a while we spotted Mount Fuji again and the clouds had all dispersed except for a white haze behind the mountain. The train conductor actually notified us of viewpoints, not just of Fuji but also waterfalls along the way and he would even slow the train down for us to to take it all in. We were encouraged to get off at stations along the way to take some Fuji shots and we were all given postcards and stamps. It was really odd as it was the same price as the normal train but felt like we’d paid extra for a cheesy but enjoyable tour. 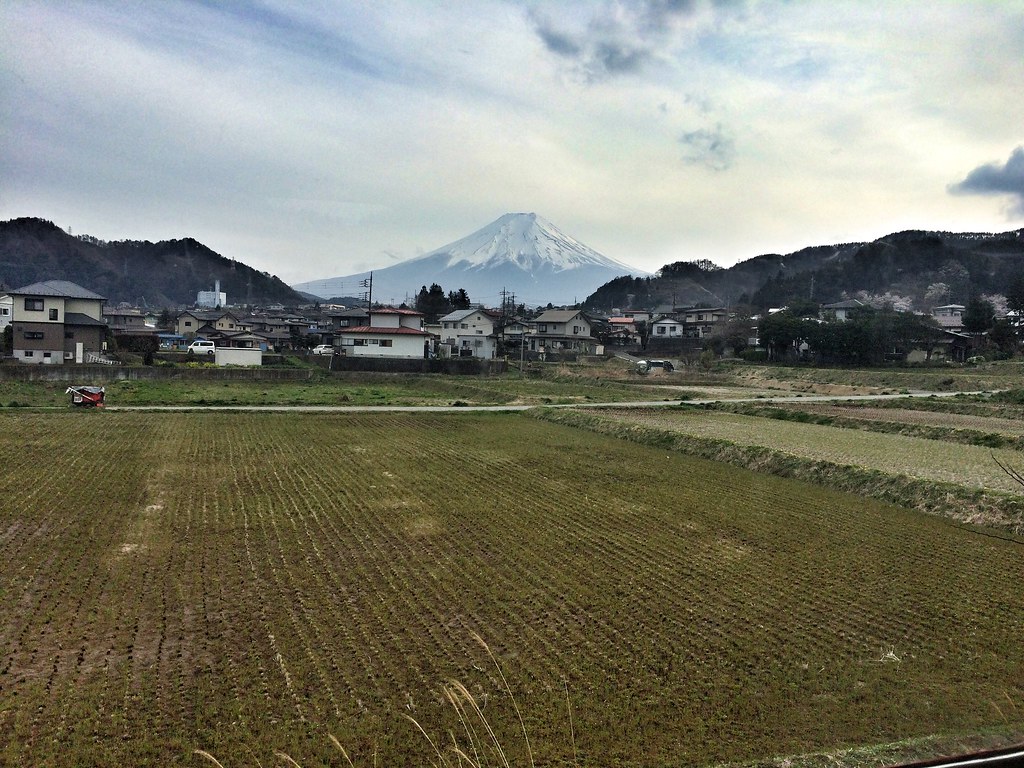 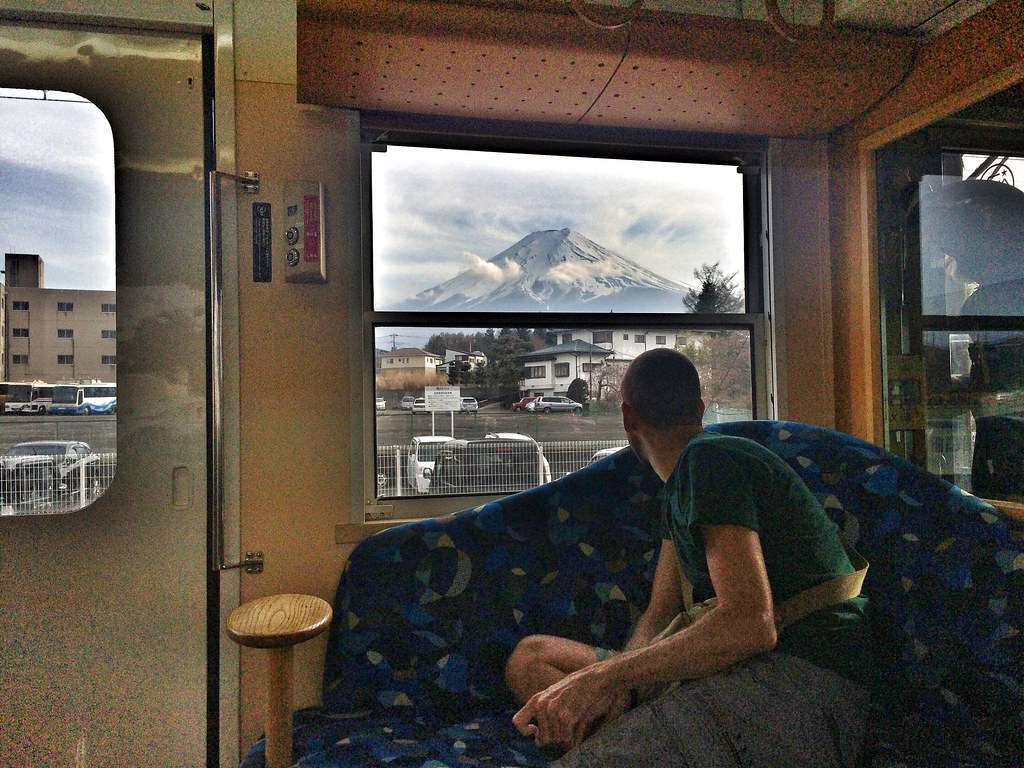 We checked into our hotel and headed straight out to Kawaguchiko lake to get some views of the mountain before and during sunset. We couldn’t believe how cold it was. It was freezing and we declared that our bags would have to be emptied and the long johns brought back out.

We had lots of beautiful views of Mount Fuji as we walked around the lake. It’s such a perfect mountain and had heaps of snow on the top still, although that’s not surprising considering how cold it was outside and the fact that it’s 3776m high. We crossed the bridge back to town and the mountain started getting some faint purple hues painted over the snowy peak from the setting sun. 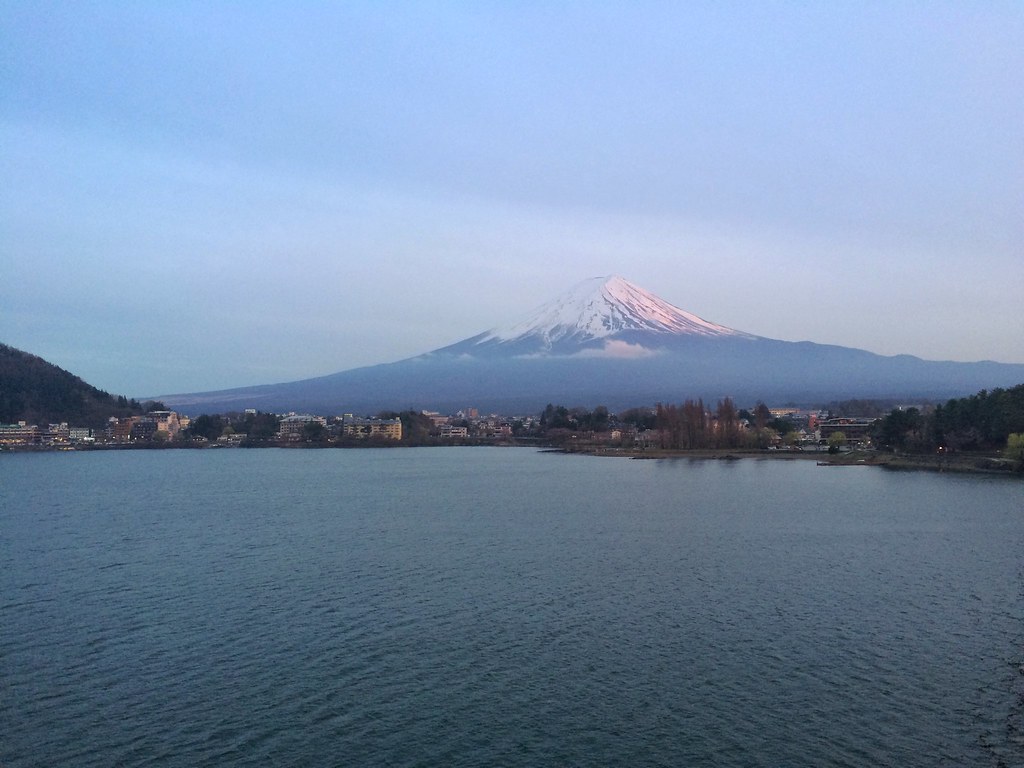 The next day we woke early and didn’t have a clue where to go or what to do. Fuji was still clearly visible so we thought about hiring bikes and going around the 20km lake but we ended up making a spur of the moment decision, which I think are sometimes the best, and headed to Chureito Pagoda. A train took us to Fujiyoshida and then we followed the signs till we reached a blossom lined staircase and Torii gate leading up a hill. The steps offered constant views of the iconic mountain framed by blossoms and branches. At the top, and the main reason we were there, was the Pagoda itself which is a fairly new building. It was a typical image of Japan; Mount Fuji, cherry blossoms and a bright red pagoda. It was a heavenly sight. 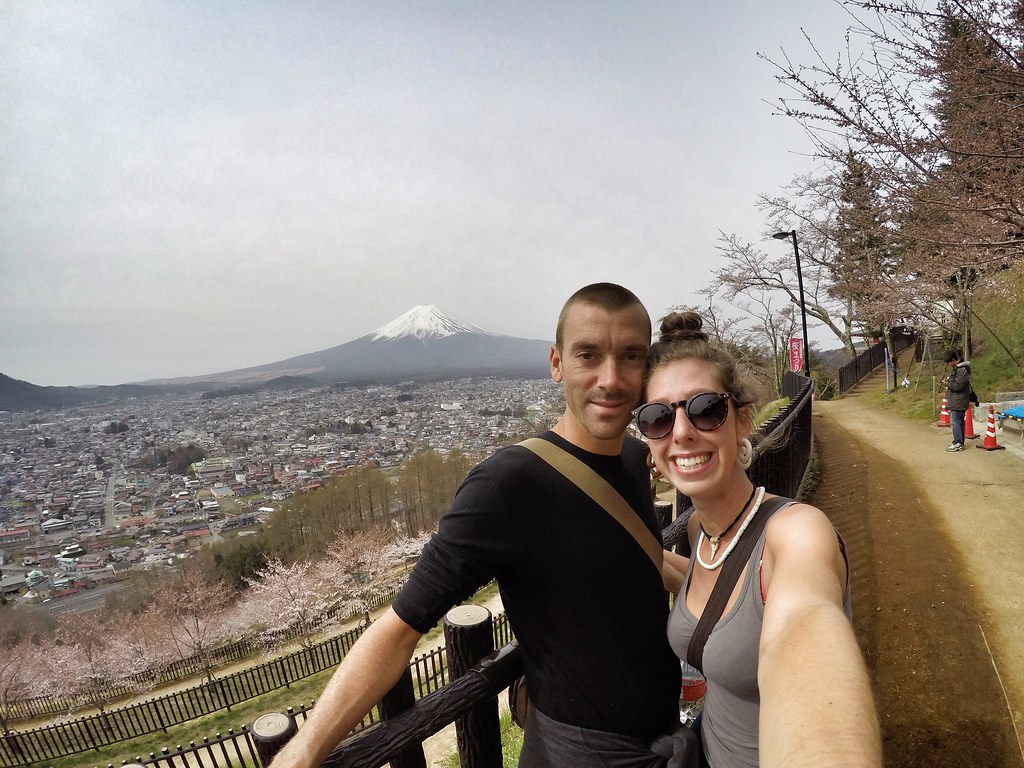 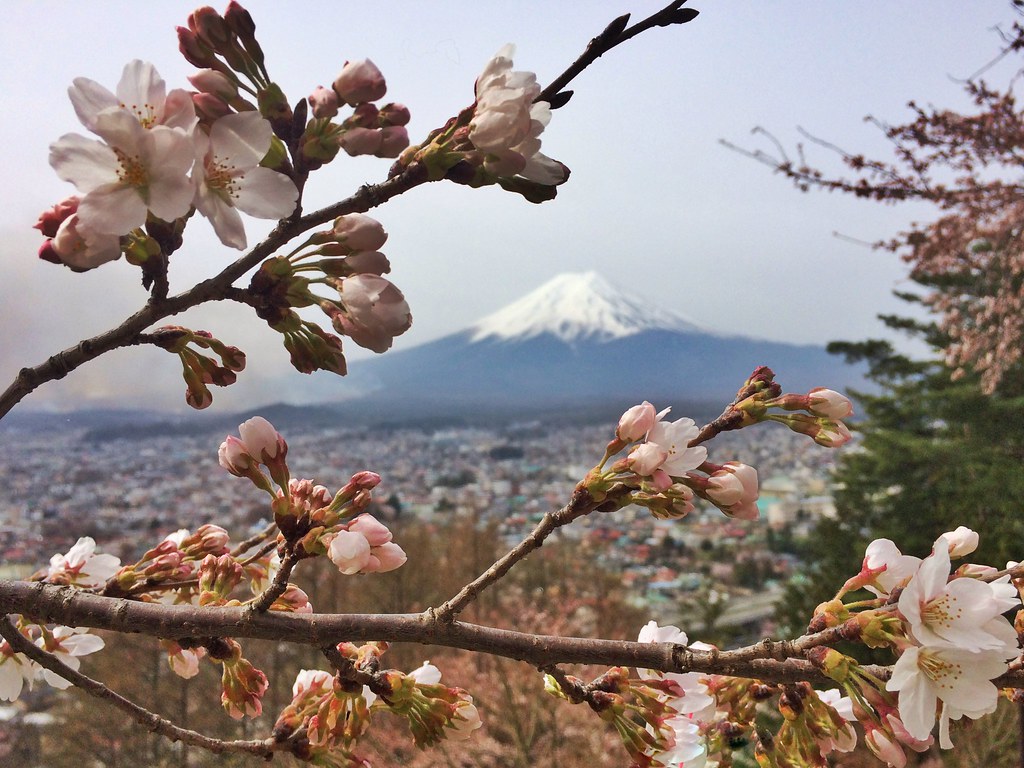 When we got back to Kawaguchiko we decided to walk around the lake to another area. En route we found a baseball range and couldn’t resist a try so had 25 shots each and it was a blast. Well, Craig was annoyed because he accidentally went in the fast lane where balls fly at 130kmh whereas I went in the 80kmh lane, hit some whoppers and pulled a lot of muscles. A lot of the cherry blossoms in this area of the lake hadn’t opened yet, but a small cluster had (probably a different variety of tree) and boy had they opened. The blossoms were wonderfully plump and half the trees were pastel pink while the others were a cotton-candy pink. They made the perfect setting for shots of Mount Fuji and we were also treated to some unique pink moss along the grassy shoreline. There were only small patches of this and it’s a big shame as its something I really wanted to see in Japan – the festival where they celebrate the vibrant pink fields of flowering moss takes place a mere three days after we leave the country, but it was nice to get a taster. It’s been a freezing cold experience but we’re so happy that we got to see Mount Fuji as its not uncommon to hear of people visiting and not even getting a glimpse of the mighty Fuji. 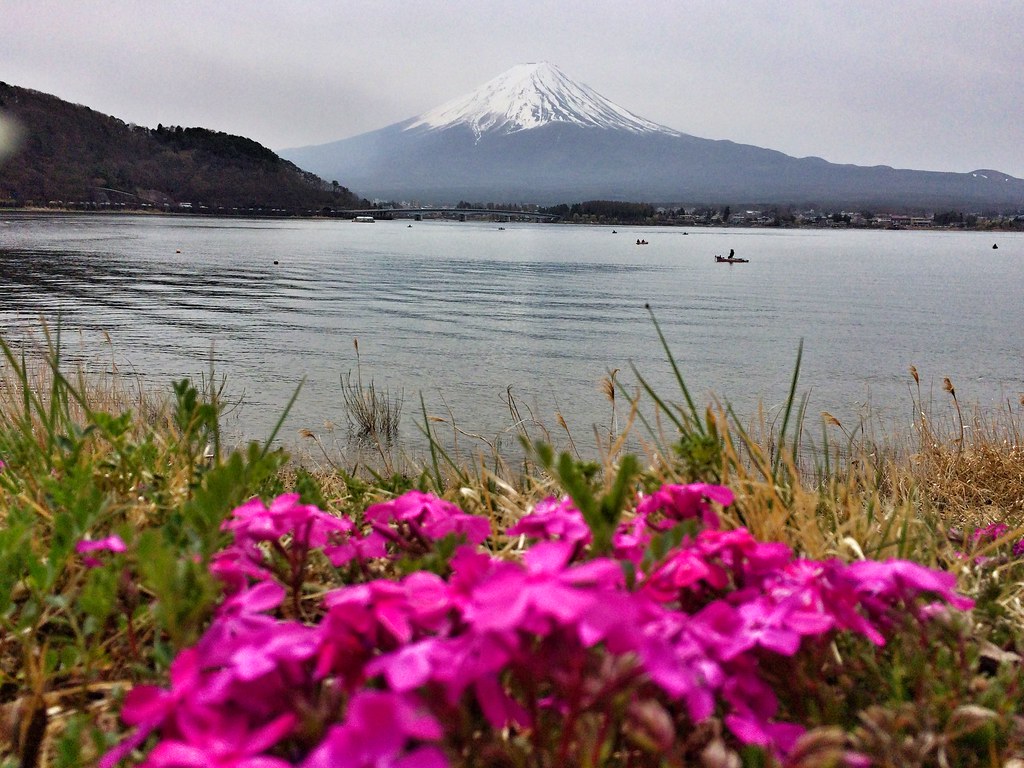 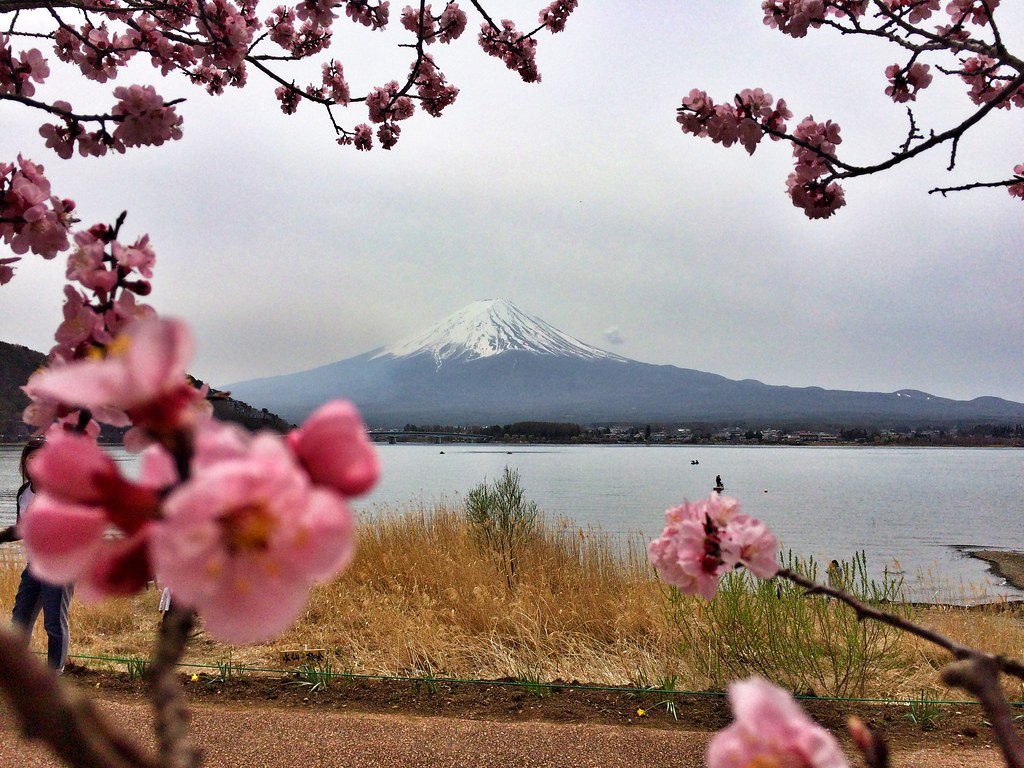 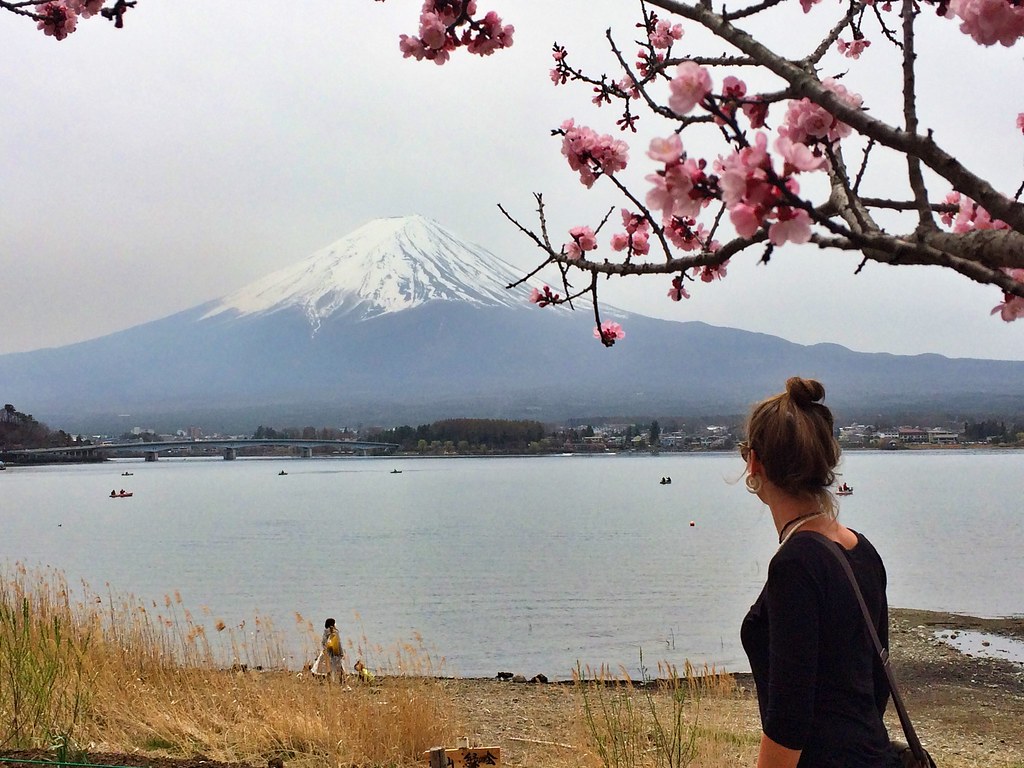