It was a miserable day and totally pouring with rain but we didn’t have any spare time to kill so headed to Nara as planned. A very wet walk even in our ponchos took us to Nara Park which wasn’t a typical park and lots of roads cut through it. The park is home to about 1200 wild deer and I was most excited about meeting them. We wandered past some temples and soon spotted our first deer casually hanging out amongst a group of people. It was ever so tame and didn’t mind being stroked. 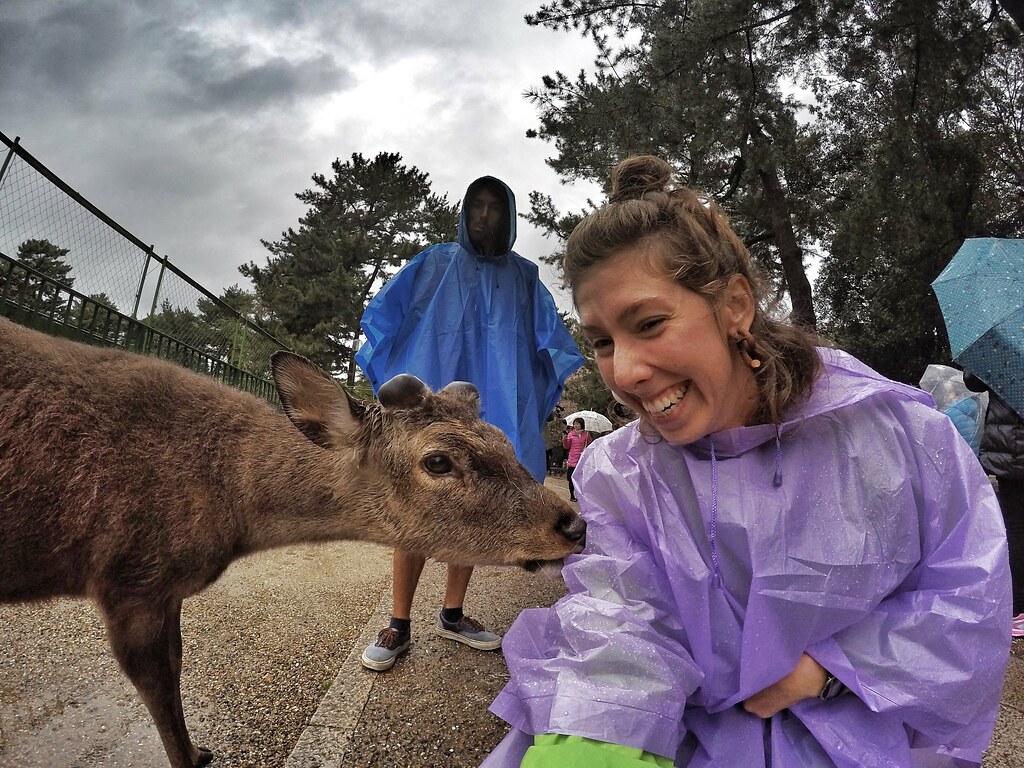 Gradually more deer appeared and we saw lots under some nearby cherry trees. As we got closer we realised they were cleverly standing on their hind legs and reaching up to eat the blossoms and leaves. It was so clever! There really wasn’t much for them to eat around, except for the crackers tourists bought for them and a couple patches of grass, maybe that explains why they kept trying to eat my poncho. 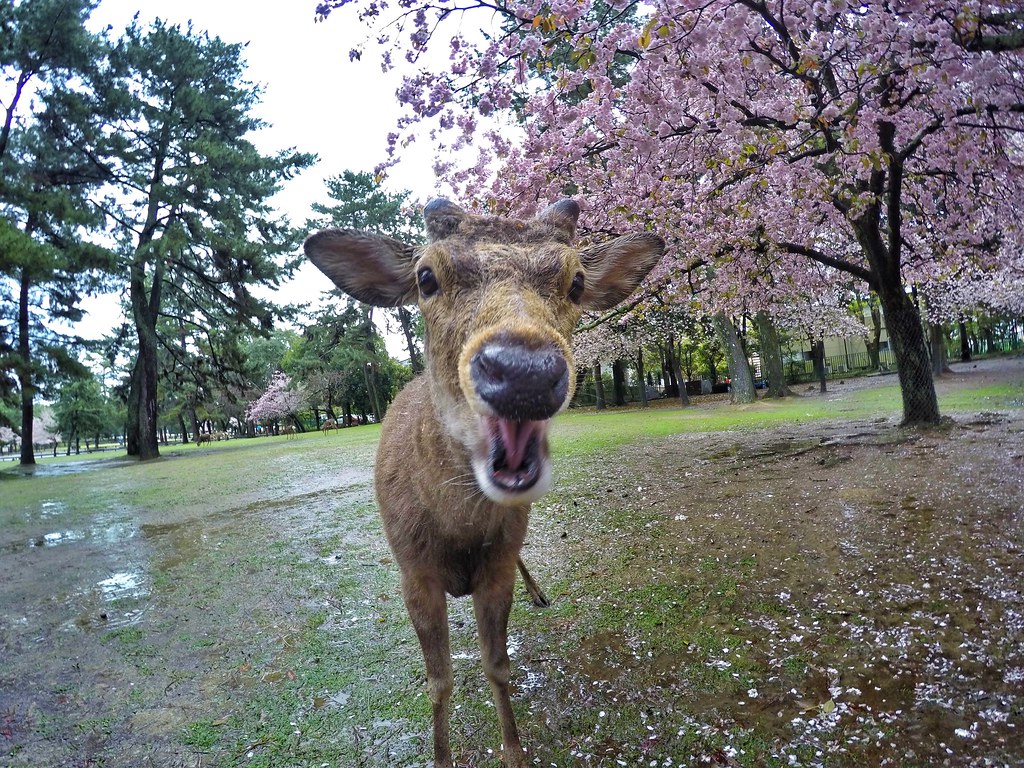 They were such adorable deer, and most of them were a nice and healthy size with a few young ones clumsily trotting around. The males were just beginning to grow their antlers for the year. A few had mini, sharp pointy antlers while most of them had two black balls atop their head which were weirdly warm and squidgy like black tomatoes. 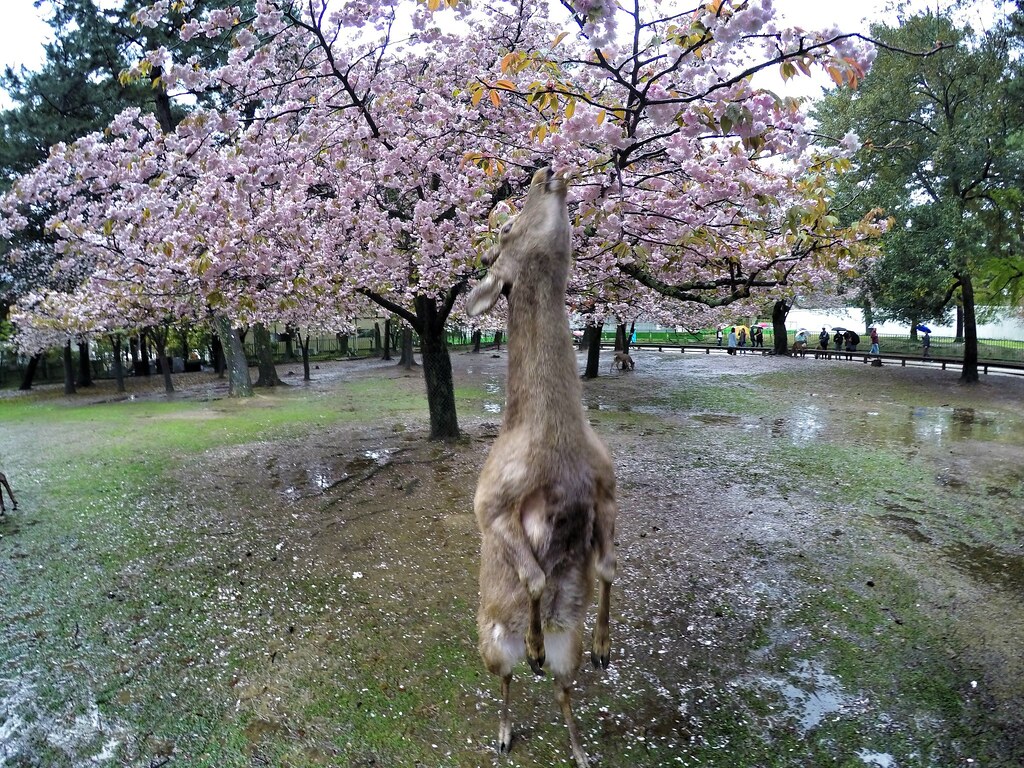 We spent ages photographing them in the rain and pulling branches down to help them eat. Interestingly when we did this they’d bow to us and some would keep bowing till we brought the branch low enough, they’ve obviously learnt this polite trait from the locals. 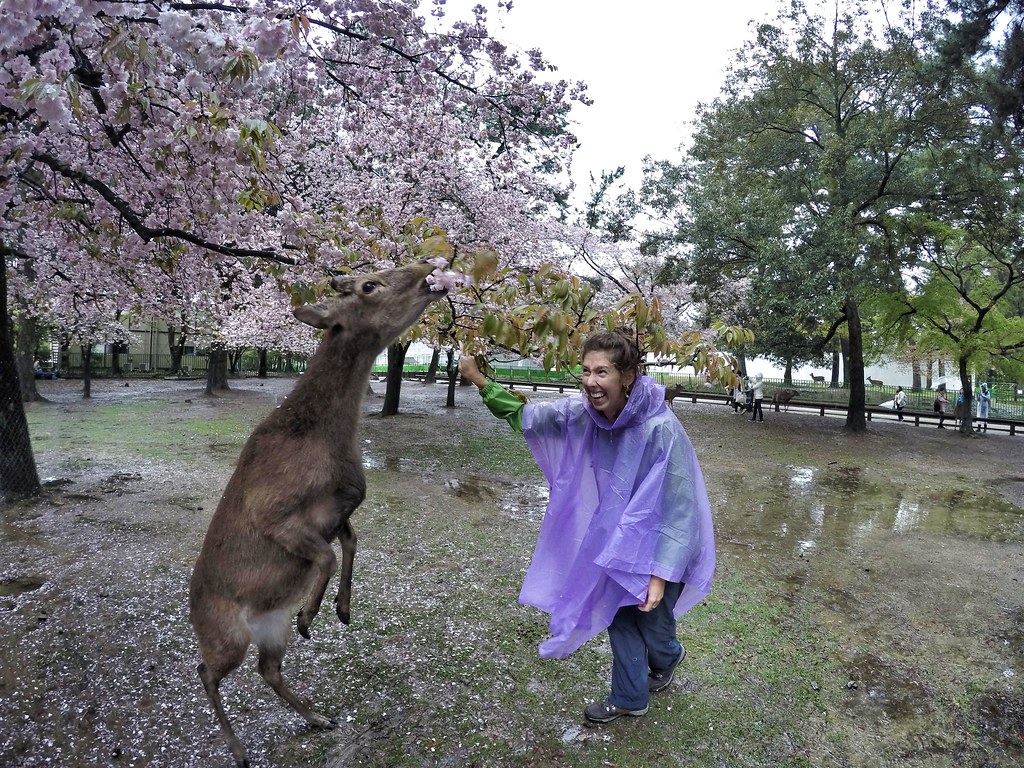 The park was also home to Todaiji Temple which is one of Japan’s most famous. It was originally built in 752 and remained the worlds biggest wooden building until Japan built a baseball stadium out of wood a couple decades ago. You’d expect another country to steal the claim to fame but Japan took the medal from itself. 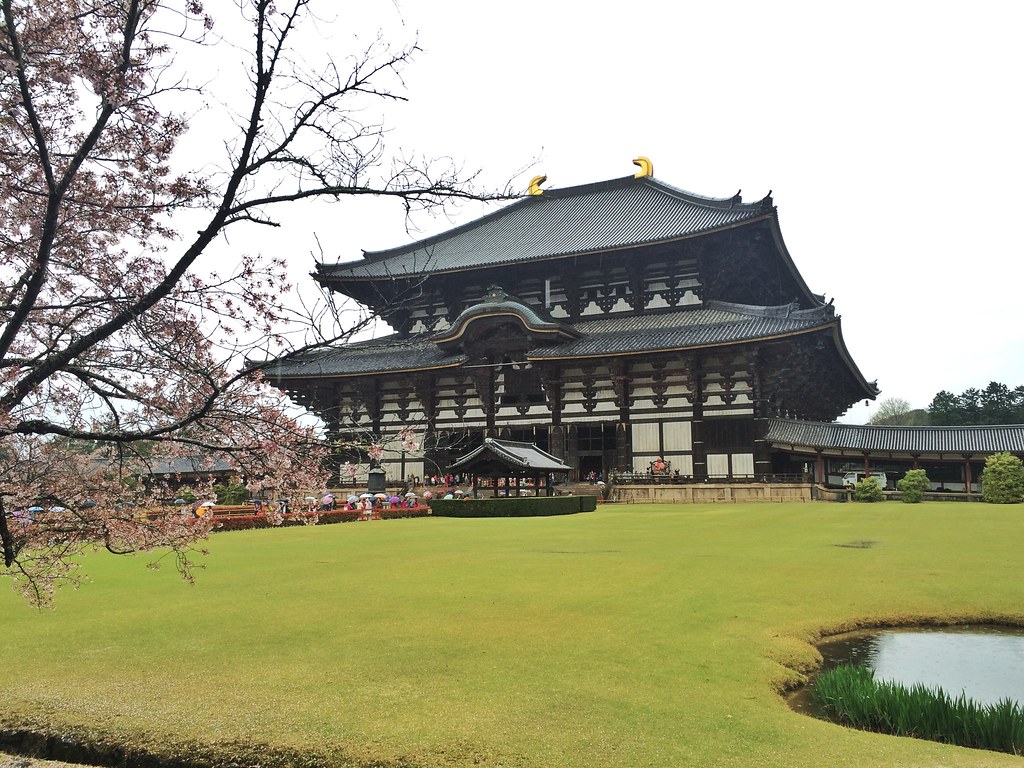 There were so many deer outside the temple gates and we watched a family buy crackers for them. The mum put a cracker in her two year old toddlers hand and the deer swamped the un-nerved child. The parents weren’t even bothered and were just photographing deer eating out their own hands while their twin girls stood beneath the deer, one in floods of tears and the other unsure of what was going on. 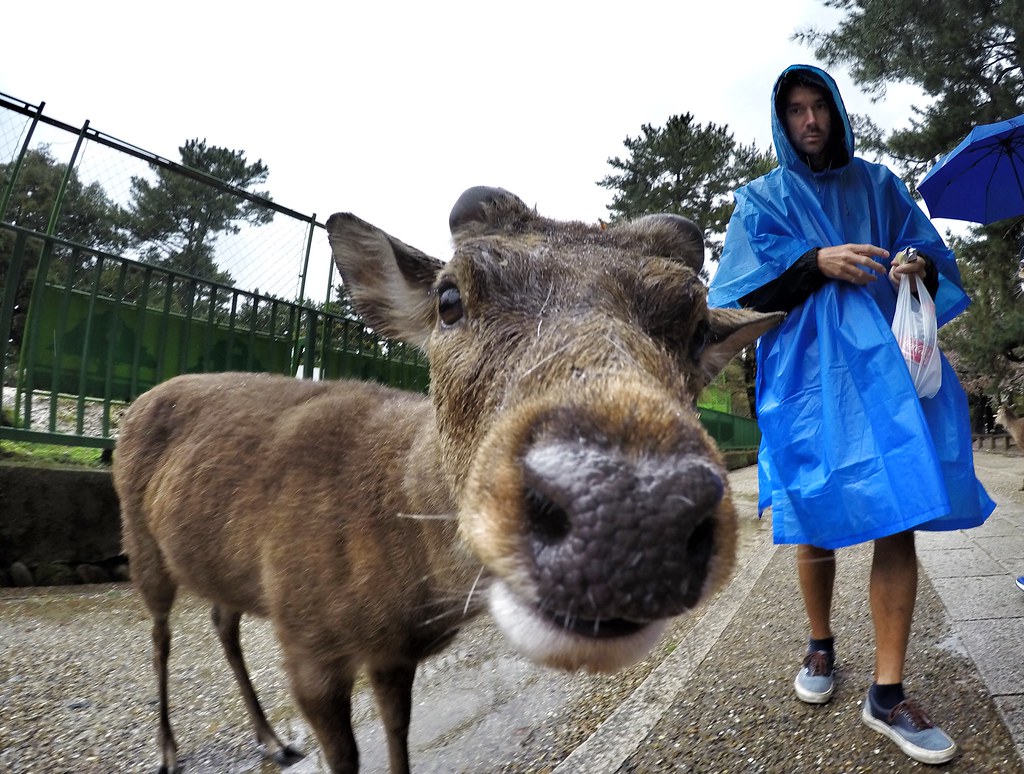 The temple was very big but maybe not as giant as I expected. Only 70% of the original building remains but it was still impressive. Inside was a giant 15 meter tall bronze Buddha statue right by the entrance with one palm raised in a hello position, this very hand is as tall as a human being. We were drenched to the bone by the end of the day and relieved to get back to our skanky room in Osaka.

The next day we took three trains and one crowded bus up to Mount Yoshino. Yoshino is home to over 30,000 wild cherry trees…so in other words it’s one of the top places to view the blossoms in Japan. A hike up a windy road led us to view points of the green hills and valleys which had huge patches of pink through them. It was such a cool sight, a pink hillside!! Roads wound through the blossoms below us and the weather held out to take in the beautiful surroundings. 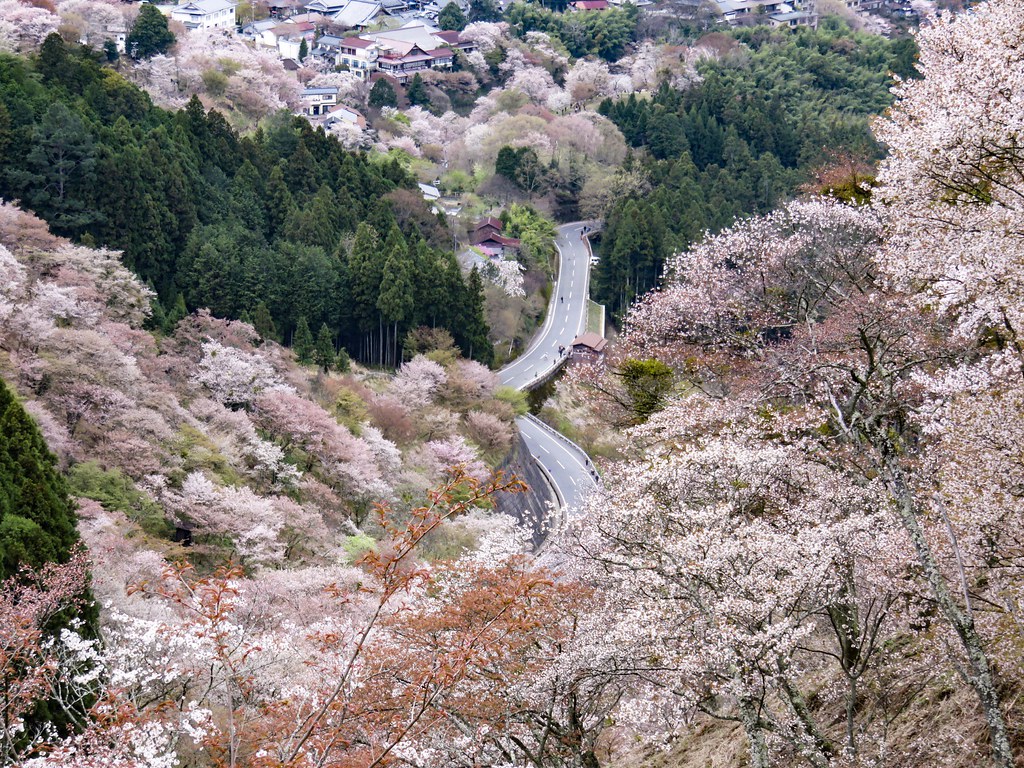 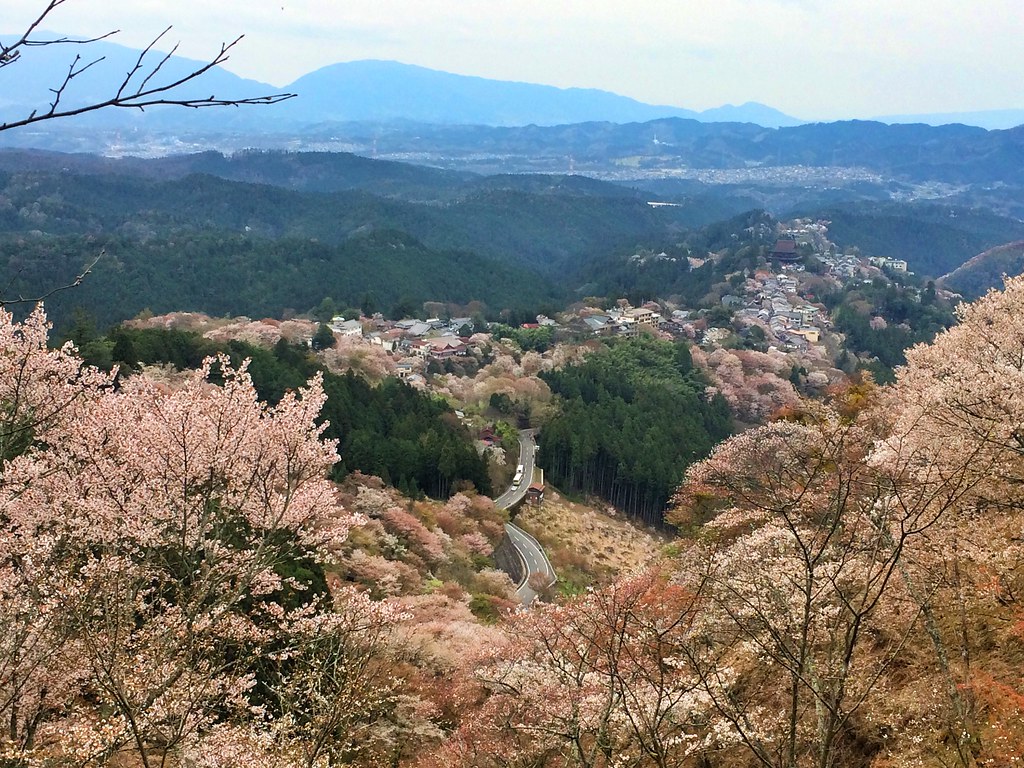 We strolled back down and through the main town which was lined with shops and eateries. Lots of them were handing out tasters, which we always love! Except this one: A man placed some sort of pickled vegetable in my hand with a paper cup on top. He pointed to a machine behind where I filled my cup with some tea, put the vegetable in my mouth and gagged. It was disgusting, I don’t even know what it was but I couldn’t chew it more than once due to fear of dispersing more potent flavours. I looked at Craig and he could see my eyes popping out in panic and the lump of the vegetable stored in the side of my mouth like a hamster. The bin was right next to the man that gave me the taster so I had to run down the road and spit it out, at least I had a tea to wash it down with afterwards ay…well, that tasted like ashtray water so things weren’t looking too great for my taste buds that day.

The town was bustling with locals and the pretty stalls had artificial blossoms tied up along them. Varieties of cherry trees were dotted along the road and so were temples. One of which offered the best view of the day across the colourful valley. It was a really lovely day out, and then Craig went and fell down the road (normally he leaves clumsy things for me!) and cut his foot pretty badly. We didn’t have a chance to look at it because he didn’t want to look like a big girl in front of everyone and then we had to rush for a train. But a kind lady on the train spotted it and gave us a handful of plasters which was very sweet. 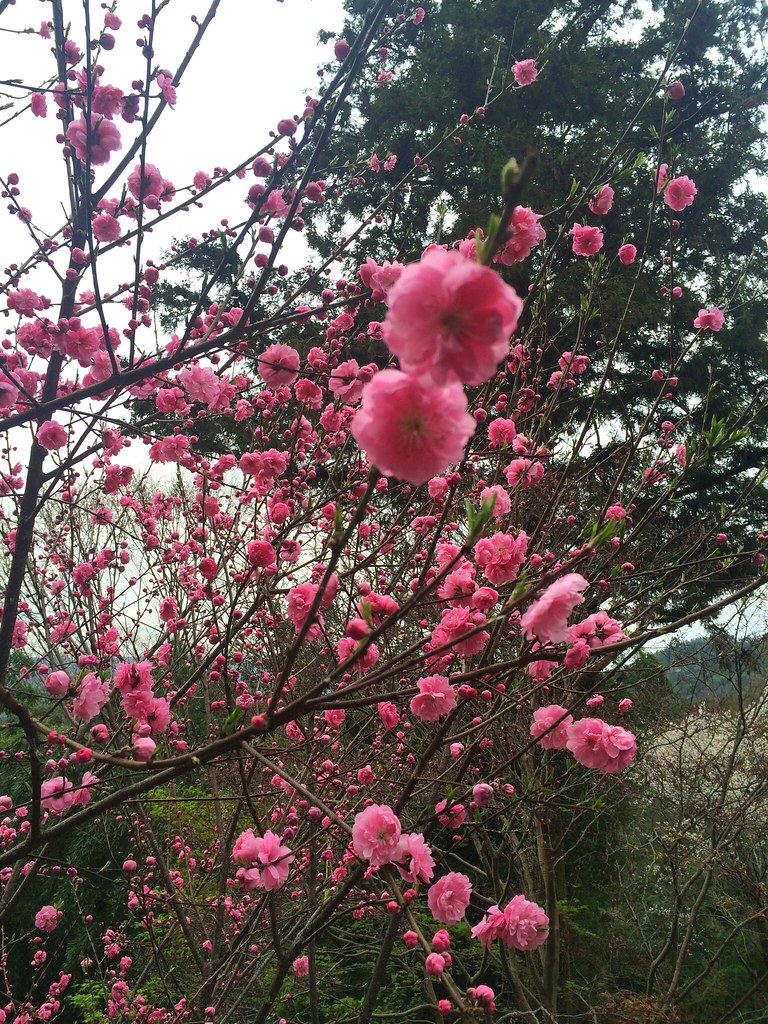