Mount Huangshan, otherwise known as the yellow mountains are said to be among the most impressive of China’s mountains. So as nature lovers we had to visit the area.

After battling through Hangzhou’s traffic in a battered taxi full of cctv cameras we got a bus from the west bus station to Tangkou, a 20 minute drive to the National Park.

I was freezing cold when I got on the bus, but a little while into the journey I felt an overwhelming heat on my face. Craig was undressing out of his layers and every time we looked up at the bus temperature reading it went up another degree…all the way up to 30 degrees!

We passed lots of lush green hills covered in bamboo forests along the eerily quiet highways and made it to Tangkou. A Spanish girl was on our bus and asked to come with us to our hotel which we’d pre booked. She asked us if we’d been to Hangzhou – stupid question as we’d all just got the bus from there, and then she realised it was silly and we all laughed and she literally couldn’t stop laughing, I kept trying that fade out laugh thing where you sort of finish the giggle with a sigh to say OK that’s enough of that joke but I had to do it four fucking times before it worked. Where’s this girls goddam off button?!

A very jolly taxi driver took us to the hotel and it looked nothing like the photo, plus there was no one around. The driver kept pointing to the Chinese hotel sign slowly as if doing it that way we could read Chinese?! Eventually a lady ran down the road and checked us in. The rooms were lovely but with a distinctive arctic chill to the air, the bathroom however was grimey and the hot water wasnt working which made washing our hands unbearable in the icey water. They had one air con remote for the entire hotel which we had to pass between us and the Spanish girl and it only went up to 20 degrees so we spent most our time under the duvet.

We woke at 6am and had to try and stomach a pot noodle for breakfast before getting the shuttle bus up the mountain. We went through dense fog as we wound our way up a steep road and then all of a sudden it was crystal clear, just very high cloud. We were so happy!! We zoomed off the bus and bought our national park (£15!!) and cable car (£7) tickets and only had to wait a few minutes to be put on a cable car, in peak season, you’d be queuing at least 45 minutes. Although the car had filthy windows, we could see the incredible scenery already and it looked amazing. Then we went through fog and the visibility turned to crap and it stayed like that most of the day.

From the top of the Yunung cable car (the eastern steps) we followed concrete paths and steps around the park. The first section clung onto the edge of a sheer cliff but you couldn’t tell how big the drop was with all the fog. We went to numerous famous viewpoints and peaks and couldn’t see a damb thing. Most of the time we were walking on our own but certain popular sites would have big tour groups with the guide blaring out information through a microphone. A few people we passed even had speakers and were playing loud music, why on earth were they at a national park?!?

All the groups wore bright yellow ponchos and some had thick blue rubber shoe covers and even wore crampons. We looked well over dressed in our waterproof pants and jackets (mines not so waterproof I just found out) and our hiking boots as 90% of the visitors were in normal city ware with the poncho on top. We didn’t see any other westerners all day.

We passed lots of porters who apparently carry up to 100kg!! They used a thick bamboo stick over their shoulders and had heavy loads on each end. You could literally see their body’s tremble as they heaved the weight onto their shoulders. Their wee legs trembled and they would only go max 50m before having to put the load down and go again.

We made loads of progress at the beginning so made an effort to see lots of areas as we didn’t want to leave the park early in case the clouds parted. Flying rock was a cool site that was actually visible, it was a huge boulder standing upright. As soon as we got to the rock a huge patch of fog cleared and it was the best view we had all day. There were jaggered mountains and sharp rocks, and the pathway led along the steep edge. As quickly as it cleared, it was foggy and even began to snow. We did a long walk to cloud dispersing pavilion where the clouds are said to almost pour out like a blanket of fog between the mountains, I think it got a bit carried away dispensing the goddam clouds – total white out. Visibility was really poor, maybe 20 meters at times. The snow got heavier and turned from tiny hard snow to thick dollops and it started to set on the ground.

I think it’s a Chinese thing to put steps everywhere. We’ve never been to a national park before that is all concrete paths, not one mud track in sight. Not only that, the park has over 60,000 steps, and boy did it feel it! They were brutal up or down. Craigs knee was playing up and then my hip started hurting.

The western area of the park seemed to be much longer distances between sights and most of the time it was only us walking around amongst the mist. I kept worrying that we’d taken the wrong path and the fear of having to do extra steps back made me feel weak. The snow began to set and the path became slippery but we trudged on.

We’d originally planned to walk down the western steps and hoped the cloud would clear like when we came up the mountain, but after a while we decided a) it would be rather rushed to walk down before dark b) we couldn’t be fucked, our legs were killing us. So we headed down to the Yuping Cable Car, down a hundred or so steps, to find it was closed. The lifts were stationary, the ticket booths were locked, and there wasn’t a soul in sight, let alone a sign ANYWHERE in the park notifying the fact that the lift was closed. What bloody plonkers.

So we went back up the hundred or thousand steps, I can’t remember, and had to go back down a different route said to take 2 hours. We weren’t even sure if their would be buses waiting at the bottom, I started to panic that we’d get to the bottom there were no buses, it was dark, Craigs leg was swollen like the elephant man and all we had to survive a night in the wild with some banana chips, peanuts, a key ring torch, a lighter and I might of saved the day with this last item I packed, our foil blanket!

So down we went, probably 30,000 steps and I feel like I’m not even exaggerating when I say that. It was the most relentless walk we’ve ever done. We did pass a couple of sections with awesome sharpe rocks coming out of either side of the pathway, and then the rest was a blur. We tried to run down to make sure we got down in time and also the speed seemed to be easier on the legs than all your weight going down slowly. We saw a couple walking up the steps with backpacks, they’d obviously come to this entrance expecting to get a lift up but with it closed they had to hike up and I just wanted to hug them. It would of been 10x worse going uphill and at least a 5 hour hike.

We made it down in 1.15 hours and thank god a bus was there and already half full. The ticket seller got on the bus as we were leaving and I wonder if we got the last bus of the day.

Once we dragged our feet back to our hotel from the bus stop we asked our hotel lady if we finally had hot water for a shower and she suggested we grab a bag of clean clothes and she takes us down the road. We didn’t have the energy to argue so followed her all the way down hill to a spa. I had the privilege of using a communal shower, and even the communal squatter toilet that had no door. There was so much hair on the floor but my Havaianas kept me safe and it was an amazing hot shower. I even had a heated changing room and hairdryer to use. Poor Craig though, his shower was set in front of the massage table and plunge pool, and both had guests who stared at Craig non stop. We were provided towels though, so we could protect our modesty, and by towels I mean a flannel. We were probably better off just placing the flannel over our faces so at least they didn’t know who the bodies belonged to. 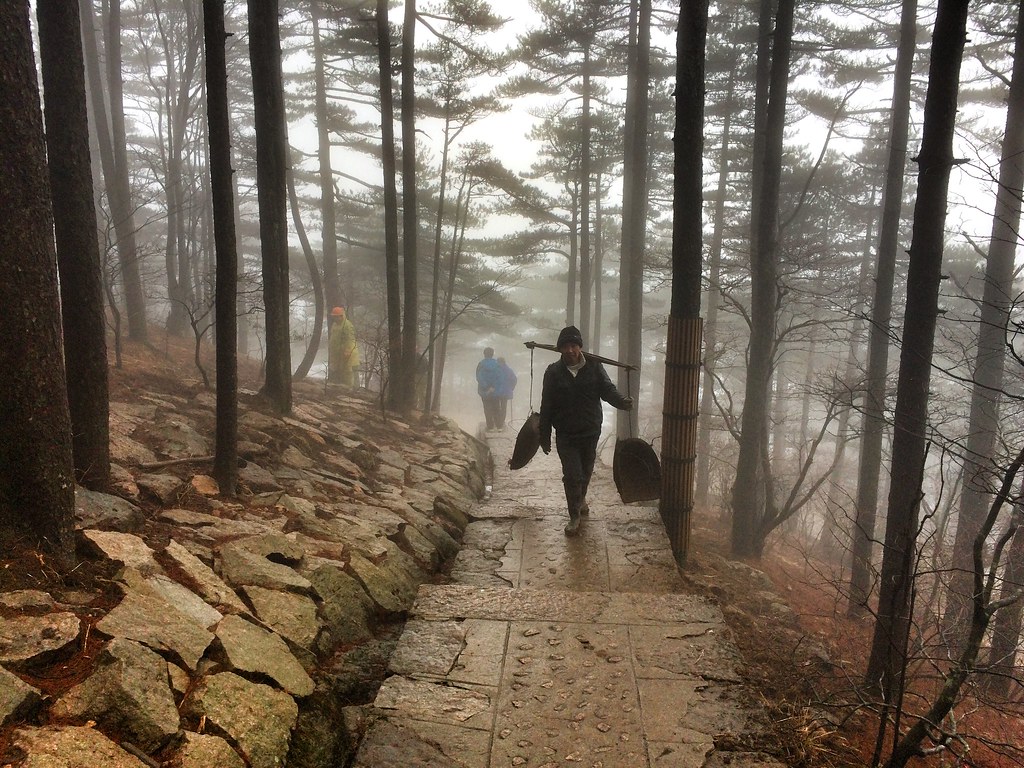 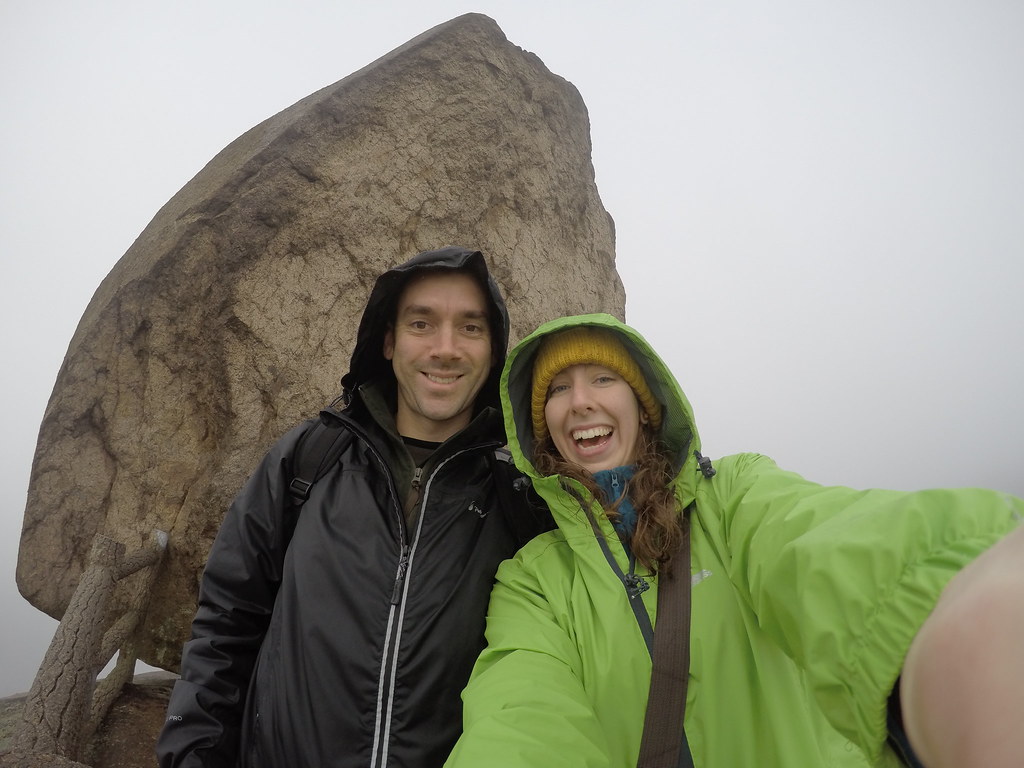 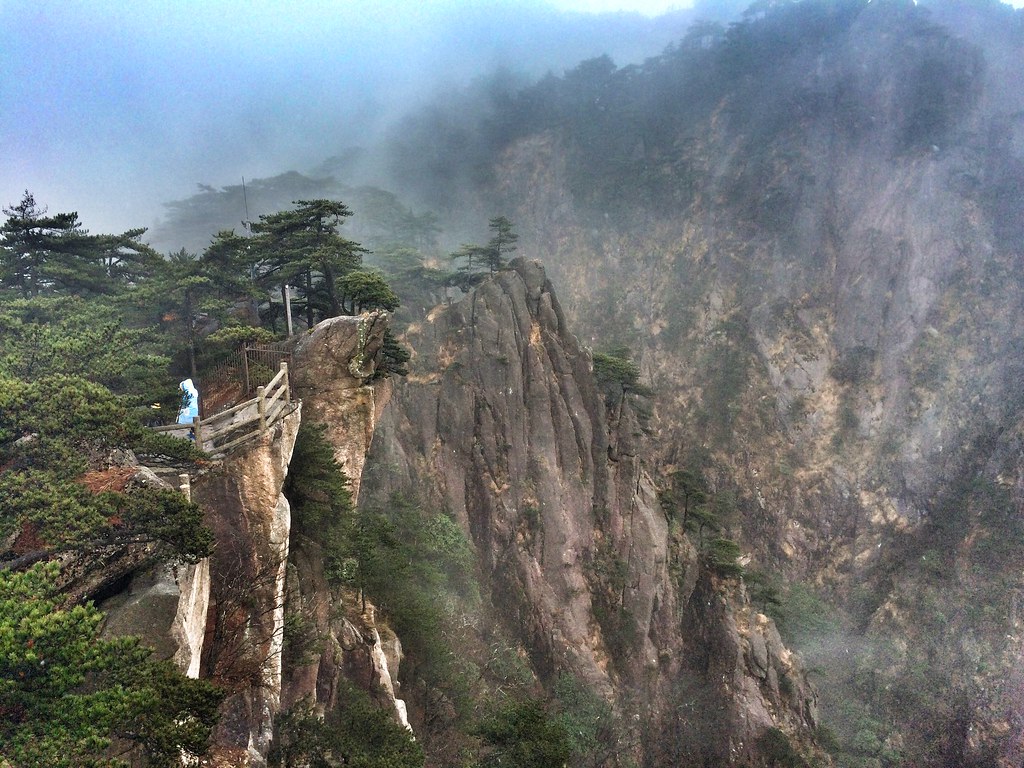 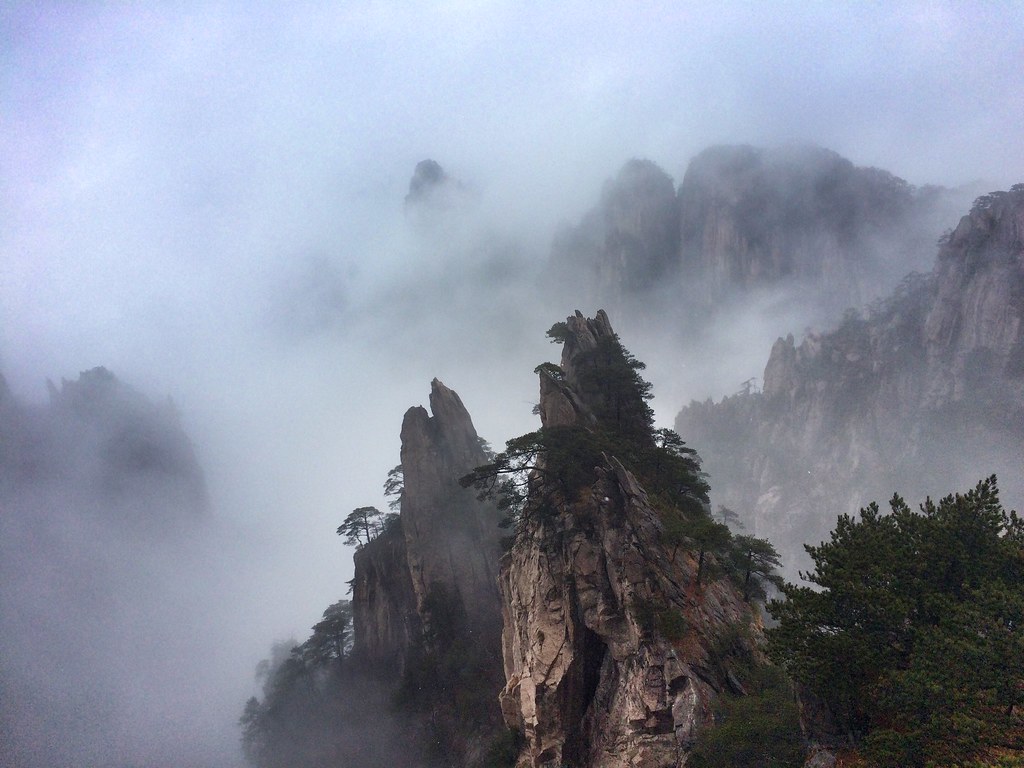 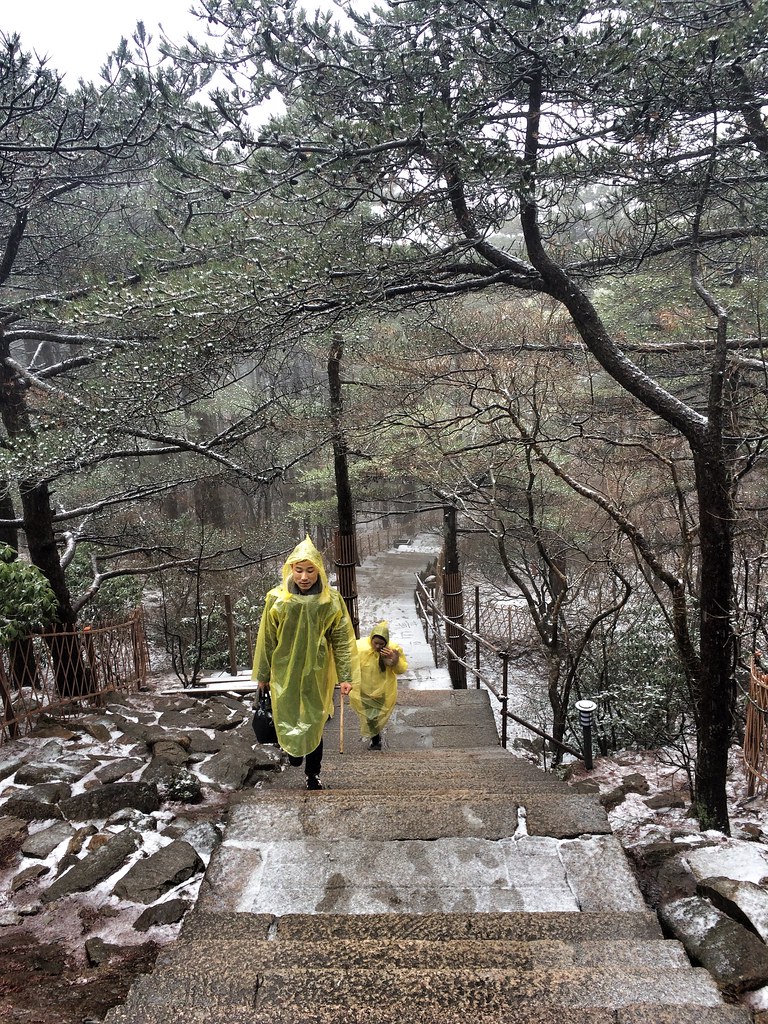 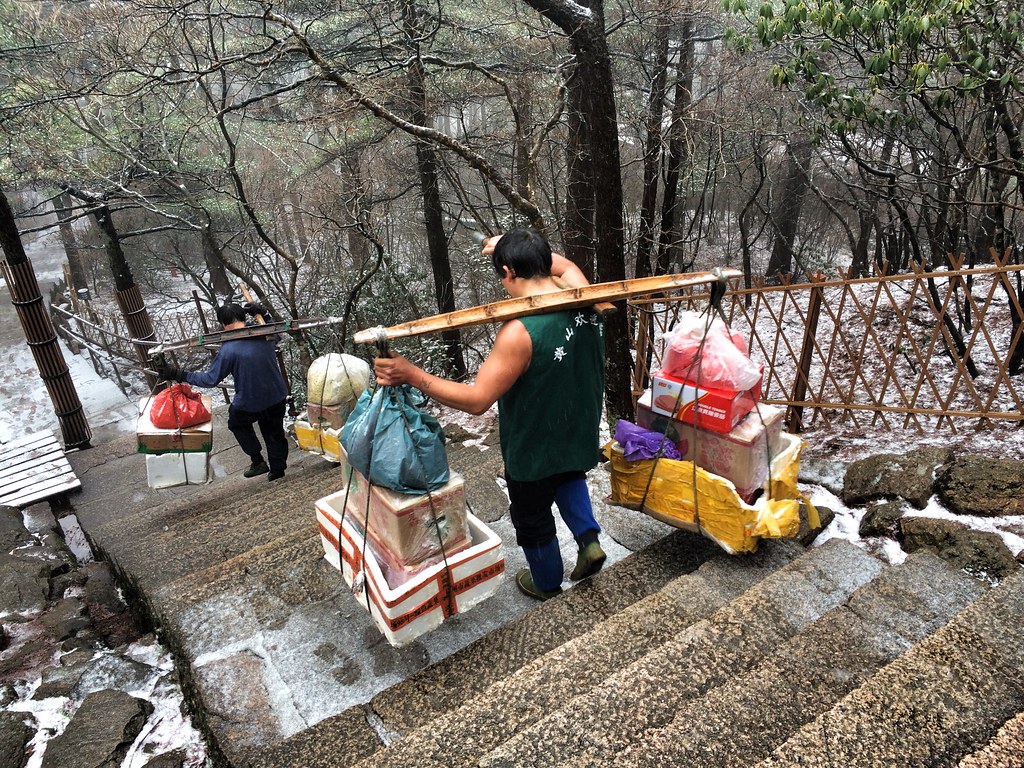