It was time to leave Shanghai so we got back on Harmony the super fast train and headed south to Hangzhou, said to be one of the most famous sites in China.

When we got off the metro we had a complete change of scenery, we walked through an area of street stalls and everyone was Muslim and making lots of tasty looking food, quite unlike Chinese food.

We checked into another YHA hostel and wondered along the main pedestrianised road. It was full of shops and eateries. Hangzhou is famous for its silk and longling green tea, the tea shops all had mini tasters so we had a little to warm up and we can’t believe how little flavour it has. A shop assistant followed us around and gave us tasters of green tea cake and rice tea cakes, both required a quick swig of weak tea afterwards. At night the street had a carnival atmosphere with games, gambling, men drawing people’s portraits and even carving their portraits out of clay. They also have these mini theatres where you look through little binoculars in a wall and a man changes scenes and narrates the whole thing – well I’m guessing that’s what’s going on, he seems to slam a tambourine after every punch line. Every shop had a sales person outside with a microphone blaring out their bargain deals, it was pretty intense.

The next day we hired bikes to explore the scenic area of West Lake. The city and lake side has bike stations which were fab to use. You pay about £30 deposit, and are given a card to swipe and unlock a bike and off you go. We’ve been so cold every day in China so we really wrapped up warm, and the bloody sun managed to punch it’s way through the pollution and we were stinking hot and uncomfortable!! Sod’s law.

We stopped along the way at temples and pagodas with the hazy mountains in the distance and the glistening water beneath. The Leifeng Pagoda was a beautiful sight so we decided to pay to have a look inside which was a waste of money. Two escalators led us up to the pagoda and inside were the foundations of the original building built back in 977. A lift took us to the top and the view was pants. It was so hazy and nothing of interest from any angle and Craig was disappointed with the lack of literature.

A pedestrianised causeway cut across the lake which was tree lined and had numerous bridges to struggle up and over on the bikes. We visited on a Saturday so the place was really busy, can’t imagine it in summer time. Benches were placed along the shore line and there were lovely views across the lake to bridges and pavilions with traditional arched roofs.

We decided to cycle to the Chinese tea museum to check out the tea farms and luckily it was a flat ride but by this point our bums were killing us, I have no idea how people do long cycle rides. The view across the neat rows of tea bushes with the layered hills behind was beautiful and well worth the detour.

When we got back to the cycle station we’d started our day at, the machines were all off and Craig got all paranoid when the lady told us to go to one up the road ‘I KNEW IT WAS A SCAM!! For once I was the cool calm one. We went to the next booth, headed back to the ladie and got all our money back, phew. All we had to pay was 40p each for the bikes, not bad at all.

The temples all looked very pretty lit up at night and the streets were aglow with fluorescent signs. Snack street was just round the corner from our hostel which had all sorts of snacks to try, but they were all minimum £1 so we didn’t want to get something and not like it. Craig got some cold noodles with unknown meat, a variety of sauces and spices and sprinkled with grated cucumber and nuts. I’ve been playing a Chinese translation app to food stalls and it asks if they have vegetarian food in Chinese, they usually point to what’s vego, if anything. I got some dumplings in a broth and they were impossible to pick up with a chopstick. They were so slippery and kept falling off and splashing me, I kept trying to copy the man opposite me but it was hopeless so I used the spoon provided for the soup to cut the dumplings into easier bite size pieces and my spoon snapped. I warned Craig that he’d be in for a long night waiting for me to finish up – but then I found some mince meat looking item amongst the green filling and it totally put me off. To make matters worse I fished out a baby prawn floating in the soup and Craig finished the rest of it off.

There were stalls selling sticks of insects, but not your average cockroach and crickets, this one had centipedes, huge spiders, snakes, seahorses, lizards and starfish. The stall next door knocked me up a great fried noodle dish on her wok and while I waited for it to be cooked I heard a loud crunch from behind me and a local was standing right next to me eating a big scorpion like it was just your average snack. 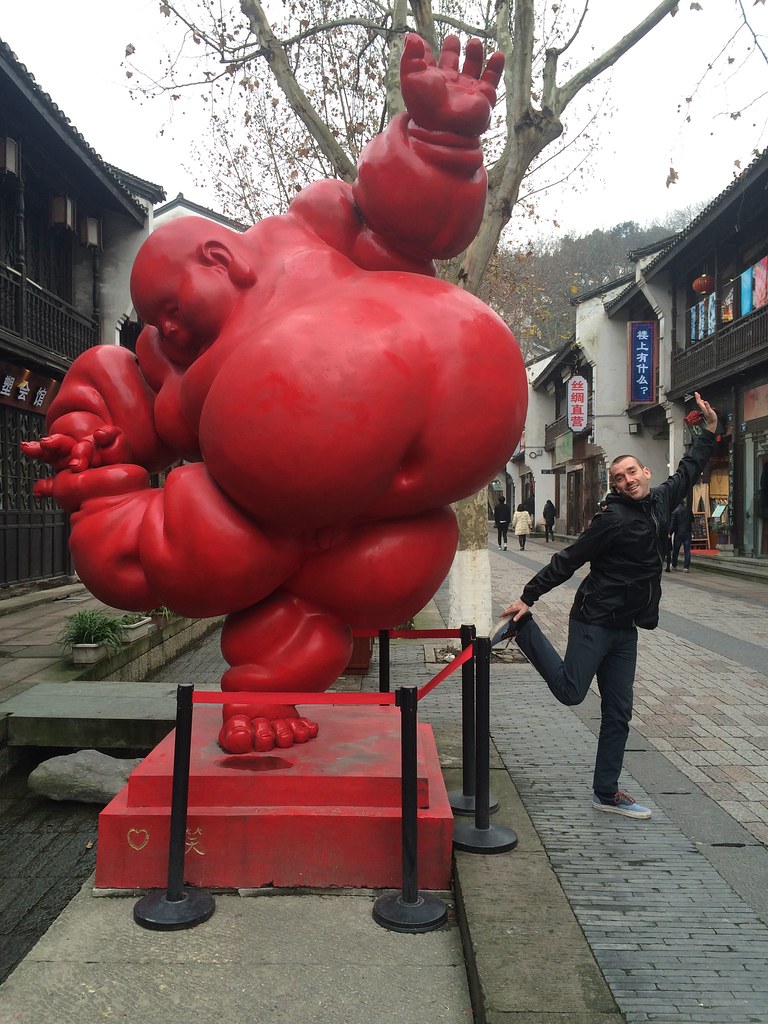 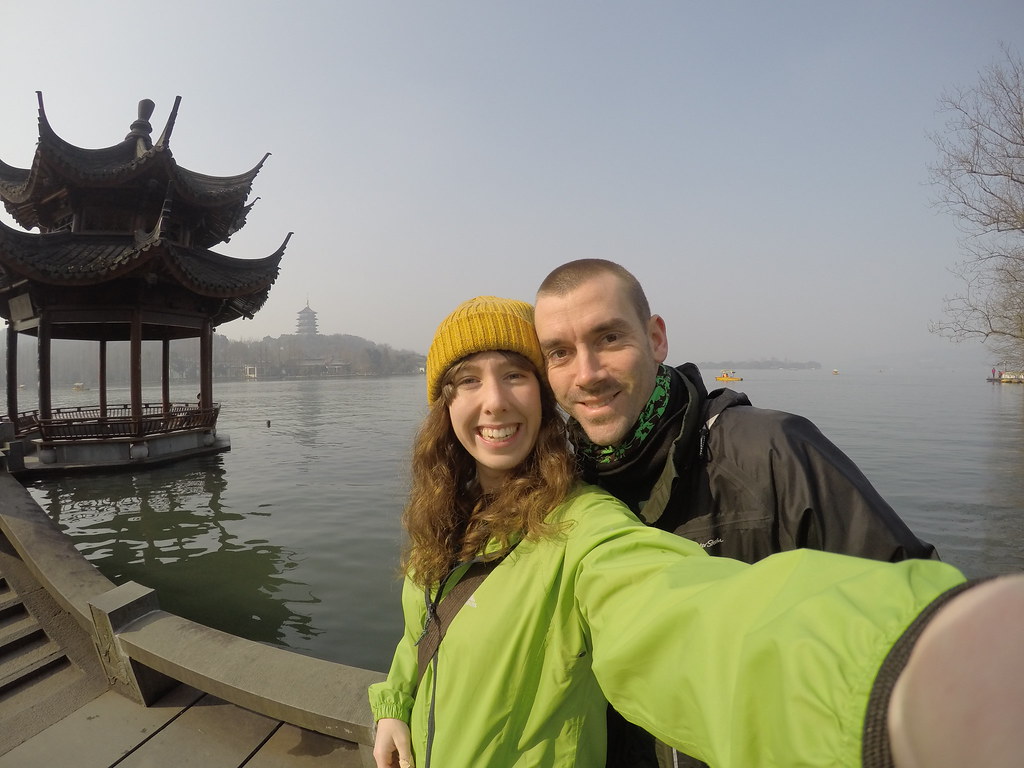 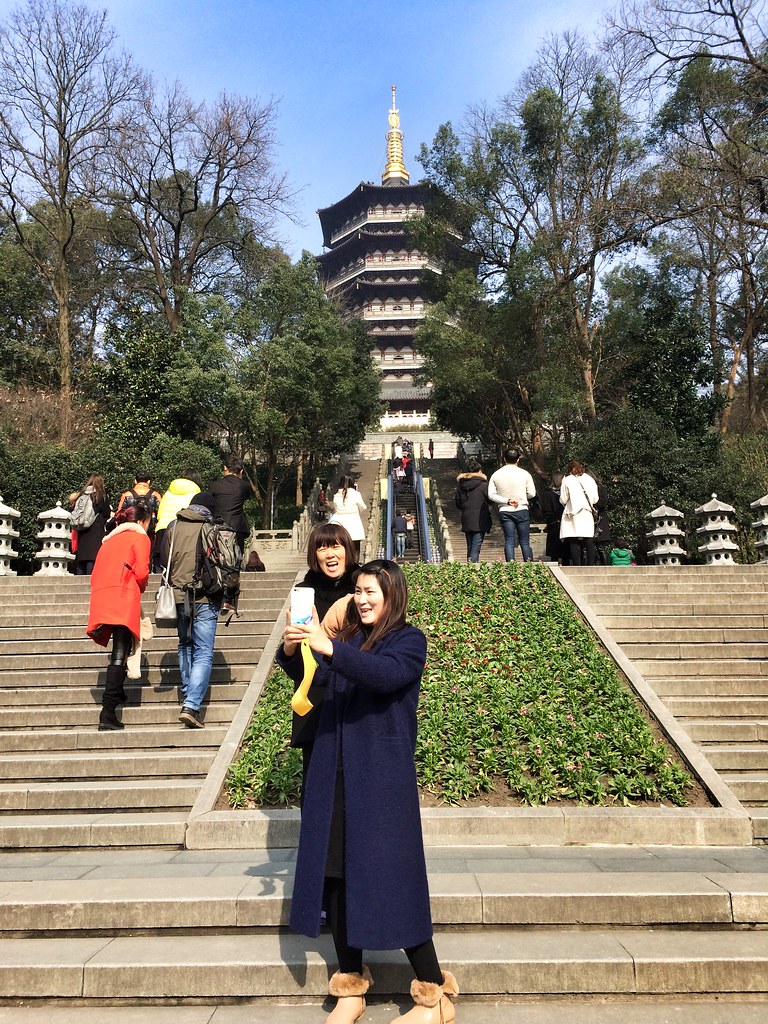 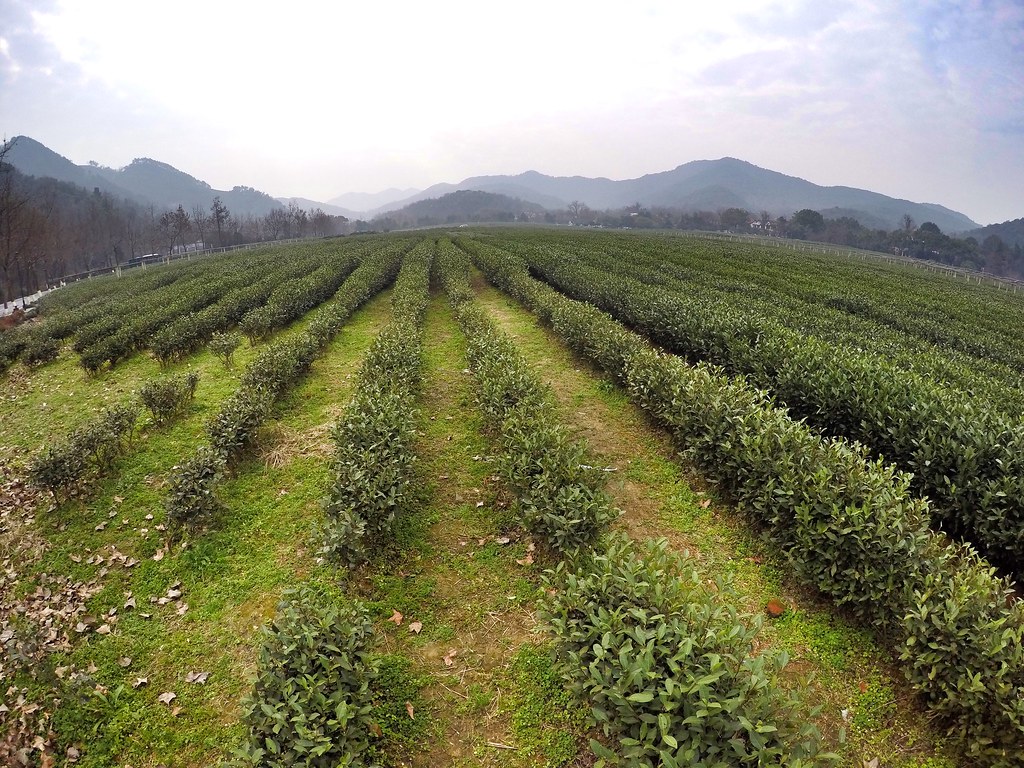 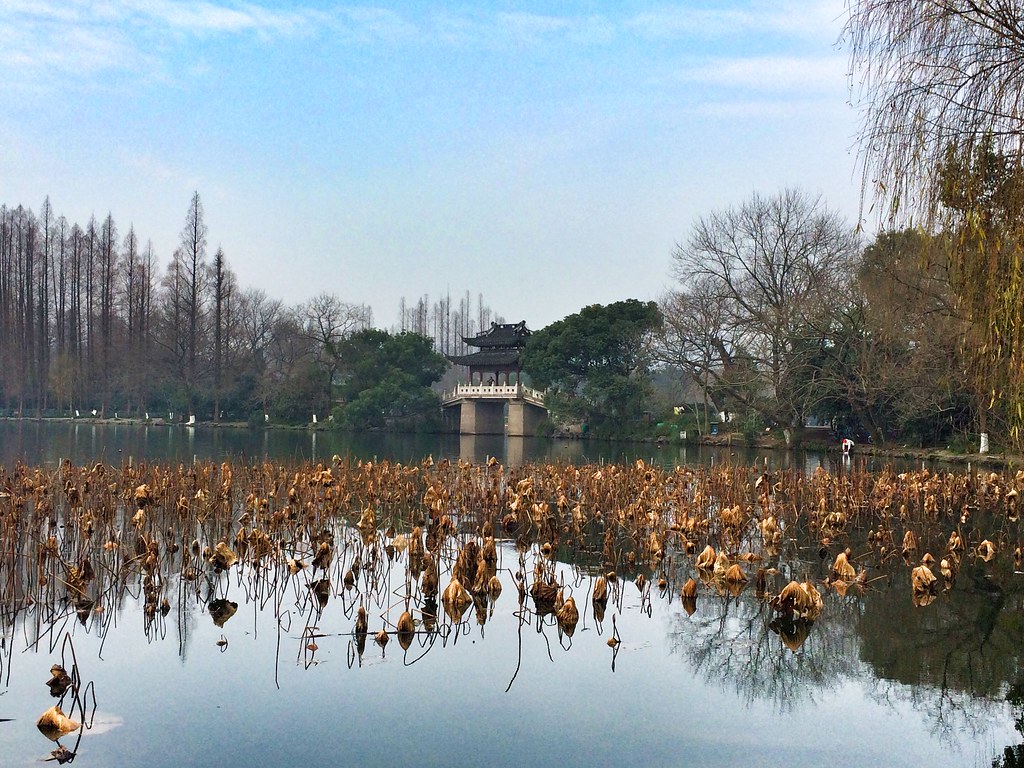 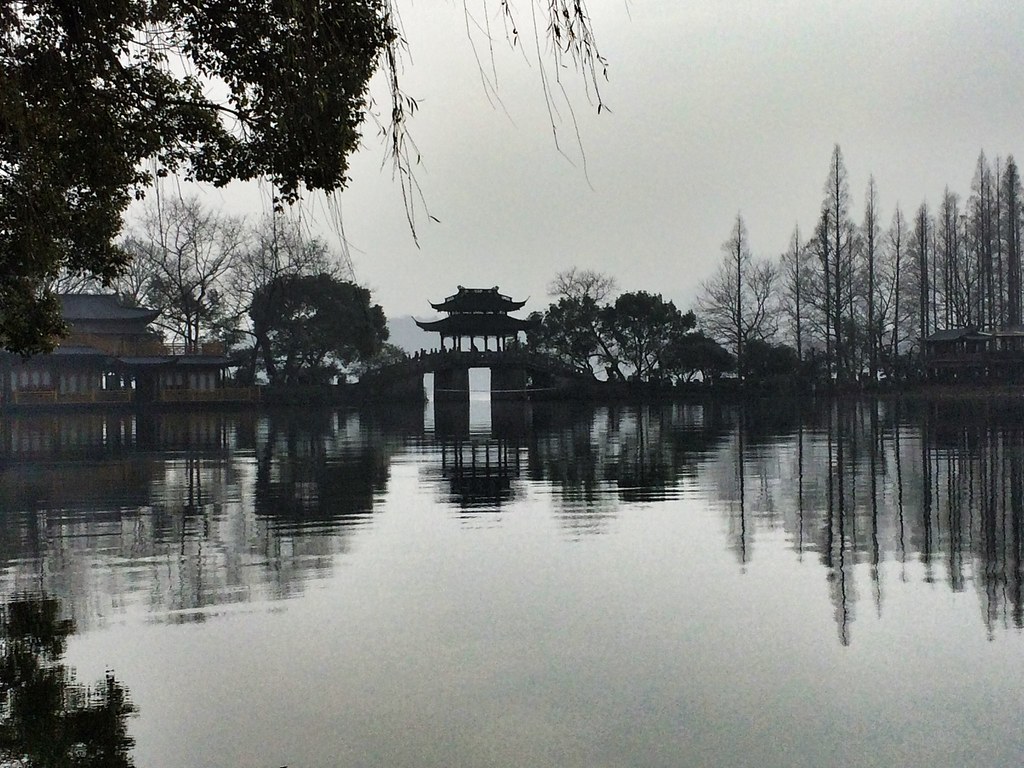 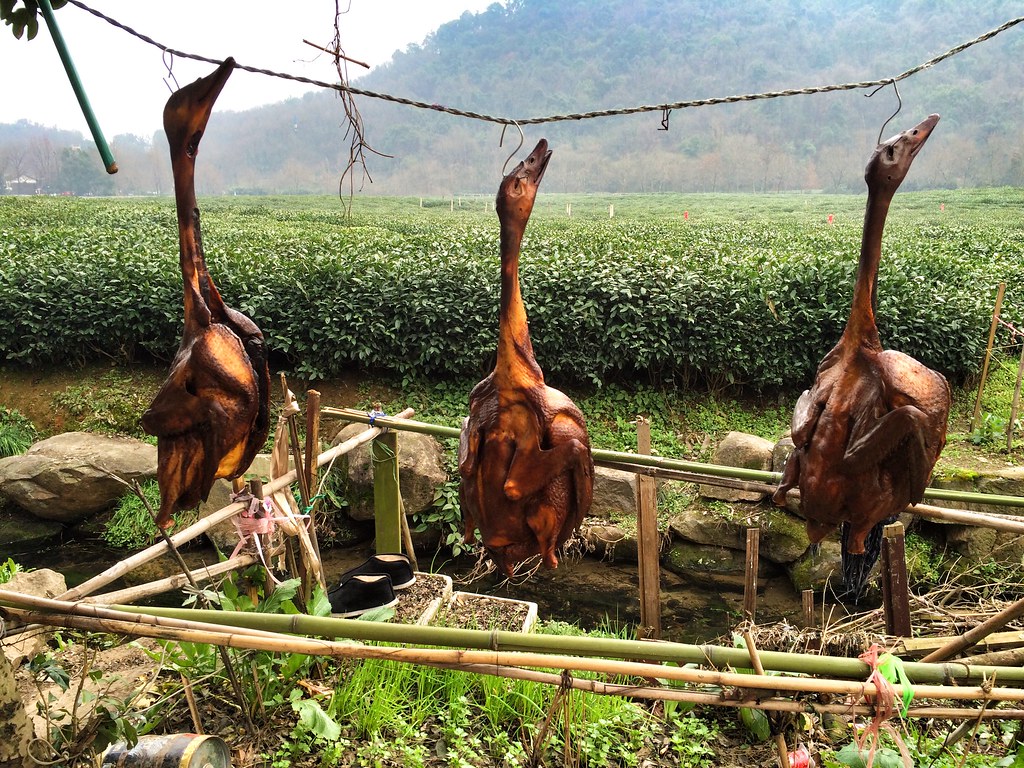