Driving around Zarnesti was a nightmare, it was Sunday market day, music was blasting out a speaker and men in matching hats were wasted by 11am in the pop up pubs. I loved it though, it reminded me of the markets in Central America, bustling with colour and culture. But, it meant certain roads were closed, we couldn’t find an info centre and alas couldn’t get any info on the nearby hikes. We managed to find and explore Zarnesti Gorge which was particularly impressive and steep. But we really wanted to get to a good viewpoint of the nearby 22km ridge line, or even up to it.

So, we hiked for 3 hours and got nowhere in particular. But the next day we woke and strolled just 10 minutes up a dirt road. It led to the top of a hill, surrounded by other hills, all neatly mowed with bright green pastures. Houses and barns dotted the slopes and dogs barked from every garden. The forested hills had an autumn tinge to them, and the whole surroundings were beautiful. The dogs were very intimidating though, so we shook stones in our hands like we’d been shown in the past – it never works for us though, they still bark and if they hadn’t been attached to a chain, they probably would of mauled us. I don’t have a good track record with stray dogs, no matter how hard I try to stay calm my heart beat becomes so intense it would probably make a reading on the Richter scale.

We had to drive back through the crazy roads of Zarnesti on our way south and it didn’t fail to stress us out. A drunk cyclist clumsily fell off his bike right into us – we missed hitting him by a few inches. On our way south we stopped at Bran to visit the popular castle. It sits atop a forested hill and was very impressive with orange spires and angled roofs. It’s become a national symbol of Romania and has been nicknamed ‘Dracula’s Castle’ after the fanged chap supposedly visited the castle once in the 15th century, just once, and it’s named Dracula’s goddam castle! There’s probably a Dracula’s corner shop, public loo and restaurant, all of which Dracula stopped at in his life of mischief.

The route south from Bran was really beautiful; it was a hilly, wiggly route up and down lush valleys. Every pullout had a local, selling colourful plum brandy and cheese. One lady was insistent that we buy some ‘cheese, CHEESE?’ ‘no thank you!’ we kept saying. Then she rammed a knife through our open window and on the tip of her weapon was a cheese taster. So we tried some and awkwardly smiled saying ‘yes, very nice but no thank you’. She was very disappointed after using a mix of intimidation and guilt tasting. We drove off and I said ‘well at least we got to try local cheese’. ‘Yup, wouldn’t try it again, it was rank!’

The hills were vibrant green and had huge dome shaped piles of hay. Everyone seemed to own some livestock, from scrawny turkeys and clucking chickens to dairy cows and Shetland ponies. We could see the high rocky mountains in the distance, and close by were rock formations and narrow gorges.

We took a minor road west which was in a bad way; it seemed to be made from slabs of concrete as opposed to a flat tarmac, so it was constantly bumpy. Then there were deep pot holes and cracks, it went on for ages and then a sign would appear saying ‘Bumpy 2km’ what the heck have we just been driving along then?

It was a very rural area and wonderfully peaceful so we started looking for a place to stay. We turned up a road and were met by a wall of goats and sheep. ‘Ah shit, turn back, quick we’re gonna mess up the migration!’ We managed to reverse back on the grass and let them pass. Hundreds of them came down the road towards us, some with bells dinging, others hopping with broken legs. We were very impressed with how well trained they were, listening to all the shepherds commands and whistles. They formed such a neat queue, about 10 abreast, and they all shimmied past us. It was hilarious! Pablo was surrounded by the animals. Once they’d crossed it all calmed down and a couple of the dogs hung around the road. They looked scrawny, and nervous of people and noises. But when it came to protecting their herd of animals, they turned ferocious and called all their other doggy friends to help. The main farmer dogs have a horizontal stick hanging from their neck, and each farmer seems to own the same variety of dogs; generally Dulux-Paint style dogs seem the most common, followed by a wolf like dog and collies. An old man was sitting atop a huge bed of hay on a horse drawn cart. The dogs were going berserk at the poor horse, it tried to hold its head high and proud as if their weren’t dogs snapping around it’s thin ankles. The man on the hay was trying to swat the dogs away with his hat. Boy, those dogs have a wild side!

We were greeted at dinner by a scatty looking dog, who we closed the door on. But he came back again in the morning and was excited to see us, his stumpy tail was wagging like mad. Craig succumbed and gave him a stroke. We named him Brian, he sat and ate our stale bread while we had breakfast. I liked Brian. 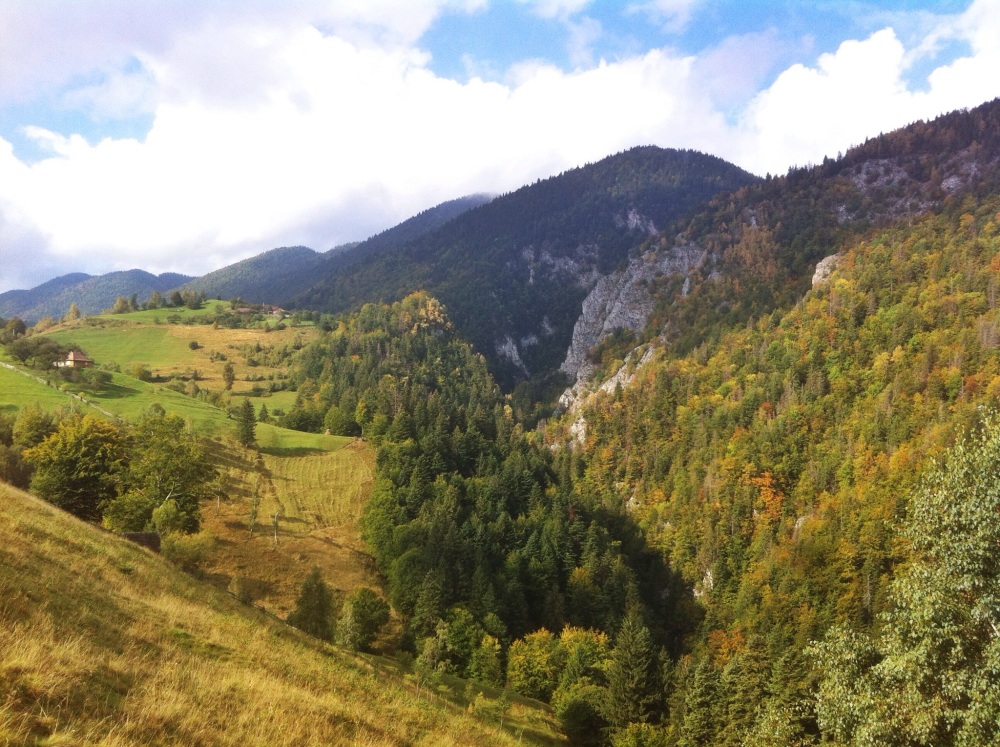 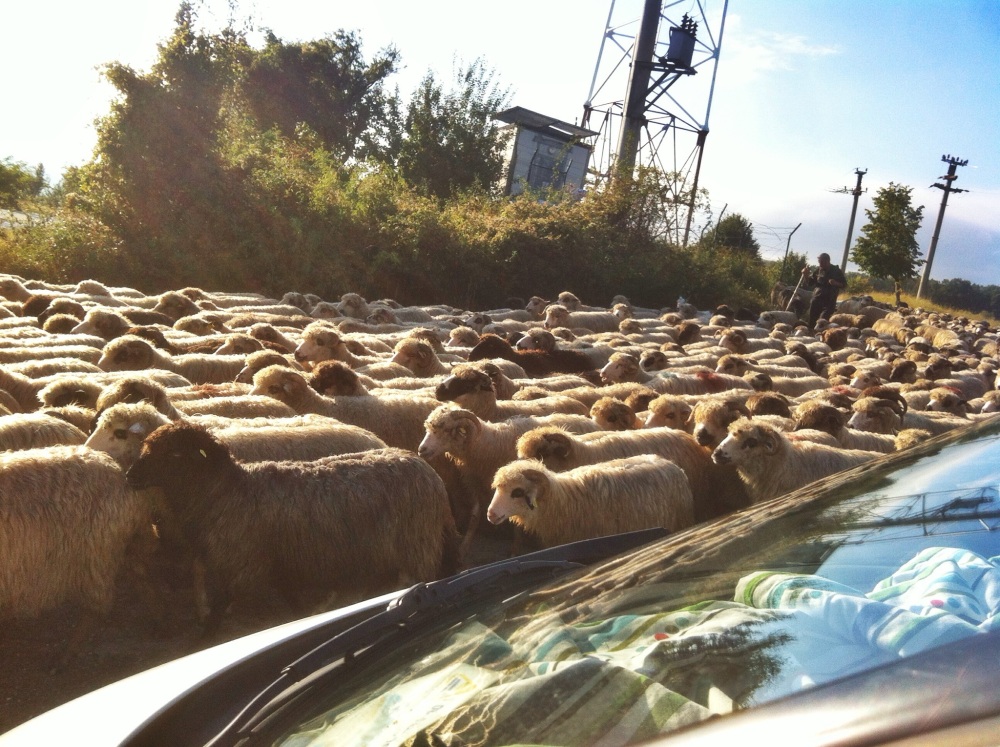 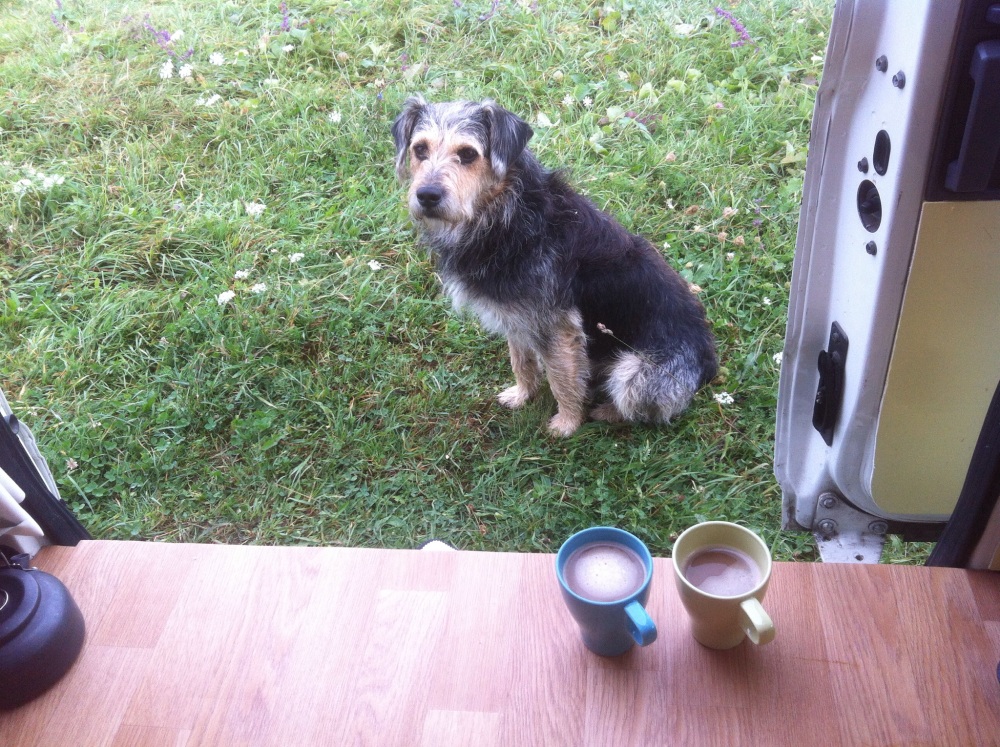