We wanted to make the most of the Carpathians so decided to drive the Transfagarasan route which is the 2nd highest mountain road in Romania and plies through the Fagaras Mountains. It started off really dramatic, we could see our road ahead of us curving around a sheer wall. It was like being back in the Himalayas but it was us in control, not a honking mad Indian. The route had a dull section of winding roads through forest but soon enough it started heading up to the 2034m pass.

As we went up, it began to rain, then the rain turned into snow. It was bitterly cold and a pick-up truck was driving along with a man standing on the back spreading grit over the road. We went through a tunnel and as we neared the end it was all misty, ‘whoa it’s really cloudy ahead Craig’. ‘Don’t be silly, that’s just mist inside Pablo from the heaters’. Then we were in the cloud, what can I say, women’s intuition! You could barely see 2m ahead and a few centimetres of snow had already set on the ground. The only way to see where the road went was by following the previous car tracks which were quickly being covered by more snow. The weather had turned so quickly, it was blizzard conditions and we didn’t have snow chains or winter tyres, so down seemed the best option. Craig did a couple of break tests and we skidded, ‘let’s get outta here!’ We were both a bit annoyed as we wanted to stay at the top, visit Balea Lake and do a hike but it would be stupid to stay up there. So we continued down the zig zags till the snow turned back to rain and decided to wait it out and stay the night in the hope of good weather tomorrow. Soon enough the weather followed us down, we were engulfed in a huge cloud. Hail lashed diagonally and then we were in the heart of the storm. Flashes of lightning struck close to us and thunder rumbled from above. So we went down again, which led us through a section of snowy road, past huge boulders that had fallen in rock slides and eventually below the cloud and away from mother natures wild side.

It was a bitterly cold night, I couldn’t even bare to swish the icy water round my mouth after brushing my teeth. We had hot water bottles which helped, but it was still uncomfortable. It was still cloudy but not low lying like the day before so we started driving back up the mountain. We passed the area where we had originally pulled over to stay, it was covered in snow. Then a bunch of bikers were blocking the road saying they’d heard the road was too bad ahead. We decided to give it a go anyway. There wasn’t much tarmac to drive along, just a section in the middle where cars had passed, the sides were covered in slush, black ice and big clumps of snow. We could actually see what we’d missed in the clouds yesterday and the road was amazing, winding it’s way up along mountain ledges and bridges. Around half way up it got really slushy and slippery, a car was parked on a bend and after looking closer we realised is was impossible to park there, which meant he’d slid across and was stuck down a 2ft ledge, lucky he didn’t keep sliding of the bloody cliff. We decided to head back down, it was too slippery and options for 3 point turns were limited so we took that one while we could and drove back down to sit and ponder what we should do. It seemed silly to go up if it was cloudy up there, but we both wanted to see it all covered in fresh powder. Then a snow plough went past and we started whooping at them and decided it was a sign and followed them up.

Minus the cloud, the scenery was incredible and all the mountains were covered in snow. As we neared the top it seemed the snow plough gave up and went home. We took it slowly up all the zig zags. Rock walls were covered entirely in ice and sharp, dagger like icicles. Eventually we made it back up to the pass. It was a lot clearer than the day before, but there was no chance of hiking as you’d get lost in the cloud and it was soooo cold. It must’ve been well below zero. We quickly saw Lake Balea which was dark and uninviting and quickly headed back down (again!).

As we went down the weather seemed to be clearing, for christ sake, make your mind up weather! We got some nice views heading back down the mountains, the wicked road with its multiple ‘S’ bends and the forested valley below. It was an amazing road to drive, just as exciting as the ones we drove in Norway. It’s a shame we didn’t get crisp mountain views like we’d hoped, but hell, I didn’t expect to be driving through snow in Romania so it was a unique experience for us and the road could close any day from now due to weather conditions.

As we drove down the mountain we gradually shed our clothing, off with the hat, the thick jumper, the wooly socks and the long johns. It was a clear blue day down in the lowlands and we could see the mountains were still cloudy behind us. We drove into Sibiu which was a very pretty city with 3 neat squares. Cobbled lanes led us past old buildings with painted shutters. The roofs of most of the buildings were terracotta tiles with little curved sections for small windows, usually two of them, so it made the houses look like people staring at you through squinted eyes.

We treated ourselves to lunch in a rather swanky joint that had rather cheap pizzas. When we stepped out the restaurant our jaws dropped, the clouds had completely vanished from the mountains and there was a perfect line of snow capped peaks. They looked beautiful! So then we couldn’t decide what to do, the info centre was useless at advising us on places to hike with views so we started considering driving back up the pass, for a fourth time! No! I don’t think I could bare another cold night and I could see us going up and it clouding over again and spending our lives up that inhospitable place waiting for the perfect view.

So we left it, and continued west as we’d originally planned. Flocks of birds were performing quite a show for us as they did synchronised flying like a huge plague swarming in the sky. After the show we took a detour, much to my excitement, to the little village of Cunta….yes, I said Cunta. 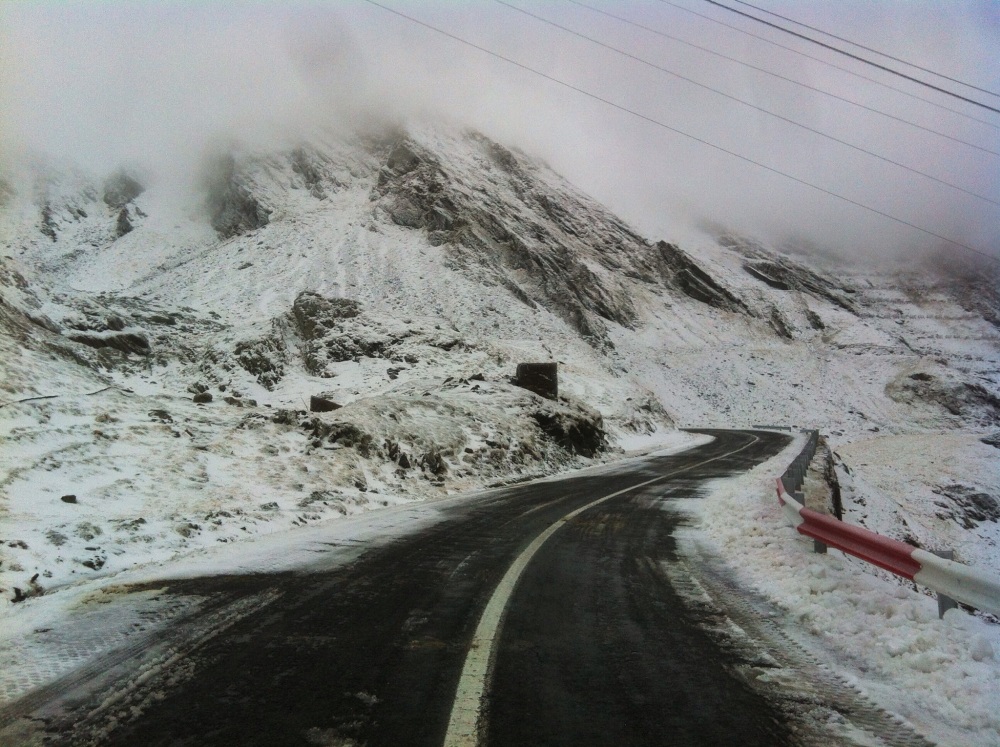 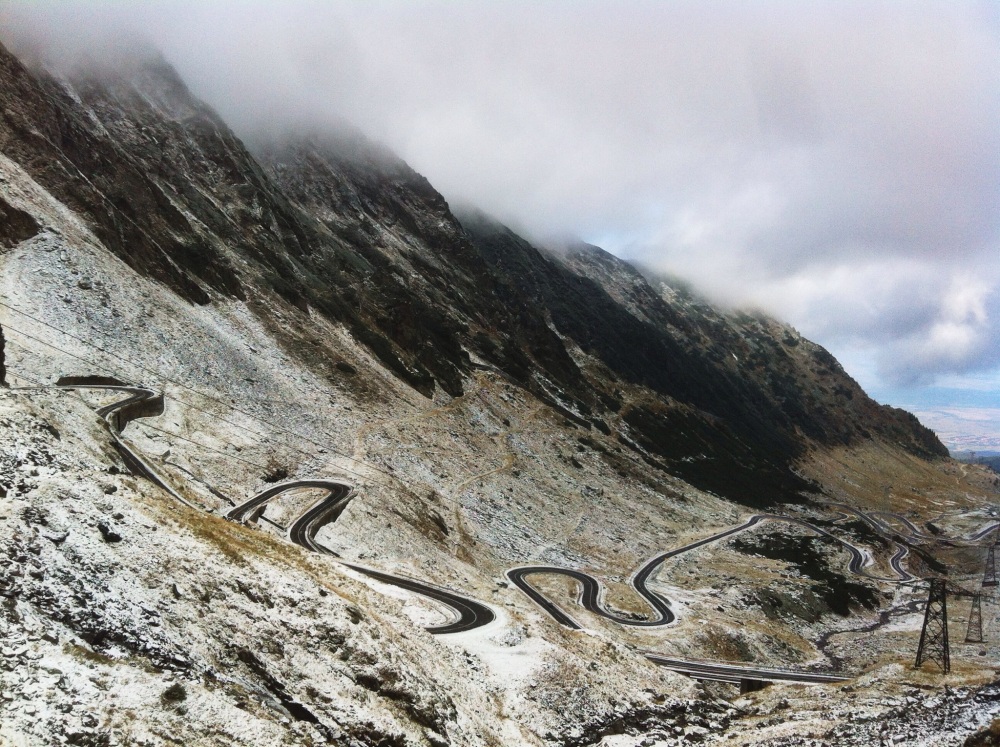 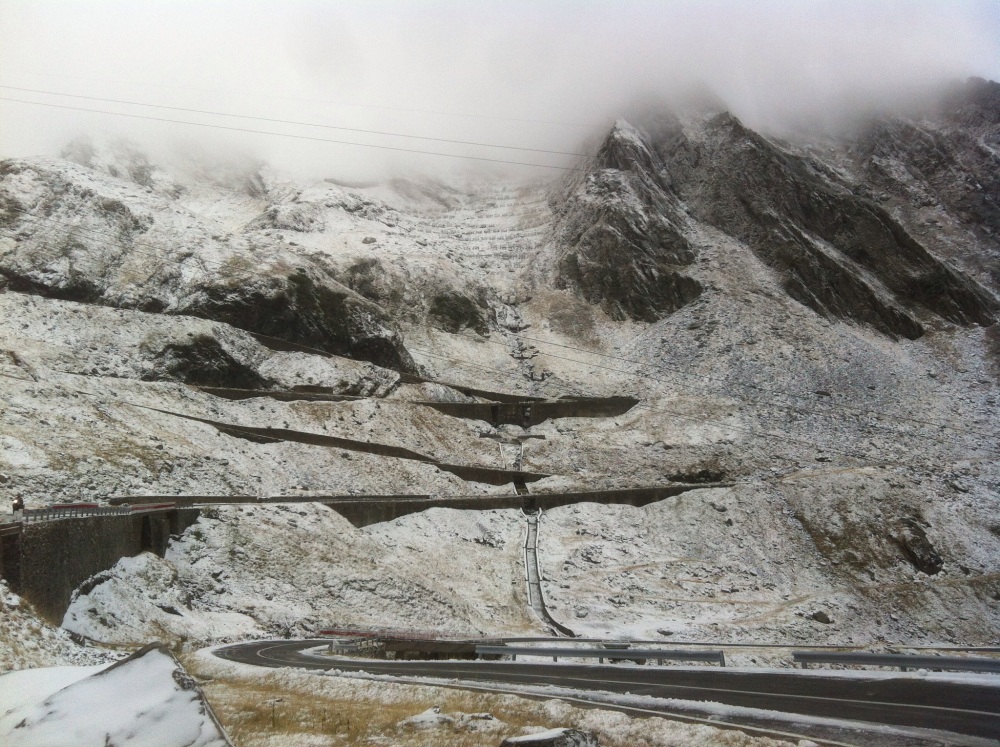 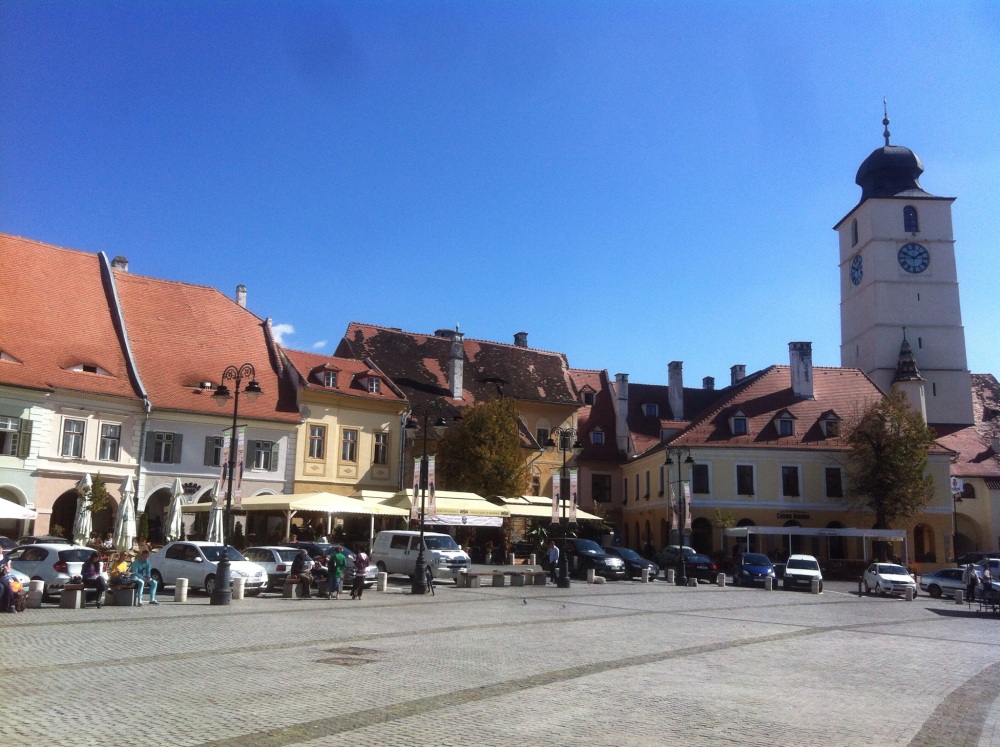