Hualien sits on the east coast of Taiwan, set on the shores of the bright blue pacific ocean and backed by forested mountains. Just an hour bus ride away is Taroko Gorge, a place high on my list for Taiwan. We arrived in Hualien by train and took our first afternoon easy with a stroll to the local market to see the ‘grandmas and grandpas’ as our host described. She was right, each stall had a cute grey haired oldie sat behind it or a group of them having a chin wag. They put a lot of effort into their displays and the fish was beautifully presented…although I’d much rather if they were still swimming in the sea. A really loud fighter jet flew above us, followed by two more and they actually flew past a few more times that evening, I have no idea what they were doing but it felt like we were in the Hunger Games. 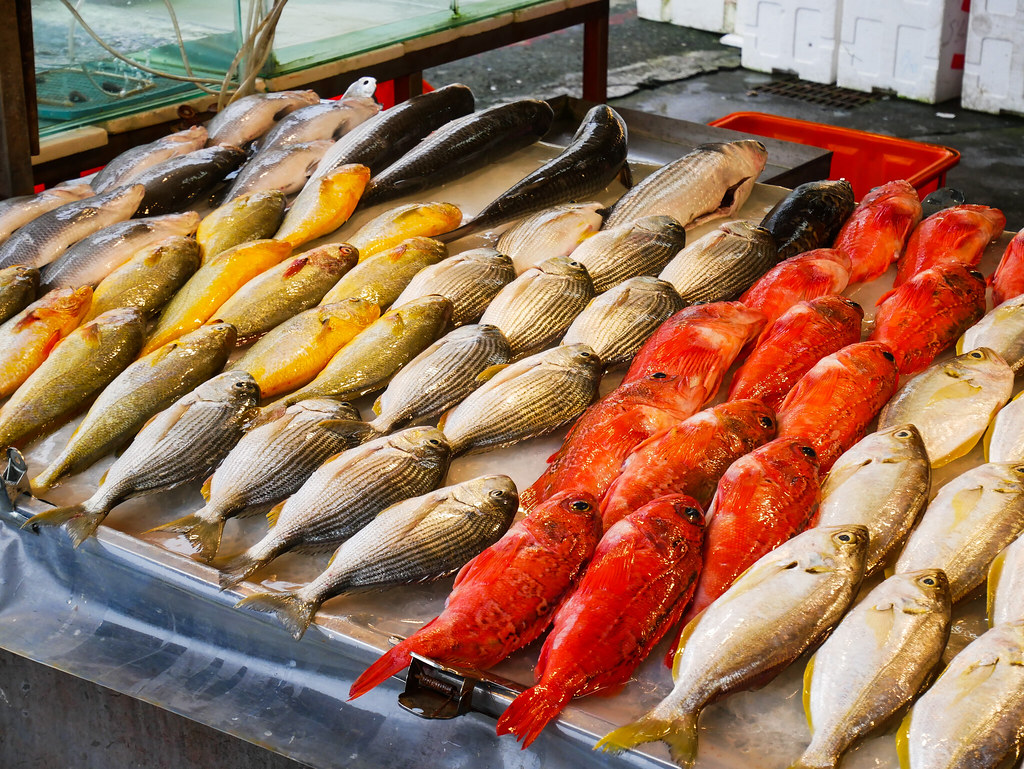 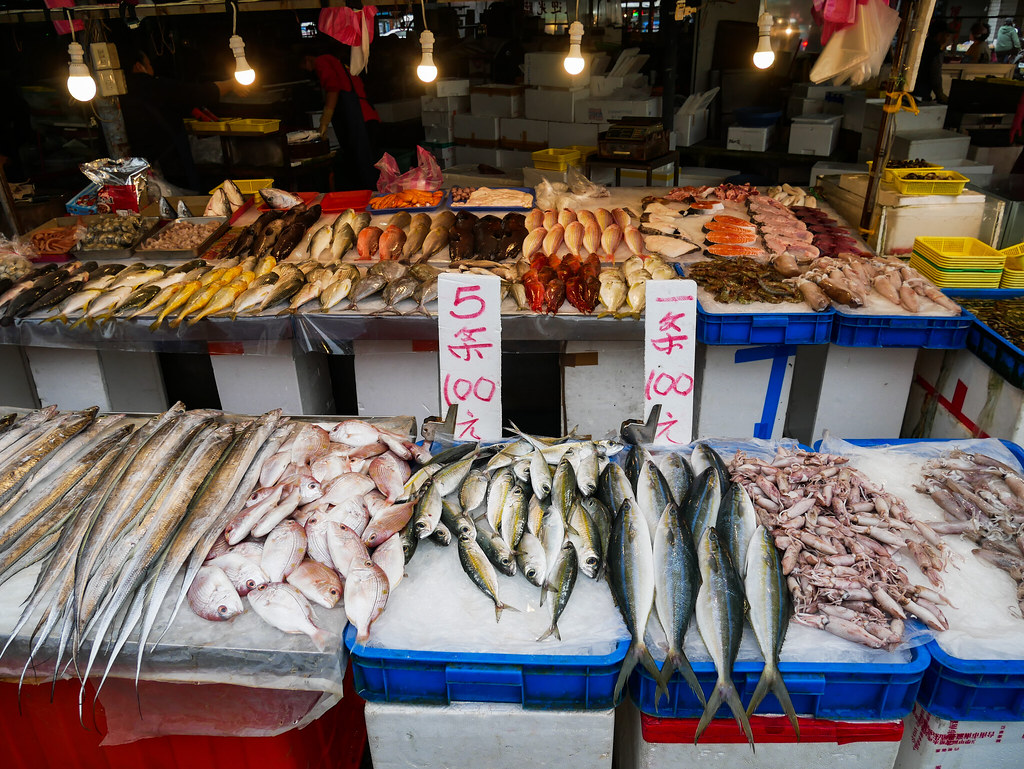 The following day we set off super early on the first bus at 6:30am to Taroko as I’d read the park can get extremely busy with tour buses. We’d only had grey, drizzly weather in Taiwan so we were delighted to wake to blue skies! It was also a lovely that there was actually a bus service that could take us into the national park and we could get on and off at different trail heads…although it took some planning as it wasn’t a very regular service. The first hike we picked was Shakadang, a flat trail that led us through a stunning gorge where the river running through it was a fabulous blue colour. The trail was quite high up and the river was way below us so at times it was hard to get a good view as trees and bushes blocked the way. A well-made path led us through the jungle and it almost felt like we were walking through a section of fancy botanical gardens with all sorts of exotic plants and butterflies dancing through the air. We passed the Truko tribal village and while you’re not allowed to enter their reservation they do sell traditional indigenous food at stalls along the trail. The indigenous people of Taiwan are closely related to the one’s in Polynesia, Micronesia, South East Asia and Madagascar. I’m not sure if this tradition still happens today but I read the women in this tribe have a big V-shaped tattoo across their face. 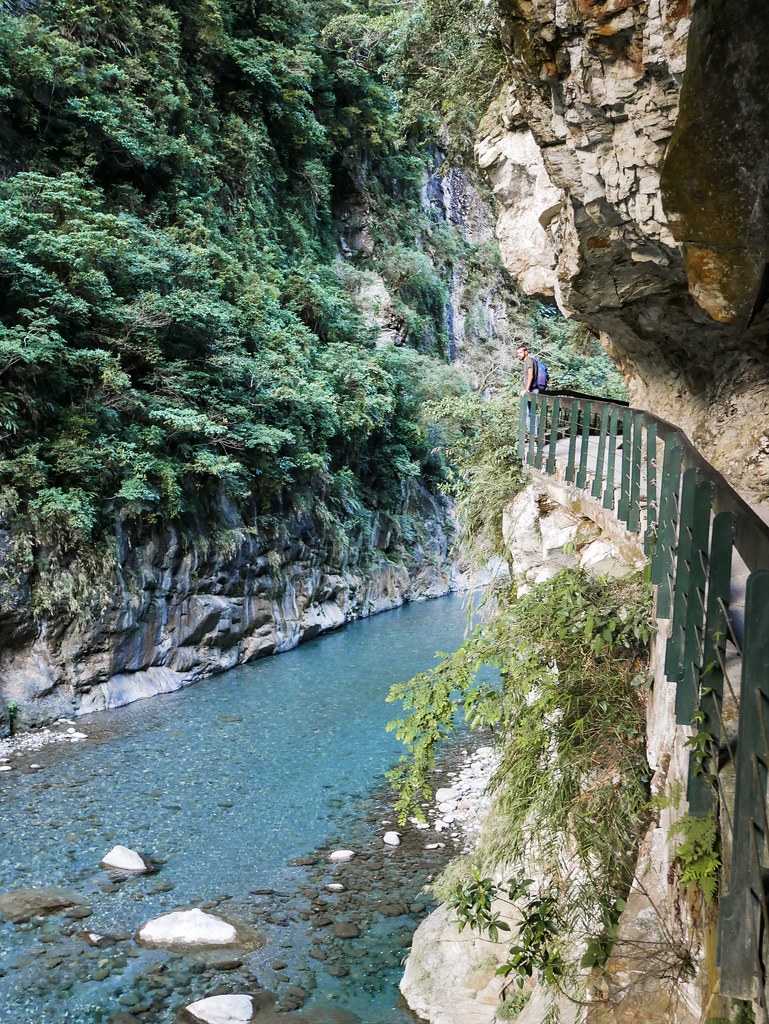 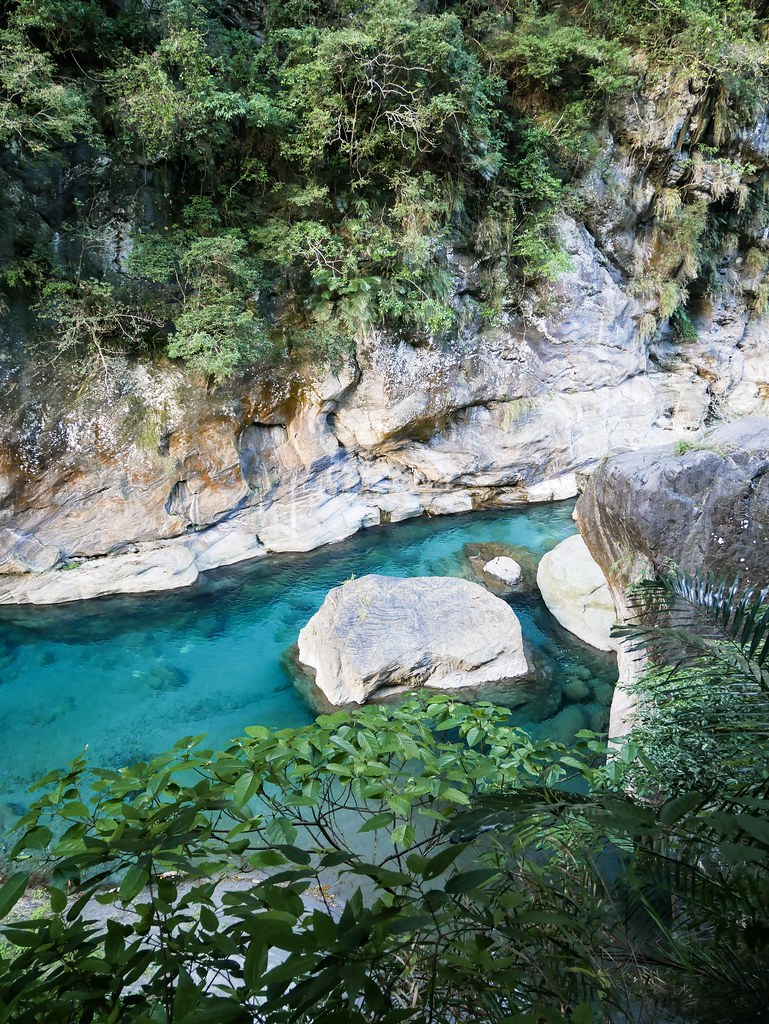 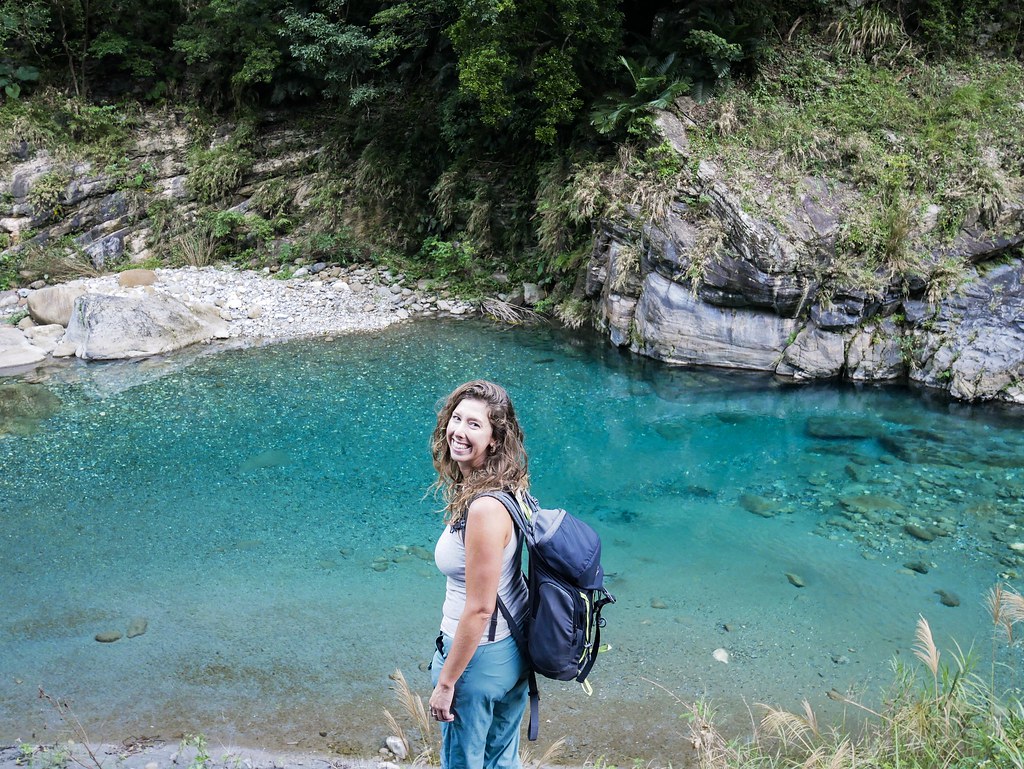 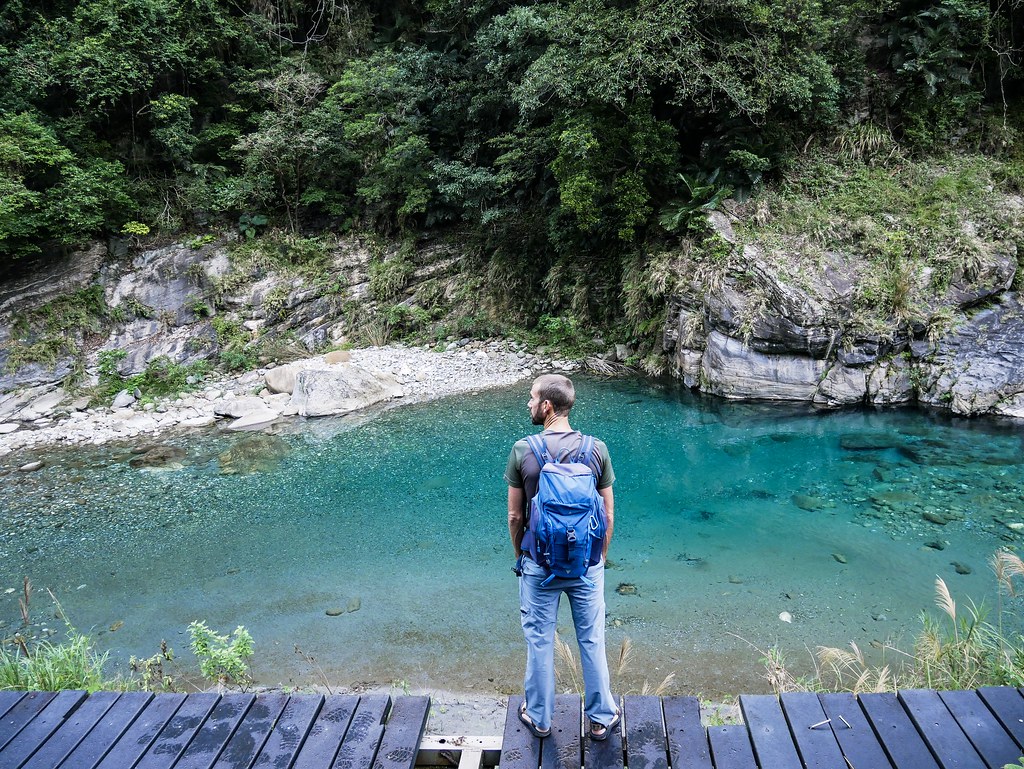 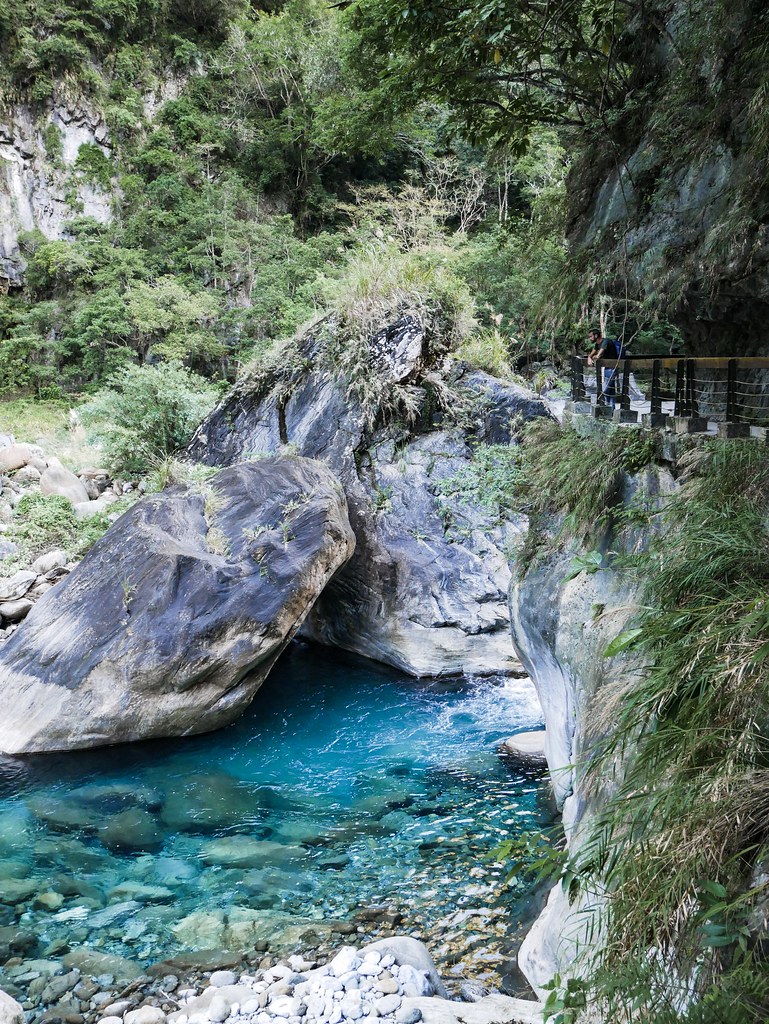 We followed the trail for 4km and then returned back the same way and after a very peaceful hour we started meeting people just beginning their hike. It wasn’t busy though and the sun was now shining on the pools, accentuating the bright blue colour, particularly at the end of the trail where there was a big crystal pool twinkling below us. We were a little shocked to see 5 buses pulling up and unloading hundreds of school kids, so we timed that hike very well! 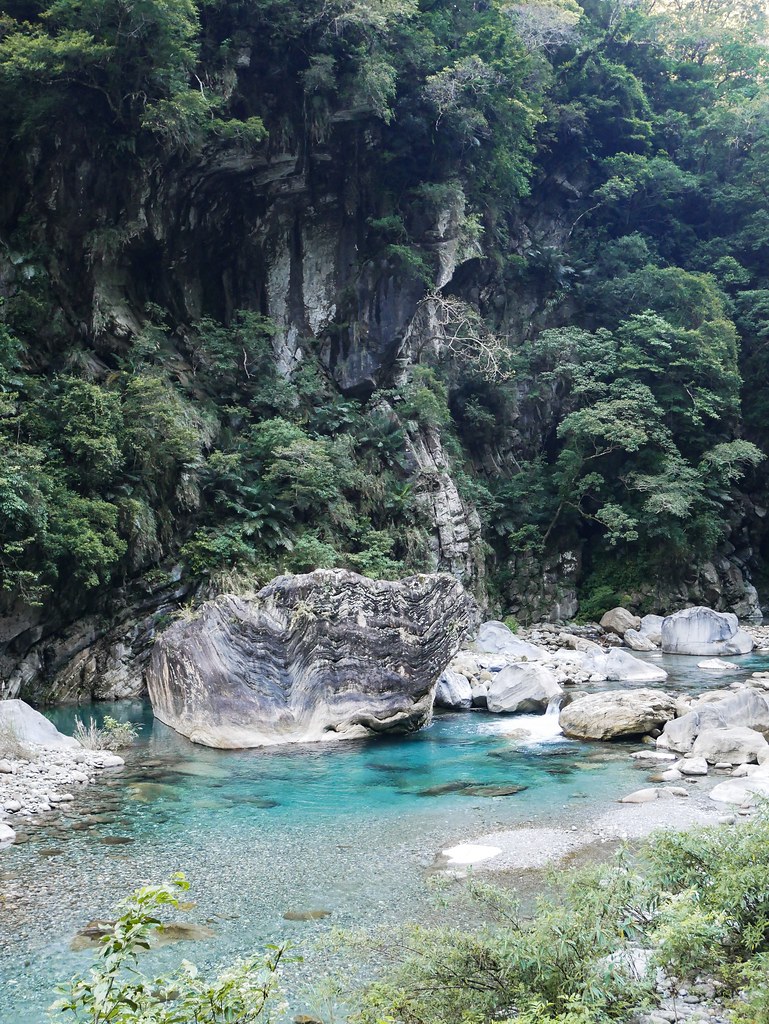 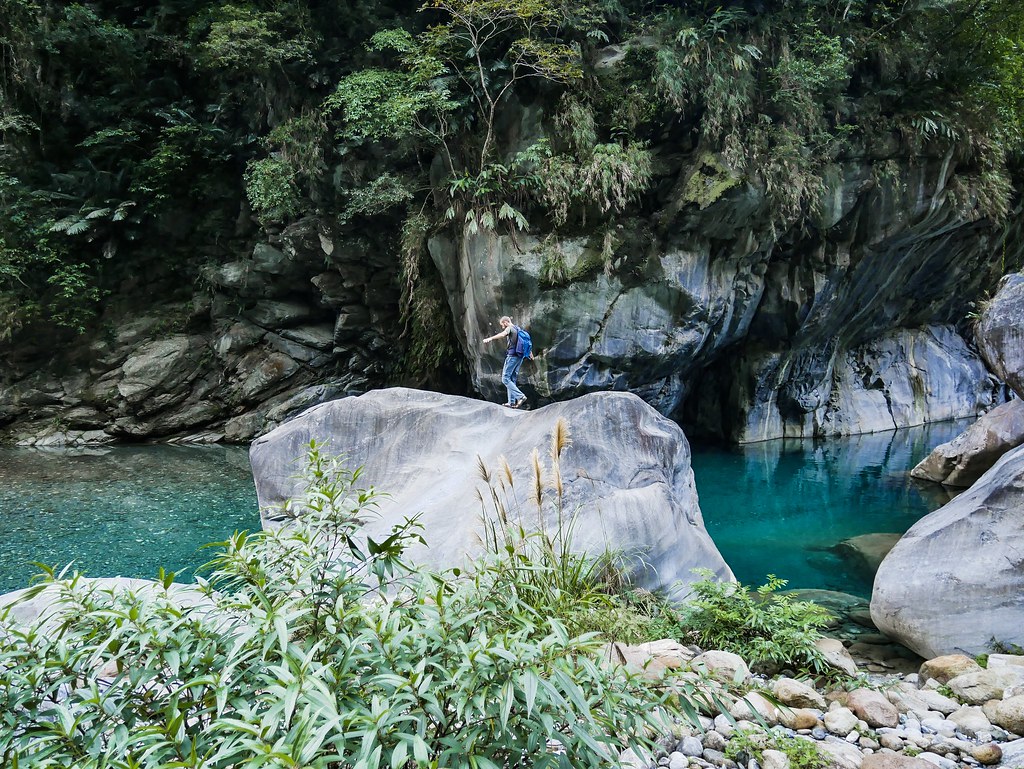 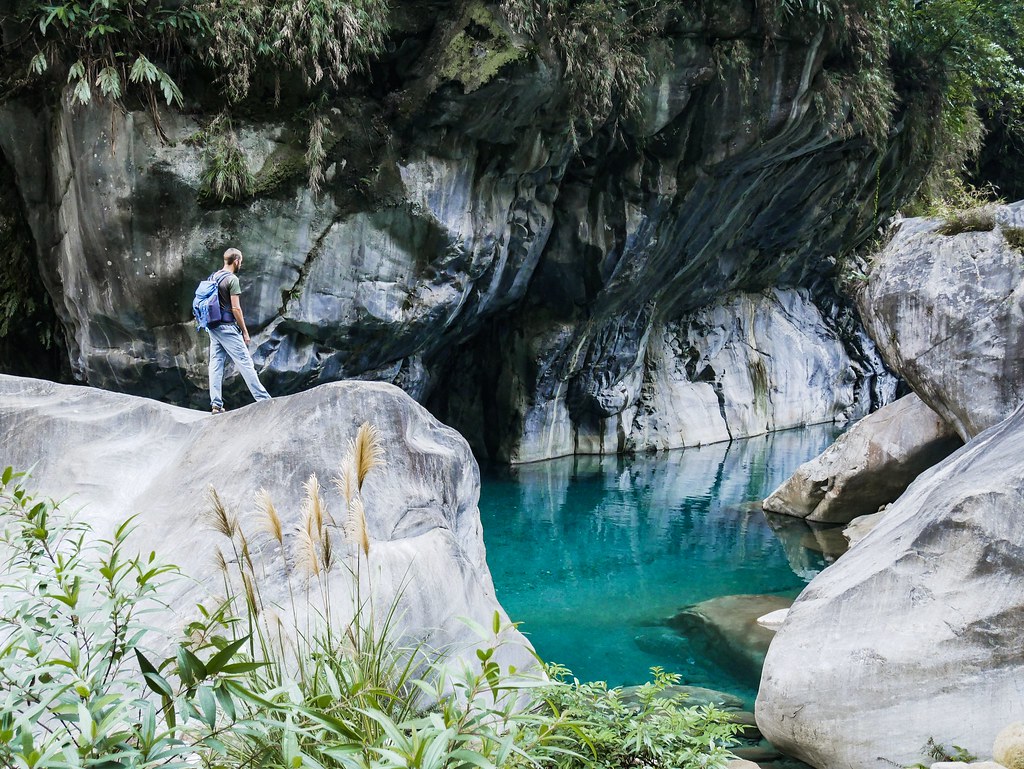 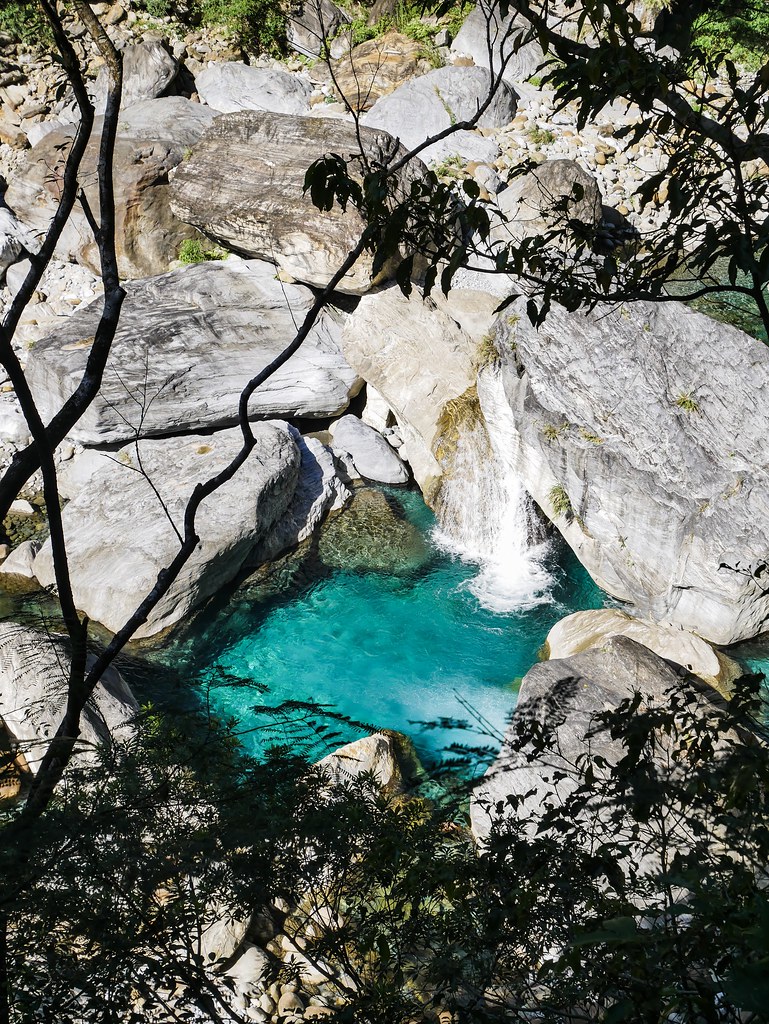 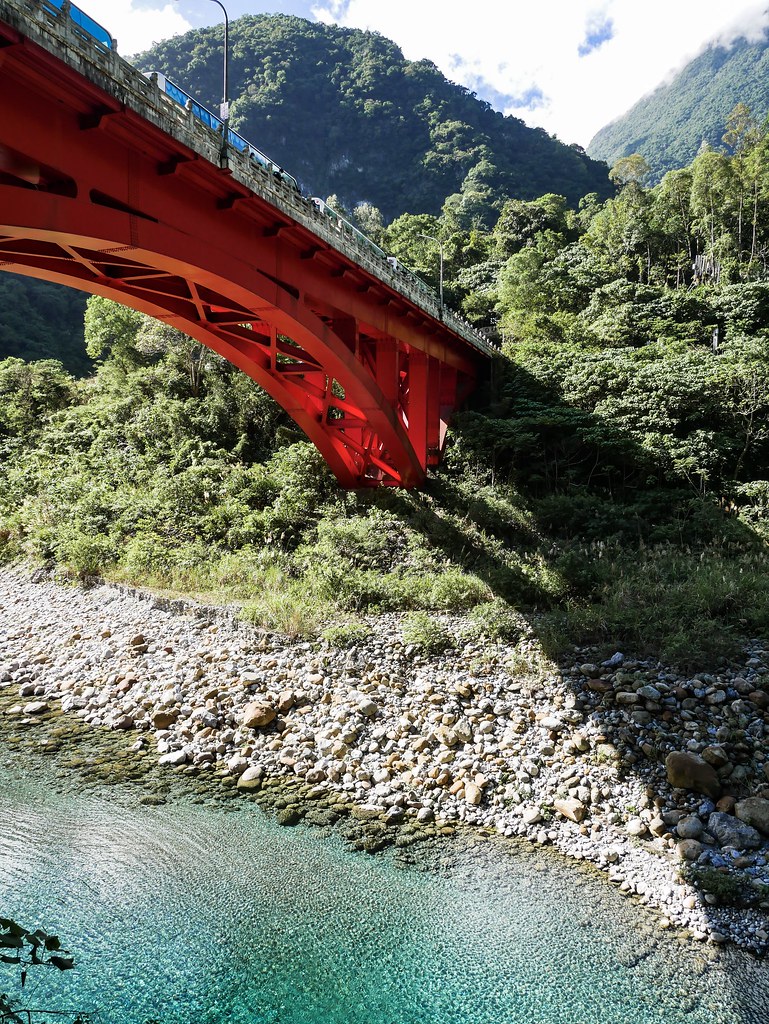 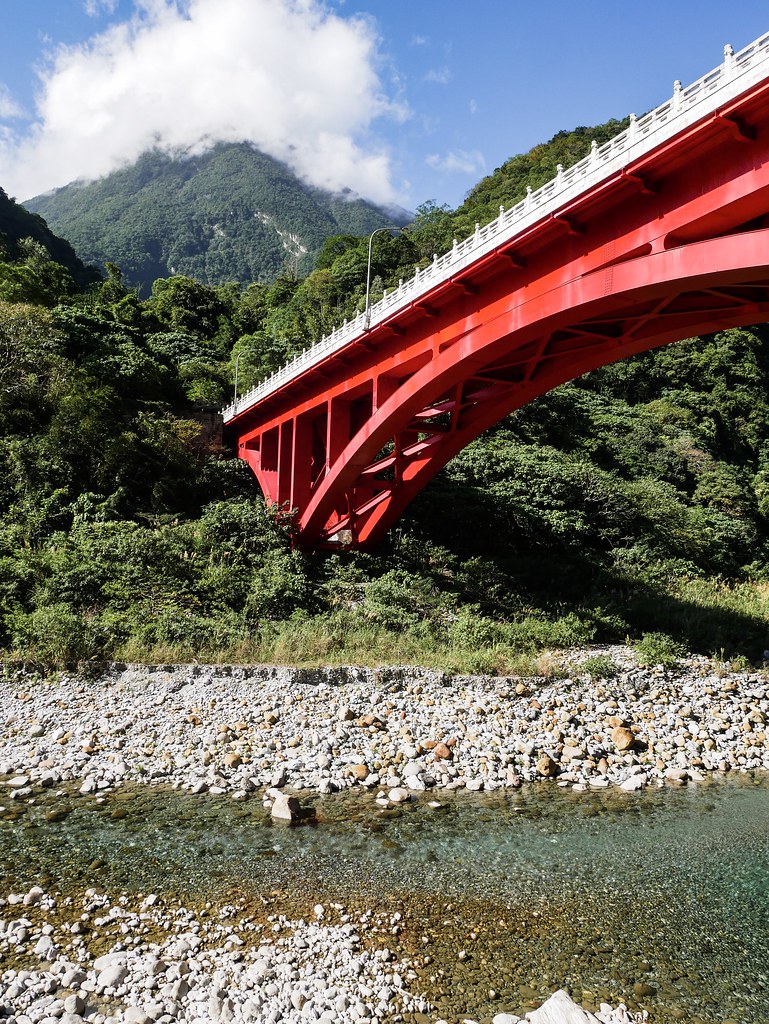 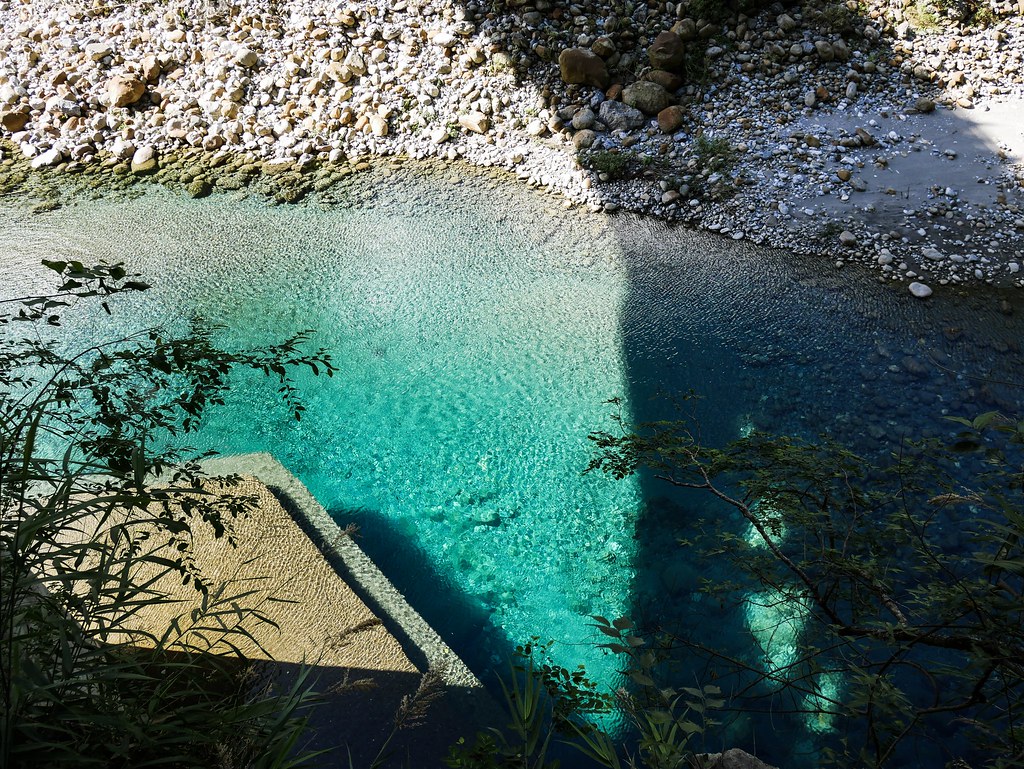 Our next stop of the day was a walk to the Eternal Springs, we followed the road to get there which was being freshly laid with tarmac, the workers tried to tell us to be carful as we had to walk right under an overhanging rock. One guy said go to the right and the other said stick to the left so that wasn’t very helpful and we opted for a brisk walk through the middle. We followed an uphill trail to the ChanGuang Temple, which wasn’t that impressive up close, it looked quite newly built like a fancy Chinese restaurant if I’m honest but it looked better as we continued uphill and got a view of it’s dramatic location, nestled on a forested slope on the edge of the valley and surrounded by steep green mountains. 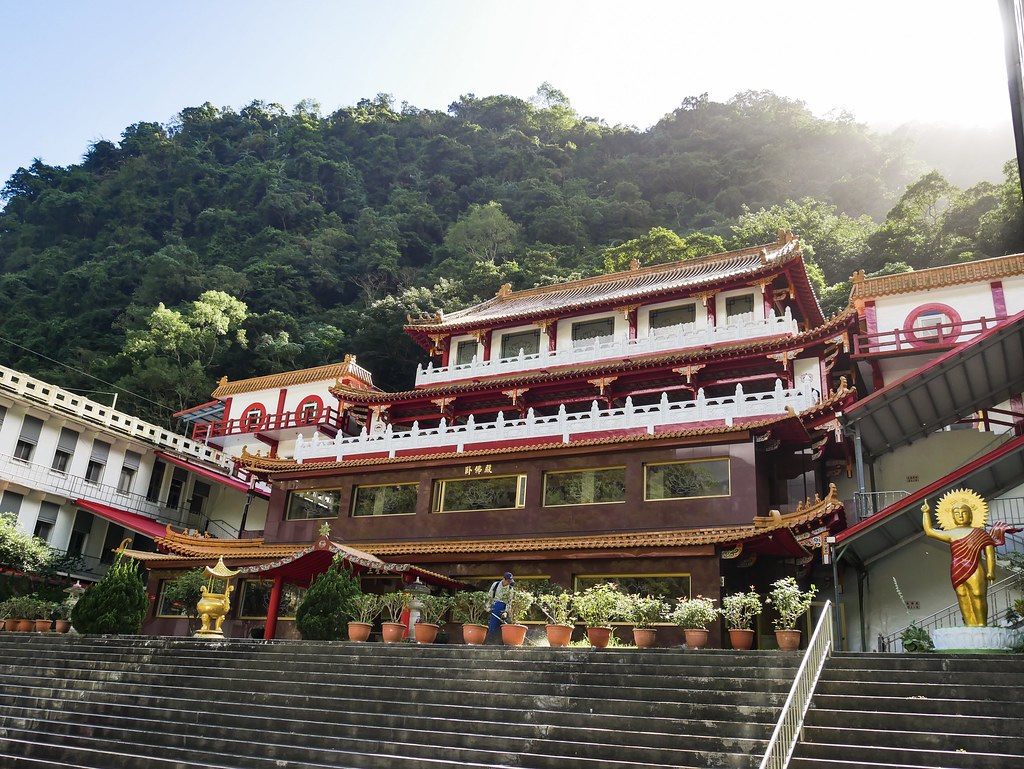 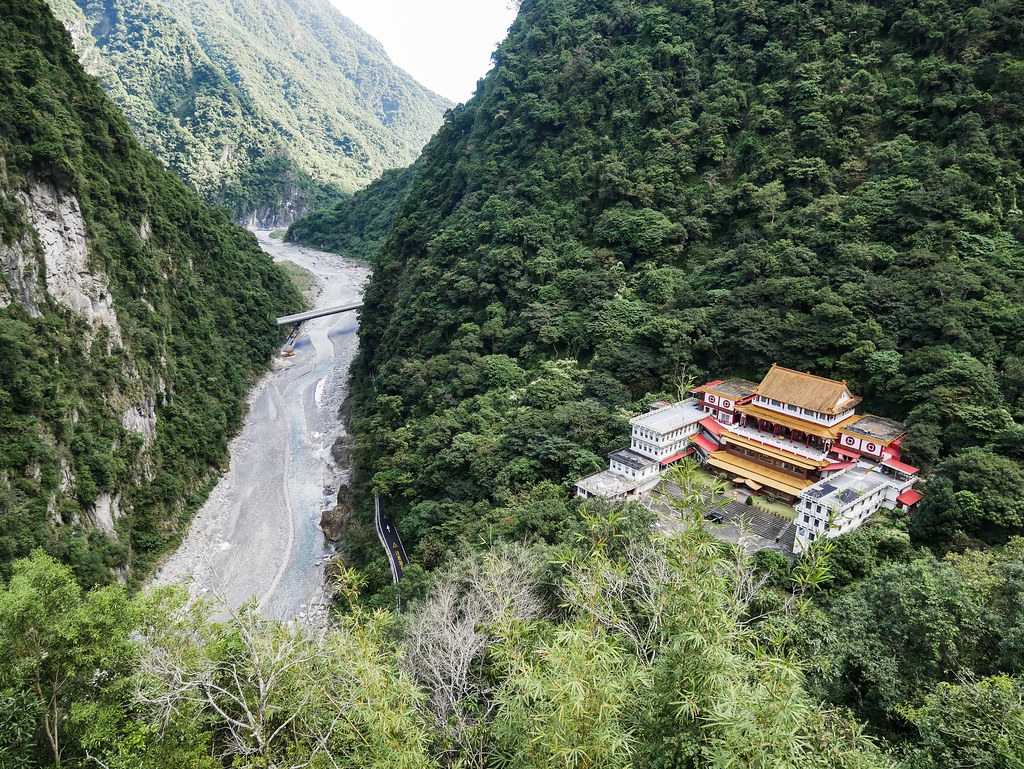 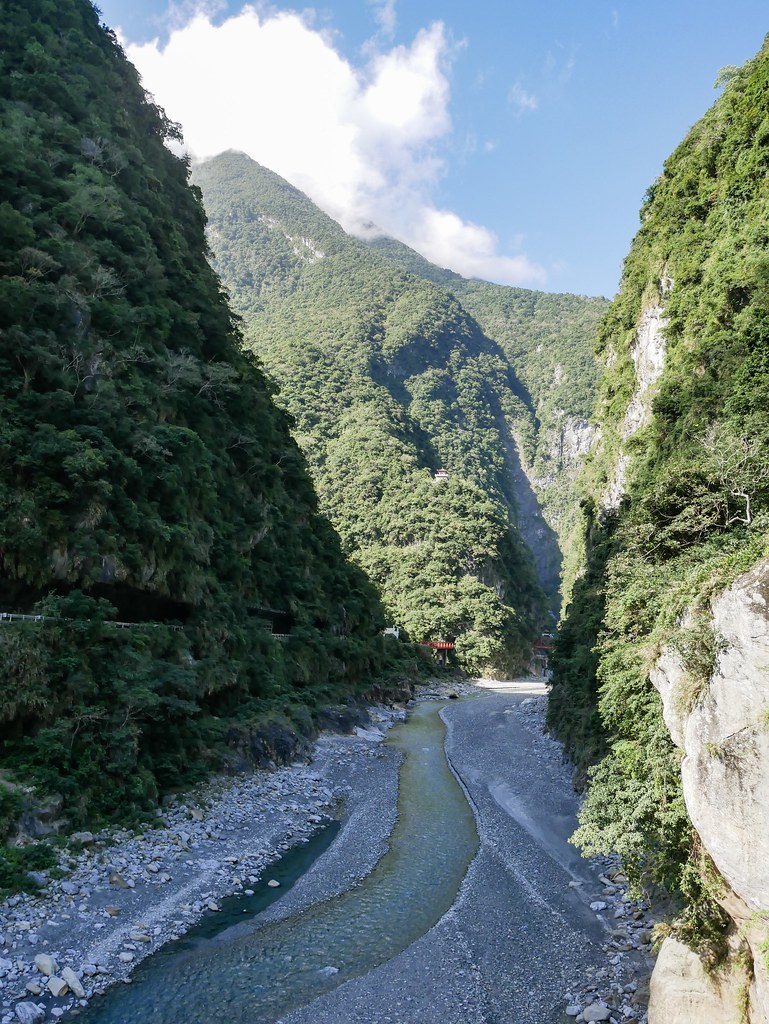 The trail was partly closed so we ended at a beautiful red shrine high above the valley. Craig pulled a rope so the huge bell in the middle of the shrine began loudly dinging and we sat on the terrace for a picnic lunch whilst trying to avoid the hornets that kept buzzing past us. We continued back down to the Eternal Spring which was built to commemorate the 212 veterans who died while building the road through Taroko Gorge in the 50s. Just as we were leaving the school buses pulled up so we managed to avoid the crowds yet again. 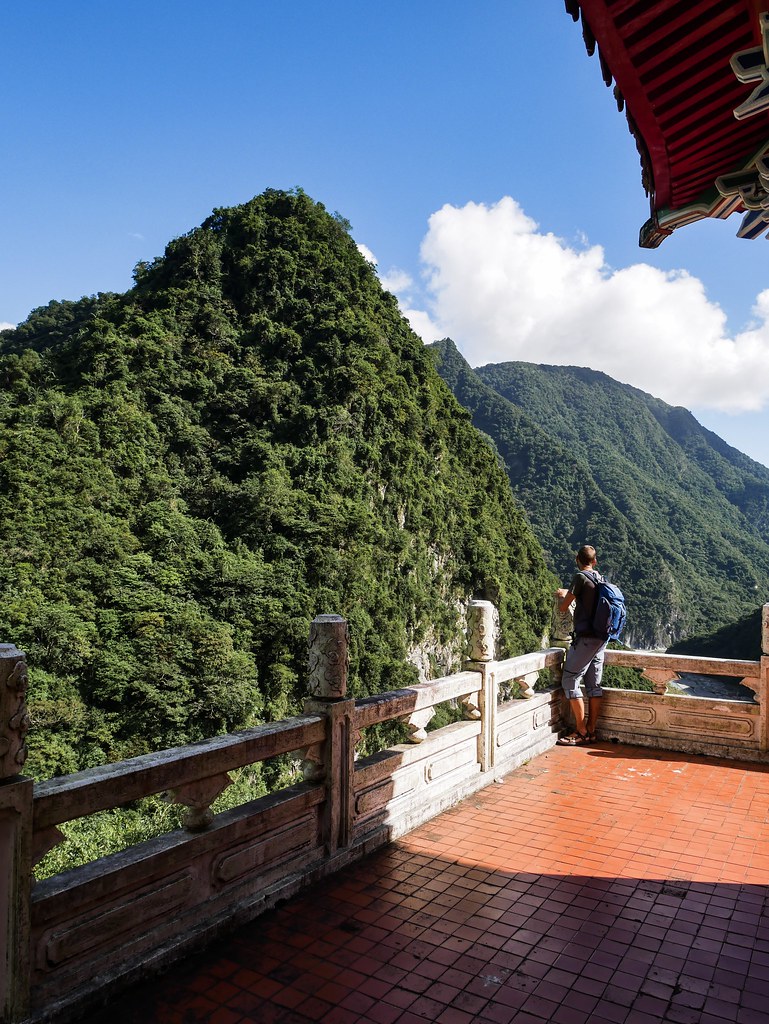 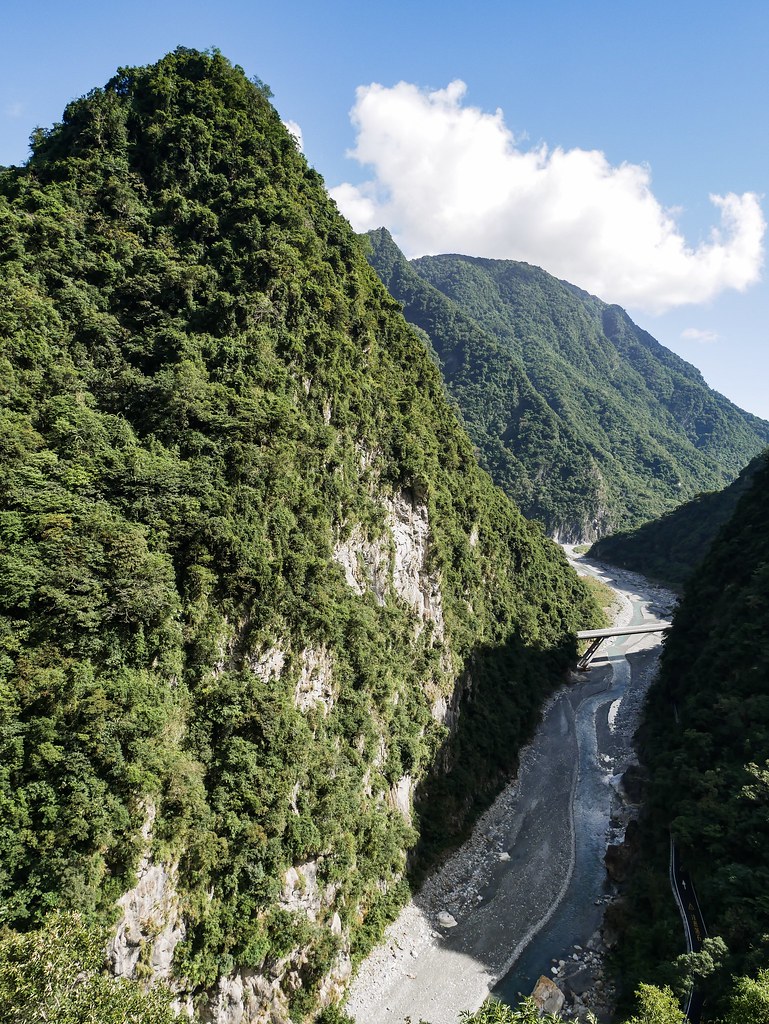 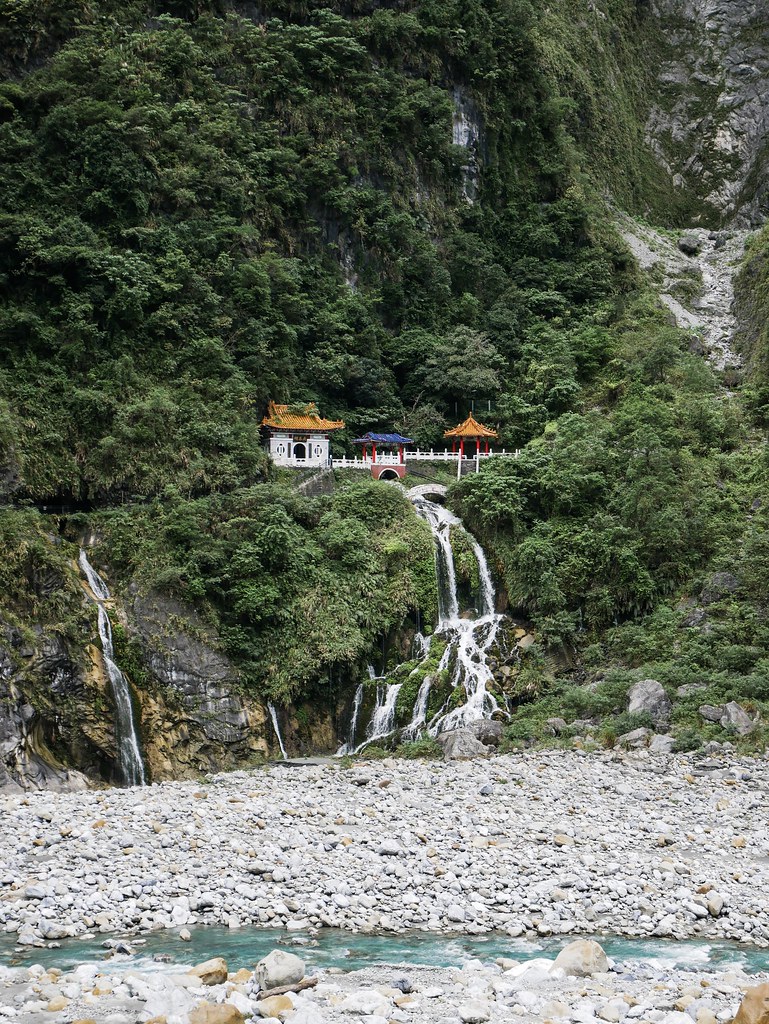 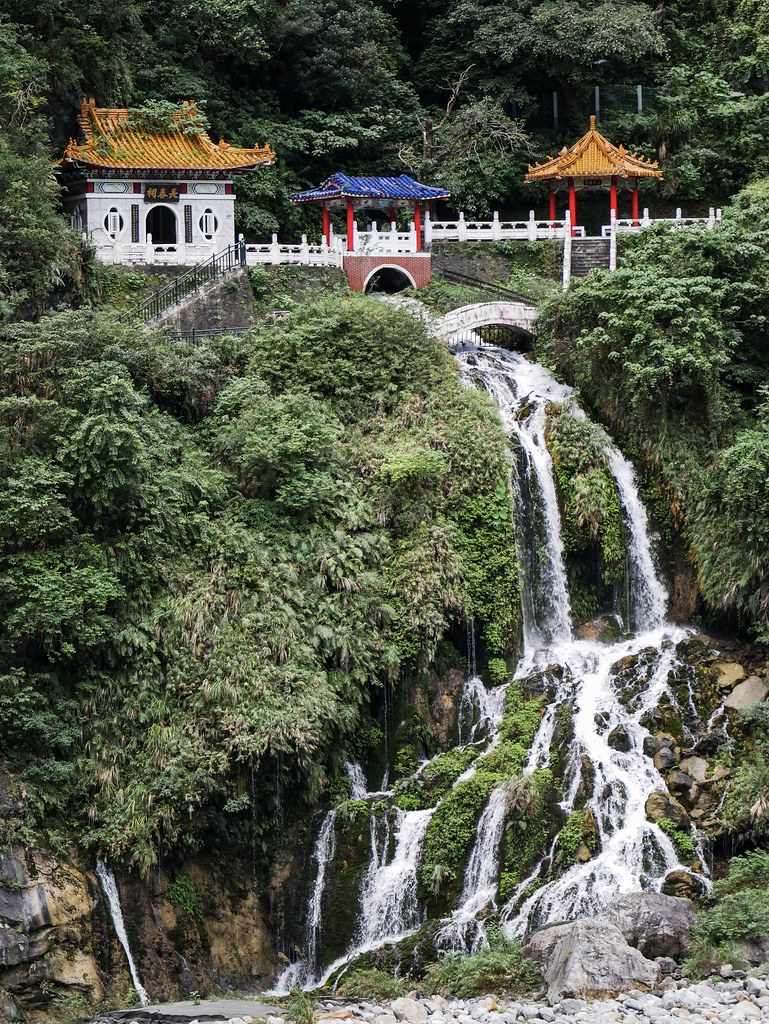 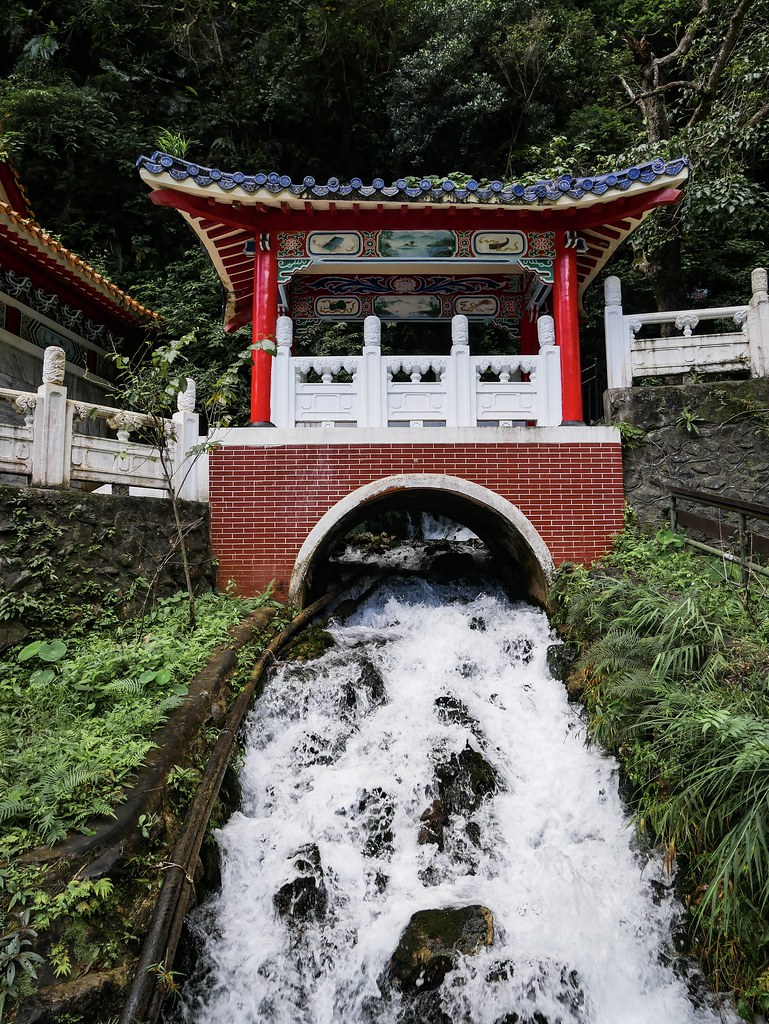 The next trail we wanted to walk was further up the gorge at Swallows Grotto but there didn’t seem to be any buses for a while so we decided to give hitchhiking a go. Low and behold the first car pulled over! A very sweet couple in their 60s stopped for us and we managed to have a little chat in broken English. The Swallows Grotto led us along the old road right through the gorge. Sometimes we walked through tunnels where big holes were blown out so we could peer down at the now silty grey river and up at the never ending walls. At times the steep walls stood 1000ft high and the gorge was just a dozen feet wide. It was very impressive actually. 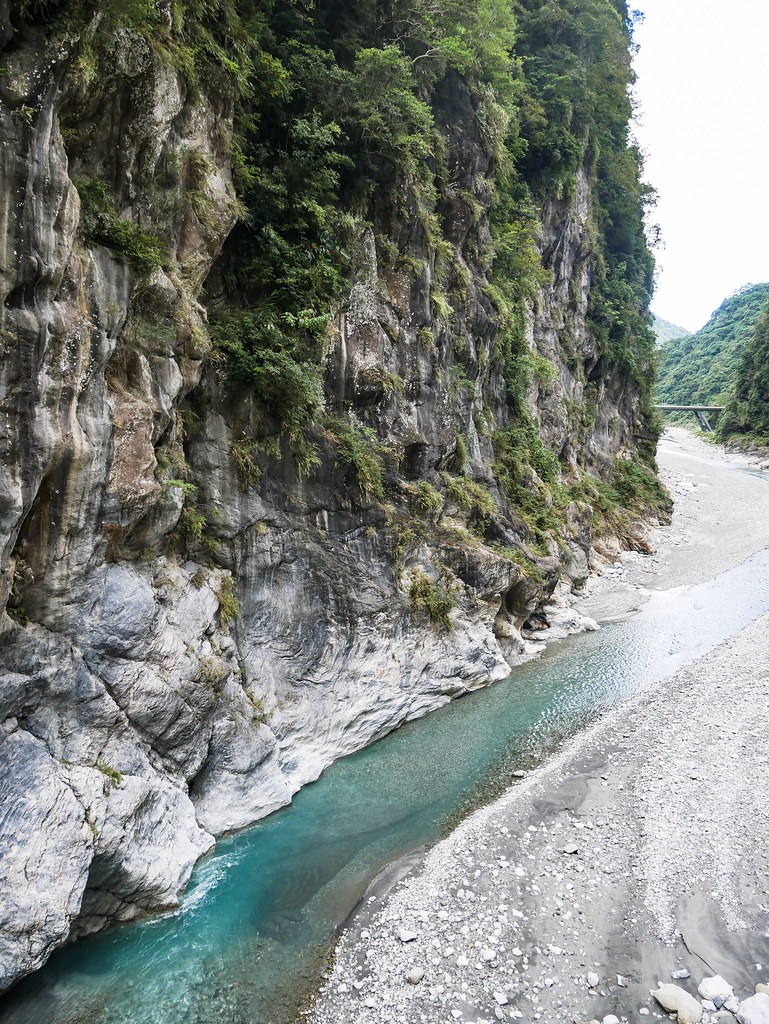 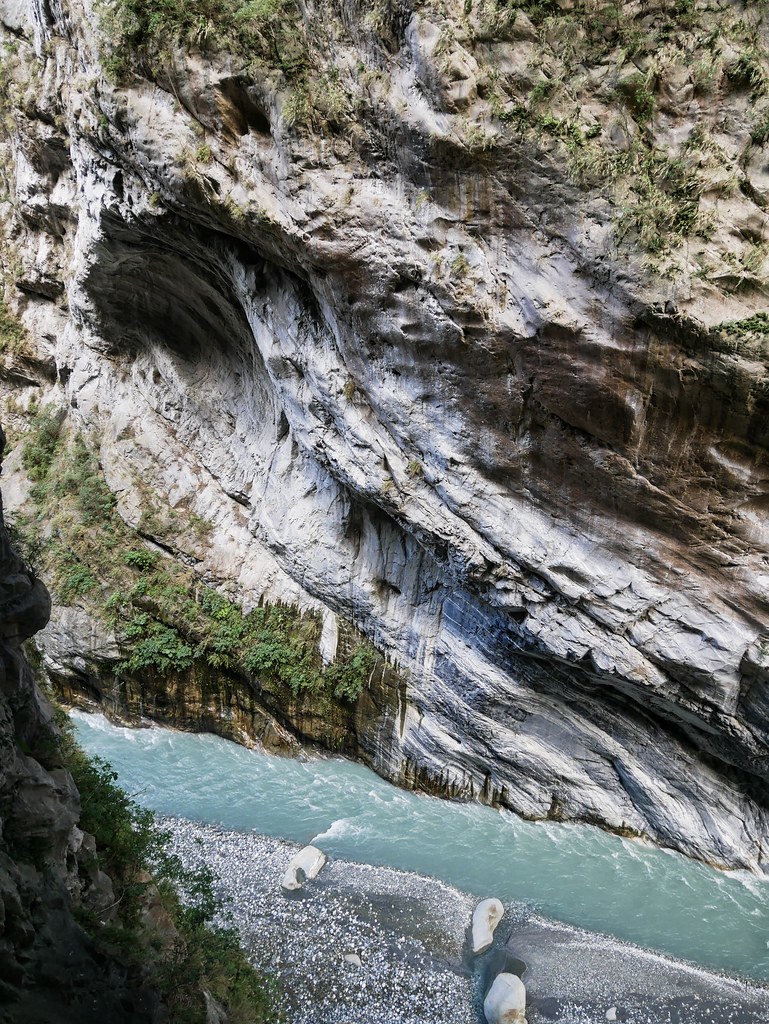 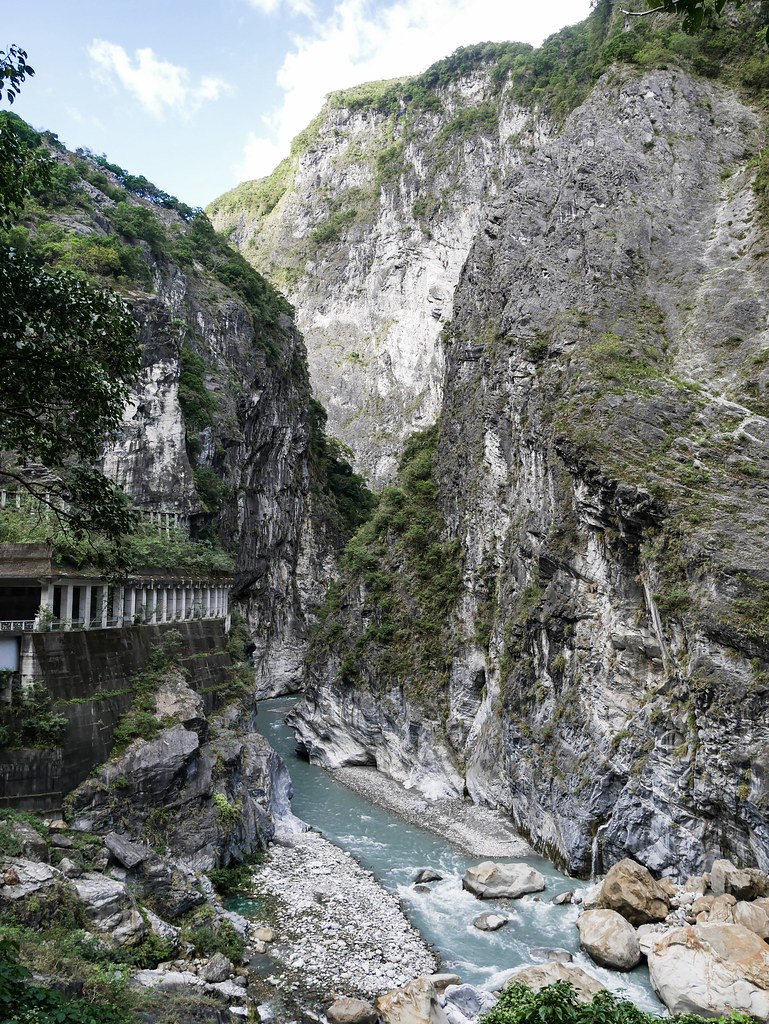 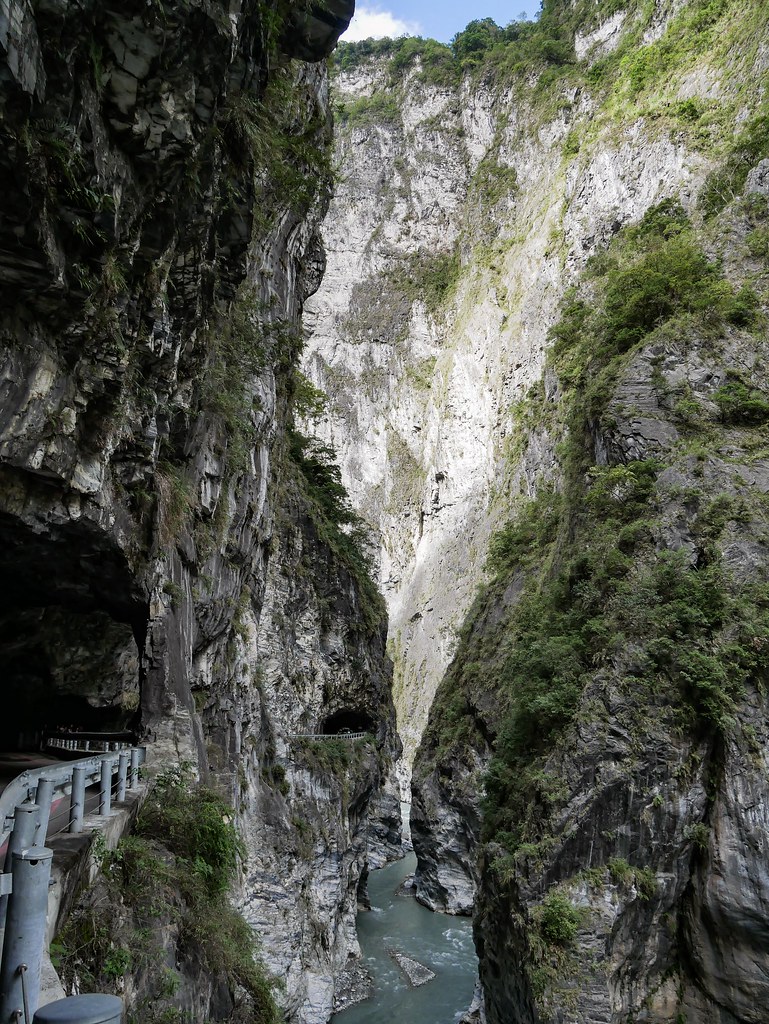 We attempted to hitchhike 4km up the road to the Tunnel of Nine Turns but without any luck but that’s because a bus soon picked us up! This trail also led us along an old road but the tunnel was lined with photos and stories about the gorge. It showed the devastation caused by typhoons and how the river came right up to the road which just seemed absolutely impossible. The gorge is a little dangerous actually as rocks can tumble down at any moment, whether it’s from an earthquake, typhoon or just fragile ground, apparently helmets are available for free at the start of some of the trails but we didn’t spot them. 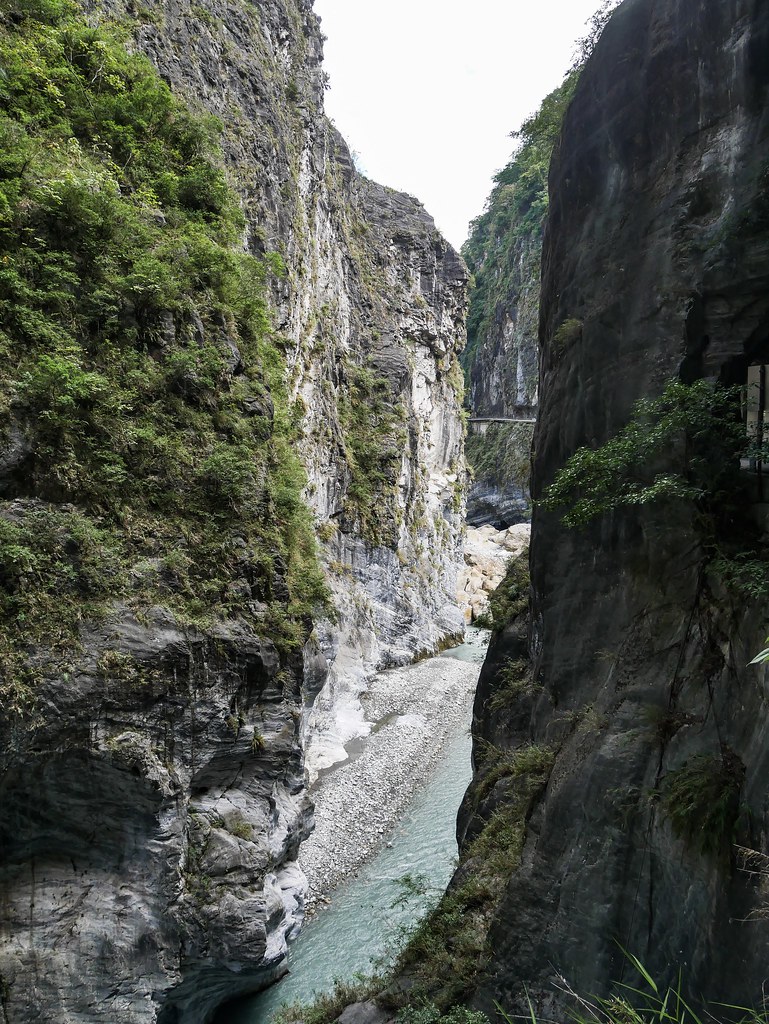 Some of the trails we wanted to hike were closed due to typhoon damage so it meant we actually managed to explore the whole park in one day. So our final stop was Tianxiang and by this point cloud had rolled in and covered the mountain tops, some of which rise up to 3742m! Our final walk of the day was Biayang which ends with a waterfall view, sadly most of the trail was closed due to yet more typhoon damage so we called it a day and caught a bus back to Hualien after a very enjoyable day exploring the beautiful gorge. 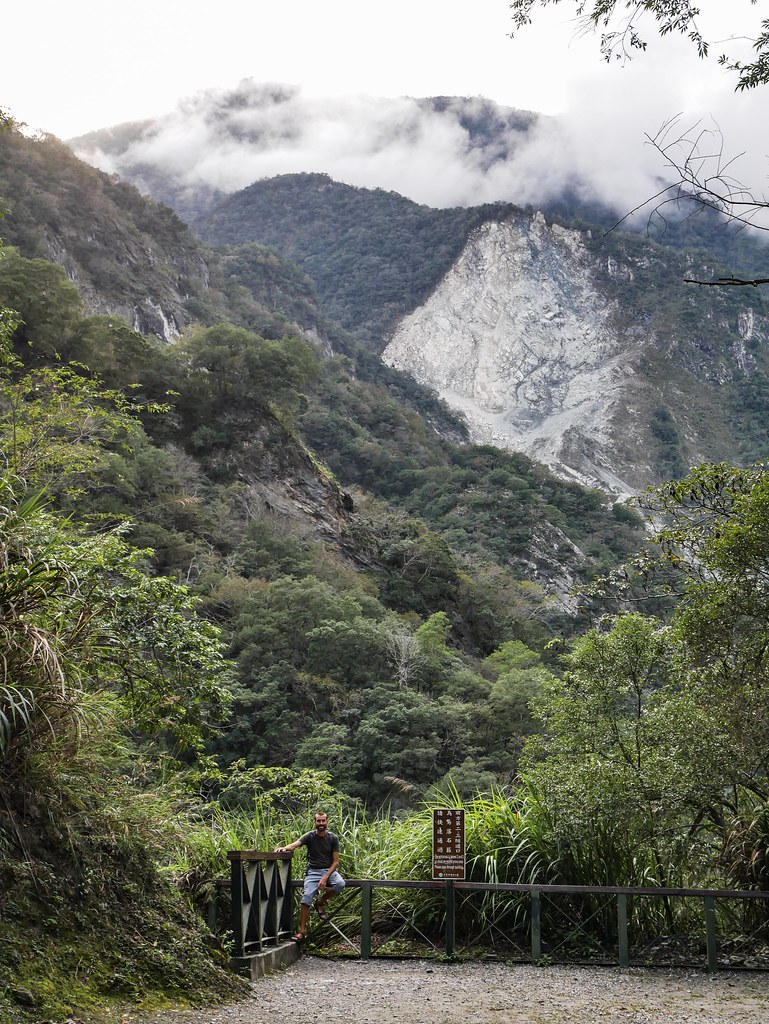