Taiwan is home to 260 summits over 3000m, more than 50% of the land is covered in vegetation, remote hot springs can be found beside raging rivers and there’s endless beaches with great surf…need I say more? It’s been on our list of places to visit for a few years and now it’s finally time for us to explore Taiwan.

Our flight arrived at around 4am, we barely slept on the plane as it was designed for slightly smaller people and our knees were pushed right into the chair in front. Taipei sounded too intense for our first stop so we decided to head to the hot spring town of Jiaoxi first, which is just a couple of hours away on the east coast. It sounded like a good option as we could have some relax time to recover from the flight. We were absolute zombies at the airport so Craig headed to 7-eleven (a convenience store that’s all over Taiwan) to buy some coffee and snacks. I read there’s over 6000 stores across Taiwan and they are one of the only businesses to remain open (24/7) during hurricane force typhoons. They double up as little restaurants so they have a seating area and any of the fridge or freezer meals can be microwaved for you. It offers some of the cheapest meals you can get in Taiwan so we’ll be spending a lot of time eating in them as apparently meals in restaurants are around £15!

Craig came back with a roasted sweet potato that oozed out the bottom and dripped all over my leg. He also bought what he thought was a tub of yogurt and the lid had about 20 little corn flakes to sprinkle on top. Sadly, it wasn’t yogurt, it was literally a cup of milk so the milk to cereal quantity was about 98 to 2. Anyway, we wanted to get the 5am bus into Taipei bus station but it took us so long to figure out the machine and how to buy an easycard which can we tapped when you enter and exit transport. It appeared this particular bus needed a ticket but the counter wasn’t opening for another hour (even though a sign said 24 hours). The bus turned up and the driver just pointed to the ticket counter, which he could see was unmanned and it was impossible for us to buy a ticket yet he just drove off without us. It was so bizarre. They have buses running but no way of buying a ticket so they just drive around empty. It wasn’t the best start. In the end we had to wait yet another hour and catch a 6am bus. It was a nice airport to wait in though and the bathrooms had robot toilets with heated seats which was quite a treat as there was a chill to the air.

Finally we made it to the bus terminal, we were the only passengers on the bus and it was really comfy with big lounger chairs so we managed to have a short snooze. The next bus stop was a bit confusing but a member of staff really tried to help us and a young local translated so we were on our way to Jiaoxi! We arrived at 9am and had a 2km walk with our heavy luggage to our hot spring hotel but check in wasn’t until 3pm so we left our bags there and headed to 7-eleven for another ‘meal’. The staff were really helpful and showed me all the vegetarian options but the meals weren’t great, they love tofu and mushrooms here which are my nemesis. They also love fake meat and as someone who doesn’t like the taste or texture of meat I couldn’t even bare the look of these meals which resembled raw ground pork atop a pile of rice. So we stuck to pot noodles, a yogurt and yet another coffee before going out to explore for the day.

Our plan was to head to some waterfalls a short walk from town and on the way we spotted a butterfly who had most likely been hit by a car. It’s wings were twisted so we sorted them out and carried him around for the next three hours. We tried giving him some water but he was struggling to even stand up. The walk was quite busy for a drizzly weekday but we headed up some steps and arrived at a fabulous sight. A lovely Chinese style pavilion with a red roof stood below the huge waterfall that plummeted down a cliff. I thought that was the main attraction so we were feeling reluctant about continuing up the steps to an unknown area but it led us to the top of the falls as it’s a three tiered waterfall dropping about 100m. The top waterfall was really impressive so i’m glad we made the effort to continue up and we were even lucky to witness a fluorescent green snake slither across the path. I’m not sure if it was poisonous but there were plenty of warning signs along the trail about poisonous snakes. 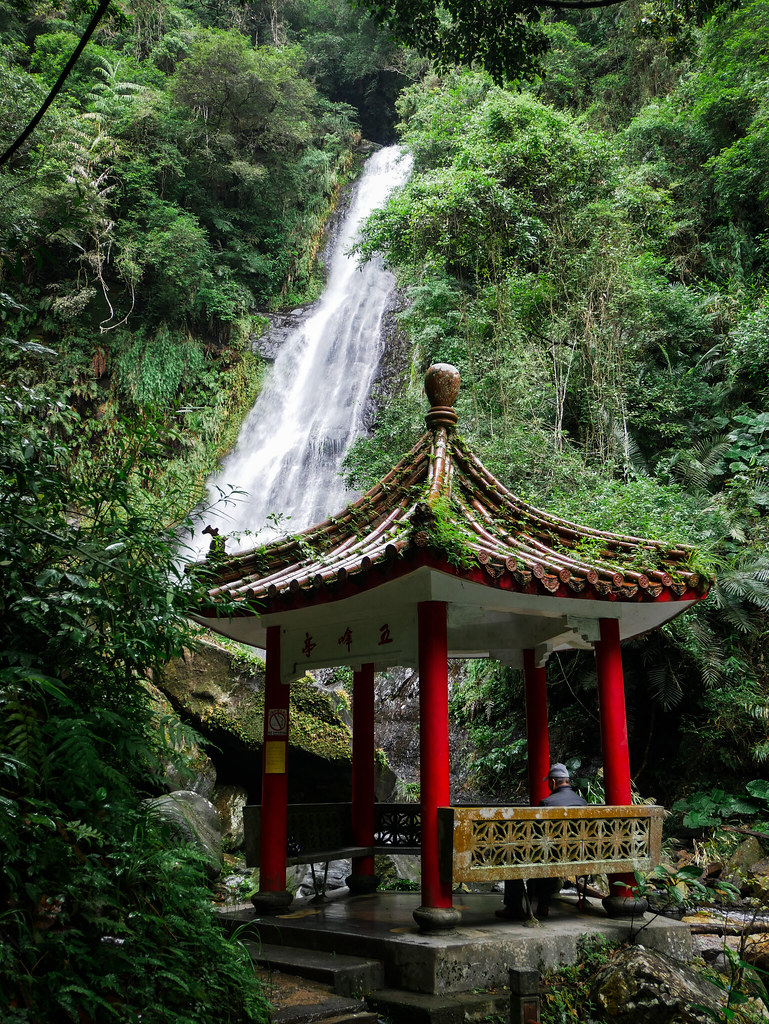 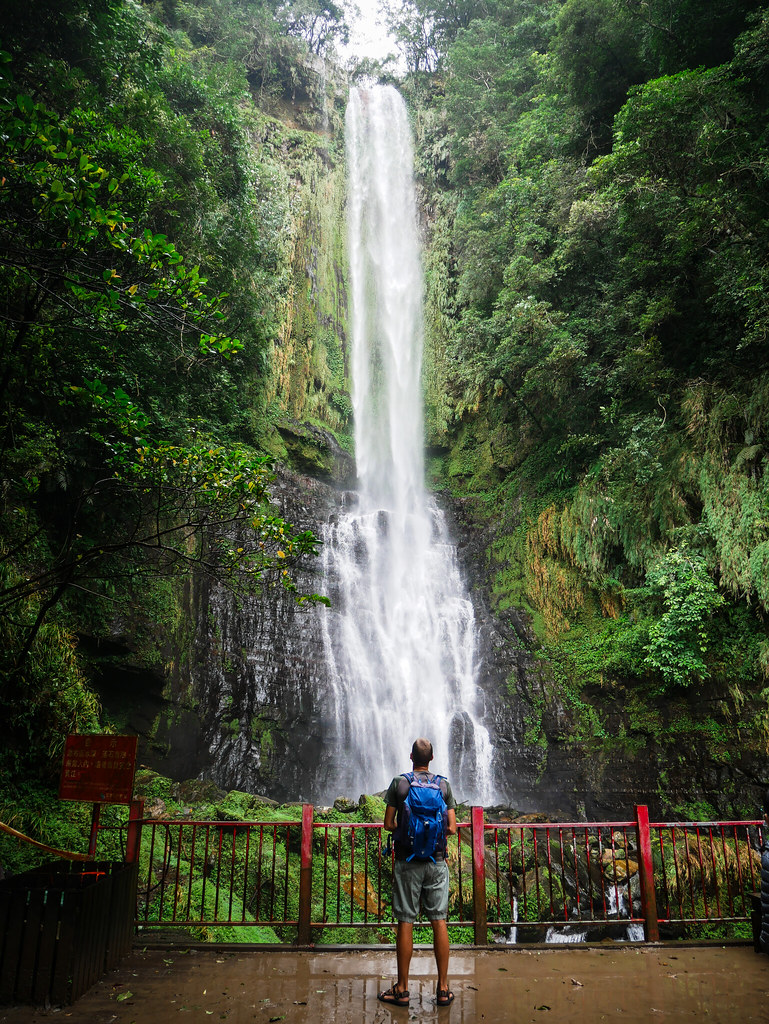 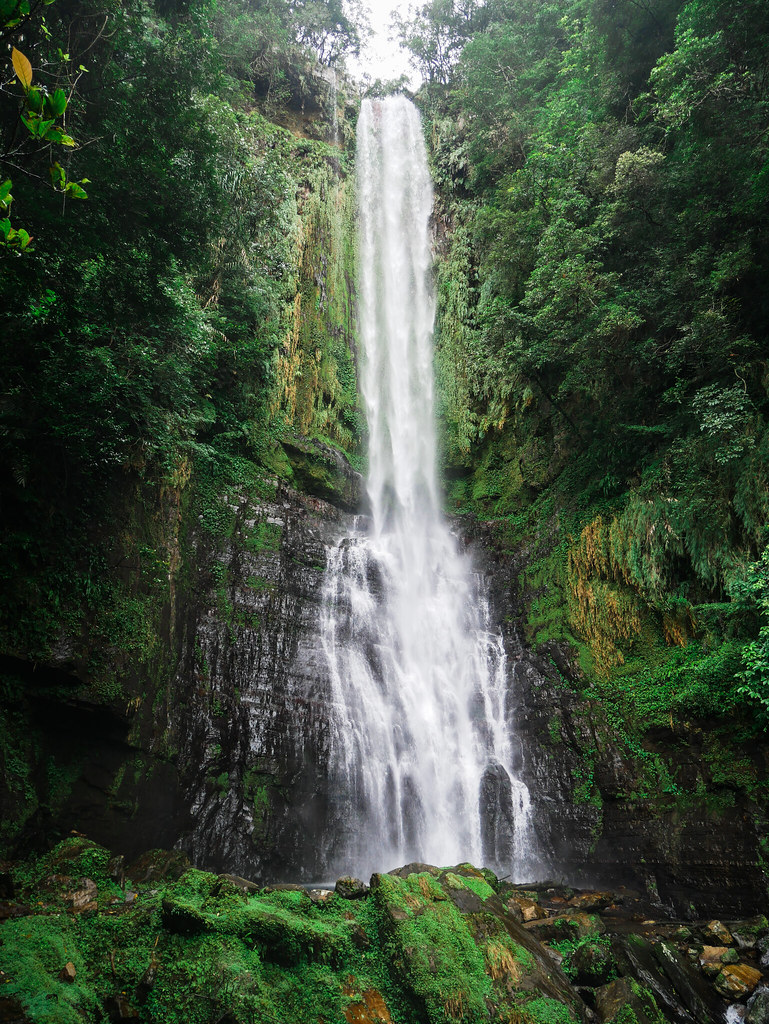 When we got back to our hotel we left the butterfly on a window ledge with some mashed up banana and then we borrowed our hotels free bikes to see some of the towns hot springs. They were set in parks and the first one we headed to had a fish nibbling foot pool. I’ve never tried one of them before so for £2 each we gave it a go. No one spoke English but the staff member pointed for Craig to go to the door on the right and me to the left. I was a little confused as the fish pool was right in front of us but I went into the room and was greeted with a dozen naked women in a hot spring. I quickly retreated and when I got back outside I saw Craig exiting his room too and we both laughed and had to explain to the staff we just wanted to use the fish pool. It was located in a sort of miniature valley with a stream below us where wind absolutely gushed through, the tree’s were shaking like crazy and we felt pretty happy that we didn’t go ahead with our original plans of camping in Taiwan. The pool was warm and filled with little orange fish who swarmed our feet as soon as we sunk them in the water. The fish basically nibble skin off your feet and it’s the most ridiculously tickly thing I’ve ever experienced. I trained myself as a kid to not be ticklish but I was never up against these fish and I was a squealing mess. I could barely keep my feet in the water and we were both giggling like kids while the other users of the pool sat in silence. We did eventually get used to the bizarre sensation and managed to stay for an hour, Craig even fell asleep for half an hour while I scrolled on my phone in a sleepy daze. When we went to leave I asked to use the toilet but they didn’t understand. So I pointed to the hot spring room and tried to ask if it was in there. They just said no but I was convinced it would be in there so I wondered over and they said I had to pay again to go in there. Clearly they didn’t understand me so I got my trusty ‘Point It’ book out and showed them a toilet picture at which point they all let out a “oooooh” sound and a giggle before directing me to the loo.

There was another park up the road which had hot spring water tricking down into small pools where you could soak your feet for free so we had a little relax time there before making our way to 7-eleven for yet another meal. There weren’t any affordable restaurants near us and we were too tired to deal with translating a menu so we had little other choice so this time Craig got some pork fried rice and I managed to find ‘green spaghetti with mushrooms’. It was the only thing that didn’t have seafood or meat in it so I just had to pick the mushrooms out. Craig grabbed a can of sarsaparilla to drink which he remembered drinking when he was young and was telling me how delicious it was but it literally tasted like mouthwash at a dentist. Needless to say we were looking forward to heading to a bigger town tomorrow where there would hopefully be more eating options and a night market to try street food because as we sat in 7-eleven, eating these greasy meals we felt a bit worried about our food options for the next 16 days…even fruit was expensive at over £1 for two bananas.

Finally it was time to check into our room and the receptionist used a translator to communicate with us. While each room has a private hot spring bath there’s also a communal pool on the roof so she wanted to check we had a swimsuit to wear but the translation didn’t come through right and it said “Do you have swim wear so you can soak your big dumplings?” and we absolutely roared with laughter. I have no idea what she said for it to translate to that but I gave a thumbs up and we all seemed to understand one another.

Our room was small but a nice Japanese style with a futon bed on the floor and a big stone hot spring bath. It was over our budget at £35 a night but we figured it would be good for us to relax after such a horrible flight time and busy day. The spring was lovely and hot so we soaked in it for an hour and didn’t have any energy to go back out for dinner so we just ate some leftover crackers and bread and fell asleep at 8pm.

For an extra £2 our hotel included breakfast which was actual a coupon which we needed to redeem in a cafe up the road. We opted for a cheese omelet and thick toast with chocolate so we could share both but the omelet wasn’t what we were expecting. It was kind of like a pancake with an omelet inside and some plastic cheese melted into it. But there was a sauce drizzled over it which I really wasn’t a fan of and the slimy yellow cheese resembled undercooked egg so after my second mouthful my gag reflex started coming in and I had to quickly devour the toast to get rid of the flavour. After one final soak in our private hot spring we set off to the train station to make our way south to Hualien, said to be the highlight of Taiwan.