Mauritius is known for being an expensive honeymoon destination but I discovered it was just about possible to get a room for as little as €25, cheap street food and very affordable buses so it was decided, we’d fly to paradise! Mauritius sits in the Indian Ocean and was formed thousands of years ago by underwater volcanic eruptions. The Dodo bird used to call Mauritius home, apparently it lived undisturbed for so many years that it lost it’s ability to fly, so when people started exploring the island and bringing all sorts of animals with them the Dodo’s eggs were eaten and it went from being an abundant bird to very rare in just 100 years…and soon after it became totally extinct.

Mauritius sits in the Southern Hemisphere which means it’s winter from June to August and the sun sets quite early at around 5:45pm. It’s also the low season with mild, dry and windy weather with temperatures from 20° to 25°. Weirdly the peak summer season coincides with the cyclone’s so winter sounded like a pretty good option for us.

Immigration took well over an hour at the airport, but eventually we were let in and headed to the bus stop. We were the only tourists catching a bus, everyone else was picked up by their hotel or got a taxi. So we sat with the smiley locals at the bus stop and a few started conversation with us. They all speak English and French so it’s very easy to communicate which is great. As we waited a bright red bird landed in front of us and we were in awe of it, however the lady next to us found our excitement very amusing and I mumbled to Craig “it’s probably the equivalent of a pigeon here”.

The bus cost about 55p for a ride and it took us to Mahebourg where we had to get another bus a short distance to Blue Bay where we were spending the first few nights. The hotel we booked into had a pretty low score online so we were a little sceptical but it was the only place we could afford to stay in this area so we didn’t have much of a choice. Sadly the room wasn’t very clean. Ironically the floor was freshly mopped and smelt of bleach which is good but it hadn’t been swept or hoovered…ever. It looked like the cleaner had swung the dirty mop up and smeared it over the mirror and table. On the plus side the bed was super comfortable and we had a balcony, private bathroom and kitchen too. By the time we’d checked in it was quite late in the afternoon so we just took a short stroll to Blue Bay beach. From google earth it looks magnificent, a deep blue hole encircled by turquoise water and endless beaches, it was a little cloudy and late in the day when we arrived so it looked a bit different in person.

There weren’t many eating options in Blue Bay but the best reviewed place was a little burger joint. The staff were warm and welcoming and we got a chicken burger, veg burger and 1 coke for €11. Not bad for an island famous for being an expensive honeymoon destination. By 9pm we were fast asleep after our long travel day.

We made a plan to wake up early and take our breakfast to the beach for sunrise…but when we woke the sky was already on fire so we didn’t have time to make a coffee and just ran down to the coast. The colours got paler which was a shame as it was still 30 minutes before the sunrise but we still enjoyed the view of it rising before heading back to our balcony for a very sleepy breakfast.

The beach looked incredible today, like a true paradise island. The water was crystal clear and faded into a deep blue colour before another turquoise strip appeared in the distance. There was a little island ahead of us and we could see the crazy offshore waves crashing into the outer reef. There were quite a few stray dogs on the beach and one came and sat with us, resting his head on my legs while I sunbathed. Blue Bay has a few different beaches and the further we walked from the main one the quieter it became until we had a whole beach to ourselves. Craig went for a little snorkel over the deep hole but the coral was all bleached, he did see a few fish and a turtle but nothing too riveting. The weather was a little iffy with clouds blocking the sun and a couple of short rain showers. It cools down pretty quickly when the sun isn’t out! 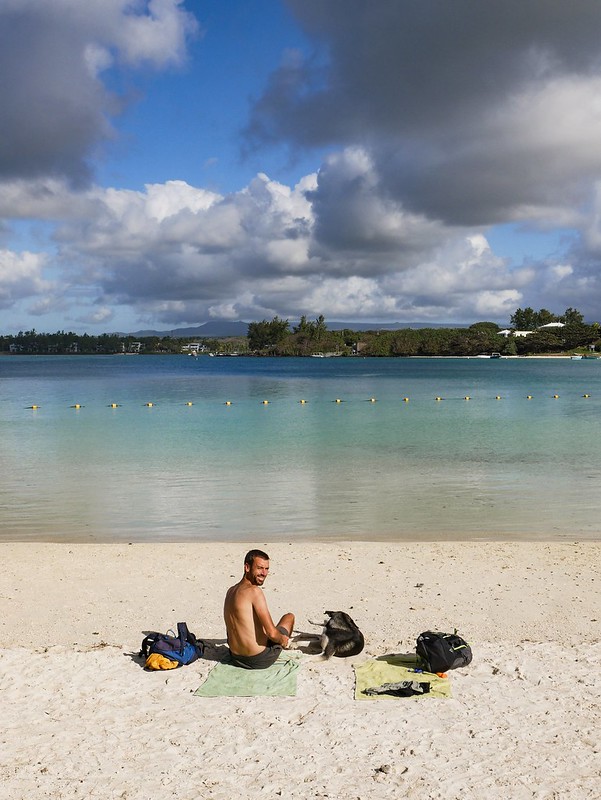 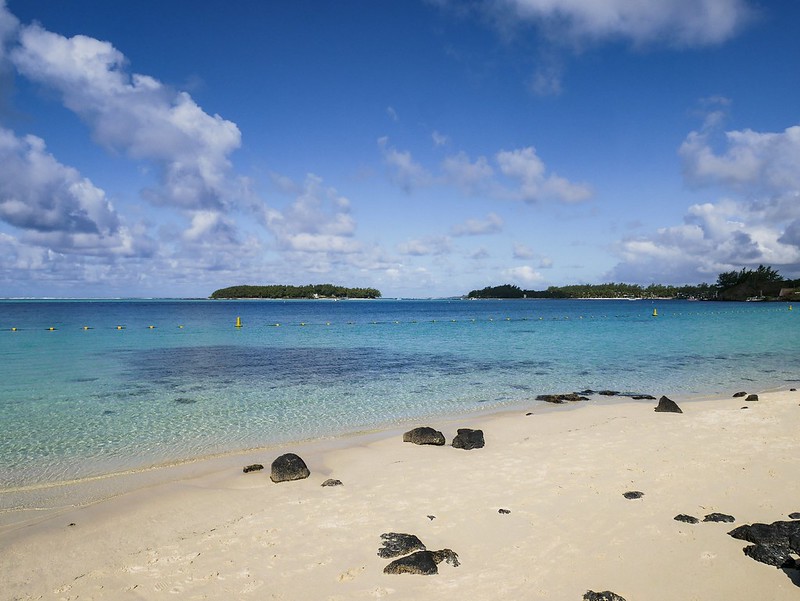 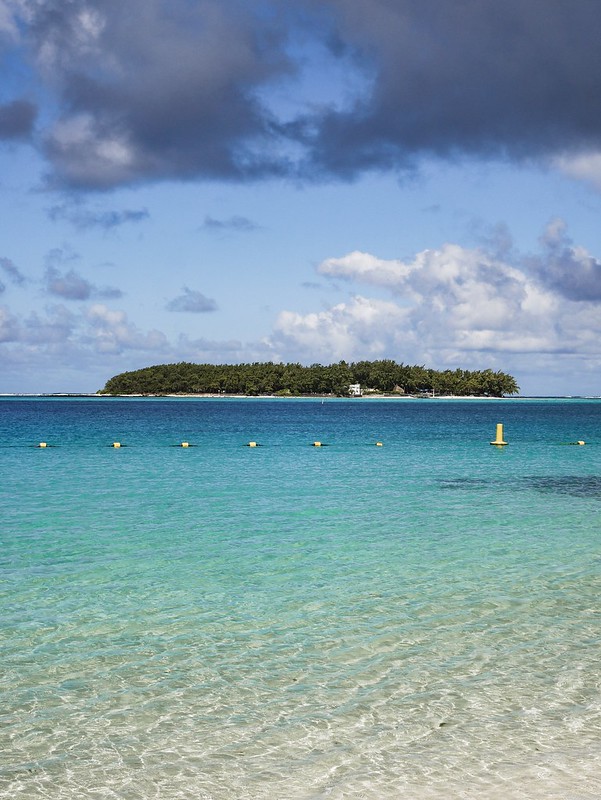 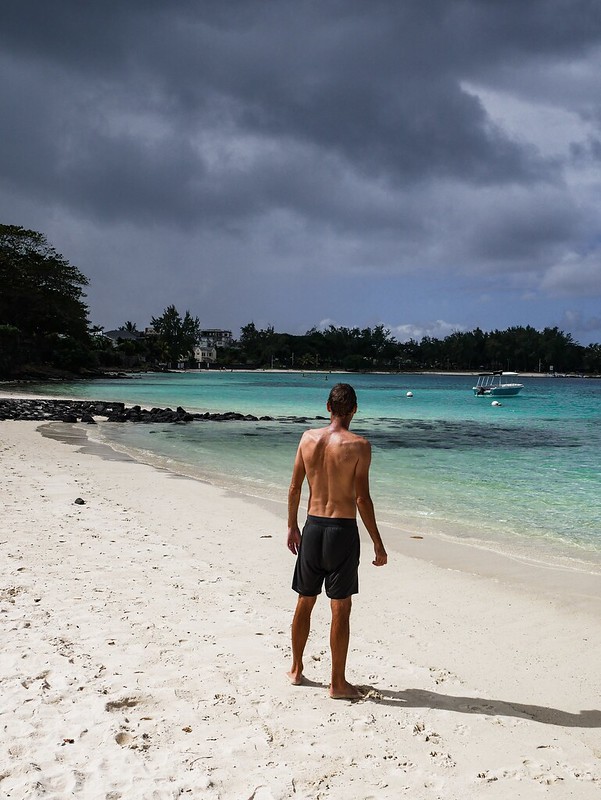 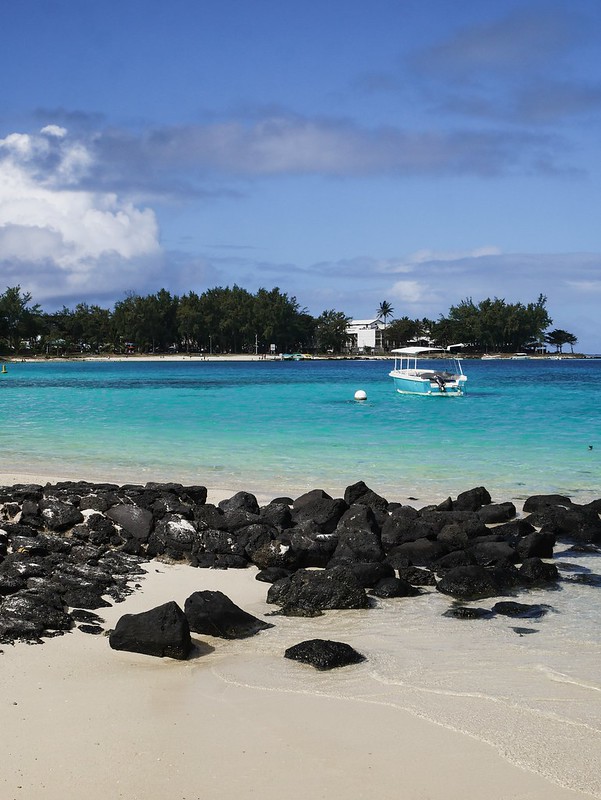 We woke even earlier for the sunrise today but as we stepped outside we realised it was raining. The sky was still turning a deep terracotta colour but it was all overcast and drizzly so we headed back to bed. By the time we woke up the weather had all cleared up and the beach looked very inviting!! A lovely little dog we befriended laid beside us all day, she was attacked by another dog yesterday and we intervened so I think she’s quite fond of us now. We picked a quiet beach away from everyone else and it’s easy to forget how special that is – having a white sand beach with pristine aqua blue water all to ourselves. I headed out for a snorkel but it wasn’t very impressive to be honest, there was lots of dead coral with just a few small shoals of fish. The water was strange too, the visibility was pretty good but at times it looked like either warm and cold water were mixing or salt and fresh water because it would all go blurry. I didn’t feel very confident so I pulled a U-turn and swam back but it became even blurrier and I was in a bit of a panic, swimming as quick as possible. 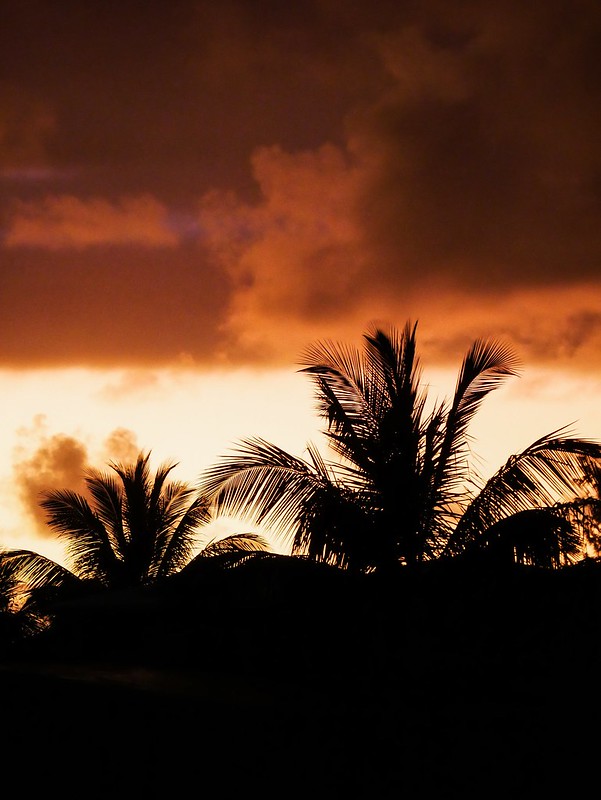 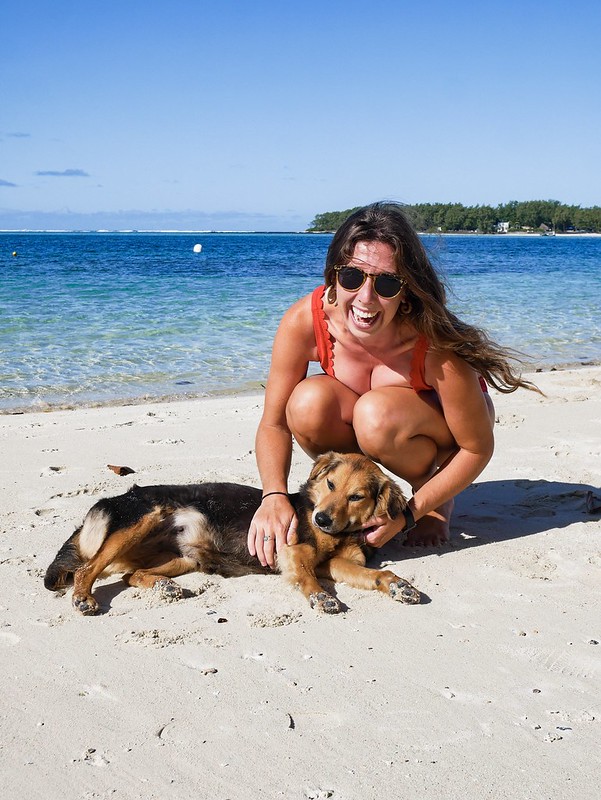 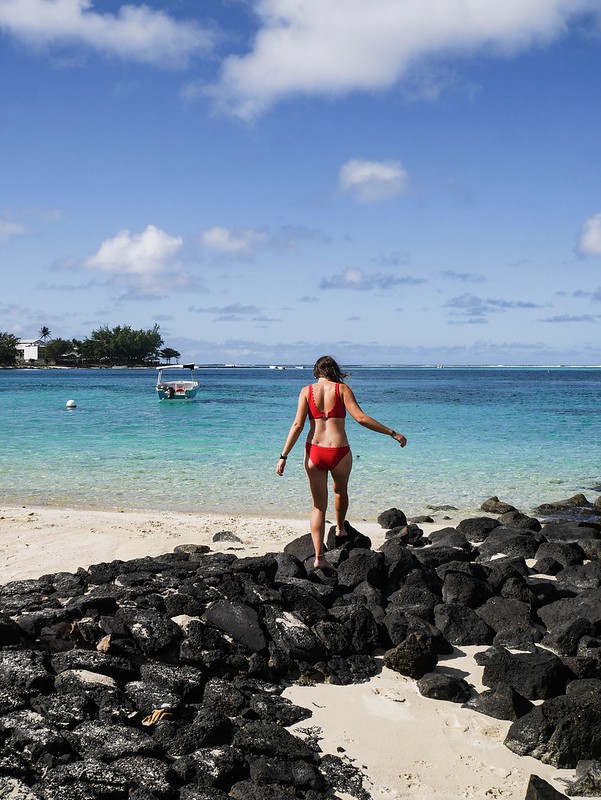 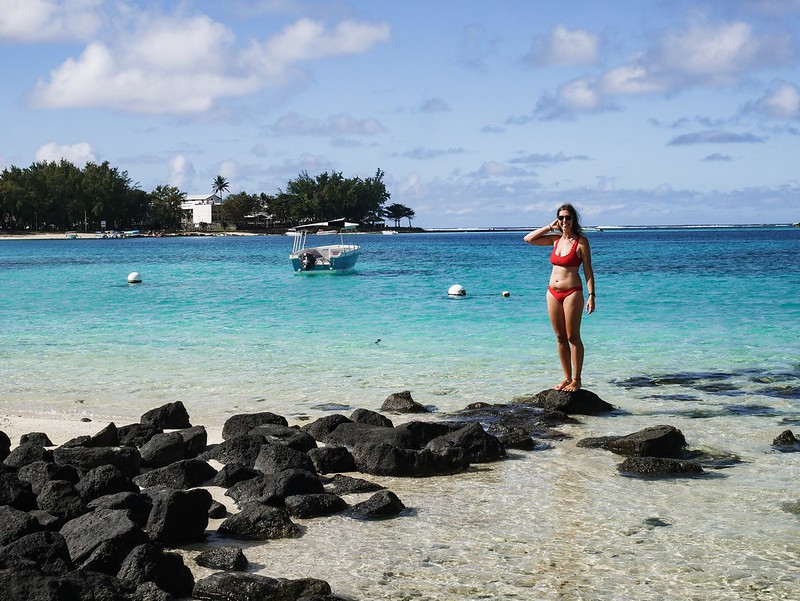 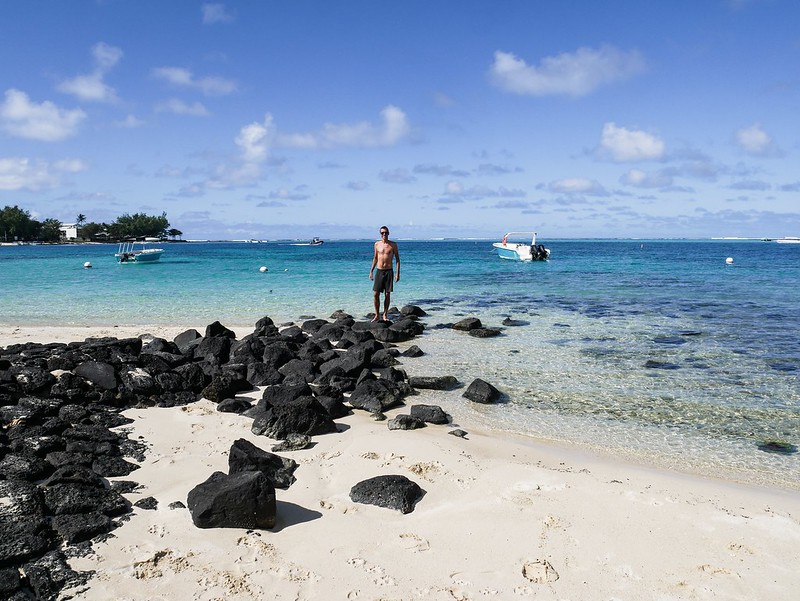 We decided to leave Blue Bay after our three days there and make our way across to the south west corner of Mauritius. Our host really tried to promote a taxi instead of the 3-4 buses we had to take but at €40-50 it was just too expensive for us. We couldn’t find any schedule for the buses so we just headed down the road to the bus stop when we were ready. As we were approaching the road I said “that sounds like a bus!!” and then we watched as a clanky old bus rumbled past us. Nooooo! But it suddenly stopped so we began running, not sure if we’d make it in time to bang the side and let the driver know to wait for us. The driver had in fact seen us and pulled over which was a relief. To be fair we were the only people on the bus so maybe he was excited to have his first passengers of the day. Our first stop was Mahebourg, about 6km away where we had to change buses and head across the island towards Quatre Bornes. To avoid paying for an extra seat we had our heavy backpacks on our laps the whole way. We passed lots of colourful Hindu temples with hundreds of individually painted statues of gods leading up the towers. The next bus station was a couple kilometres away so we caught an extremely modern tram where we had a 45 minute wait for our final bus to La Gaulette.

Craig went for a stroll to the market and came back with freshly made samosas and gautaux piments which were little deep fried balls made of lentils, spices and chilli. Street food is one of the things that really excited us about visiting Mauritius and it was the perfect bus-snack. A lady sat behind us on the bus and insisted we take a bag of cookies she’d handmade. They were like two buttery shortbread circles sandwiched together with a little jam and covered in pink icing sugar…my goodness were they good!

The journey along the west coast offered views of the islands bizarrely shaped mountains that just rise out of the flat land. Some were pointy like witches hats and others looked like tropical versions of Switzerland’s Matterhorn. It almost felt like we were driving through Jurassic park and I wouldn’t of been surprised if I saw a dinosaur out the window. After four and a half hours we arrived in La Gaulette and walked to our guesthouse. Our first room in Mauritius was very disappointing and dirty so we had low expectations for this next one but we were pleasantly surprised. The room was spotless with a huge bed and a balcony on three sides of the buildings so we got a view of the forested hills behind us, the sea in front and the famous rocky peak on Le Monte. There were two rooms on our floor and we shared a kitchen and bathroom, but as it turns out our neighbours never showed up so we had the place to ourselves and we’re pretty excited about exploring this new area. 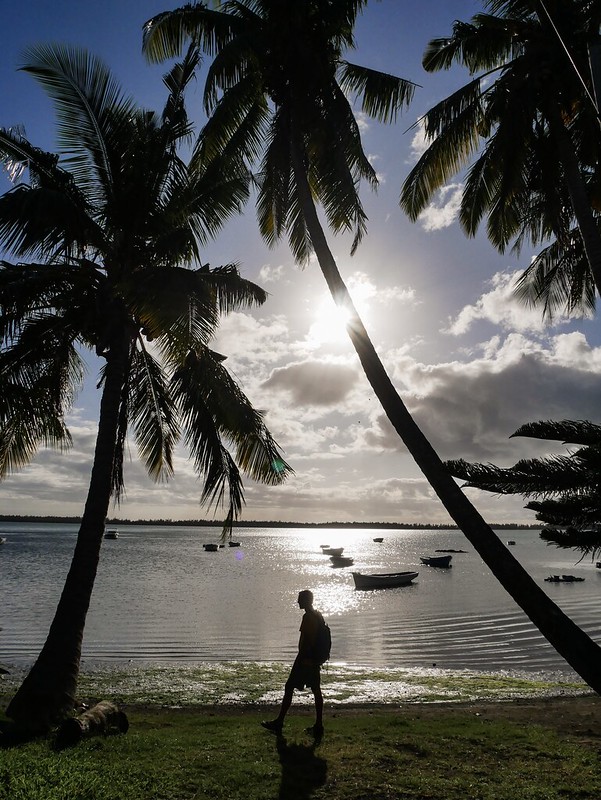 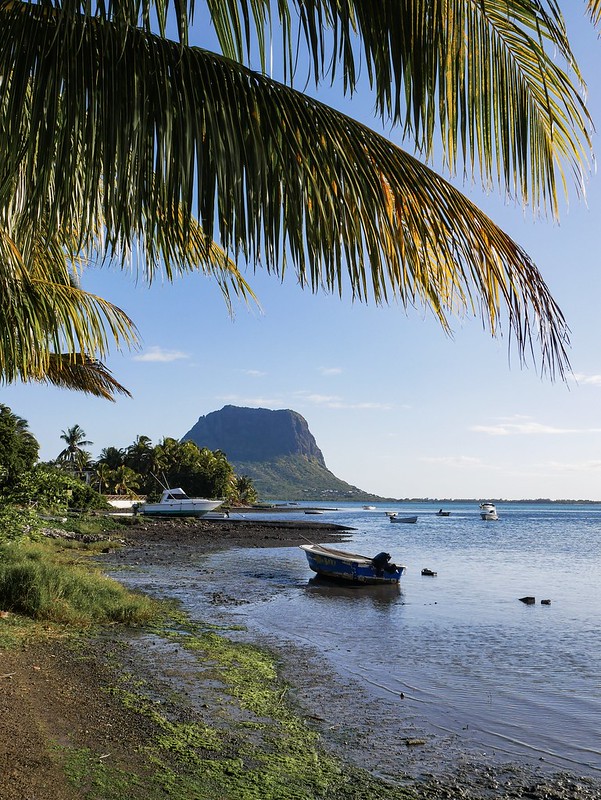