We couldn’t decide where to go after Georgia, some countries we wanted to visit were still closed to tourism due to covid, others were deemed unsafe to travel by our government website. So then we considered returning to Asia but it’s the rainy season for most of those countries. We scratched our heads for a couple of days, constantly searching skyscanner and hotel websites to figure out how affordable each option was. We finally made a decision, we were going to fly to Mauritius! It’s been on my radar for a while as I read you could just about get an affordable room and there’s a big street food culture so we could eat fairly cheaply too.

First we had to book a flight to Abu Dhabi in the UAE and the following day we’d take a bus to Dubai. Our flight from Dubai to Mauritius was at 2am the next day so we’d have enough time to see a bit of the city. But it didn’t come without stress – bizarrely we were allowed to fly into the UAE with just proof of vaccine but if we wanted to visit any public place in Abu Dhabi including restaurants and the grand mosque (which was one of my main reasons for our visit) then we’d have to get a PCR test on arrival. I couldn’t get any solid information about how long it took to get the results and I was paranoid if we tested positive we’d be stuck in expensive Abu Dhabi for 10 days!! So we ended up changing our plans and catching a bus from Abu Dhabi to Dubai that first day as the rules were much more relaxed in that Emirate.

We had to wait so long for Craig’s bag to come off the plane and it’s because some clever staff member started putting baggage on a different conveyor belt at some point. Anyway, next stage was to get a bus to the bus station but we had to wait 15 minutes for a staff member to return to the information desk. He helped us buy a ticket and then we headed outside, into the insane heat. It was 48° and absolutely unbearable. The heat was exactly the same as when you open the oven door to check if your food is cooked. Luckily even the bus shelter was air conditioned so we sat in there and waited until we saw our bus number. There were cars illegally parked in the bus stop and I think because of that the bus didn’t stop!! We were so annoyed, a nice Asian couple wanted to get the same bus and they checked the schedule online, the next one wasn’t for almost an hour!! Argh!! On the plus side the bus drove right past the grand mosque so we got a great view of the fabulous white, domed structure, although I’ll have to return in the future to see the inside.

From the bus station we quickly hopped on a bus going direct to Dubai which took about two hours. The city is well connected by metro so we took that to our hotel. We managed to get a great price for our room as it’s the off-season now…unsurprisingly no one fancies a holiday in this heat so we booked into our first ever Hilton Hotel! It was €47 for the double room including a breakfast buffet, roof top pool and a gym which I have no interest in using. During the peak season the same room costs over €250! We had to wait about 20 minutes to check in which was very frustrating, maybe this is what it’s like for the rich and famous, I should tell them that it’s much quicker to check into a hostel. Anyway, the room was very nice but we headed straight out to get some food. It was 9:30pm and all we’d eaten today was a few bananas and snacks. I just wanted a nice filling meal so we decided to head to Dominos pizza as you can’t really go wrong there. At 10pm the city was still uncomfortably hot, and it was windy too but it just felt like an industrial hairdryer was blowing on me. The staff in dominos were so friendly and gave us a really good discount voucher. We instantly noticed how kind and helpful the locals were, it’s such a contrast to the grumpy Georgians. 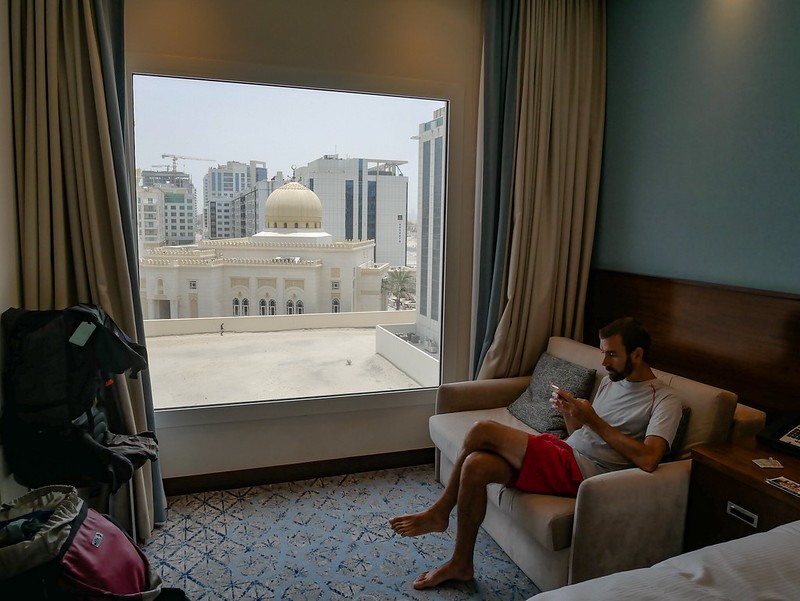 Dubai is a melting pot of cultures and immigrants count for a whopping 88% of the population. But there also seemed to be a big divide in class. For example we didn’t see any Emiratis on public transport or walking along the streets…they were driving the swanky cars around the city or shopping in the huge the air conditioned malls.

Our flight to Mauritius had a connection in Kenya and we had a panic because we’d forgotten to check if there were any covid checks or visas required – it’s been a hectic few days. So we were up until 2am filling out forms and awake again at 9:30am as we wanted to give ourselves as much time to fill up on breakfast. There weren’t any baked beans which I was thoroughly disappointed about but everything else was great. There was even a lady making waffles! We ate so much that we both looked pregnant afterwards and felt like absolute shit. But hey, at least we didn’t have to buy lunch! The pool was open 7-7 so we headed there at 12 and were met with a locked door and a sign saying ‘closed for cleaning 12-13’ what the heck?! So that was rather annoying but we went back at 1pm and enjoyed a little swim. It was so hot on the roof terrace though, even the metal ladder was hot to touch. 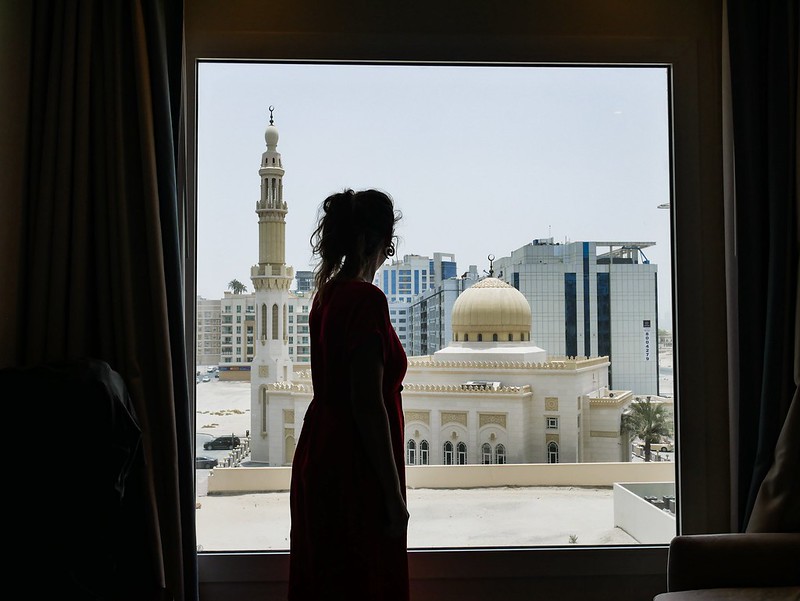 We were able to leave our luggage at the hotel so we could go and explore the city. We opted for the metro towards the marina area first but we didn’t last long on foot. The heat was suffocating! We got a view of the high rises along the waterfront but it was too hot to enjoy so we headed back on the metro to visit the Dubai Mall. I was concerned that the mall was a kilometre from the metro stop but I needn’t worry, there was an air conditioned walkway the whole way with a travelator to speed up the walk. It was a humongous mall and through the glass ceiling we spotted Burj Khalifa, the tallest building in the world at a whopping 828m. 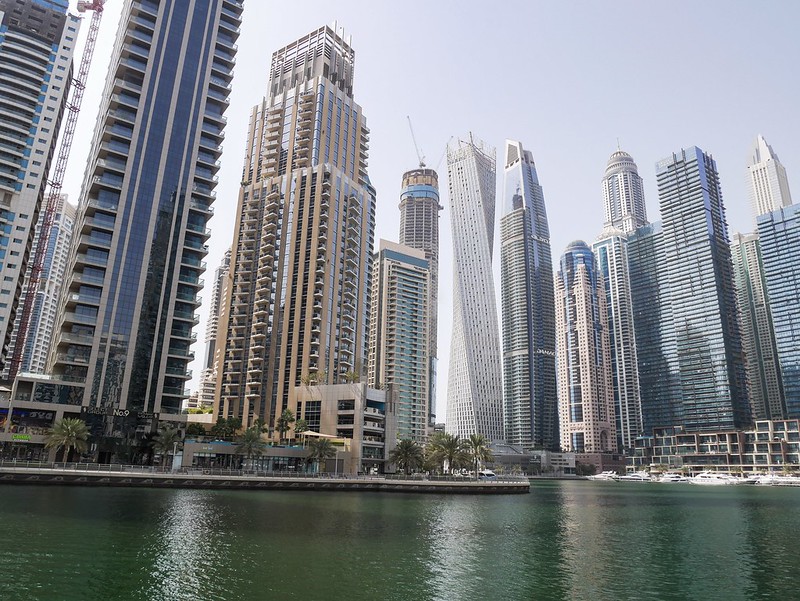 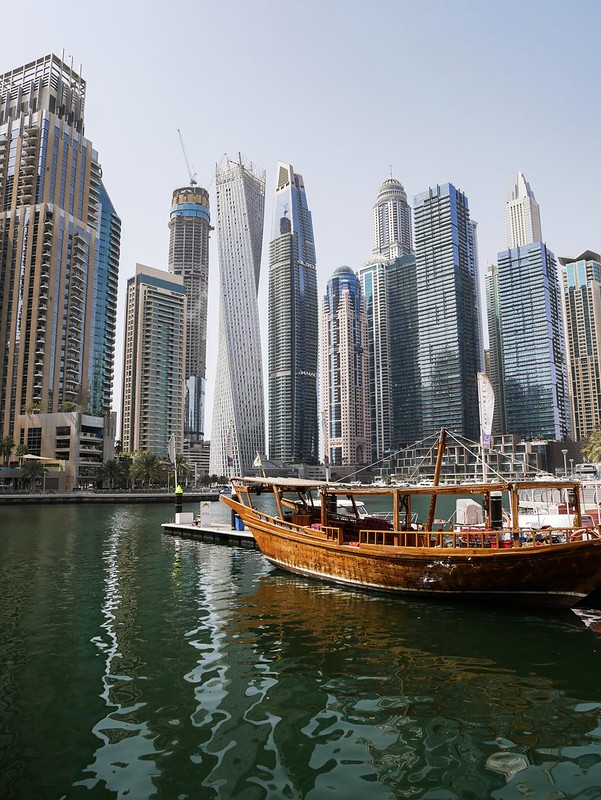 There was a souk section but with very fancy shops and a huge dinosaur skeleton in the middle of a room. I thought it was missing it’s head but it was so tiny it just looked like a continuation of its neck. There was every designer shop you could imagine, with people buying so much they paid for sort of fancy golf cart and driver to take them and their shopping bags around the mall. There was also a huge Aquarium inside the mall which you have to pay to enter but the whole back wall is visible from the mall so it’s free to view. The deep blue water was filled with a variety of sharks, fish and rays. It was mesmerising to see them swimming so close to us but also heartbreaking that they weren’t in the wild. We had an Indian Thali in the food court for dinner and then rushed back to our hotel to grab our bags and head for the airport! 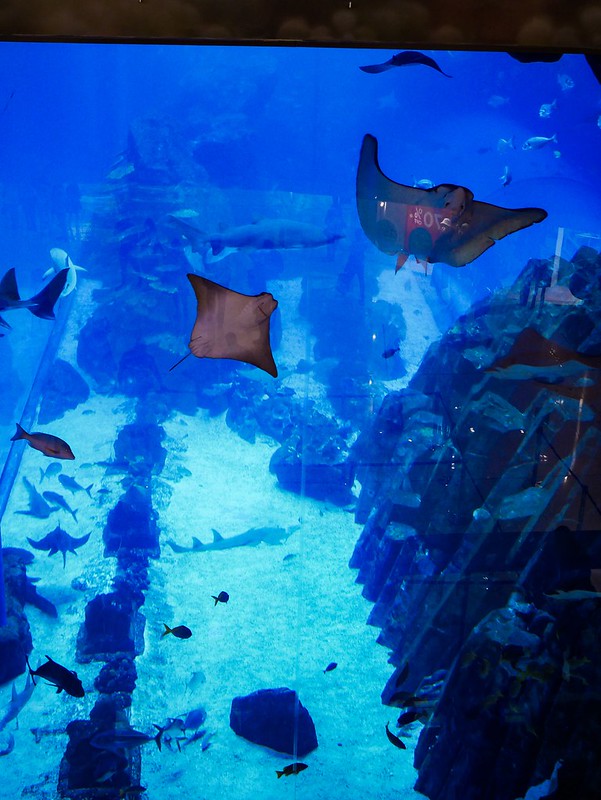 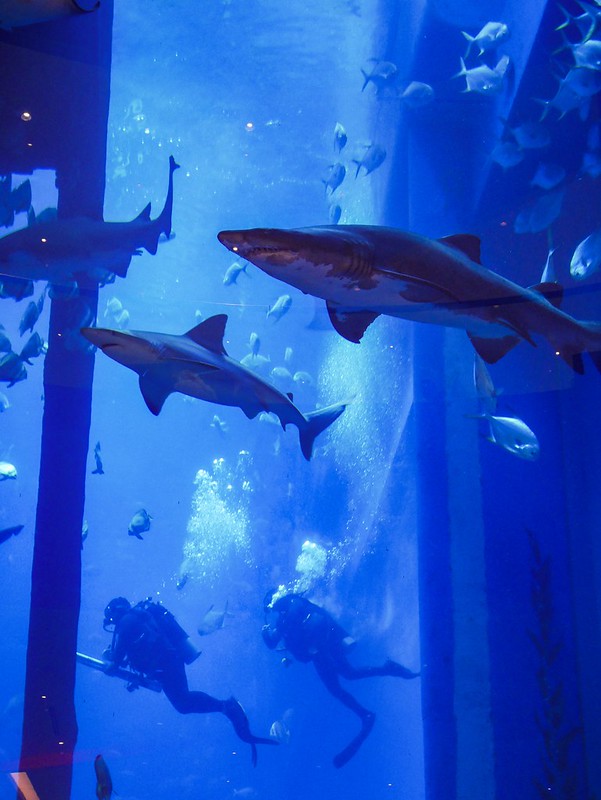 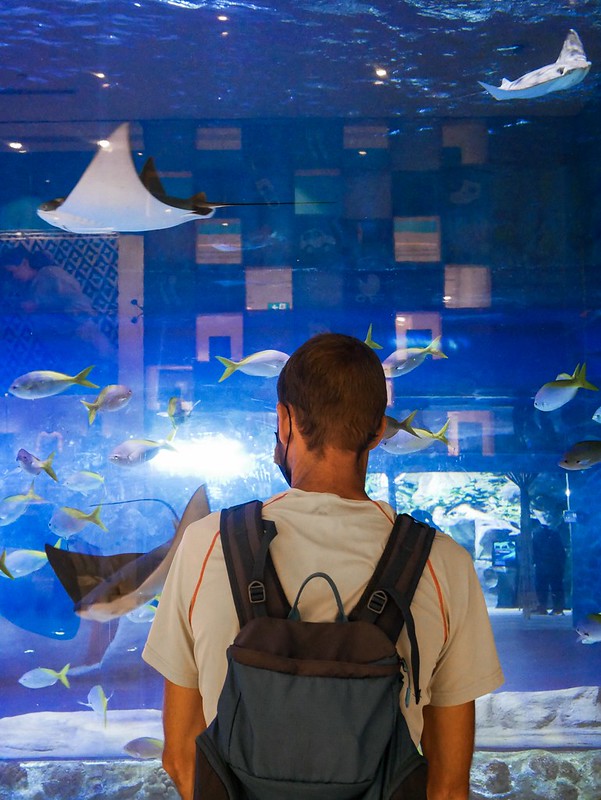 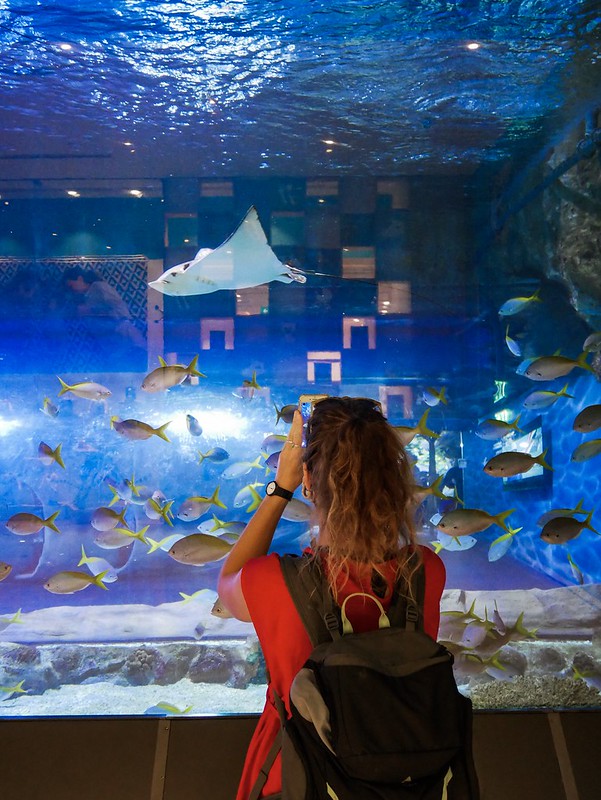 Our first flight was delayed so we were getting worried about our connection in Nairobi. Then I got even more worried when I spotted something suspicious as we were boarding the plane. A man stopped to unpack his bag and swung a waistcoat on. Not a posh waistcoat but a sort of modified outdoorsy one with tiny pockets all over it that were filled up with something. I only saw it for a split second but I instantly got a bad feeling, it looked like a homemade bomb and before I could get a better look the man quickly put a jacket over the top. It was very strange and made me feel super uncomfortable but no one else seemed to notice it or maybe they did and thought it was totally innocent so I decided not to say anything…good news is the plane didn’t blow up so I guess it was just a very strangely designed waistcoat. When we landed we just had 5 minutes to make our connection and I was getting very worried until I realised Kenya was an hour back so we had time to run through the airport and arrived just 30 minutes before our flight took off. Phew!

We got a perfect view of Mount Kilimanjaro from the plane and soon after we were flying over the endless Indian Ocean until the little island of Mauritius came into view. Now it’s time to explore this tropical country over the next few weeks.