We tried to stop at the Loir Valley to see some chateaus but the rain was making it miserable with a grey haze blocking the views. But after four days in France we finally had some sunshine so we headed to Château de Saint-Germain-de-Livet, said to be one of the finest chateaus in the Normandy region. 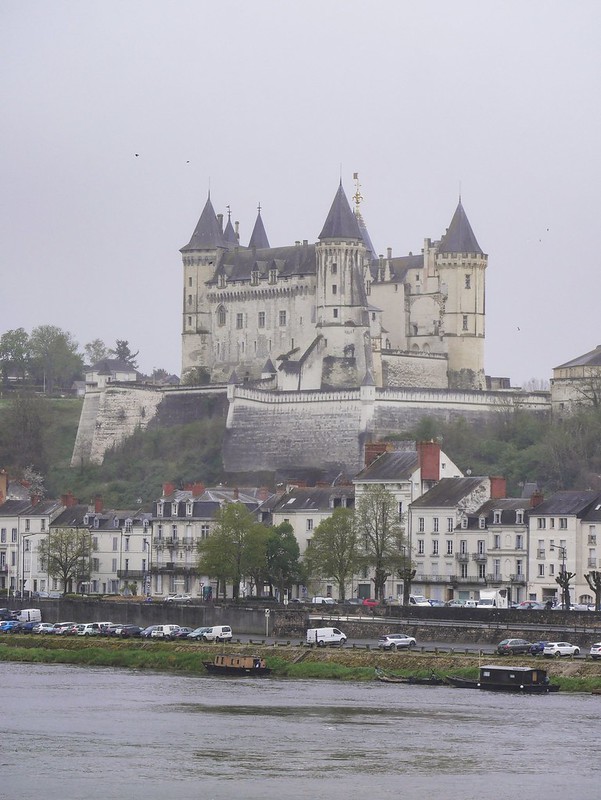 It was closed when we arrived so I was really hoping they were just on a lunch break and their hours were up to date. Luckily bang on two the gates opened and entry to the gardens was free. Stepping through the gate was like entering another world with a fairytale castle decorated with turrets and encircled by a moat. The garden was perfectly manicured with blooming flowers, swans waddling along the lush green grass and peacocks. 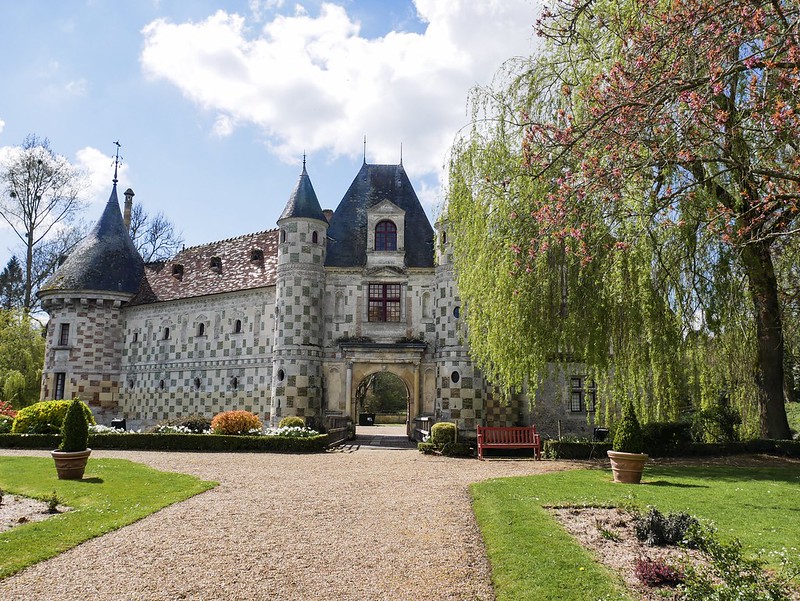 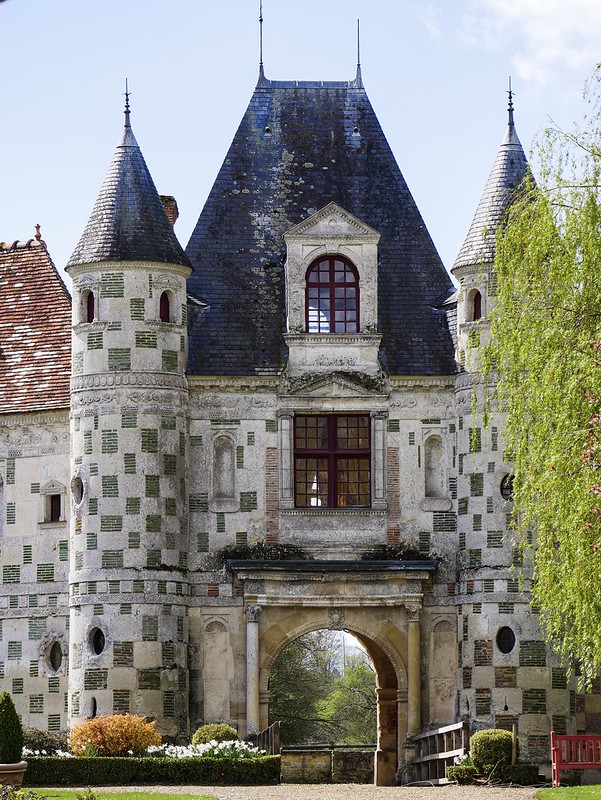 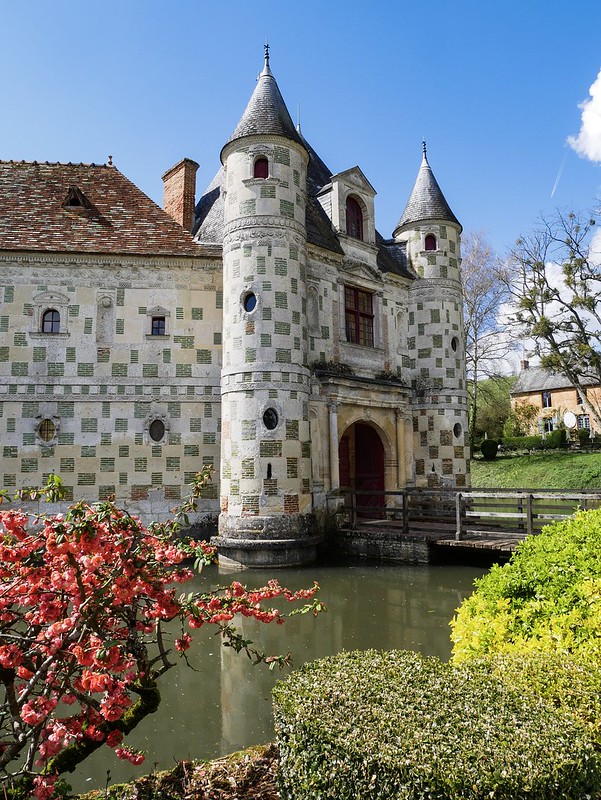 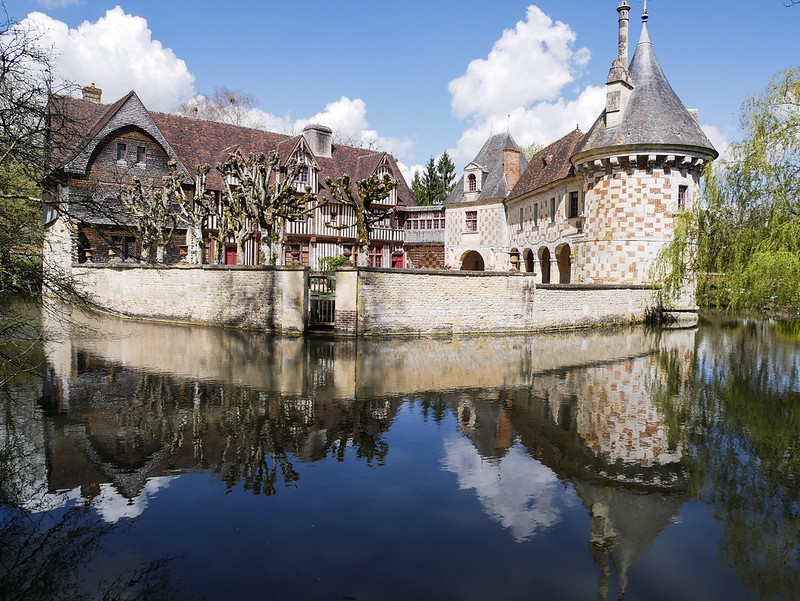 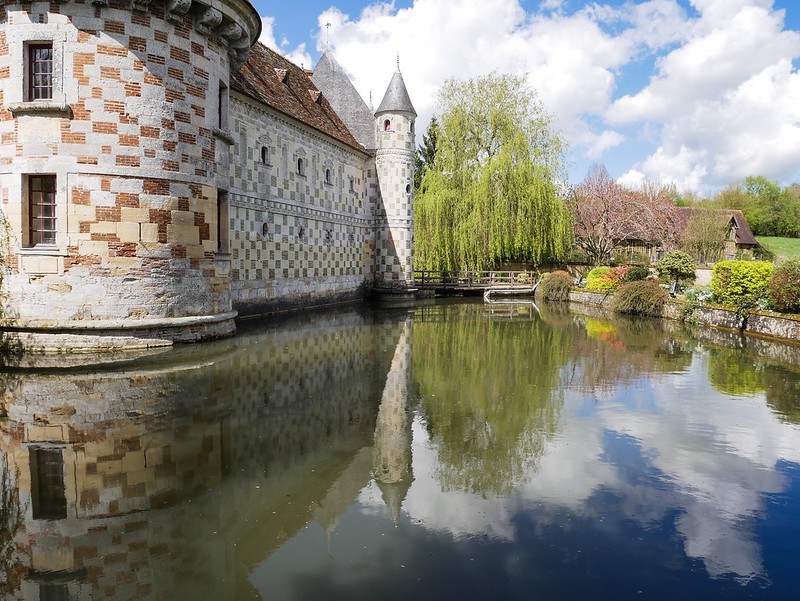 There were two male peacocks with incredible metallic blue necks and long tail feathers dragging along the floor like the train on a wedding dress. There was one albino peacock too which was interesting to see, but it looked more like a swan in a fancy dress. The best part was when the males did an elaborate dance as part of their courtship ritual. Suddenly their train of feathers would open up like a fan with a fabulous blue shield covered in green and white eyes. The peacock would have a little jiggle to ensure all feathers were in the correct place before properly showing them off, turning from side to side like he’s at the end of the catwalk. Occasional he’d walk while dragging the bottom feathers along the floor, it wasn’t a very smooth transition but maybe the ladies approve. We had a lovely little stroll around the grounds and through the courtyard and then we decided the area was so nice an tranquil that we’d stay put and enjoy the afternoon sun in Helga. 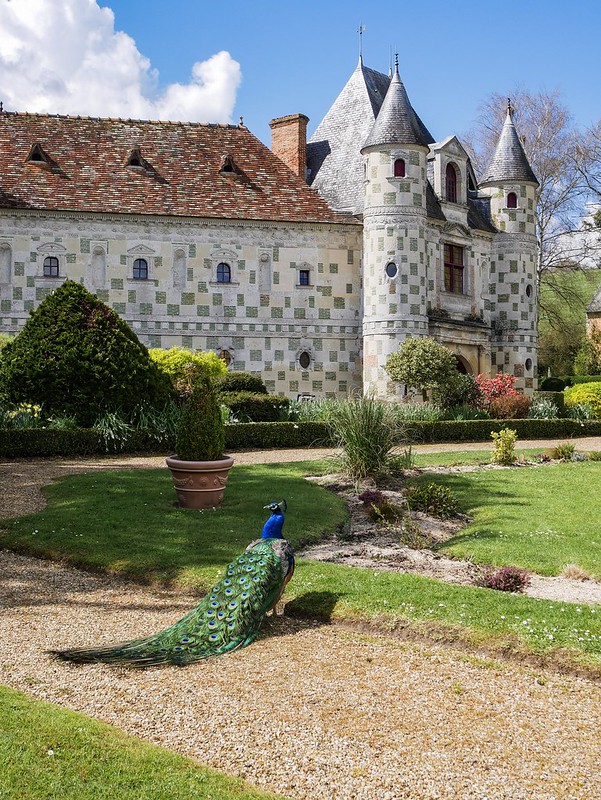 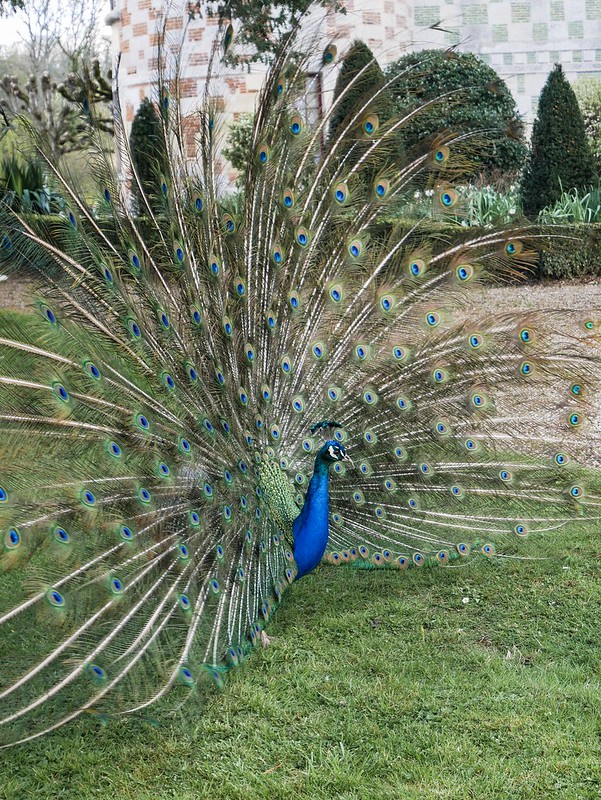 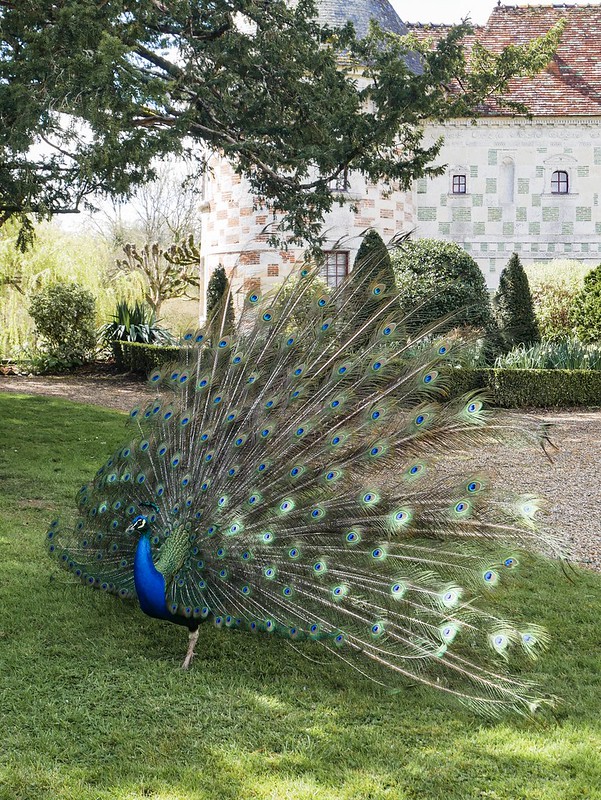 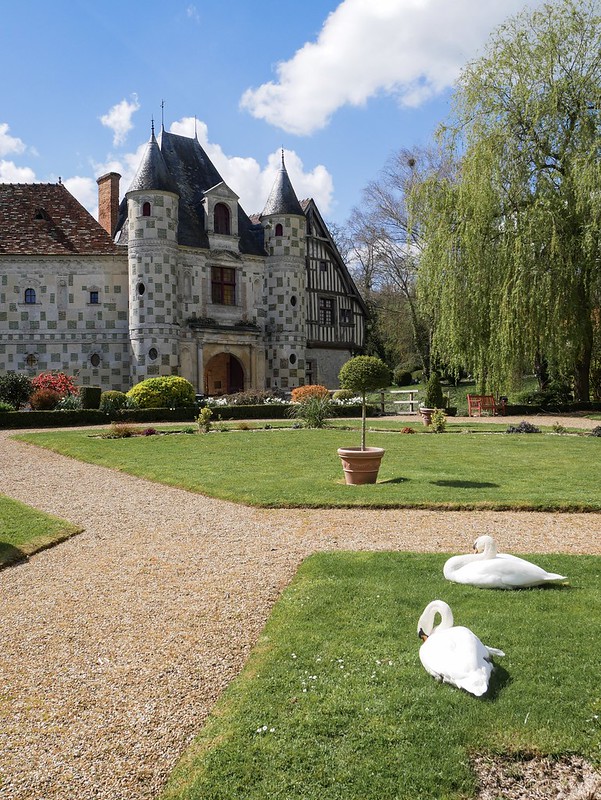 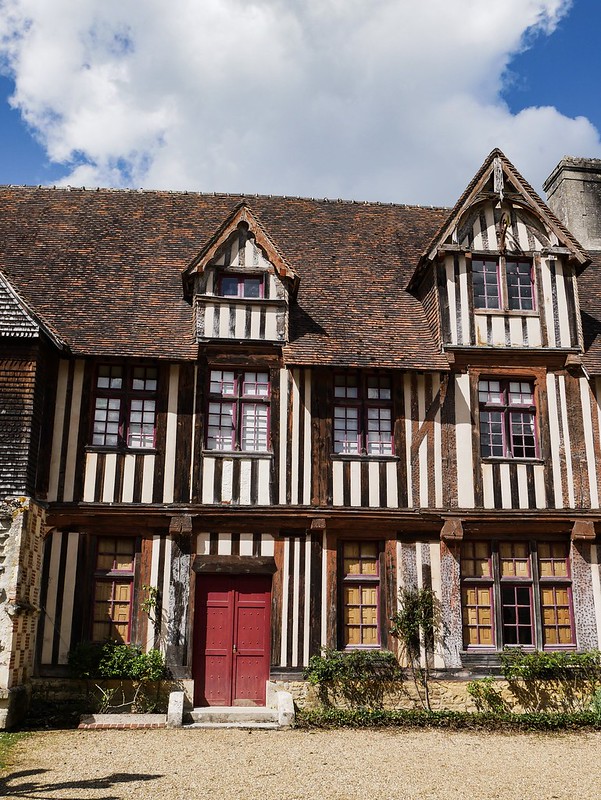 The following day was also great weather so we headed to the coastal town of Honfleur. The town was set on an estuary with a long row of narrow terraced buildings on either side. They were reflected perfectly in the calm water and each one housed a restaurant whose tables spread out onto the promenade. It was absolutely heaving with people, we’re just not used to busy places after how quiet the towns were in Spain but by noon almost every table was occupied. People had huge bowls of mussels and platters of crab while sipping local wine and beers. We were shocked when we saw the price of drinks on the menus, a pint of beer or cider was about €8!! I thought France was supposed to be cheap for booze, that’s why many Brit’s catch the ferry over for the day to buy alcohol and cigarettes. But maybe things have changed and it’s the French coming over to England for a cheap pint now. Even though it was busy there was a nice atmosphere and everyone was enjoying the warm sunshine 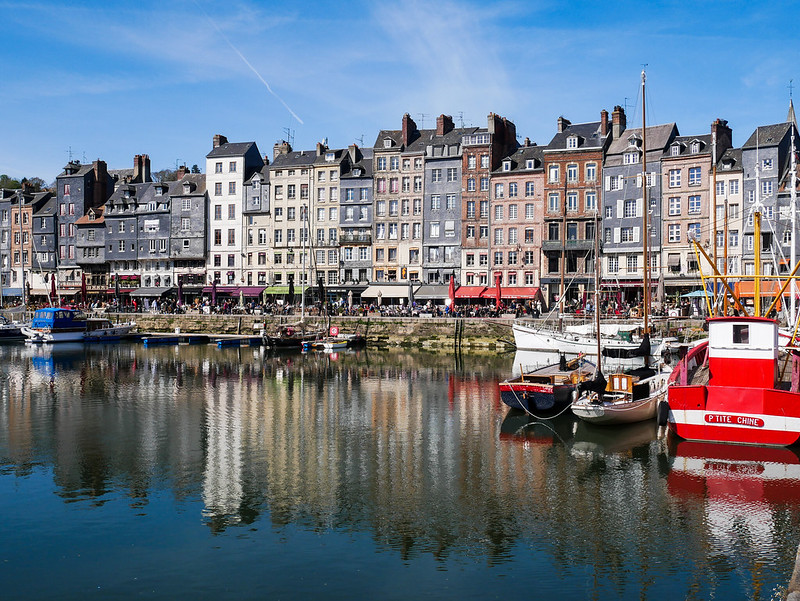 Except for the restaurant area on the promenade we didn’t really know where the main town was so we just wandered up random roads. It was a really cute town actually with many half timbered houses and lots of independent art galleries and shops. We popped into a second hand shop and it was literally just the downstairs room of an old ladies house. It was basically a car boot sale inside her front room, I loved that it was allowed but I was kind of gutted that she didn’t have anything for sale that appealed to me. We wanted to eat out today as we haven’t on this entire trip and we ended up in a rustic ciderie and creperie restaurant. The place was pretty busy but we were served quickly and ordered a jug of cider from the barrel. The jug was a lovely antique looking piece and we had small ceramic bowls to drink out of. We decided to try galettes for lunch which are savoury buck wheat crepes. The fillings didn’t exactly jump out at me, they had Roquefort and nuts but we’ve eaten so much blue cheese in France so that sounded a little sickly, plus I think it needed something sweet like honey or a chutney. I ended up going for goats cheese, cream and chives with some lettuce plonked on top. Craig had a traditional sausage with mustard cream and Camembert. It wasn’t my favourite meal to be honest but nice to try something different and now I know not to order it ever again. 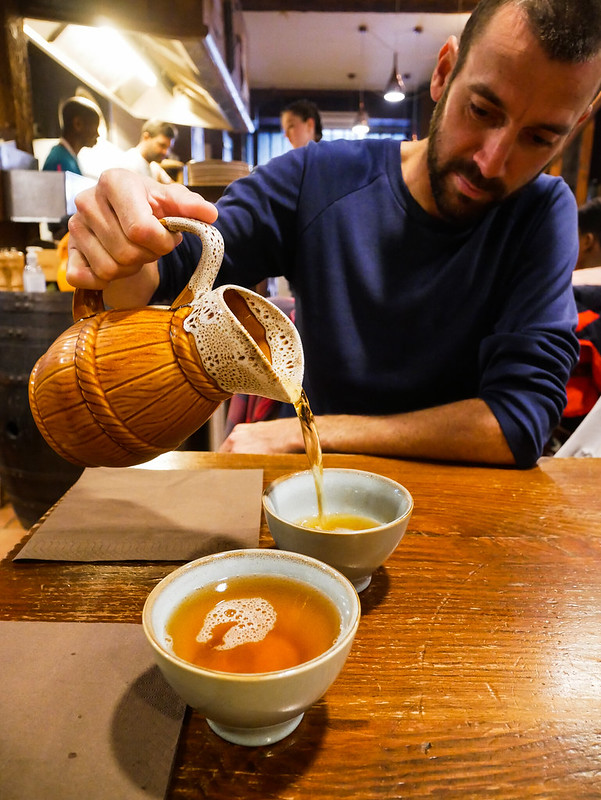 We still had the afternoon spare so we decided to drive to Étretat, a coastal town with some impressive chalk cliffs. The town itself wasn’t anything special in our books but the beach was nice with white pebbles and cliffs at either end. We started with a hike up the right cliff for a view of the famous arch and rock spire jutting out the sea. 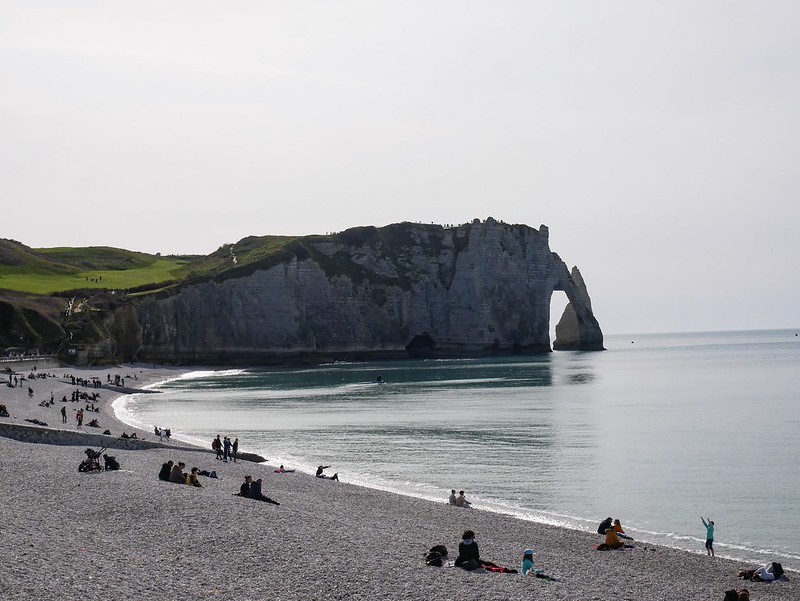 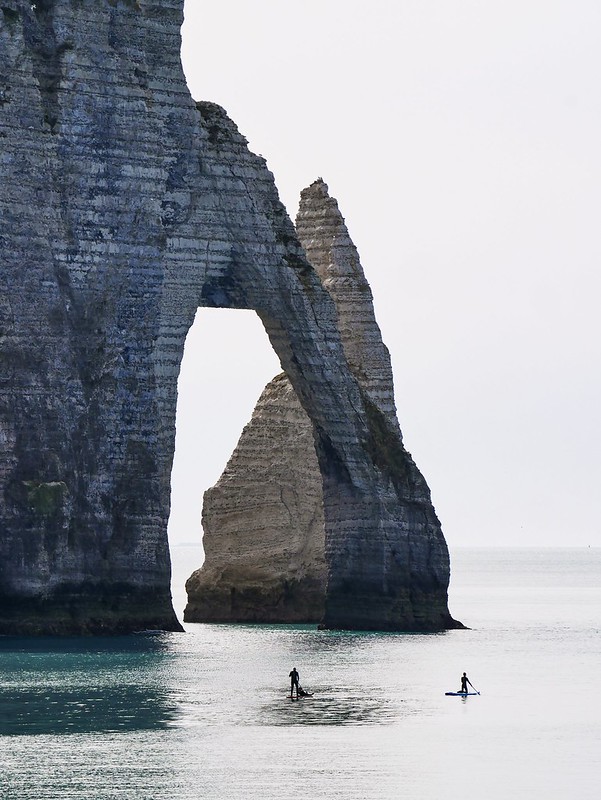 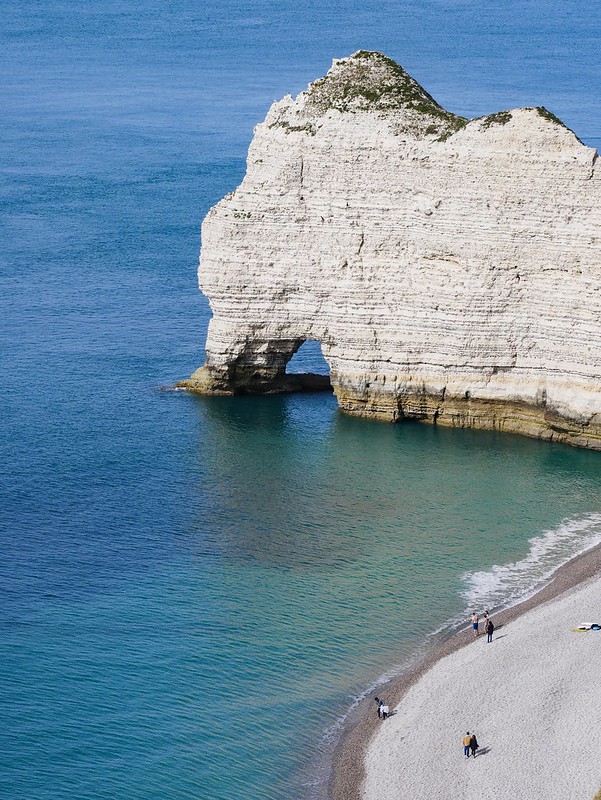 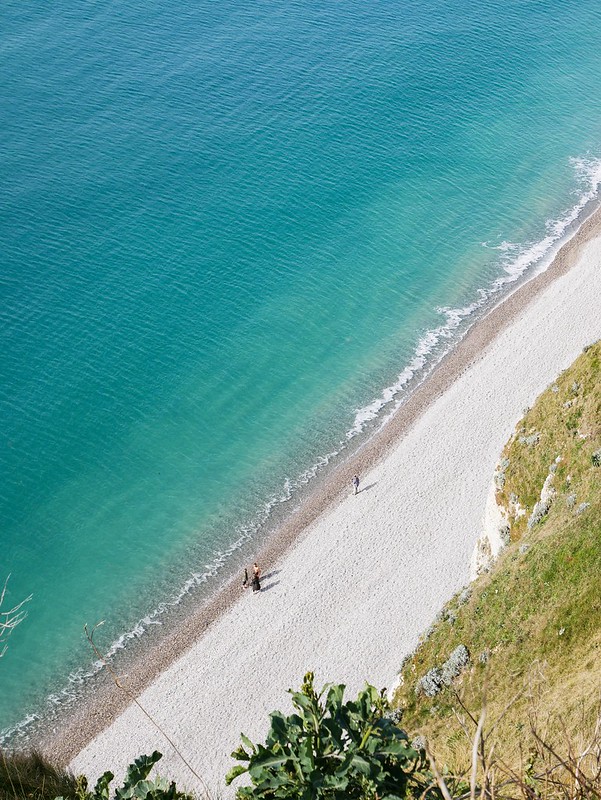 We have scenery like this in Sussex where we’re from in England just across the channel from here. We got a great view of the beach below us with surprisingly clear, turquoise water. Then we went back down to the beach and up the next cliff to get another vantage point. It was a really pretty area actually and the sun was shining which made it even more enjoyable. 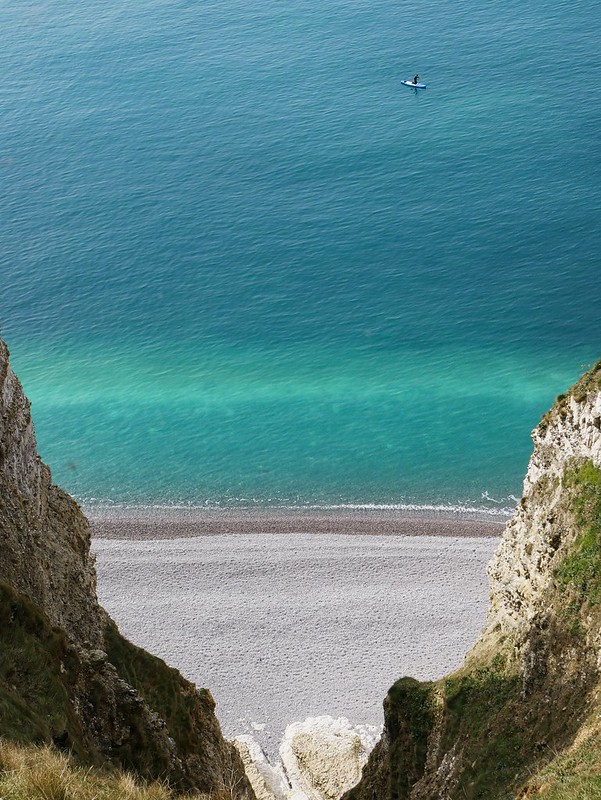 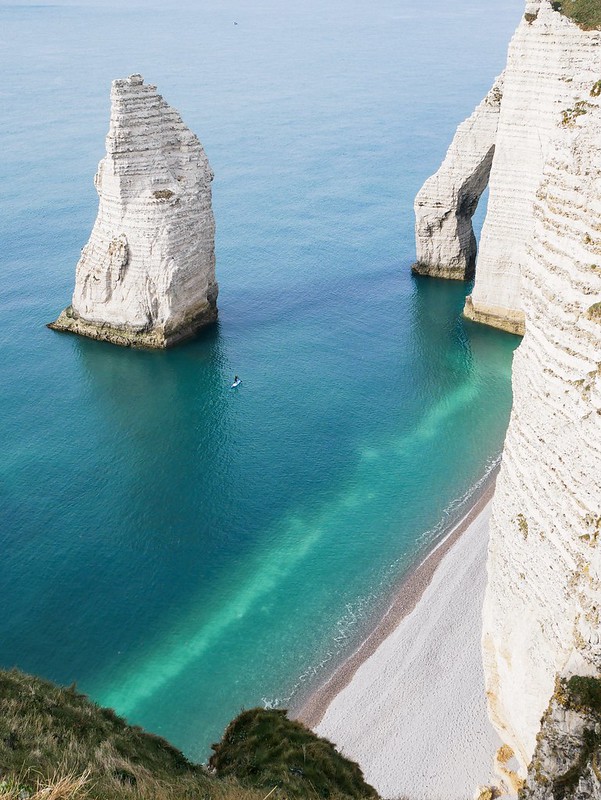 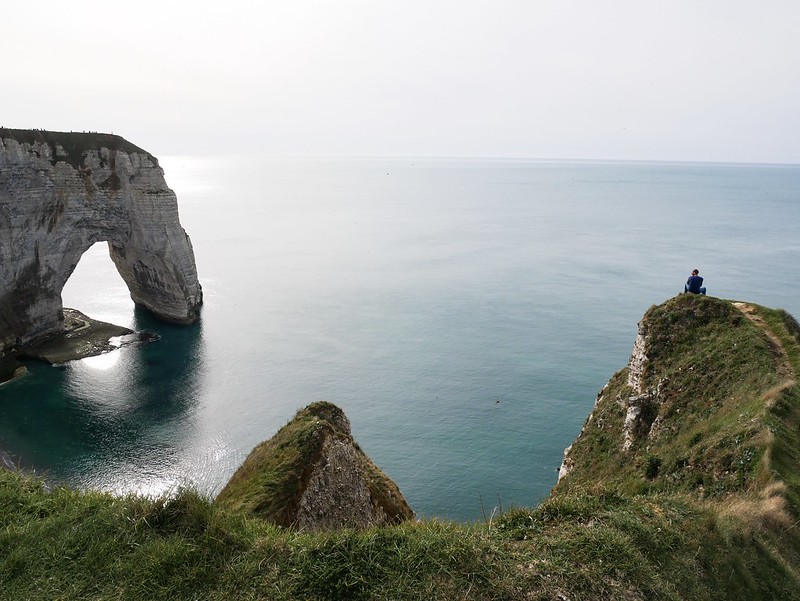 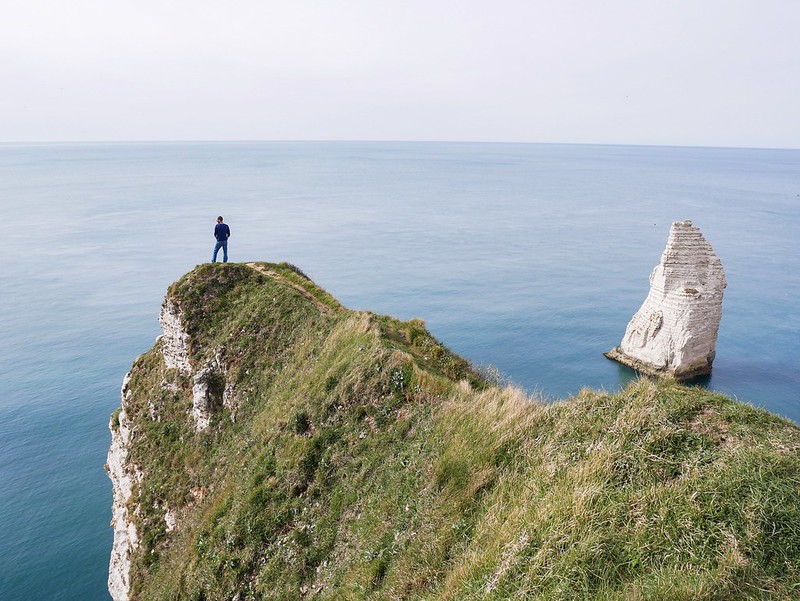 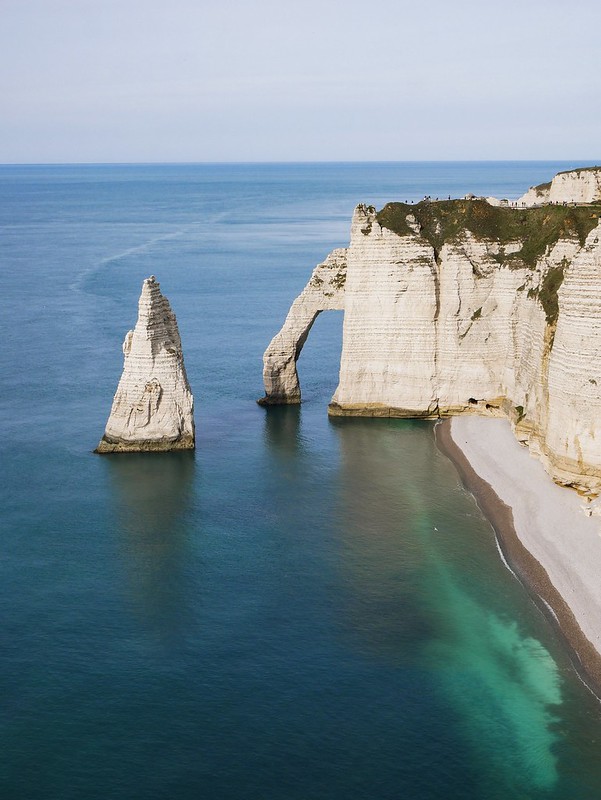 That evening we slept in a quiet gravel car park at the back of a village and just as we were going to bed a car pulled up and then picked up speed, doing a big doughnut on the gravel right by our van. For fuck sake. We’ve managed to avoid any scary situations with humans this whole time in mainland Europe and on our 2nd to last night in France this happens. They left straight away but I was convinced they’d be back to torment us again so we decided to go to a different location which felt safer. We ended up parked up behind a church but it’s impossible to get a good night sleep after something like that happens.

We woke early the next day so as not to piss off the church and drove straight to the coast but we stopped on the route for breakfast by a lovely lake. We were tempted to go for a little swim as the water was surprisingly clear and there was a gravel beach but it was way too blustery and cold for that. We found a nice place for motorhomes to park on a big green field with sea views near Veules-les-Roses and a short stroll led us to the beach with tall chalk cliffs. The village was home to the shortest sea-bound river in France. It’s a mere 1.194km long and it’s used to create pools to grow watercress. I’d read that the village was very pretty but we found the houses a little simple and nothing special but the little river was lovely and clear with fluorescent green algae swaying in the current. Flower beds lined the river banks and rustic watermills spun slowly through the water. 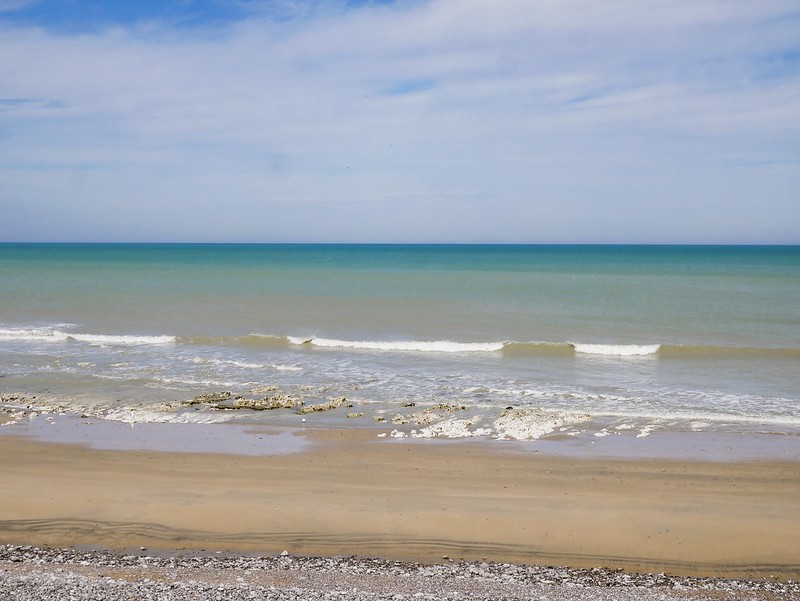 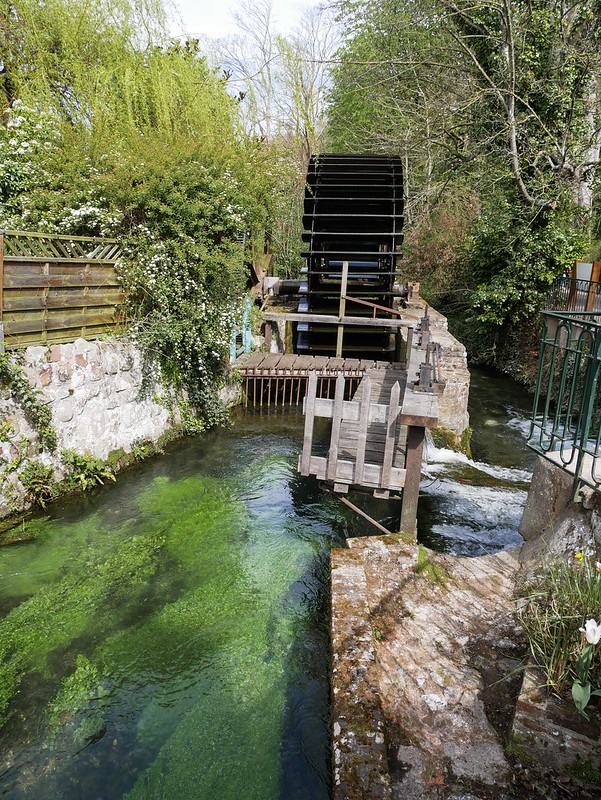 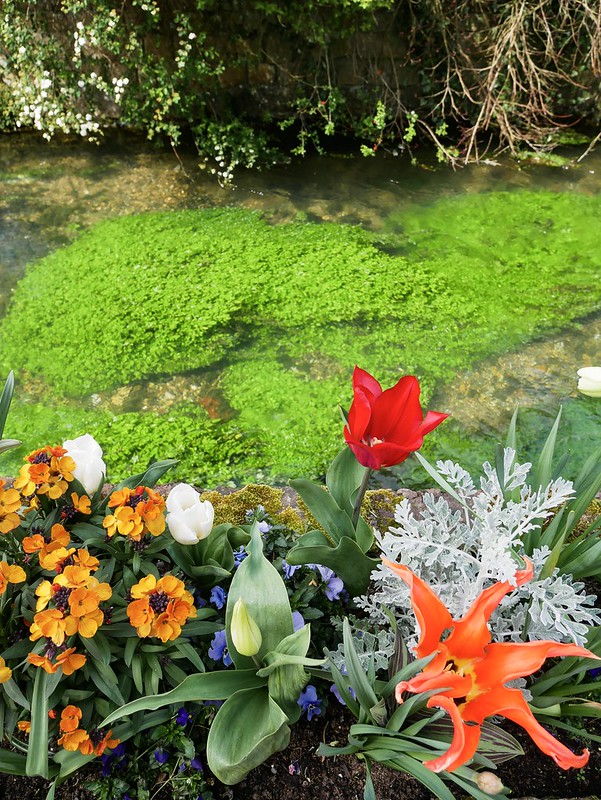 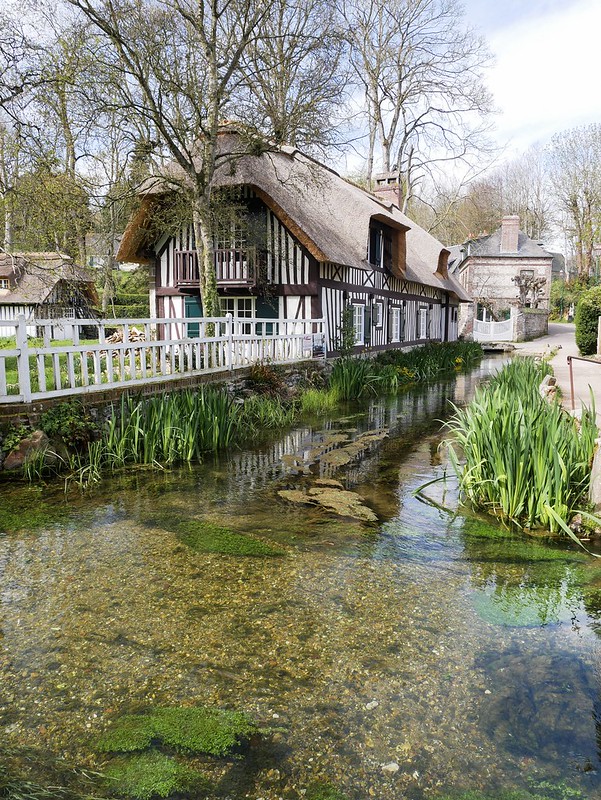 We spent the rest of the afternoon relaxing in Helga, enjoying the warm sun beaming through our windows. It’s our last full day living in Helga so we were happy to be relaxing inside while being able to enjoy the sea view. In the late afternoon we drove to a forested carpark not too far from Dieppe as we had to wake up at 3:15am for our ferry home. I always allocate more time than we need when it comes to travel days – much to Craig’s annoyance. So we made sure to arrive at the port 90 minutes before departure. We had time to make a coffee and pack some bowls, spoons and cereal to eat on the ferry before the queue started moving. After we had our passport stamped out of France we ended up queuing for over an hour as the ferry was delayed. Craig ended up sleeping on Helga’s sofa while I reclined my seat. We were absolutely knackered so we rested our eyes on the four hour journey back to England. The tall chalk cliffs soon appeared on the horizon, it was a bitter sweet feeling, happy to be home but sad that this part of our journey was over. But now we have big plans to sell Helga and go backpacking for the next year. 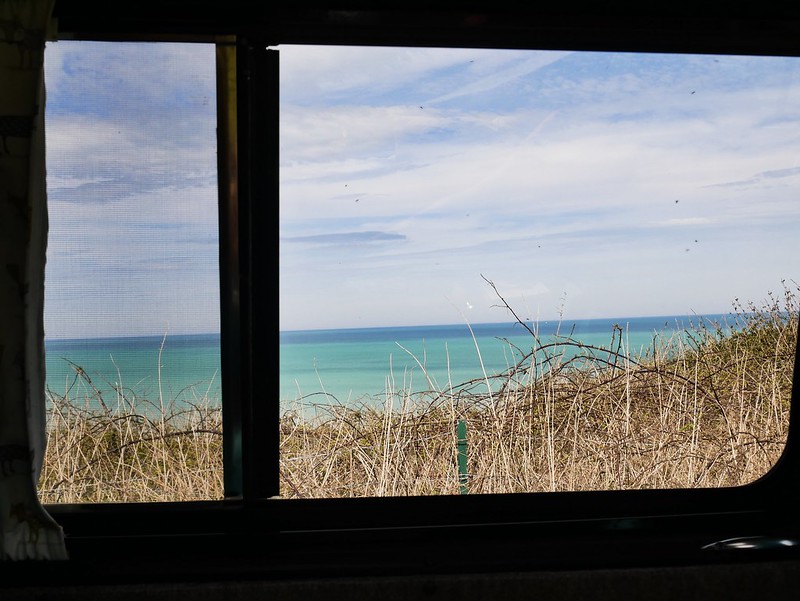 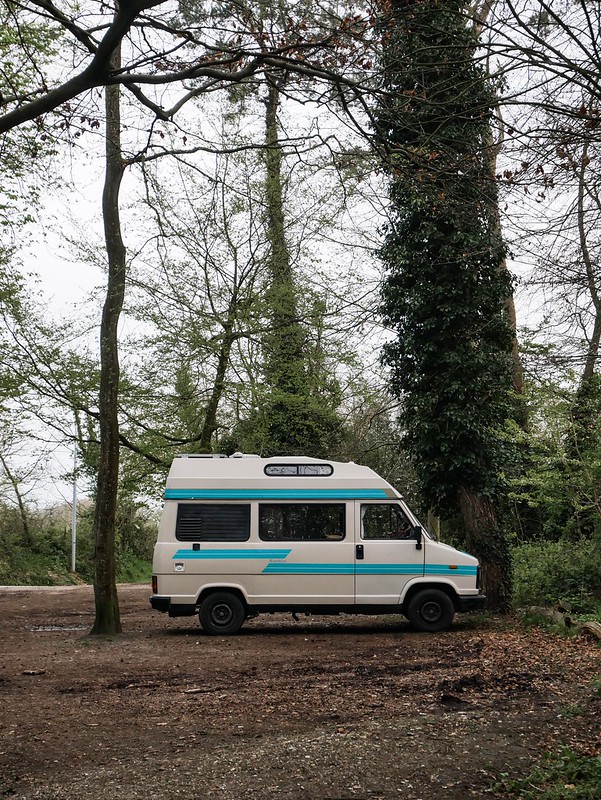