We’ve given ourselves 6 day’s to drive through France to catch our ferry back to England. We’d of liked to of spent longer in Spain but alas the rules after Brexit mean we’re limited to 90 day’s. The border crossing was a breeze and we just drove straight though to the French side. We had a couple of villages we wanted to stop at in the french Basque Country, the first one was Ainhoa. We actually travelled this exact route back in 2014 and I remember this village being very pretty. All of the houses were designed in the same style; a tall white building with red beams, like a candy cane village. Most of the villages in Spain were closed up in winter but here there was life! We popped into a shop that sold espadrilles which I adore and it turned out that this region of France is famous for them. They came in a variety of colours and at just €15.60 I couldn’t resist a lime green pair. 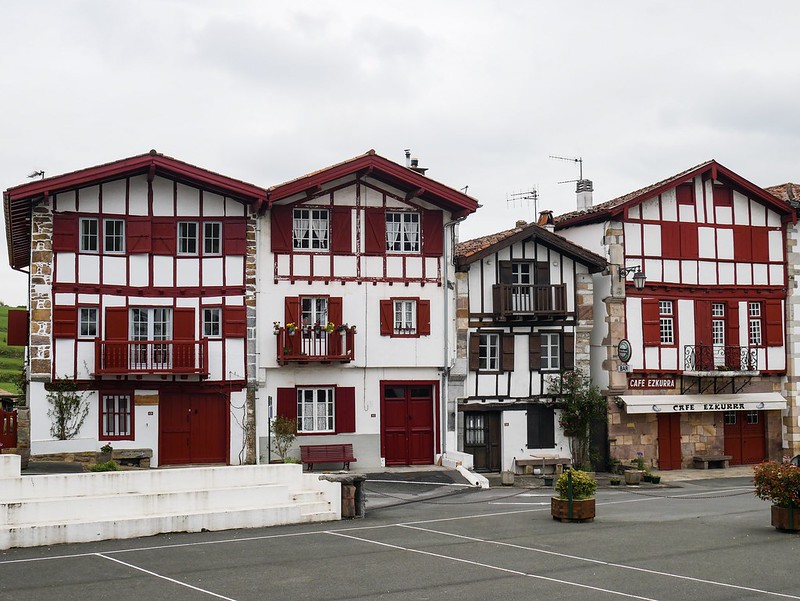 Further down the road was Espelette, a village famous for chillis. Much to our surprise there was a tour bus full of people visiting the village. Every other shop seemed to be selling either cheese, meats, patisseries or foie gras. The latter translates to ‘fat liver’ because the farmers shove a pipe down the ducks throat and force feed the birds to expand their liver up to 10 time more than normal…a horrible practice which is a huge part of french cuisine and culture.

The houses were very similar to those in Ainhoa but here they had dried chillis hanging down the walls. We were delighted to see a farmers market and headed in for a look. I’d love to buy straight from the farmer but my goodness it’s so expensive. A loaf of bread was €6 and last time we went to a farm in Spain we ended up paying €26 for some blue cheese that tasted like goats arse. Feeling a little intimidated by all the kilo price tags we decided to leave and get some cheese from the supermarket where we didn’t have the pressure of a chap with a tilted beret smiling at us and causing us to guilt-buy. 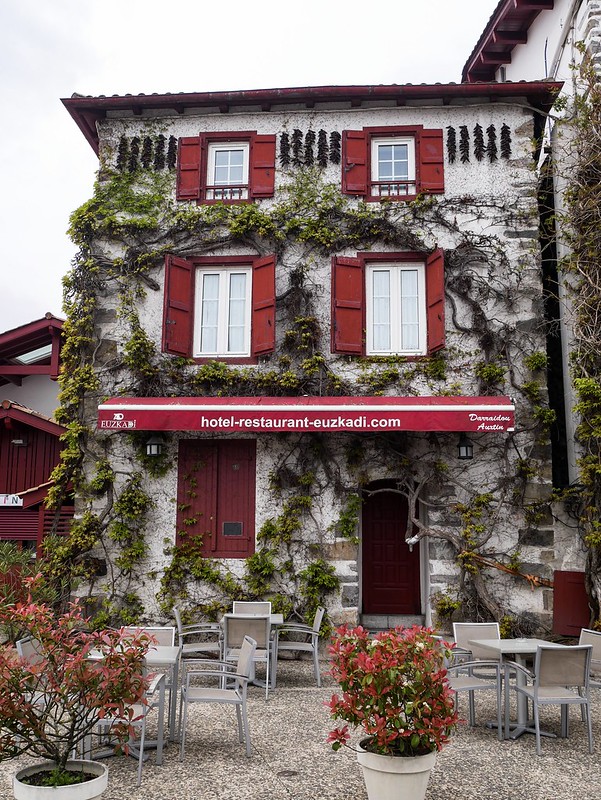 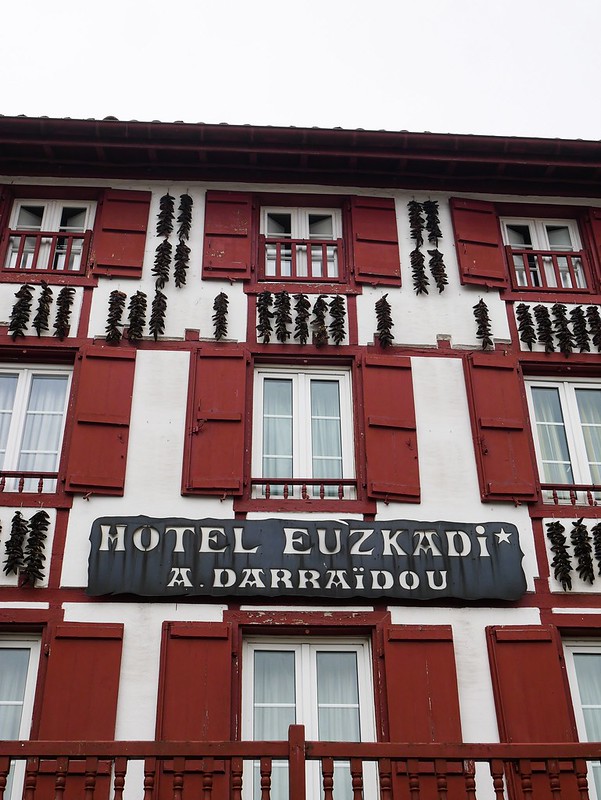 The supermarket was a great success, I know I should support locals but consider the €26 cheese we bought in Spain an annual support. So we got a few variety’s of cheese and of course a french stick, although maybe they just call it bread here? We got a good vibe from the locals in the villages and supermarket with plenty of bonjours and smiles. To be honest we found the Spanish a little unfriendly, I know they speak very fast and it’s sort of like they don’t have time for politeness but they don’t wave to say thanks or sorry when driving, nor do they wave when you stop to for them to cross the road. They also weren’t very smiley and it’s not to do with wearing a face mask because you can tell when someone’s smiling by their eyes. But in France they seemed warmer.

The rest of the day was spent driving north for a few hours until we arrived at a little picnic spot in the countryside where we could camp. There were chickens wondering around our van and a couple of curious cats too. One thing we’ve noticed in France is how many Aires they have, which are basically rest areas and places to camp. Many have free facilities like water, dump stations and toilets, albeit none of the toilets have seats or loo roll which is strange.

The next couple of days were spent endlessly driving. France is absolutely massive and rather flat and boring to drive through, of course the alps and Pyrenees are a different story but they weren’t on our route home. We passed endless fields of yellow rapeseed and rain clouds kept us wet most of the time. At one point the heavens absolutely opened and our windscreen wipers could barely keep up with the rain. We were also pulled over by the cops one day but it was such a strange experience. We were passing through a town and suddenly a man stepped into the road and ushered us to pull over. I quickly grabbed Craig’s phone from the dash which we use for a sat nav as I’d read online that it’s illegal to use speed camera detectors in France and it can carry a £1500 fine and points. But I just couldn’t find a way to remove the function from our map when we arrived in France. We drive a 1989 van so we’re pretty slow on the road and speed cameras have never been a worry for us so every time our damn gps beeped to say camera ahead we’d wince and tell it to shut up as we didn’t want to know. So I really didn’t want the cop to see that and we didn’t actually know why he pulled us over.

The officer asked in french is we spoke French and instead of saying no Craig just went into automatic mode and said “Parle vou angles?” Which is do you speak English. And the cop didn’t like that one bit. So we had to really suck up to him from that point. He spoke English and said “in your country do your policeman speak French?” to which we said no and we quickly complimented his English and laughed that it was a lot better than our French. He didn’t laugh back. Then he asked for Craig’s drivers licence and ownership documents. I was starting to brick it a little and he took Craig’s license across the road to his unmarked black car to get his colleague to check the system. Next thing we see is he starts the car and begins driving off and suddenly we start wondering if we’ve been scammed, was he actually a cop or just a civilian in a jumpsuit with a fake gun at his waist? I don’t remember seeing any police logos and we certainly weren’t shown a badge or anything. Thankfully he turned around and parked next to us but when he got out he looked at us as if we were in big trouble, blowing his cheeks out as if to say ‘do you want the bad news or the really bad news?’ Then he said something in French and the only word we understood was international and suddenly we thought oh fuck we didn’t realise we needed an international license to drive in France. The licence is an absolute joke, you get it from the post office for £5 and it’s literally a piece of folded cardboard with your photo on it and it expires after a few years. The cop must’ve seen our panicked faces and began laughing before handing Craig’s license back and saying “ave a good trip!” and that was it!!! So weird! So we drove off and after 100m Craig said “I feel like they’re following us” it was hard to see behind the other cars but we realised Craig was right. Seconds later their black car honked a few times and sped past with the two cops waving and smiling at us. How bizarre!