We based ourselves near Illa de Arousa, an island connected to the mainland by a two kilometre bridge. It was built in the 80’s so before that inhabitants and visitors could only access the island by boat. We found a great little place to camp which was west facing so we had a fantastic view of the huge golden sun slipping below the horizon and the sky glowing a deep orange colour. 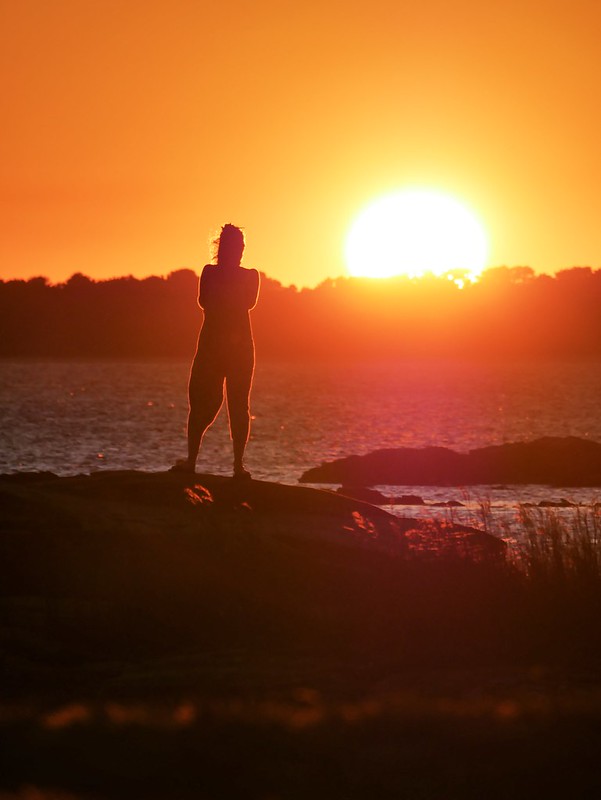 The next morning we drove onto the island and headed straight for the southern section which is a protected nature reserve. There was a forested headland with beaches tucked into nooks and crannies, in fact the 5km walk would take us past 17 beaches. I discovered this area by spending hours on google earth and it’s one of the main reasons we did the long drive to the west coast of Galicia so I was really hoping it would live up to my expectations. The sun was shining and after a couple of windy days it finally felt calm and warm again. 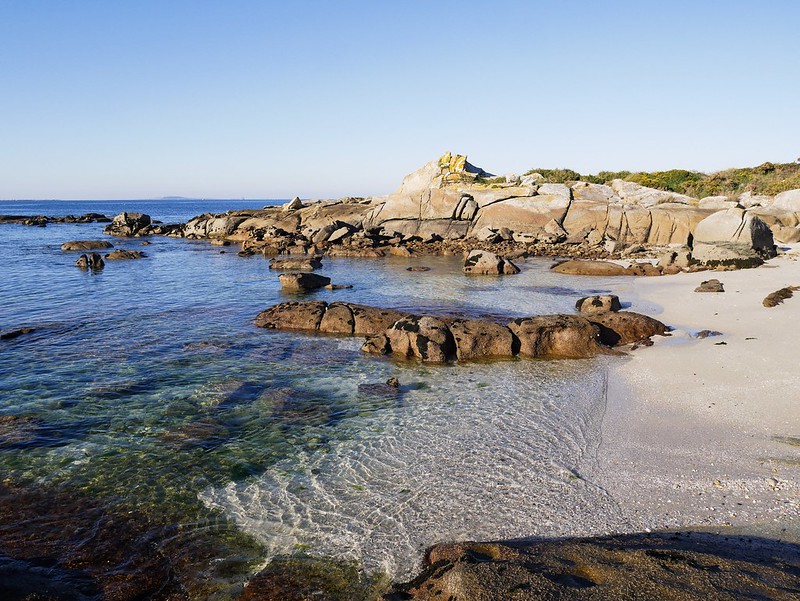 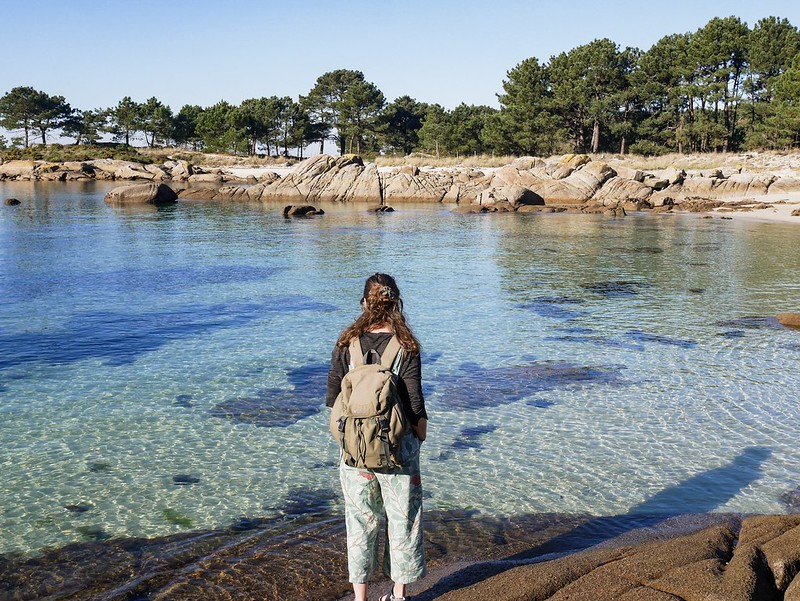 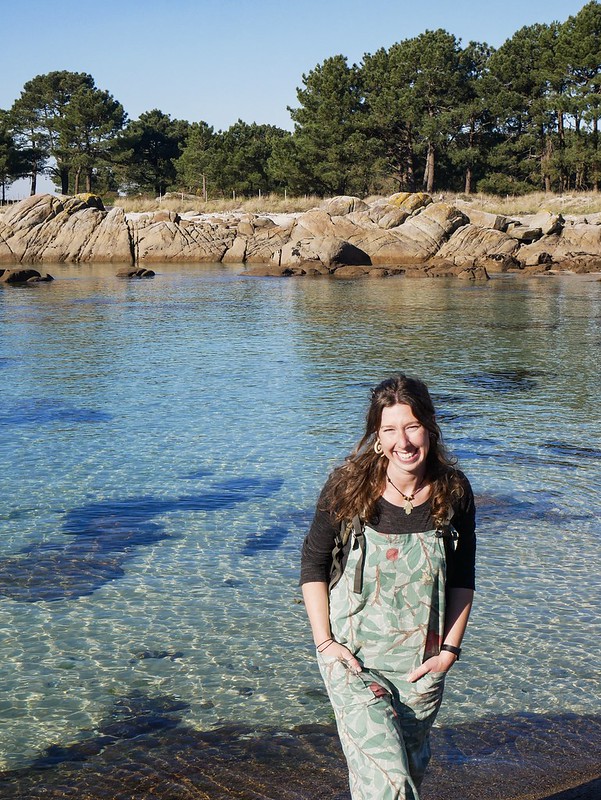 It was about an hour after high tide so the beaches looked wonderful. As we walked along sandy tracks and rocky headlands we stopped to admire all the beaches. In the south of the island they were totally protected from the sea breeze and the water was like glass and twinkling in the sun. Some beaches had seaweed washed up on the shores while others were just pristine white sand. We found a perfect beach which just looked like paradise and there was an amazing section where giant boulders created a deep channel with turquoise water. We decided if we didn’t find a nicer beach we’d come back to this one later for a picnic lunch. As we walked around the west and north the winds picked up but the beaches still looked stunning and best of all we hardly saw a soul. 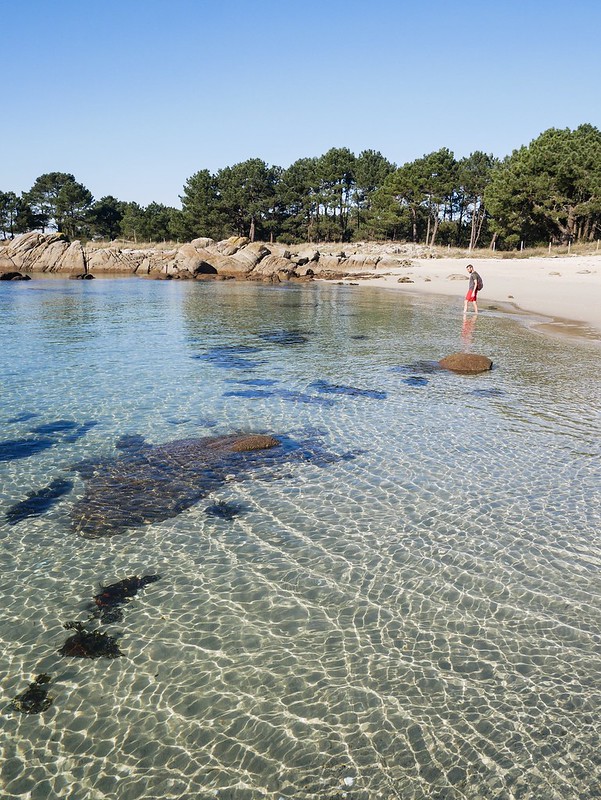 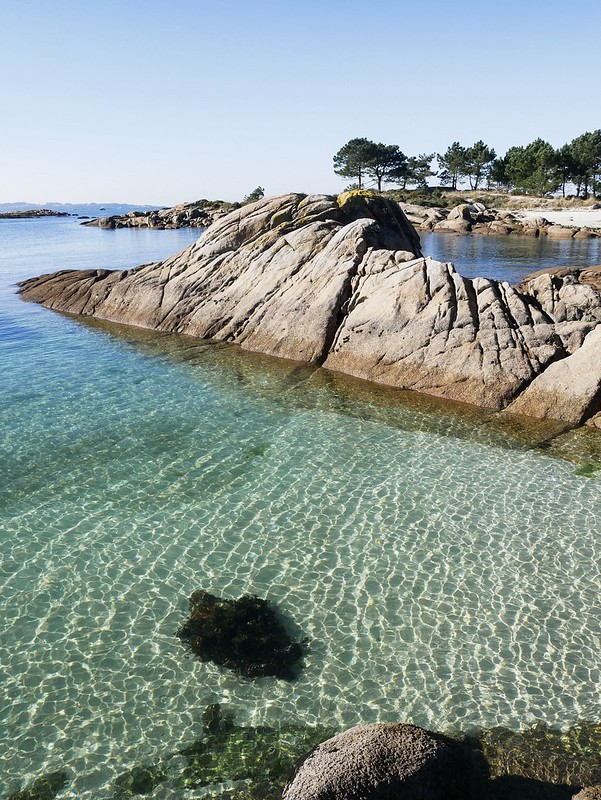 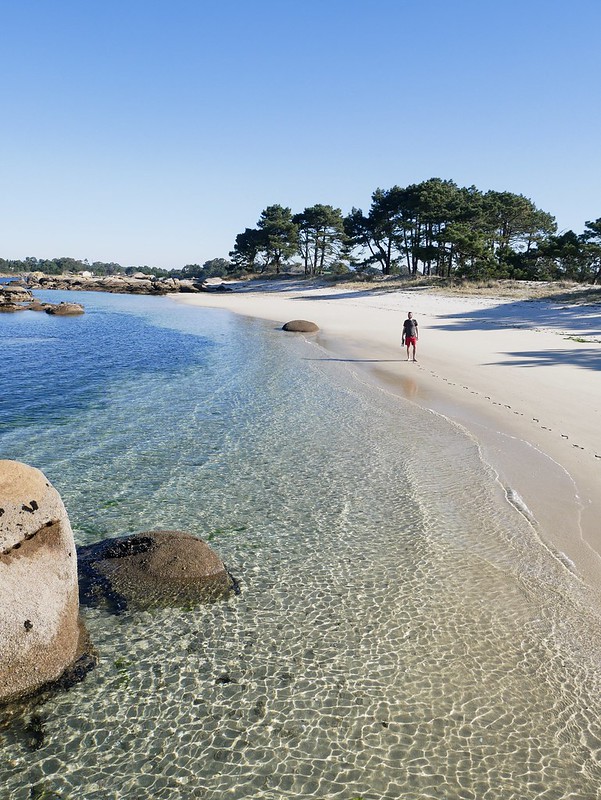 As expected our first favourite beach was the winner so we took an inland path back to it and enjoyed lunch on what felt like a private beach. The tide was going down and by the time we warmed up enough to consider a swim it didn’t look quite as appealing so we just sunbathed for a few hours. It felt so nice to have the warm sun on my face, like I could feel myself gaining all the vitamin D instantly. We finally headed back to Helga, five hours after we started the hike and were shocked to see the beaches now. The sea had all receded so all that was left in the previously picturesque coves was a thick layer of seaweed and rocks. They looked awful and we laughed at how different an experience can be depending on when you visit. 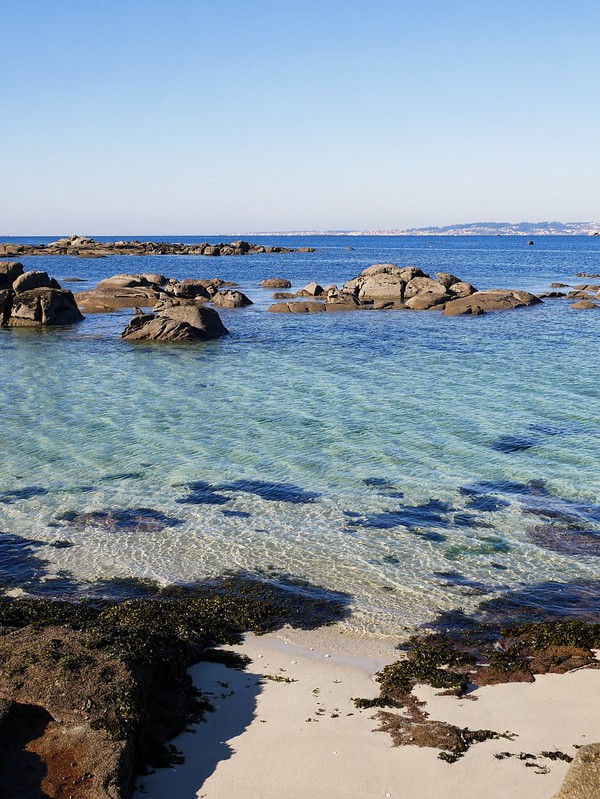 We headed off to find a nice place for a cup of tea and went all the way up to the north west corner of the island. The road was awful with regular speed bumps made of stone strips. The road was lined with tall pines but through them we spotted a dreamy looking beach. It was so calm and the water was crystal clear, it could of easily been mistaken for a beach in Asia. After a cup of tea in the van we decided it was too nice of a beach to not go for a swim. As usual it was unbearably cold but I quickly became used to it and managed to spend a long time bobbing in the water. 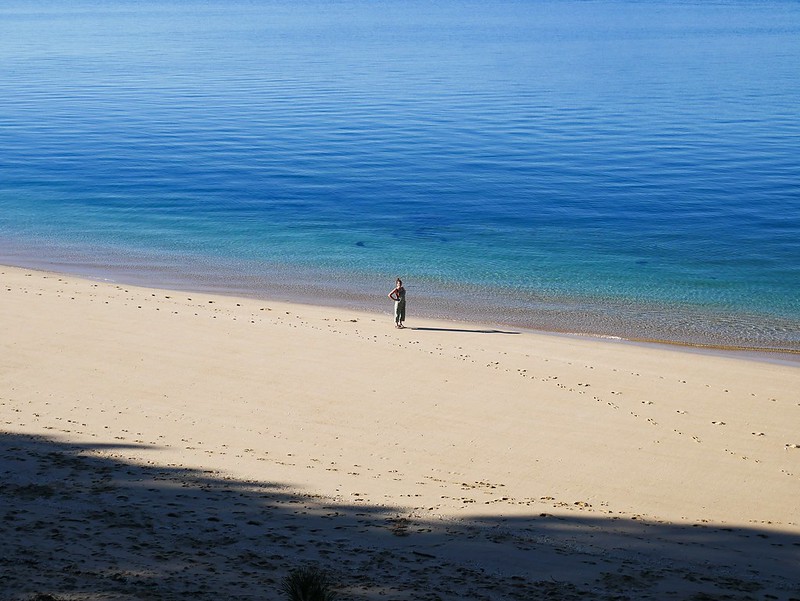 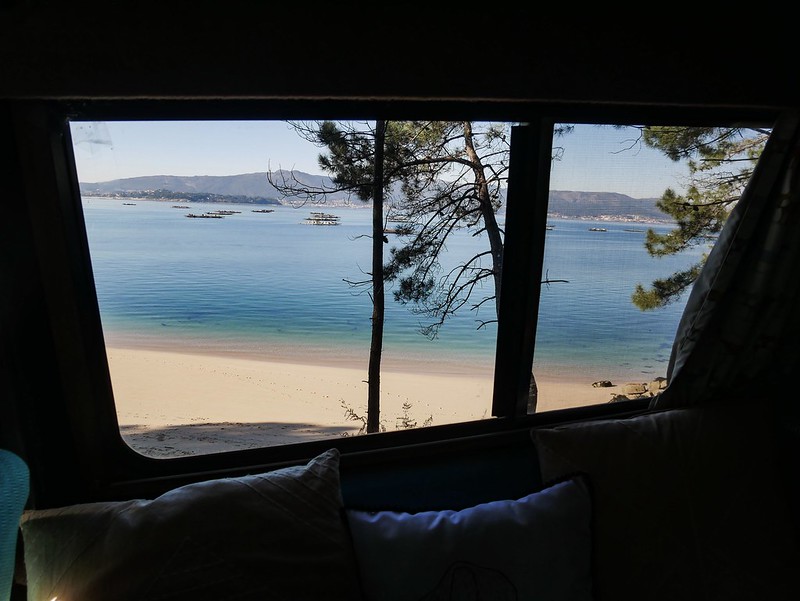 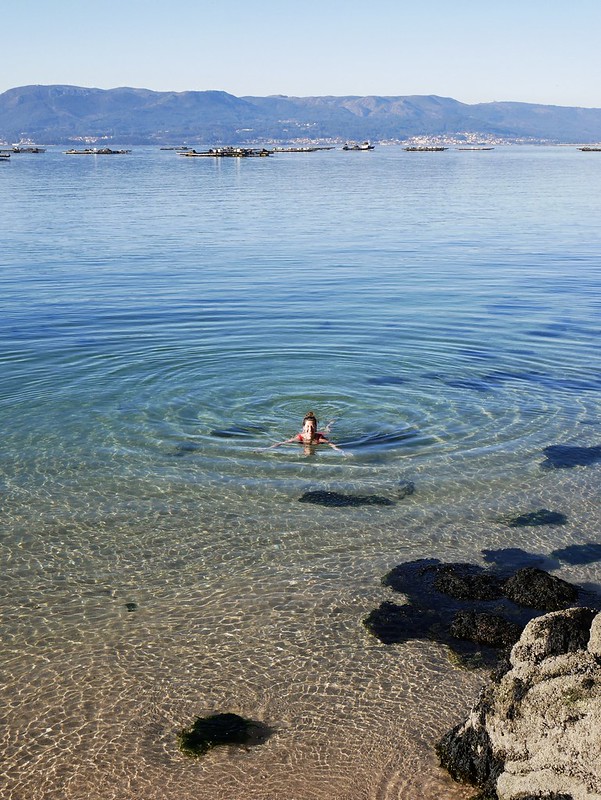 We parked in a much flatter spot nearby which was just a pullout beside the road but it was west facing with a sea view so we decided to stay there for the night. We had the side door open and the sun pouring in, which made looking outside a little tricky as it was glaring but as I peaked up I spotted a dolphin just 10 meters from the shoreline. I quickly grabbed my camera and forced my eyes to try and focus on the sea around the bright sun which was reflecting off the glassy sea. We spotted about a dozen dolphins in the end, they just kept appearing and some of them were giving us a right show with big jumps. There’s something pretty special about photographing dolphins from your home on wheels. 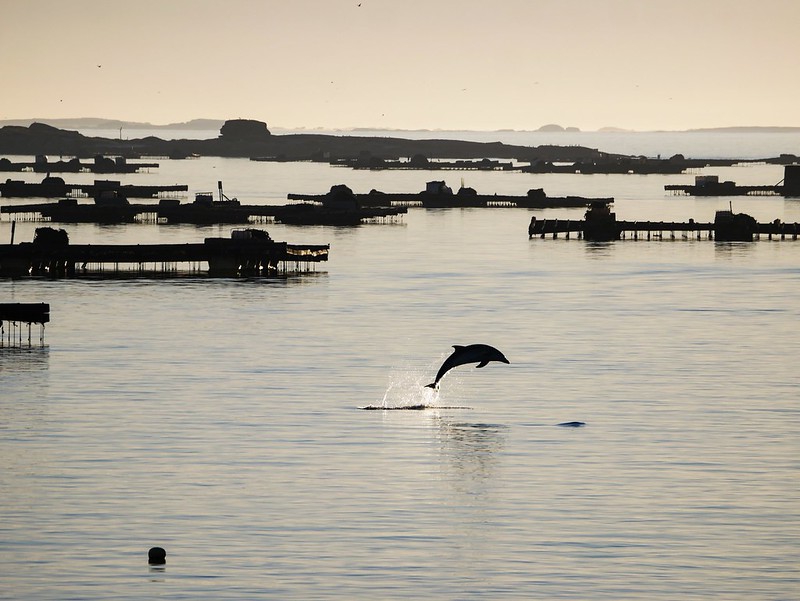 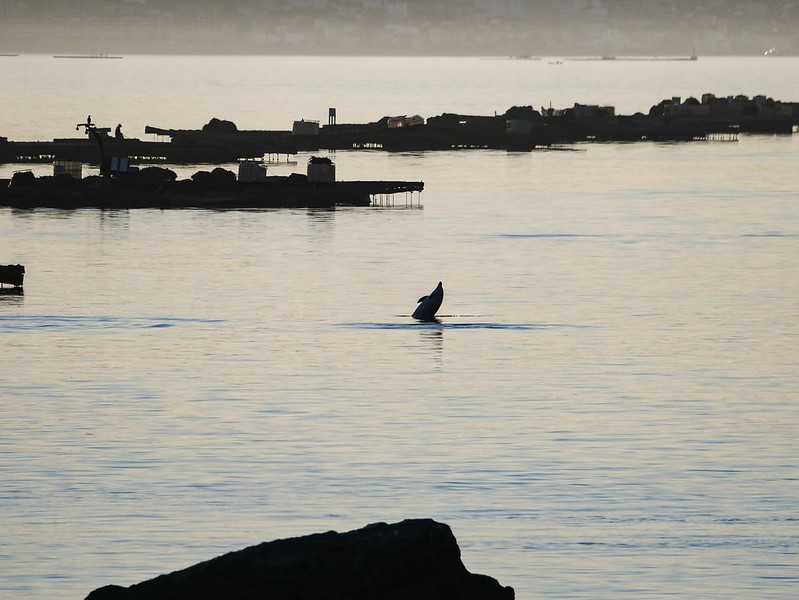 The sun gradually dipped below the horizon and even an hour later the skyline was still glowing a magnificent orange colour which faded into a deep blue. As stars began appearing Craig remembered he wanted to download an app which shows you the international space station flying by and suddenly he said “oh it should be flying past us any minute now, it says visible in the west, heading south!” which was exactly our position and then we spotted a light gliding effortlessly across the royal blue sky. After a few quick discussions about whether we were witnessing a plane or the space station we established it was in fact the latter which resulted in me cracking out plenty of sarcastic remarks about how anti climatic it was “make sure you set a reminder for when it passes by again next week Craig, I don’t want to miss it!” 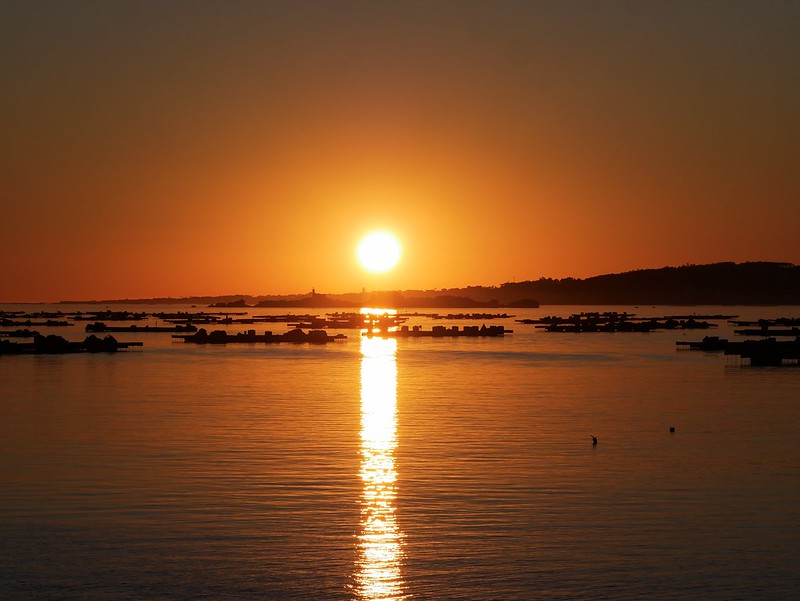 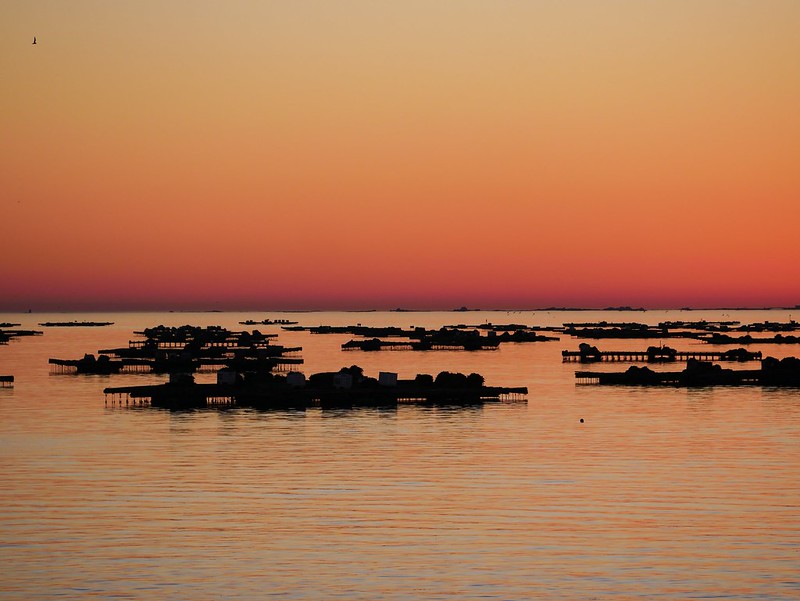 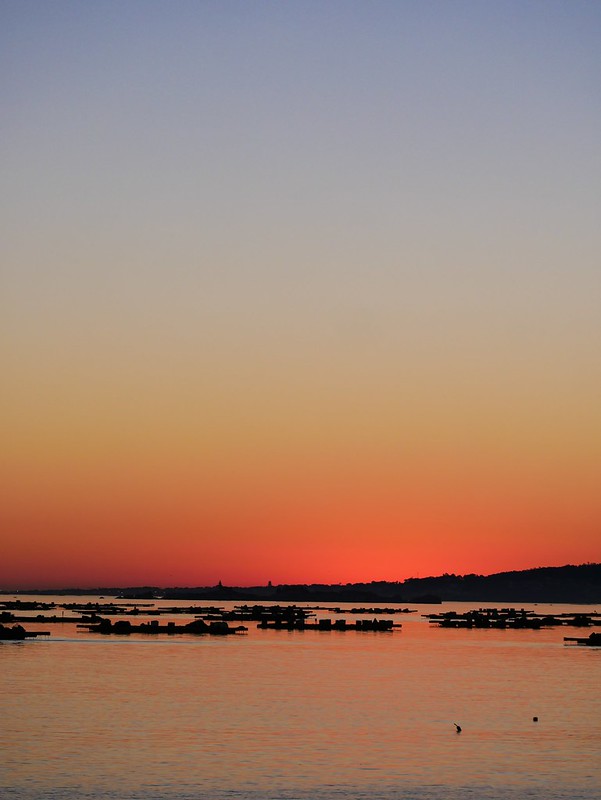 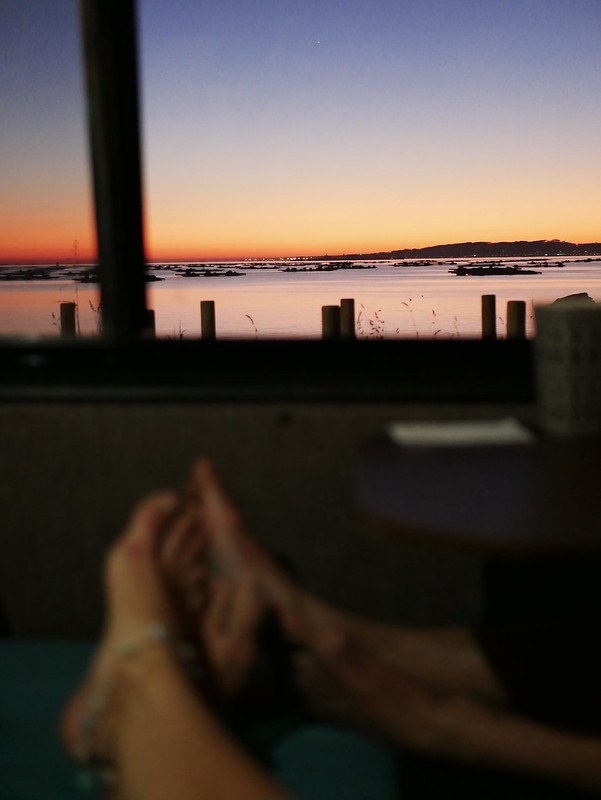 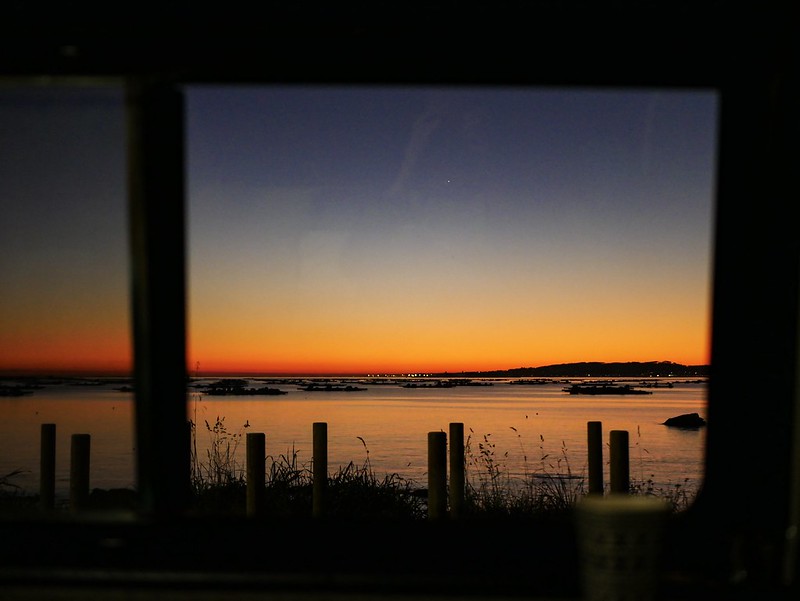