It’s a 1000m elevation gain to reach the Covadonga Lakes in Picos De Europa National Park. I instinctively said no to it, even though the area looked beautiful it didn’t seem worth pushing our campervan up such a steep road. We decided to head up a tiny bit of the road though to visit the 19th century Basilica which was really impressive with a rusty red exterior. It was built on a hill in the middle of a valley and tucked between soaring mountains. Nearby was a very popular sight amongst pilgrims, a cave where Mary supposedly appeared and now it housed a little chapel with a small waterfall and emerald pool beneath it. 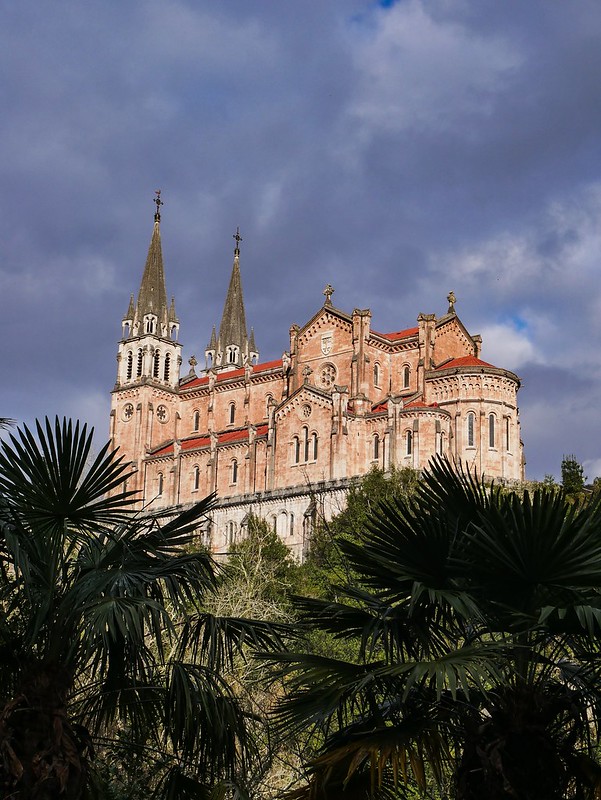 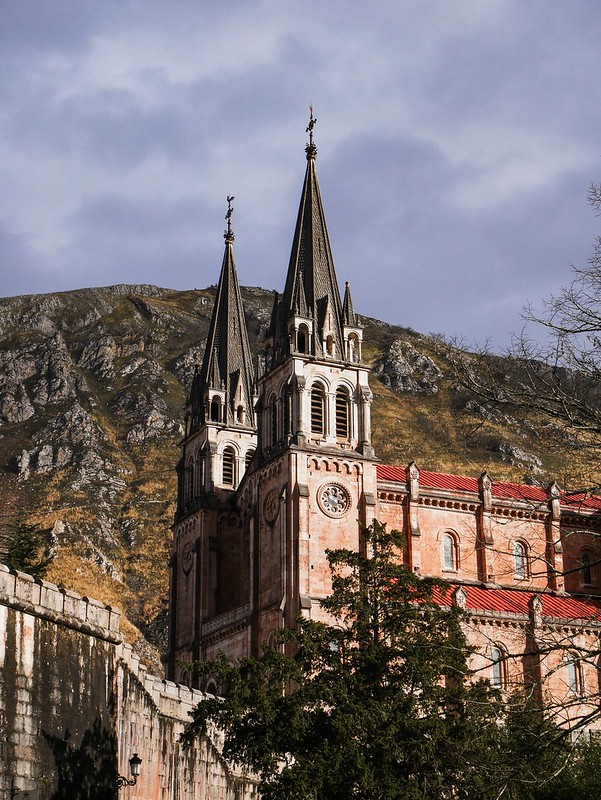 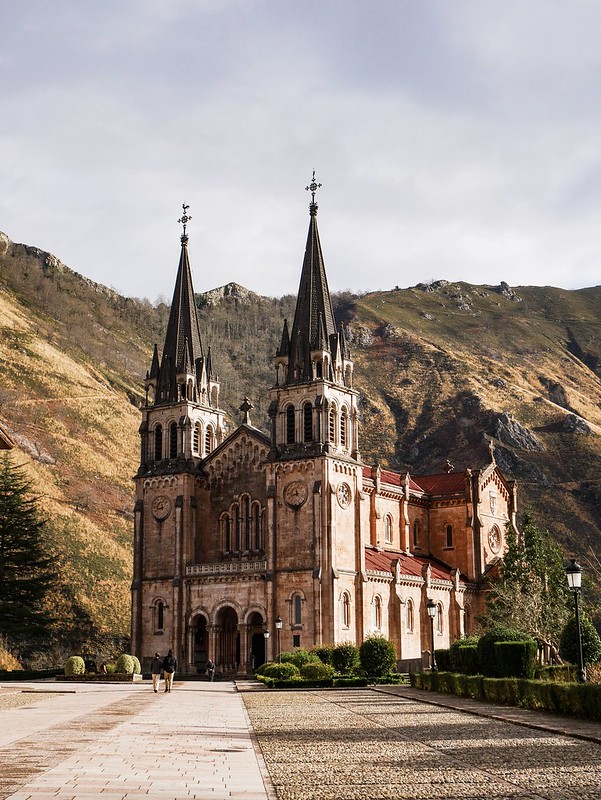 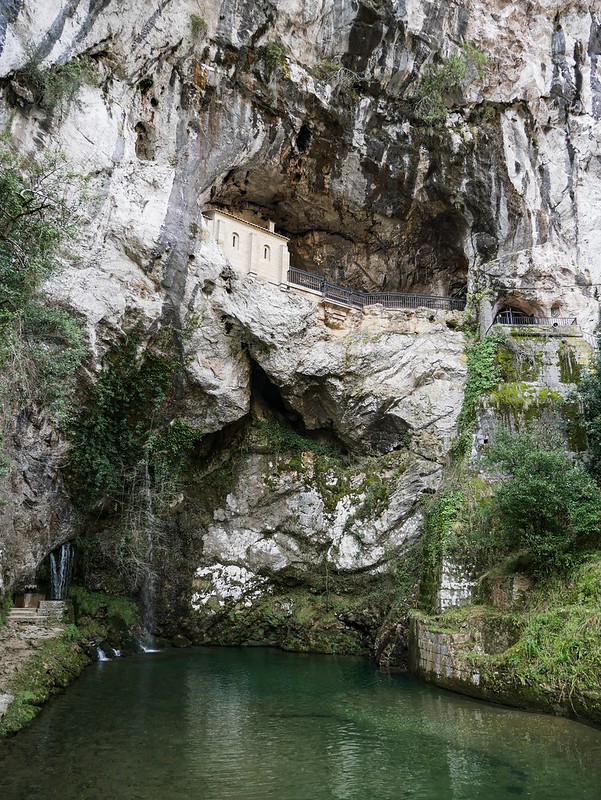 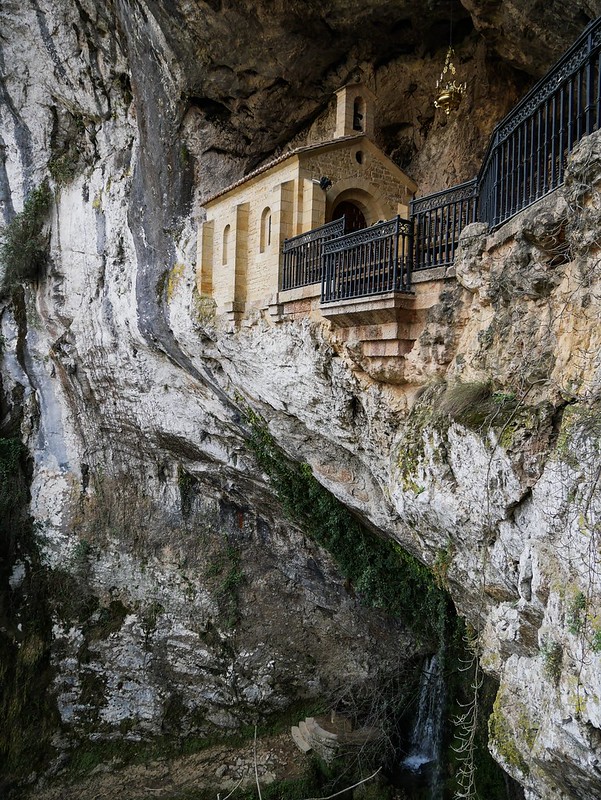 We peeked up the mountain road, pondering if it was worth the drive. It was a rare cloudy day and already 12pm so we felt like it would be a bit foolish to go up now and not have a full day. The sharp hairpin bends were our biggest worry but after having a look on google earth we decided to just give it and go and try to turn around if it was awful. So off we went, up four hairpin bends without any problems and we thought that was the worst part over, but that didn’t happen until we reached a long straight section that climbed at a cruelly steep gradient. As if it wasn’t labouring enough we had to brake for a pig and then some goats crossed the road in front of us which meant we lost all our momentum. After that we were plowing up in 1st gear at a whopping 10mph. The road just kept climbing up, turning round bends and continuing steeply uphill. As we were getting closer to the top thick fog swooped in and the road even had ice and snow across it. Geez! Maybe it was a bad decision to come here after all. But Helga made it with no quarrels, we just like to give her the easy life. There was a huge car park with only 15 or so cars in it, for most of the year they have a shuttle bus service with no private vehicle access after 8:30am so we were happy to be visiting in winter without any restrictions or crowds. 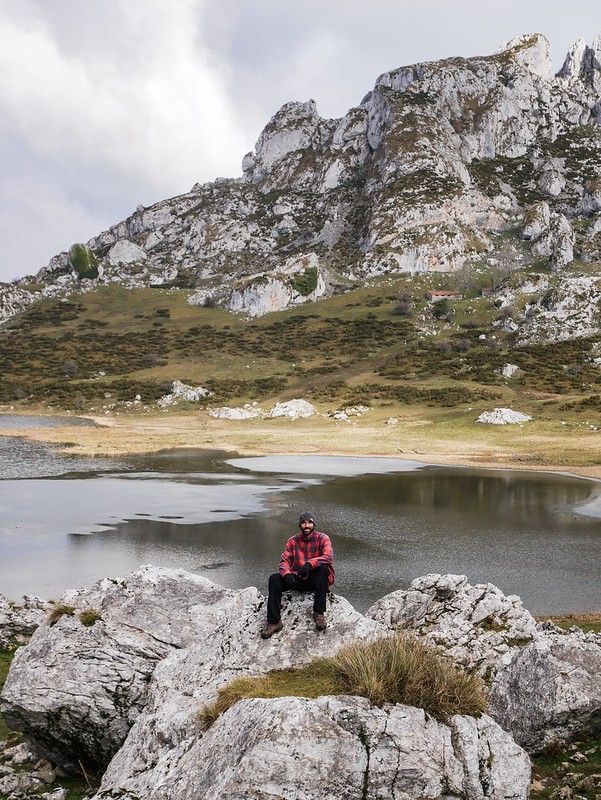 We walked through an old mining area where they still had tracks and a little cart filled with rubble. This area is famous for its lakes though and the first one we arrived at was Lago de la Encina. About three quarters of the lake was a solid sheet of ice!! We followed the left side around the lake which wasn’t much of a trail but eventually we rejoined the main track and met a group of horses grazing on the pastures. 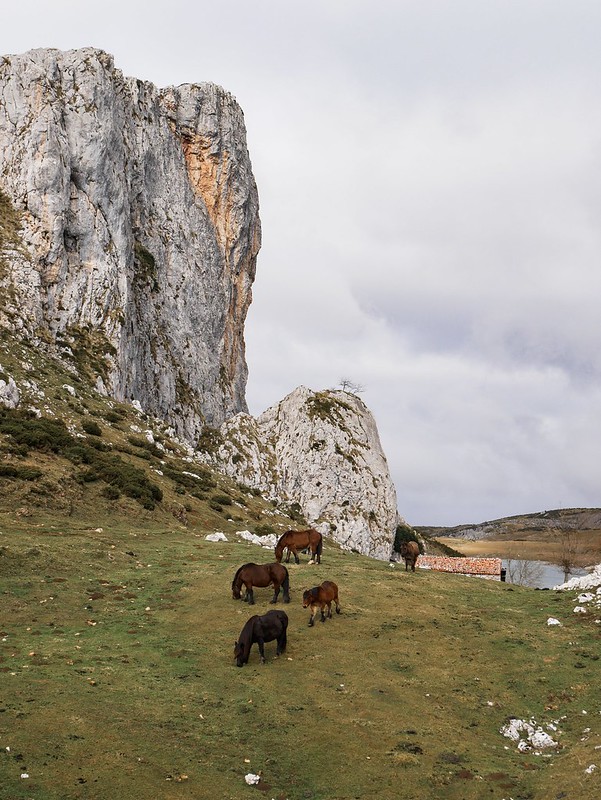 The sun began to make an appearance and the hilly backdrop started to reveal another layer of jagged, snow capped mountains. I googled this area a lot and the main photo was a lake with one small mountain behind it. No one seemed to be sharing photos of these amazing peaks so it was a nice surprise. 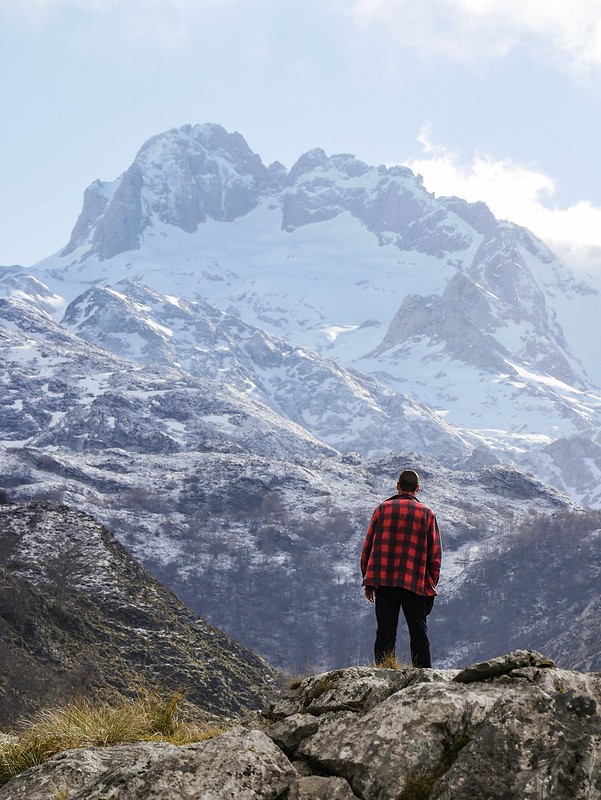 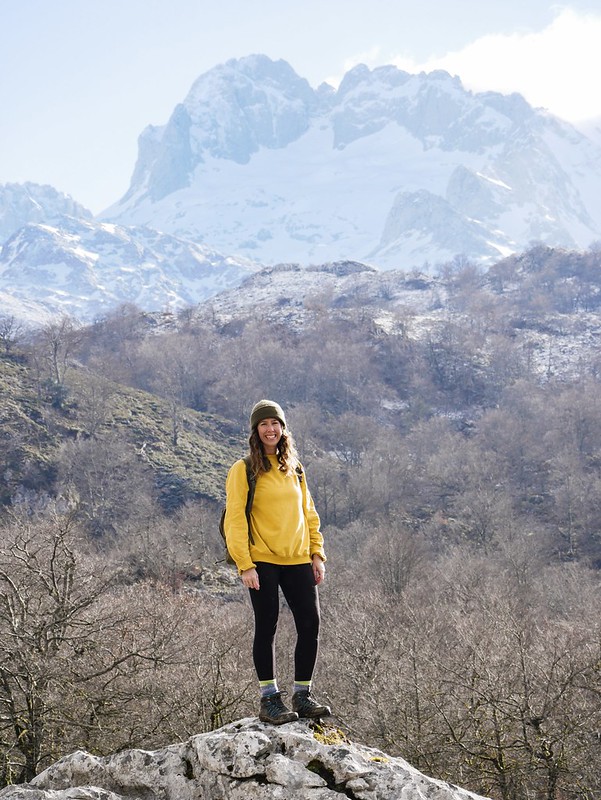 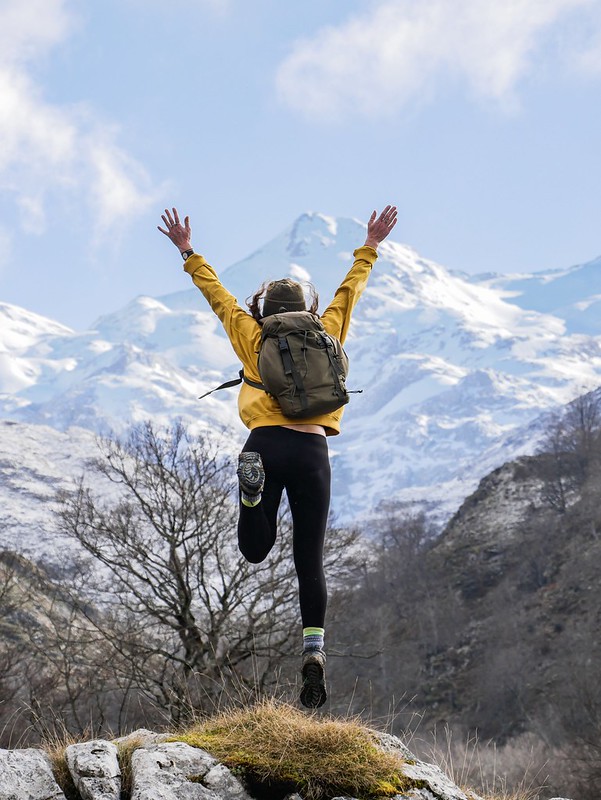 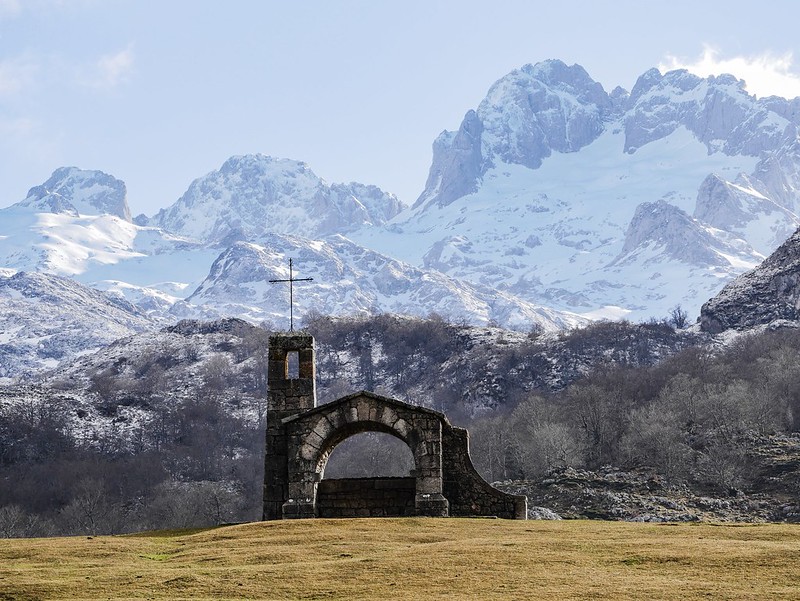 The second, smaller lake didn’t have any water which was strange but we continued around to the last lake, Lago Enol. Cloud was beginning to take over the view again and it was swooping low across the lake as we walked beside it. The main viewpoint for the area was up on a hill between the two main lakes so we headed there and had some hot berry tea while waiting for the cloud to clear. There was a little stone building at the top so we sat on the steps and light snow began falling on us. Within ten minutes the view had totally cleared and we got the view of Lago Enol we were hoping for. 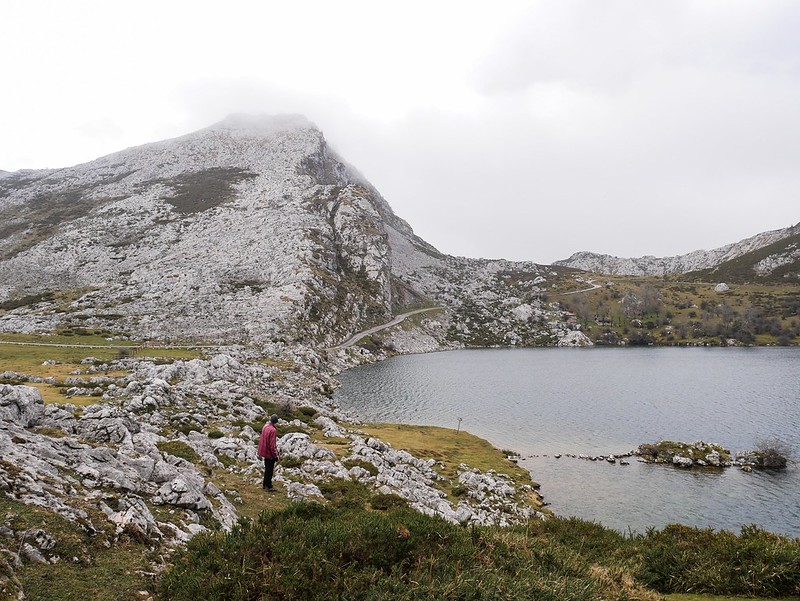 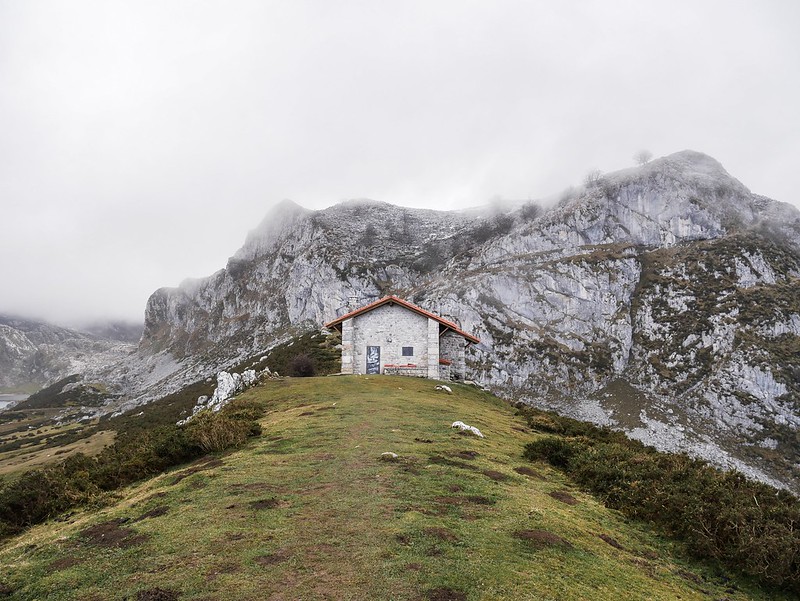 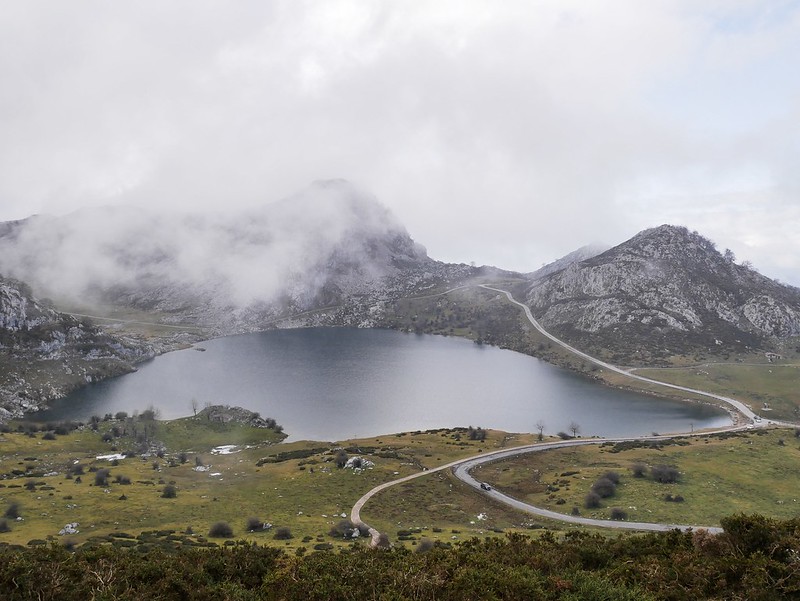 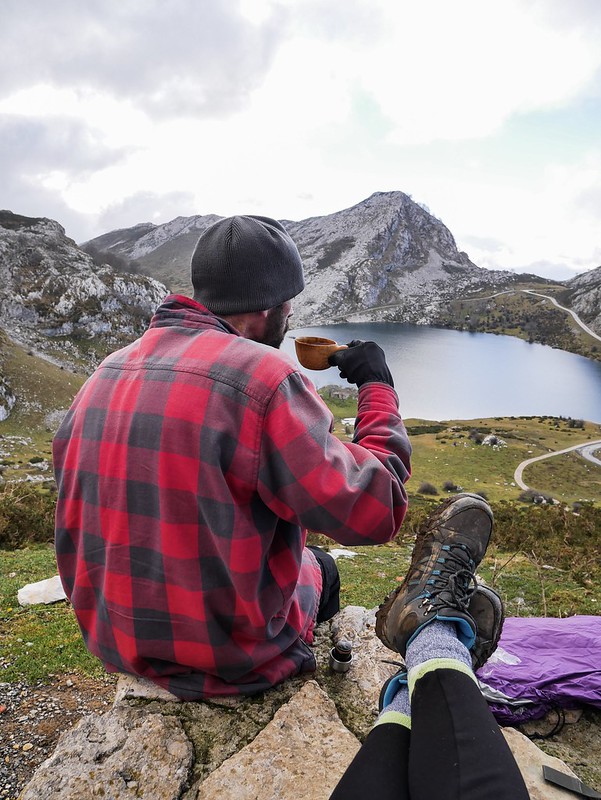 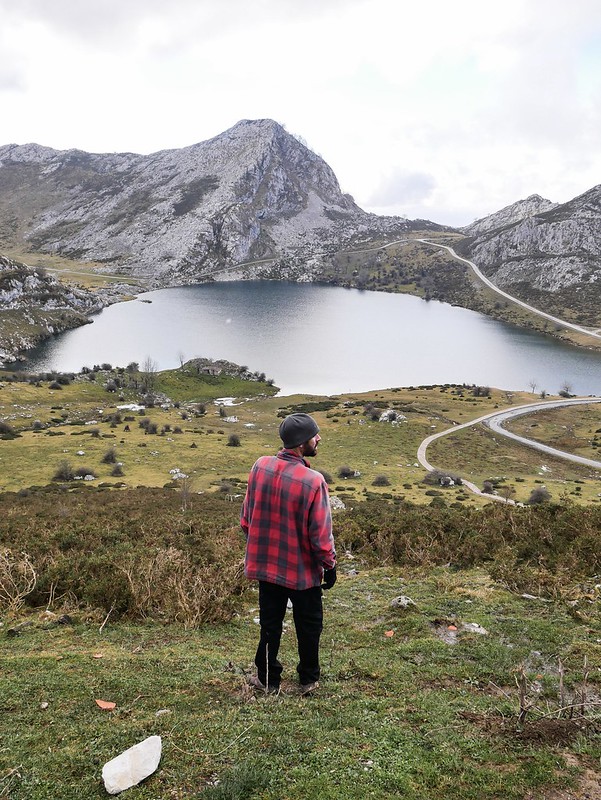 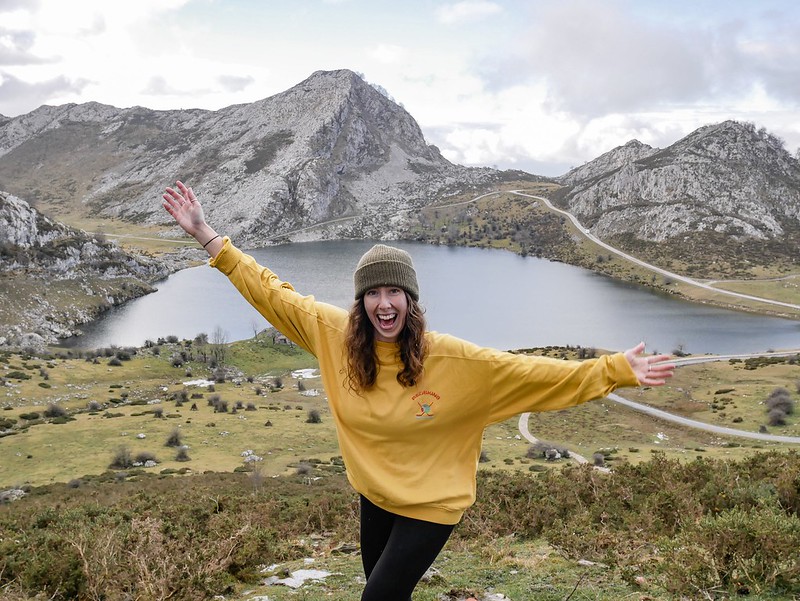 There was one last thing I wanted to do before leaving and that was to throw some rocks onto the frozen Encina lake. They didn’t make the impressive noise I was expecting so we tried again with a slab of ice and that’s the noise I wanted, the ice all shattering into tiny pieces and creating a wonderful tinkling noise. As we were playing around with the ice I noticed the view was starting to clear again, the snowy mountains were revealing themselves behind the lake so I ran up the shoreline to reach an area of perfectly calm water where the lake hadn’t frozen. The whole scene was reflected in the water with the cloud dancing around the mountains and framing them beautifully. Wow!! It was a perfect end to the day and we were so glad we got some interesting cloudy weather with a mix of sun instead of fog all day. The horses we met earlier were being ushered to a different area by a farmer and occasionally they would start running like absolute hooligans, galloping at full speed while others were bucking like they were in a rodeo show. 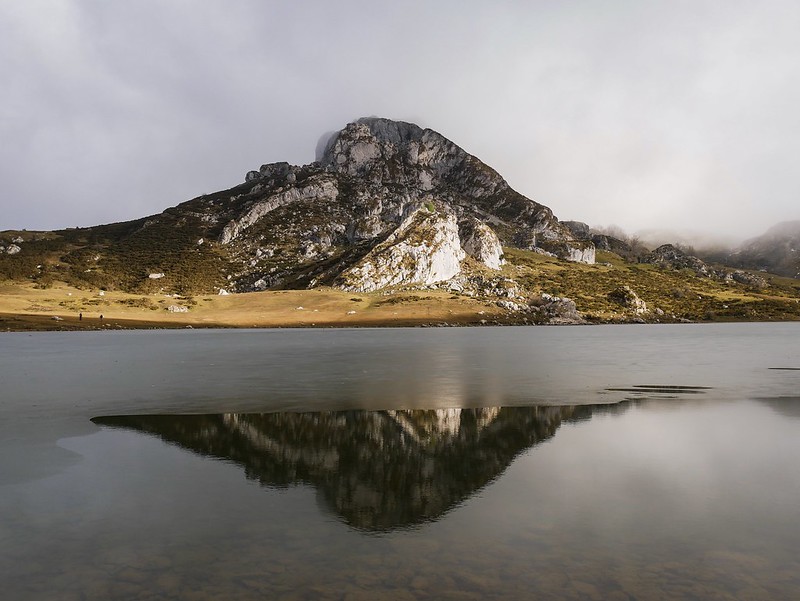 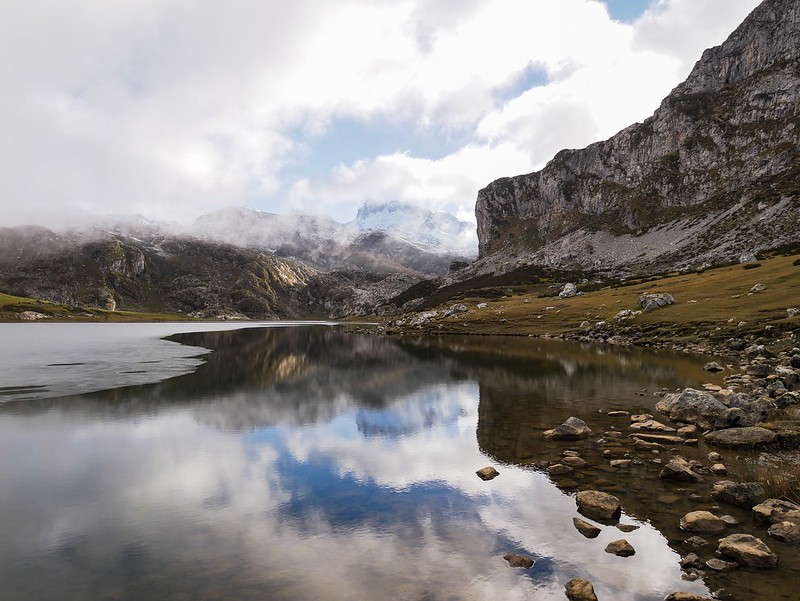 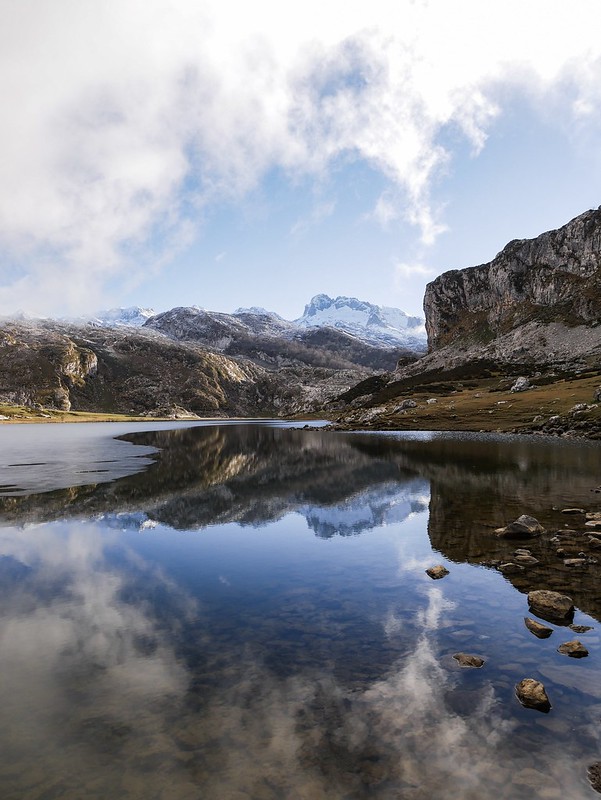 We had a plan up our sleeves to make the steep drive up here worthwhile, we wanted to camp in the car park and do another, much longer hike tomorrow. We knew sleeping in your vehicle wasn’t allowed in the national parks but it was the off season and by the end of the day everyone had left except us…and a park ranger who had been driving around all day. We were torn about the idea though as it was unbearably cold at 1100m elevation. What if it was too cold for our campervan’s water pipes? Well, we finally made the decision to just risk it but then the ranger came by so I figured I’d ask him if it was ok. Sadly he said it was forbidden but he was very nice and recommended some other spots to camp but of course they were down the bottom of the mountain and there was no chance we were coming back up that road tomorrow. So our decision was made for us and at sunset we drove back down. Now that we weren’t panicking about driving uphill we could take in the views and it was pretty crazy seeing the road built along precarious edges. We found a nice spot to camp in a massive grassy car park which we had all to ourselves. Craig stepped outside and said it felt balmy compared to where we’d come from so in some sense we were happy, hopefully we’ll sleep better tonight as it’s tough in the cold weather. 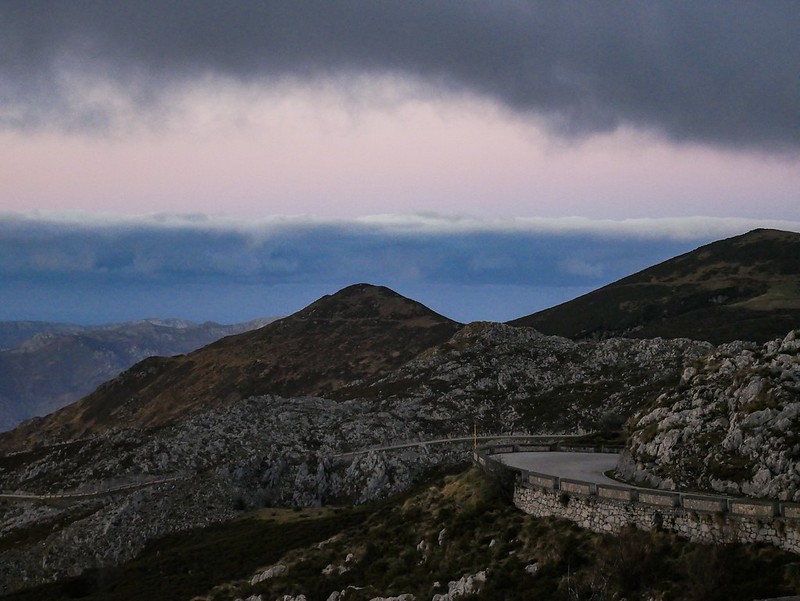