After five days of perfect blue skies in northern Spain we woke to drizzle. I was kind of happy because it meant we could have a chill day which we really needed after hiking so much since we arrived. So we had a lazy breakfast of banana and chocolate pancakes before we drove to Arenas de Cabrales, a town famous for its traditional blue cheese and cider. I found a cheese farm that offered tours and tastings so I messaged the owner on WhatsApp and said we’d be there around 12. It was called ‘Quesería artesanal el Cabriteru’ and it made the popular cheese in a traditional manner with sheep and goats milk as appose to some of the other farms that use cows. I used google translate to write the WhatsApp messages but I did mention that we spoke very little Spanish. As we arrived an old chap looked like he was on his break, sitting outside having a chat with a friend. I pulled out my phone to try and explain that we were the people here for the tour but I didn’t have any signal so we just awkwardly stood there while he reeled off a thousand Spanish words at great speed. He went into a room and came out with three cheeses, naming what they were and explaining something or the other. Then we realised he probably thought we just drove by and stopped to buy cheese, luckily, because I’m a bit of a genius, I managed to open WhatsApp and show him the Spanish messages I’d been sending him or a colleague. He instantly understood and ushered us towards a barn which was hosting about 100 or so sheep and a couple dozen goats. They were all poking their heads towards the walkway where we stood so they could eat some fresh hay. One lamb had managed to escape so the farmer, who I’ll call Juan, grabbed it and shoved it into my arms. The sweet little lamb was so calm, not squirming at all or trying to get away. I guess my only comparison to this is holding my mums dog who can’t wait to escape my grip. The lambs fur felt rather sticky and it’s aroma was very farm-yard, but boy was it cute. When I went to put it back down it’s foot had slipped into my coat pocket so I did get to experience a jiggling lamb after all. Then we headed to the back of the barn to see the goats who had short, shiny coats. Juan hopped into their enclosure, picked up a tiny black baby goat and gave it to Craig. My goodness it was adorable, barely weighing anything and so timid. The whole time we were holding these animals Juan was chatting away in Spanish and I couldn’t catch a single word until he said “solo una dia” which meant “only one day” The little goat Craig was holding was born yesterday!! Wow! I asked if their will be more tomorrow and he said yes. 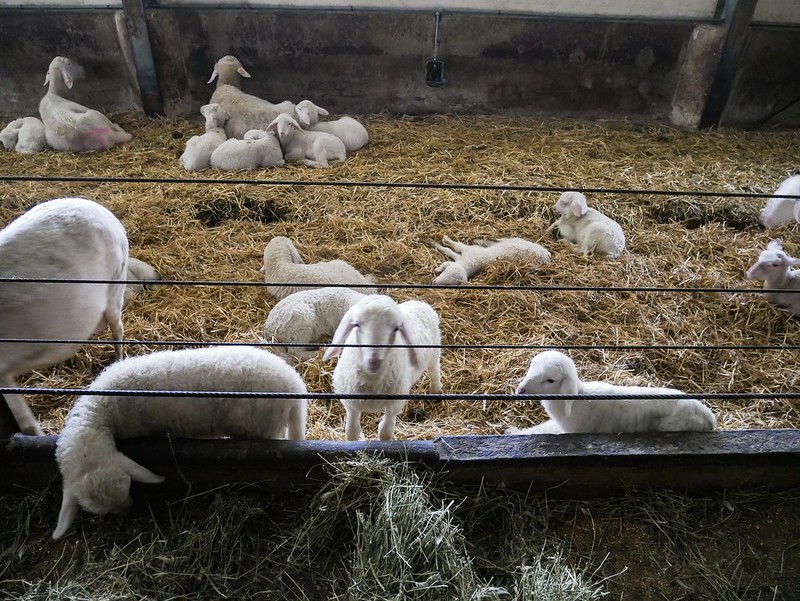 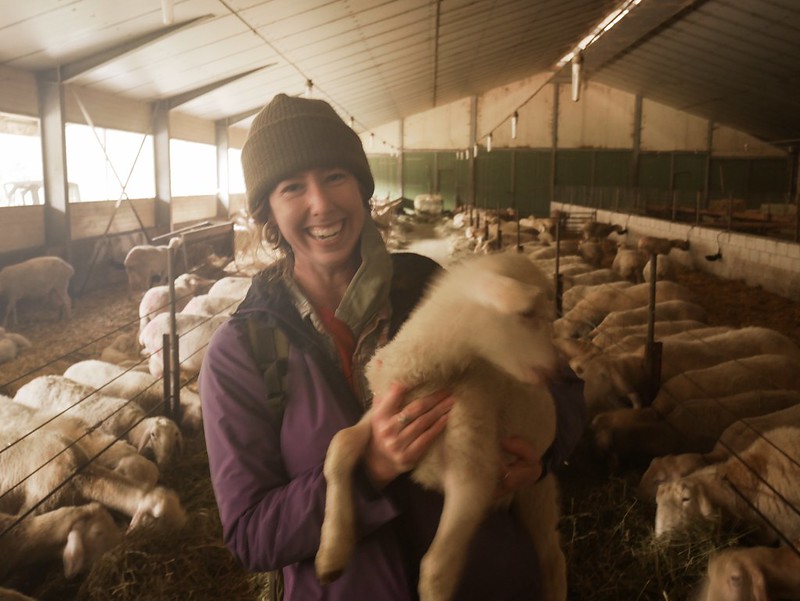 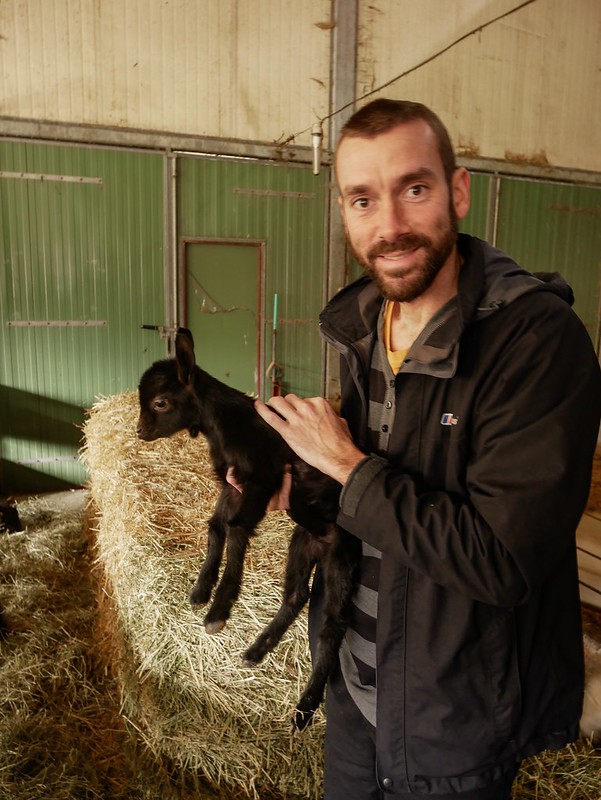 I smelt positively farmy after holding the animals and my hands were sticky from the sheep’s fur. But with a generous squirt of hand sanitiser we were led to a covered seating area to try the produce. First up was cider which is famous in this region of Spain. Juan brought an unlabelled green bottle out to us and proceeded to place it in a vintage looking contraption on the wall which effortlessly removed the cork. Unlike the cider we’re used to, this stuff is totally flat so to compensate for this they pour it from a great height with the bottle above their heads and the glass below their waist. Apparently bartenders around here can pour cider like this while looking the other way and having a conversation with a customer. Juan wasn’t quite as skilled and appeared to be pouring half the cider on the floor. I had to wait for him to go indoors before I inspected the splash backs that had hit my feet. He only poured us about an inch of cider each and from what I read it’s supposed to be drunk in one go to make the most of the fake fizz. I wasn’t a huge fan of the cider as I have more of a sweet tooth but Craig was enjoying it and whenever we finished our thimble Juan would come back outside and pour more over my feet. Between the cider Juan brought out a board with three rows of different blue cheese. Each row had four pieces but to be honest they all looked and tasted very similar. It was a dry blue cheese, not as strong in flavour as Stilton and it had a different twang due to it being made from goat and sheep milk. I wasn’t a huge fan of the cheese either, I much prefer a softer blue, and one that tastes less farmy. We began to ponder if Juan remembered which cheese was which, once we ate all the samples we could imagine him coming back out and scratching his head when we asked to buy the middle one. Luckily this chap was on the ball, and if he wasn’t he was a fantastic actor because he came out with the wrapped up cheeses and placed them in the correct positions by our tasters. I wasn’t interested in buying any of the cheese as I didn’t like it much, but Craig wanted some so we asked how much it was and he headed back into the barn to weight it. My jaw dropped when he said €26. To be fair he said it in Spanish so it took me a moment to comprehend the price he was saying. Crikey!!! We’ve worked in an artisan cheese restaurant in Australia and tried the finest blue cheeses in New Zealand and we’ve never come across a block of cheese that expensive!! But we were committed to buying some now that we’d bloody asked the price and Craig said he wanted to make sure they had enough money to keep the baby goats warm and well fed. So, with our life savings gone we left the farm with a 650g of cheese that is now in the process of destroying our campervan fridge with its stench. 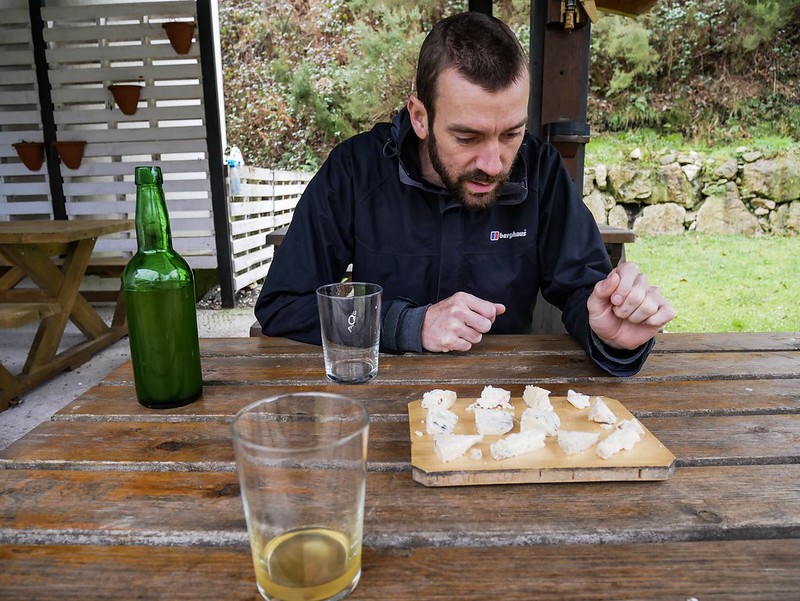 After the farm visit we pulled up in a lovely parking area with a view of the mountains enshrouded in cloud. There was supposed to be an incredible view of Naranjo De Bulnes, the most prominent limestone tower in the national park, but it was totalled hidden. It was a nice spot to relax for the rest of the day though and finally have a shower – our first one in 6 days!

When we woke the next morning I pulled back the curtains and spotted the mountains all poking out above a layer of cloud!! I wasted no time and ran outside to take some photos. There wasn’t the usual arctic chill to the air so I was able to stand outside for ages, watching the clouds drift by and the clouds turn pink. 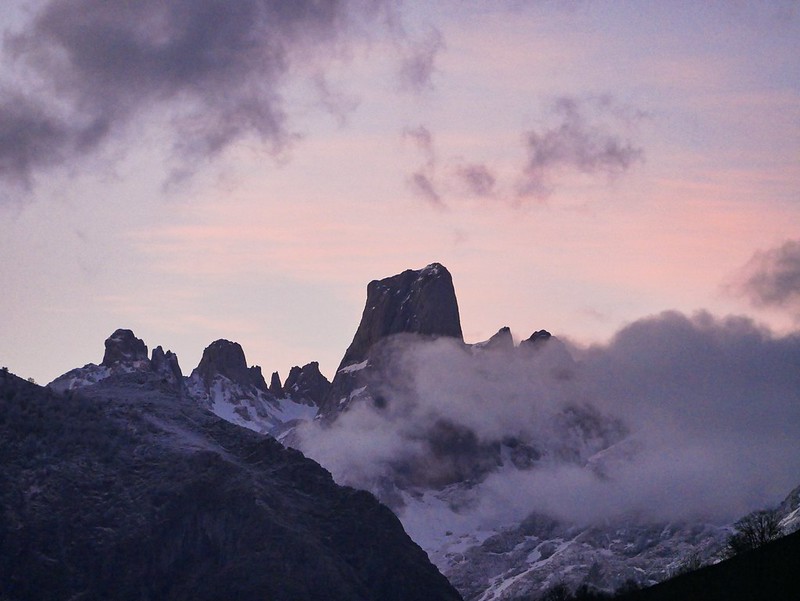 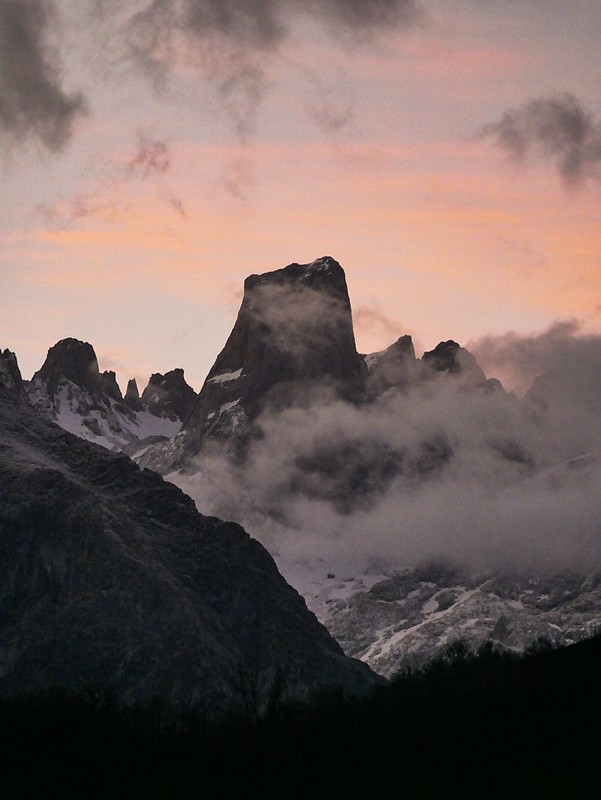 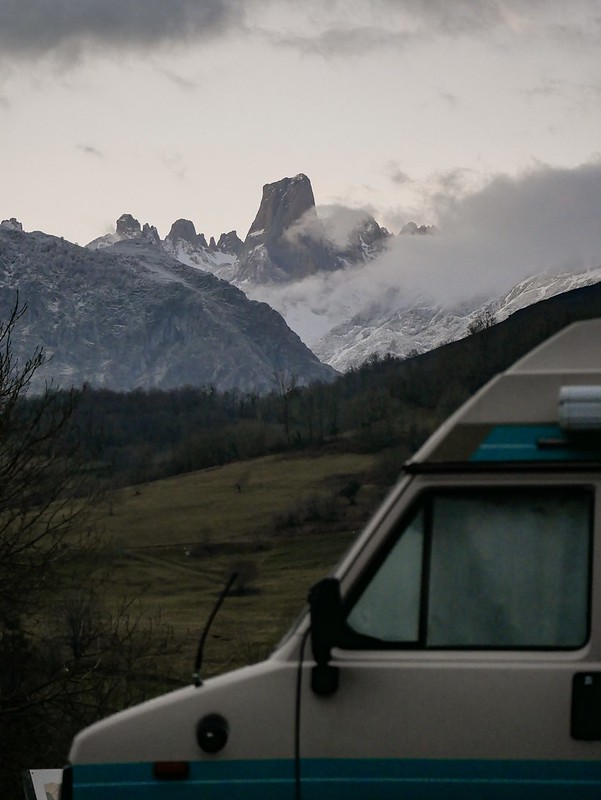 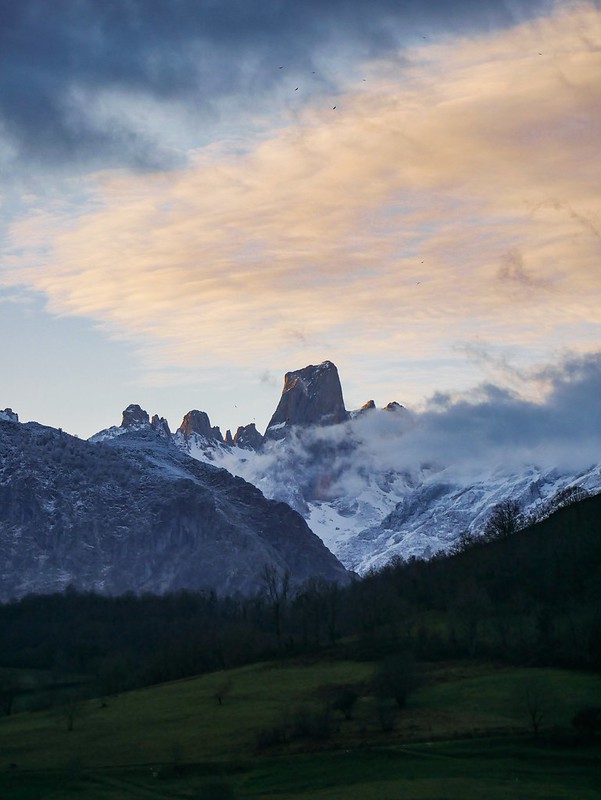 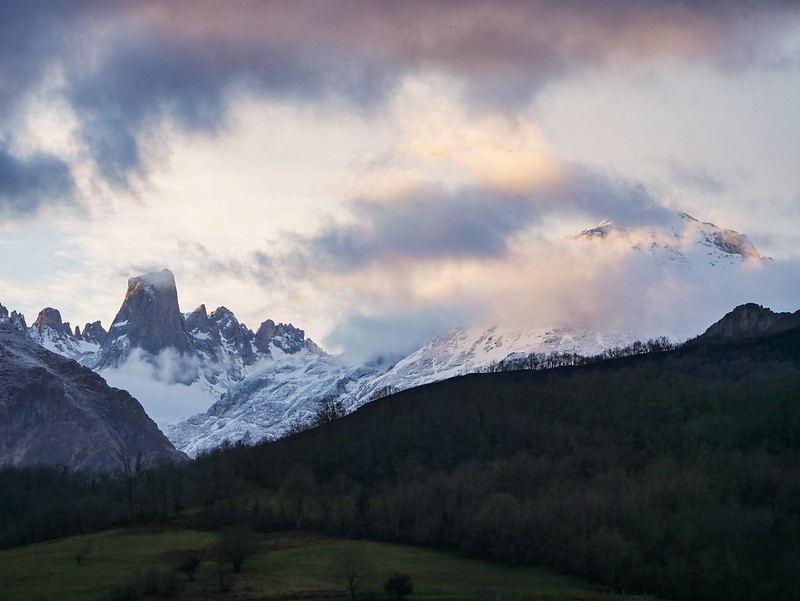