We weren’t blessed with the best weather as we arrived on the Beara Peninsular with miserable rain showers. We crossed into County Cork and made our first stop at the colourful village of Eyeries. I don’t know if there’s a historic reason for painting their buildings different colours or whether it’s just to make the place look good, but either way we loved it. Every building was a pop of colour and I don’t know why this isn’t done to brighten up less appealing neighbourhoods around the world. We took a little stroll through the village and then continued the drive west. Craig wasn’t enjoying it much, it turned into a single track road with plenty of hilly sections and tight bends which our van wasn’t happy about either. 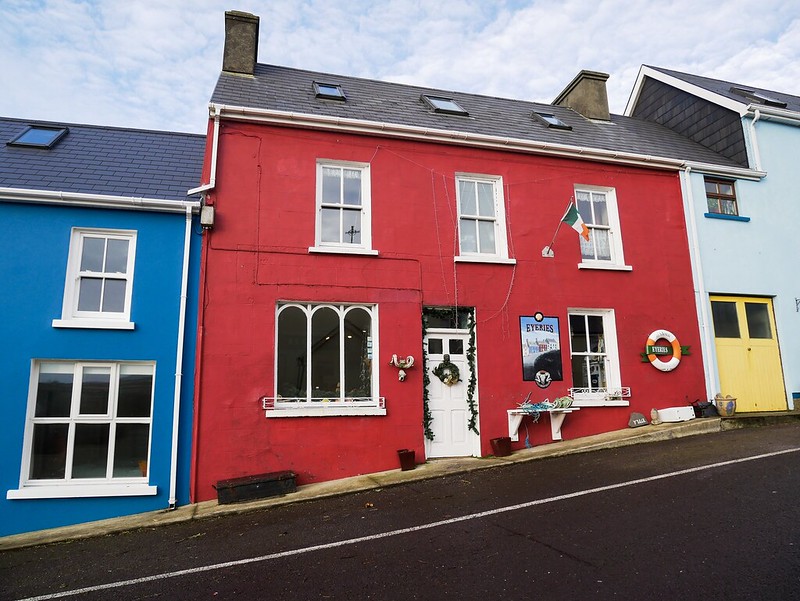 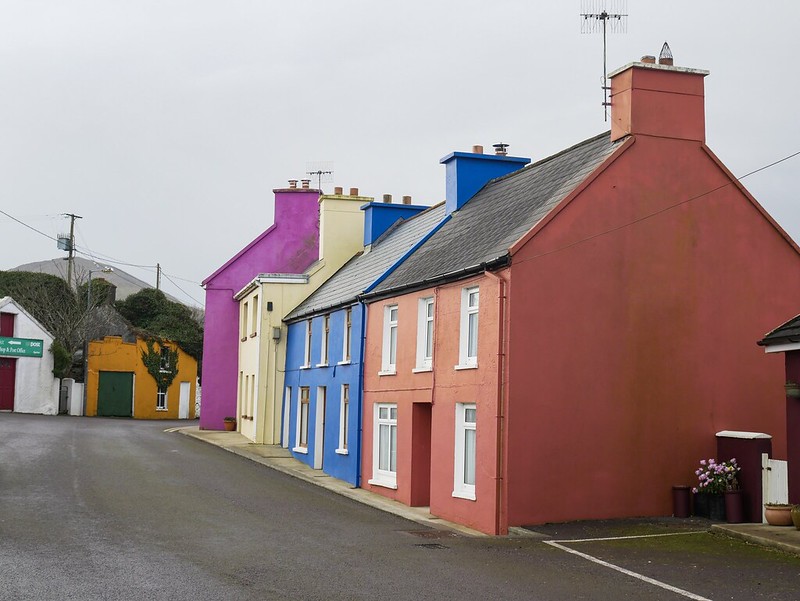 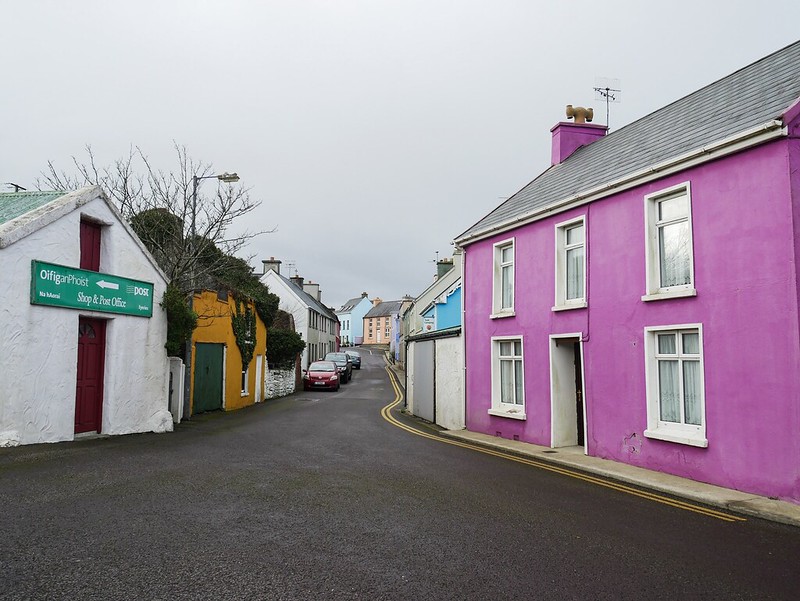 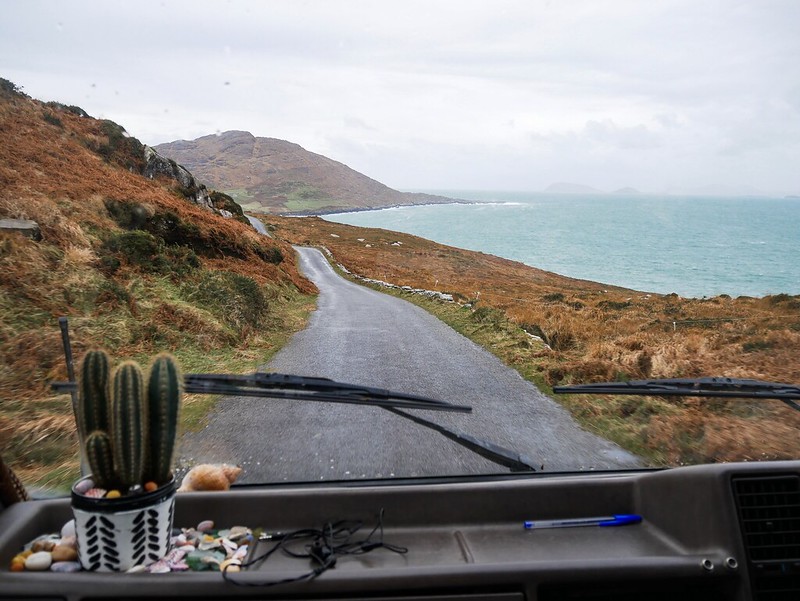 It was very rugged on the western tip of the peninsular with rocky hills and the Atlantic Ocean crashing into the coastline. We had a well needed stop from the winding road in the village of Allihies. This has to be one of the prettiest villages in Ireland, the buildings were popping with colour! The centre of the village had the brightest colours and even though the rest of the buildings were much tamer they still put in a lot of effort by matching the colours of every two houses, so one would be a yellow house with the windowsills painted blue and the house next door would be blue with the yellow windowsills. 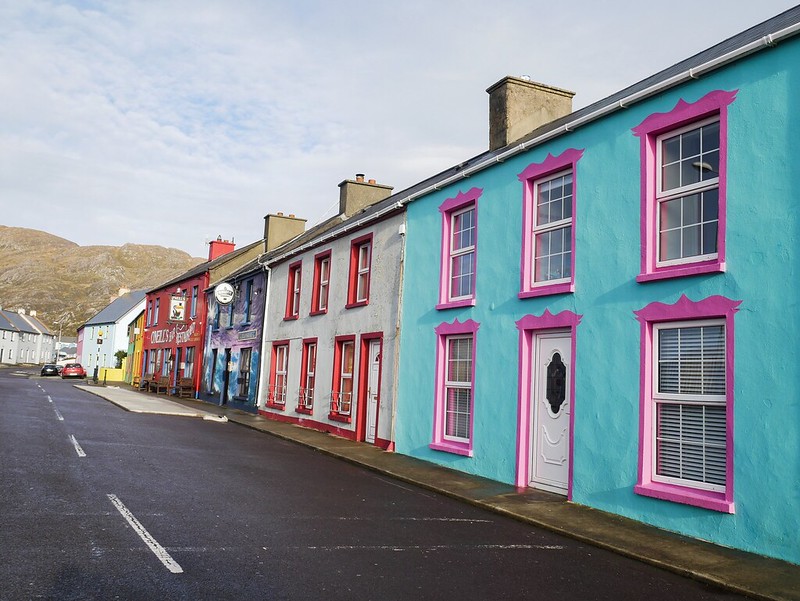 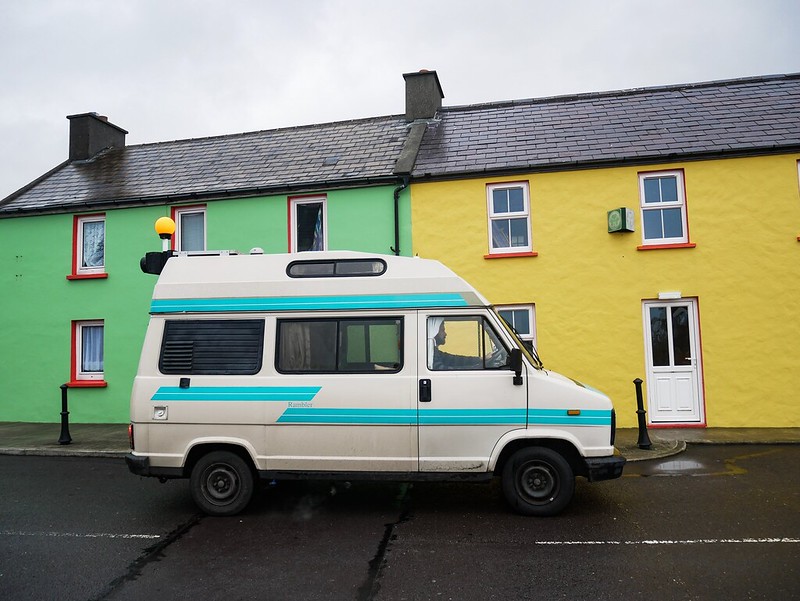 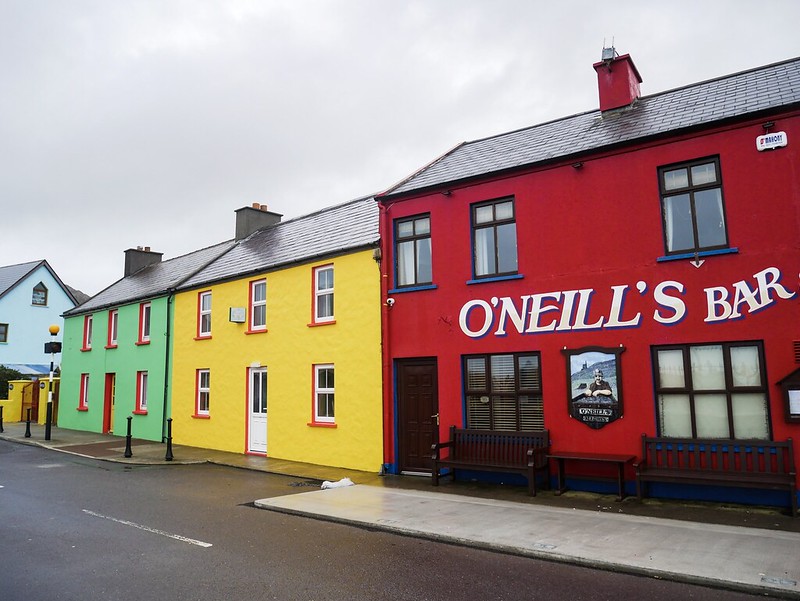 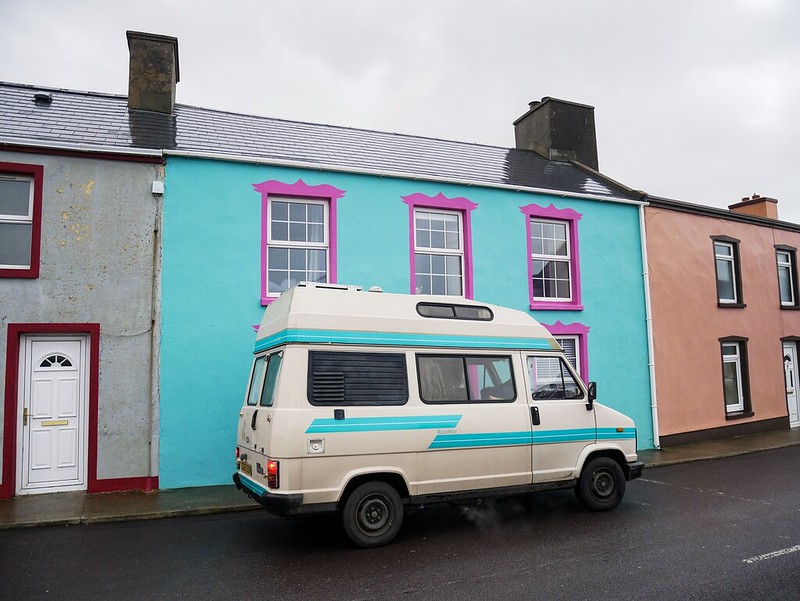 It didn’t take us long to spot a friendly dog in the village, the sweet boy seemed to just be allowed to roam free and he adored strokes. His tag said ‘Harry’ so that’s what we called him and later we laughed because we realised that was probably the owners name. Anyway, Harry decided to follow us on a walk that left the village and headed up a hill to see the old copper mines in the area. We got to a couple of stiles where we thought Harry would turn back but he flattened his body and carefully shuffled under the low fence. It was so lovely having a dog accompany us on a hike and we went all the way up to an old brick tower where we got a view of the coast and colourful Allihies below us but the weather was very hazy with rain imminent. 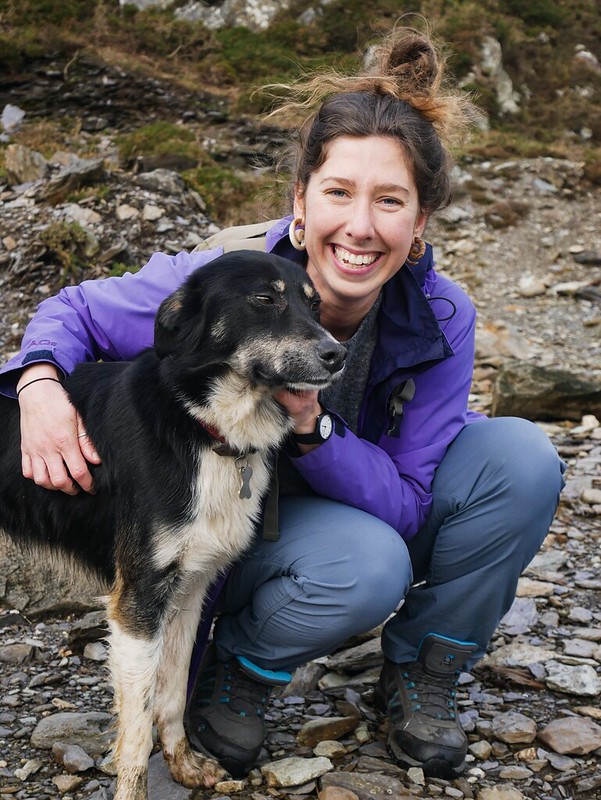 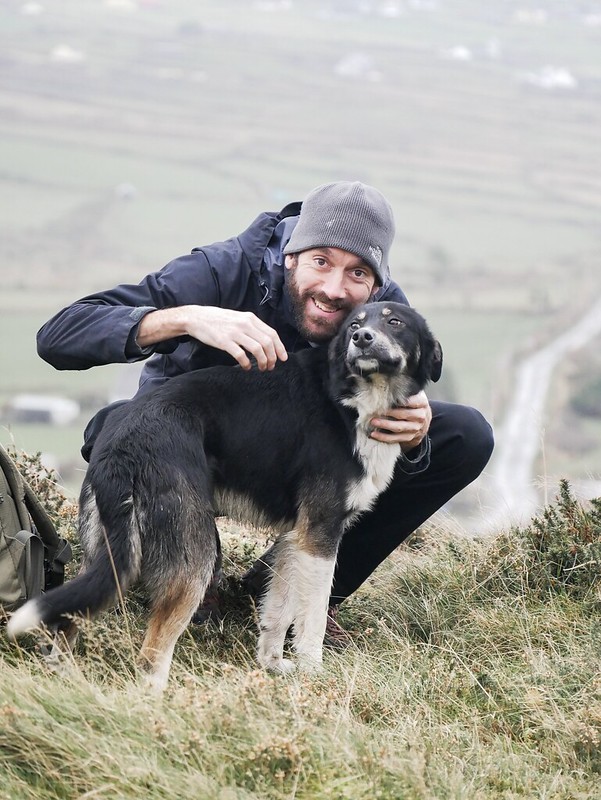 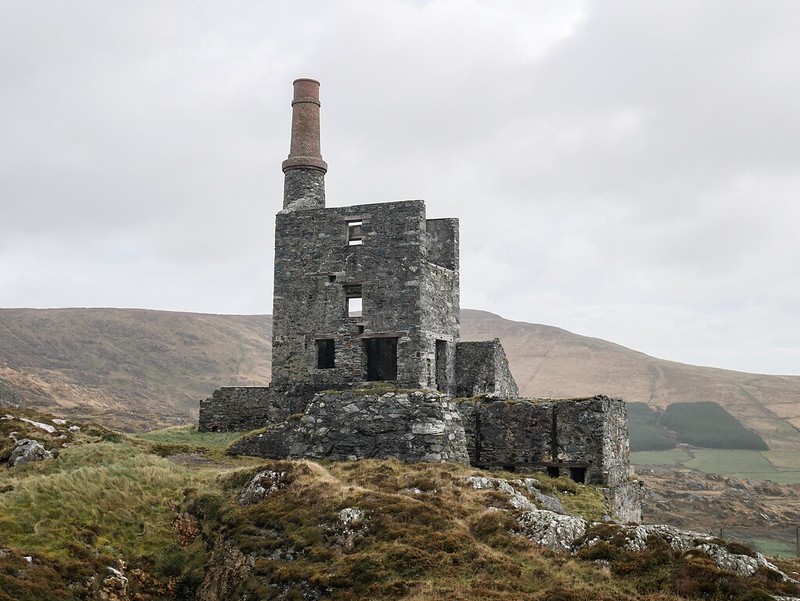 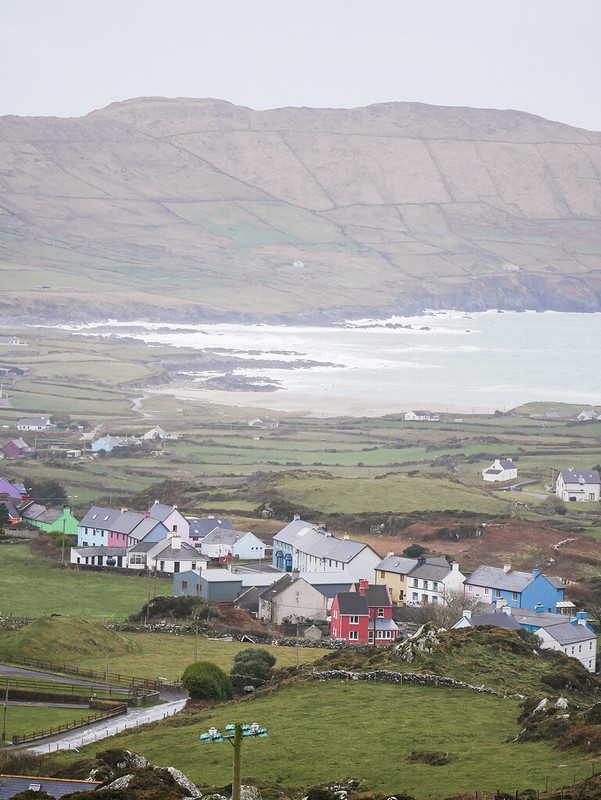 As we got back to the village we had to say farewell to our new friend, the poor thing just stood outside our van staring at us and I felt awful. The whole time we’d assumed he just roamed the village and went home when he was hungry but seeing him staring at us made me wonder if he actually just escaped from his owner and needed to be reunited. I was just about to pop outside and call the number on his collar when a minivan driver pulled up beside us. His van said ‘Dog Warden’ on the side which made me think that someone must’ve called him to report a missing or escapee dog. But the chap opened his window and said “is he yours?” I explained that he wasn’t but he was very friendly and had joined us for a walk. Then I could’ve sworn his repsonse was “d’you want it?” But when I said pardon his response was totally different. It was really strange that he pulled up at that very moment, we’ve never ever seen a dog warden car and suddenly one pulls up in one of the remotest corners of Ireland. Bizarre. So hopefully the man would get in contact with the owner who I assume will be like “yeah that’s Harry, he roams the village, let him be”.

We left the area and after a drive we pulled up to camp near a rather strange sight called Puxley Manor. It’s an abandoned Manor House but it looked like it was still in very good condition with only a couple of smashed windows. Legend has it that the house is cursed and it seems to of had nothing but bad luck over the years. It was first built in 1739 as the Puxley family were thriving from their copper mines in Allihies. In the late 1800 the house was extended and remodelled but at the cost of selling their copper mines and not too long after in 1921 it was burnt to the ground by the IRA. For some reason they decided to do a huge redevelopment project and briefly opened up in 2007 as a 6 star hotel. It didn’t last long though as the financial collapse caused it to close the doors and fall into disrepair, who knows if it will be redeveloped again or if the curse will keep people away. 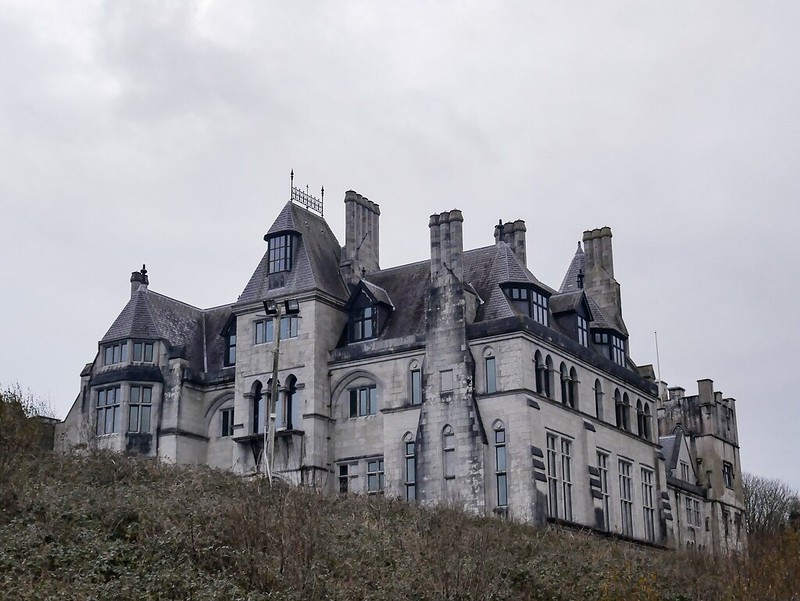