We had planned on hiking a mountain near Achill Island but low cloud covered the tops for most of the day so we gave up and hit the road until we reached Westport. It was such a colourful town with shop-fronts painted different colours and a lovely font used on each sign, giving the place an old time vibe. After a little wondering around we found a car park where we could stay the night which meant we could finally go to a pub for a traditional music session. Hooray! The only problem was it didn’t start until 9pm which is very late for us, but to make matters worse we changed our clocks while in Ireland to get maximum daylight hours…so 9pm was actually 10pm our time, in other words it was our bed time.

We managed to stay up and force ourselves out to Matt Malloy’s pub, a famous one for it’s music sessions. It was a really nice pub with plenty of character, a few different rooms and nooks to sit in and the back room was where the music was happening. It seemed like all the tables were taken but then Craig spotted two barstools with a little ledge to put our drinks on so that’s where we went. There ended up being four musicians; two acoustic guitars, a fiddle and a tiny accordion style instrument. They played some really lovely songs and we were happily sipping our Guinness while enjoying the music. I ignorantly thought because of covid the area was maxed out with seating but alas more people came into the room and a man came and sat on a stool right next to me. He didn’t even acknowledge me so I stared at him until he looked my way so I could say hello. Then his girlfriend appeared and they clearly weren’t locals, they sounded Eastern European and started having an argument straight away. He seemed to be denying messaging someone and she was furious. I thought a fight was about to break out between them, or a drink thrown and if that happened I’d be right in the firing line. Anyway, in a twist of events they made up five minutes later and let everyone in the room know by kissing…the poor fiddle player didn’t know where to look. 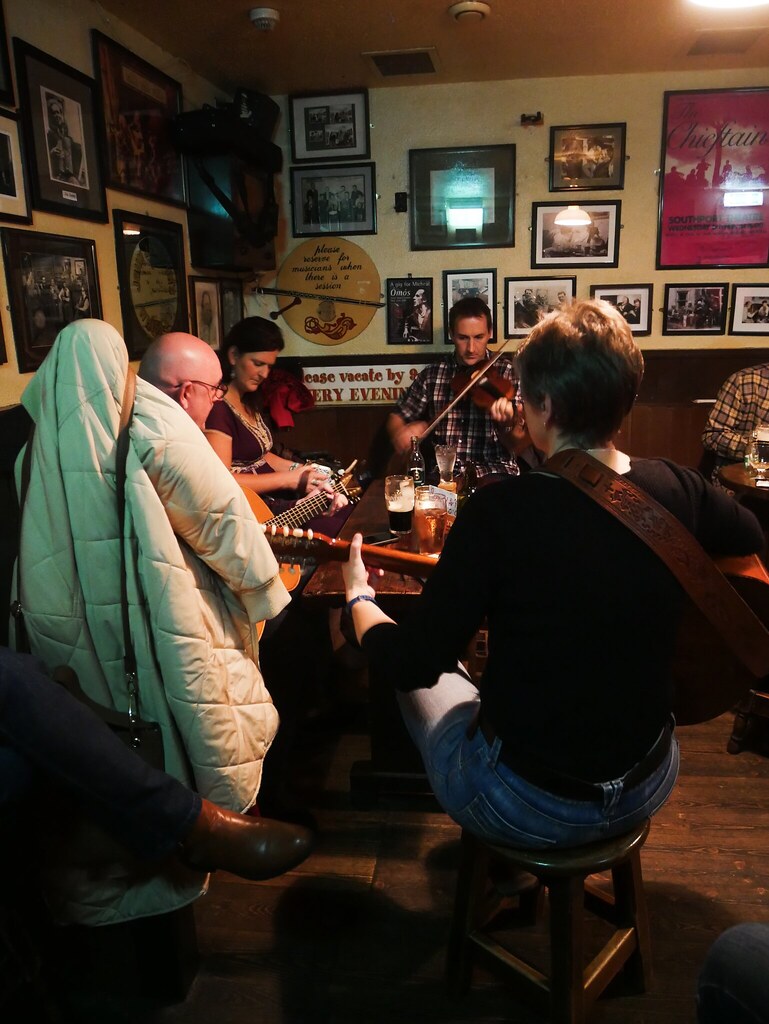 Minus the strange couple and feeling extremely uncomfortable about being so close to strangers during covid we had a fun night. Some onlookers joined in with the musicians and sang along and we ended up staying until past midnight which is unheard of for us. The following day we set off early and made our way to the Croagh Patrick trail head. It’s 764m tall and is considered to be the holiest mountain in Ireland. A pilgrimage takes place on the last Sunday of July with up to 25,000 pilgrims climbing the mountain.

There was a wide stony track leading up the mountain but we could see we were heading for cloud. The summit was engulfed in a big fluffy cloud so after making it to the east top we decided to give up. It didn’t look like the cloud would clear and it was drizzling with rain too. Once we were below the cloud we had a view of Clew Bay right ahead of us. The bay was covered in tiny islands, 365 to be precise so there’s one for every day of the year. On our way back down a chap walked past us, he was really short with a tinge of ginger in his hair and a green coat and after we passed him I couldn’t help myself and whispered to Craig “did we just walk past a leprechaun?” Very naughty of me, I know, but we’re in Ireland and he looked the part. Anyway, we continued down the trail and met another man who said his partner had gone ahead and then he said “you probably passed him, the short guy in a green coat” and I almost lost it. My mouth was beginning to twitch as I restrained myself from shouting “you mean the leprechaun?” My goodness I shouldn’t be allowed out in public. 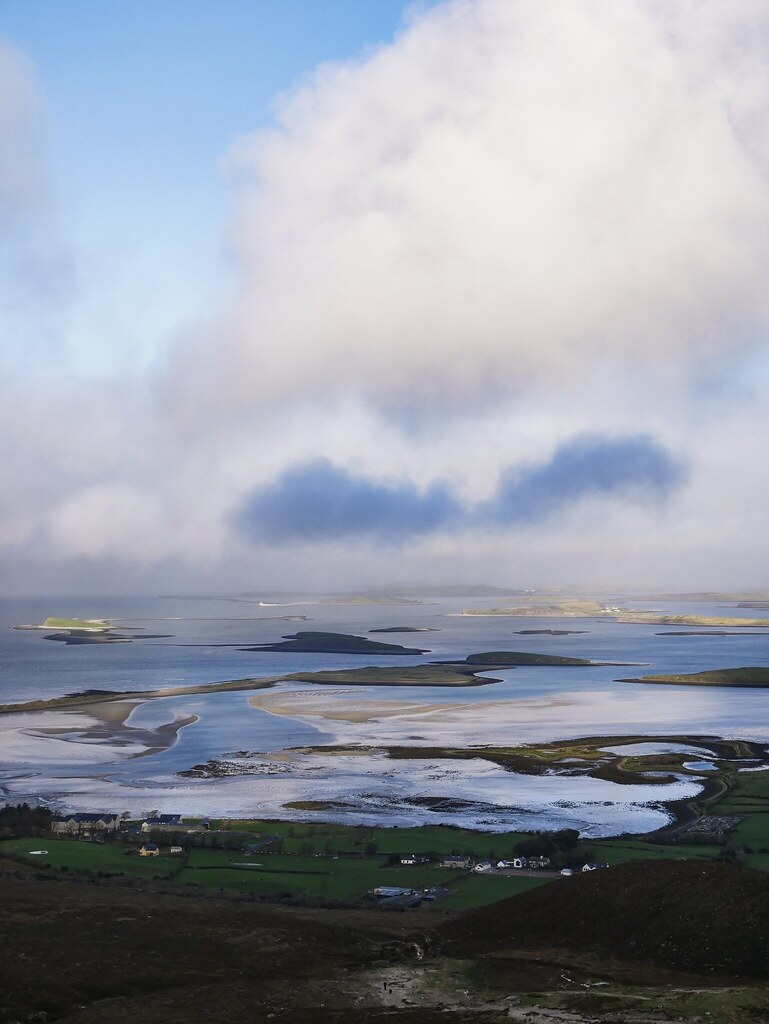 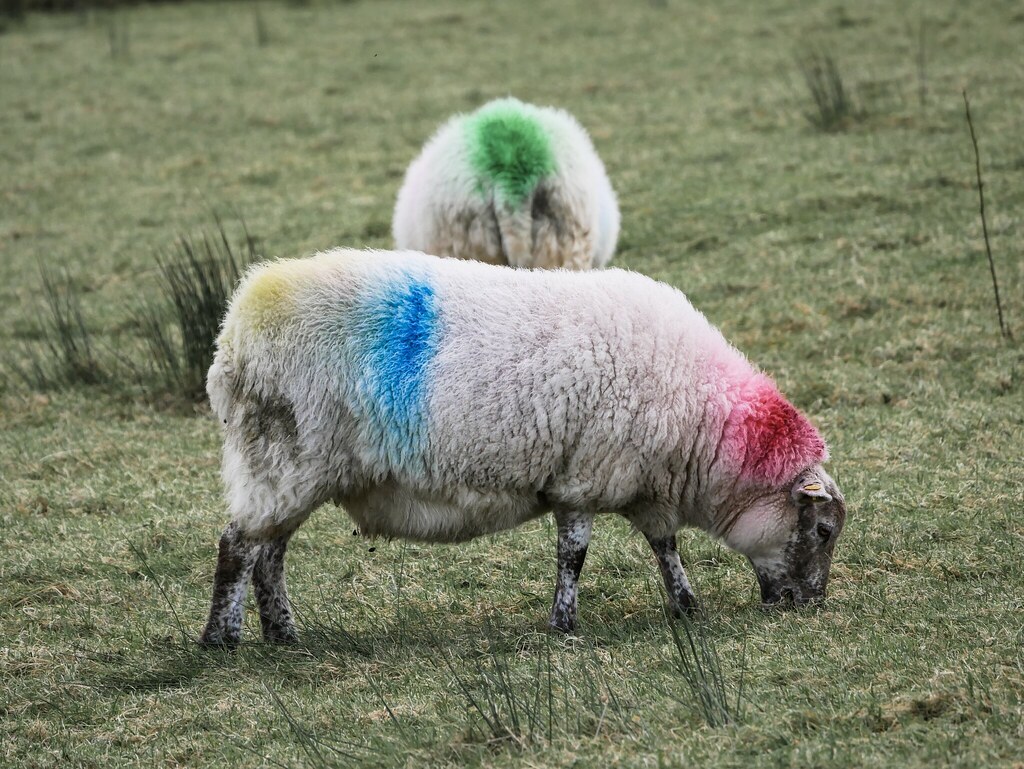 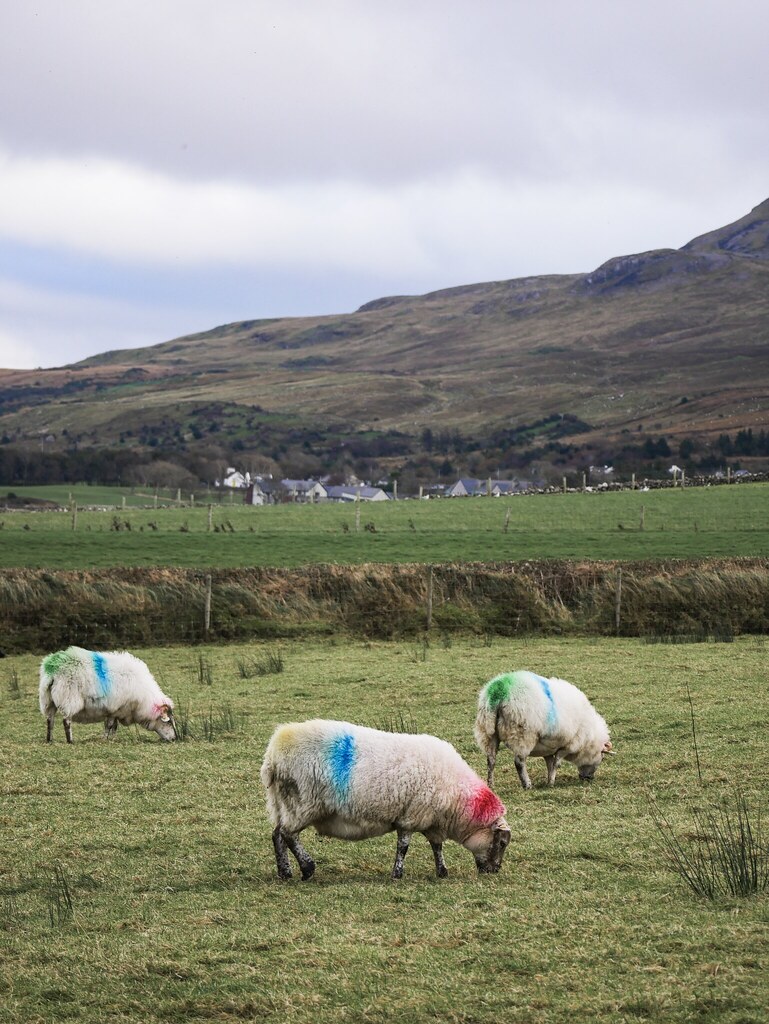 Further up the road was Bertra Beach which was a long spit of land jutting out into the sea for almost 2km. After a little coastal stroll we headed further west to Old Head Beach. We were able to park right on the concrete pier with a beach on either side of us. We went for a walk and met a lovely dog who apparently lives in a farm nearby but goes to the beach on her own to socialise. Her name tag just said ‘Brandy Girl, lives at Old Head Beach’. There were lots of wild swimmers which surprised us for November. The Irish certainly seem like a hardy bunch! As we walked up the sandy beach I noticed an old women was getting changed after a swim, tits just hanging freely. So we took a wide berth and headed towards the lapping waves but then she bloody started a conversation with us. She thought she recognised us from the day before but it led to a conversation about wild swimming and how the locals all started doing it during the lockdown and have braved a swim every day since then. The women was probably in her 80’s and so carefree that she started drying off her crouch with her towel at which point we quickly finished the conversation and waddled off as quick as we could. Maybe the Irish have influences from Scandinavia who are very carefree about nudity…which is usually an uncomfortable situation for a Brit. 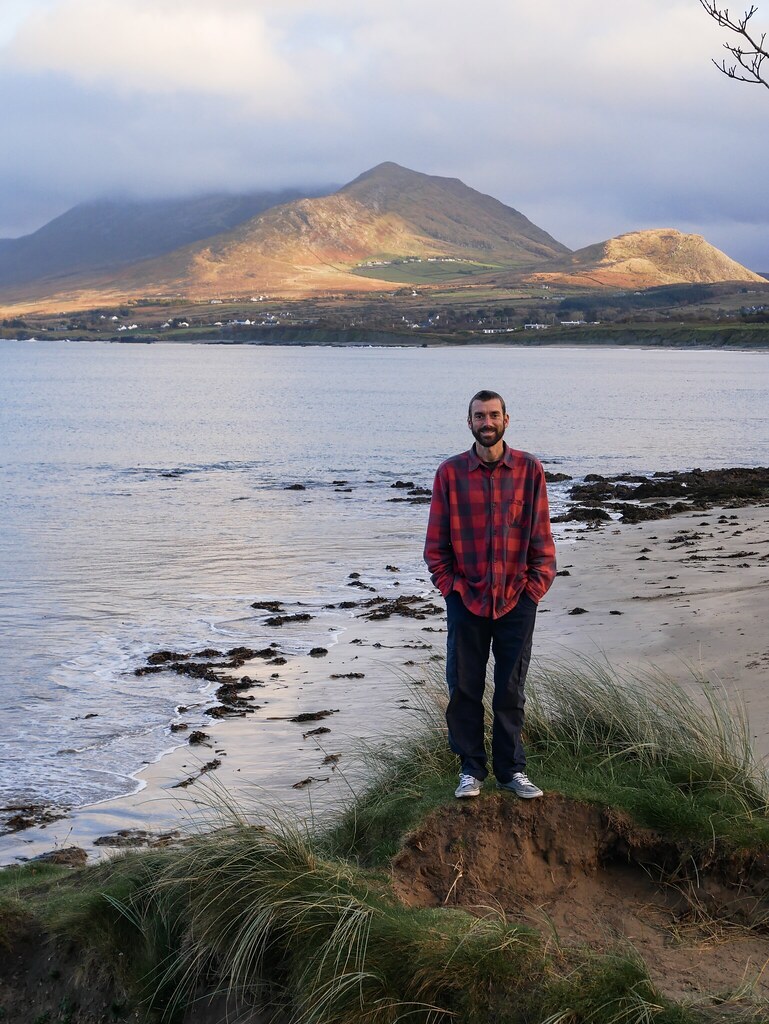 We had a peaceful nights sleep and woke before the sun, which was a good job as at about 8am lots of cars pulled up around us and a big group of women donned their swimming hats and did a few laps in the sea. It was a drizzly, windy day and it didn’t sound appealing at all, but we were feeling like the odd ones out so we decided to give it a go too. Unlike all the locals who were probably going home and having a hot shower after their swim, we had to do a bit of forward thinking. We just wanted to get the salt water off us really so we hooked up our shower onto the side of our van. It was our first swim in the Atlantic Ocean and bloody cold too! Instead of running back out like we usually do we forced ourselves to stay in and bare the pain. The stinging soon eased and we managed to spend about five minutes in the water which we were pretty chuffed with. The cold shower worked well but we felt like a couple of ice cubes afterwards and it took us so long to warm up. But boy did we feel fresh and zingy! 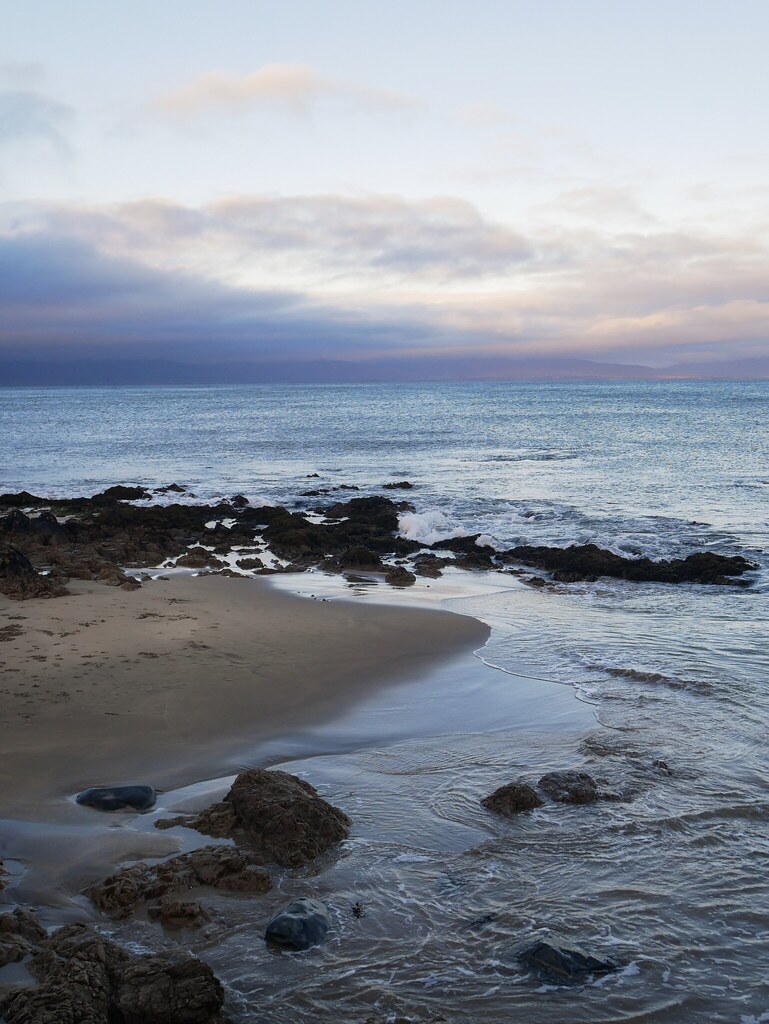 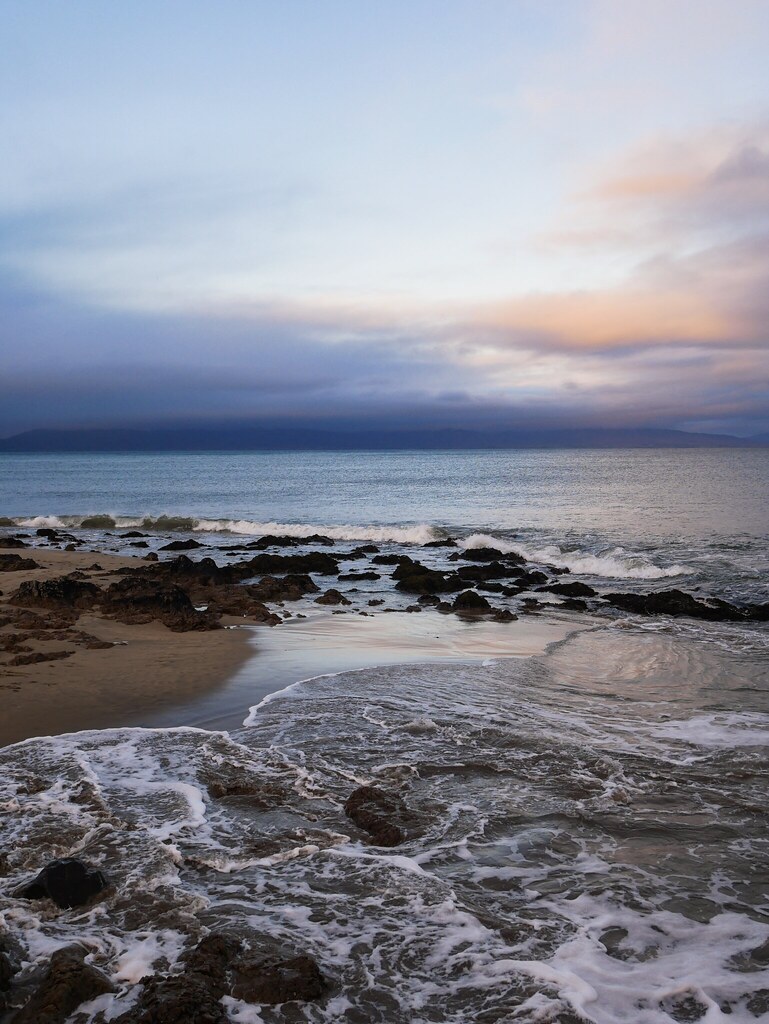