Eshaness is considered to be a must visit area in Shetland. It sits on the north western tip of the mainland on an area of old volcanic activity. We arrived in the evening so we slept in the carpark with the lighthouse beam sweeping past our window every minute or so. The carpark was high above the cliffs without any barriers so we didn’t feel very safe if our handbrake failed so Craig rammed wooden blocks and rocks under the tires, just to be sure. 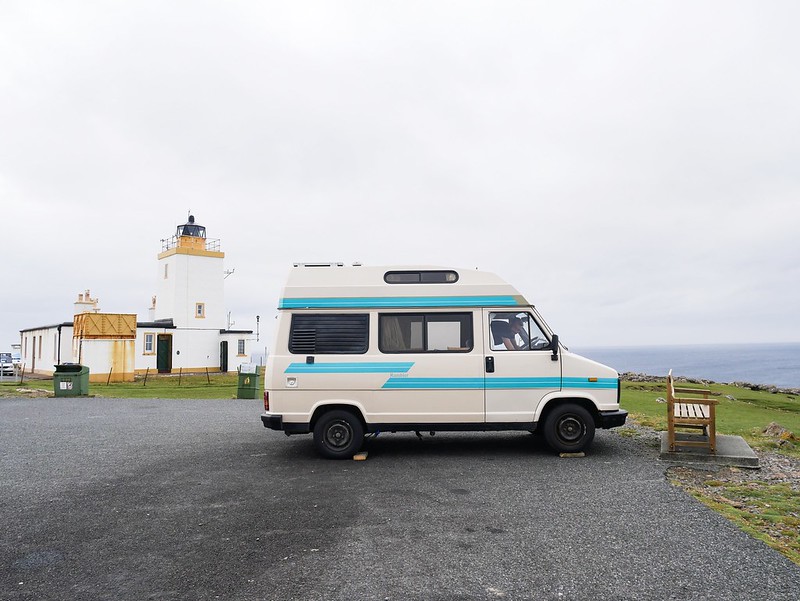 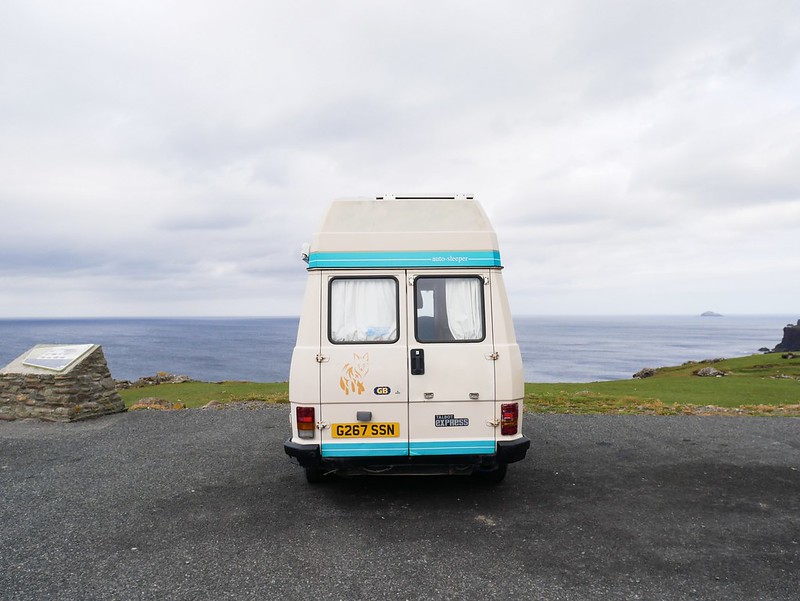 The following morning we headed out on a hike along the cliffs which were a charcoal colour from the volcanic activity. Rocks jutted out the sea and crevasses cut inland. One of these crevasses used to be a sea cave until the ceiling collapsed. To be honest the scenery wasn’t that impressive to us. We much preferred our hike around Muckle Roe which we had to ourselves. For some reason this place has a name for itself and it was one of the busiest spots we’d visited in Shetland. I guess if you’re into geology you would find it all fascinating, but to us it was a little anti-climatic. 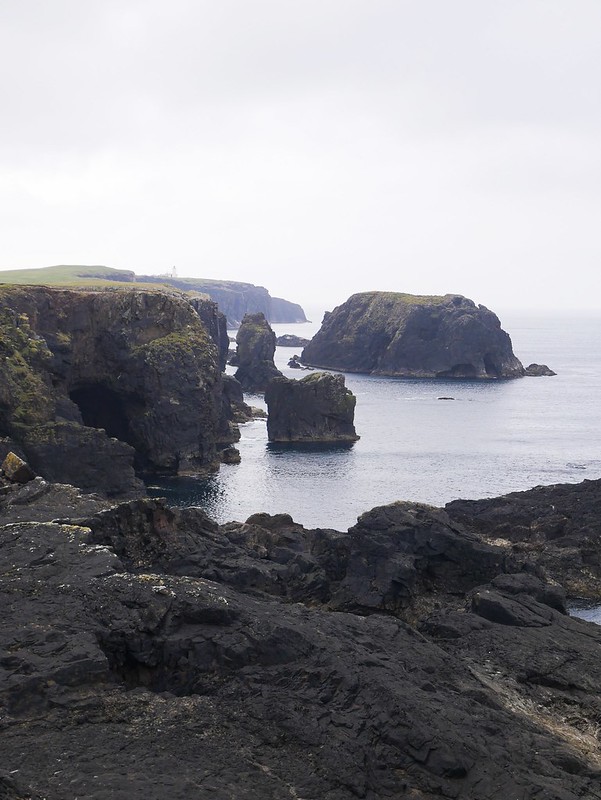 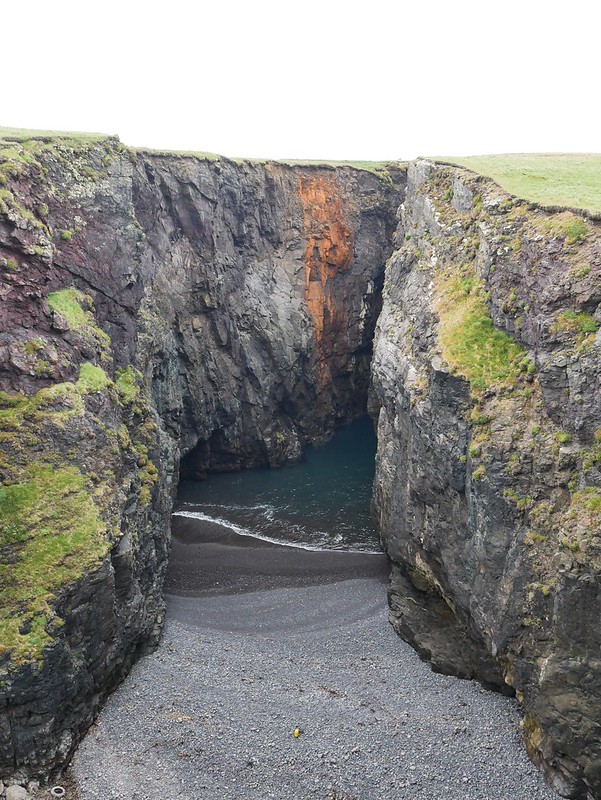 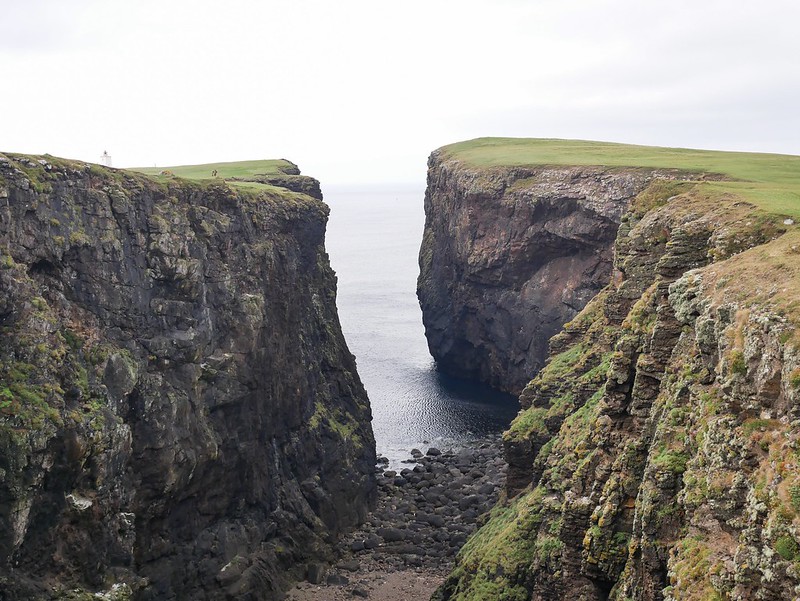 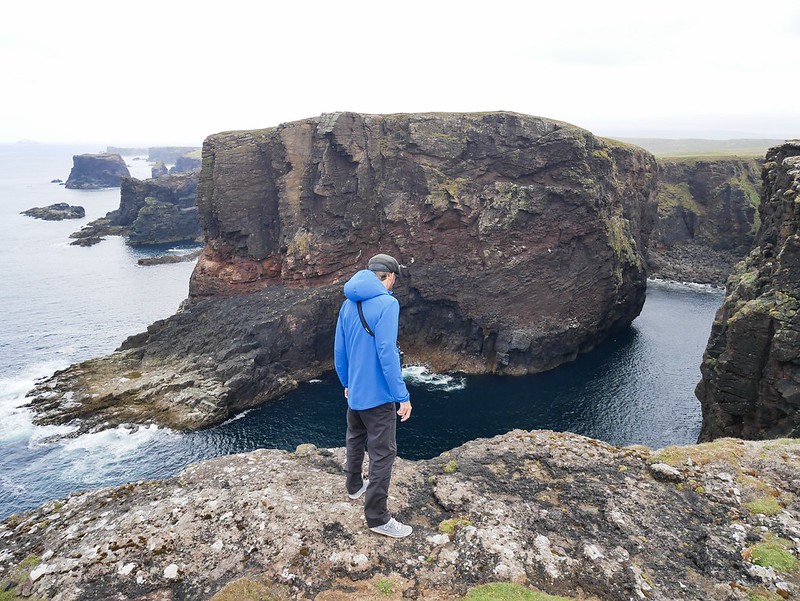 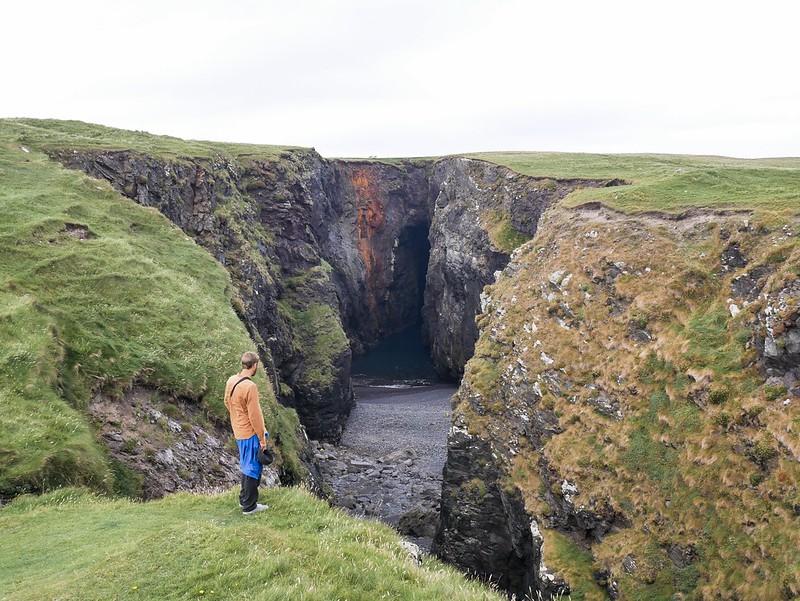 After that walk we headed to Hillswick, a tiny village set beside a rocky bay. It’s home to a wildlife rehabilitation centre, run by a couple passionate about animals. They mainly take in seals and otters, usually ones who have been abandoned by their parents. When we visited there were three baby seals in their care. The absolute show stopper was Daisy, a 6 week old seal who was found waddling along a ferry port. Apparently if a seal is abandoned they will go to land which is very helpful when it comes to rescuing them. She still had her umbilical cord attached when they found her. I couldn’t get over how big her eyes were, they were gorgeous, huge black circles with thin white edges like a quarter moon. She waddled right towards us and just stared with such curiosity. 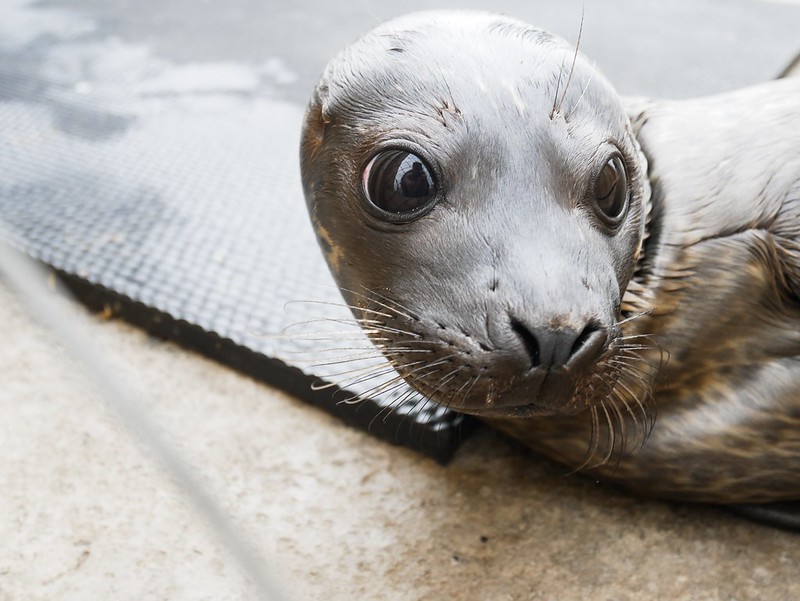 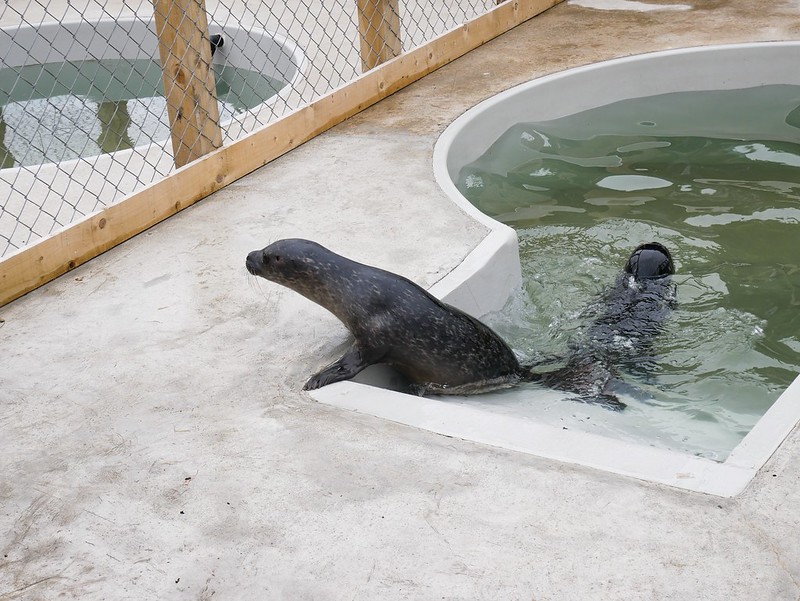 The couple who run the sanctuary do so with the aim of releasing them all back into the wild, and apparently they adapt very well to it. It doesn’t make the seals more sociable with humans in the future, they just carry on like any other seal. They will be released once they reach a certain weight and they’re fed fish into their little pools so they can learn how to hunt and eat in the wild. They didn’t have any otters in when we visited but we still had a very enjoyable time witnessing the great job they’re doing. We were also told that up until last year salmon farmers were allowed to shoot seal, remarkably Donald Trump said the USA wouldn’t buy any salmon from Scotland if they shoot the seals so now it’s illegal to kill them.

When the weather was a bit better the next day we hiked around the Hillswick headland. We were high up on the cliffs and got some great vantage points of the bizarre rock formations rising out the sea. One of them looked like red rock spires, reminiscent of the desert scenery in Arizona, yet it was bizarrely rising out the sea. The cliffs opposite us also donned the beautiful terracotta coloured cliffs. 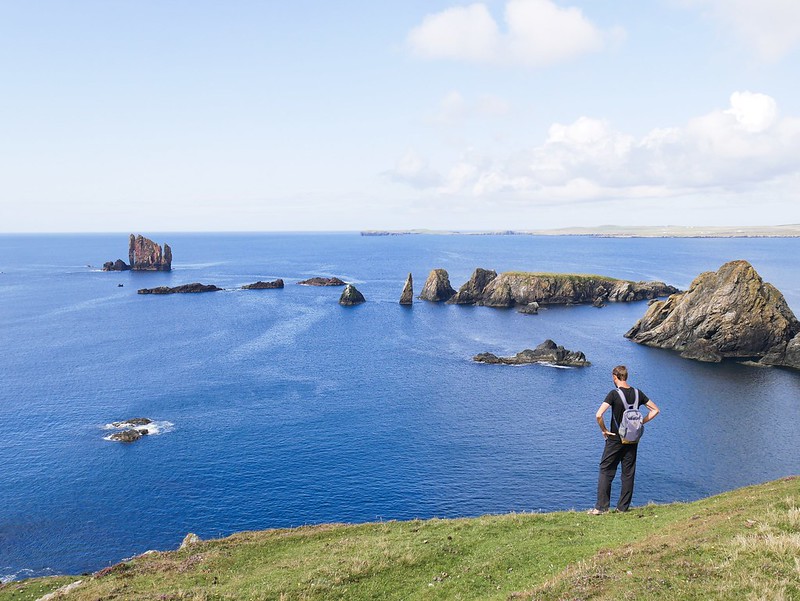 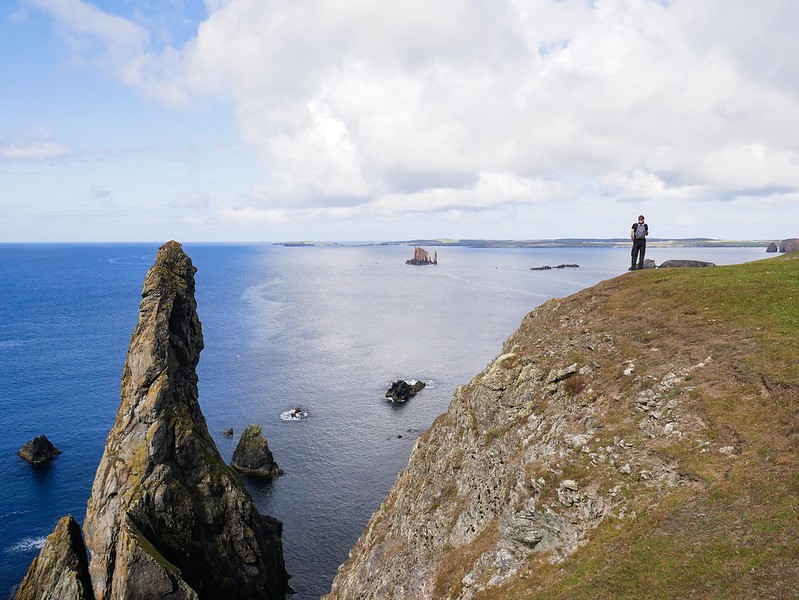 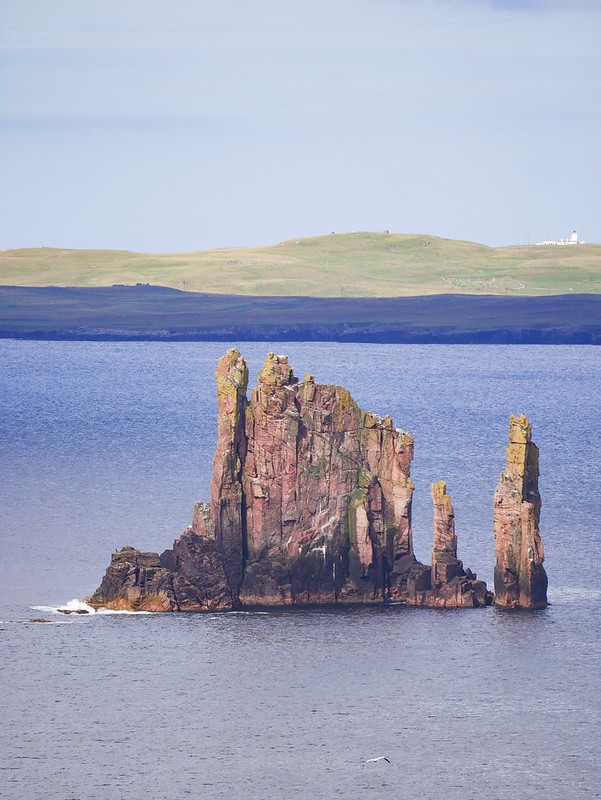 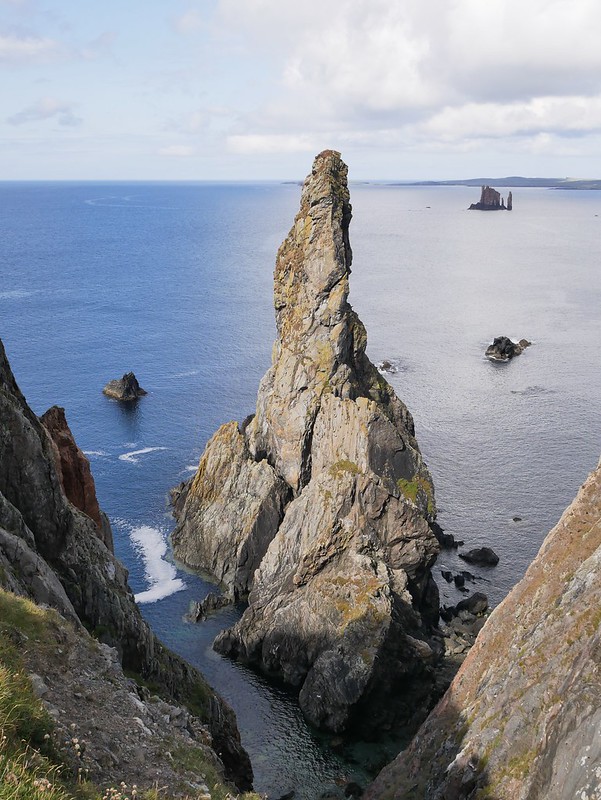 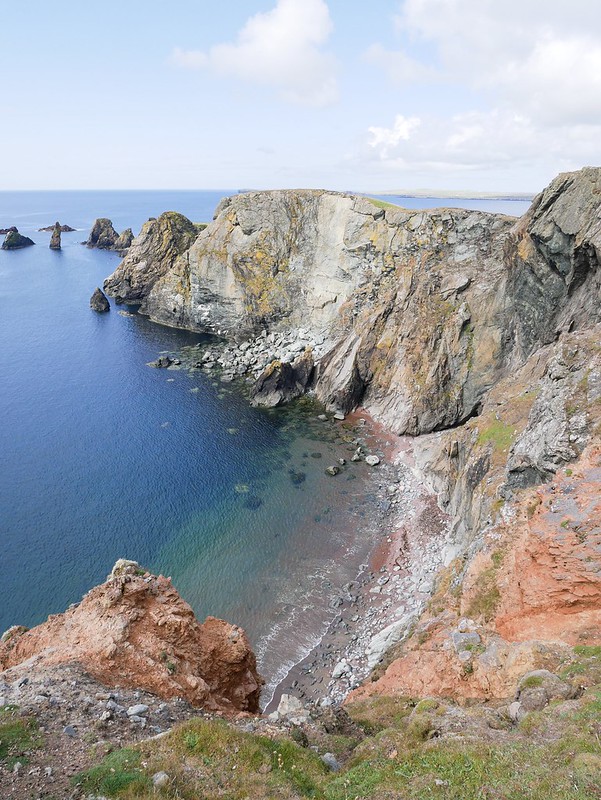 With some news about a pod of Atlantic white sided dolphins in an inlet to our south we decided to make a move and try and see them. It ended up not really being worth it as they were so far away and extremely good at vanishing for hours before reappearing. But hey, at least some cetaceans have made an appearance at last. 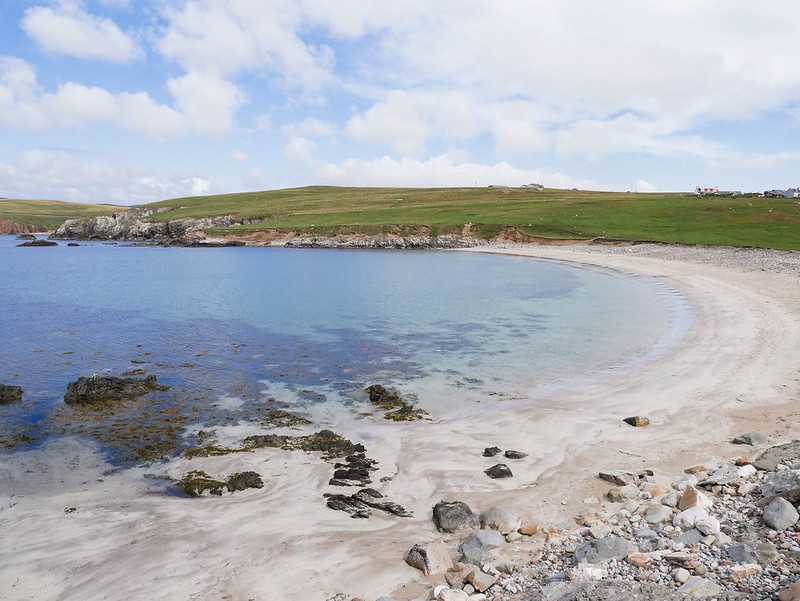