The main island of Shetland is quite large and we whizzed through it when we first arrived, so now it’s time to explore the area. Our first stop was a wonderful hike on the small island of Muckle Roe. The hike led us along the western side of the island and the scenery was spectacular. It started with a couple of idyllic beaches way below us with red sand and matching coloured cliffs. There wasn’t any access down to them which was fine by us as we usually prefer the view from up high as we can appreciate how clear the sea is and here was no exception. The water was twinkling in the sun and a gorgeous turquoise colour. Instead of human footprints on the sand there were otter tracks, it was such a beautiful area, but we only got to enjoy it at its finest for a few minutes as a damp cloud swept in. We were instantly covered in condensation and the view went hazy but it was strangely sunny at the same time. 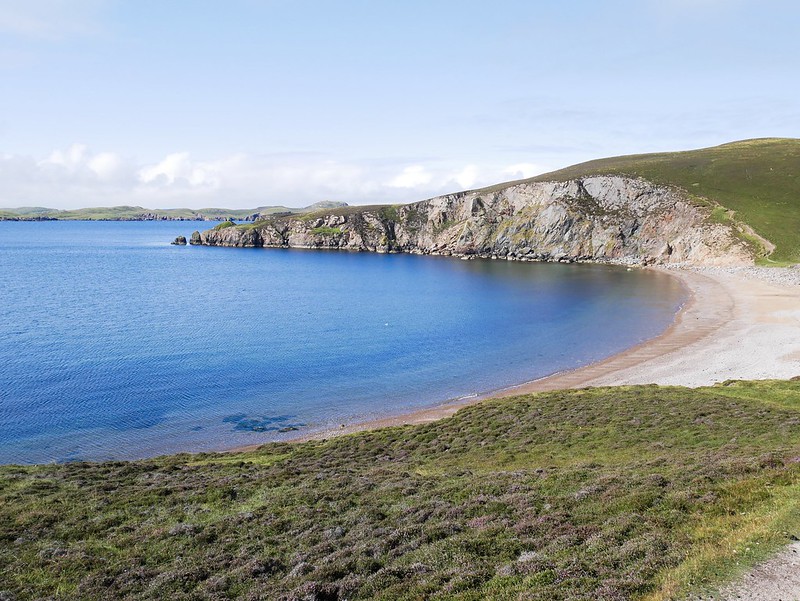 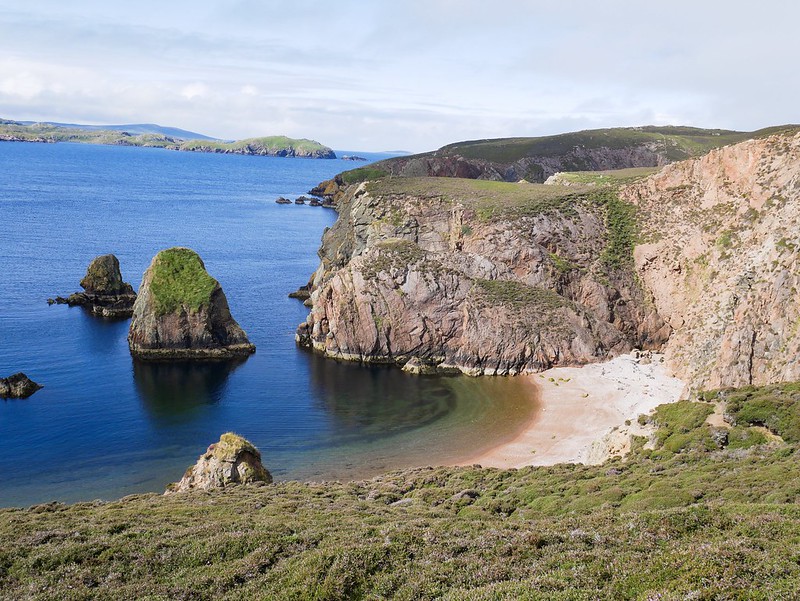 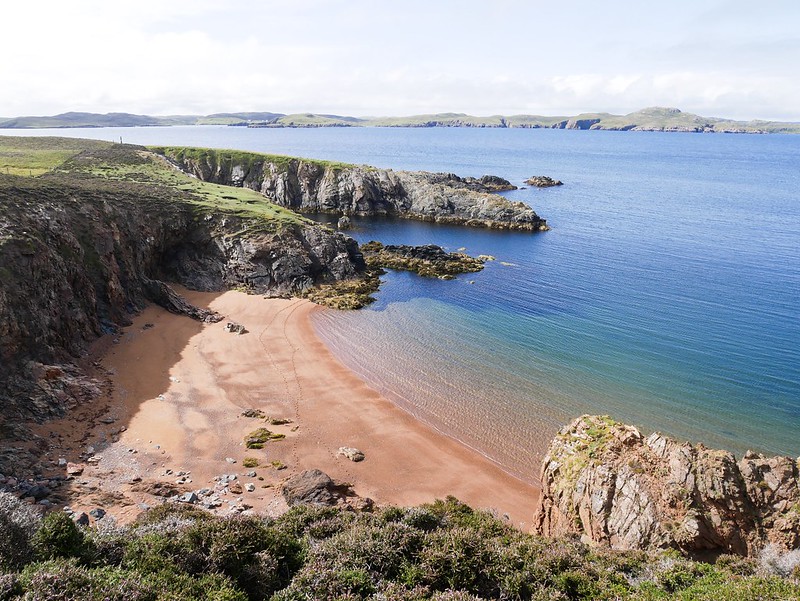 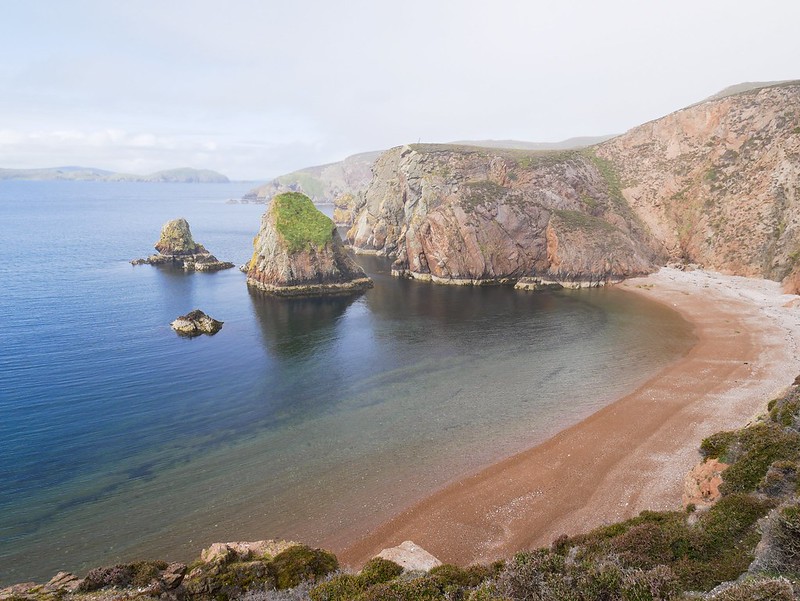 The very rough and non-existent at times trail took us high up the cliffs where we had views down to the occasional seal basking on a rock. We reached a really stunning area where the cliffs were terracotta, it looked like a piece of Utah desert had been transported to Shetland. There was also a large orange sea stack in front of us and as if the view couldn’t get any better, the wet cloud and sun treated us to a vibrant rainbow. 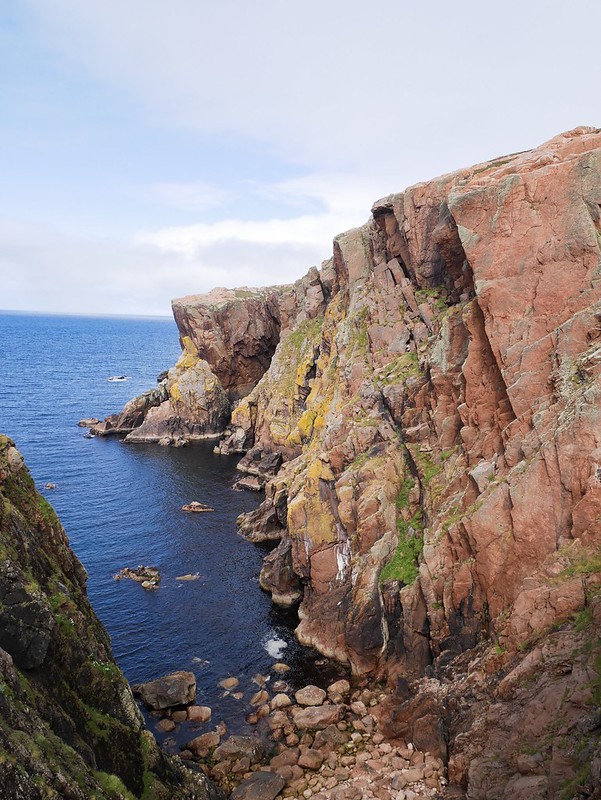 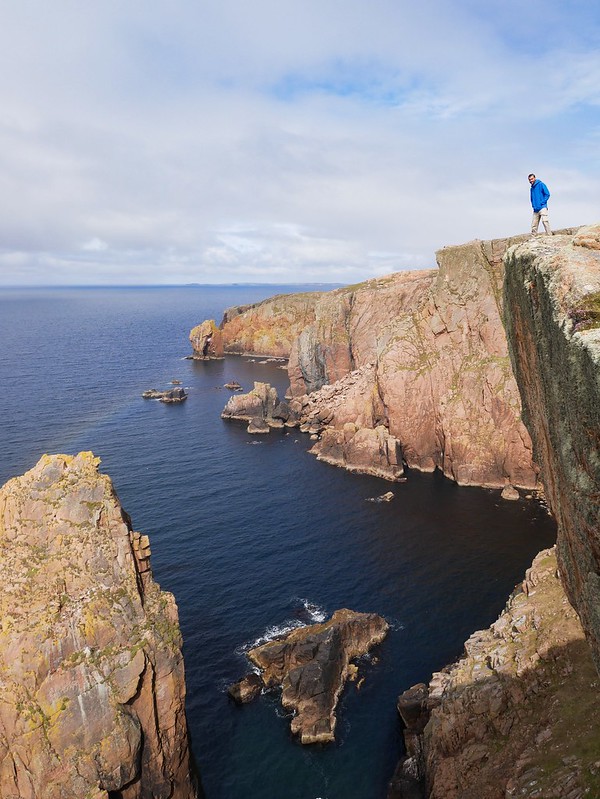 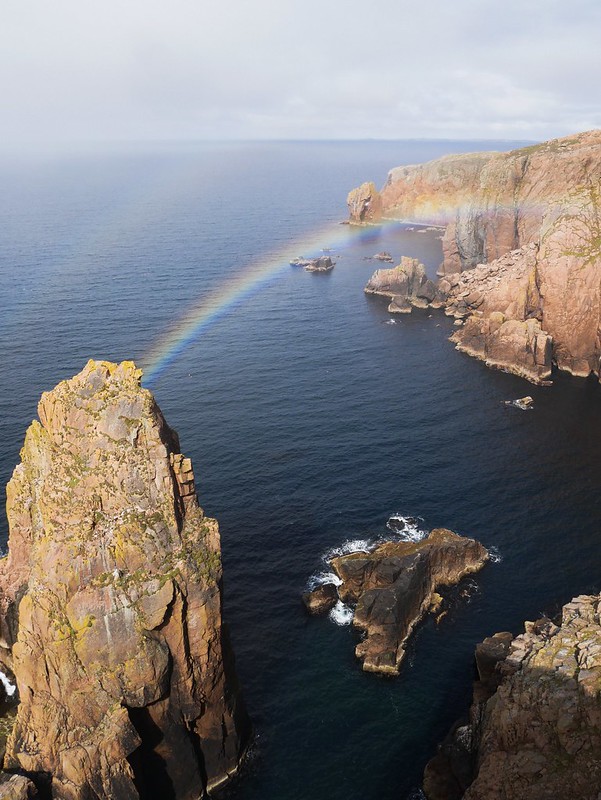 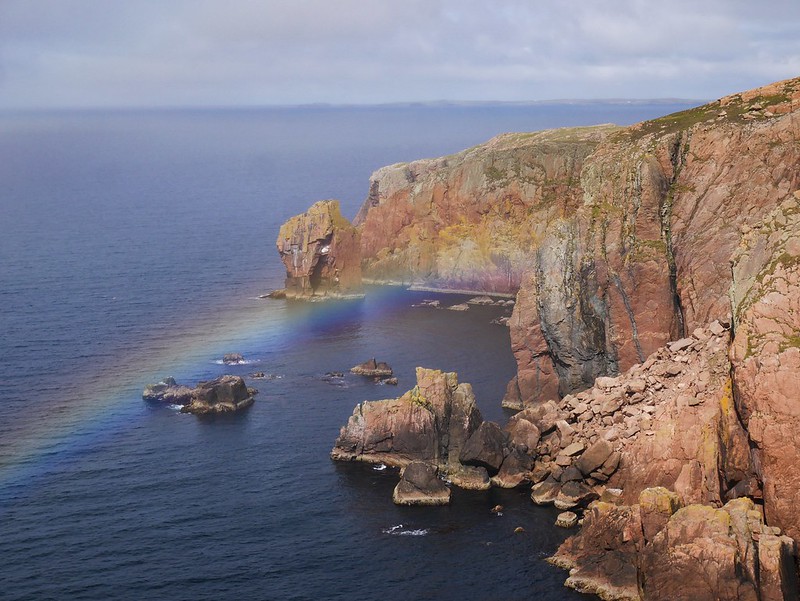 The hike was recommended as a loop trail but we wanted to maximise our chances of seeing cetaceans so we returned back the same route. It was a beautiful landscape even away from the sea though, with rugged moorland, glistening lochs and hills covered in purple heather. 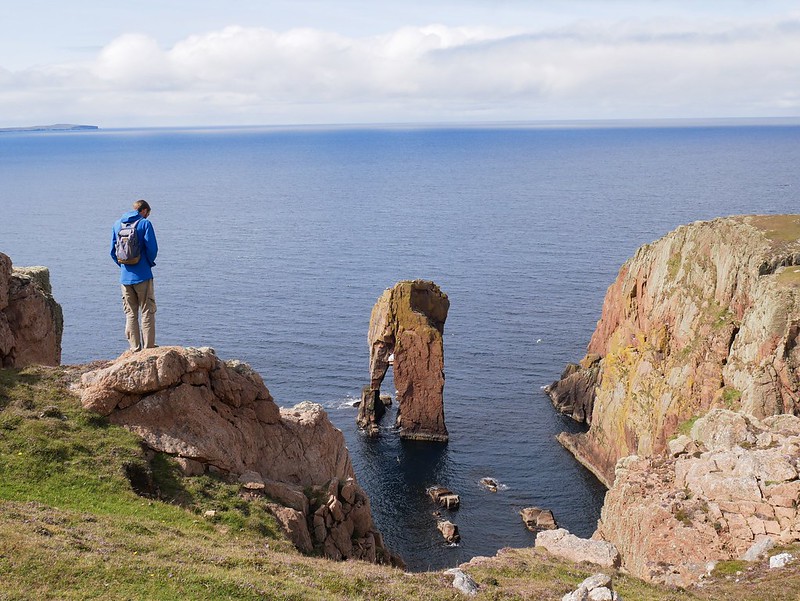 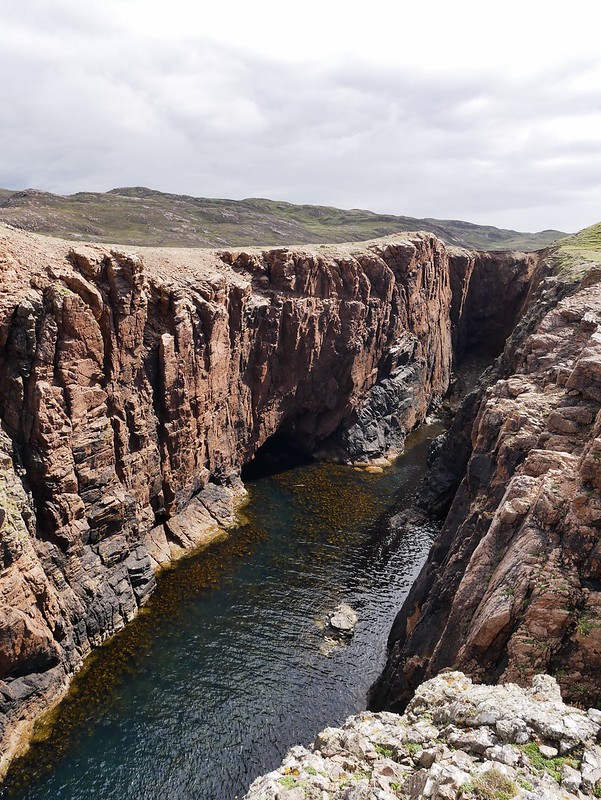 Another fab hike we did was up to Uyea Island, described as one of the wildest and most challenging hikes in Shetland. It’s a spot I actually discovered on google earth, where white sand beaches connect the island to the mainland. It looked so tropical and appealing but it was going to be a very long route, about 17km along extremely rugged terrain. It’s surprisingly exhausting walking in Shetland, even on flat routes as there’s very rarely an actual path. This means we’re usually walking on lumpy moorland or following overgrown sheep tracks. 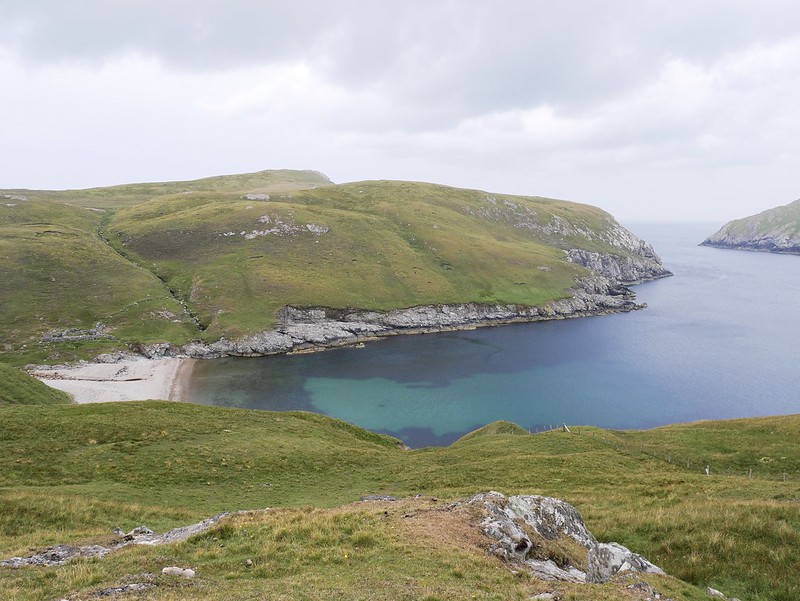 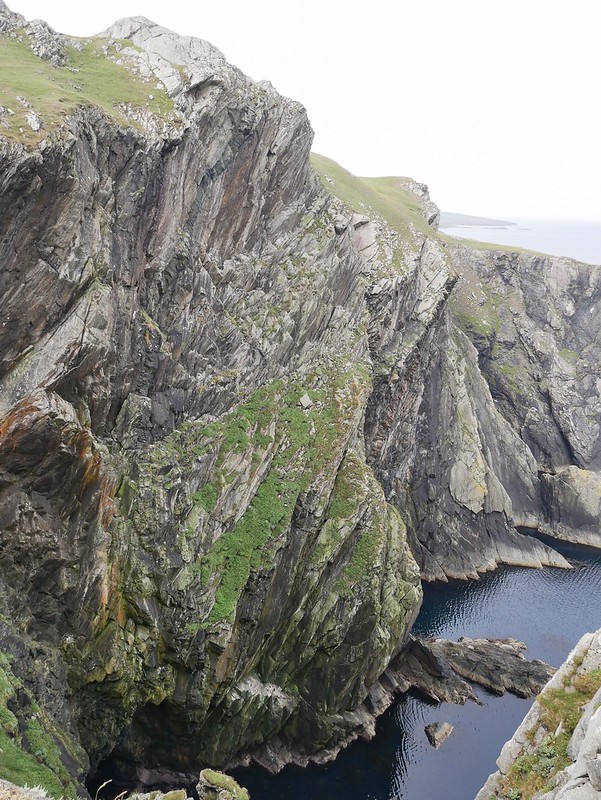 The hike involved a lot of steep up and downs along the cliff tops but there were some incredible views of the sheer cliffs dropping down into the dark sea with seaweed swaying along the shores. One steep section had a little beach nestled between the cliffs and at the back was a massive slab of earth that had fallen down from the cliffs where we were. 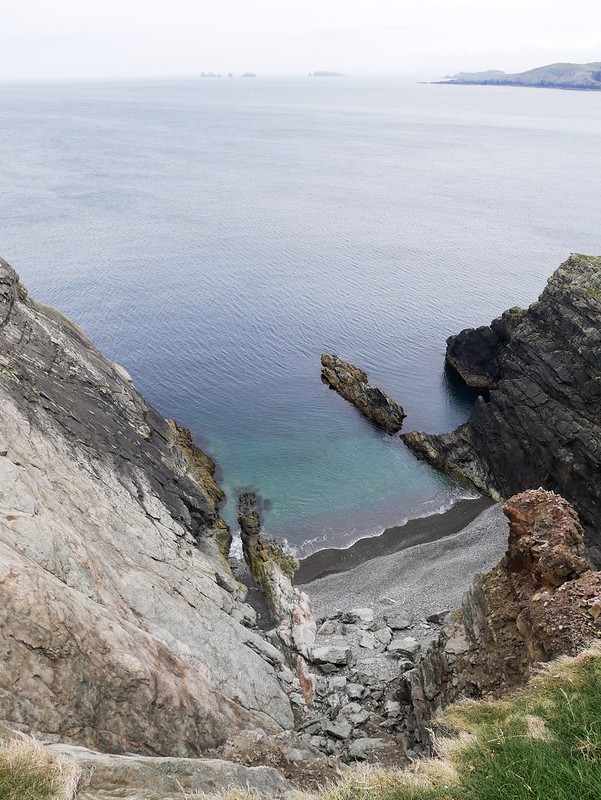 Eventually we spotted some emerald water behind some rocky islands…we were almost there! I was speed walking by this point with excitement. We got our first proper view of the area and it was stunning, the sea was shallow for a long period with white sand below. There were dark rocks and small areas of seaweed visible through the water which emphasised how clear it was. Small rocky islands rose out the sea and after pondering for a couple of days about whether it was worth the long hike I was gloating to Craig about what a great decision it was, and we hadn’t even reached the best view yet! 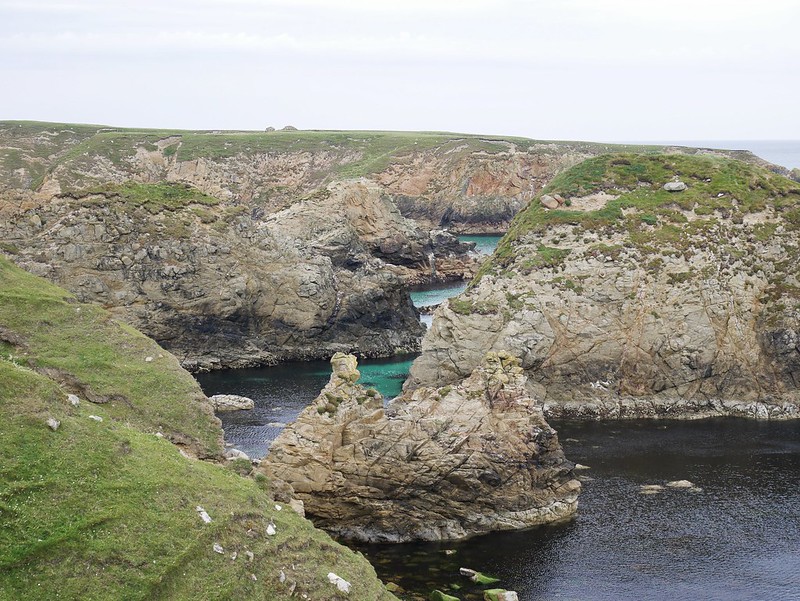 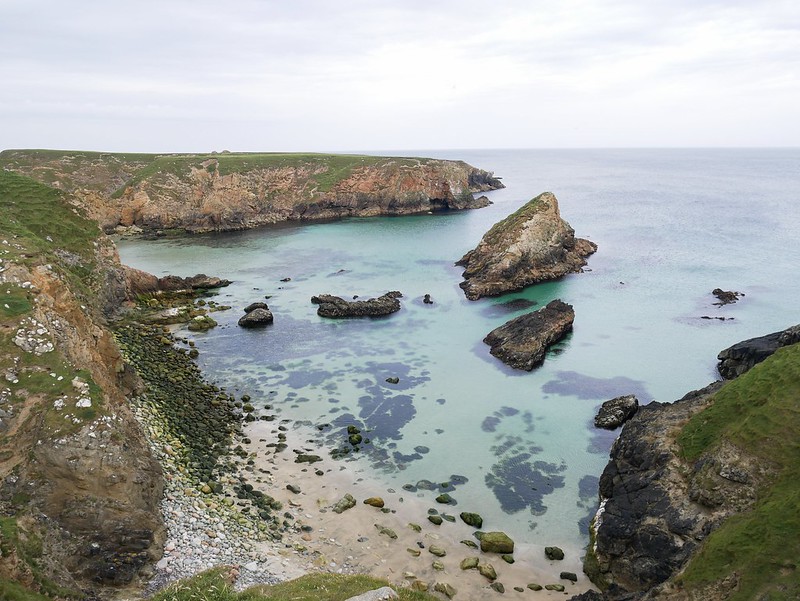 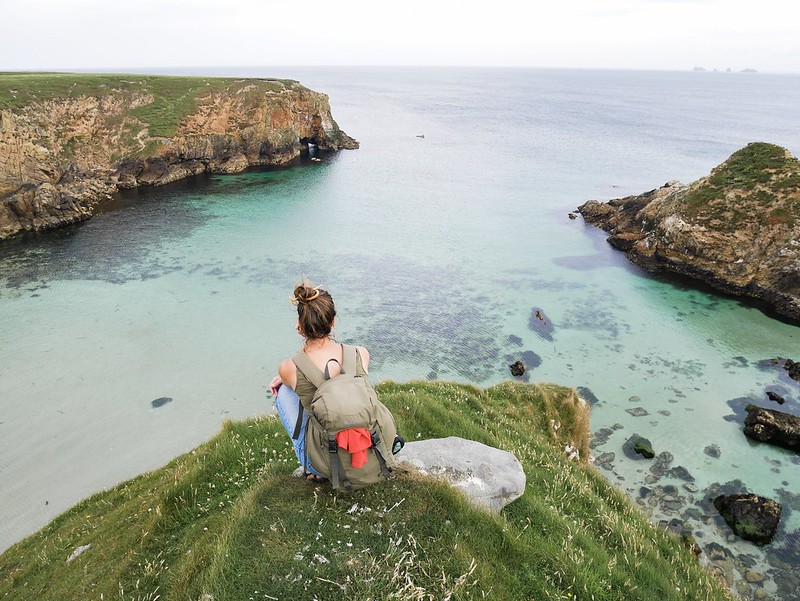 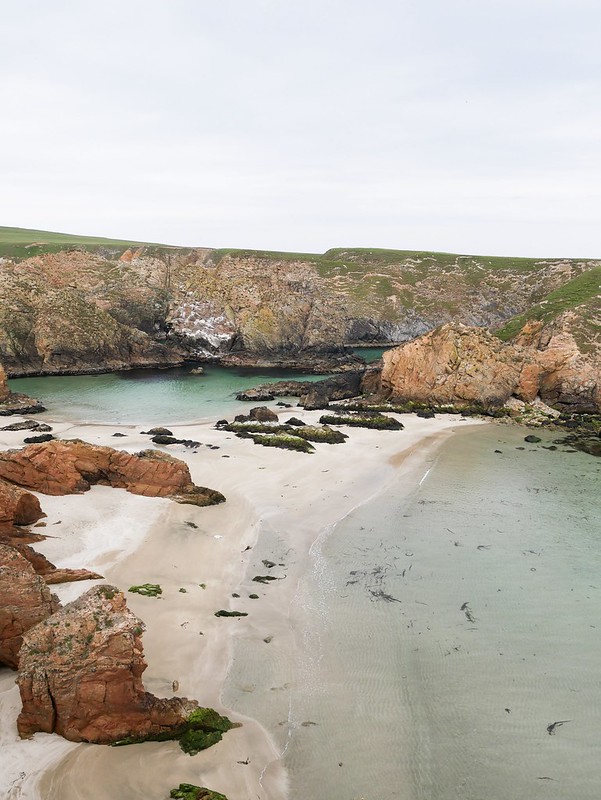 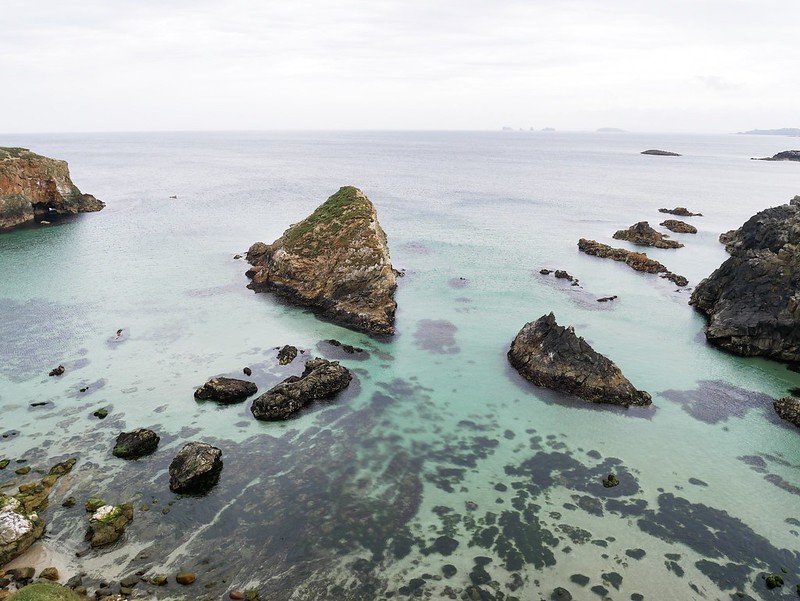 Just a short walk further around the headland revealed three beaches below us. They all shared the same pile of white sand in the middle but the sea came in from three different angles, forming the multiple beaches. The water was an incredible turquoise colour, almost emerald in the deep sections and with the rocky walls and islands we felt like we were back in the Philippines…the only difference was the fact that it was 13° in Shetland! 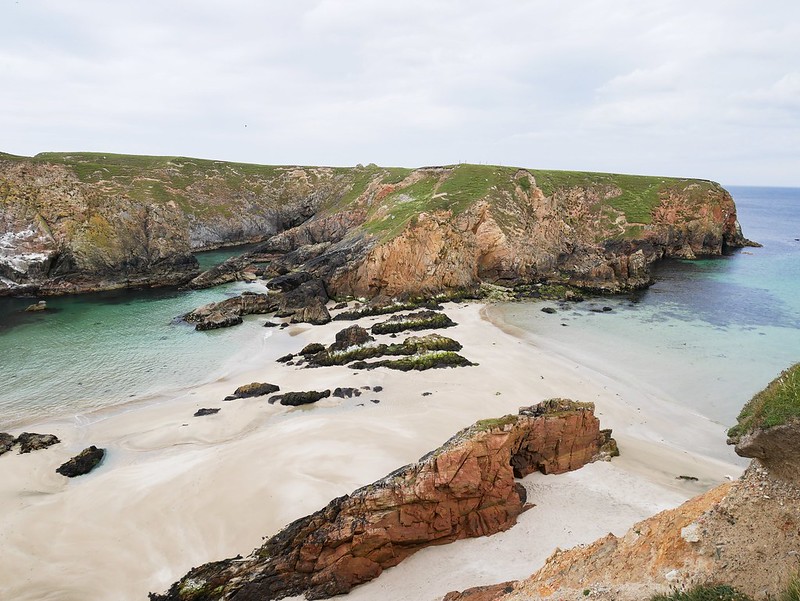 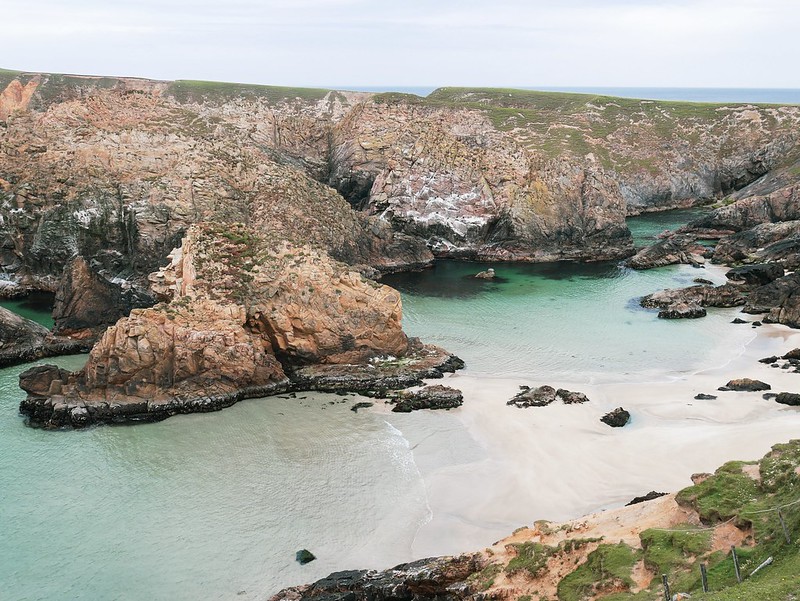 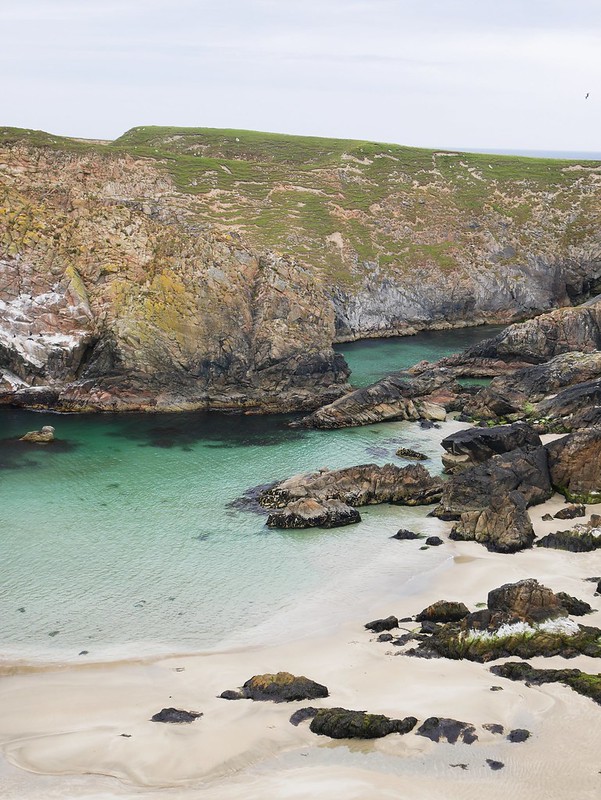 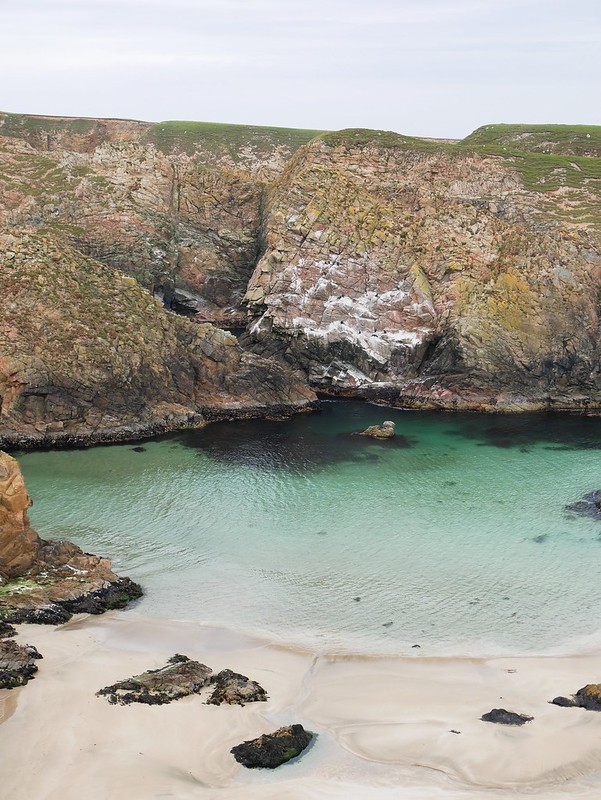 We discovered a steep route down to the beaches which involved holding onto a rope and easing ourselves down through a slippery section of dust and rubble. We were the only people on the hike, and of course the first footprints of the day…a novelty I will miss when we leave Shetland. It was a long old walk back but boy were we happy we made the effort. 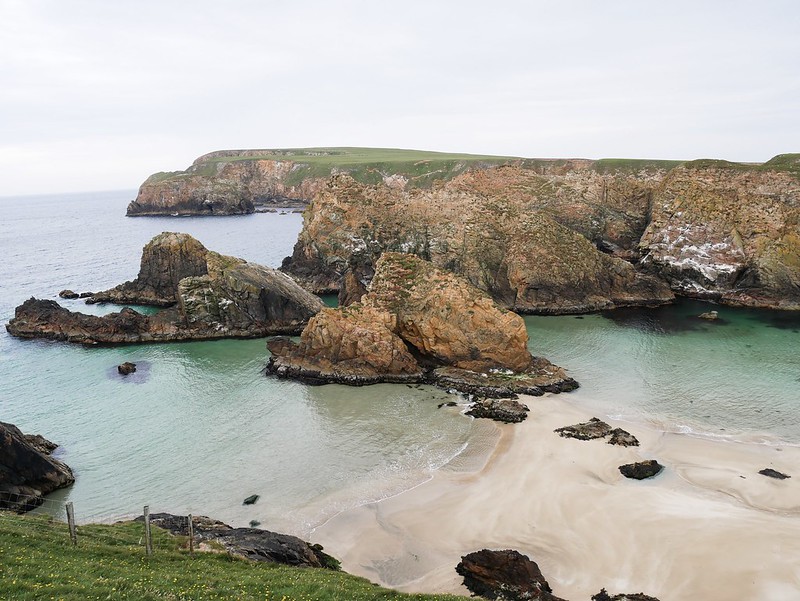 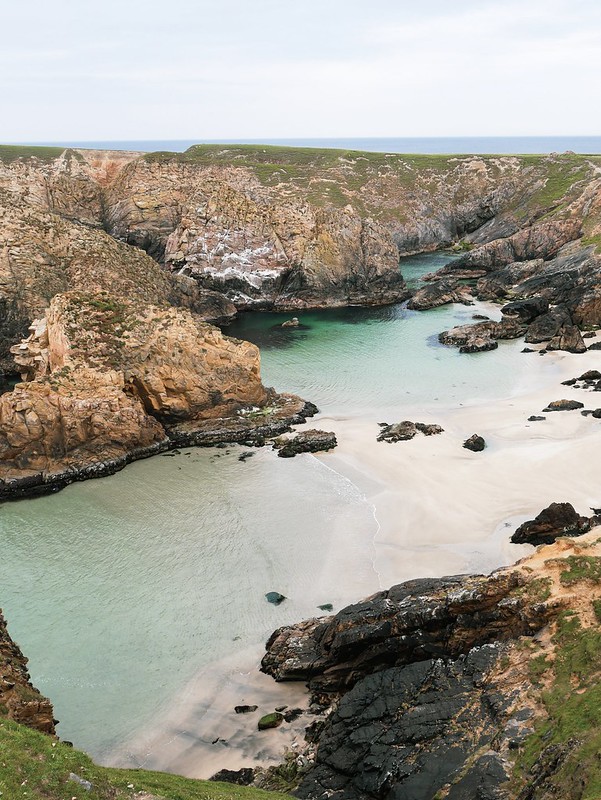 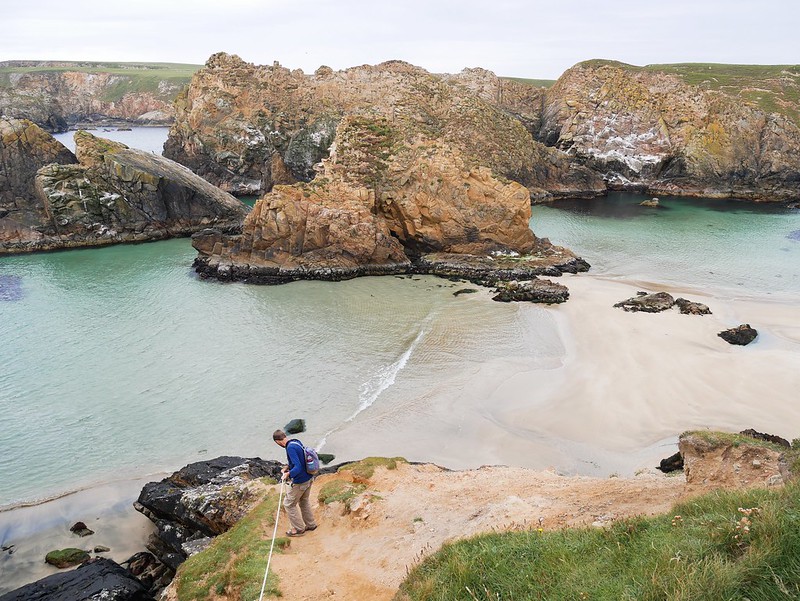 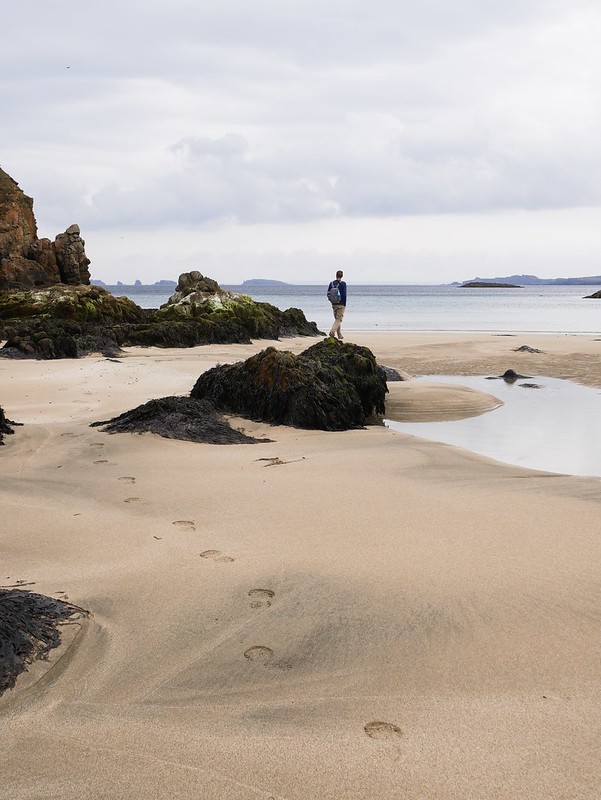 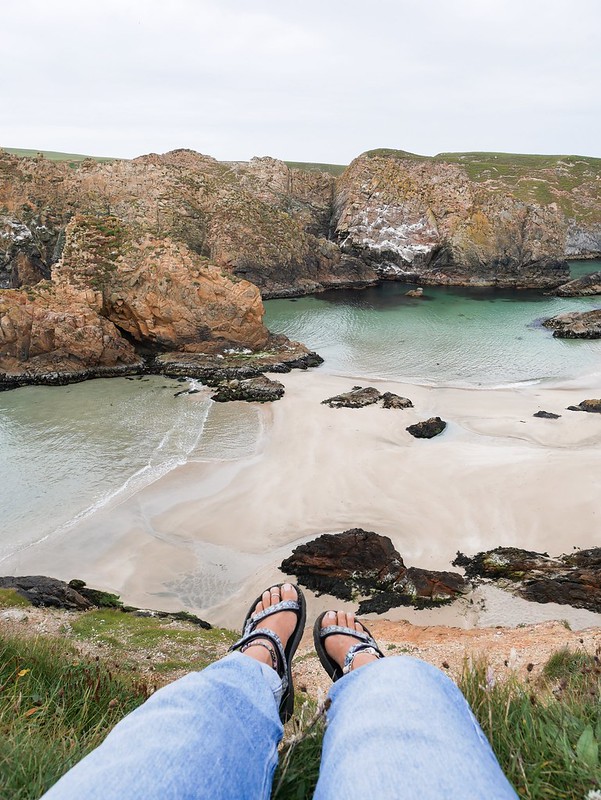