St Ninian’s Tombolo is a sandbank that connects the mainland to St Ninian’s Isle. It’s accessible even at low tide unless there’s very high tides and rough sea. It was a cloudy day – in fact a local we spoke to said they’ve had nothing but cloud for three weeks, so the beach didn’t look like the Caribbean as it would do in sunshine but alas, it was still very beautiful with two curved bays and calm blue water. 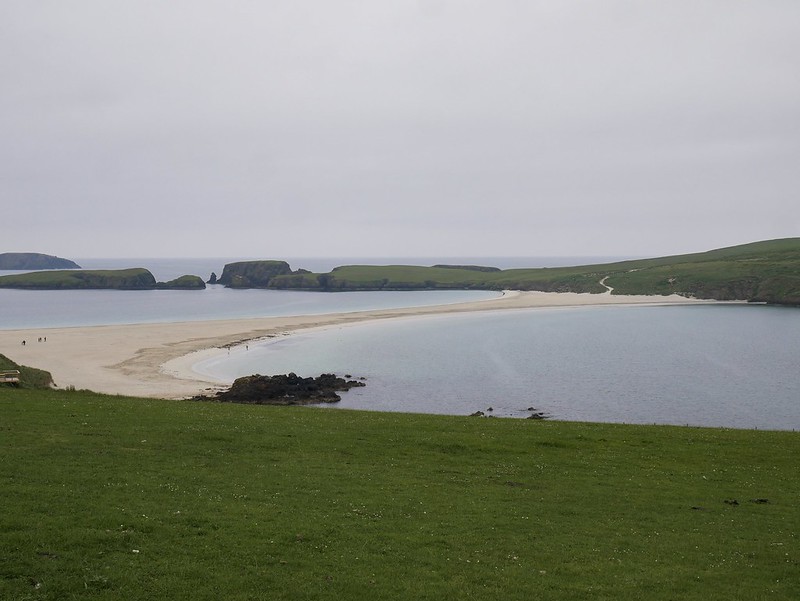 We followed the beach across to the island and began the walk in a clockwise direction. I don’t know what I was expecting but I found the walk so beautiful. There was kelp forest swaying in the sea below us and clear turquoise water beyond it. Fingers of land stretched into the sea with grassy tops and sheer edges. We spotted a very cute seal lounging on a rock, with huge glassy eyes gazing up at us. 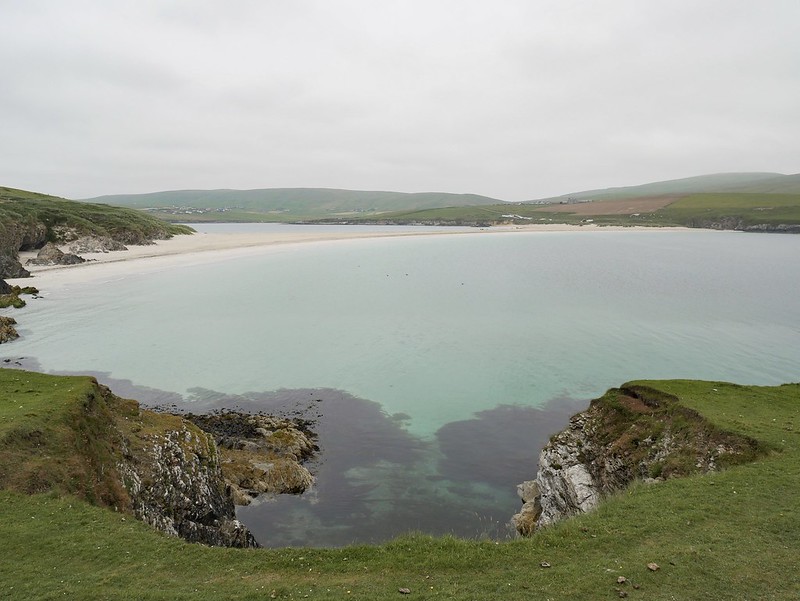 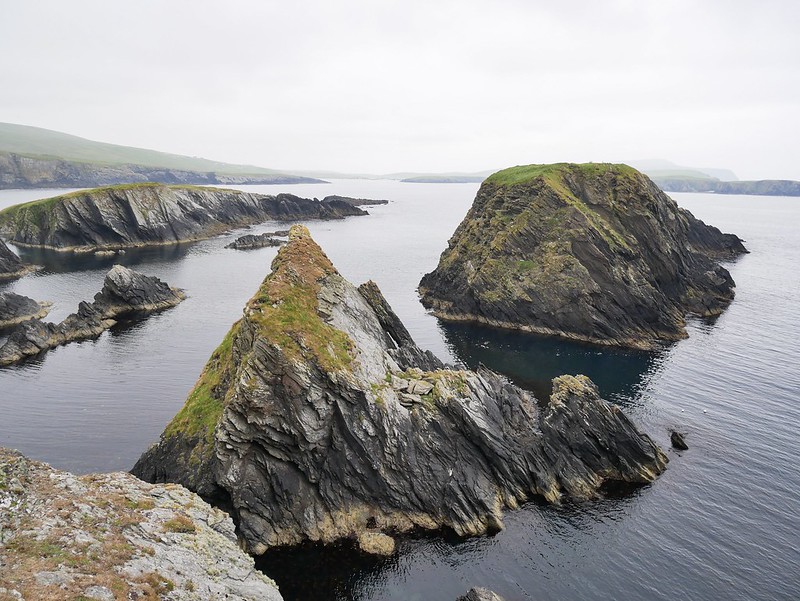 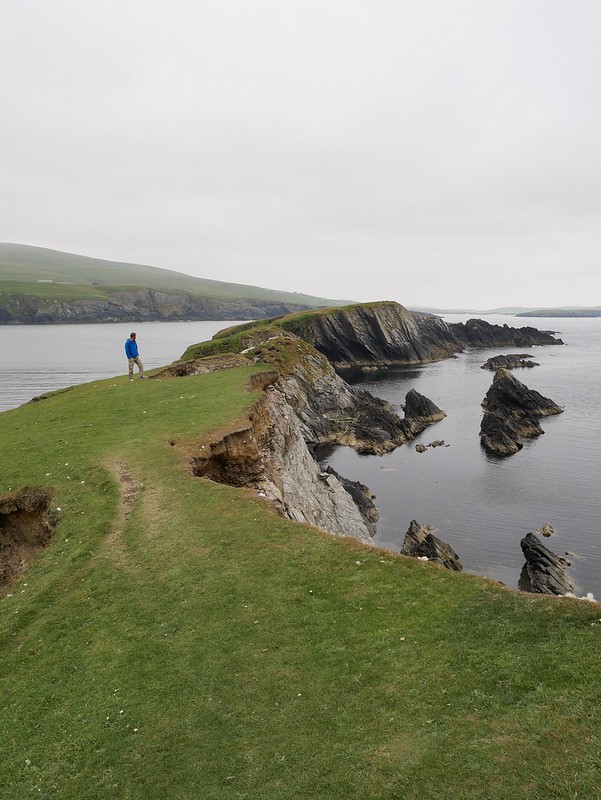 The island was used for sheep farming and the amount of sheep shit on the ground was unbelievable. There was more shit than grass and our shoes were caked in the stuff…I admit now that sandals with socks was a terrible idea as I not only had shit on my sandals but also my socks, maybe thats why the trend never took off. We reached some high cliffs on the north side of the island and on the cliff tops opposite us were a few walkers, it was impressive to see how tiny they looked in comparison to the sheer walls that they stood atop. Below us we could see seals swimming through the clear water and we were constantly keeping our eyes peeled for any cetaceans. 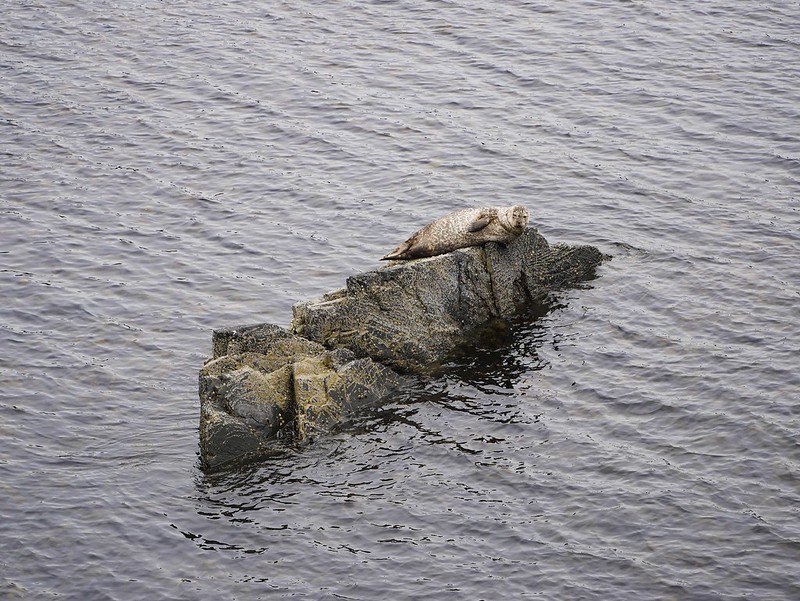 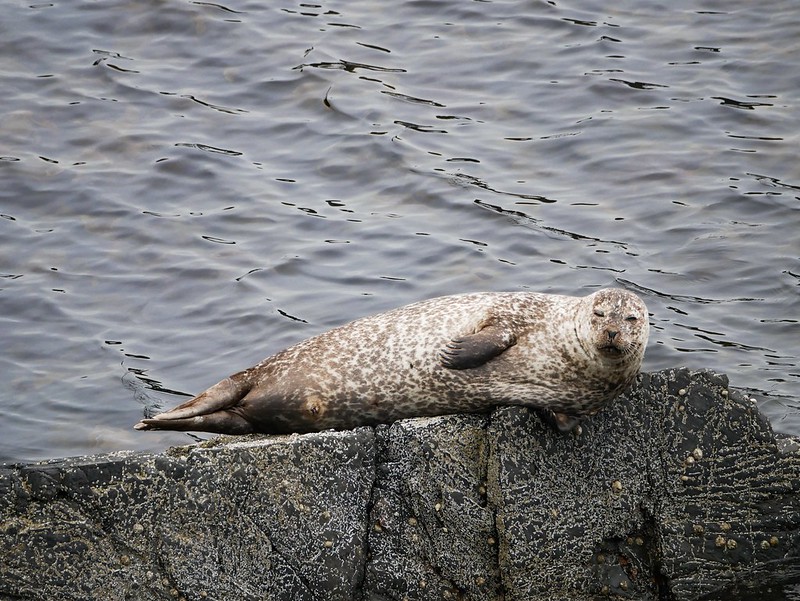 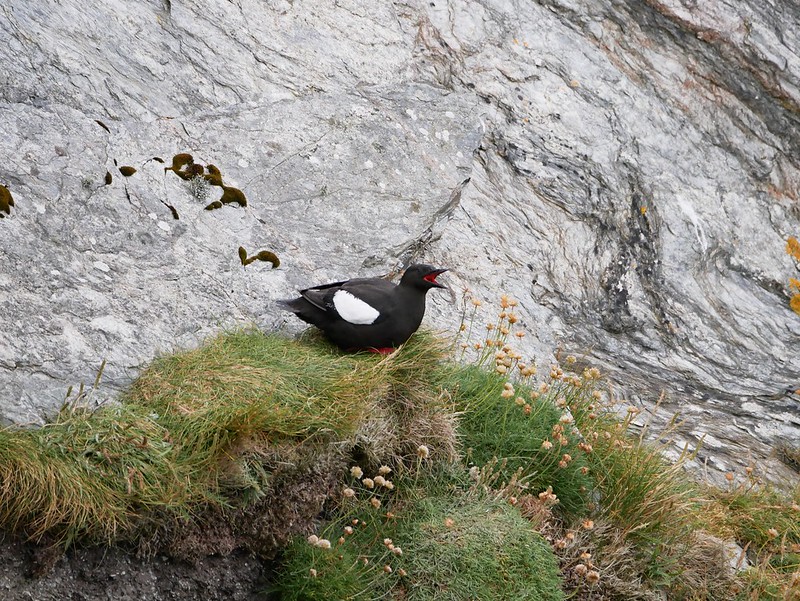 It was just a 6km walk but it ended up taking a few hours as we stopped so many times to take photos. 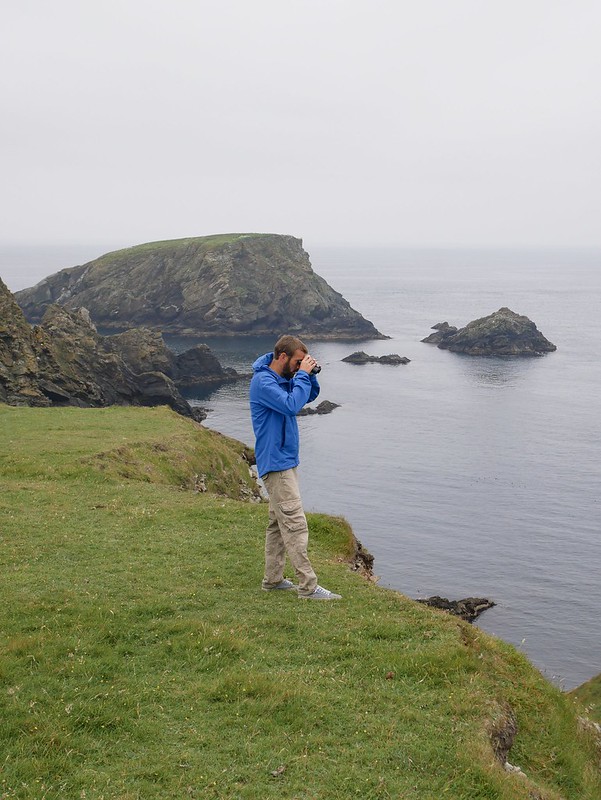 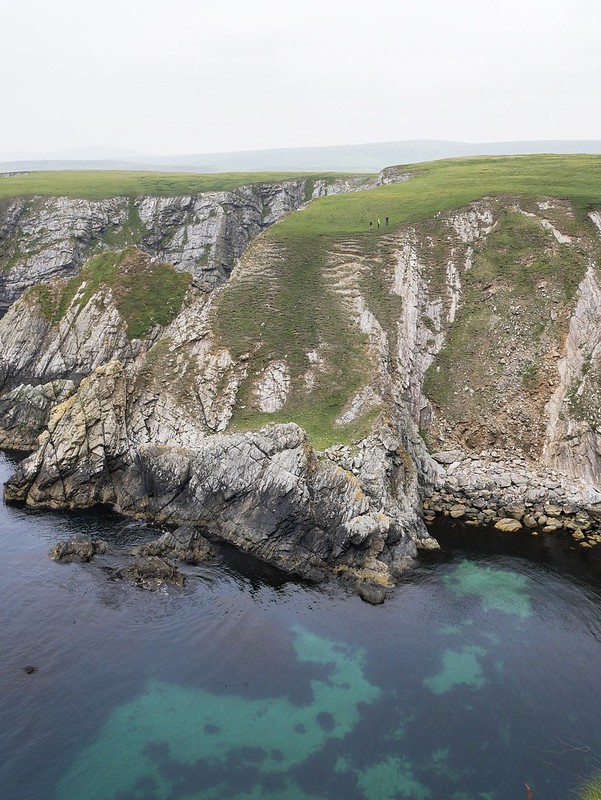 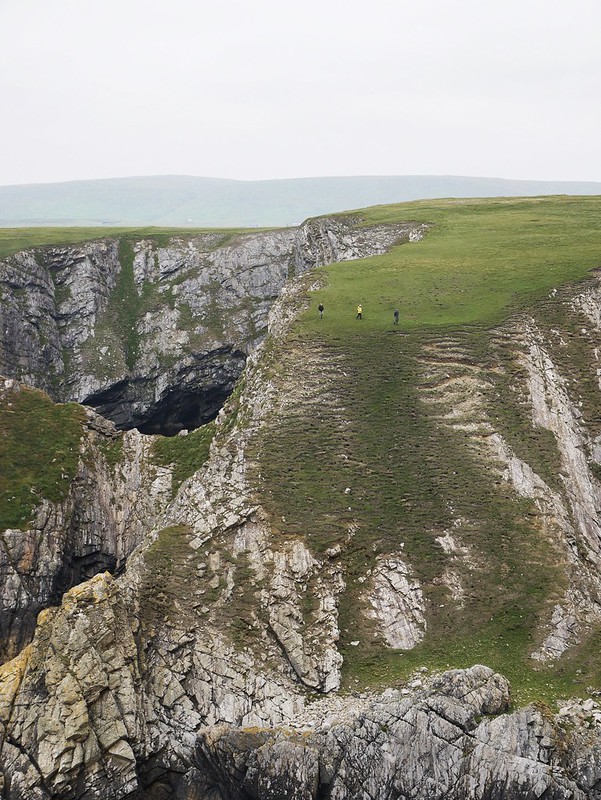 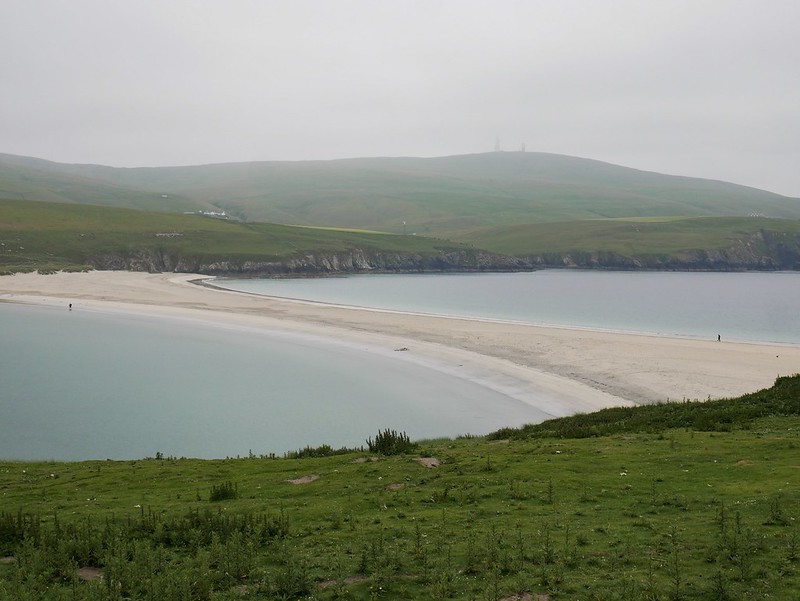 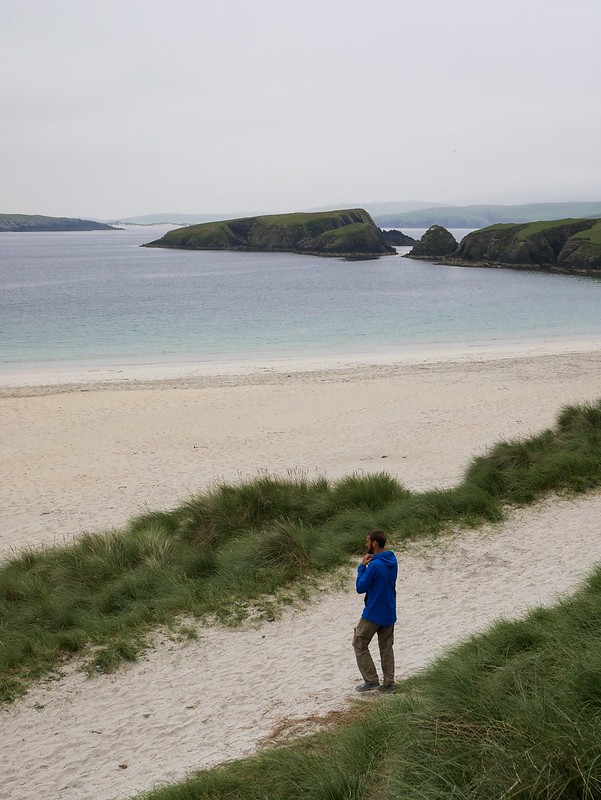 After the hike we drove to the east side of the mainland to eat our lunch with a sea view and then we continued north to Catfirth area where dolphins had been spotted recently. In fact there had been a huge pod of them milling in the inlet but they’d all left a few days before. It was a lovely and quiet area so we continued the drive anyway and ended up at Ling Ness where there was a hike on my map. Finding a parking space for the hike really gave us an idea of how untouched Shetland was – it was a single track road so we couldn’t park in a passing place, and there weren’t any designated places to park for the hike so we had to pull up on the side of a turnaround area by someone’s house. We weren’t blocking anyone but it pretty much meant only one car could park up to do this hike. We stepped over a metal stile and landed in an overgrown meadow. There wasn’t a defined path or trail it was just wild meadows and we were on the official route which was funny. We headed towards the coast where we ended up on a gravel causeway area and a pretty little beach. Another reality check for us was some locals just left their paddle boards and kayaks on the shores without any locks on them. There was one main house on this spot of land and it had a couple of flags swaying on poles. We were trying to figure out what they were and after some googling we discovered it was the Catalonia flag and the Jordan flag…but no Scottish one in sight which we thought was a little odd. The house was such a dreamy cottage though, it looked like the perfect little house whether it was a hot summers day sitting in the flower filled garden or a blustery winter evening with a roaring fire inside. We continued the hike along the headland and as we walked over a rocky ledge we suddenly spotted an otter in the water below us. It was so unexpected that I excitedly pointed and whispered “otter!” at which point he scarpered. Now we know next time we see one we need to be totally still and silent.

We spent the night parked up right by the sea on the outside of a village. It was a good location to spot whales passing through the channel between the islands but all we saw was a curious seal popping up and staring at us.