With a night sleeping on an airport chair we set off towards Santiago, Chile with stops in Seattle and Atlanta. We were zombies after two nights without sleep and we arrived to some slimy substance covering my bag strap. We bought a bus ticket to the city center and asked a lady (in terrible broken Spanish) if she knew where it was. She pointed up the road and stormed off as if showing us the way so we quickly followed. She hopped onto a bus, the doors slammed shut and it drove off without us. We eventually arrived in the city and walked to our homestay where we had to stand outside for thirty minutes waiting for the owner. A random chap came by and started speaking Spanish to us. I can speak the basics so I replied to what I knew and told him in Spanish I don’t understand and I only speak a little Spanish. Then the man replied in English to us and said we are in Chile now, not England so we must know the language. I really wanted to slap him. We were so jet lagged and he was the one that had instigated the bloody conversation! Luckily our host was much friendlier and spoke superb English, his cleaning skills however were not on point and the bed was scattered with the previous occupants hair. Craig unpacked his towel to take a shower and discovered that he was in fact the culprit for the slimy mess on my backpack – his shower gel had exploded everywhere. Welcome to Chile! 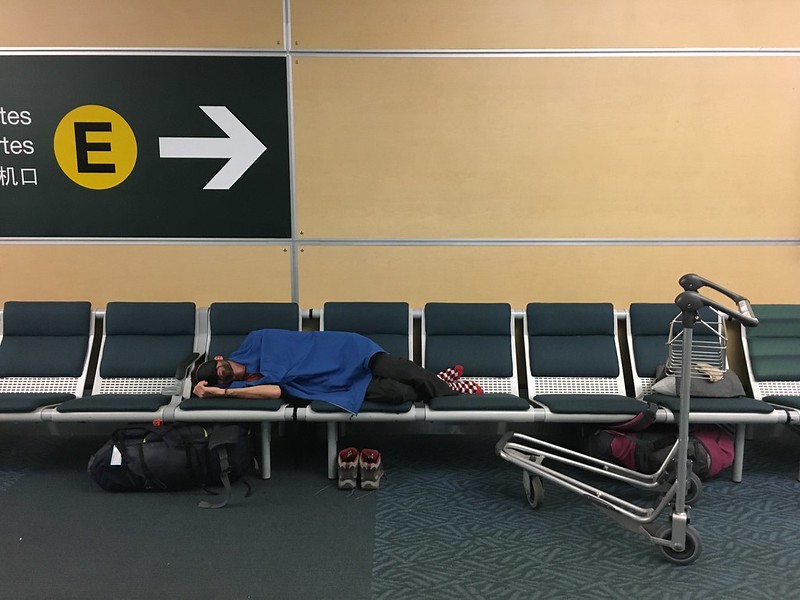 We headed out into the city searching for a place to eat while taking in some sights. It was a very European feeling city, calm and fairly clean and we got a nice vibe from the locals. There was a protest of some sorts at the Plaza de Armas with a beastly riot truck and police riding horses so we quickly made u turn and left the area. Hot dogs were for sale everywhere and they cover them in avocado, mayo and ketchup – I was contemplating asking for one without the actual hotdog, just the avocado in a bun. 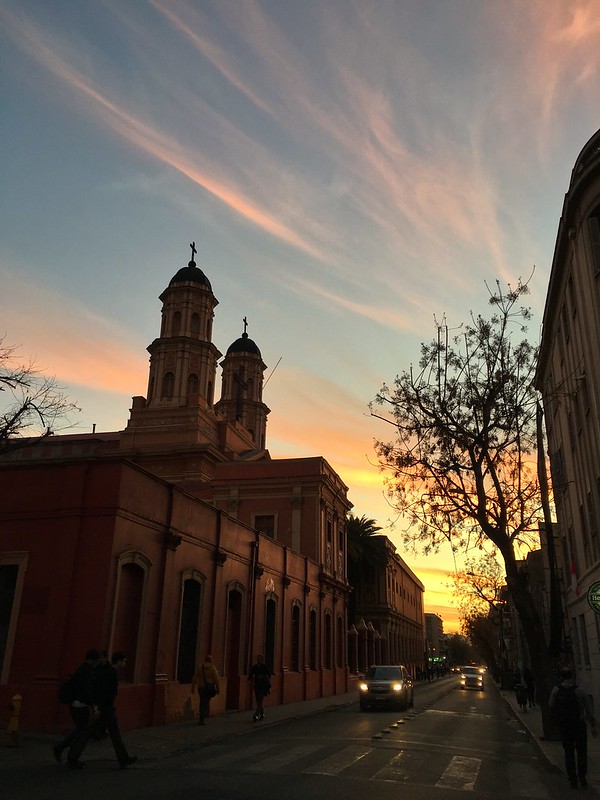 The following day we happily checked out and moved across the road to a brand new hostel that looked more like a boutique hotel with crisp white sheets and a common area that resembled a funky Scandinavian cafe. We set aside a full day to do some planning seeing as we had no idea where to go first, all we knew was Patagonia was the goal. I found a nice sounding area in the Chilean Lake District further south, home to perfectly symmetrical volcanoes and azure lakes. Just as we were about to book the flight for $125 I noticed there was one for just $25 five days later. It seemed crazy to pay so much for the same flight so it was decided, we’d stay in Santiago until the cheap flight.

Santiago has one huge hill in the centre of the city which most tourists (and locals) head up for a view of the city but it really didn’t sound like our thing. We hate cities and our host described the view with such enthusiasm, saying “there’s no end to the city, it continues in every direction as far as the eye can see” as if it was a good thing. All I wanted to see from the hill were the dramatic snow capped Andes in the background so we opted for a mini hill instead. It was basically a well groomed public park but we had to sign in with security before entering. The chap spoke very good English and was excited to practice on us. He asked where we were heading so I said “just up the hill for a view”. I put my foot in it there, turns out it’s not ‘just a hill’ it’s the exact spot where a battle took place and the city of Santiago was founded, kind of a big deal.

So we headed up the hill which was layered like a fancy cake with steps taking us up and around until we arrived at a platform with a view as disappointing as I’d expected. The Andes were visible at least, but they were very hazy. They actually create a boundary so the city smog can’t escape and one local we spoke to had a giggle saying the mountain range stops Chile from transporting their smog across to Argentina. 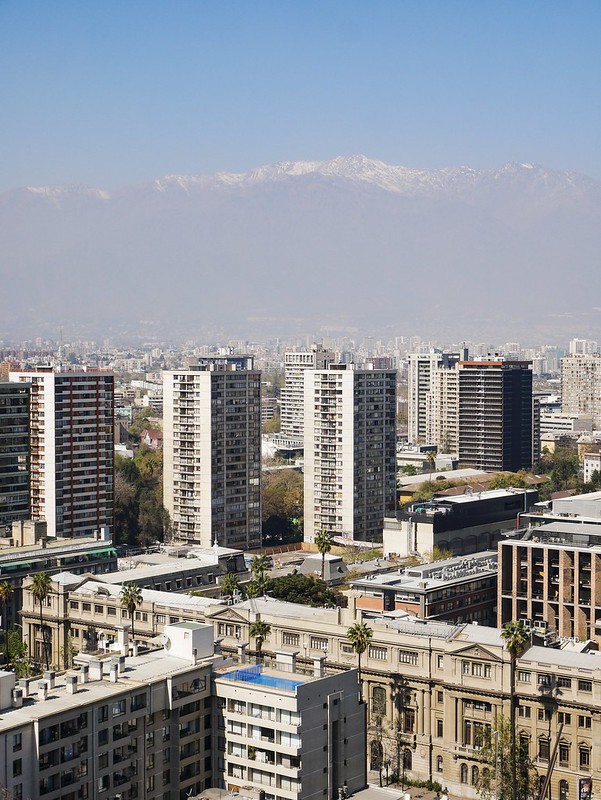 There were some interesting neighbourhoods to explore with lots of handmade crafts and jewellery stalls set up along the streets. Graffiti covered the walls and locals drank cheap beer in the tables spilling out onto the pavements. The sun was shining so we decided to join them and enjoy a well deserved tipple. On our way back we went to cross the road and suddenly a bus was literally right next to Craig driving parallel to him. He was millimetres from being hit by the damn thing and the side of the bus scraped along his arm while Craig sort of stood in this awkward limbo trying to balance his body away from the bus. I just awkwardly watched, sort of frazzled about what I was witnessing. Luckily it didn’t actually hit him but it was a wake up call to remind us we’re not in North America anymore where everyone stops even if they see you a block away and think you might be crossing soon. 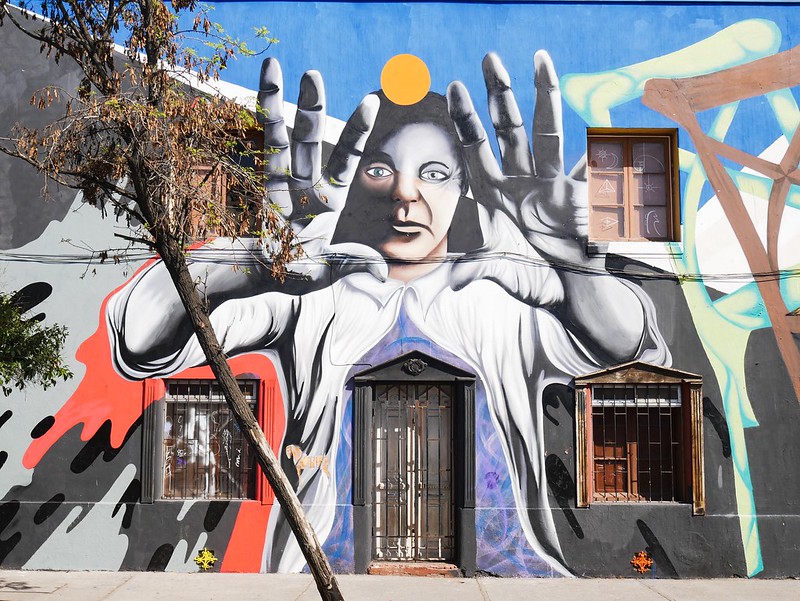 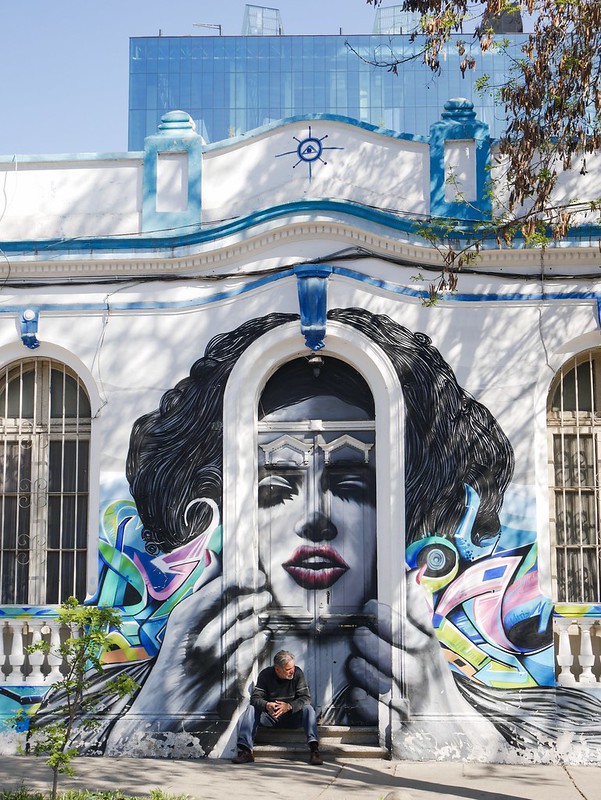 We sort of had a recipe of funny and annoying things happen to us in Santiago. Craig ordered chips with hotdogs (a South American classic) and as it was served he grabbed a clear bottle of liquid at the counter and started trying to translate the label. He thought it was vinegar and before he splashed it over his chips the chef and a customer launched forward to stop him. It wasn’t vinegar, it was liquid sweetener for hot drinks. Then he picked up the salt shaker and once again, just as he was turning it upside down the locals dramatically told him to stop. It wasn’t salt, it was sugar and the whole way home Craig whinged about how stupid it was leaving sugar and sweetener right on the counter. I laughed a lot. I had a hankering for pizza (as always) so we popped into a papa johns round the corner from our hostel and tried to order one of their offers. It wasn’t available and the worker told us in Spanish it was only available Monday and Fridays so we came back on a Monday and then he said it was only available before 5pm. The next day we returned, I was determined to get my pizza, so we opted for a mini pizza each and guess what, it was only available like one day of the goddam year, or so it seemed. I never did get my pizza.

It was Chile’s Independence Day while we were there so we headed to a ‘Fonda’ where they have loads of food stalls and they seem to be the place to celebrate. We went to one of the biggest ones at O’higgins park and it was full of locals celebrating. Chilean flags were everywhere and I actually read locals can be fined $300 if they don’t display a flag outside their property. Craft beer stalls lined the entrance and then we came across lots of signs advertising Terremoto which translates to earthquake. It’s basically a cocktail…I guess you could call it that, with cheap white wine, grenadine and the best bit – pineapple ice cream. I bloody loved it. We also tried another drink called Mote con Huesillo which translates to wheat with peach. It was a strange concoction that worked very well, but it was more of a desert than a drink and served with a spoon so you could scoop the soft wheat and peaches up along with some of the sweet syrupy liquid covering it. 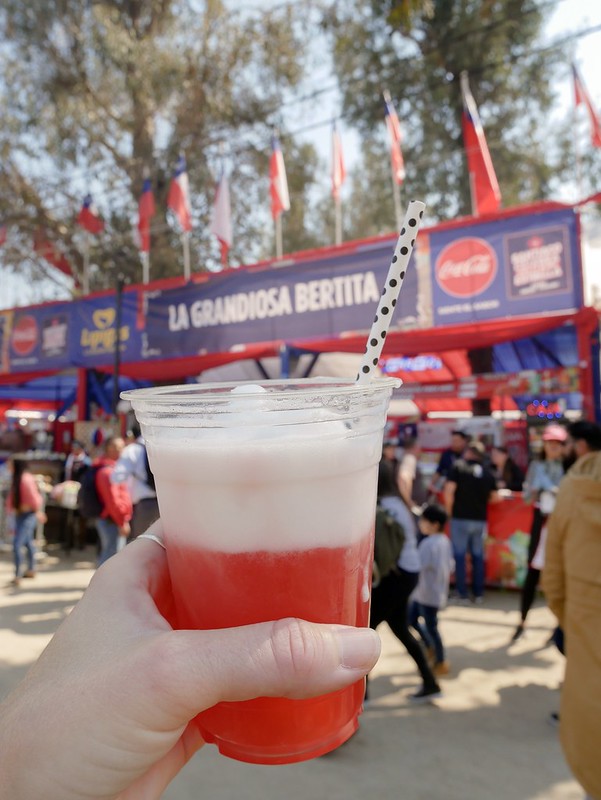 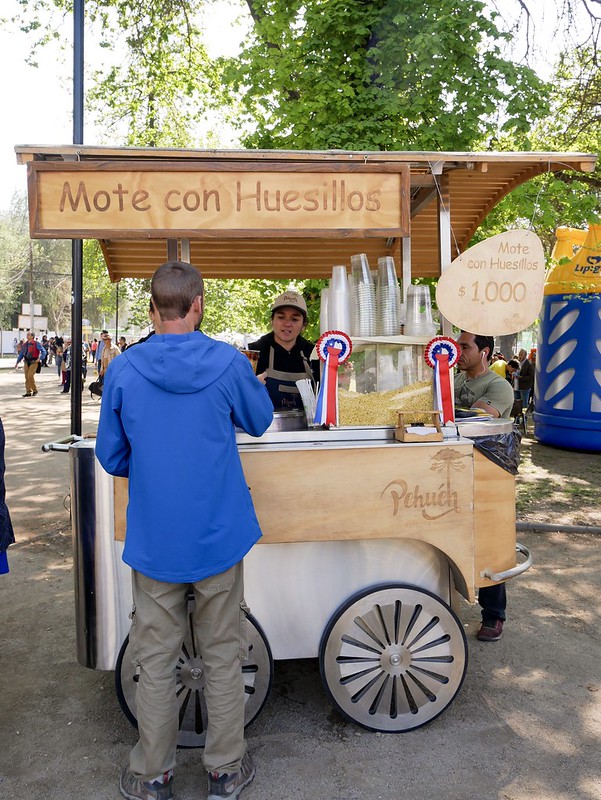 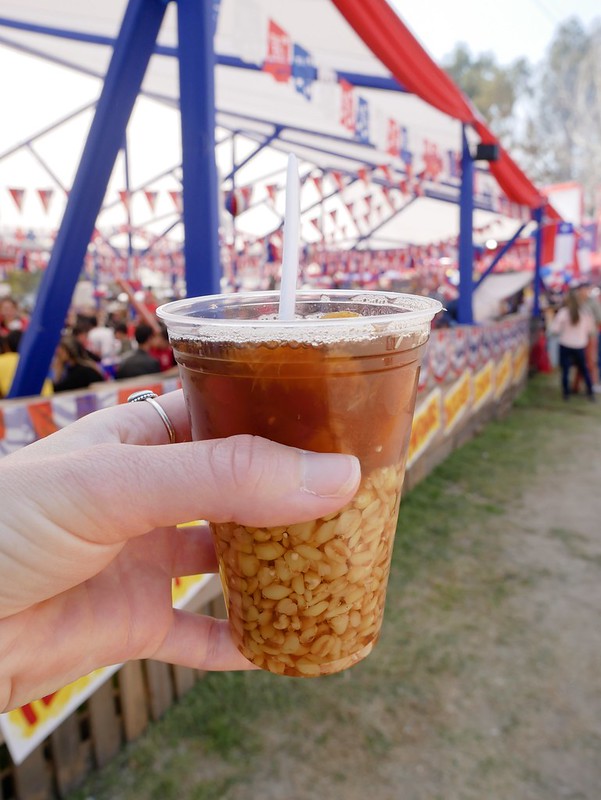 There was live entertainment which consisted of dancing lessons and live music where every song sounded remarkably similar to the previous one. Some locals had dressed up for the event with men in cowboy boots and ponchos and little girls in big puffy dresses. Everyone had a hanky with them as it seemed to be the vital ingredient to be able to dance Chilean style. They did some fancy footwork with their partner while swinging their hanky in the air. I wouldn’t say the event was worth the $7 entrance fee but it was a nice thing to do while we awaited our flight. 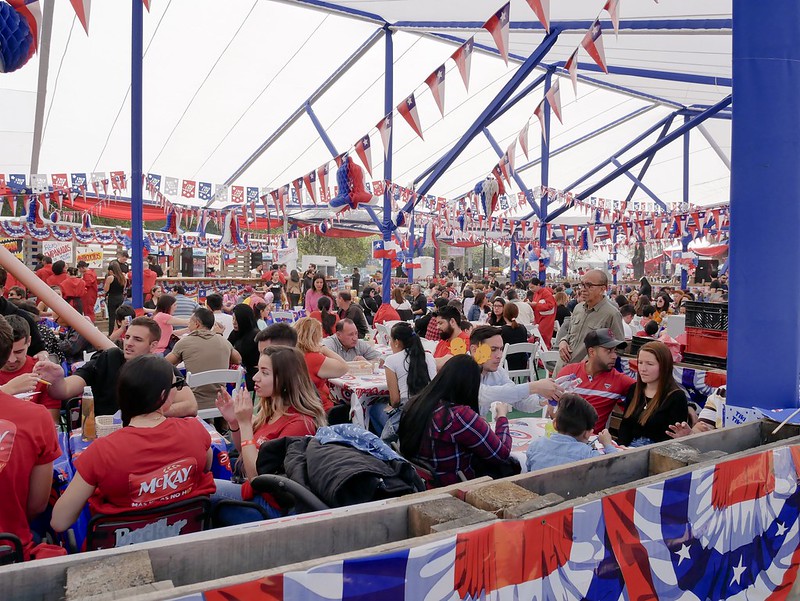 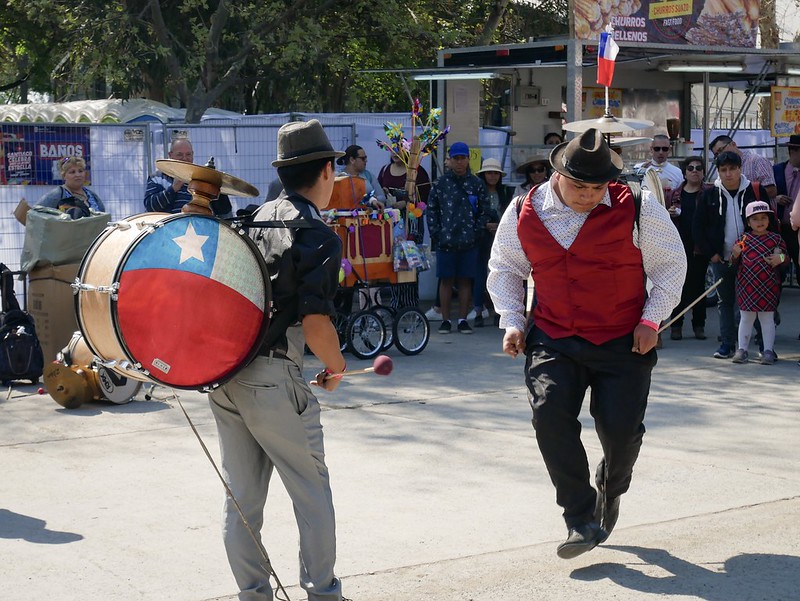 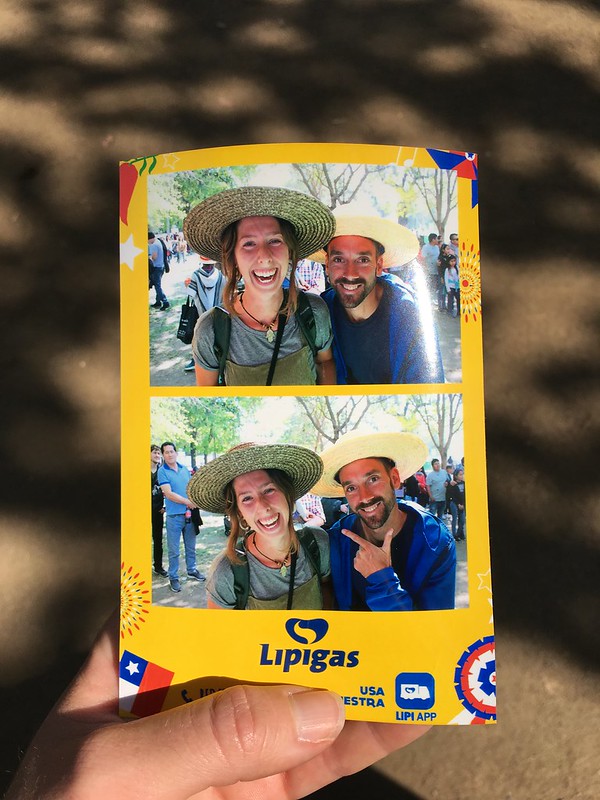 We also did a day trip to Valparaíso which is a bustling port city that’s become a popular tourist destination thanks to its hilly lanes filled with graffiti art. I didn’t think I’d like the place but it was so much nicer than I expected. We grabbed some empanadas on the go and headed on our own self guided tour of the artwork which I managed to find on this handy blog. As soon as we headed up the first hill we seemed to leave all the people behind. There were lots of different nooks to explore, sometimes we’d walk down nondescript steps and look back to see they were all painted with murals. Some of the art work was stories being painted, sort of like a comic book so it was really interesting to stop and look at what was going on. 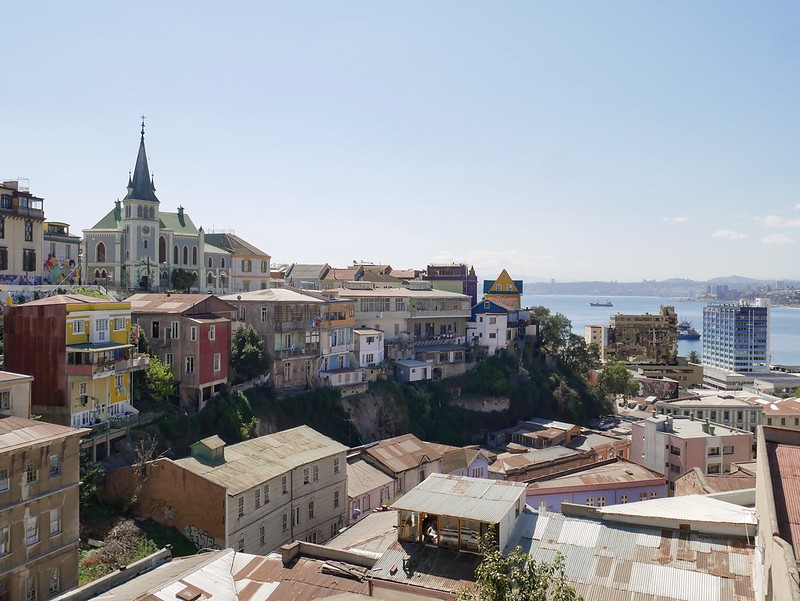 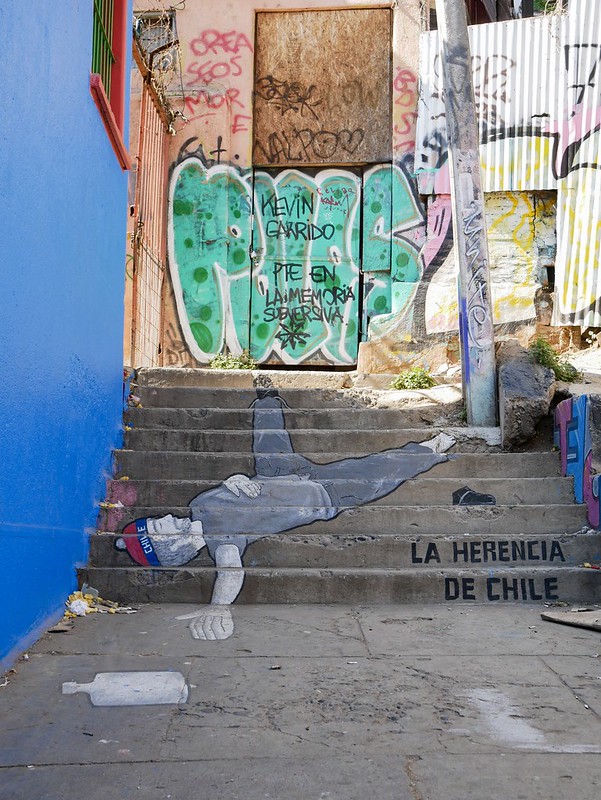 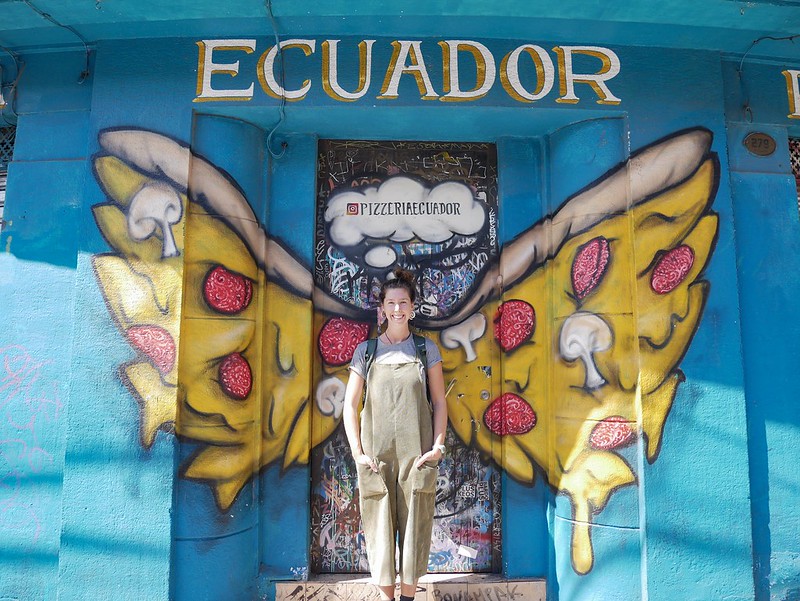 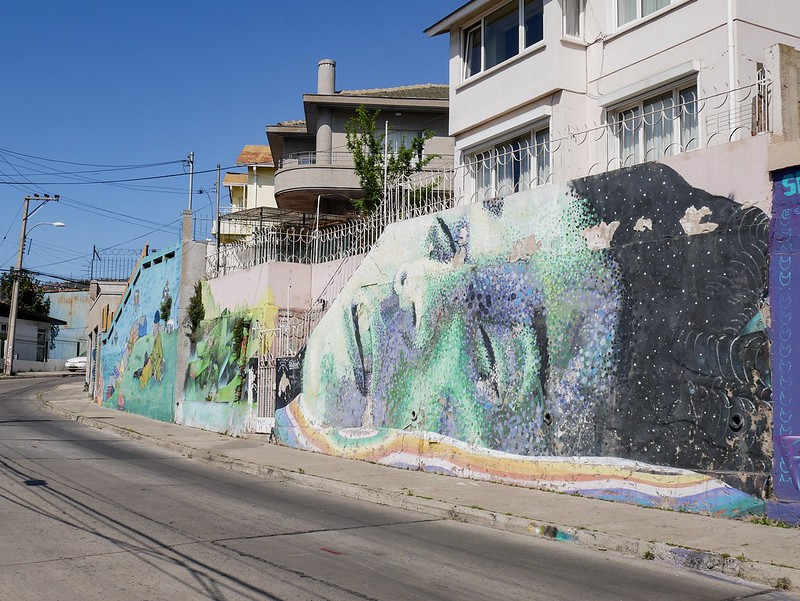 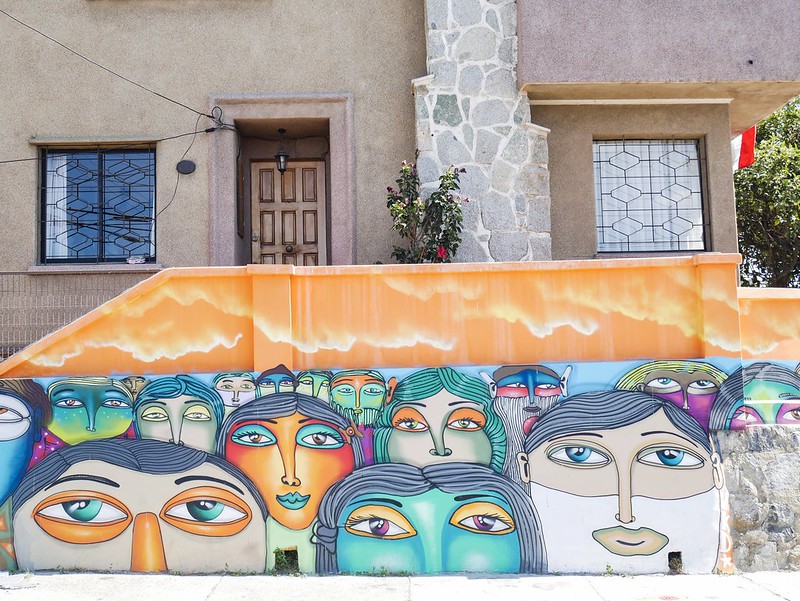 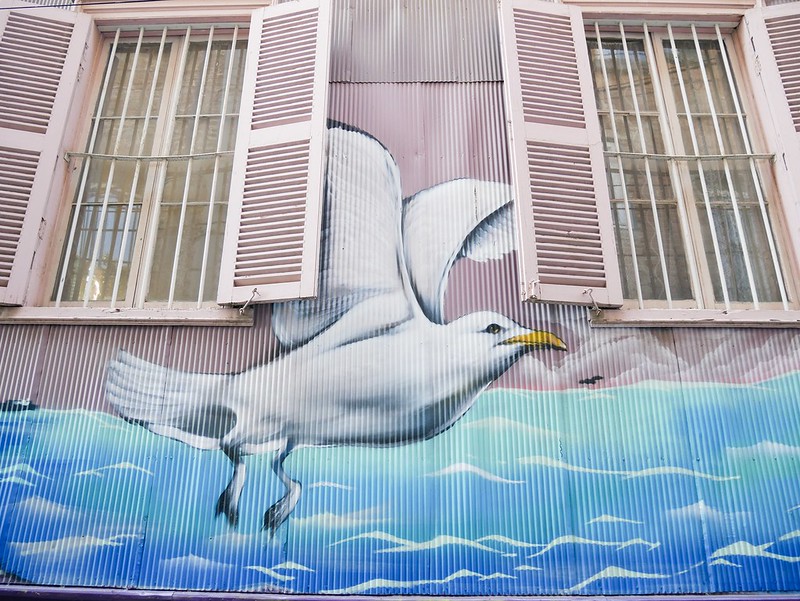 Street dogs roamed around the area but they seemed to be loved by the locals and some of the dogs had kennels made for them and food left out. We spent a couple of hours wandering around and we ended up in the main tourist section with cute eateries and hostels. I was busting for a wee though so we popped into a strange mall that had a spiralled ramp leading up about 6 stories with dozens of barber shops. We wound our way to the bottom floor to use the toilet and I saw a sign saying 300 pesos. That’s like 40cents for a wee!!! It’s cheaper in London! Hell no, I’m not paying that, I’m getting a bladder infection! I waited until we got back to the bus station and the good news is it was a little cheaper, Craig jokingly said “well done Lauren, you’ve saved us 5 cents!” 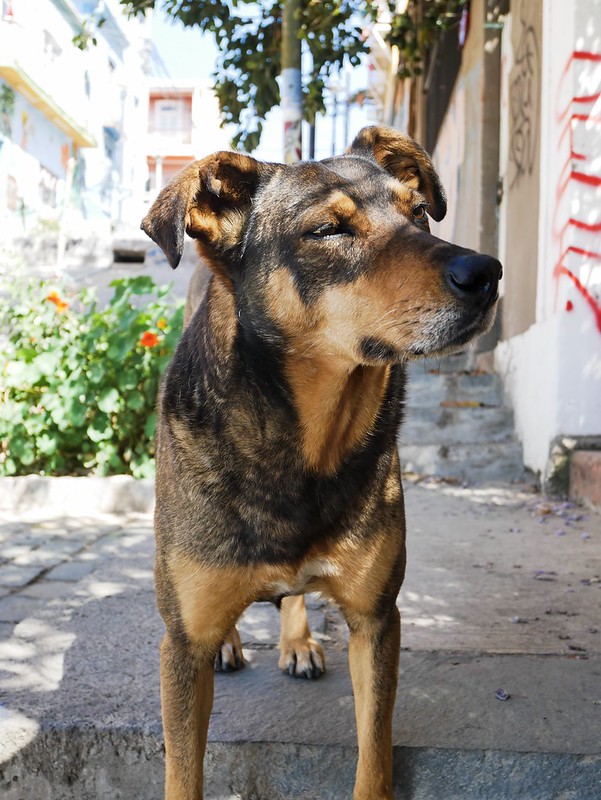 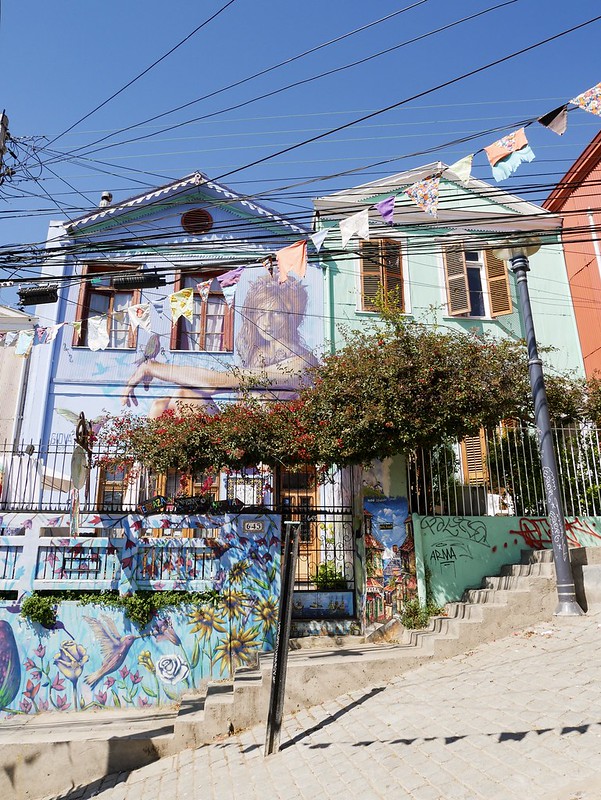 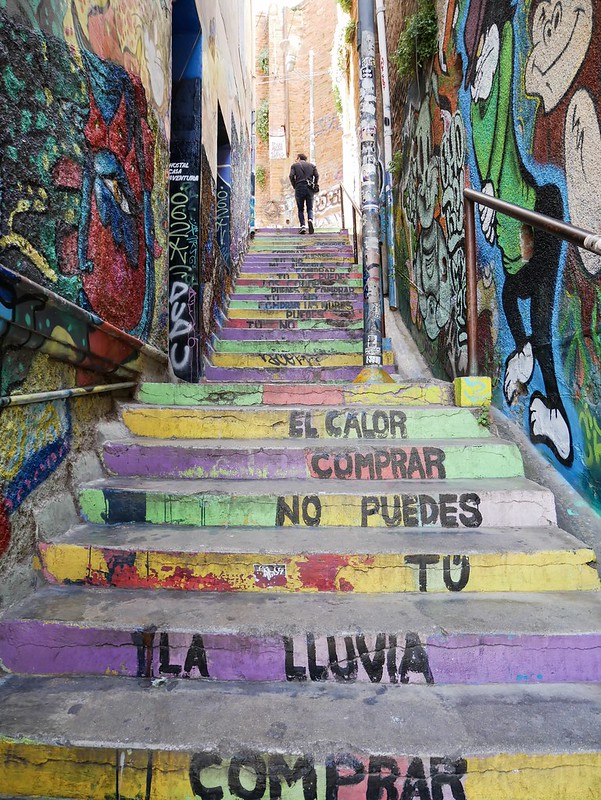 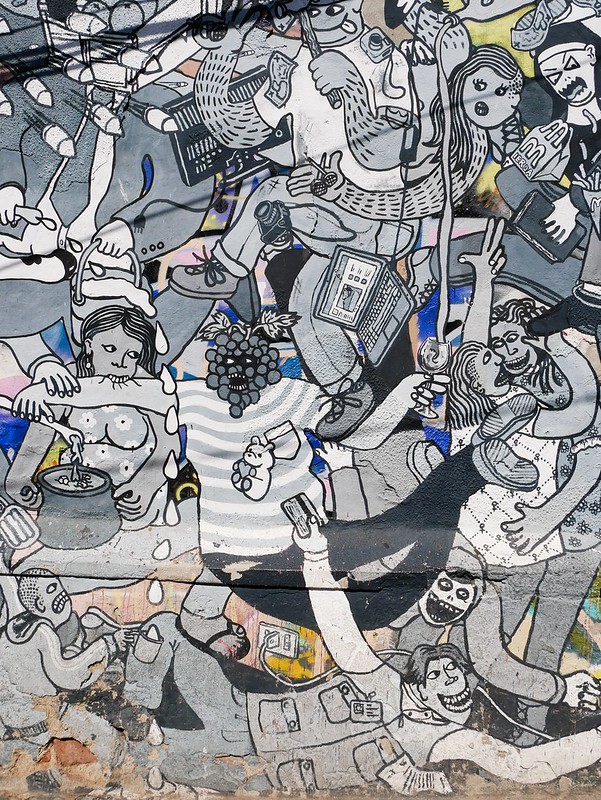 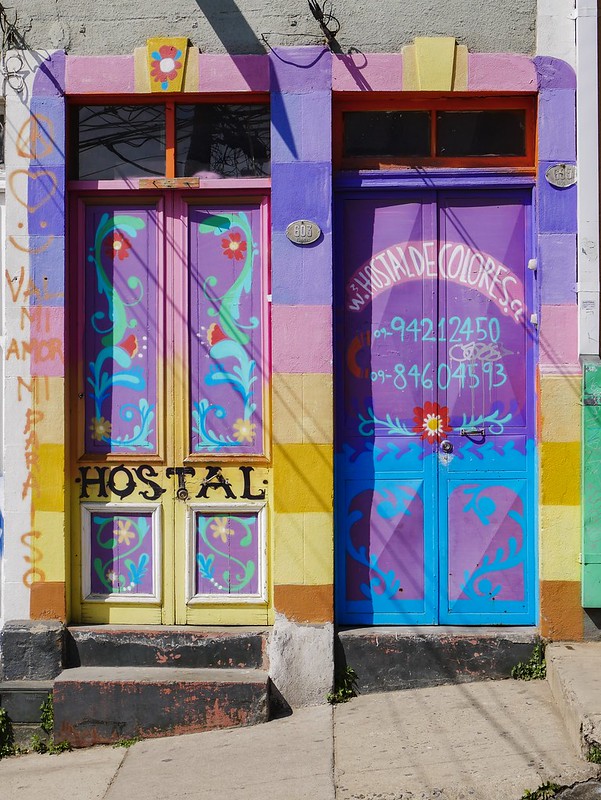 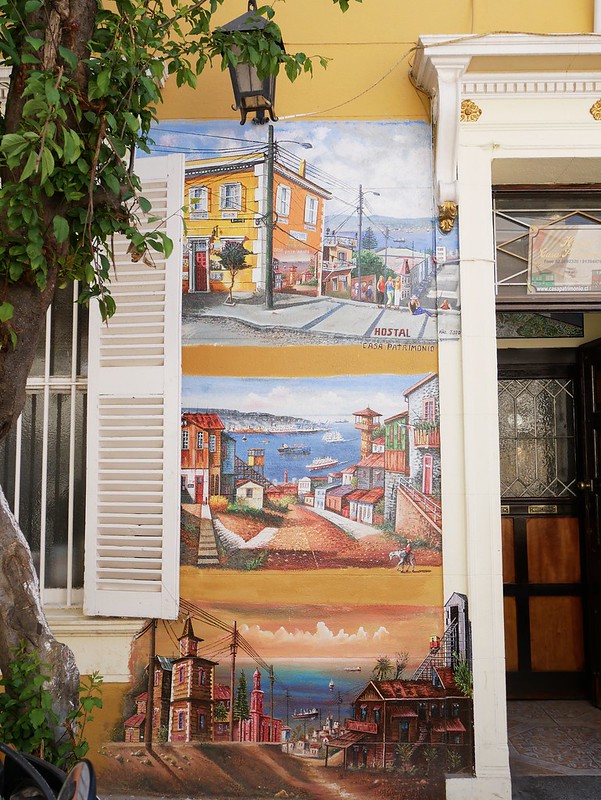 It was finally time for us to say goodbye to Santiago and catch a plane south. We couldn’t wait! 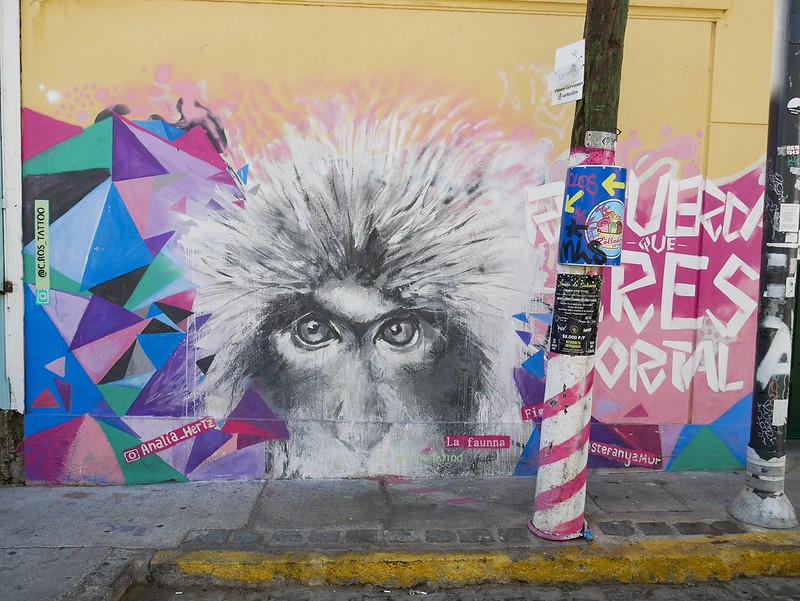 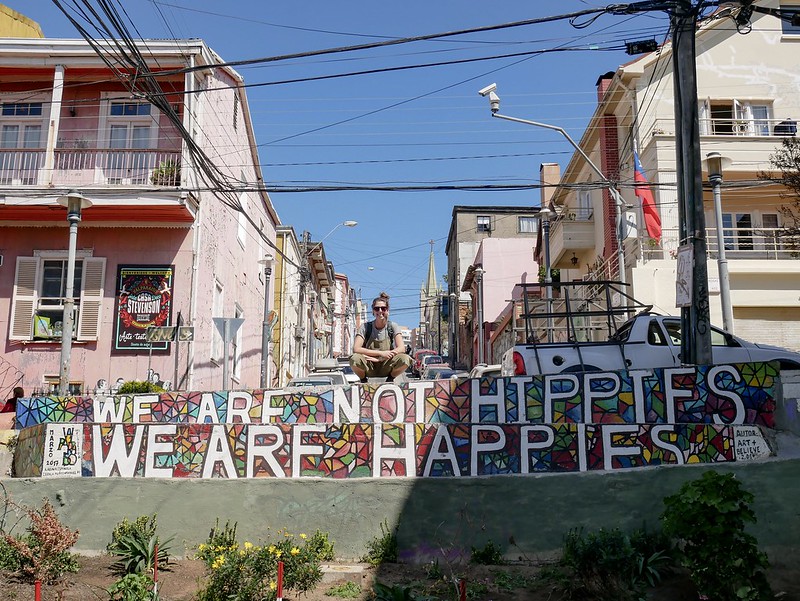