We peered through our wing-mirrors hoping to see one last grizzly bear before leaving the Bella Coola Valley, but as our van rumbled onto gravel we had to focus on the road ahead. It was the start of a 60km stretch of gravel that climbs from the bottom of the valley up to Heckman Pass at 1524m. Locals refer to the route as the freedom road as it gave the residents of Bella Coola access to the mainland. In fact the government refused to build a road because the route was deemed too dangerous so the locals got together, hired a bulldozer on either side of the pass and in 1954 the road was completed. We were dreading it. I’d read some seriously scary reviews about the road, it climbs the pass in the first 20 or so kilometres and is incredibly steep and windy with sheer drops and no guard rails. Luckily we were pretty much the only people driving the road so we could go at a nice pace. The drop offs are more prominent when you are coming down the hill so it wasn’t scary but we did have to be careful not to skid around the sharp bends on the loose gravel. Because Ruby’s such a trooper of a van we reached the pass without even breaking out a sweat, in fact we were shocked at how easy the 18% grades were. 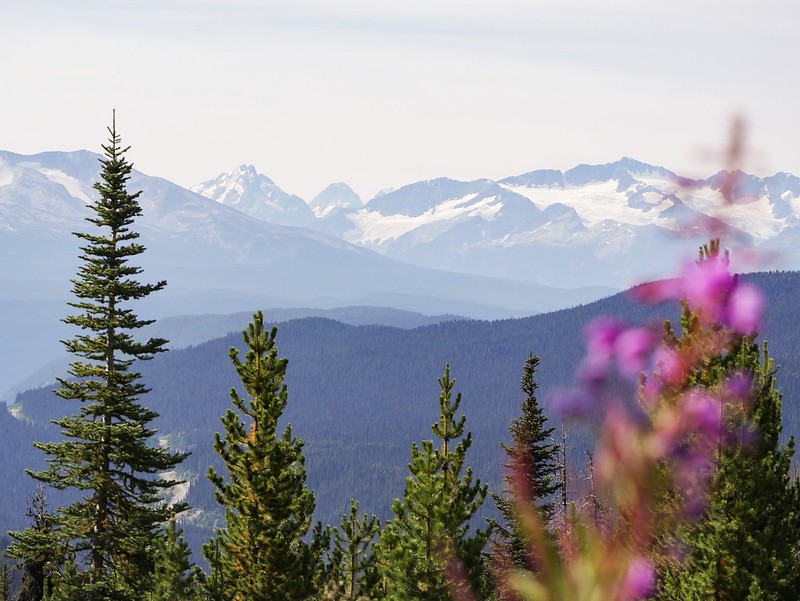 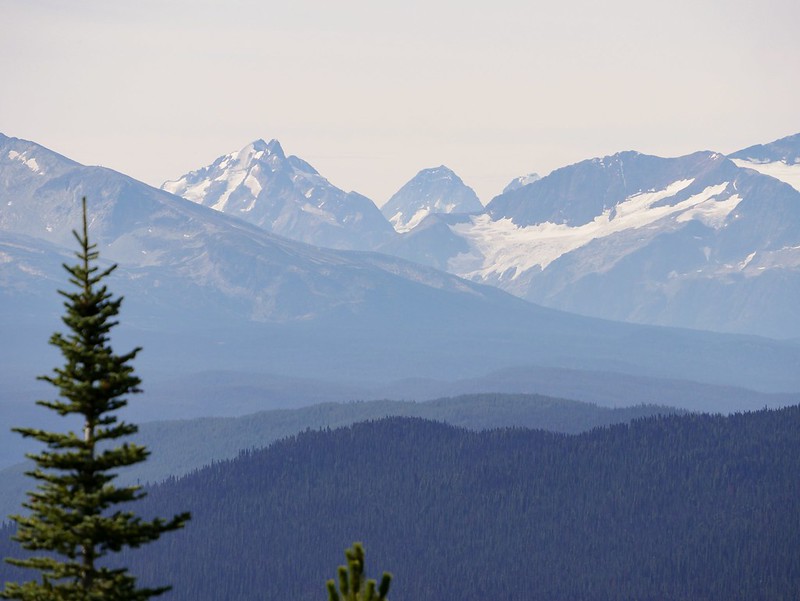 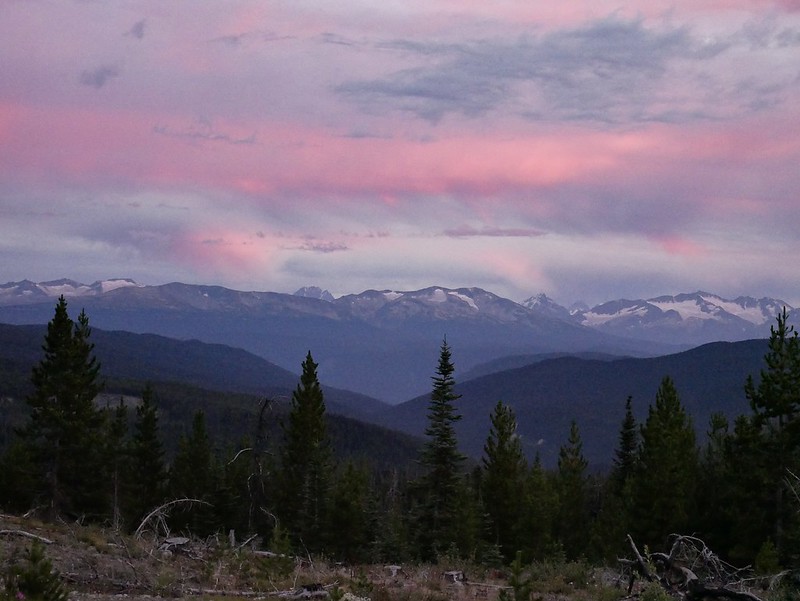 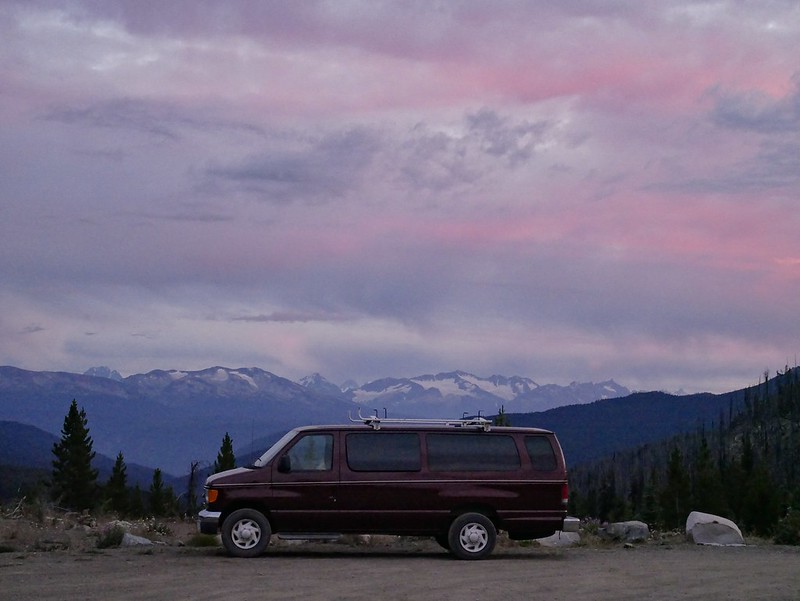 From the pass we had amazing views of the pointy coastal mountains caked in chunky glaciers. We opted for a hike to the rainbow range nearby the pass. It was a nice quiet trail which led through a vast area of burnt forest where new growth bushes had a beautiful tinge of red to them. The sun was shining down on us as we passed numerous lakes and distant mountain views, but as soon as we got to an overlook across the rainbow mountains the sun vanished. It was a shame as the mountains have a volcanic origin and are striped like spices in an Indian market but without the sun they didn’t pop. We could see they were nice terracotta and ochre markings but they were quite far away and the lack of sun didn’t help. After the hike we had a well needed solar shower and hit the road along the Chilcotin Plateau. The scenery completely changed from the lush rain forest and gushing rivers of the Bella Coola valley, now we were surrounded by a repetitive view of forest and lakes. 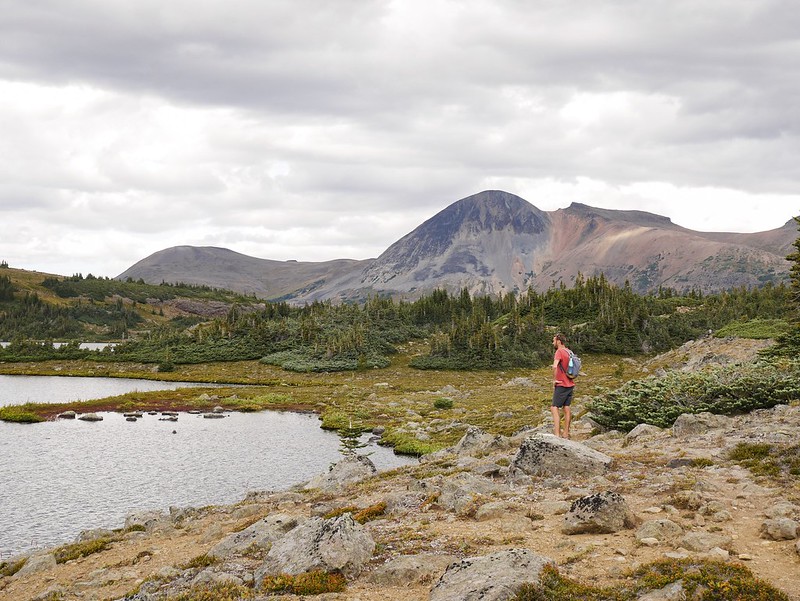 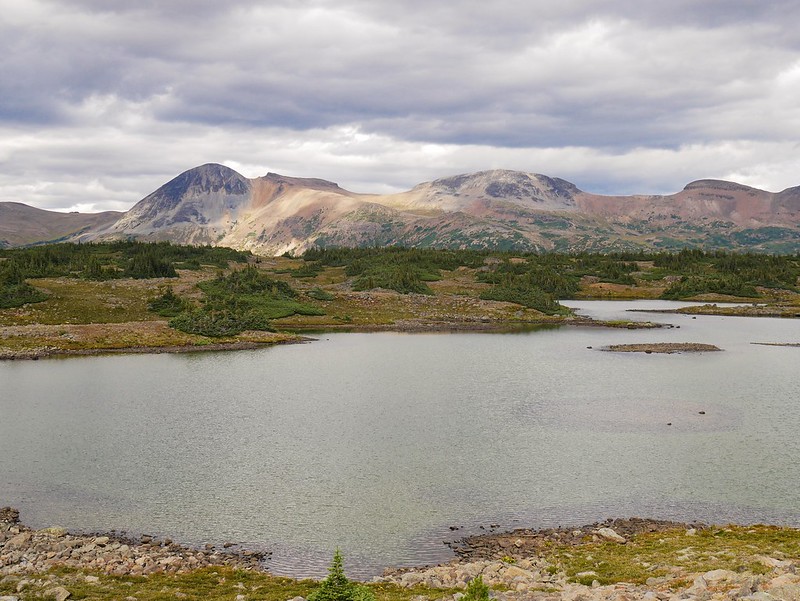 A few tiny villages dotted the route and we stopped to get some petrol in one, only to be met with a sign saying ‘no gas’. We didn’t have any back up at this point but thankfully the village had another gas station with a resident drunk man outside (at 10am). We camped beside a clear green lake which looked appealing for a swim but when we stepped in the silty ground glued our feet in place and the water instantly turned murky. Tiny shrimps seemed to be enjoying the water though. It was a lonely road driving 450km from Bella Coola back to the next major town, Fort William. We didn’t see anymore grizzlies, just two very nervous black bears and plenty of cows that belonged to the ranches.

Fort William wasn’t just a place for us to restock on food and gas, it was a place where we needed to get online and put Ruby the van up for sale. With the ad in place we continued our drive south, alongside the raging Fraser River which had a big landslide this year, causing havoc for the spawning salmon. Authorities even ended up transporting the salmon by helicopter around the landslide so they could reach their spawning grounds. 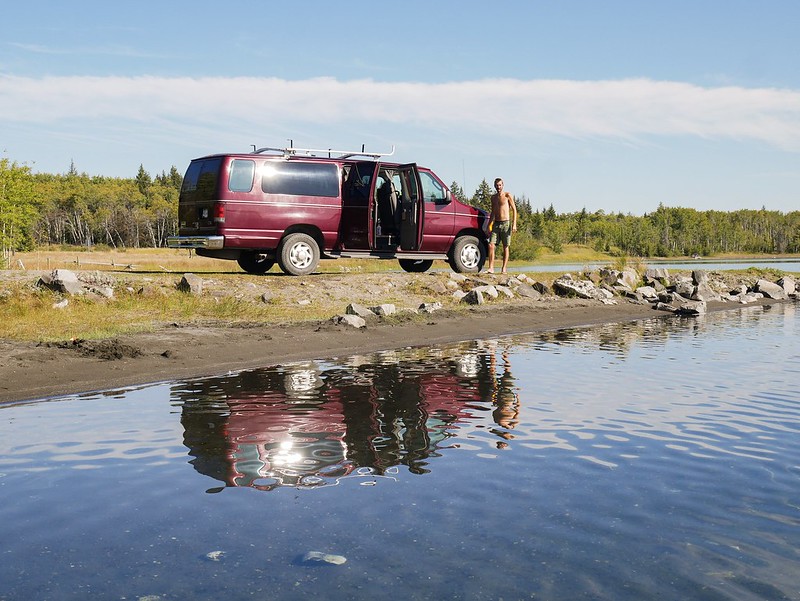 The route wasn’t thrilling but we did end up at a very unexpected gem of a lake at a scummy rest area, of all places. I couldn’t believe how beautiful the water was – it looked tropical. In fact it was one of my favourite lakes of our entire trip because it was an ideal swimming temperature with clean gravel beneath my feet and water so clear it was like a fresh water spring. We went swimming on three separate occasions, the light changing every time but it always looked very inviting. 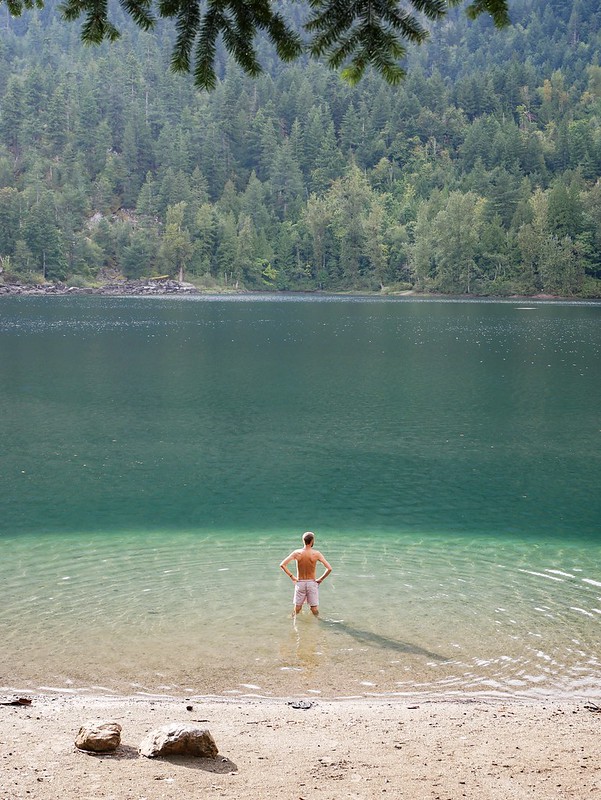 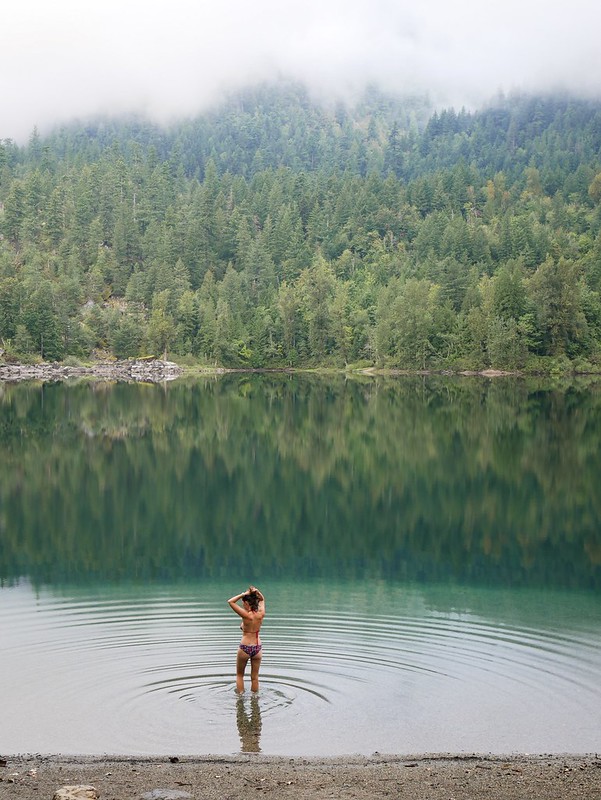 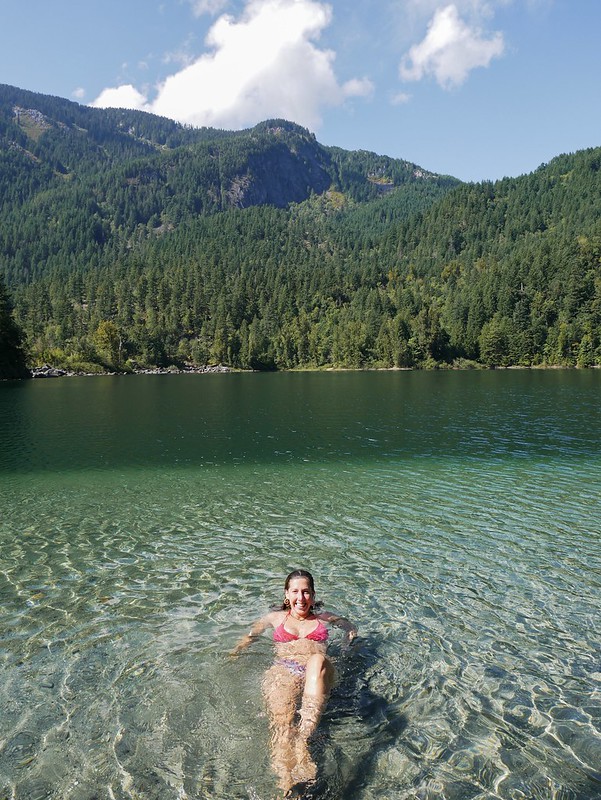 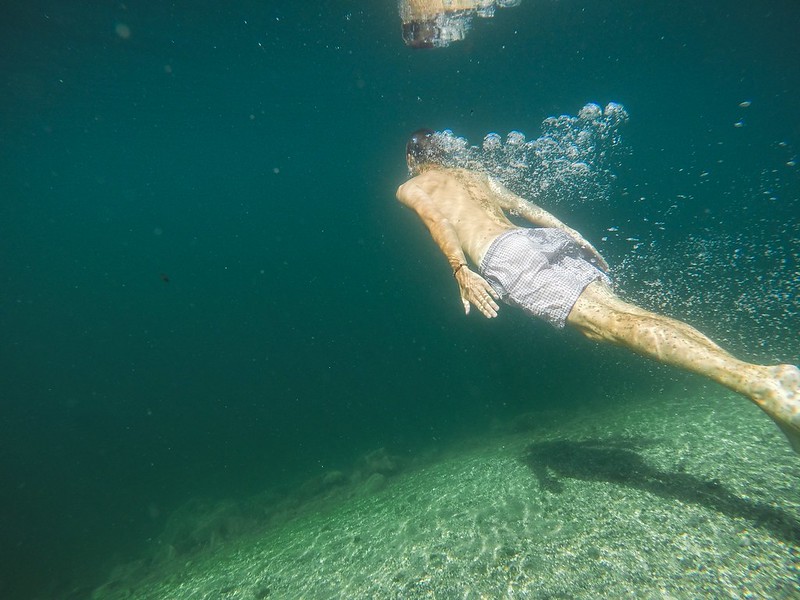 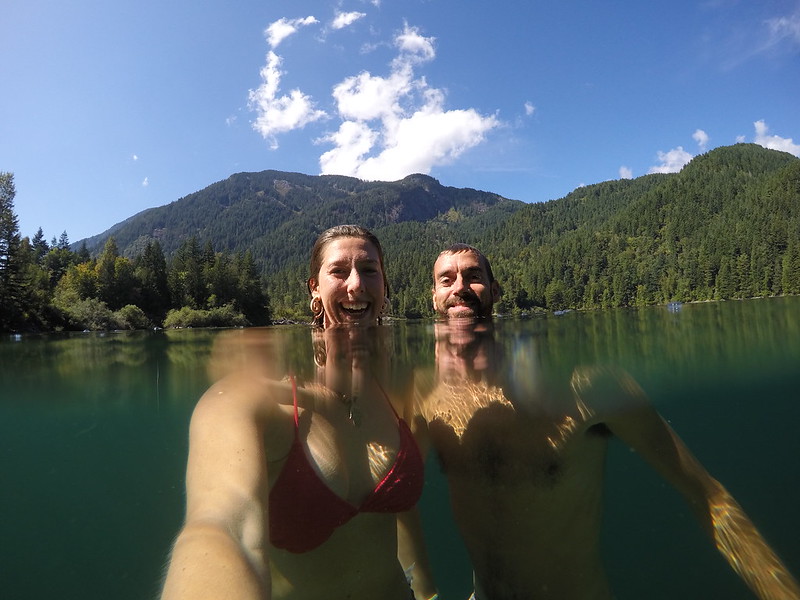 We were dreading the final drive into Vancouver. We hate cities. The last time we were in Vancouver we were stuck in traffic on the highway for about three hours. Eventually we bit the bullet and based ourselves in the Richmond area where we knew of a place we could sleep for free. It was a strange area though, like an unofficial china town and all of the signs in the supermarket were in English and Chinese. They also unnecessarily wrapped every single vegetable or fruit in a polystyrene box and slathered it in clingfilm, something we hadn’t seen in the rest of Canada. Anyway, in the day time we based ourself at Ikea as it had good wifi, cheap food, refillable drinks, toilets and free showers in a community center just a couple of blocks away. It was quite funny how a particular sofa area in the restaurant became an extension of our van-home. We’d sit there for hours, charging our phones and buying hot dogs, veg dogs, meatballs and Icecream throughout the day.

After a week of being up for sale ruby found her new owners. They were a lovely English couple with a two year working holiday visa and the plan to do a roadtrip before settling down in Vancouver. We couldn’t of sold her to a nicer couple! With our backpacks packed, documents signed and money handed over we bid our farewells, especially to Ruby our most trustworthy and homely van we’ve owned. Our backpacks were practically exploding at the seams and the weight was a foreign concept after not carrying them for so long. Then we had to wait for a bus and a skytrain, accidentally going in the wrong direction before finally arriving at Vancouver International Airport. We didn’t have a flight booked, we just knew we wanted to visit Patagonia with the option of Colombia or Mexico first. The ticket prices were all much of the same so we ended up going the furthest distance, straight down to Santiago on a 21 hour flight with two changes in the USA. We slept on a bench in the airport until 4am and then it was time for our next adventure. 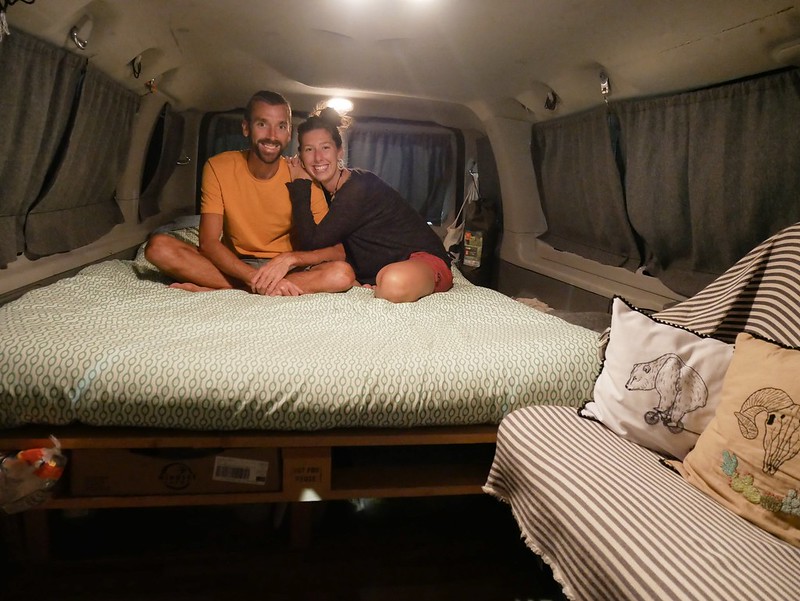 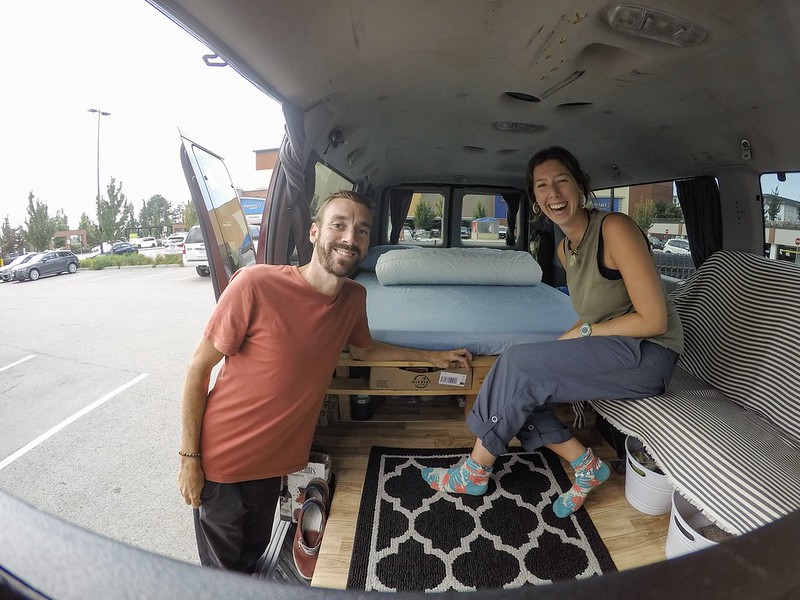 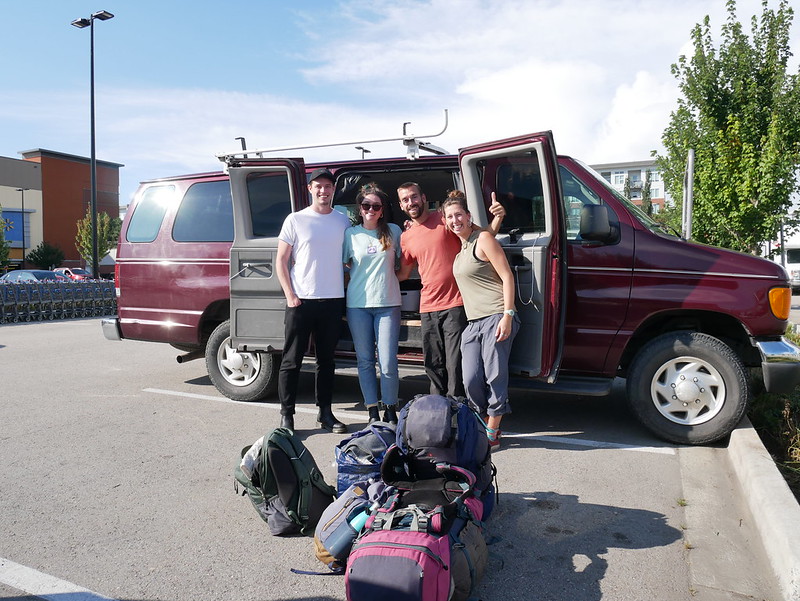