Our alarm went off at 5:45am and with sleepy eyes we reluctantly got up, pulled the curtains back and hit the road towards Moraine Lake. I knew it was a small carpark which is prone to filling up early in the morning but I wasn’t expecting the road to be closed at 6:18am due to a full carpark!! I was pissed off, how ridiculously popular has a place become that the parking fills up before the birds have even started singing their morning song. We’d visited the lake a few years back but this time we wanted to go boating. The park has an appalling shuttle service that goes from the village to the lakes but they charged for the goddam bus, it wasn’t even complimentary AND there was a queue of 50+ people waiting for it an hour before it even started running. We couldn’t take our boat on the shuttle either so if we were going to the lake we had to drive there. I kind of hated the area already, it’s become way too busy and that takes all the fun and natural beauty away from a place. But alas, we had no choice but to change our plans, park up at Lake Louise which had just a few parking spots left, and see if the road reopened in the afternoon. The morning light was lovely though and the water was perfectly reflecting the mountains. The lake was milky from the glacial sediment but the turquoise colour that it’s famous for becomes more visible as you gain altitude. 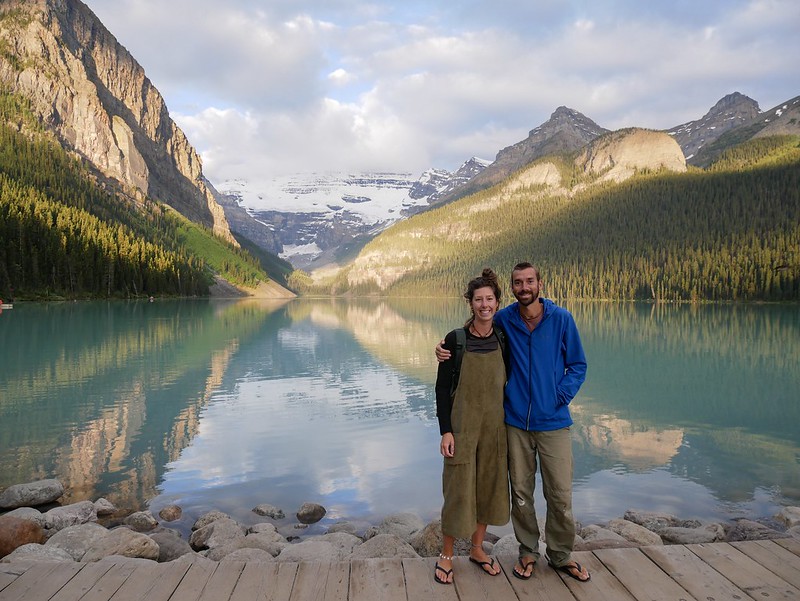 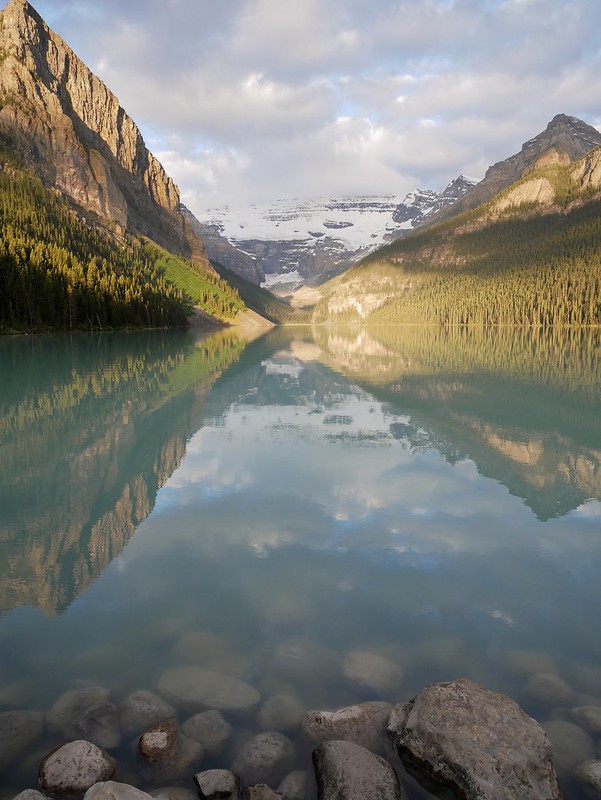 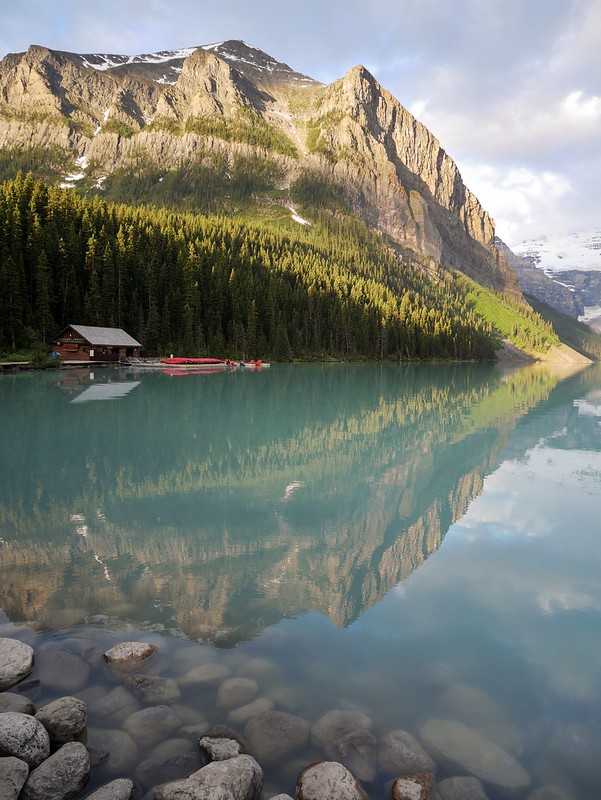 After breakfast we did a short stroll to Fairview Overlook, not for a view of the ghastly fairview hotel which is basically a high rise building that should never have been built in a national park, but for a higher view of the lake. There was some information about the history of the hotel and it had a funny photo of one of the original hotel buildings burning down to a pulp while holiday-goers picnicked by the lake as if nothing out of the ordinary was happening right behind them. 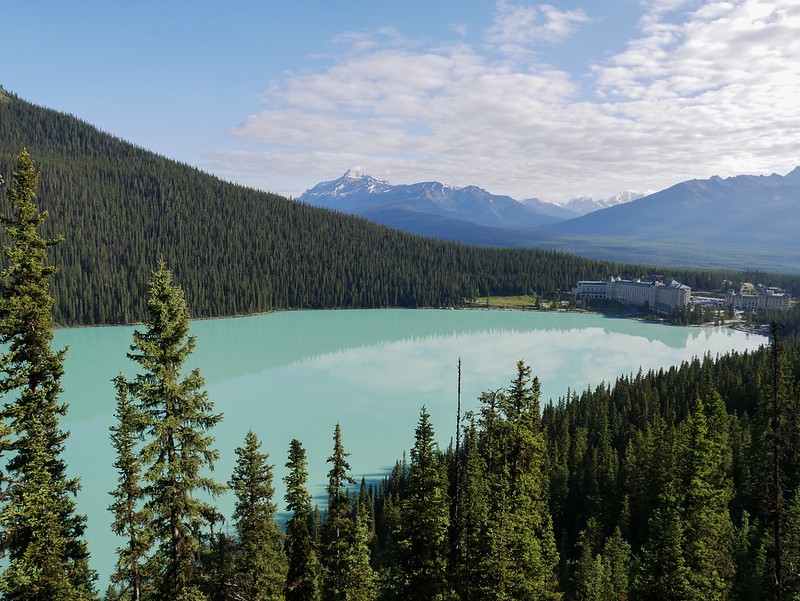 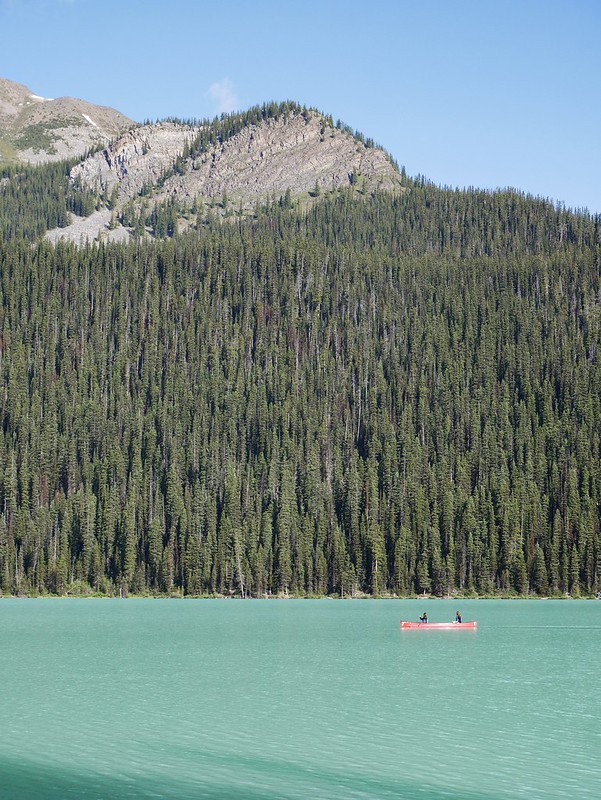 The main trail ended at the lookout but there was the option to continue on a loop that joined an unmaintained route. I remarked that it was weird of the park to not recommend the trail as it was in pretty good condition, but then I stepped on a slippery tree root and fell flat on my arse. We detoured along a rocky slope to get another vantage point and then we followed the shoreline back. 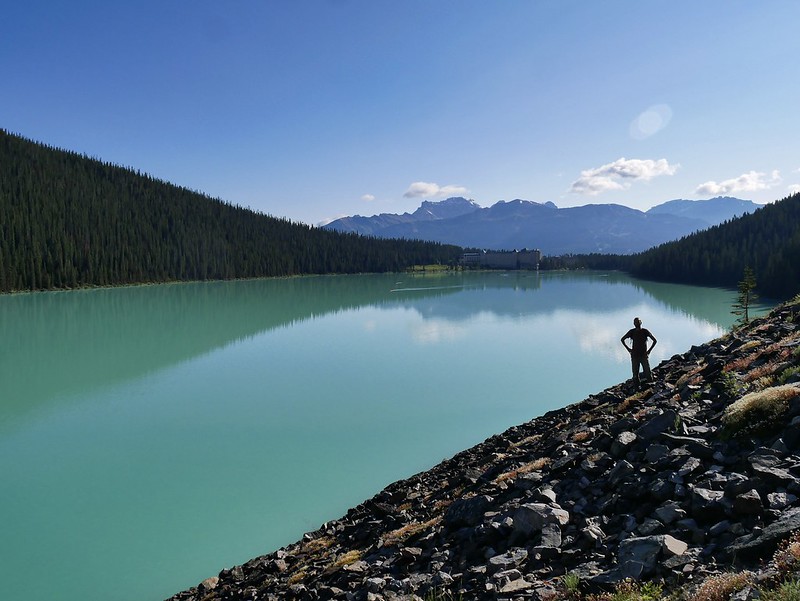 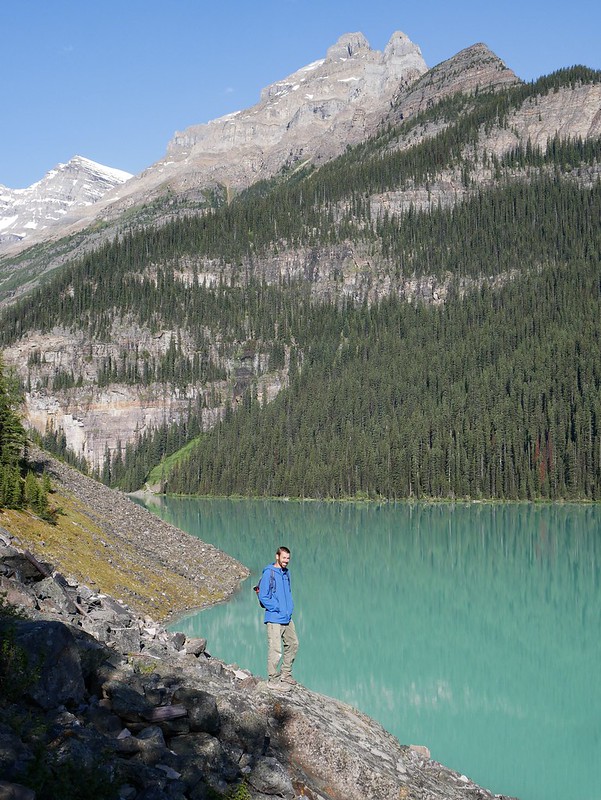 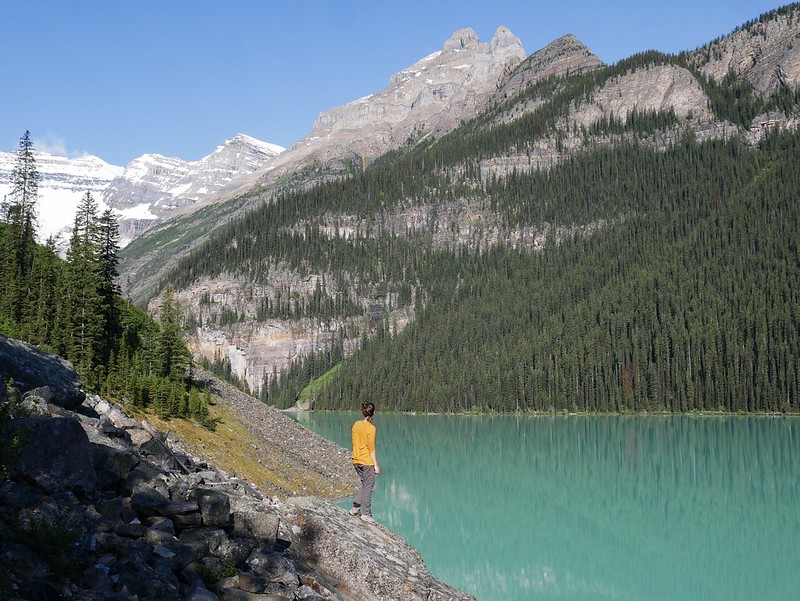 There were a dozen or so red canoes out in the water which the tourists were paying the astronomical rental fee of $115 for thirty minutes or $130 for one hour!! But we didn’t see any private boats out which was strange so we asked a staff member if it was ok and he said it fine and apparently hardly anyone has their own boat with them so that’s why they all rented canoes. We didn’t have a fancy dock to set off from so we had to carry our huge boat through the mass of people taking photos on a wooden decking area. I hopped onboard and Craig gave a big push and launched himself in. With every paddle the irritating squealing of the crowds began to fade and eventually we were in peace and drifting on the turquoise water. It was the perfect sized lake to explore and within an hour we’d paddled all the way to the end. The shingle ground was braided with streams that were fed by the mighty glaciers above. We pulled Roland onto it as I desperately needed a wee but it involved wading through the freezing cold river where the current pulled my feet with great force and then I walked through mosquito filled grass to reach a big rock that ended up not being as discreet as I’d hoped. We could see a long line of people walking the shoreline trail so we were pretty grateful to have the freedom of our boat. The weather really warmed up on our journey back and as we pulled up to the busy shoreline Craig took a plunge in the frigid water. 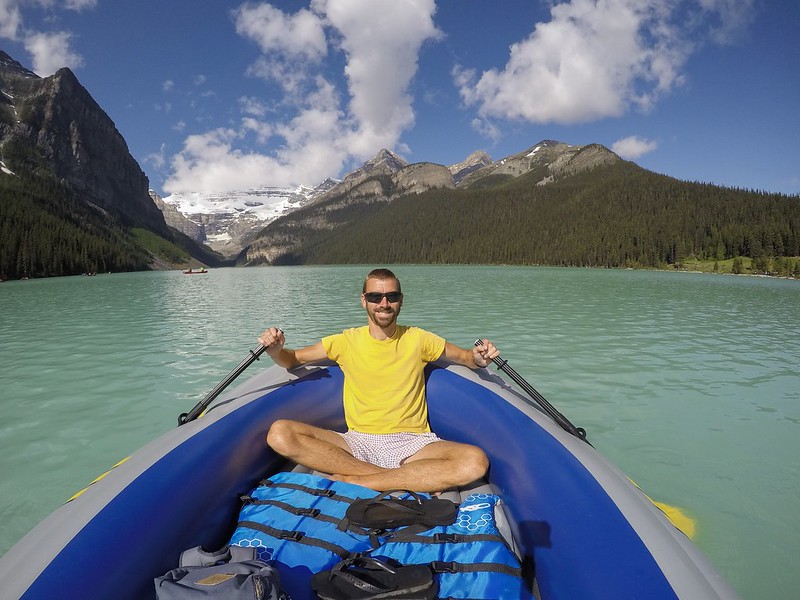 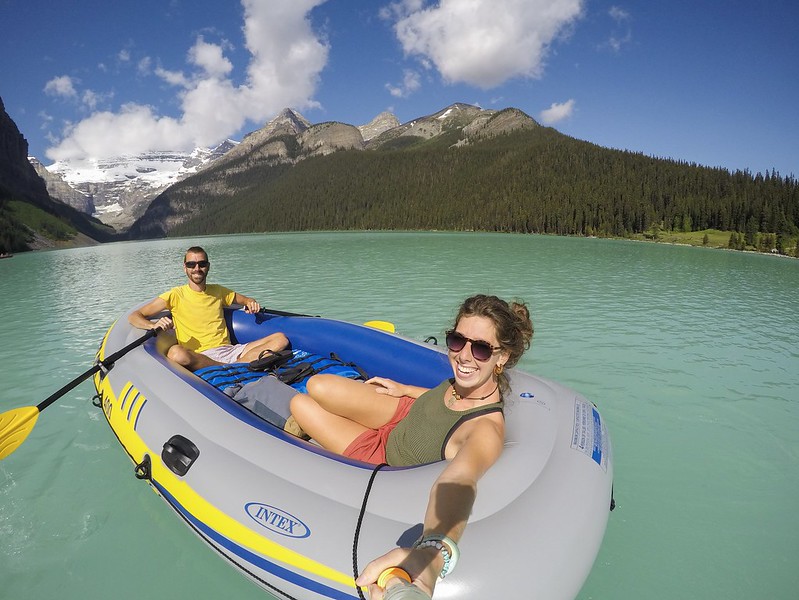 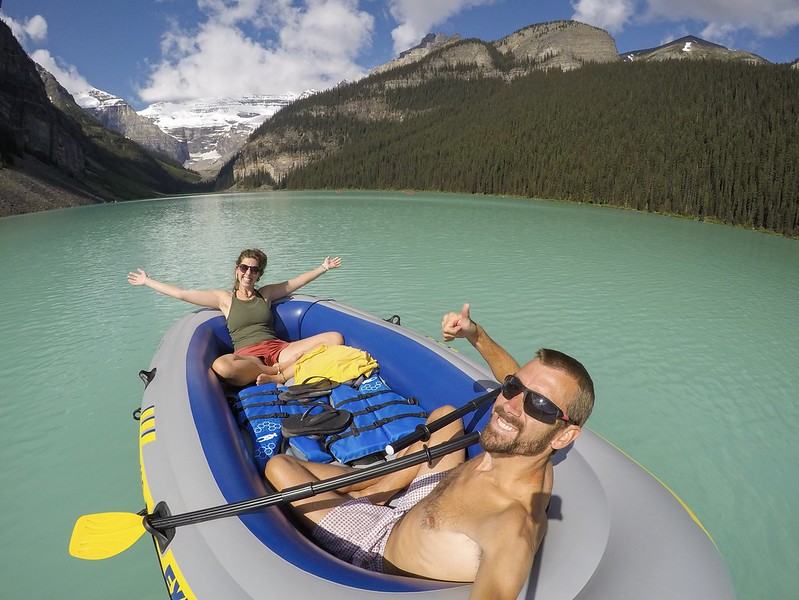 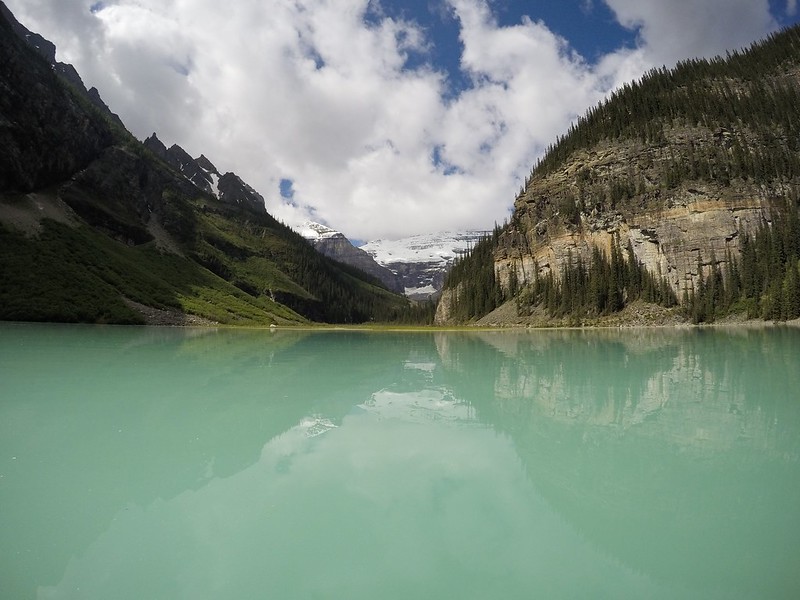 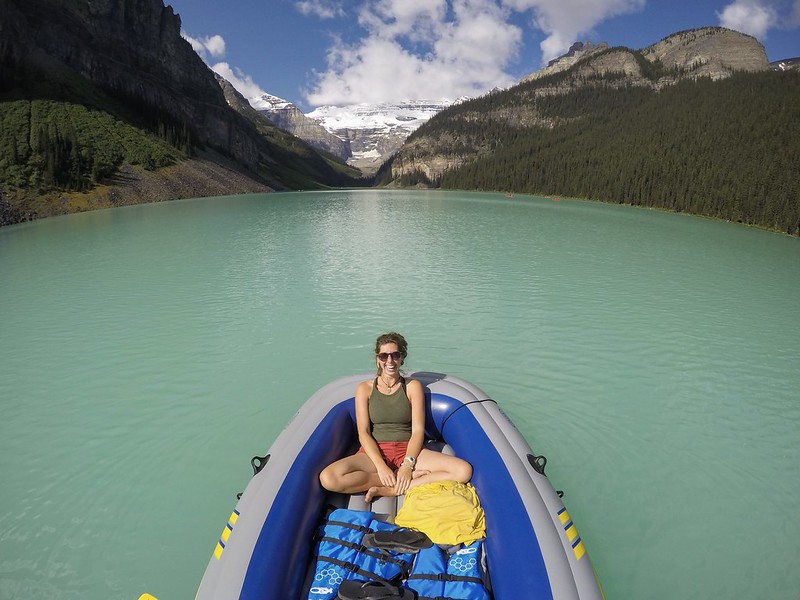 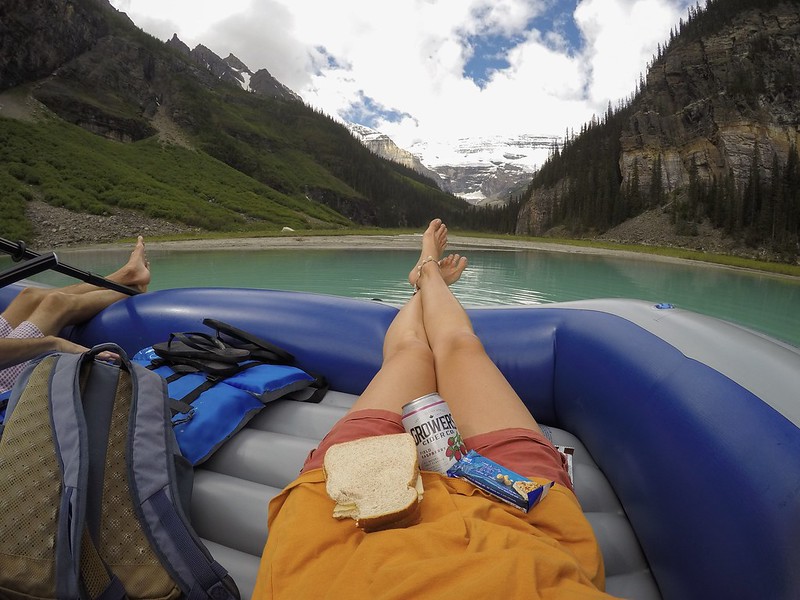 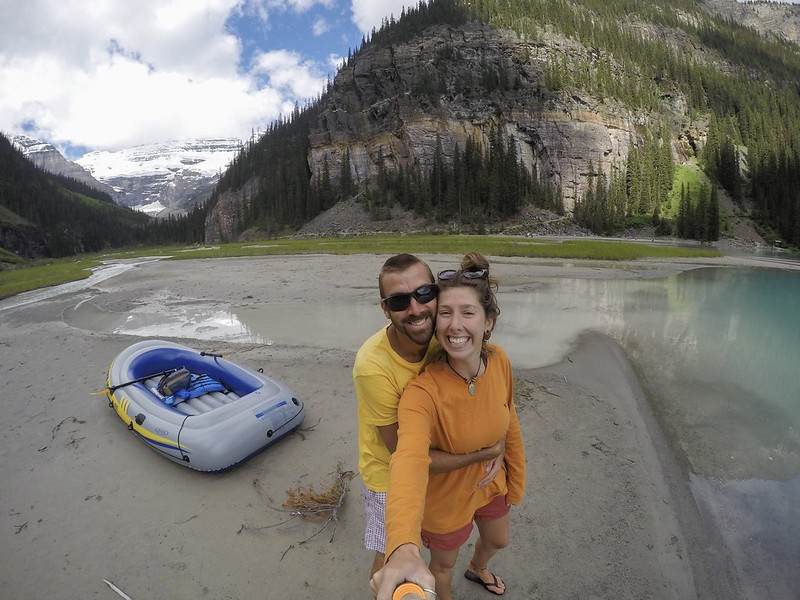 It was around 2pm and we still wanted to visit Moraine Lake so we washed and dried our boat and then partially deflated her so she would fit inside our van. Sadly the road was still closed so we asked the worker what the system was, when they usually open it back up etc and she said when five cars leave they let in five new ones. But they had this mad road system where you weren’t allowed to u-turn or park along the sides so it was complete pot luck if you came by when it was open. But Craig had a sneaky plan, he’d spotted a busy carpark nearby where we parked and waited, watching the cars exit until it reopened and then we floored it, cheering as we got through.

We parked up and were shocked at the amount of rubbish in the carpark. People had bought prepared salad boxes with plastic tubs of dressing and left it all on the floor…in a National park filled with bears. Then I went to the washroom (which was a pit-loo as usual) but there were just four toilets, in one of the most popular destinations of the park. Therefore they were totally abused with piss all over the seat and floor, it really seemed like the park was accepting way too many visitors and didn’t have the infrastructure to cope with it. We did a short walk to a rocky mound for the best view of the lake but it was rather cloudy and there were the usual inconsiderate people that leave the main trail to get a better photo, and in doing so they ruin everyone else’s photos by standing in the way. All we wanted was one photo but people took so long posing in the prime locations, including a man that sat like Princess Diana outside the Taj Mahal while his friend took a photo from every angle. As you can tell I was in a rather ‘I hate all humans’ mood. But – on the plus side we made it to the lake and we were going to escape the crowds once again on our beloved boat. The entry into the water was a little trickier than Louise but with a few polite ‘excuse me’s’ we made it through and set off. 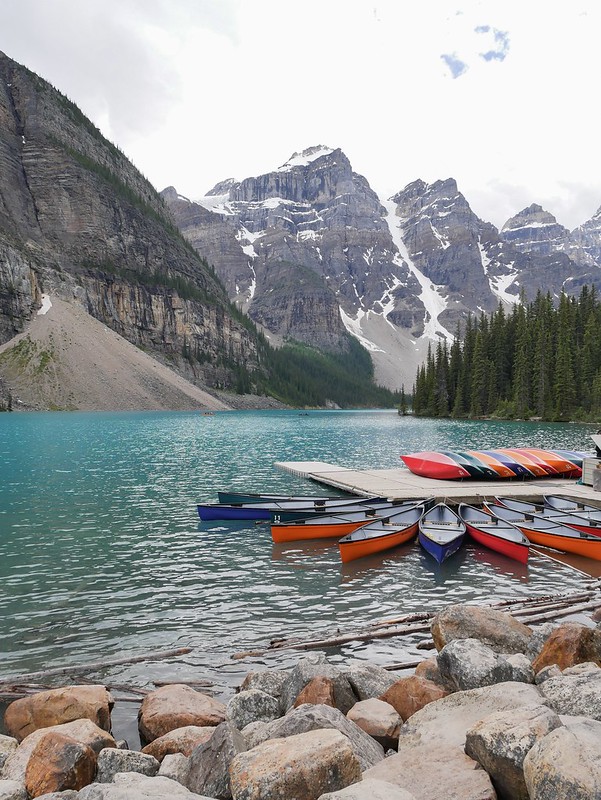 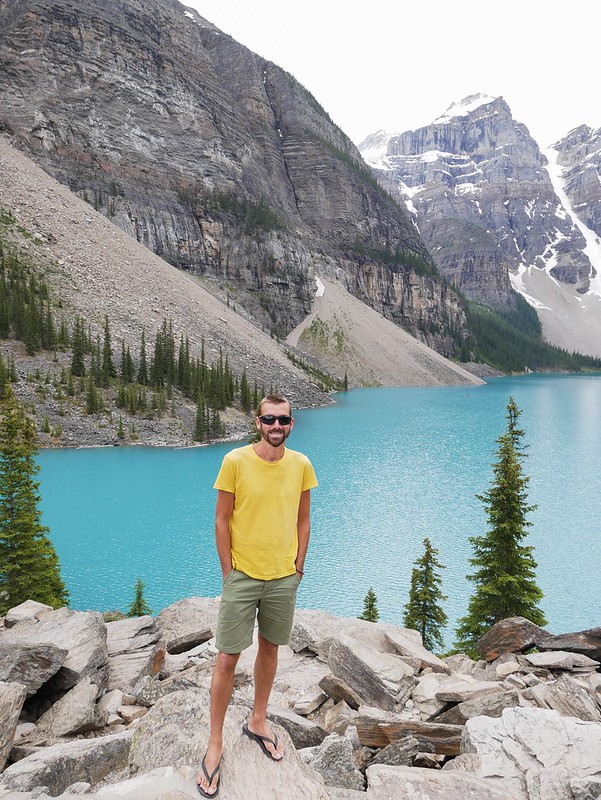 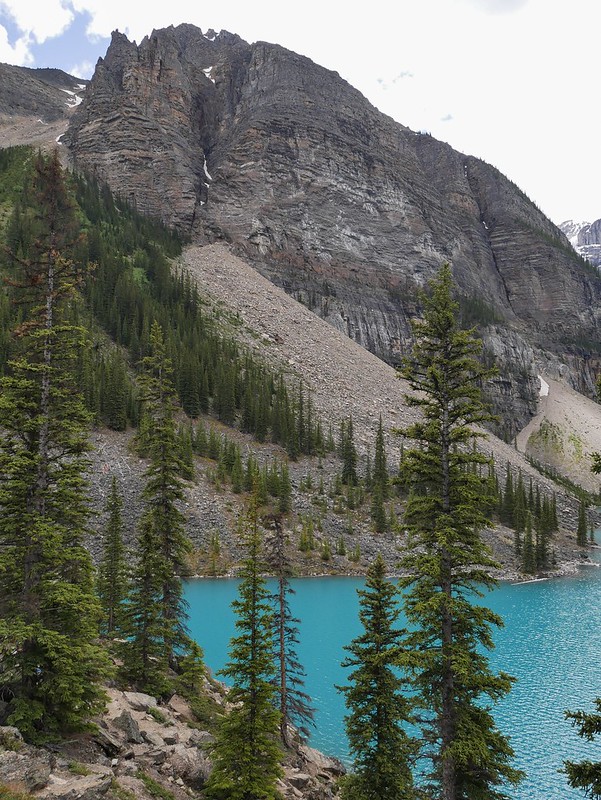 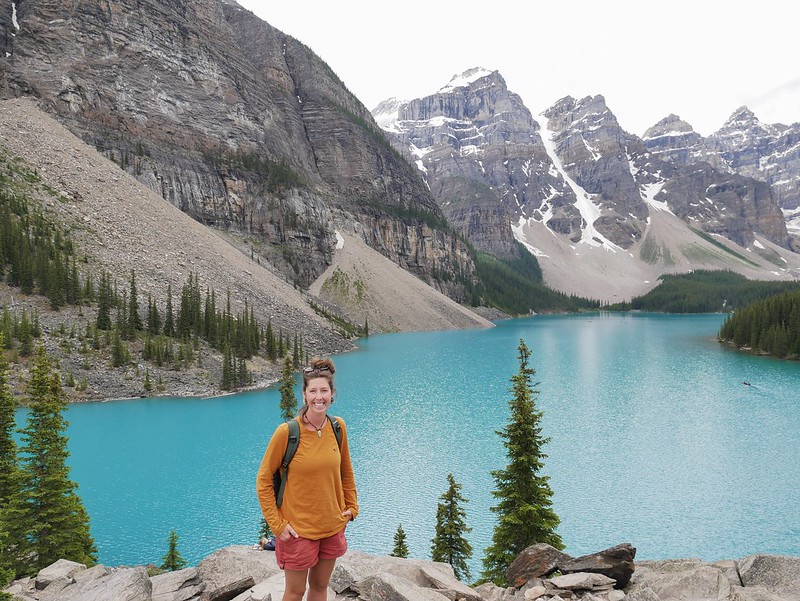 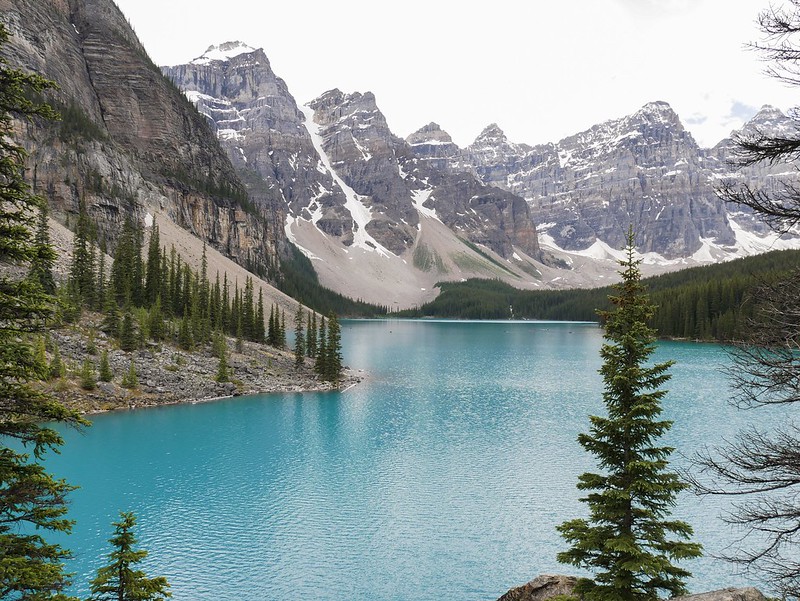 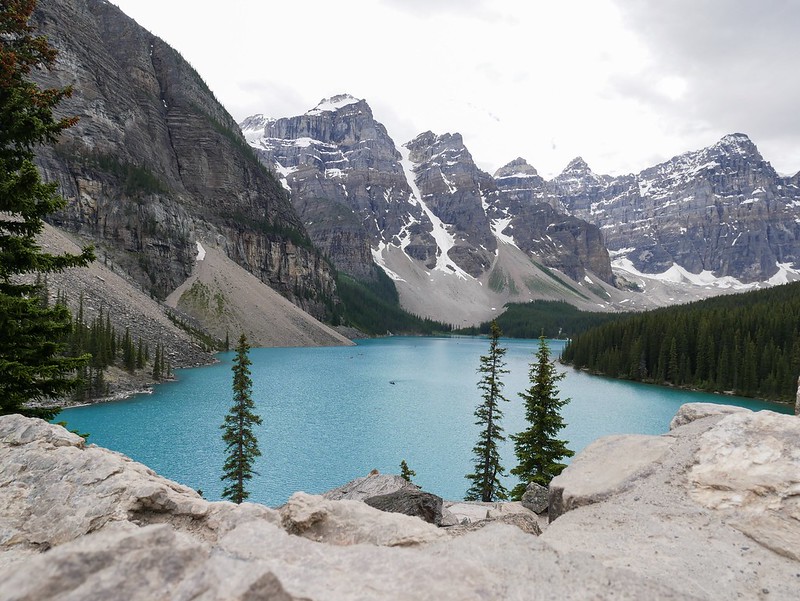 Lake Moraine is the crème de la crème of alpine lakes. Ten pointy peaks rise from the shoreline and that’s pretty damn spectacular in itself but there’s also chunky glaciers clinging onto the mountain tops which slowly drip down, filling the lake with the most mesmerising blue water. As we paddled we passed a few more rented canoes and said hello to a jolly Australian couple. They turned around to us and with the strongest Aussie accent said “where d’you get that boat from?”. They thought we’d also rented it from the shop and they actually seemed a bit jealous that they hadn’t chosen our style. Boy did it feel good having no time limit and knowing that our boat only cost $40 instead of $130 for a one hour canoe rental. We paddled around the circumference of the lake and then traversed back through the centre. There were couples taking their Instagram photos but one really took the cake, the guy in front was fake paddling, over and over while his girlfriend snapped away on her iPhone and then we got caught looking…but he continued to fake paddle! 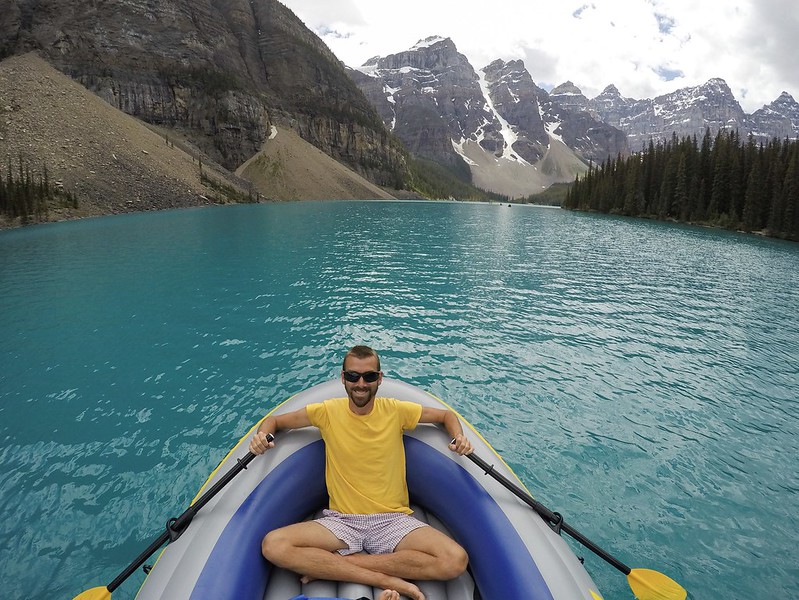 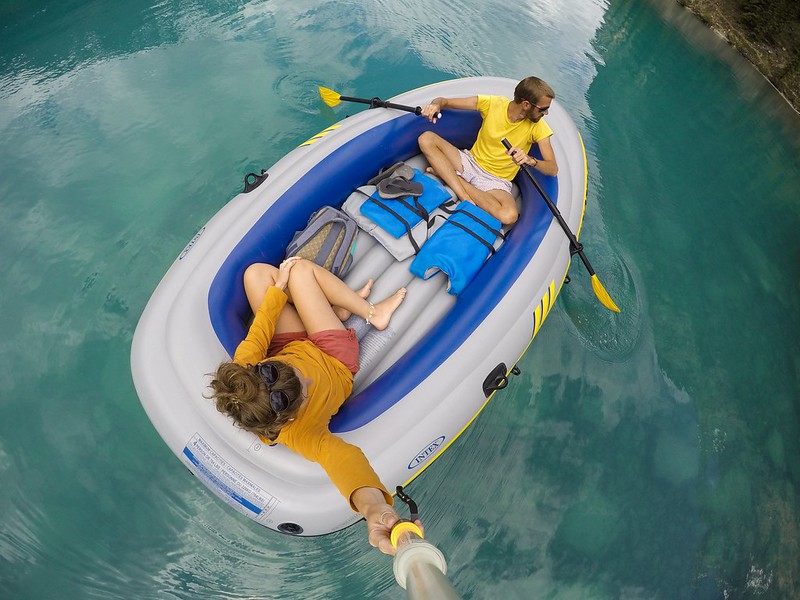 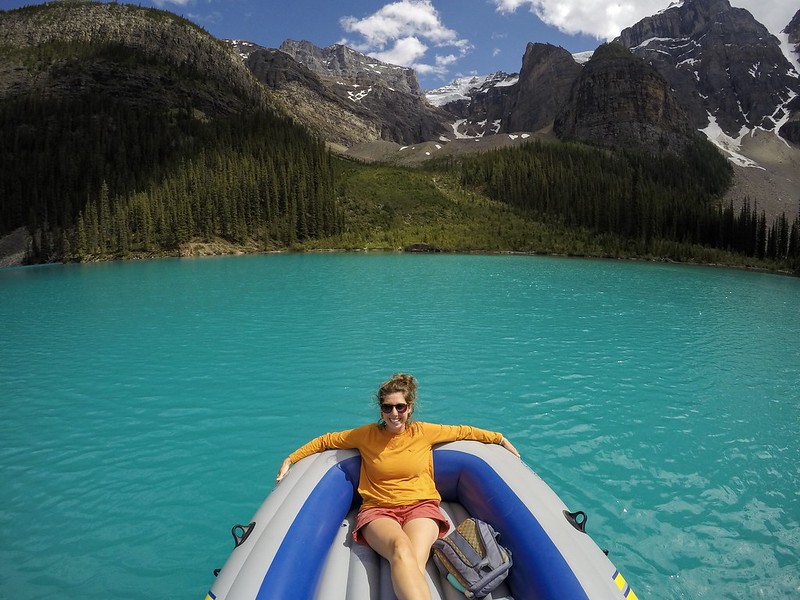 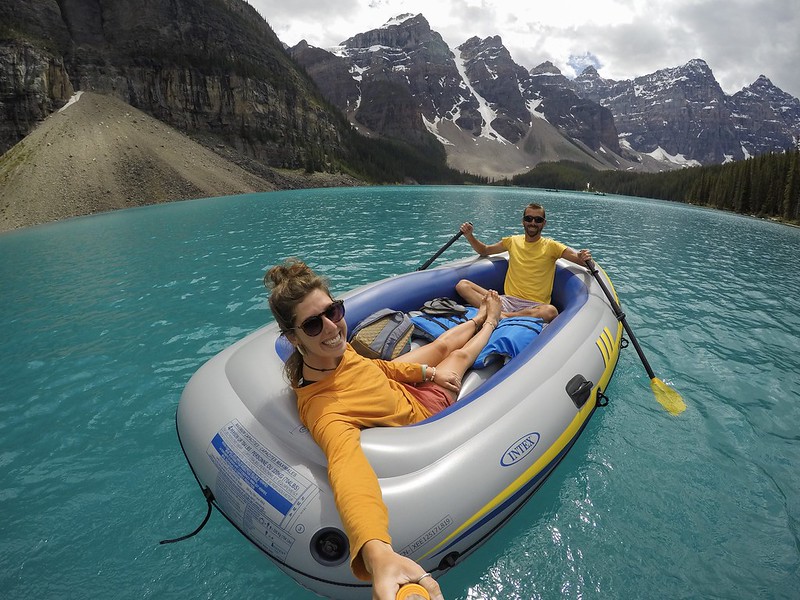 We spent the night camping in Lake Louise overflow which is just a large carpark filled with rv’s and campervans, but it’s the cheapest place to stay in the park. There were a few rude people in rental campers though and one of which was a German guy who pulled up beside us at full speed to grab the spot before someone else did – a bit like they do with beach towels on holiday. He didn’t even give us room to fully open our doors as he wasn’t in an allocated spot and had just parked on the edge. I partially opened our side door and politely asked him to move over so we could open them and he grabbed my door, opening it within a centimetre of touching his rv and said it was fine. So we lost our little ‘patio’ area had we wished to sit outside, and later on I realised my front door was wider than the side one so it actually did hit his rv and we made sure to give it a good old shove every time we unnecessarily went into the front to teach the fucker a lesson. Including at 6am when we left the following morning. Silly really as he could of just parked in the adjacent carpark where there was plenty of room.

On a different evening we sat outside and saw a young guy slowly walking past all the campers, I didn’t think anything of it until he walked by for the 5th time and I told Craig he looked suspicious. Then he asked an old guy something and the man shook his head in response and I thought I knew exactly what was happening – “oh my god Craig he must be asking for money of booze!!”. He continued on his way and approached the next couple along. The lady went into her van and passed him something, we still didn’t know what he’d asked for but as he walked by us he waved a bottle of ketchup in the air with a huge grin on his face and said “took me awhile to pluck up the courage to ask someone for ketchup”. My heart melted. I always judge too quickly, except for that German guy, I could tell he was a bell-end from the moment he pulled up beside us. 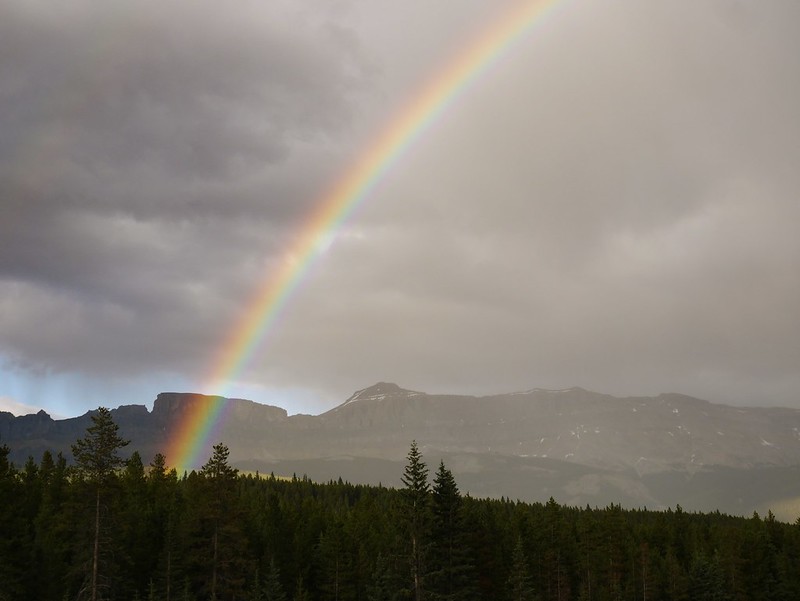