As soon as we crossed the border into Colorado we were greeted by wild horses that galloped across the grasslands and roamed along the roadside like ladies of the night, peering into cars as they slowed down. The area we were travelling through was open range so animals were to be expected on the quiet highway. We pulled over to take some photos but an excitable male decided to put on a very awkward show of mounting a mare and continuously missing the hole, jabbing her in the thigh repeatedly. It felt like we were watching a live David Attenborough documentary that wasn’t going to script. 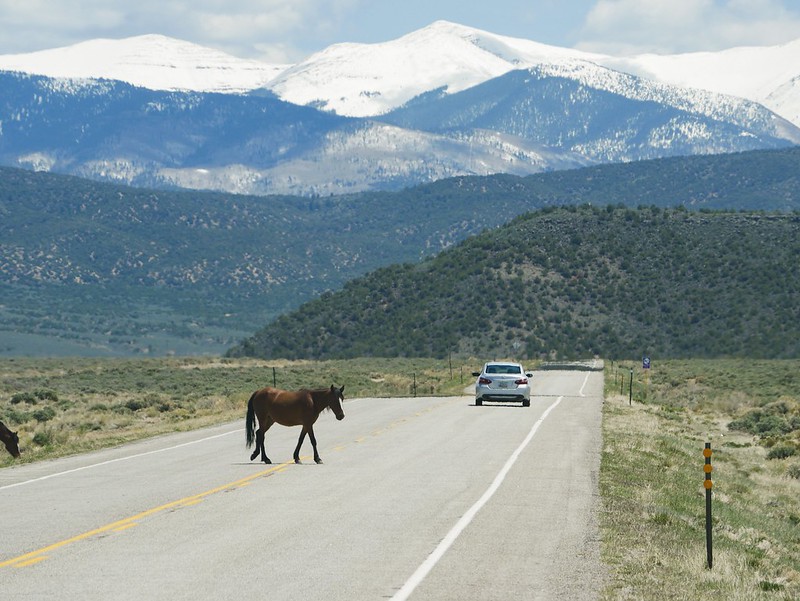 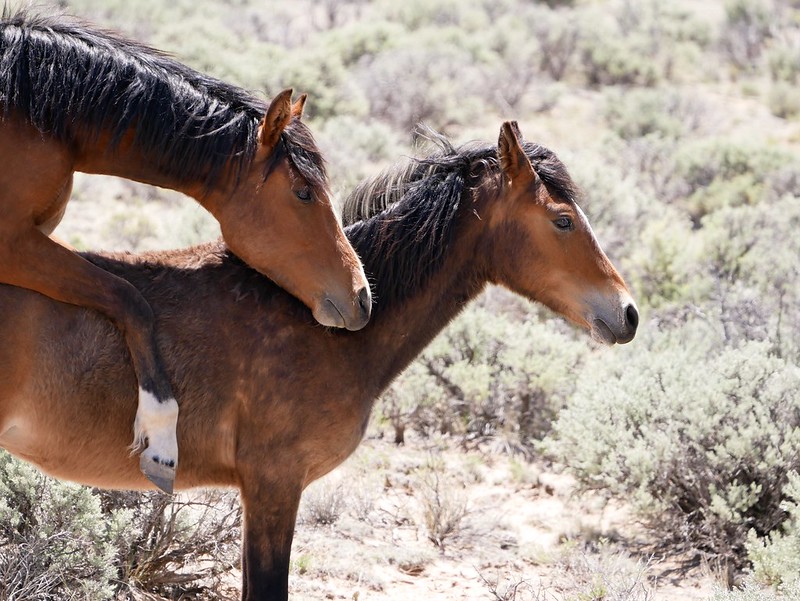 A long line of snowy peaks were visible ahead of us as we drove to the Great Sand Dunes National Park. We had miles of sage bush alongside the road which was home to elk and deer and then steep 4000m peaks rose above the plateau. But then, in what seemed like the most unlikely of places were sand dunes right below the mountains. It was a surreal sight of rolling dunes like the Sahara with snow capped mountains right behind. As it was spring time a wide seasonal stream flowed between us and the dunes so we had to wade through the water to reach the other side. The sun was shining and families treated the area like a proper beach, making sand castles and playing in the water. 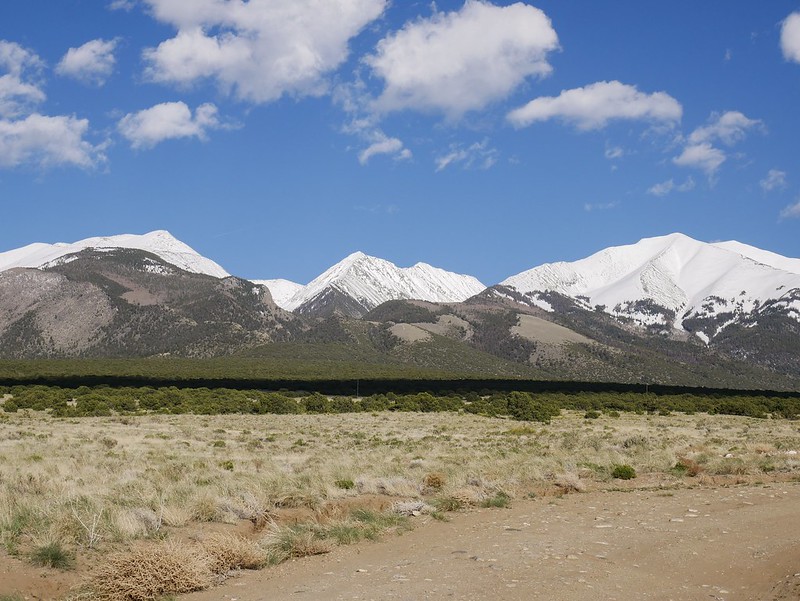 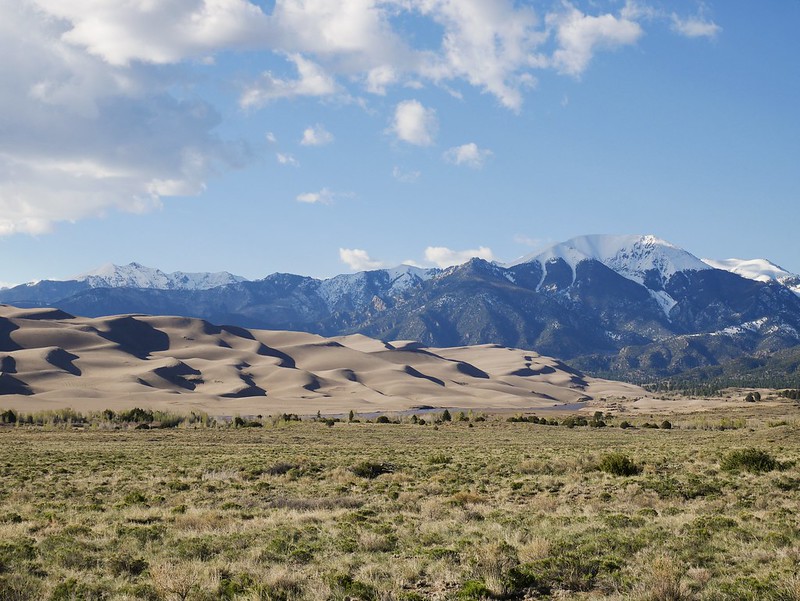 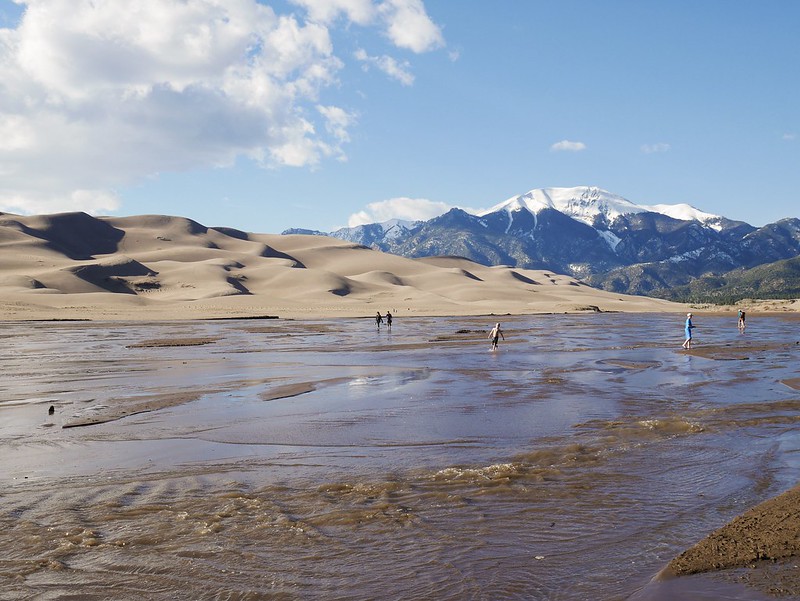 The sand is always blowing in the wind but the actual ridges and highest points somehow remain the same. I remember when we volunteered in the Sahara for two weeks we had some really strong winds and sand storms. Sand was everywhere, in our food, hair, pages of our books and in the fur of all the puppies that lived at our camp. Our host would laugh at us battling the sand storms with shawls wrapped across our faces “no wind, no Sahara” he’d always say.

Most people hike to the tallest dune but it looked a bit too busy for us so we headed the opposite direction in search of a high dune for a vantage point. It was bloody tough work though, sinking through the sand as we trudged uphill. We kept thinking we’d made it up to a vantage point but it went on and on until we walked well away from everyone else. Craig ran down a steep ridge line and I was filming it so I couldn’t believe my luck when I captured him stumbling sideways off the ridge and rolling down the hill. I was torn between laughing and checking he was ok…so I stopped filming and realised it hadn’t been recording, I’d missed the whole dramatic fall!! Craig was more annoyed than I was, saying we could of got £200 if we sent the footage to ‘You’ve Been Framed’. He was fine though, just his ego bruised but strangely as I helped him back up he said he fell on some pot, which confused the hell out of me and he lifted his hand to show me a pipe and tub with weed! Colorado has legal marijuana use and every town has a shop selling it but Craig and I aren’t smokers so he just left it atop the ridge incase the owner came back for it. 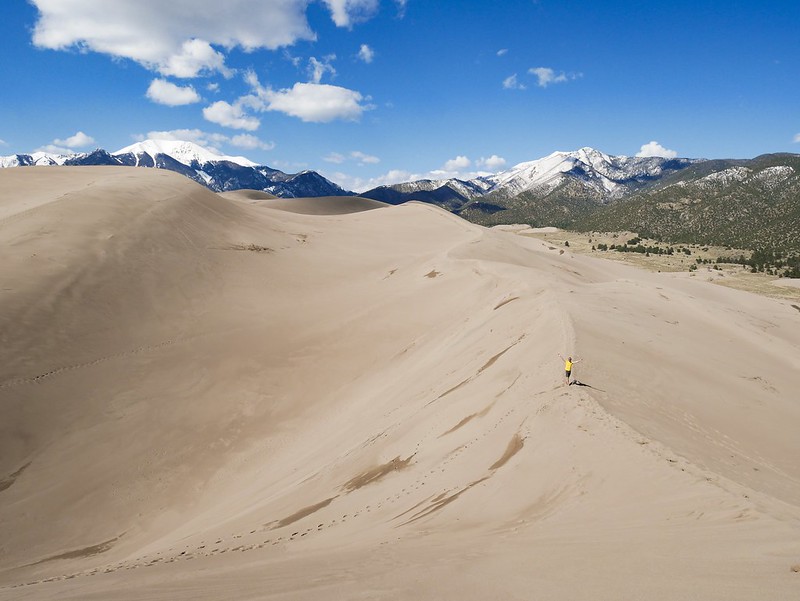 Finally, we arrived at a point where we were above all the dunes. It was a beautiful sight, the desert mixed with alpine scenery. We lounged in the sand before making a quick descent, running down without our brakes on and both surviving without a fall. 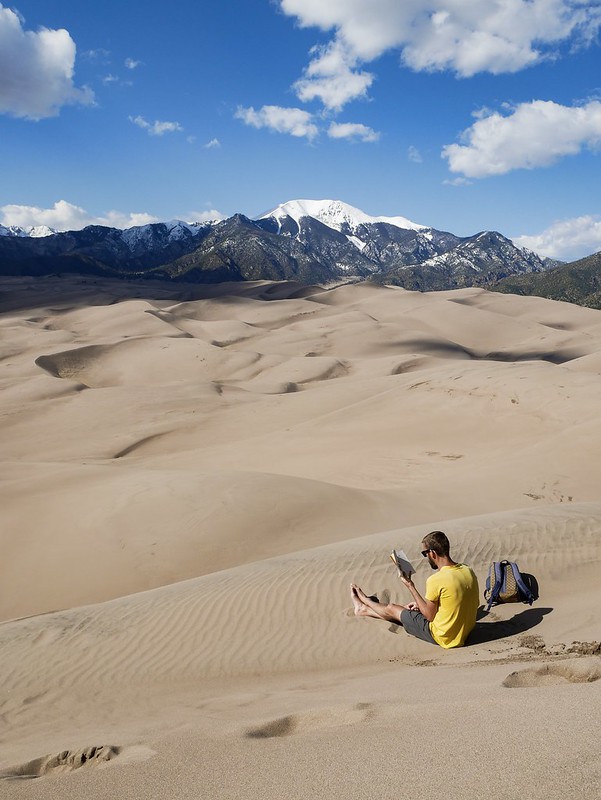 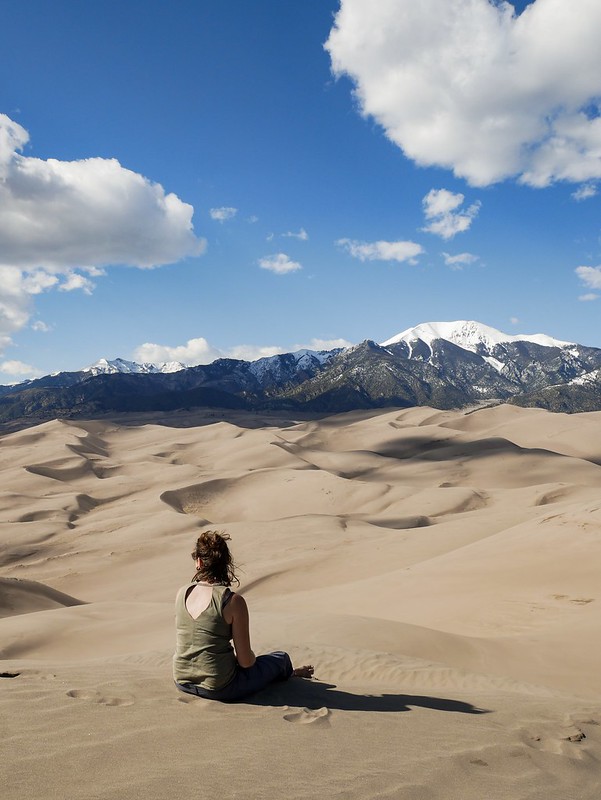 We had more blue skies the following morning so we headed for the high mountains and on the way we found ourselves in an area that looked like Switzerland. The grass was so lush and green and a welcome sight after weeks exploring the dry deserts. Farms had cattle grazing and pine forest climbed the slopes. We stopped at a visitor centre to enquire about hot springs but were sadly informed that the snow was just too deep to reach them. Colorado had a huge dump of snow late in the season which has caused a very delayed spring and a lot of the hikes are still impassable. The worker did inform us of a free hot spring in Pagosa Springs, under a bridge right by the visitor centre. So we headed there and stopped at the visitor center where the worker seemed to be on some sort of commission from the hot spring resorts because as soon as we asked her about free, natural hot springs she put on a very patronising voice and said there’s no such thing. I had to play it dumb and say “it’s just we’ve been to quite a few where locals make a little rock pool beside a river for example…” and she acted like I was mad “oh no, they have to be regulated at a resort or you could put your hand in and burn it right off!”. She was really starting to grate on me, so I pushed her “so there’s no hot springs like that around here…not in the river outside this building?” And finally she had to admit it and said there was one but the river was running so high that we’d be swept away. So we headed out, walked under the bridge and found a steaming rock pool by the river. There was absolutely no way you could slip out and get swept away by the river. So we got into our swimmers and had a little dip. It wasn’t the best hot spring due to a silty bottom which disturbed when we moved, but at least it was free. It’s a shame there wasn’t a view to the visitor centre from the pool as it would of felt great to soak in the water while sticking my middle finger up at that lady. 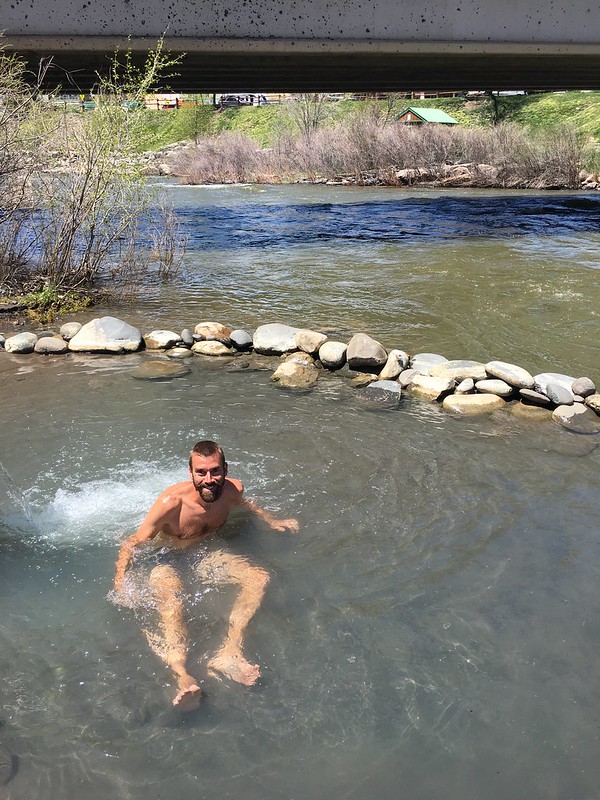 On the plus side she did recommend an area to hike that turned out to be beautiful. We were treated to more Swiss style scenery as we traversed the lush green grass and spotted deer in the nearby forest. The mountains were far away and only reachable along dirt roads so we didn’t venture too deep and instead enjoyed a warm night camping in the nearby National Forest. 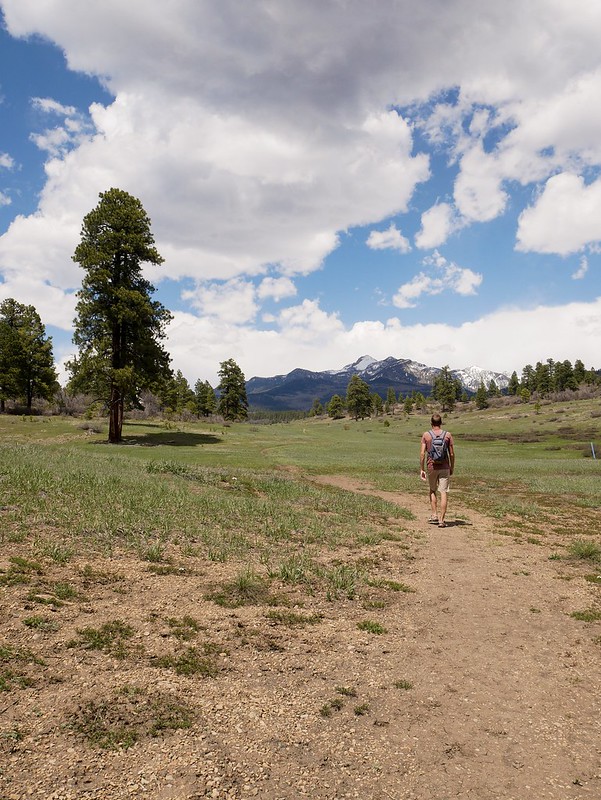 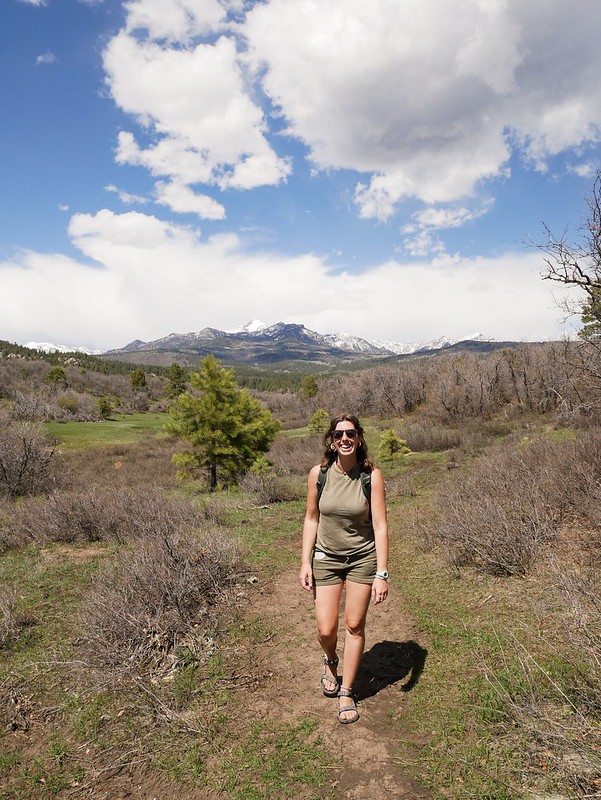 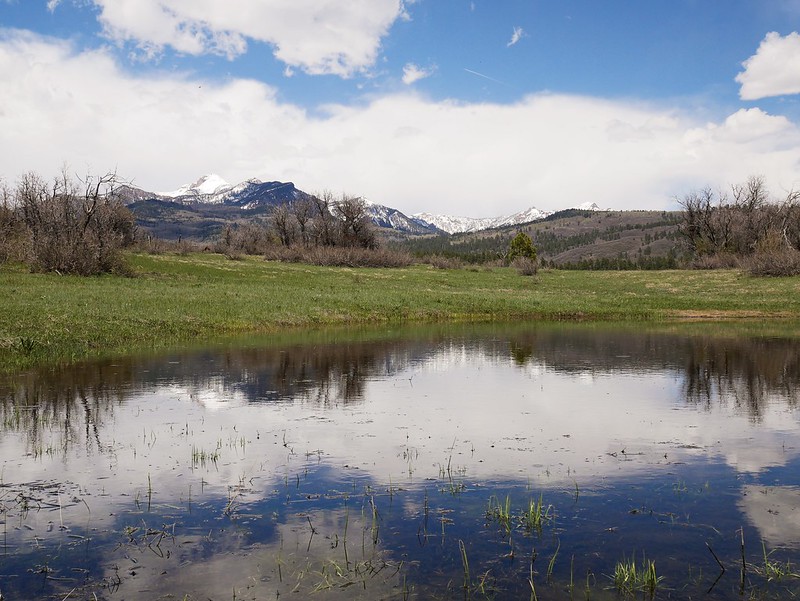 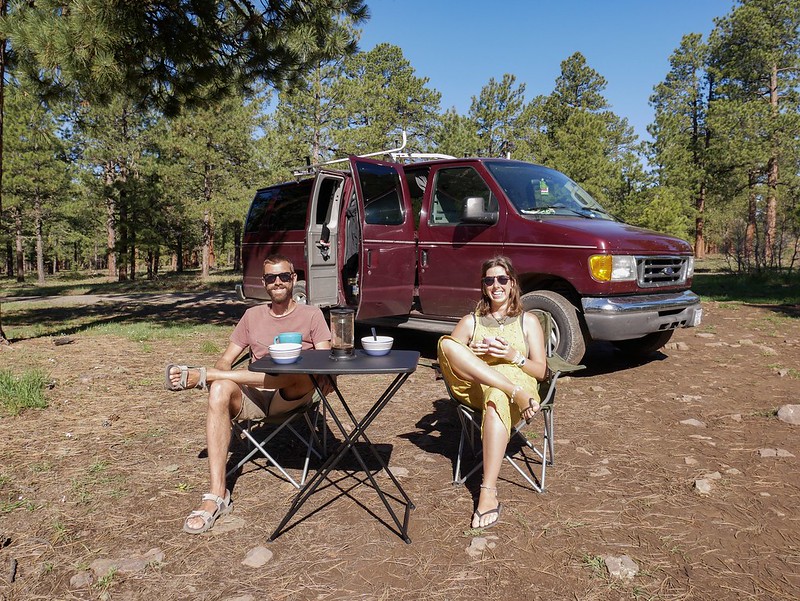