We visited Zion National Park back in winter 2010 and it was the first glimpse we got of desert scenery. As soon as we entered the park we realised we were desert people and instantly fell in love with the place. 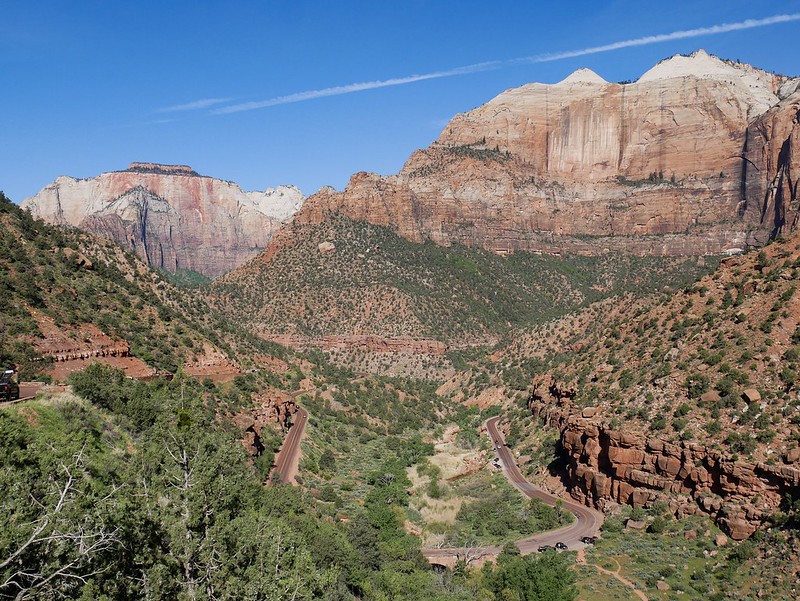 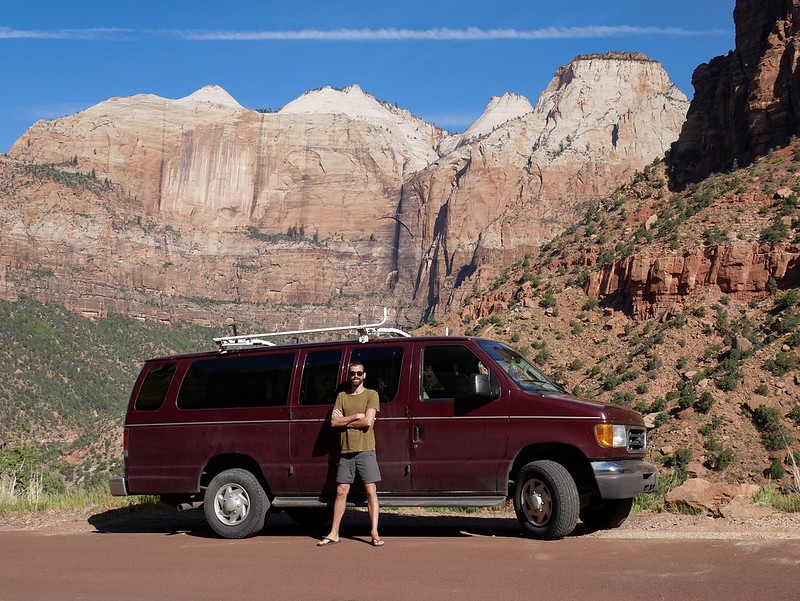 The scenery in Zion is pretty mind-blowing. There’s huge, sheer walls rising up to 2640ft high and they wind their way through a valley where the Virgin River flows below. Quite impressive when you think that small river is what carved the dramatic valley. The iron minerals give the rocks their unique red tinge and the bottom of the valley is filled with lush green forest – a true oasis in what would normally be a very inhospitable environment. So we were excited to return to the park again but of course a lot had changed. Apparently parking became a big problem with 5000 cars visiting per day and only 450 parking spaces so they introduced a shuttle service like Yosemite. What a drag…but luckily it was much more organised and they made sure to only fill up the seats so that there was always room for people to stand. Plus they were running every 10 minutes so we never had to wait and enjoyed some information about the park on an audio speaker. 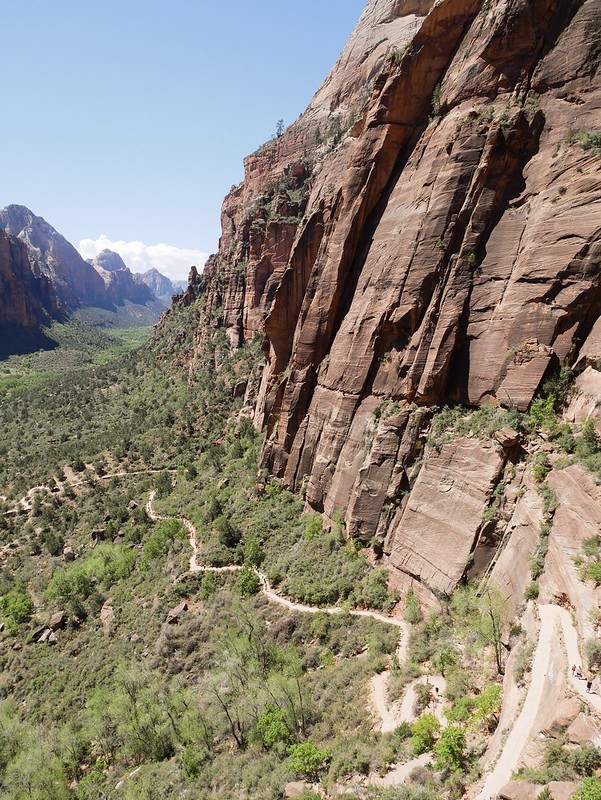 The main reason we came back to Zion was actually to complete a hike that we didn’t manage to finish in 2010. It’s called Angels Landing, supposedly because it’s so high only angels can land on it. The start of the hike involves numerous switchbacks beneath the sheer walls until you reach the first ‘top’ where some people choose to end their hike as the trail quickly turns into a very adventurous route. Angels Landing is extremely narrow with steep walls that come to a sudden halt 1488ft above the valley floor. Its so narrow and dangerous that metal poles and chains are in place for hikers to hold onto. When we tried the hike for the first time Craig got really bad vertigo and had to turn back while I continued until the trail became covered with ice and it was just too dangerous if I slipped, so neither of us made it. 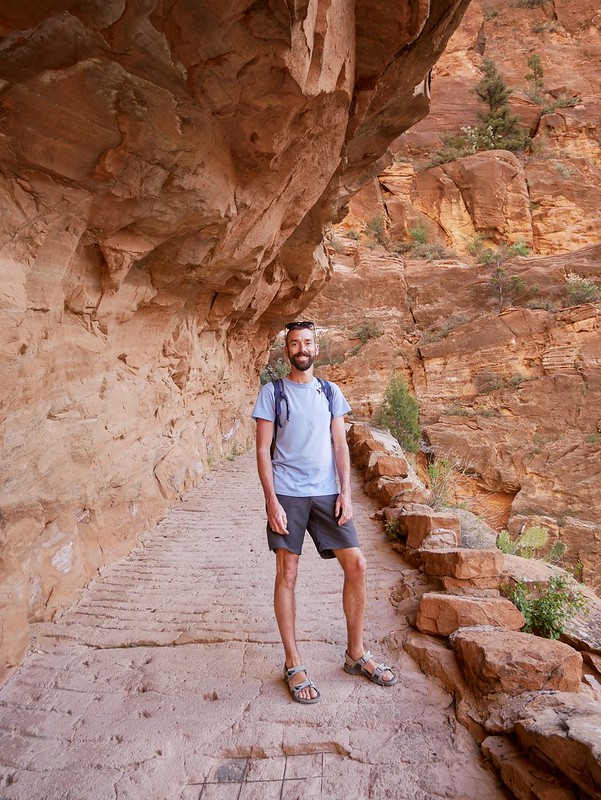 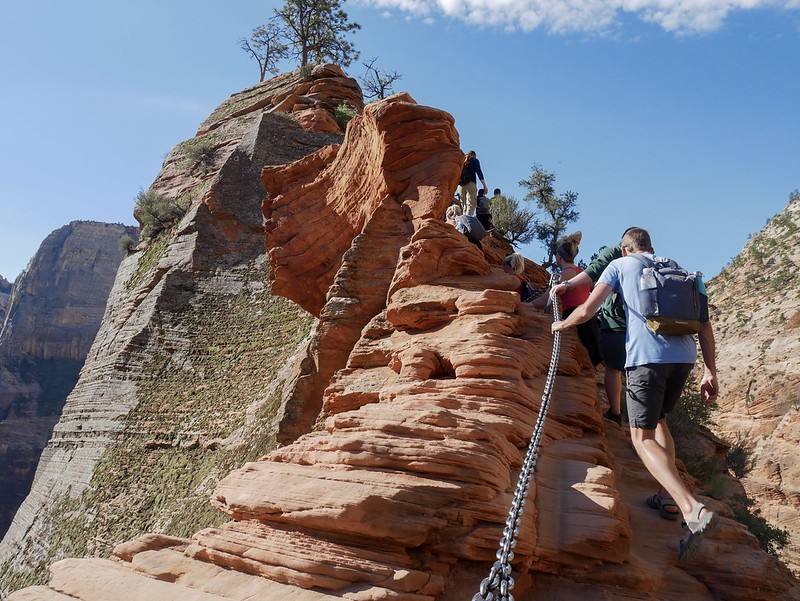 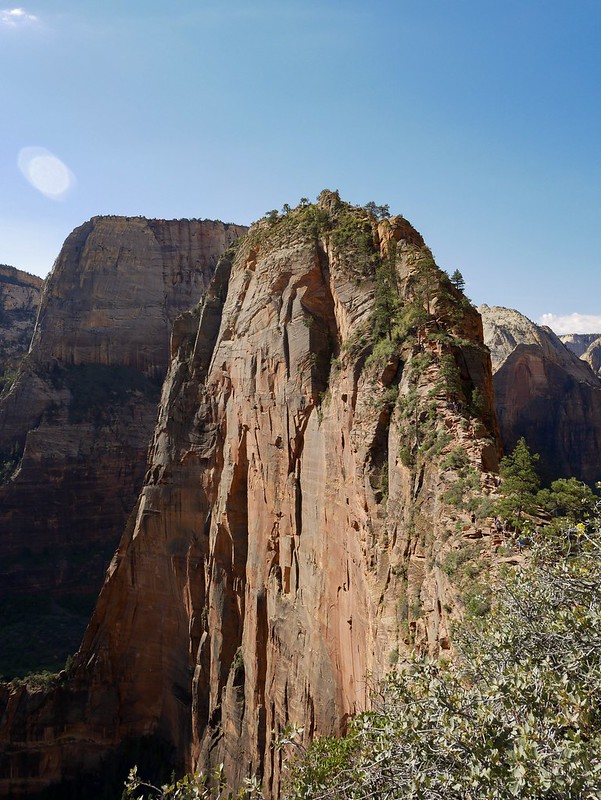 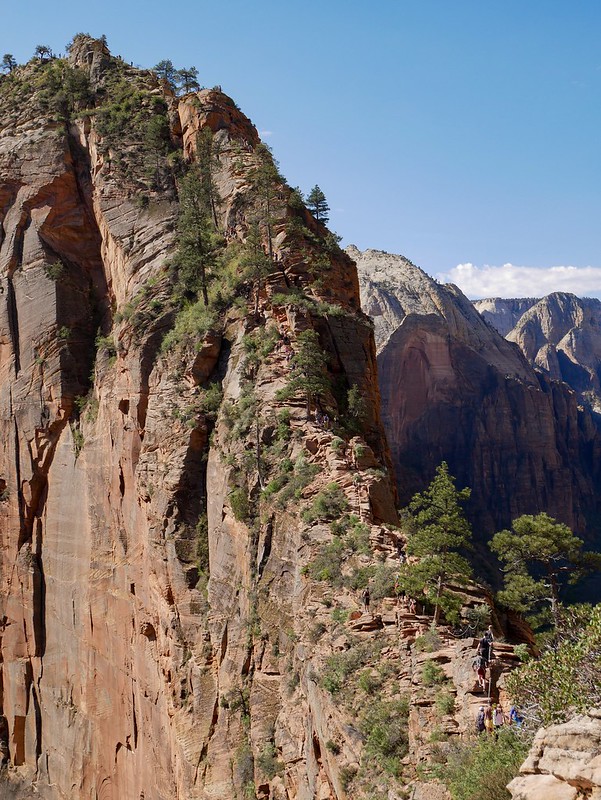 This time it was a hell of a lot busier with a long queue of people going up. The trail was only wide enough for one person so occasionally the queue would all stop in a wider area so that people descending could pass us. At times the rock we were walking along was only a couple feet wide with sheer drops on either side but somehow I never got giddy. I guess I felt safer as there were so many people doing the hike and I was just focusing on where my feet and hands were going next. 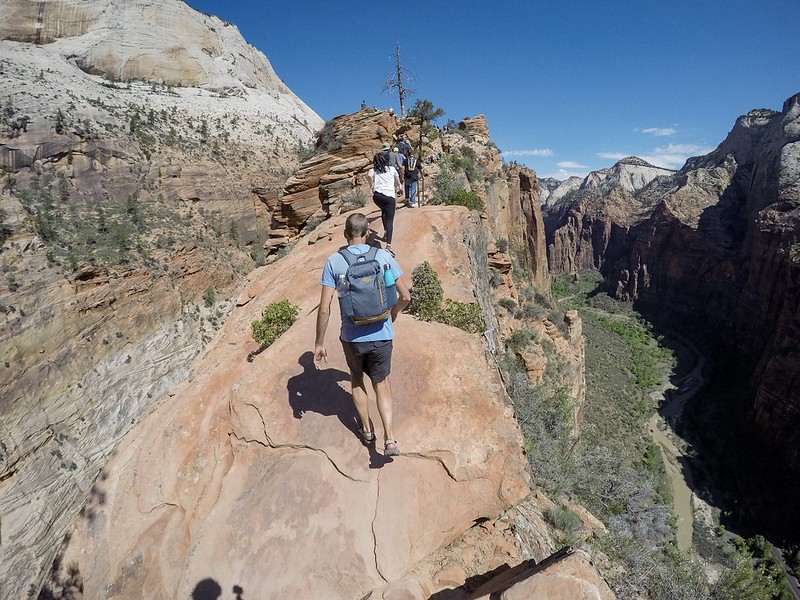 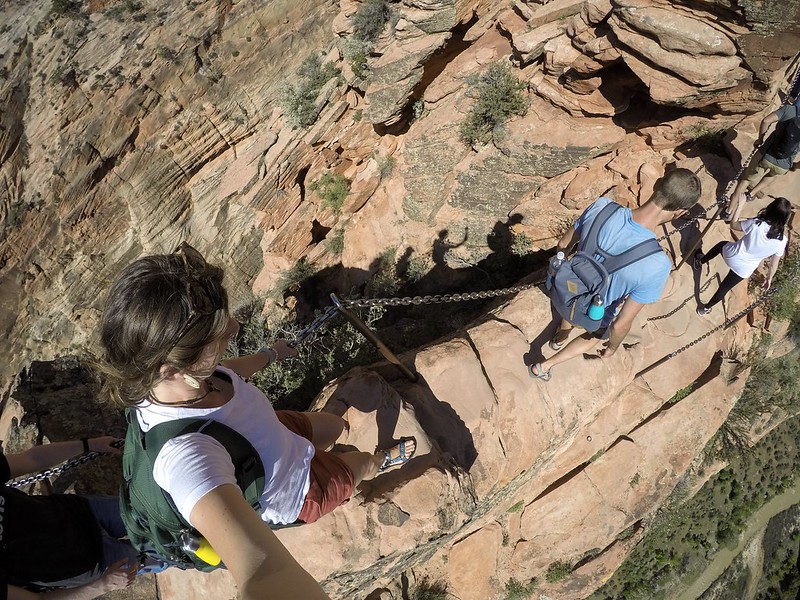 We successfully made it to the top this time though and enjoyed some snacks with the most incredible view of the valley in front and behind us. We passed a few families with young kids – one of which tried to overtake in one of the most dangerous spots. We were all descending and holding onto the chain while the dad led his family on the outside of us beside the drop off. Halfway down he realised it was silly so the family just stopped in everyone’s way and they crouched down and held onto the chain while we awkwardly shuffled around them. 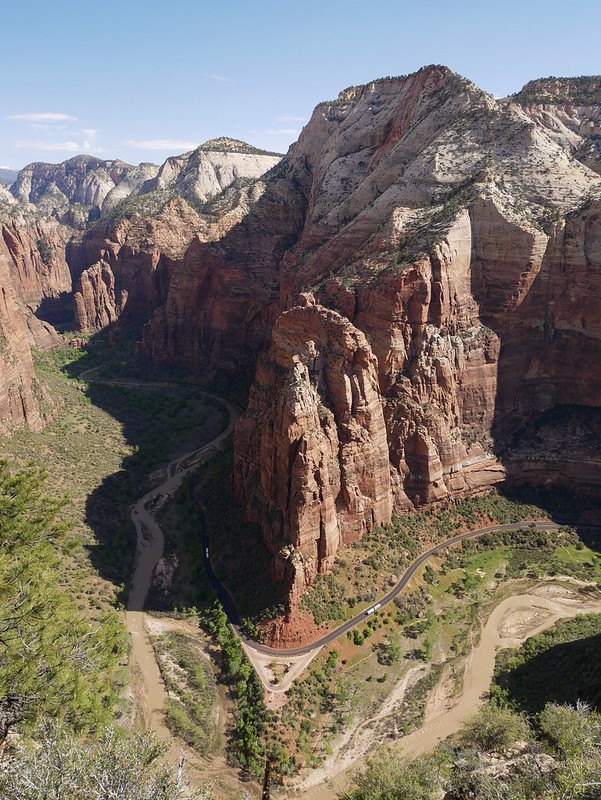 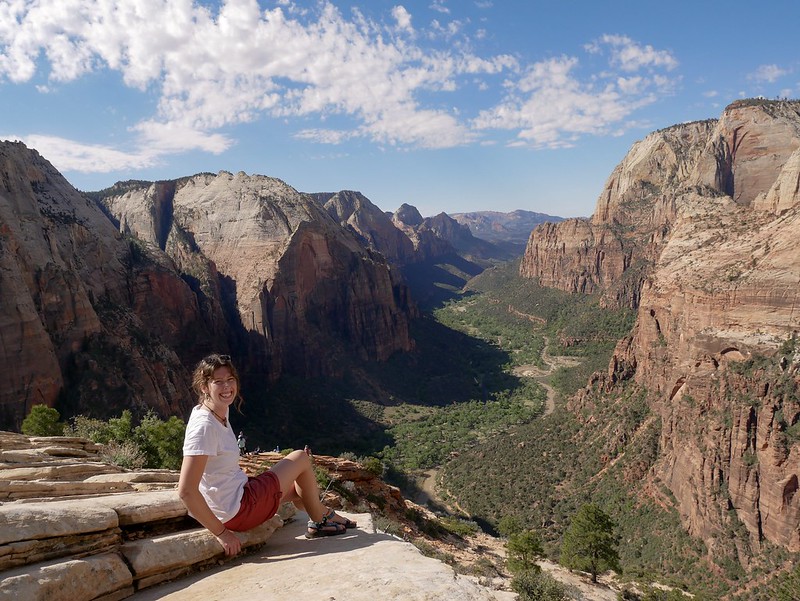 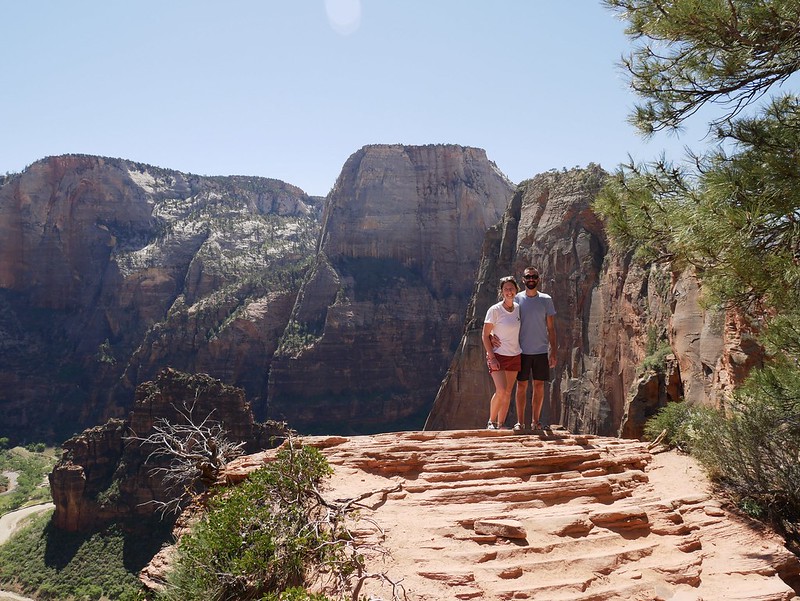 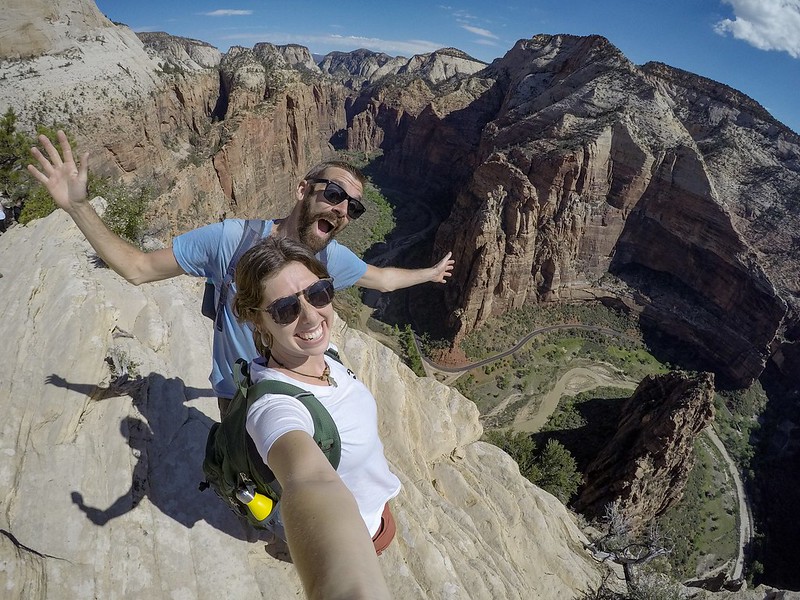 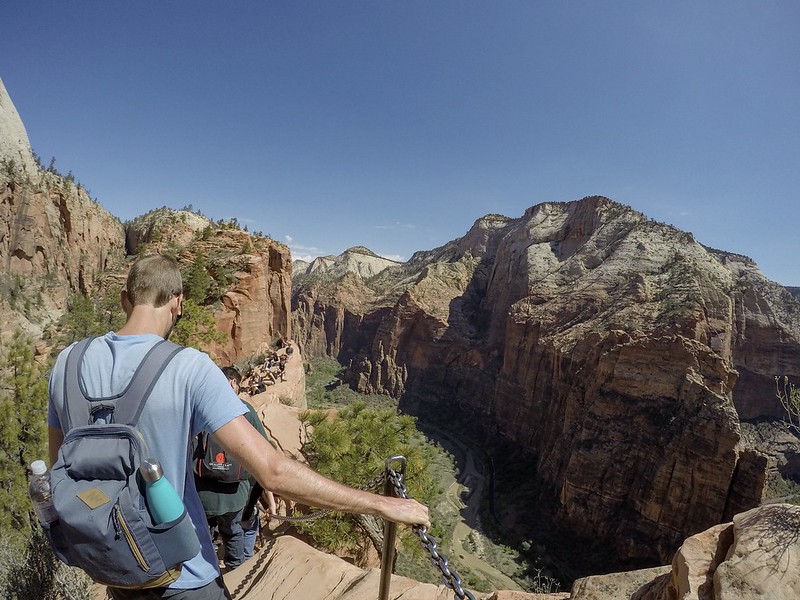 It was a quick walk back down the switchbacks and straight onto a bus to the end of the road. We wanted to hike through the narrows along the Virgin River but it was closed due to extremely high water levels. In fact they’ve just had a massive amount of unseasonable rain which washed out part of the road structure as you exit the park, leaving just a floating slab of tarmac. This meant the road was closed for another week so we had to take an alternative route. 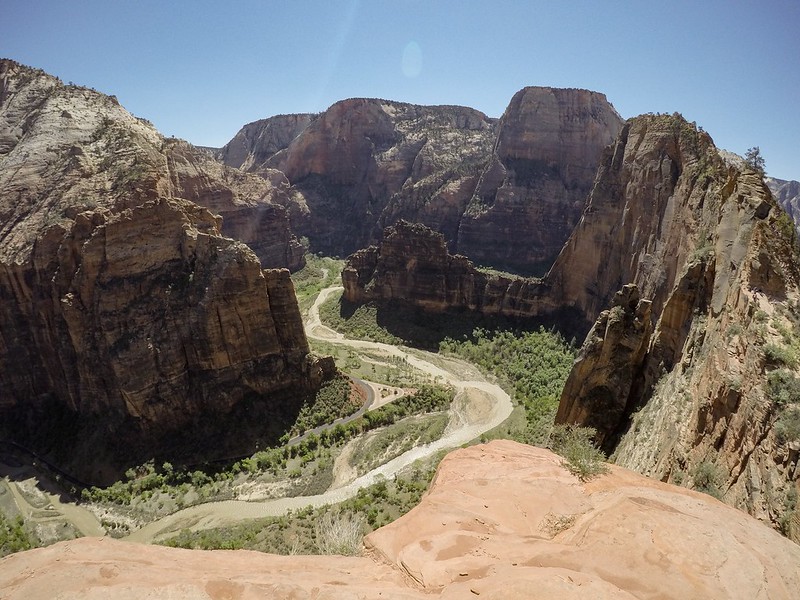 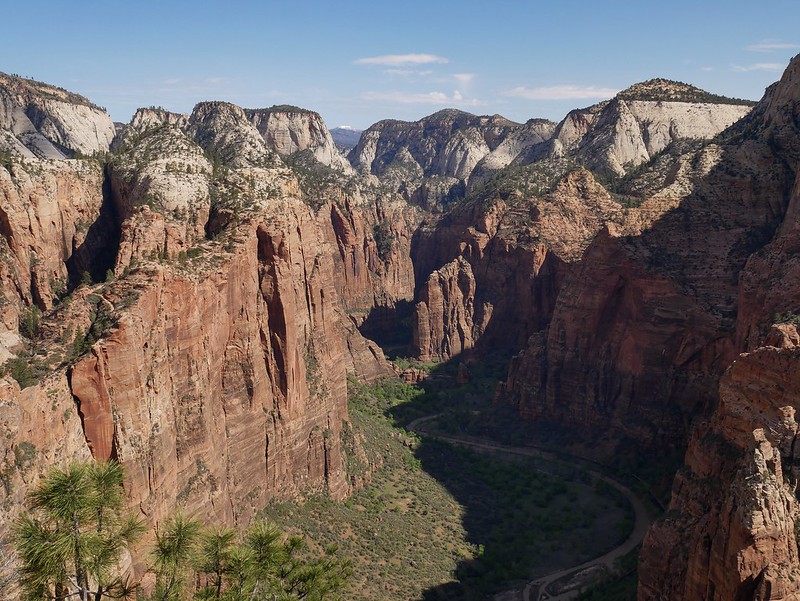 Anyway, we walked along the river passing lots of irritating people who were feeding and petting squirrels which is illegal. Sometimes I really wish I was a park ranger, I’d be more brutal than a parking warden, dishing out all the fines. It’s strange that they even find the squirrels fascinating, I’m pretty sure they hang out in the shittiest of city parks around the world where crack heads sleep beneath their favourite oak trees. They also carry diseases harmful to us and we probably carry stuff harmful to them so it’s best to just let wildlife be wild.

A few of the parks hikes were closed due to washouts along trails so we opted for the Lower Emerald Pool hike in the afternoon. It led us past a very tame deer eating in the woods and then to a sort of natural amphitheatre in the rocky wall with a waterfall gently trickling into a small pool filled with murky water that didn’t look emerald in the slightest. 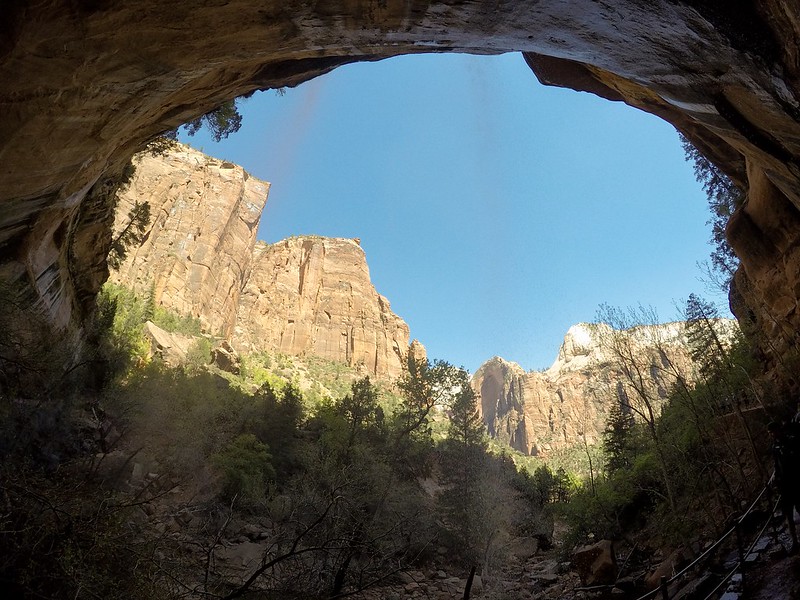 We had planned to exit the park through the west as the road was still closed but as we checked in the visitor centre we were told it would open the following day at 8am!! So all of our plans changed again and we headed east. 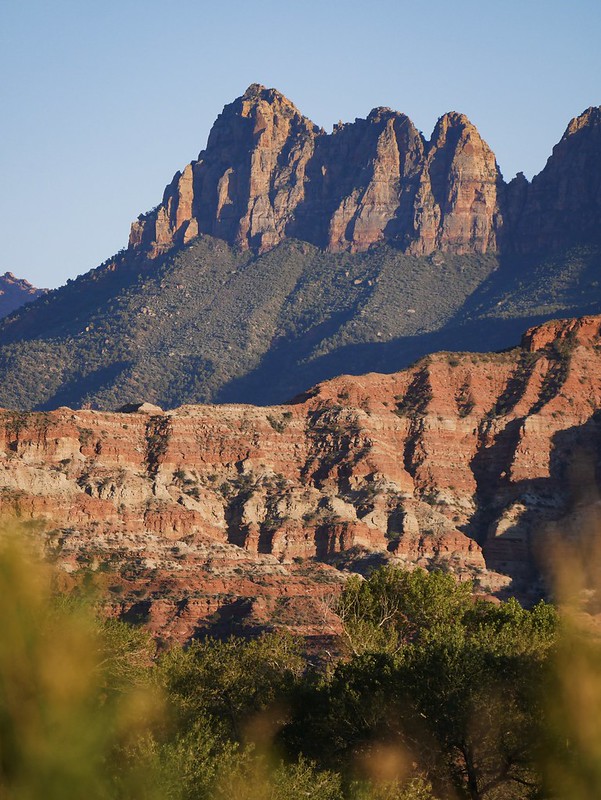