The Valley Of Fire is only a short drive from Vegas yet it feels like a complete world away. It took us two days to get there from Yosemite, cruising from the grassy lowlands to the dry desert dotted with Joshua trees and tumble weed. There wasn’t much to do on the route but we did detour to Calico Ghost Town. It was about to close so we managed to get in for free and have a short stroll around the wild west style buildings. The town used to be bustling with miners but today the rustic wooden buildings housed gift shops. 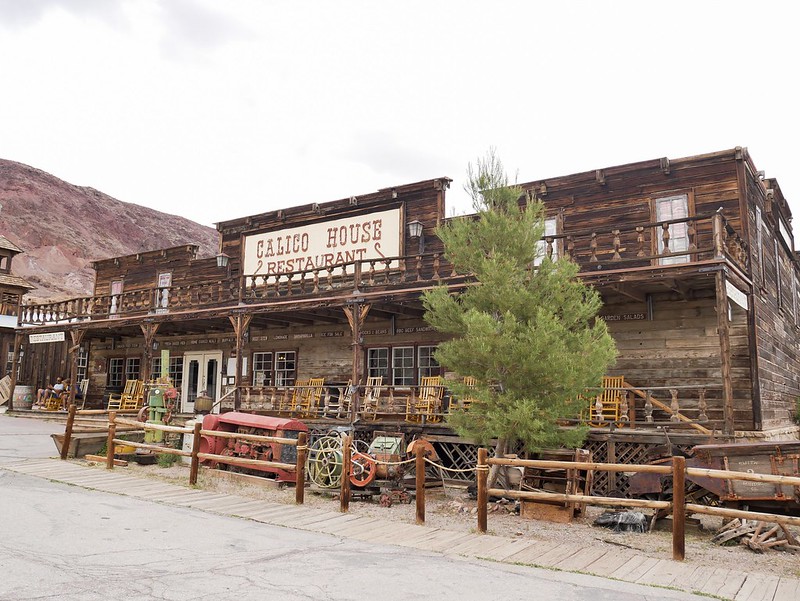 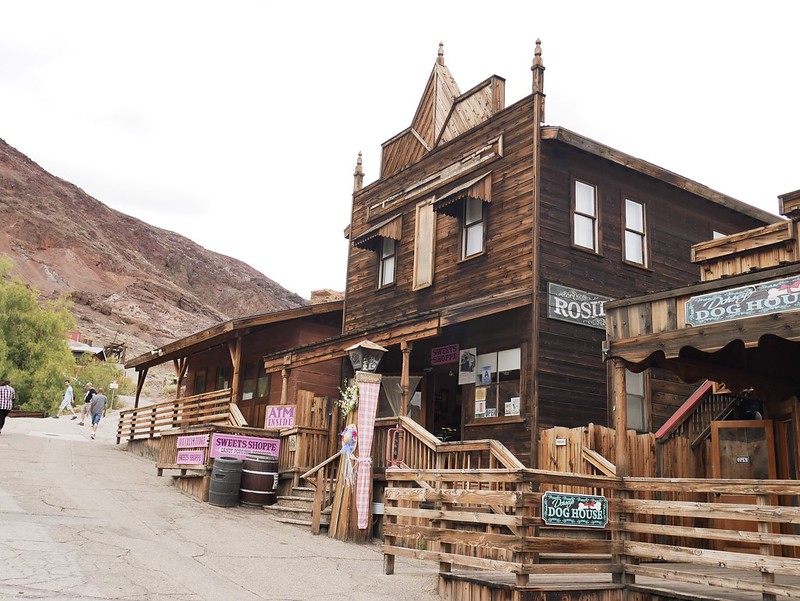 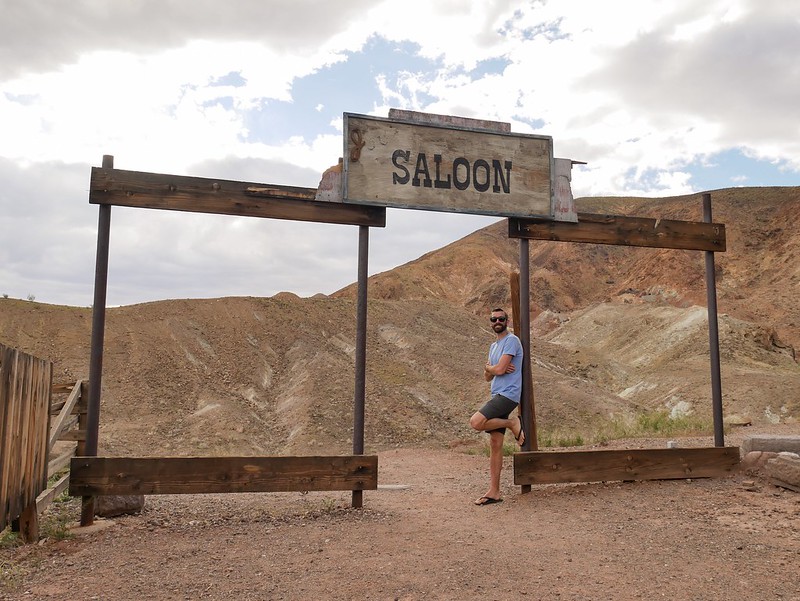 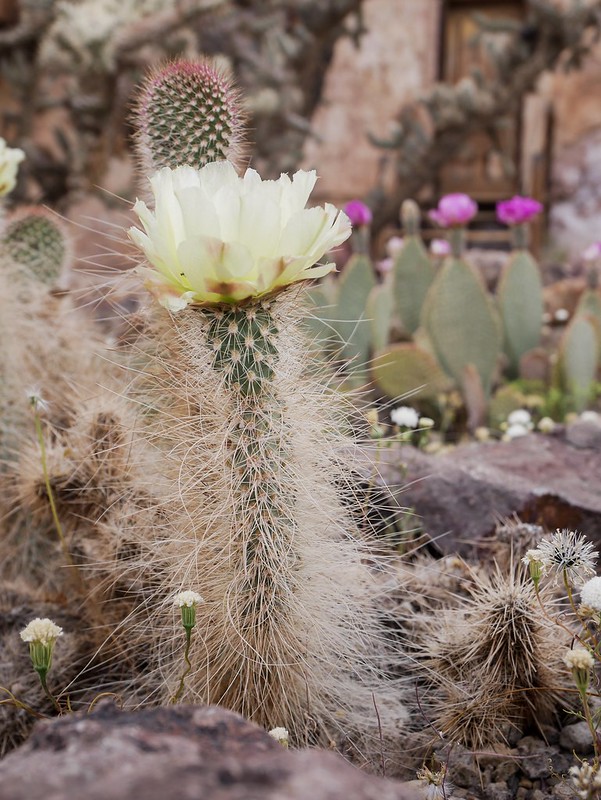 It was approaching dinner time so we searched for a place to camp for the night. We pulled off on a dirt track and then reversed to get flatter. That’s when Craig realised it didn’t feel right – we were stuck. We stepped out and were shocked at how fragile the track was, it was just dust that we could easily push away with our feet. Our rear tires weren’t getting any grip and were sinking into the dirt but luckily Craig noticed before he tried to reverse anymore. We gathered any small rocks we could find and laid them in the dirt by the rear tire. Craig was pretty stressed by this point as we only had one chance of getting out. He had to reverse back while turning 90° without stopping to keep the momentum going. I was standing outside watching as he put his foot down and managed to roll over the rocks. There were banks along the dirt track which he accidentally veered up while reversing at such a speed, but we made it. Panic over. It was a good learning lesson but it’s made us paranoid about what’s safe to drive on now. 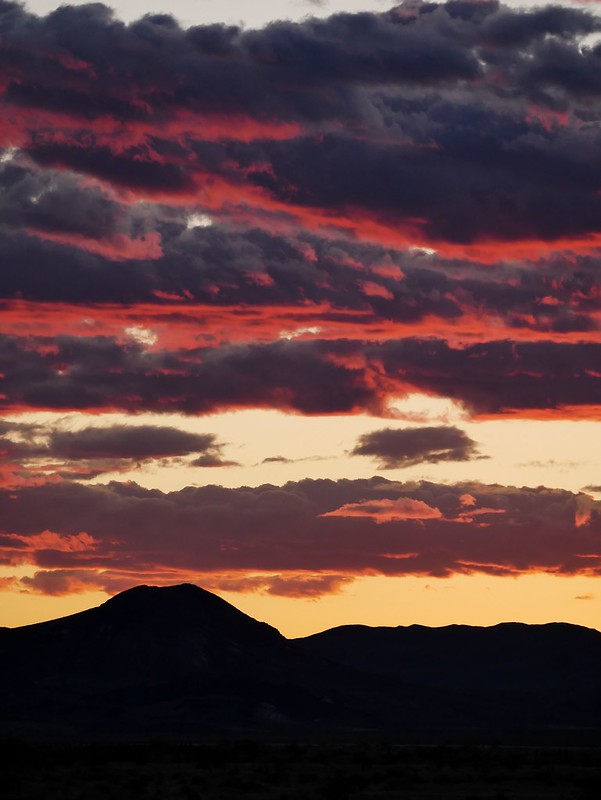 We were just going to drive around Vegas as we’ve been before but then we veered off the highway for a little reminder. Amazingly we found free parking right beside the strip so I made us some tortilla wraps with a view of The Palazzo casino. We had a stroll down the strip and popped into a few casinos for the air conditioning. Then we were thirsty so we sat down at a $1 spinning wheel game and both got a free beer from the waitress, man I love that about Vegas. We tipped the lady, refreshed ourselves with Corona and spent $6 gambling – big spenders as per usual. 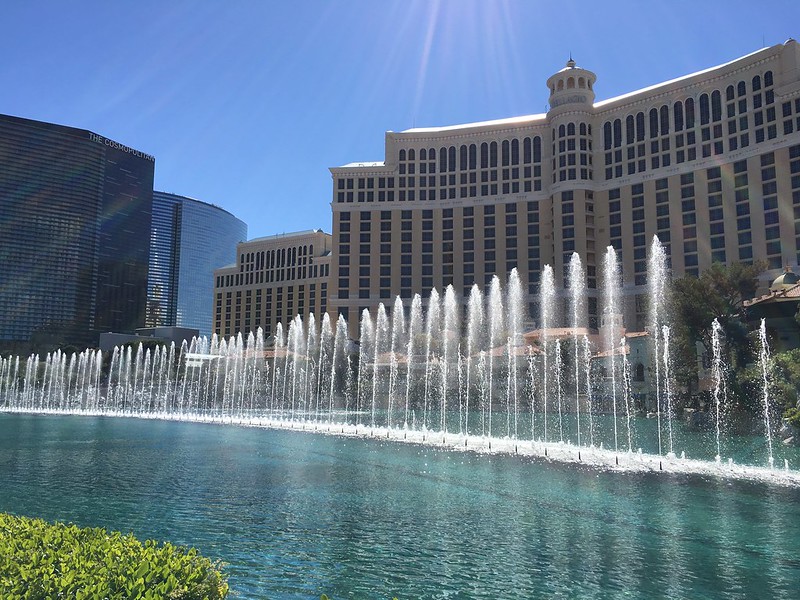 The next morning we drove into the Valley Of Fire State Park and it was a delightful drive. Once we entered the park however the scenery became even more impressive with red rock formations all around us. The road climbed between fiery red walls until we plateaued with a view of all the canyons and rock formations. We stopped for some short walks where signs warned people of dehydration. The heat was unbearable and around 35° as we walked along sandy tracks past cacti with blossoming flowers. I was melting though, finding it quite unbearable and wondering how we would make it any further south like we had planned. 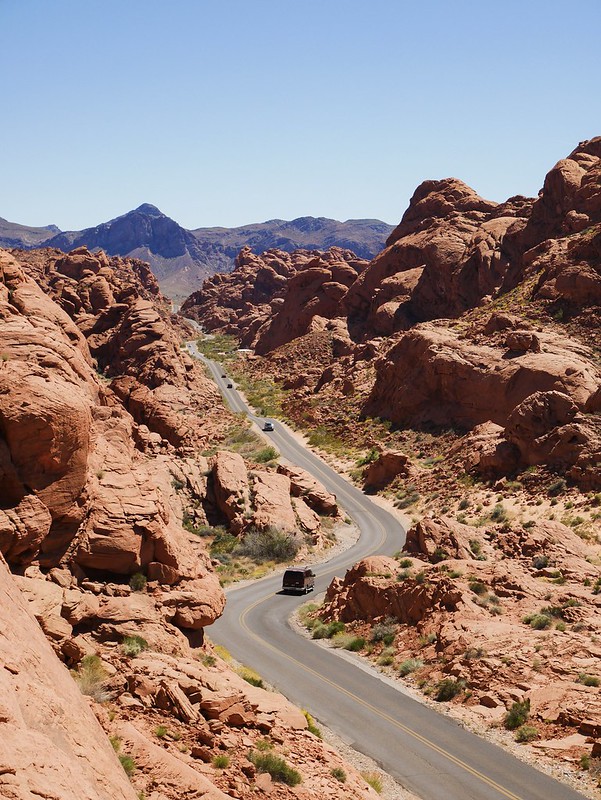 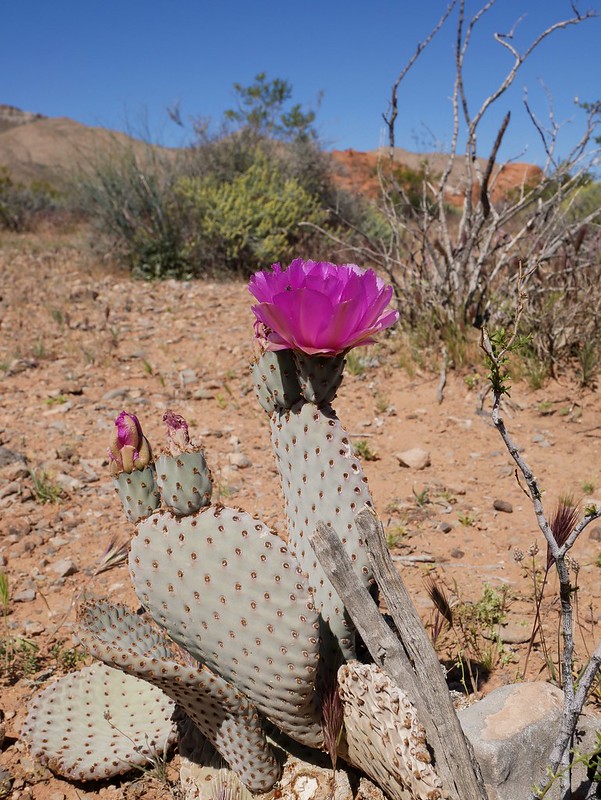 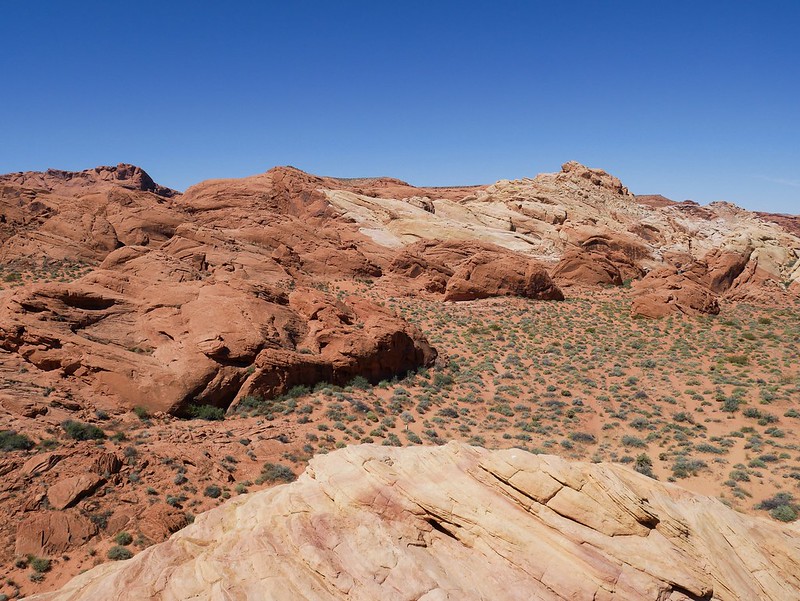 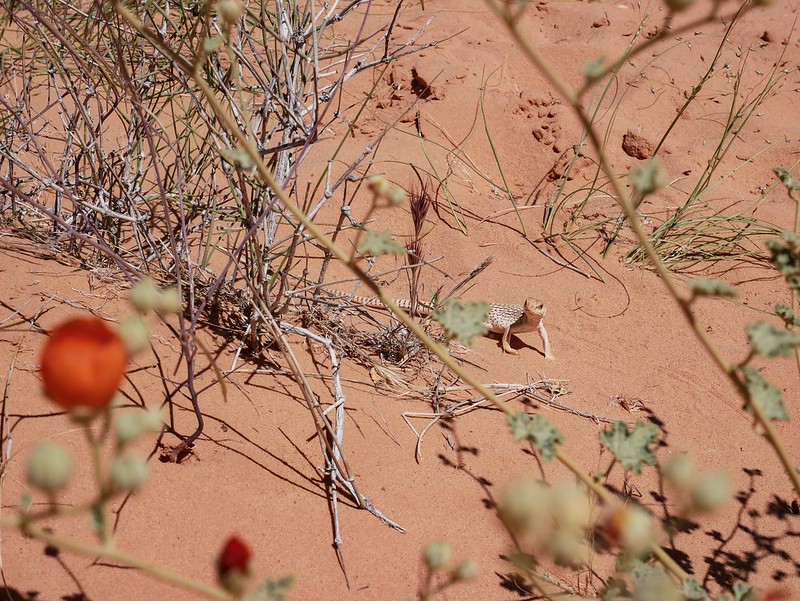 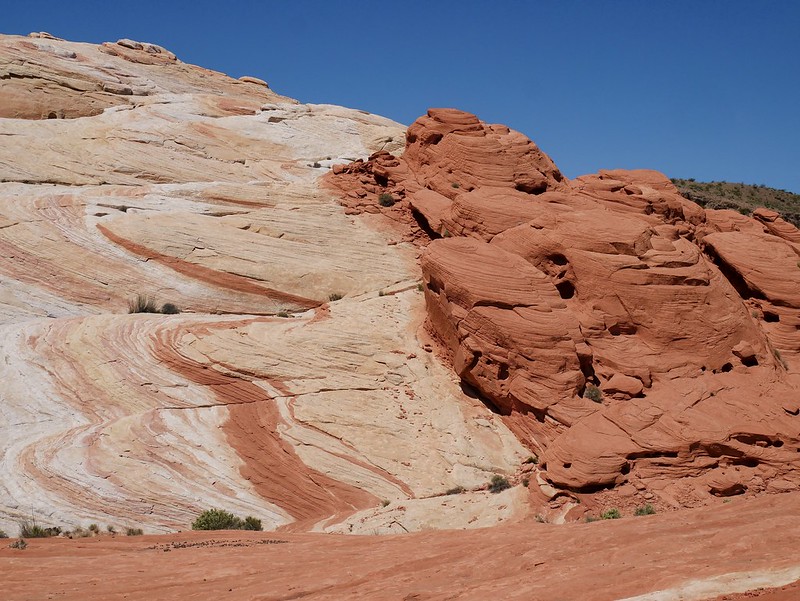 We walked to an amazing rock where different minerals created a beautiful pattern of different coloured lines. Then we headed to an area where the rocks were white, orange and red and a cool slot canyon took us through part of a loop trail. 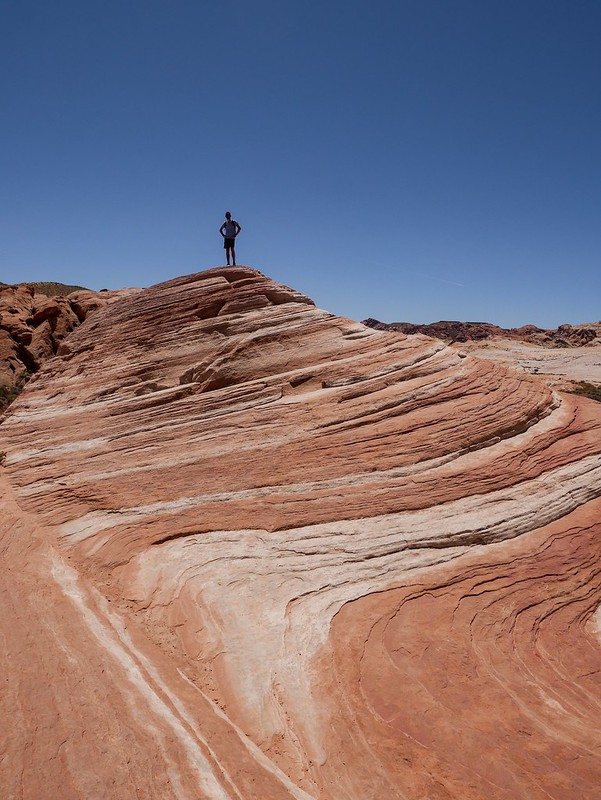 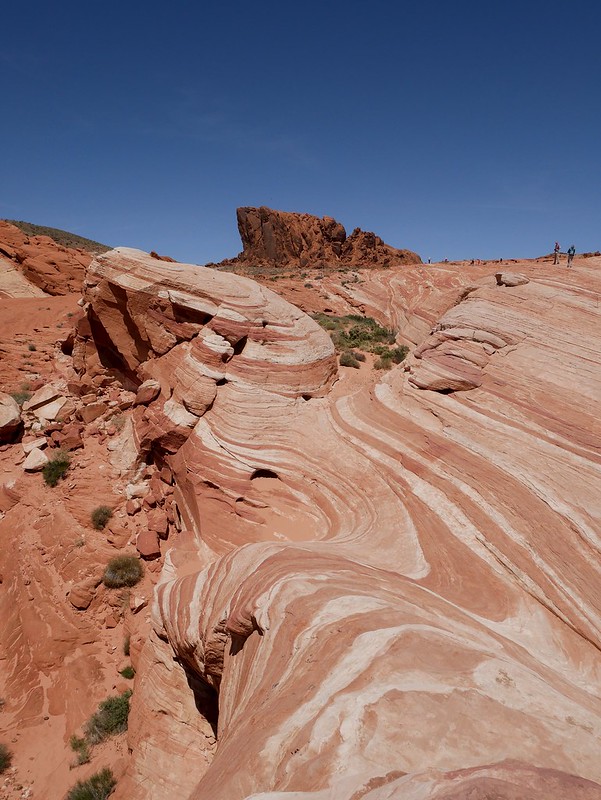 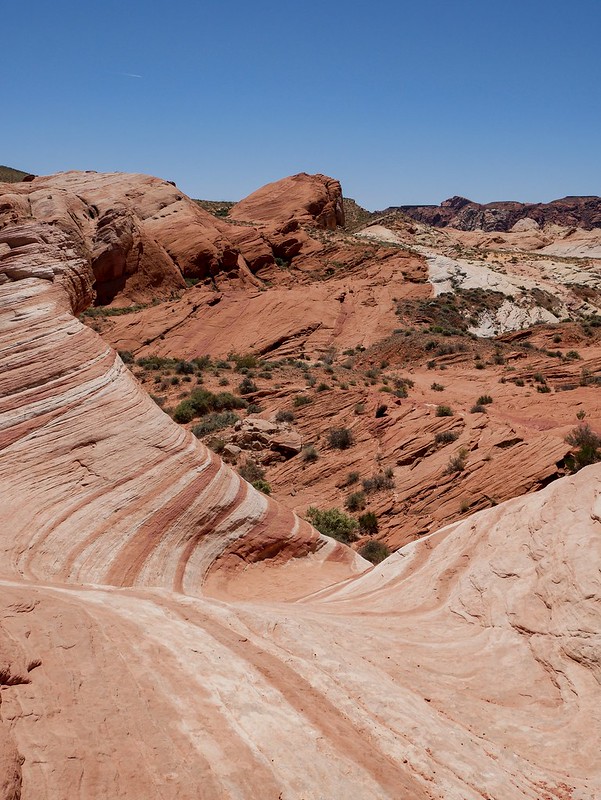 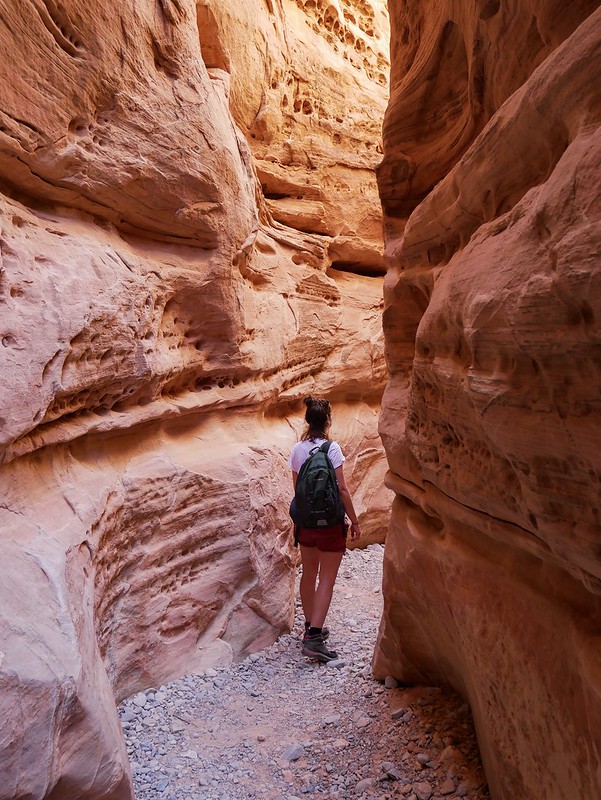 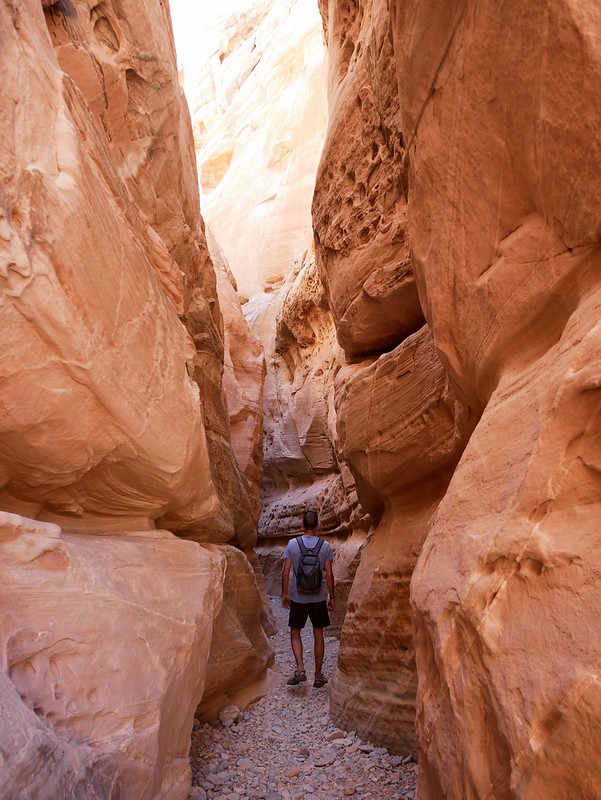 By the late afternoon we were zonked but managed to find the only shady parking spot for Ruby the van. Beside it were two rock formations where Craig located a patch of shade for us to put our chairs on and enjoy a fresh breeze which was well needed. We managed to free camp in a nice spot outside the park and were very happy we made the detour to the valley of fire – which really lived up to its name, in more ways than one! 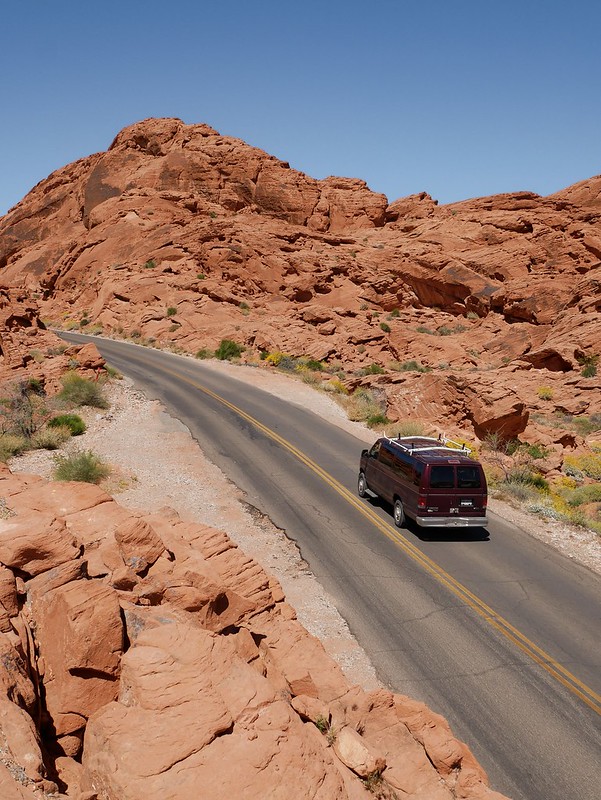 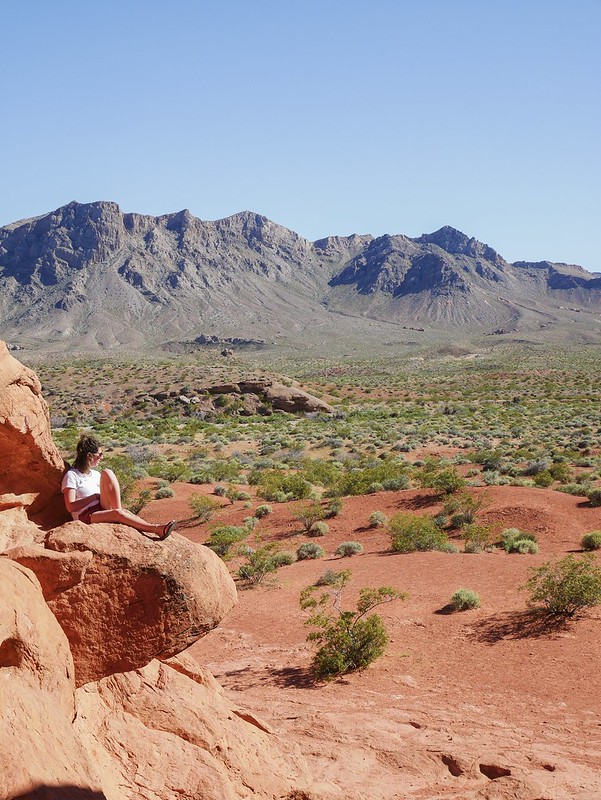 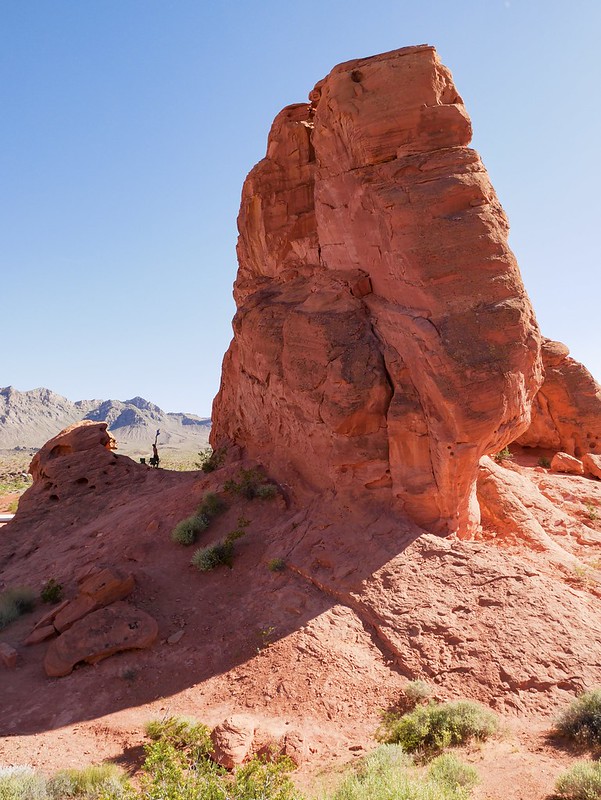 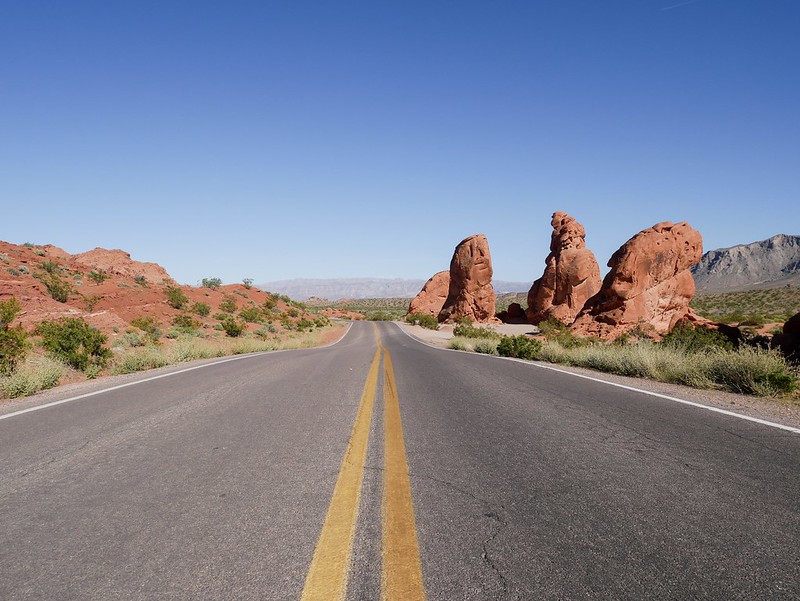