There’s not many places in the world where you can see more wild animals than humans but we did exactly that on a recent roadtrip through Vesterålen. Craig was given the job of driving a group of guests to the most northerly point of the archipelago for a whale safari and I managed to grab the final seat in the van and tag along on the scenic drive. It was a three hour journey from our base in Bø, all the way up to Andenes on the northern tip of Andøya Island, but it was filled with snowy landscapes and heaps of wildlife encounters. 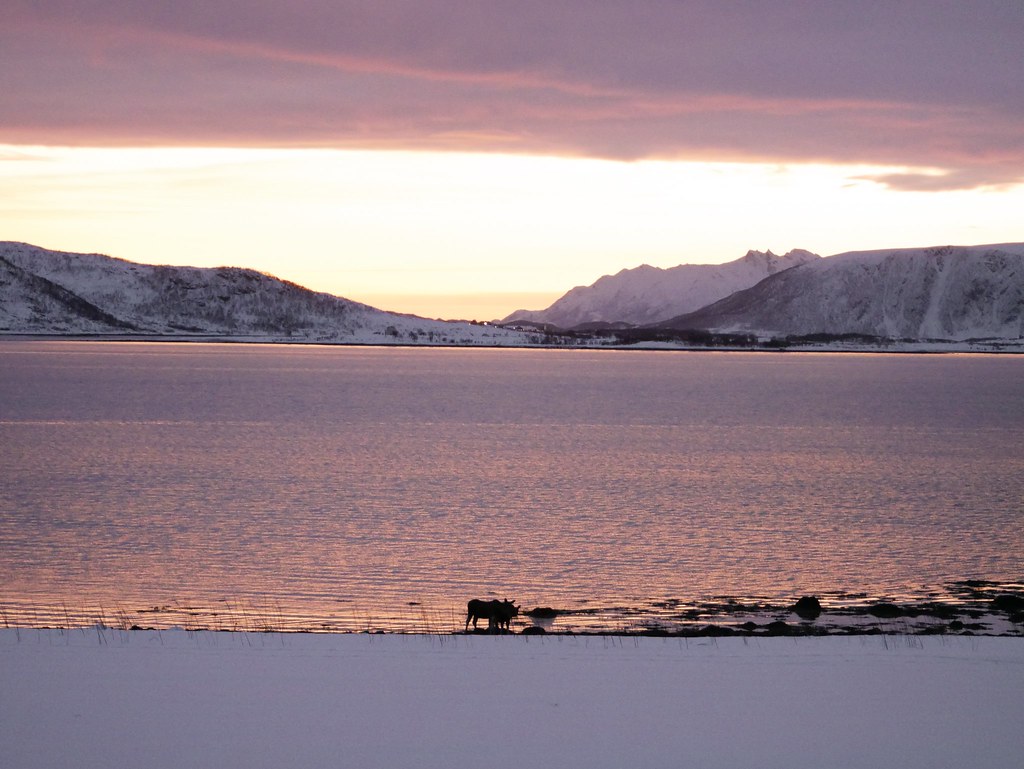 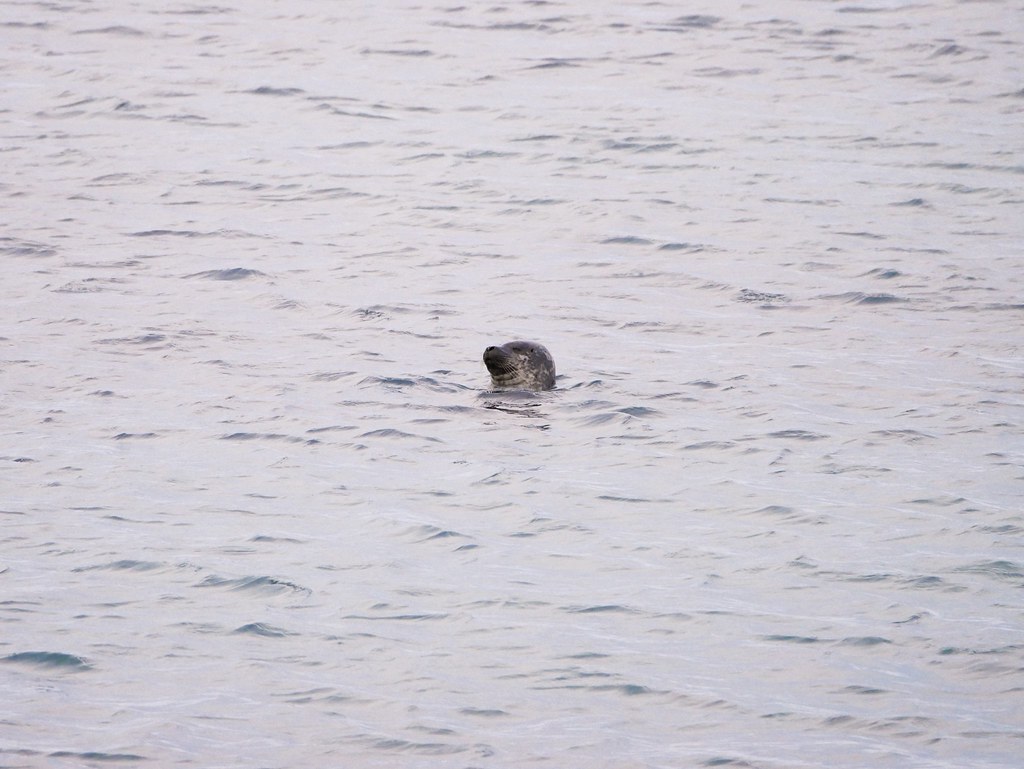 We drove through one section which was teeming with moose so we began counting how many we saw – by the end of the day we’d seen 39 moose and a dozen or so reindeer. There were plenty of female moose with their young, either nibbling bark from the trees beside the road, laying on the ground or running like hooligans with their clumsy legs in the deep snow. Sadly we didn’t have any spare time to stop and photograph them as we didn’t want the guests to be late for the safari so you will just have to take my word for it. 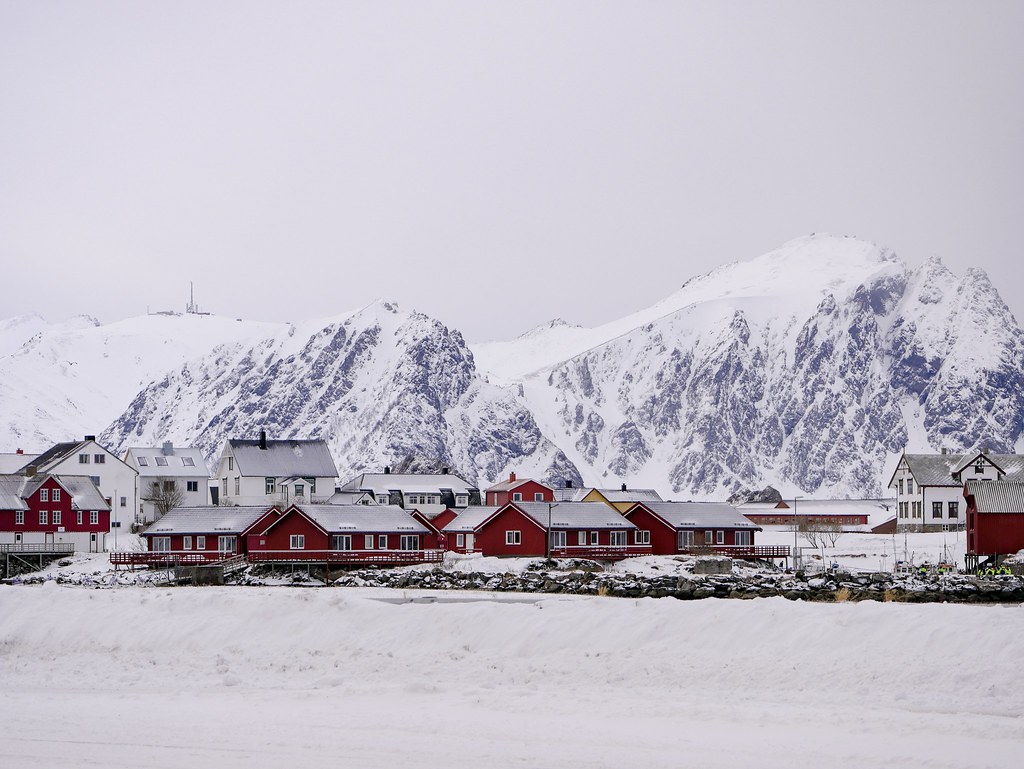 The weather was grey and gloomy when we arrived in Andenes and the cold wind went straight through our bones. It was strange as it was abnormally warm for winter, between 1 – 4 degrees, yet it felt about -15. We dropped the guests off at the whale safari and listened in on the presentation. We actually did this very whale trip back in 2014 when we travelled around Norway in our campervan and we were very lucky to witness 6 gentle giants and some clown-faced puffins. Andenes is one of the best places in the world to see sperm whales as the solitary males come here to feed in the deep waters filled with giant squid. An underwater canyon lies just off the shores of Andenes and the sea drops about 2000m so the sperm whales can use the area to dive for up to an hour into complete darkness. It’s hard to research what happens in such deep water but scientists have discovered that the sperm whales use ultrasonic clicks to suss out prey. The vibrations travel until they reach an object and then they bounce back to the whale who can determine the size. Once the whale suspects prey it uses the ultrasound more intensely to stun the animal, or so they say. The clicks are almost double as loud as a jet engine roaring for take off and some say its dangerous for humans to swim with sperm whales as the ultrasound could stop our heart, but I think that’s a myth.

After our minds were filled with whale facts we left the guests to get on the rib boat while we headed off for a couple of hours on a roadtrip. We decided to go for a drive around the west side of Andøya and the scenery was pretty spectacular. The mountains were sharp like razors and the landscape looked more like Lofoten than Vesterålen with dramatic peaks so close to the sea. We passed numerous stunning beaches with a mix of snow and sand being lapped by perfectly turquoise water and a lone island rose out of the sea in a big point, almost looking like a nearby mountain had its top blown off into the sea. We pulled up for some lunch with a beautiful view and watched the weather quickly change around us as the dark clouds grew closer. A local family walked by with an enthusiastic dog pulling along a kick sled and a small child sat on the seat who was thoroughly enjoying the ride. It was the quintessential image of a Norwegian family in winter. 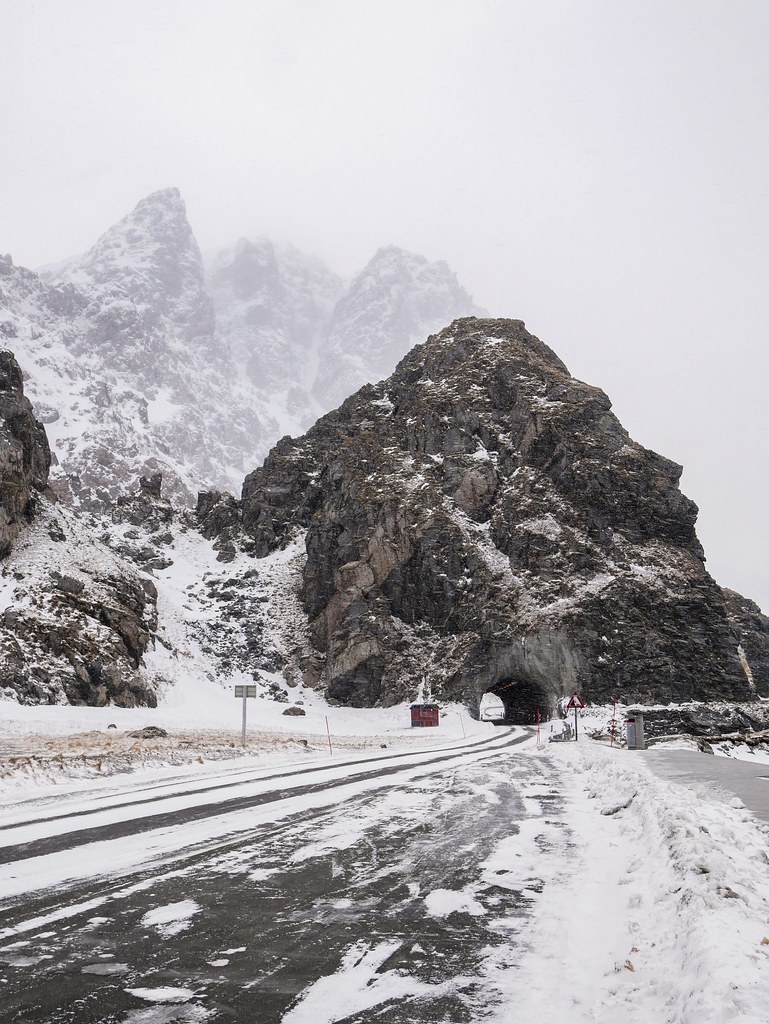 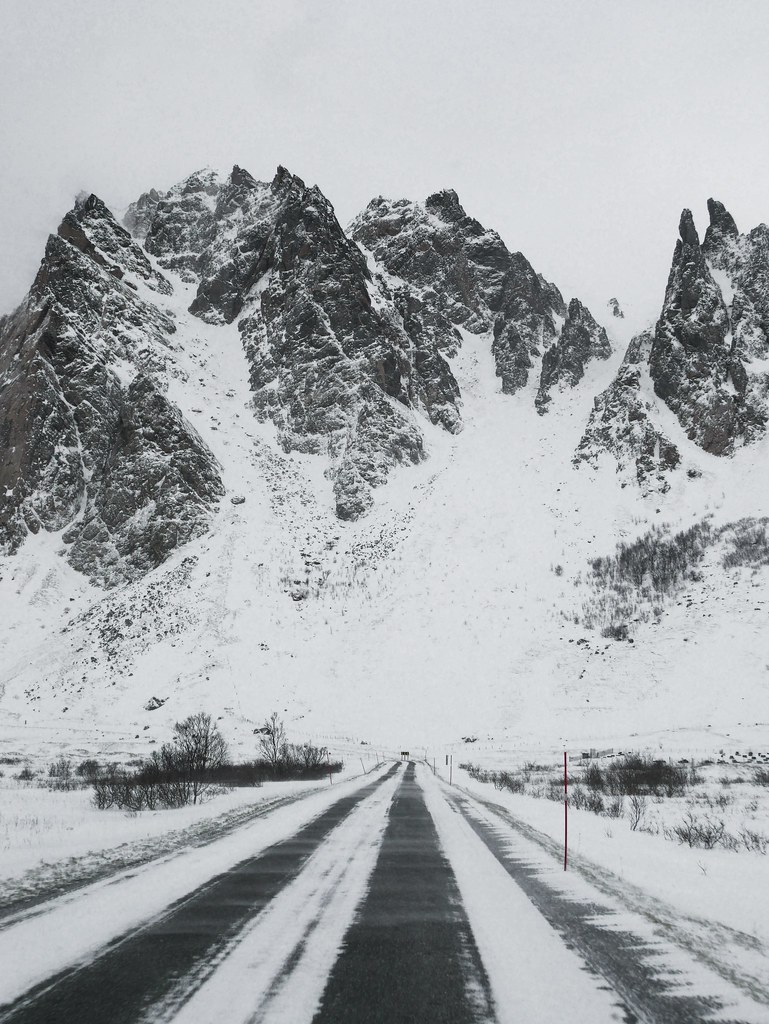 We planned on doing a short walk but the wind chill was brutal so instead we drove along the coastline and sussed out some nice locations to take the guests on our drive back. The weather quickly turned bad though and we ended up driving through a snow storm. The scenery changed too as we went slightly inland through a marshy section but it was just a vast flat area covered in snow. Because it was so flat there was nothing to stop the snow blowing across the road so we had to navigate around snow-drifts and the odd truck that zoomed past and blew up all the fresh powder. 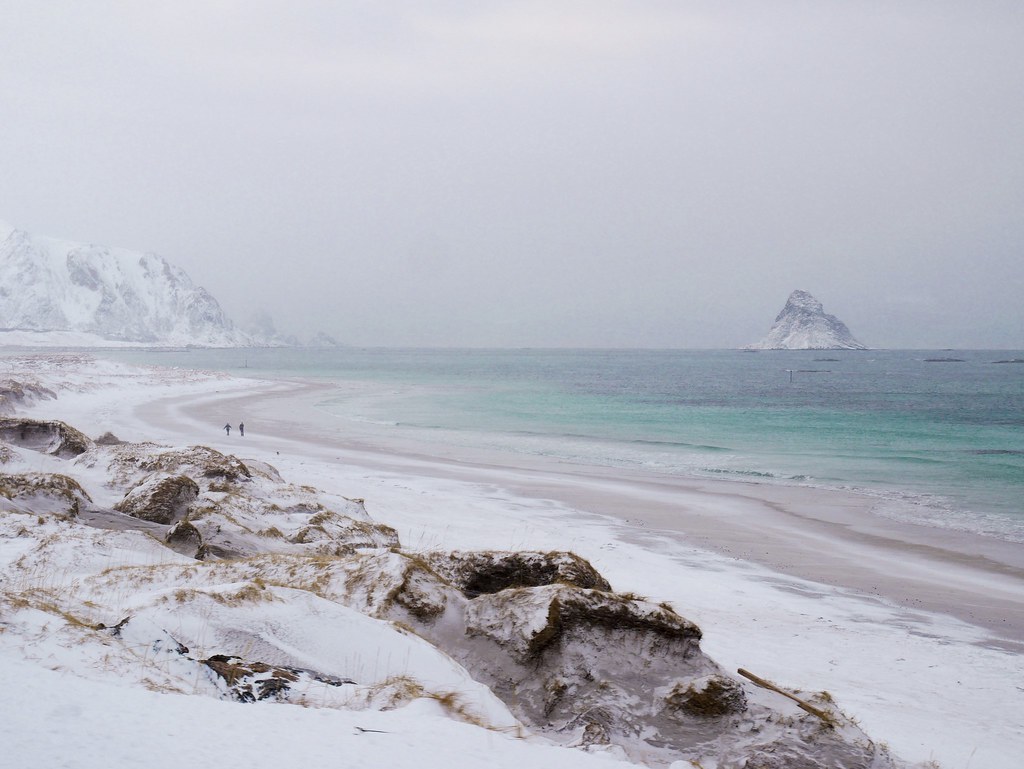 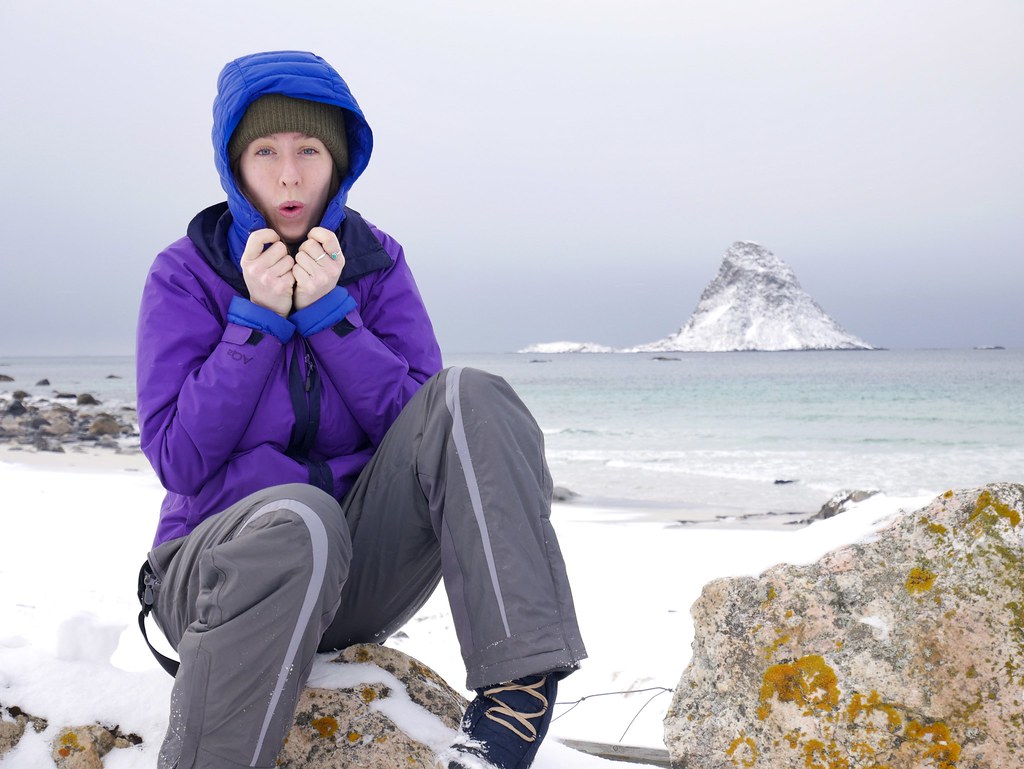 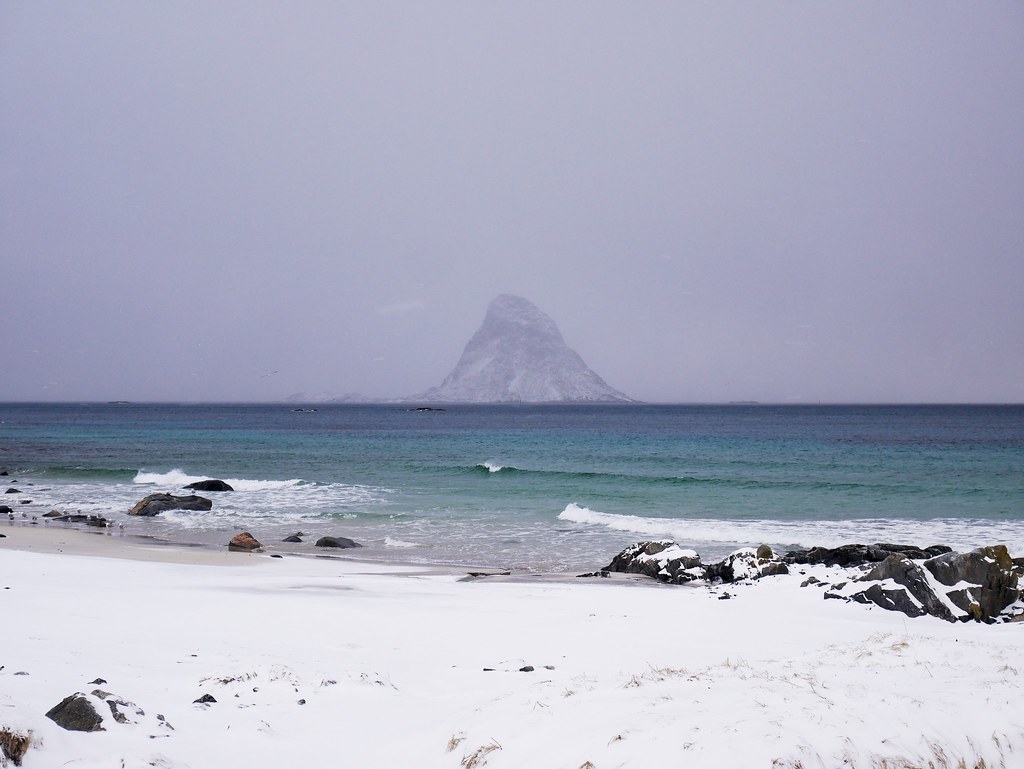 We were worried the scenic tour with the guests would be a complete flop due to the bad weather but thankfully things perked up when we collected them and the skies began to clear. The landscape looked completely different in the sunshine, the snowy peaks were glowing and the beaches looked inviting. Seagulls swarmed around fishing boats and they lit up in the sun like specks of glitter. The highlight of the drive back was when we stopped at a sweet lighthouse atop a hill. The sun was setting and the light was incredible so we ran through the snow to capture it. The mountains were glowing orange and the horizon looked like it was on fire. 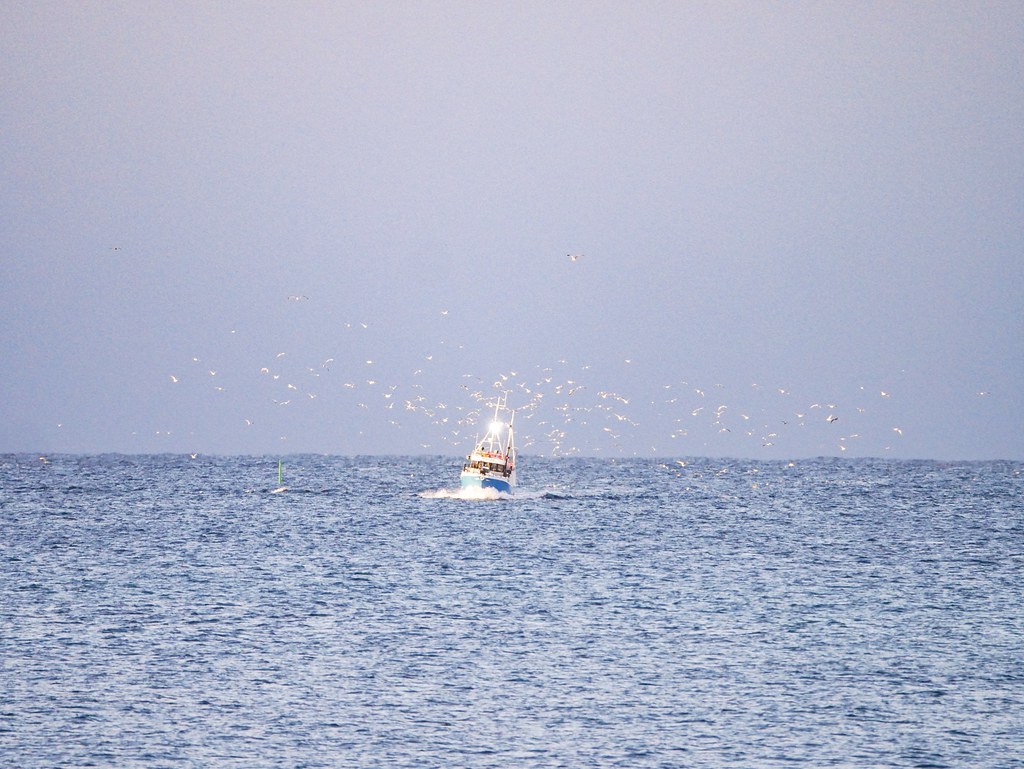 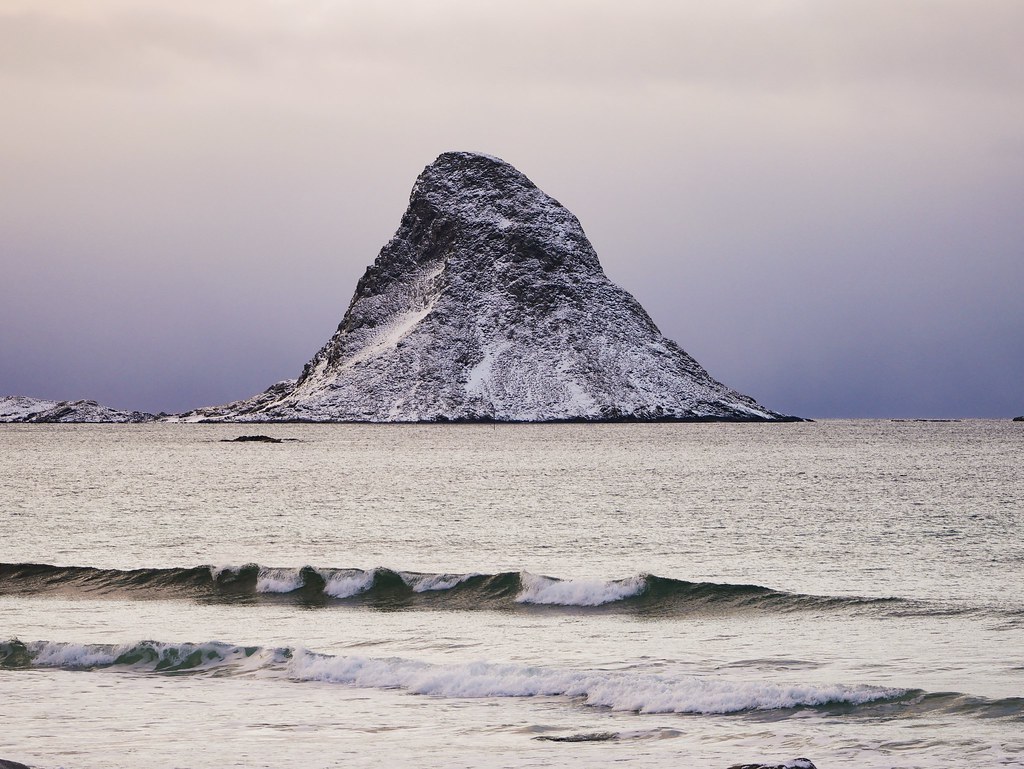 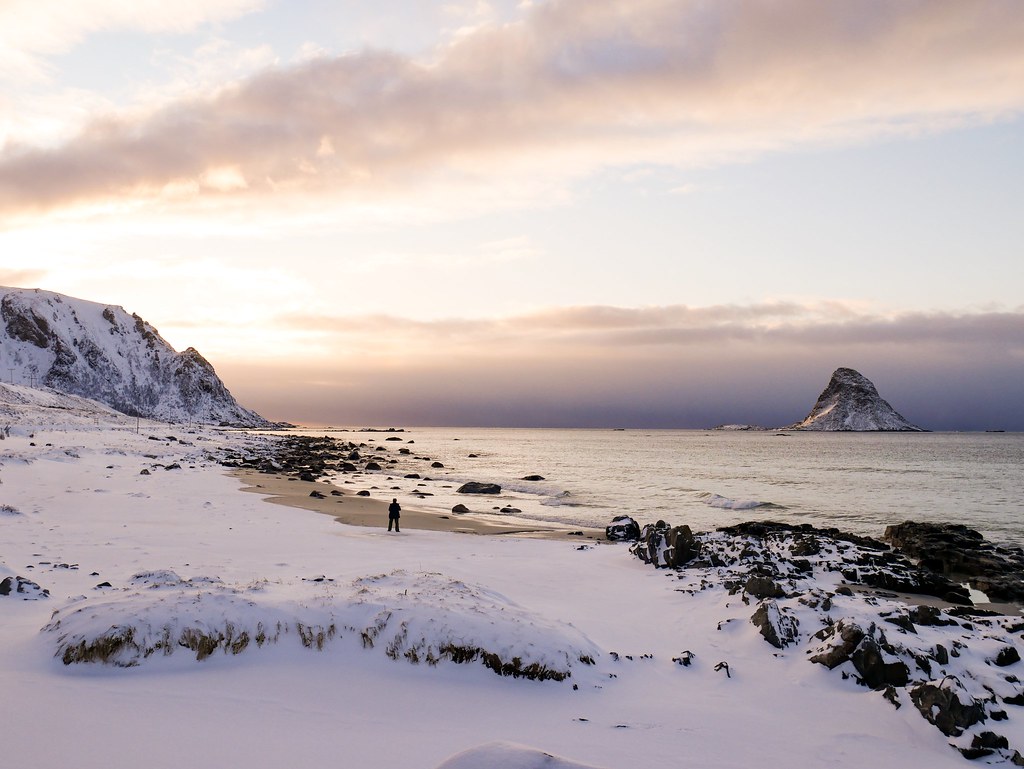 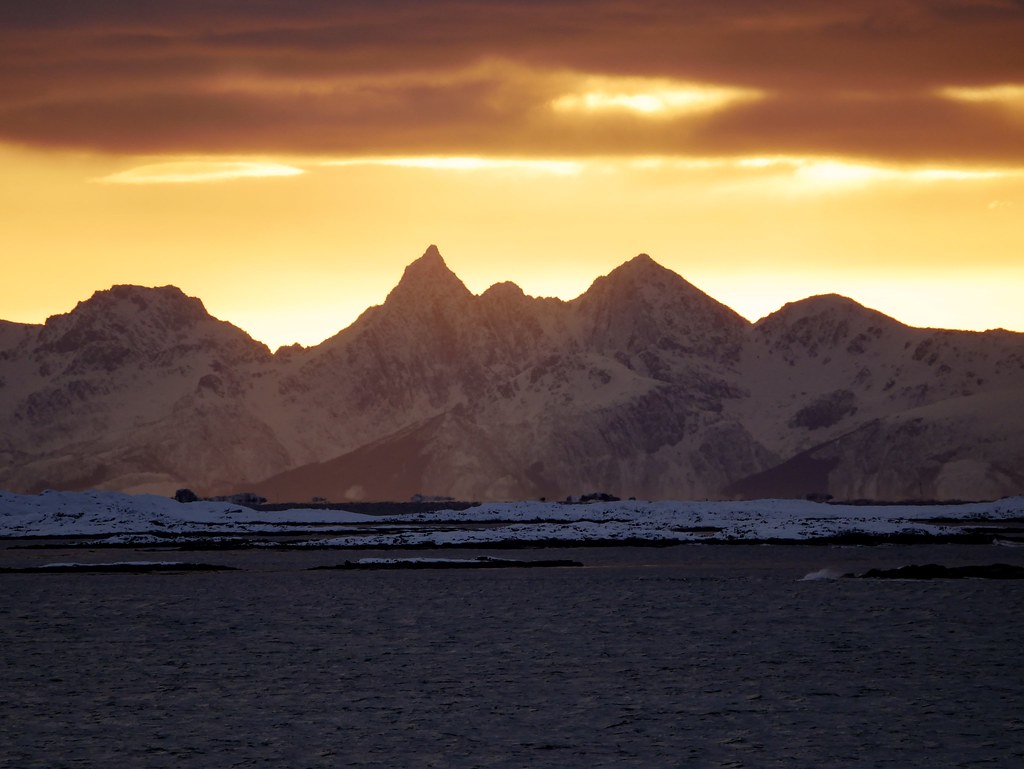 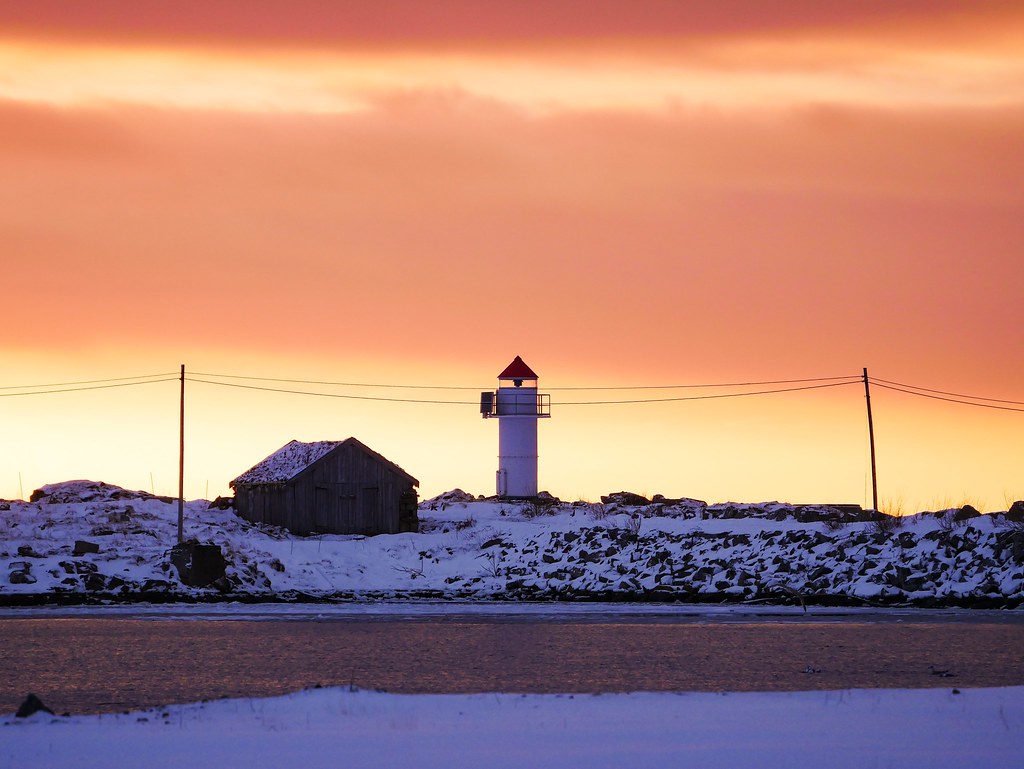 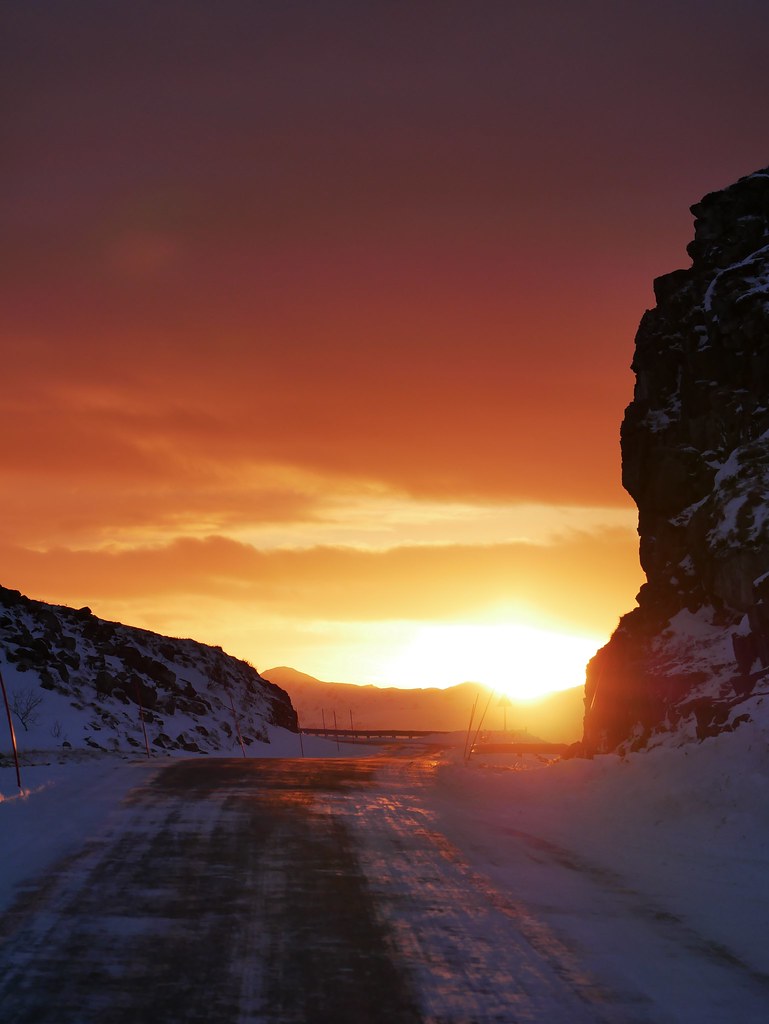 Once the sun had set we quickly lost the light but still managed to spot half a dozen of so moose, some reindeer and a lone seal resting on a rock barely big enough for its body. It was really nice to explore a new area but I was exhausted from the 11 hour journey, and I wasn’t even doing the driving! 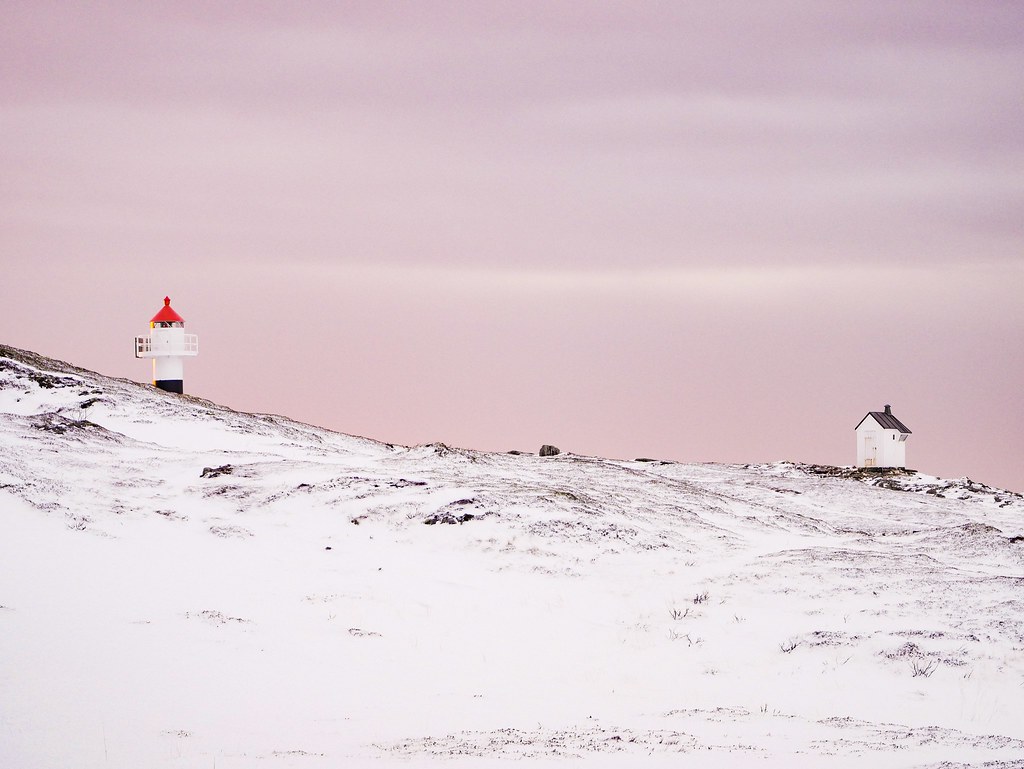 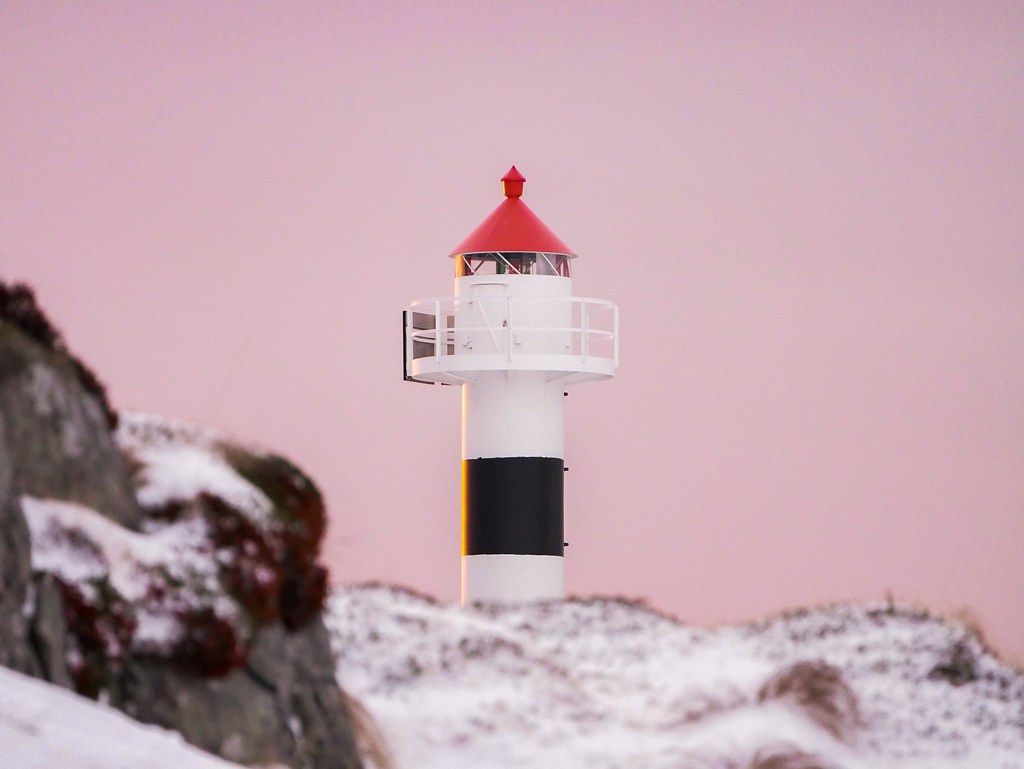 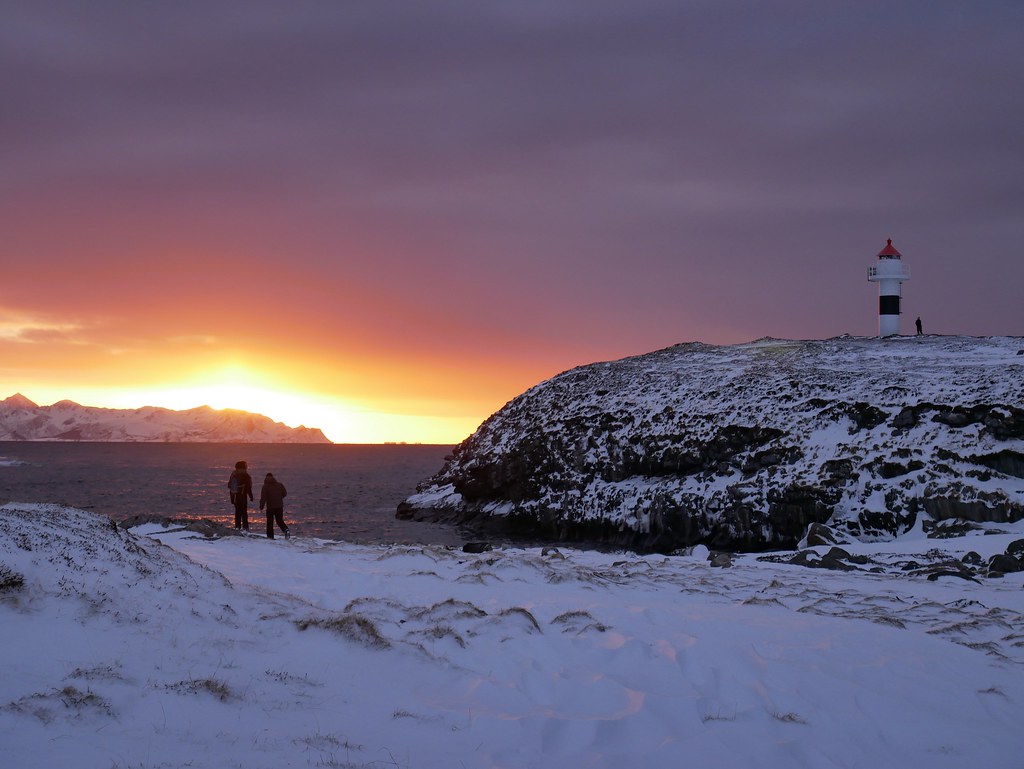 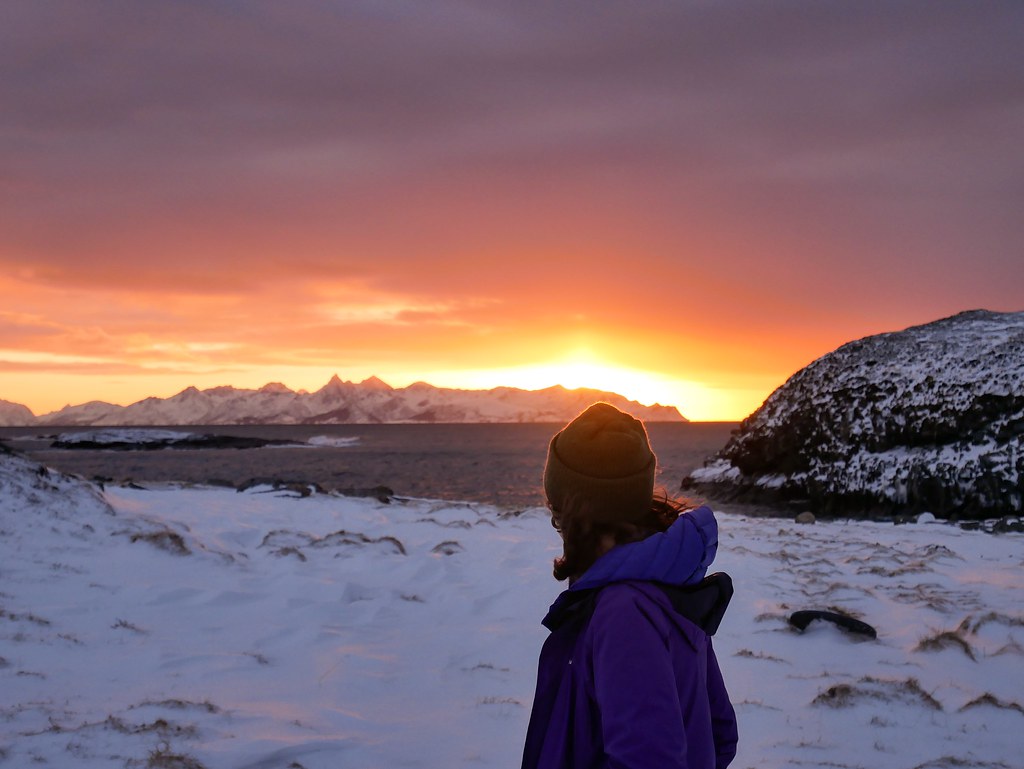