There’s something very special and yet very creepy about exploring the ancient temples of Bagan at sunrise. It’s eerily dark and quiet outside with just the sound of bats wings flapping over your head and the scurrying of rodents on the stone floors as you walk inside the temples. Narrow stairways lead up to the unknown where you sit waiting for the sun to pierce above the horizon. Then the birds arise, filling the air with tweets and songs and slowly you see you’re surrounded by temples as you sit under a pink sky. 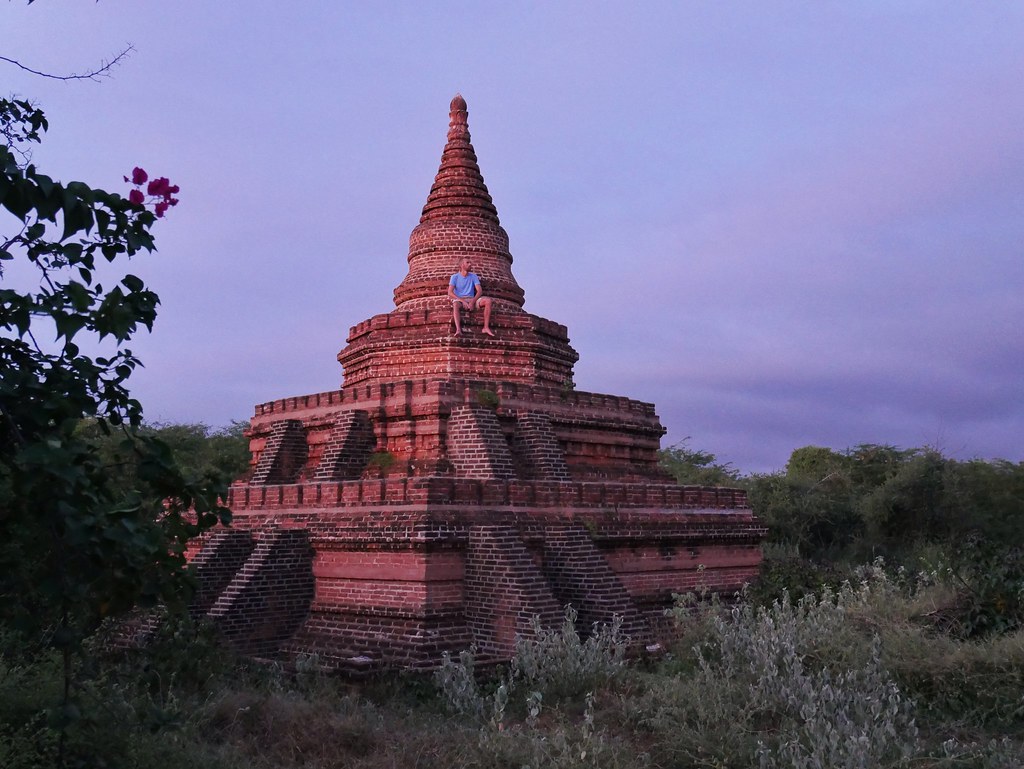 The best way to get around Bagan and see the hundreds of temples and pagodas dotted across the landscape is by e-bike and luckily they cost peanuts, just $3 (4500 kyat) per day. Like most people in Bagan we wanted to see the sunrise so we had to wake up at 4:30am and collect our fully charged bike. We turned off the main road, away from the street lights and onto dusty tracks with just our bike light leading the way. It was a lovely, peaceful drive on the battery powered bike as it was totally silent. 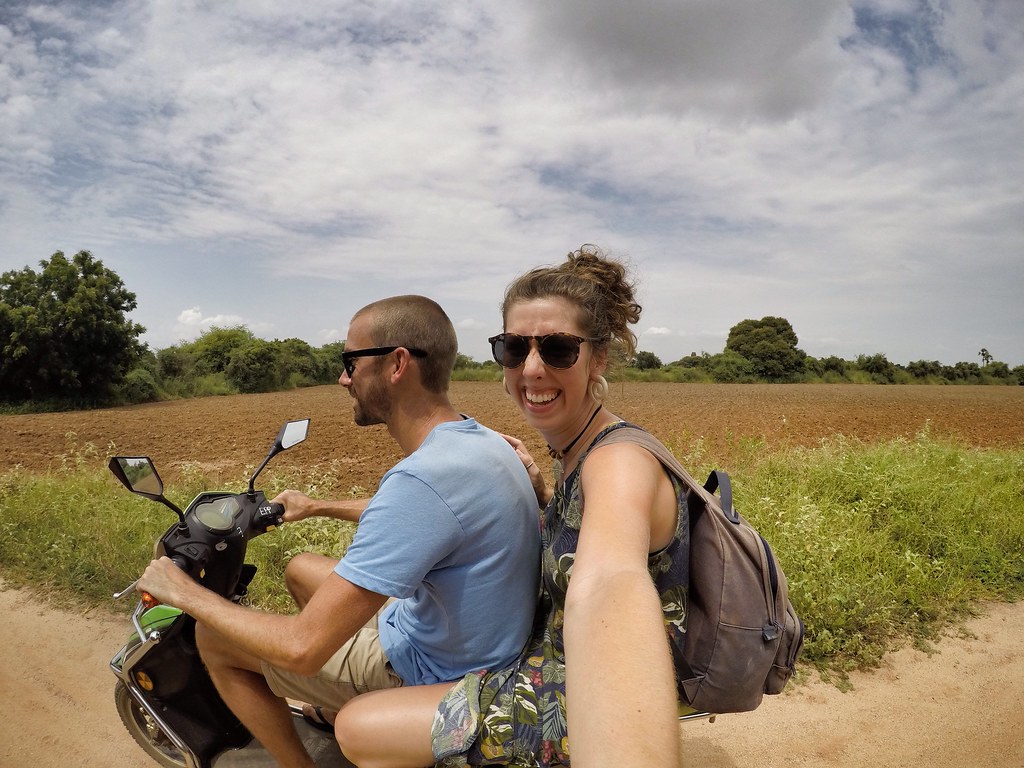 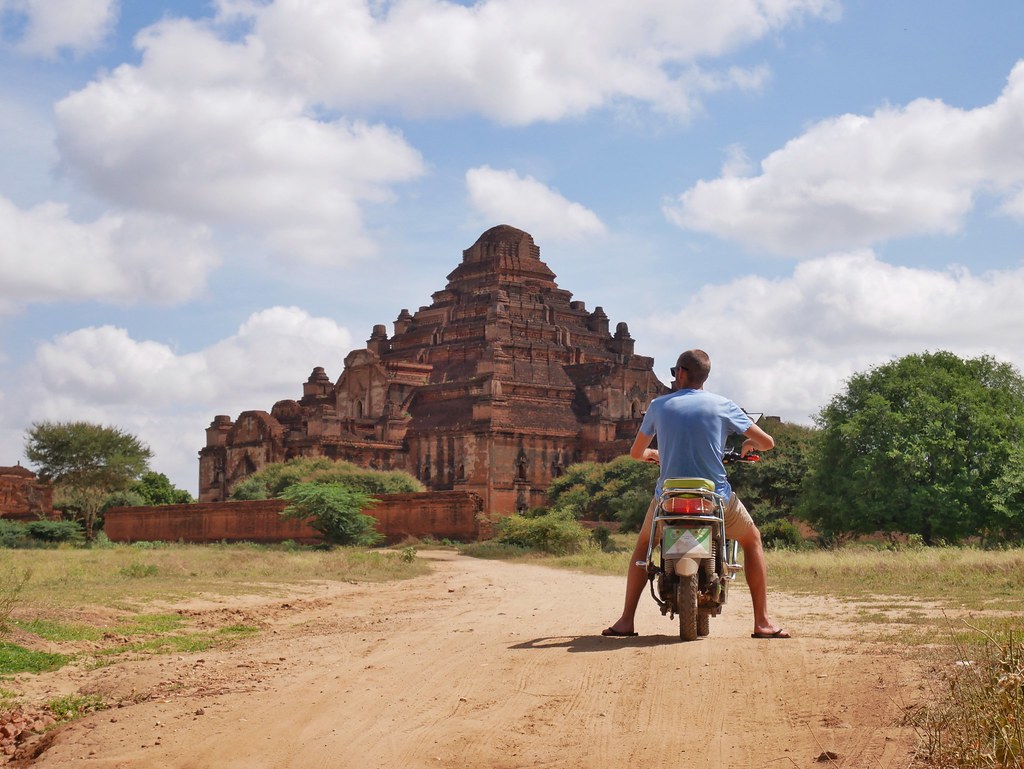 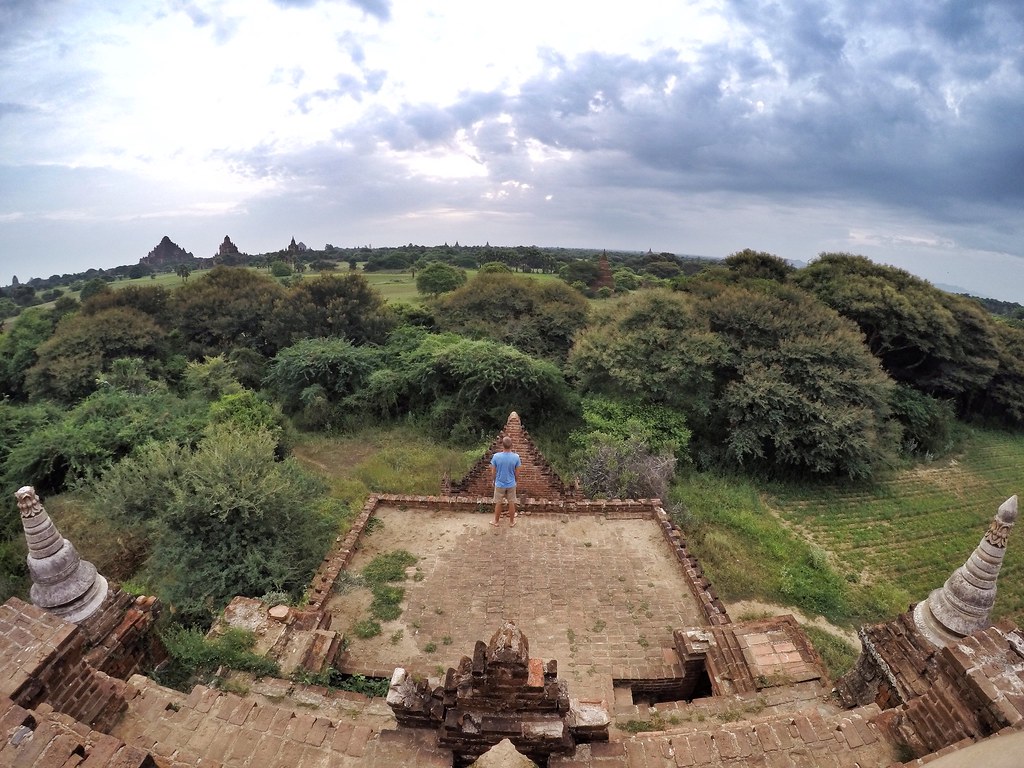 We had no idea where to go though. Up until 2018 you were able to access the roofs of many temples but they’ve clamped down on it, which I totally get. There are 2200 temples built between the 9th and 13th centuries and it can’t be good to have people walking around the tops of them. But I did hear that they’ve closed them to encourage people to climb a ghastly manmade viewing tower charging $5 a head. Anyway, the temples are why people come here, and viewing the sunrise from a tower or even specific viewing mounds where dirt is piled into small hills just doesn’t have the same appeal. Luckily they haven’t closed all the temples, you just have to be in the know about which ones are still accessible or pay a local to show you. I think it’s a good compromise, just keeping a select few open and preserving the others. 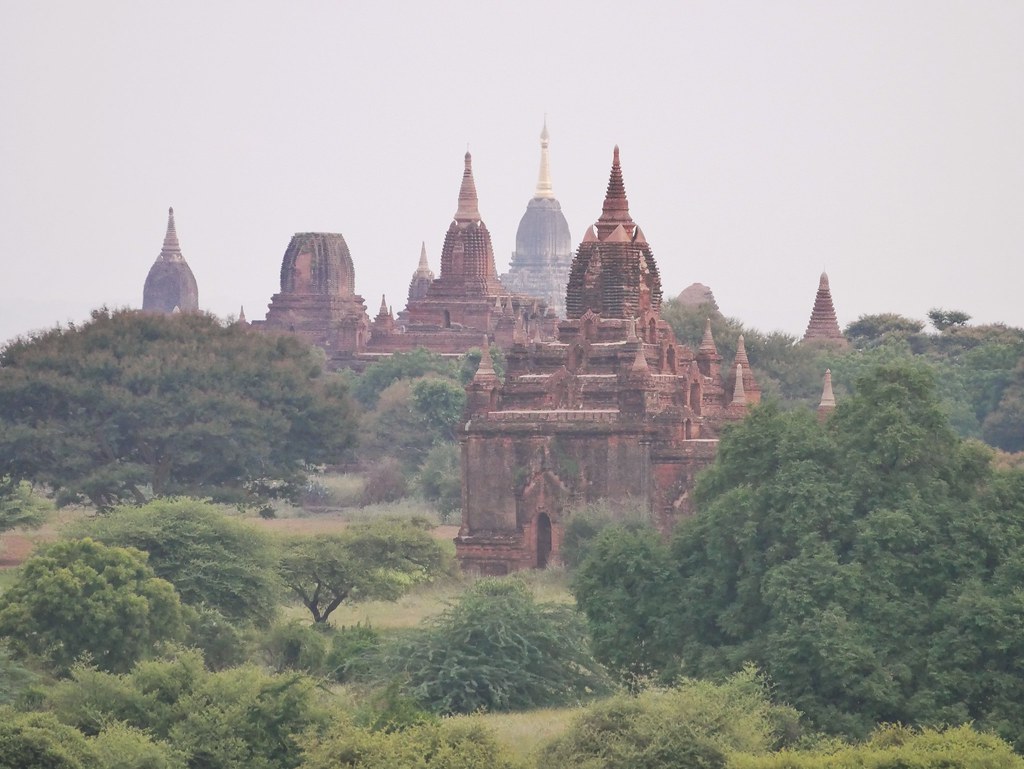 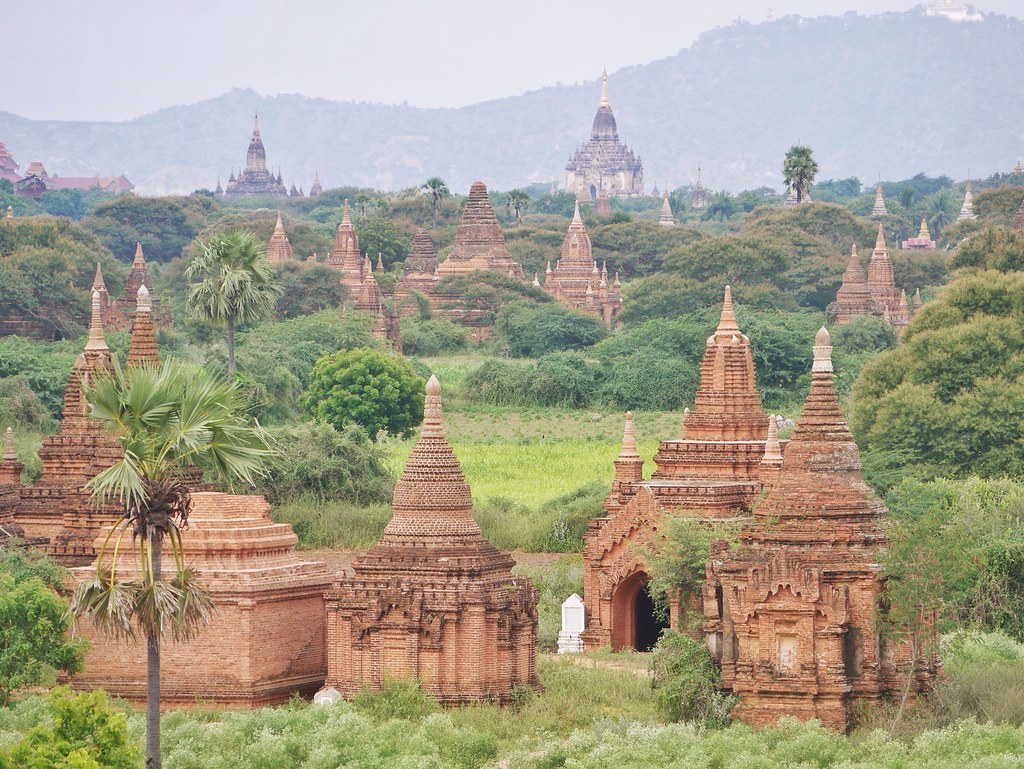 We whizzed through the darkness and arrived at a temple we thought was open. We quietly dismounted the bike and then it let off the loudest ‘beep beep’ to ensure anyone in a two mile radius knew we were there. With head torches on we headed to the entrance and as I stepped forward a dozen or so bats flew over my head. I didn’t know what to expect as I stepped inside, certainly not a giant buddha statue staring at me. On each side of the dark stone room were discreet stairways. I confidently climbed up one and at the top was a locked gate. It was a no-go so we dashed off in search of our next opportunity. The sky was becoming lighter and we were running out of time, so when a young boy who didn’t look old enough to ride a motorbike drove up alongside us we took him up on the offer to show us a roof top we could climb in return for a tip. 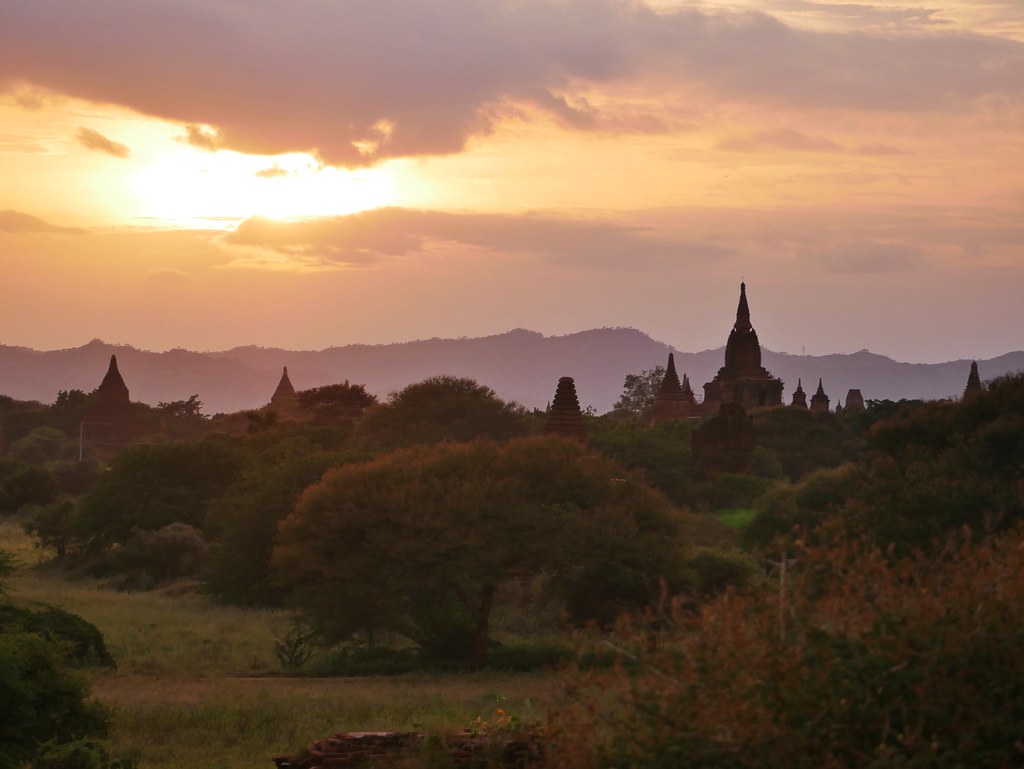 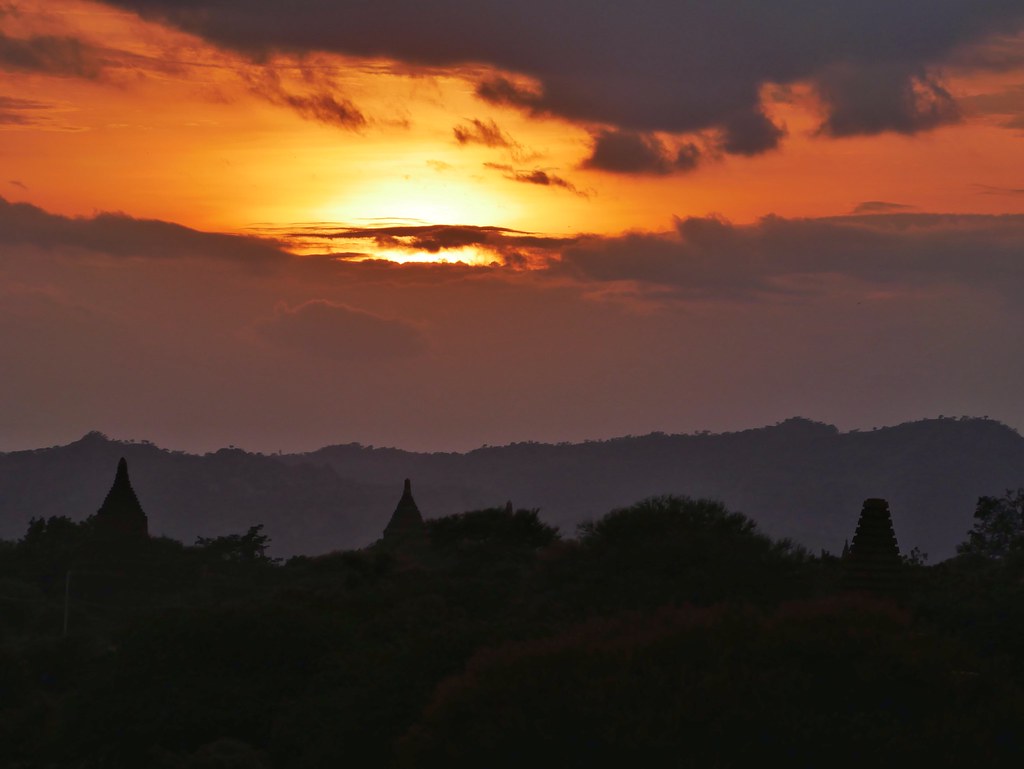 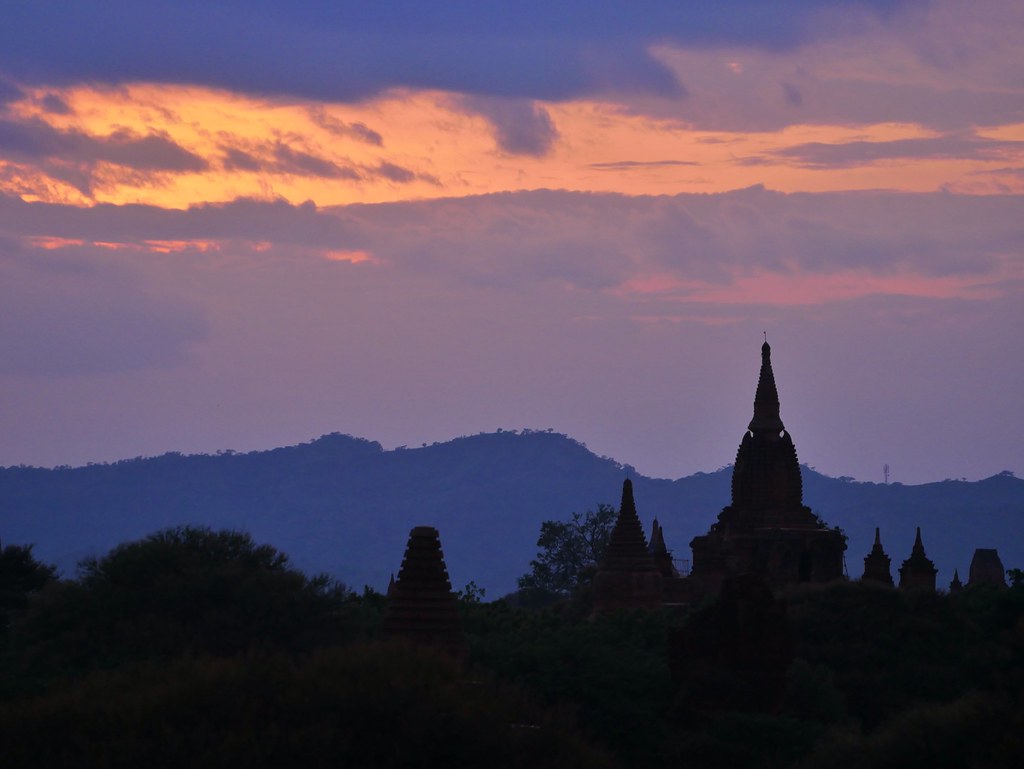 He zoomed off ahead while we precariously shuffled the bike through sandy patches where we wobbled from side to side. Craig’s normally very good at driving a motorbike but the e-bike was very unstable and I told him that he wasn’t filling me with confidence, to which he replied “me neither, I wouldn’t trust me on this bike!”. Our little helper pointed out one temple that was good for sunset and nearby was the sunrise temple, literally named that. Sadly we weren’t the only ones to be shown this temple and about a dozen other e-bikes and a couple of tuk tuks were already there. The sun had already risen a minute before we arrived but it didn’t add any colour to the cloudy sky so we didn’t miss much. The roof area had a flat sort of terrace and then a tiered roof where people were sat in layers up to the top. A tree next to the temple had yellow-headed birds making the most incredible hanging nests with tunnel entrances. 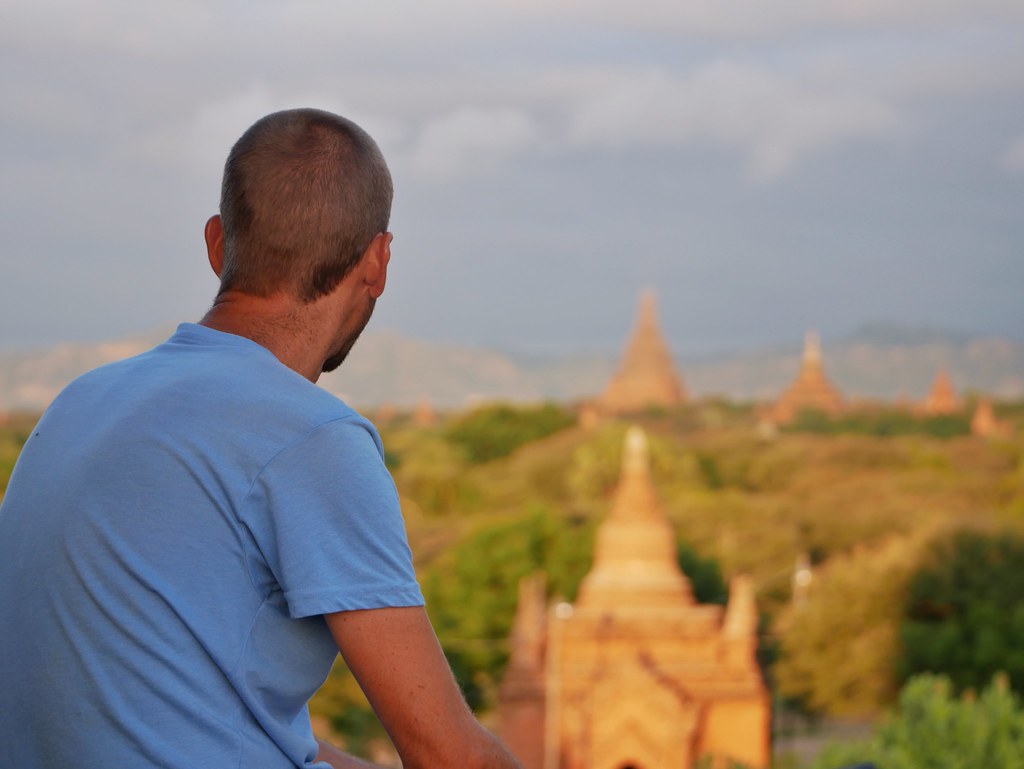 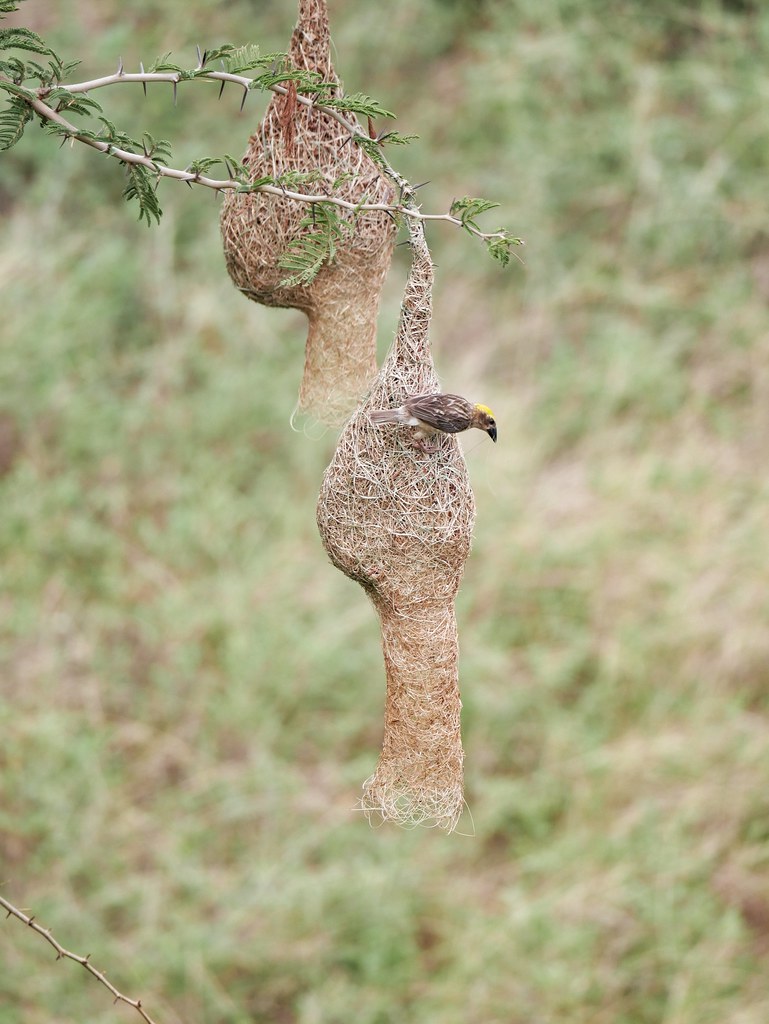 After the poor show from Mother Nature we went back to our hotel for a delicious breakfast and then continued the days explorations. It was a really fun place to just ride around and get lost. We passed some local farmers plowing a field with the help of two bullocks and a wagon. One very old man with little wooden flip flops pointed to the pagoda next to his crops. We headed in expecting to find a hidden gem that hardly anyone knew about, a temple whose roof we could access and have the view to ourself. But as soon as I looked up the steps I saw a gate and came back down. The old man looked confused and pointed for us to go up, he didn’t speak any English so we shone our torch up for him to see and he was baffled that there was a gate there. I guess he hadn’t climbed up in awhile. 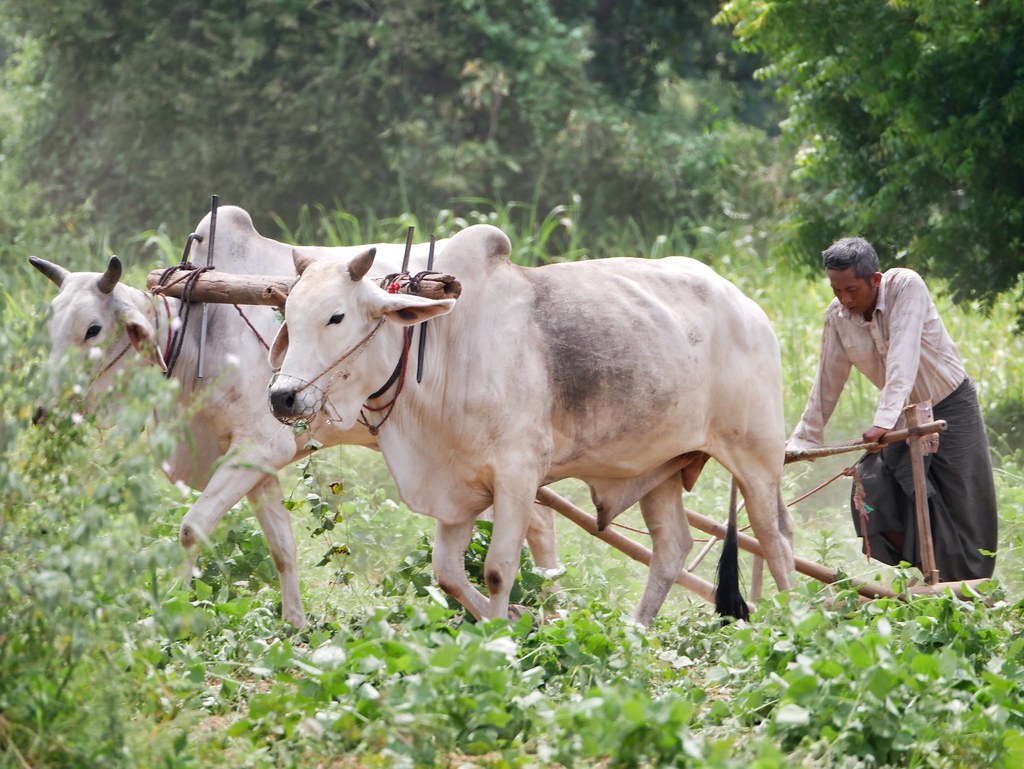 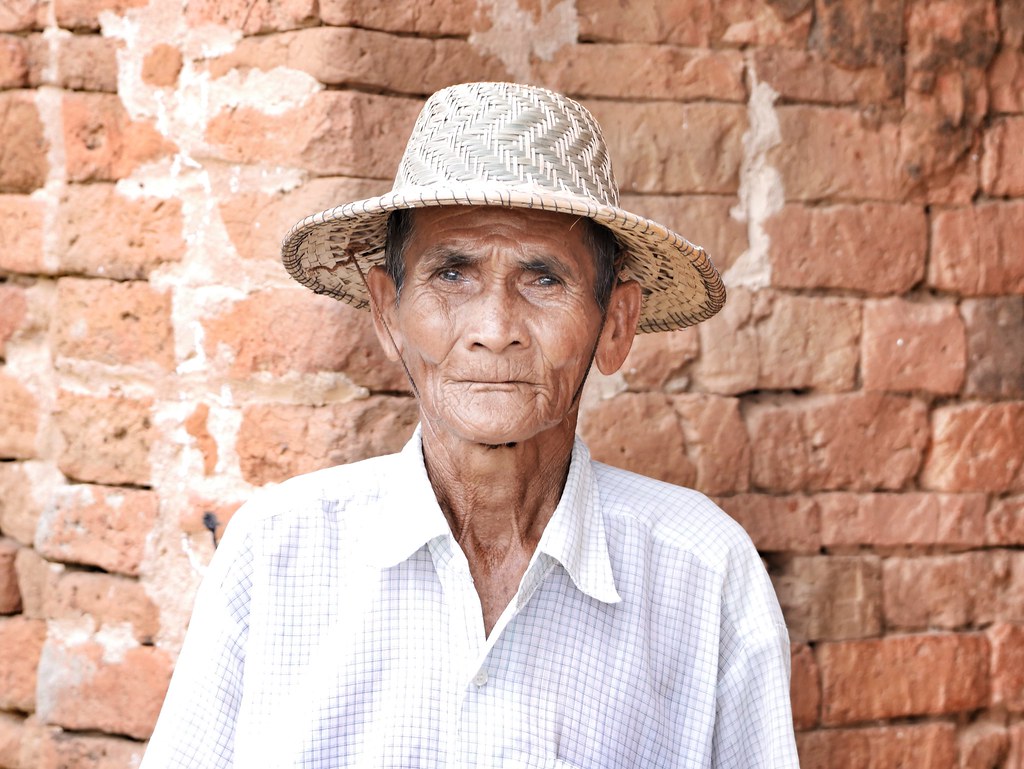 Most of the temples were the red stone variety, some small and humble while others were massive buildings with fancy detailing. Then there were a few main temples to visit which were very grand. Old paintings were still visible on the vintage stained walls. The temples all had tall ceilings and one of them had a particularly bad infestation of bats. As I’ve said before, with all Buddhist sites shoes and socks need to be removed so if you visit Bagan, wear flip flops for ease of constantly removing them and prepare to get filthy feet. The bats were hanging from the ceiling maybe 50m above us and the floor was wet with bat piss and poo. It was horrible and it even smelt bad. The temples housed snakes too and a couple of tourists even warned us that they’d just seen one slither past our parked bike. But the worst was when we revisited the first temple we went to to double check the gate wasn’t open. When Craig came back down the steps he was face to face with a large snake skin hanging out of a hole. I’d obliviously walked right past it when I sleepily checked the gate at sunrise. 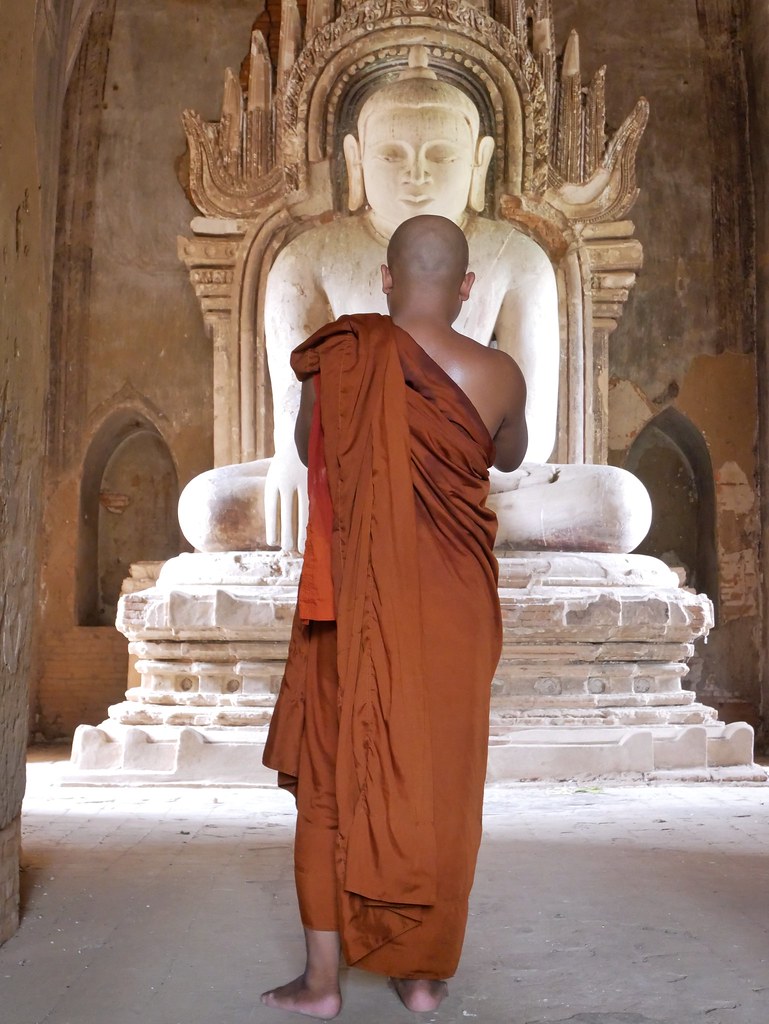 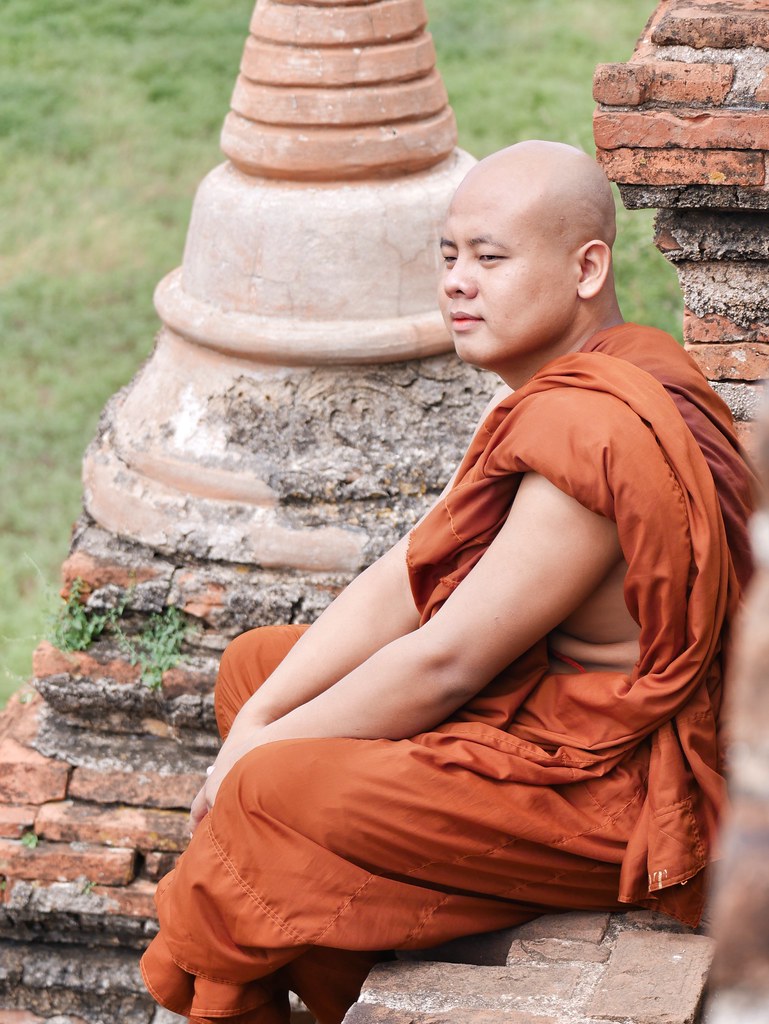 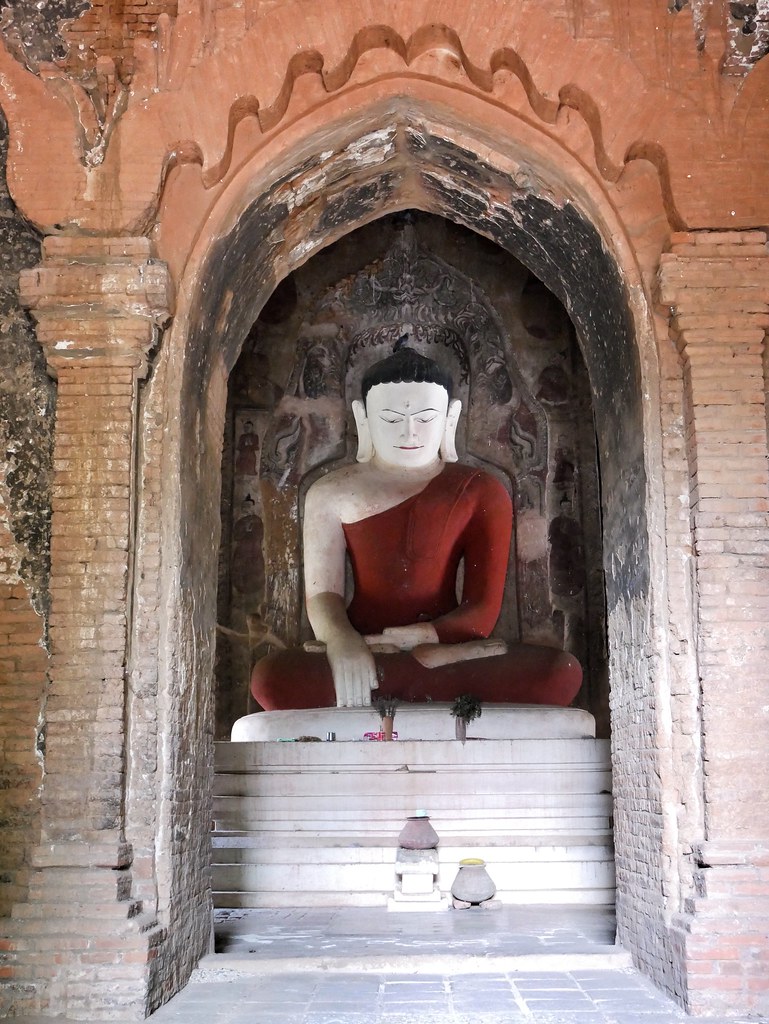 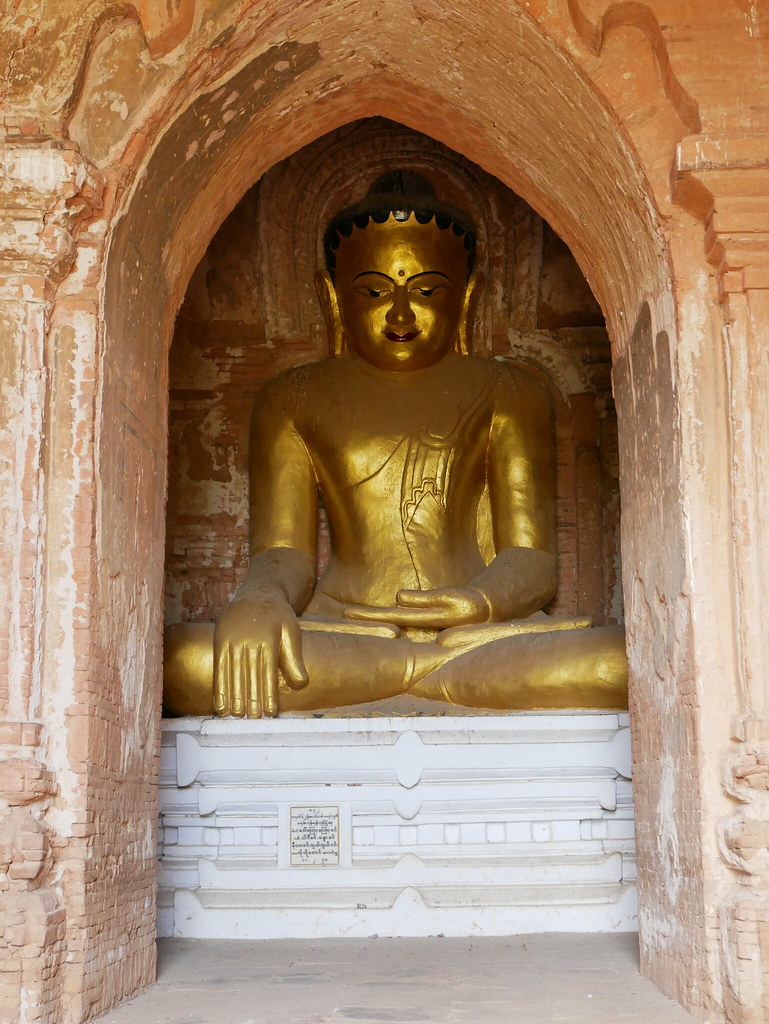 Bees also called the temples home and Craig found out the hard way. As we explored the roof of one pagoda Craig went around the circumference where you need to crouch through sort of turrets and under the turrets were bees nests. They weren’t the sort of sweet yellow and black ones but instead were small brownish ones and my god they attacked Craig like a bunch of missiles. He ran around the building saying he’d been attacked by bees and all I could do was laugh. He hates all insects and I’m always the one that has to kill cockroaches, spiders etc as he squeals like a girl. So I thought he was just being a whimp and I laughed some more as he awkwardly darted through the next turret to reach the exit. I felt pretty bad afterwards as he had genuinely been stung by three bees and his back had the swollen patches to prove it. 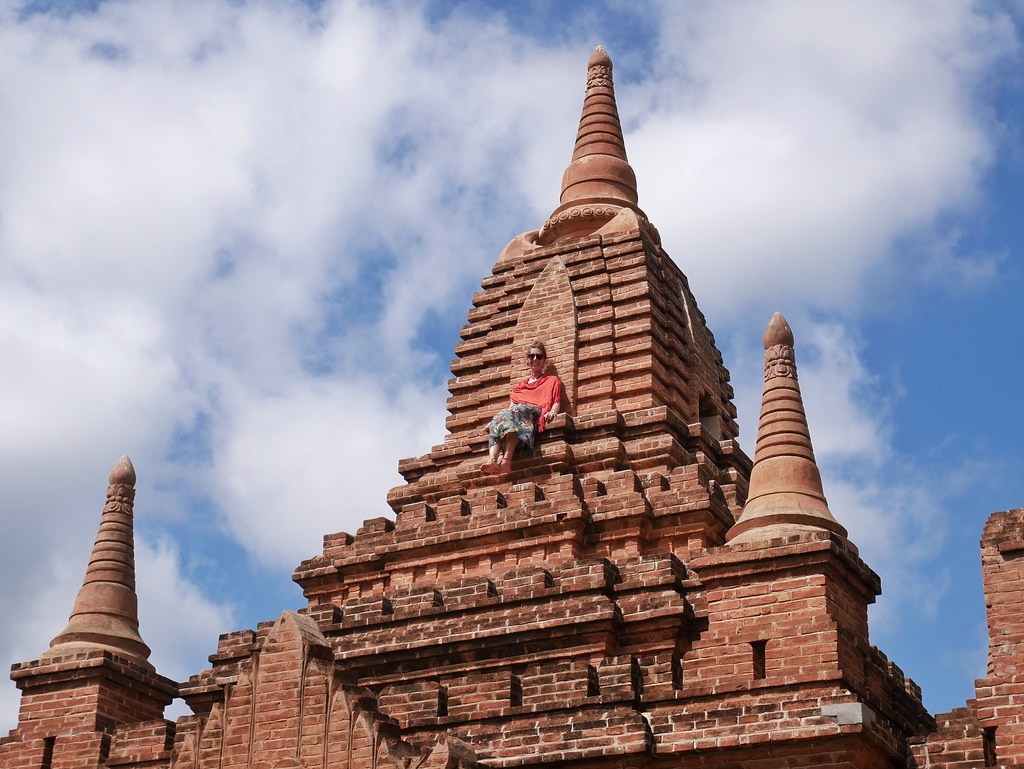 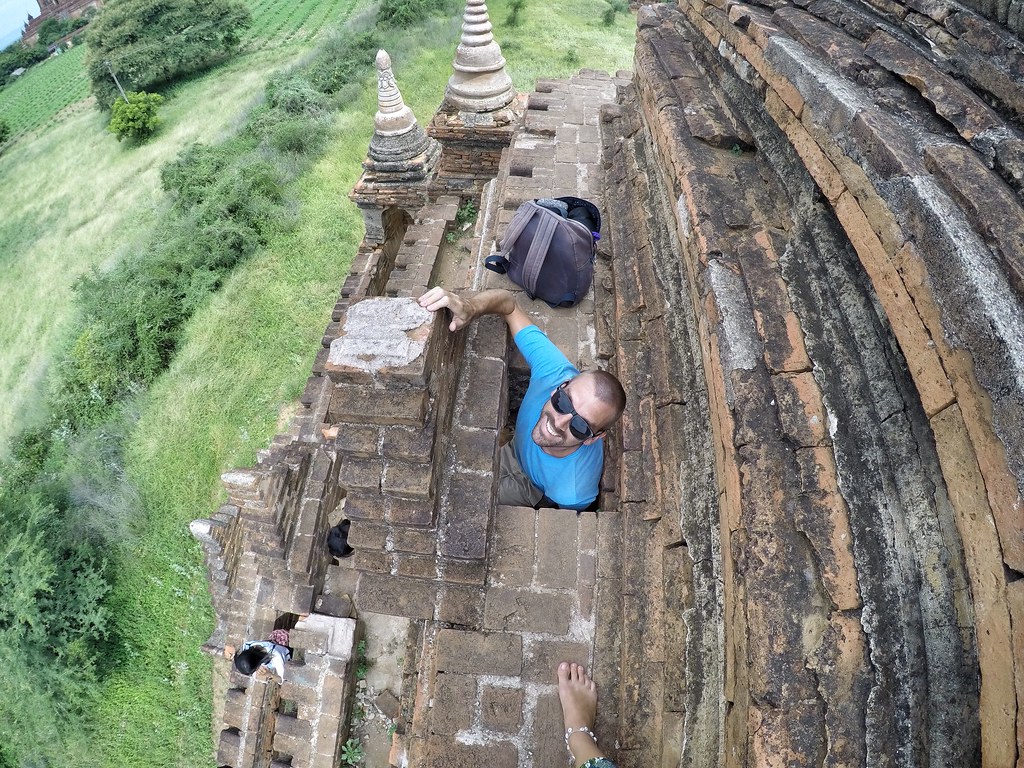 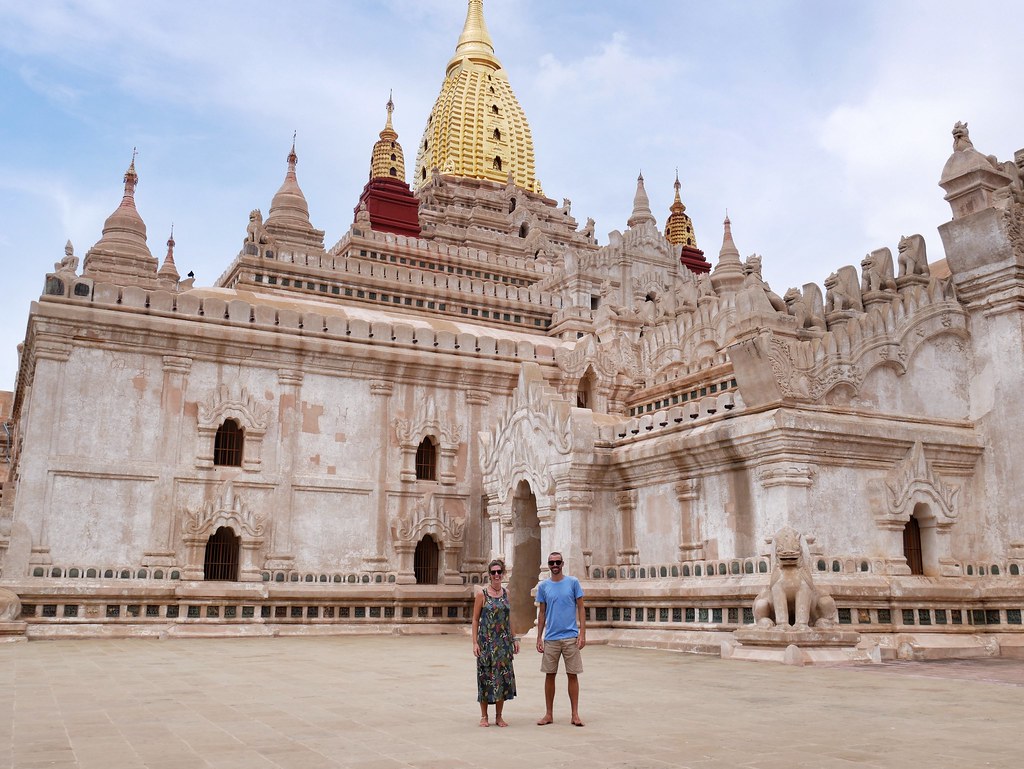 We ended up finding a cluster of pagodas with access up the top of three of them so we returned there for sunset and the best sunrise we had in Bagan. The access wasn’t easy though and they were more like stupas as they had no inside to them. ‘Steps’ led up the outside of the building but they were built for babies feet. Each step was about 1-2 inches wide so we had to tread very carefully. Another temple was being renovated and had handmade bamboo steps leading up which were a little nerve-wracking to climb with two feet between each step. 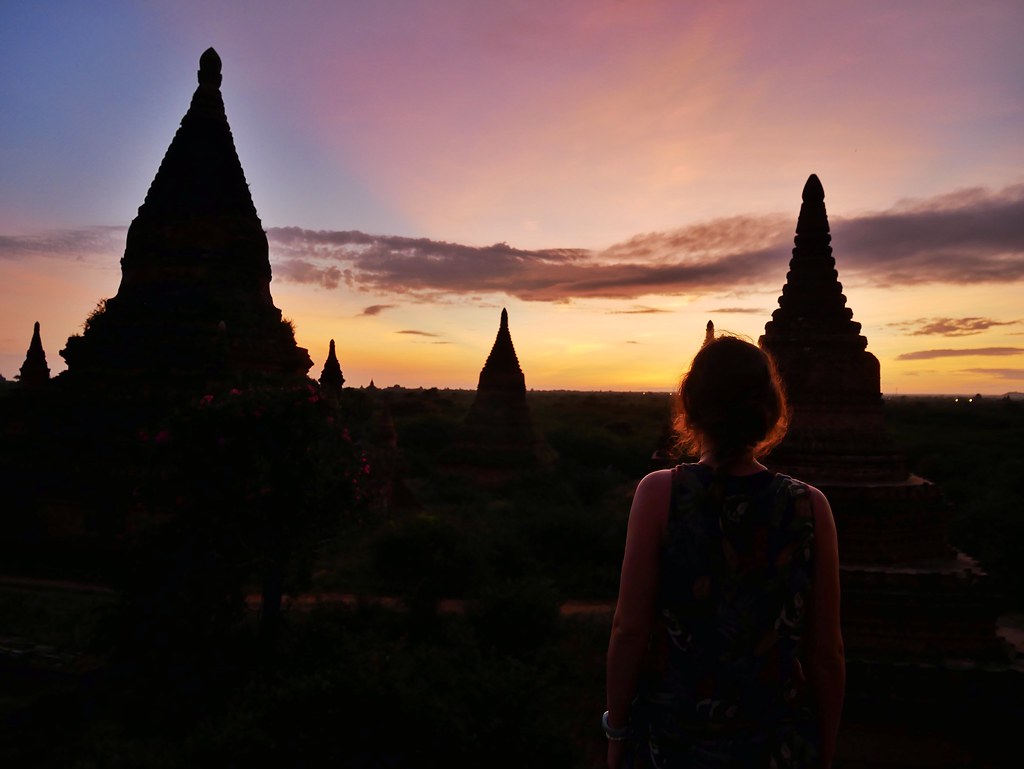 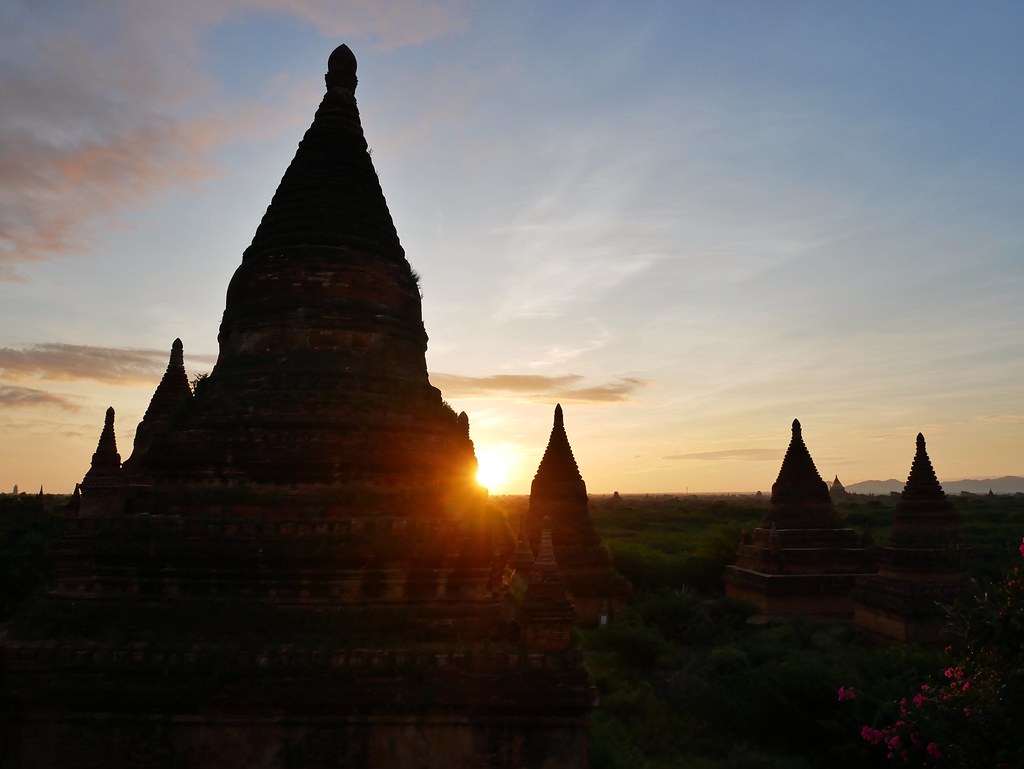 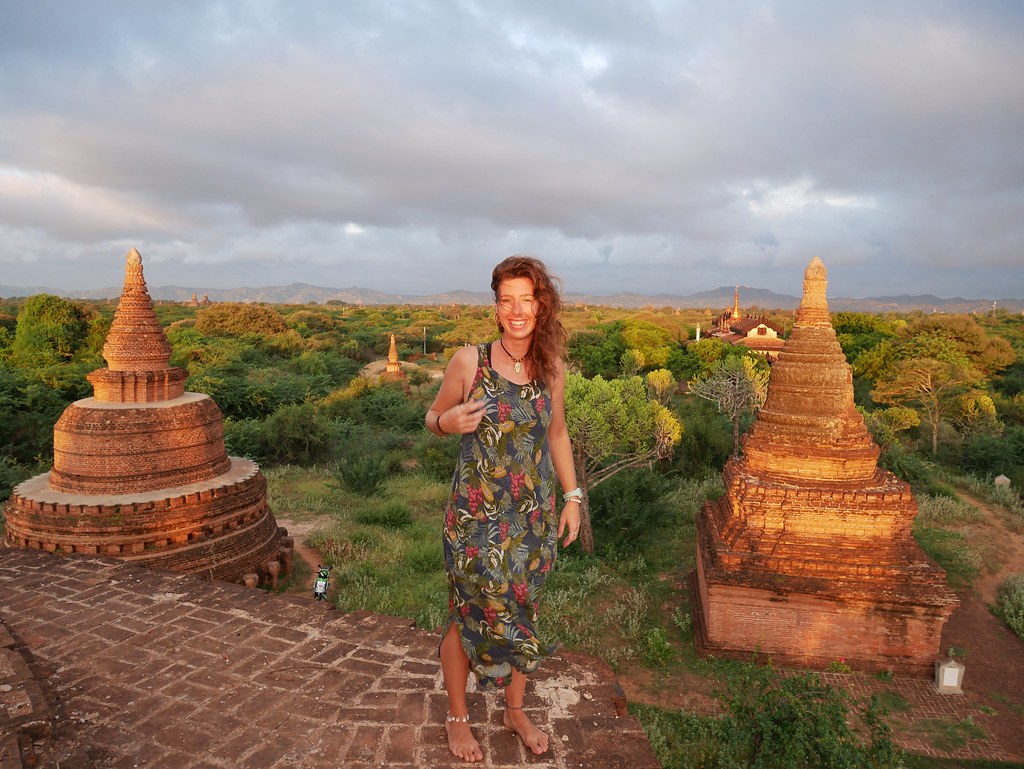 You really needed an adventurous attitude for the area though, the temple stairways were uneven and dark even in daylight hours and the ceilings were low enough to scrape our backs as we headed up. Other temples had teeny-tiny holes at the top of the steps, just big enough for a small human to squeeze through. We ended up finding about 10 accessible roofs around Bagan with the help of Maps.me app and locals. It was a really fun place for exploring and always exciting to wait atop a temple for the sun to rise or set. 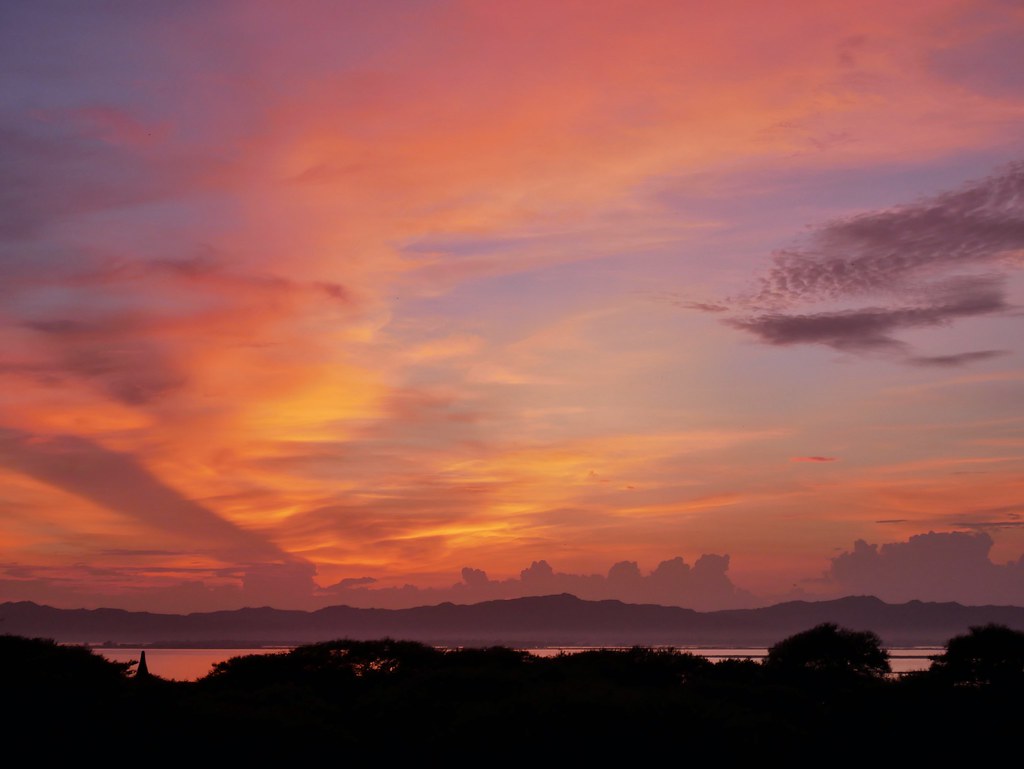 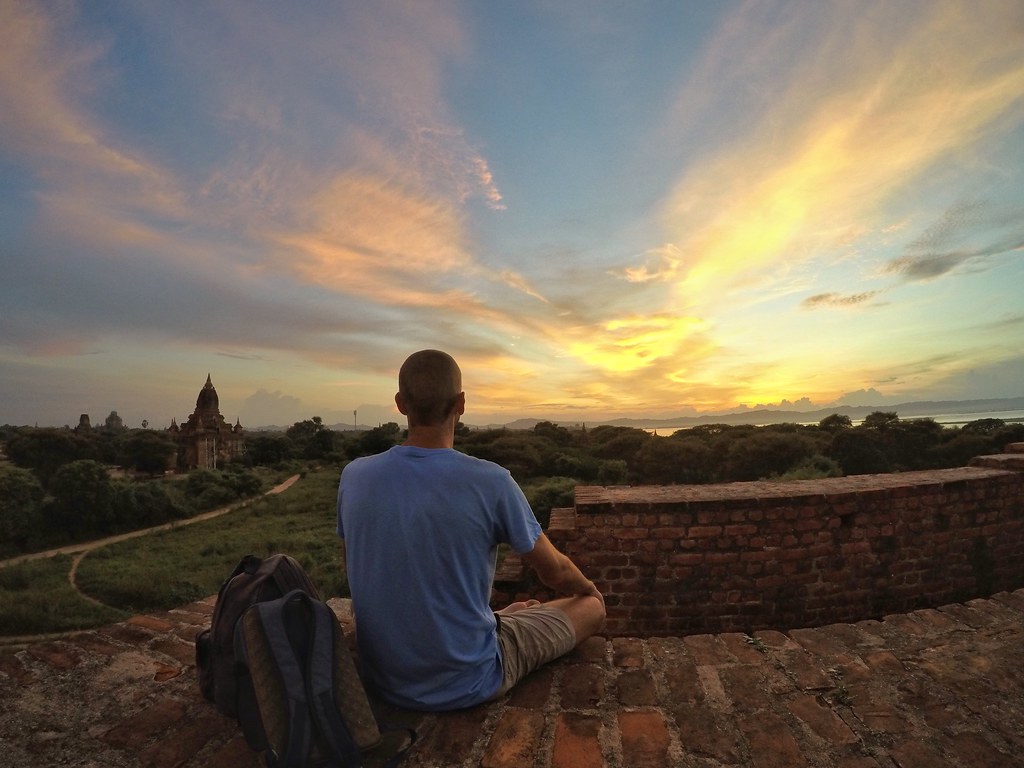