Kyrgyzstan is THE place to go horse riding in Central Asia, so as a belated birthday treat we went on a one day horse ride to Kul Ukok near Kochker. We were driven to the horsemans house where we found out he didn’t speak any English except for the word “problem?”. I was quickly given a push up onto a beautiful auburn coloured horse while Craig got a slightly smaller black one. I took the piss out of him for being on a smaller horse but the laughter stopped when I realised it was clearly because the guide saw me as the heavier one! 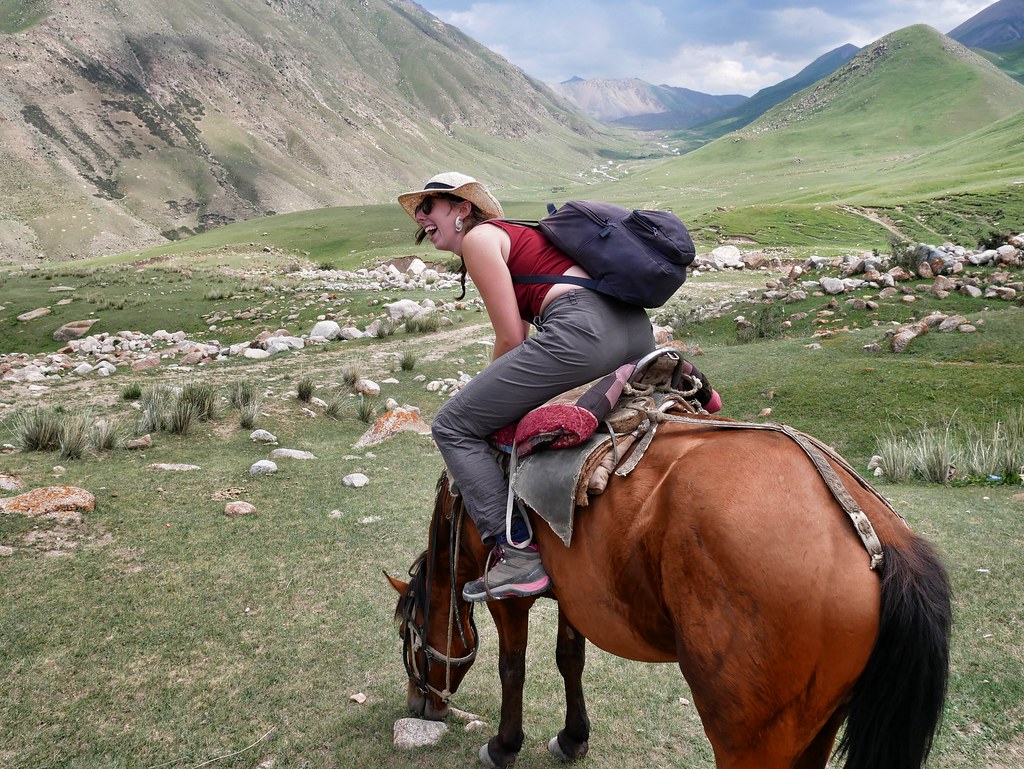 Without any instruction whatsoever we set off on the 18km trail. Occasionally the guide would say “problem?” and we’d say no and try and give a thumbs up while holding on for dear life. We were very grateful that our friend in Portugal took us horse riding and taught us some basic skills so we could turn and stop our horses. We traversed a flat grassy area scattered with clear streams and soon enough we were heading up a steady incline through the valley. A wild river flowed alongside us and we had a big section of it to cross on horseback. The horses all stood in the shallows and lurched down to have a drink and in-turn we got flung forward and had to cling on. It was a bit of a scary route as the river was fast flowing and full of rocks but the horses plodded on and we made it safely across. 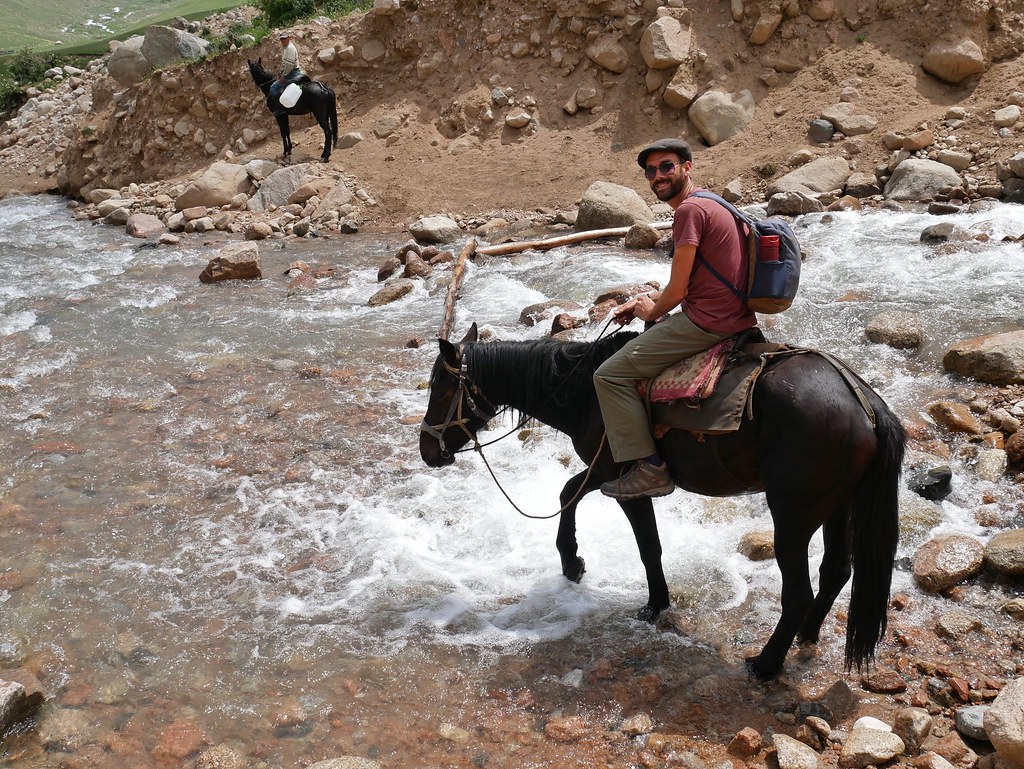 The final section up to the lake was a little steep and we were led up a rather precarious route which was narrow with drop offs and big rocks to step around. From the top we had an amazing view across Kol Ukok lake which was prettier in person than in the photos I’d seen. When the sun came out from behind the clouds the water turned a fabulous azure colour. It took a long time to reach the far end of the lake and again the trail was pretty rough in areas with 30m drops straight down into the lake. When we reached a plateau my horse did a spontaneous gallop as if it knew the end was close. My bum could hardly handle the pain but it was a lot better than the awkward canter it kept doing where I just flopped around like a corpse tied onto the saddle. 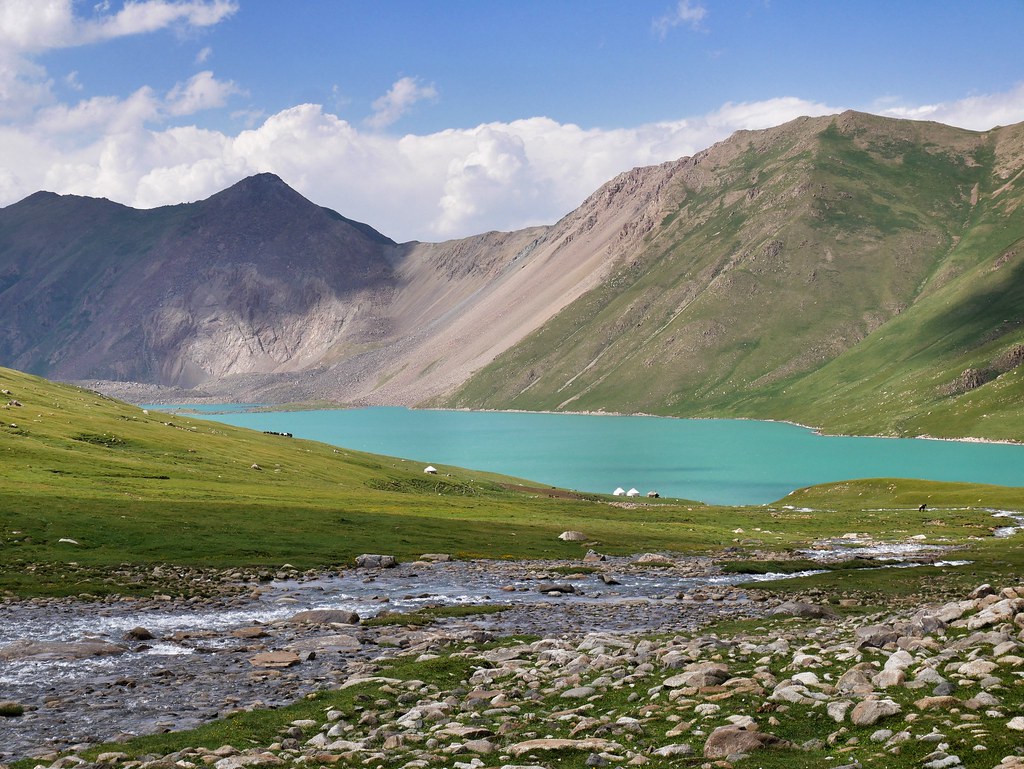 There were half a dozen yurt camps around the back end of the lake and our guide took us to his chosen one. The family were lovely and we agreed to stay and get full board with them. It was the most authentic yurt stay we’ve had and for the first time we ate with all the family. There was a very sweet grandad and grandma with dark, creased faces and a twinkle in their eyes. Their daughter had three little boys which the grandparents clearly adored having around, and I’m not surprised as they were so well behaved, quietly absorbing their surroundings. 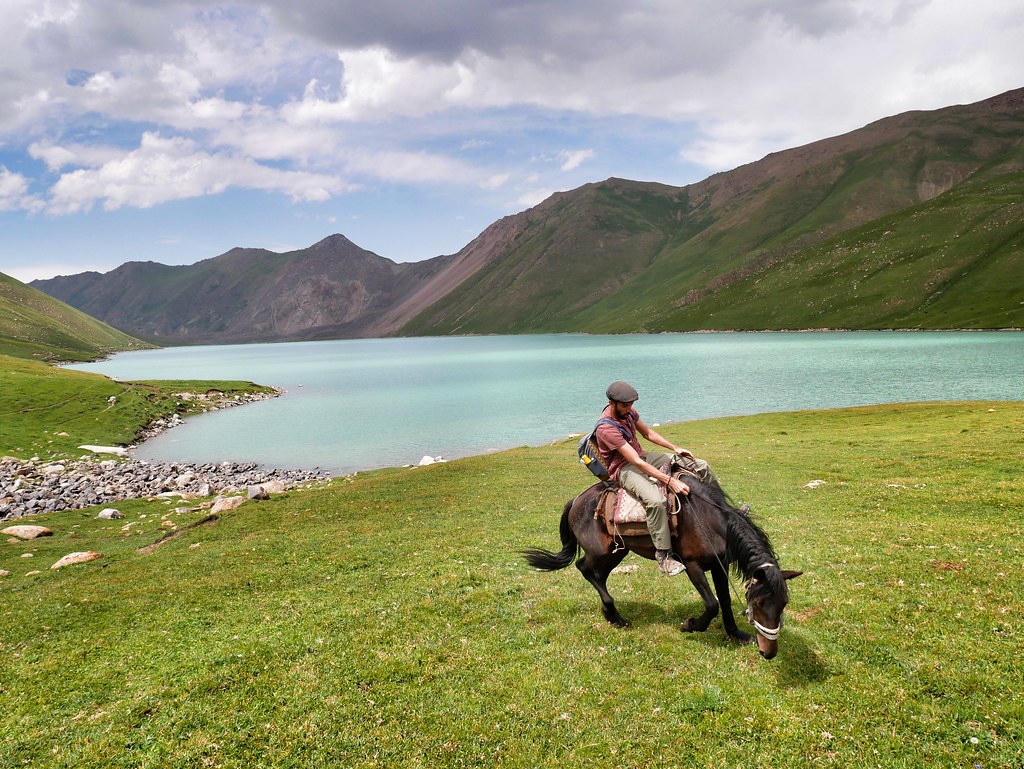 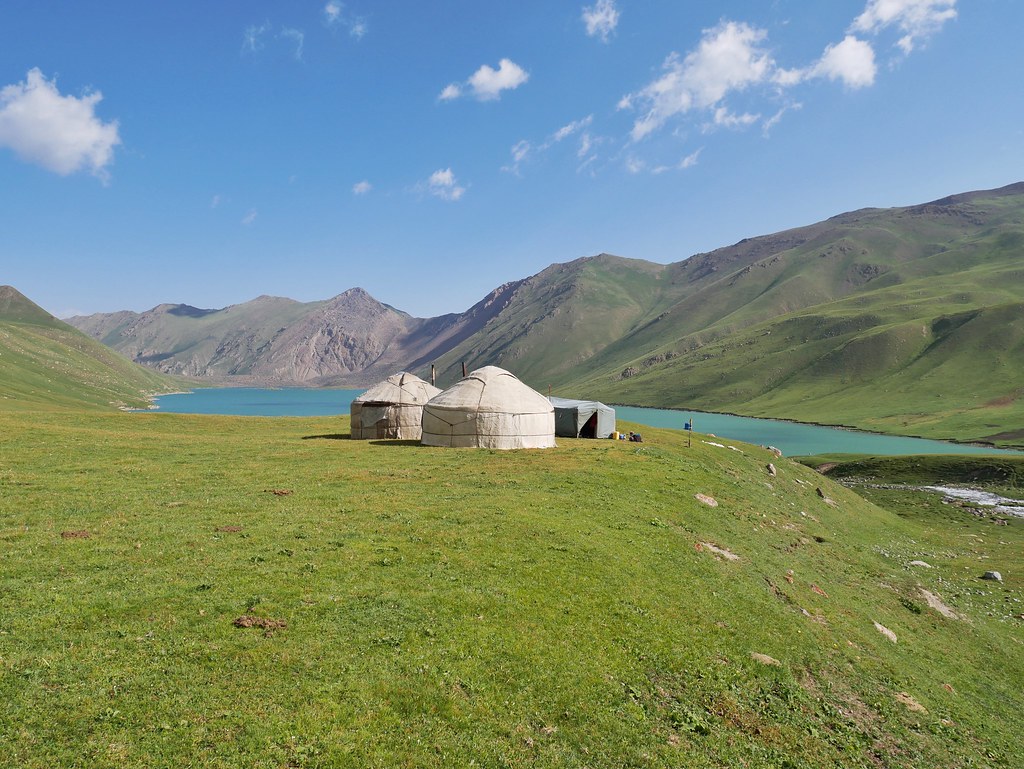 They just had two yurts, one for us to sleep in and the other was where the whole family slept at night and in the day it became the dining yurt where we were having lunch. A sort of small army tent was where they did all of the cooking, laundry etc. They handmade flatbread and served it with the most delicious wild strawberry jam. They even had cream fresh from the cows so we were back in our element slathering it on our bread with jam. The bread and dips were so good that we thought lunch was over but then a huge bowl of fried potatoes came out and we were served lots of delicious tea. The daughter casually changed the babies nappy behind us and then I noticed one side of the yurt had a washing line with dozens of washed nappies hanging up. 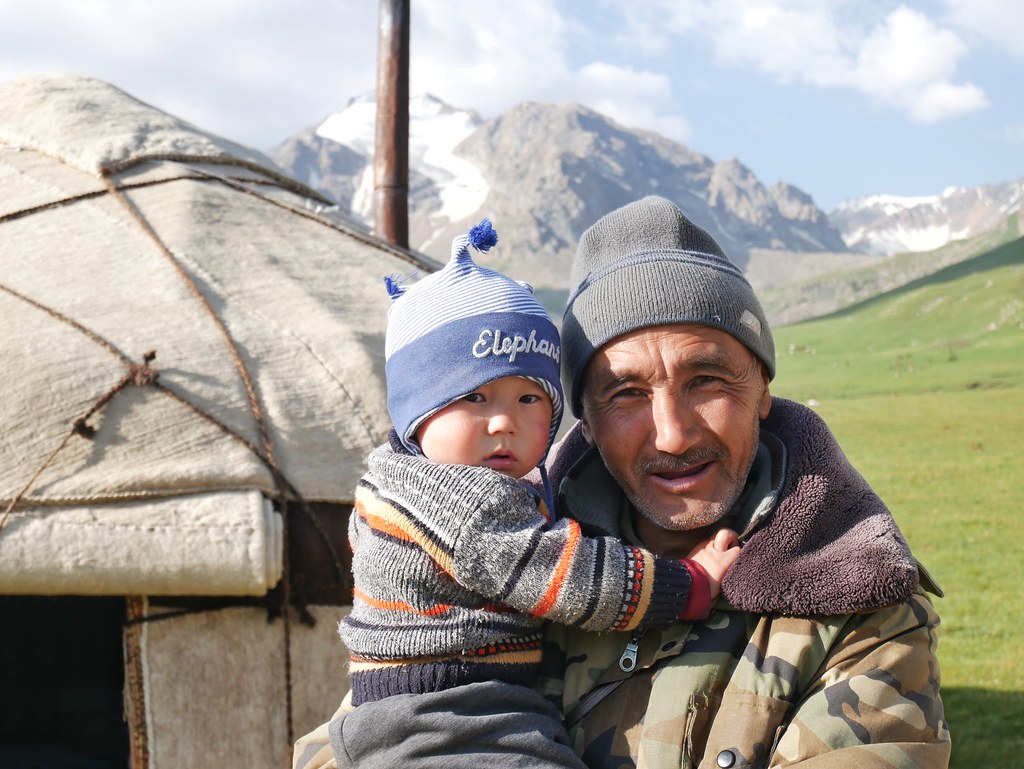 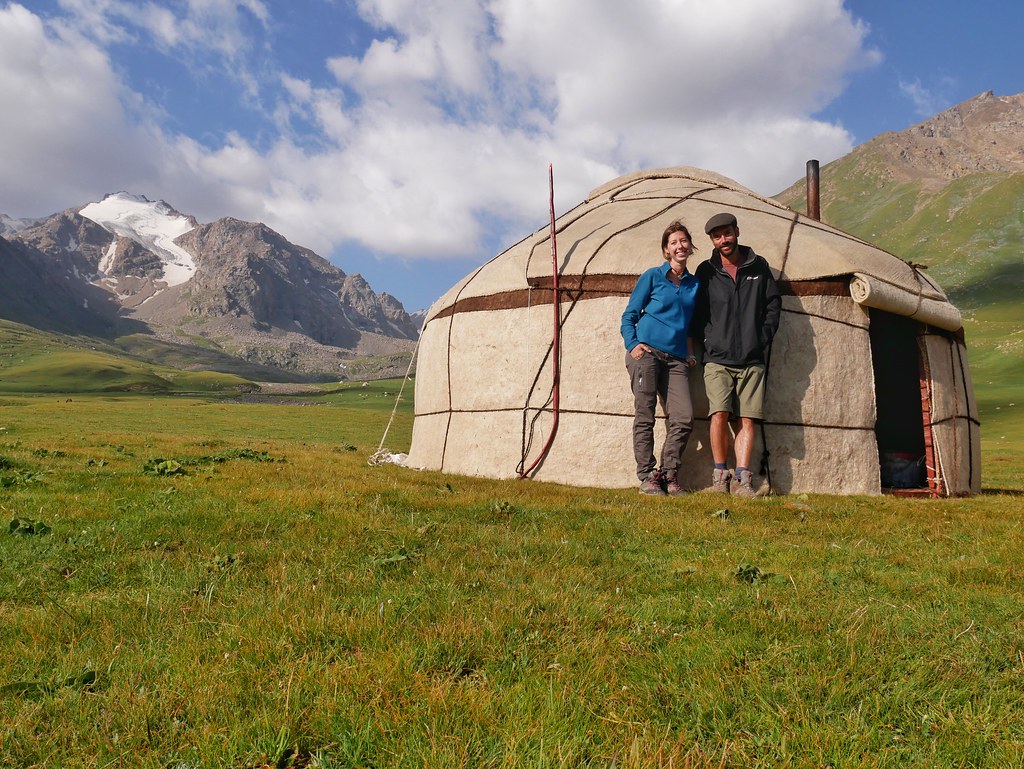 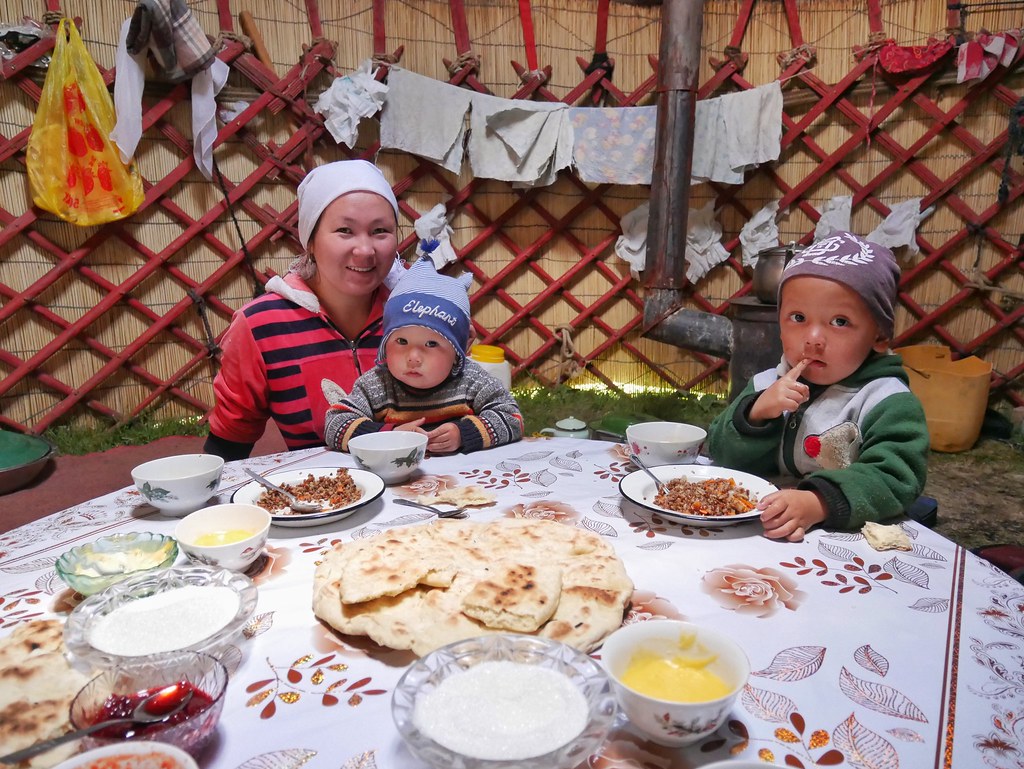 Our plan was to do the horse ride and then hike up to Kul Tor that same day, the next day we would hike back to Kochker. It was already 4pm so we really needed to set off on our hike and had to pick a moment to slip away without seeming rude. Just before we plucked up the courage to excuse ourselves a plastic container filled with kummis (fermented horse milk) was opened and poured into cups. The locals were lapping up the sour tasting drink, Craig quite enjoyed it too but I declined the offer as politely as I could as I think I would of projectile vomited had I been reminded of that foul taste. Interestingly the baby was given some and clearly hated the stuff, screwing his face up in disgust…but we know he’ll grow to love it as his sibling grabbed the container and sat with it as if guarding his treasure. 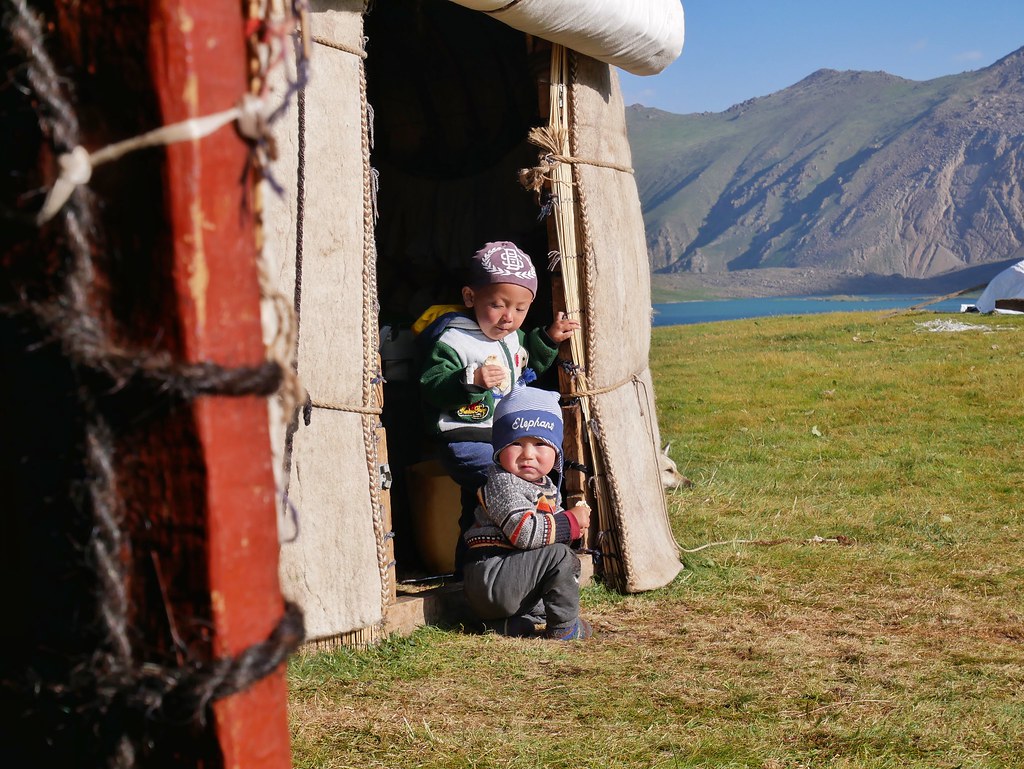 We eventually set off on our hike through lush green pastures filled with grazing goats. It soon led to a steep rocky mound which we climbed up and over and two hours later we were at the top. We were really excited about Kul Tor as it’s a glacial fed lake so the colour should of been a milky blue but it was more of a murky brown. It was still very pretty but the main highlight of this hike ended up being the huge snowy peaks and glaciers surrounding the lake. There was a gravelly beach along the shore which we had to rock hop over the top of a waterfall to reach. From the beach we had a perfect mirrored reflection of the snow capped mountains. It was a stunning spot and amazingly we had it all to ourselves. 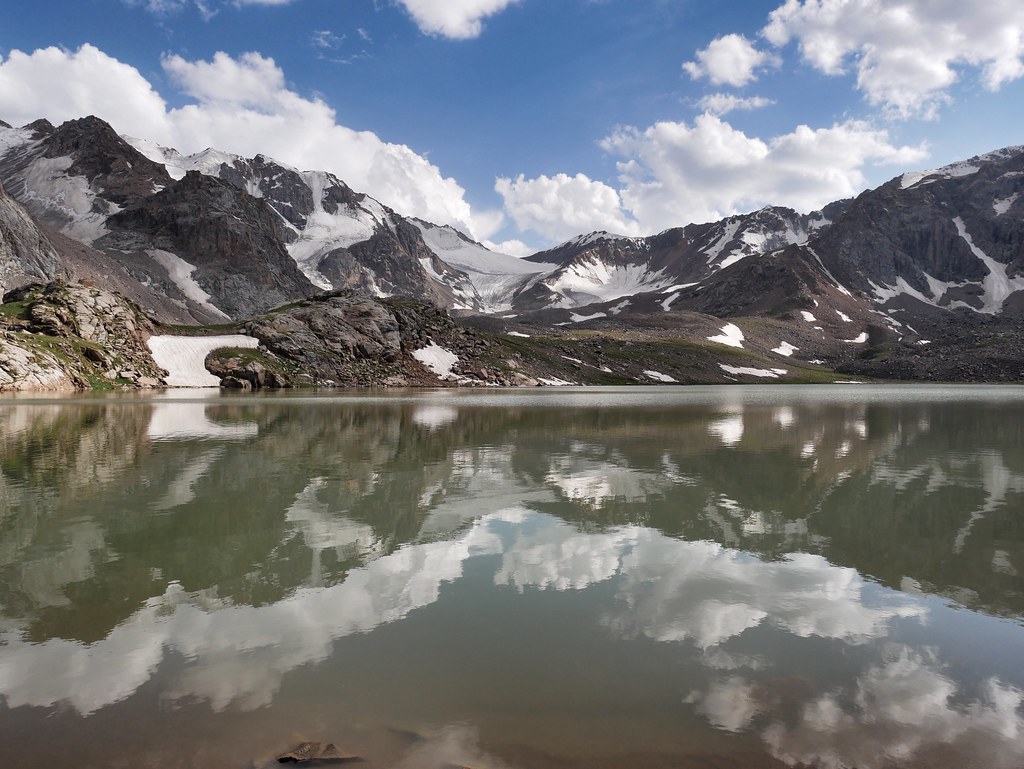 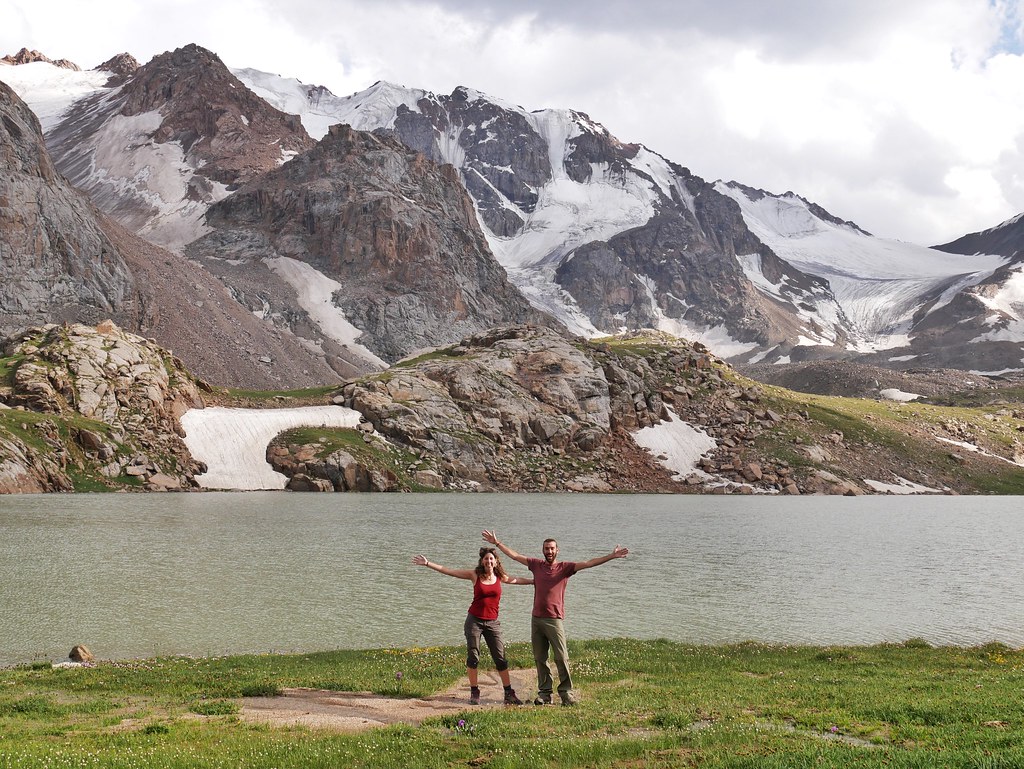 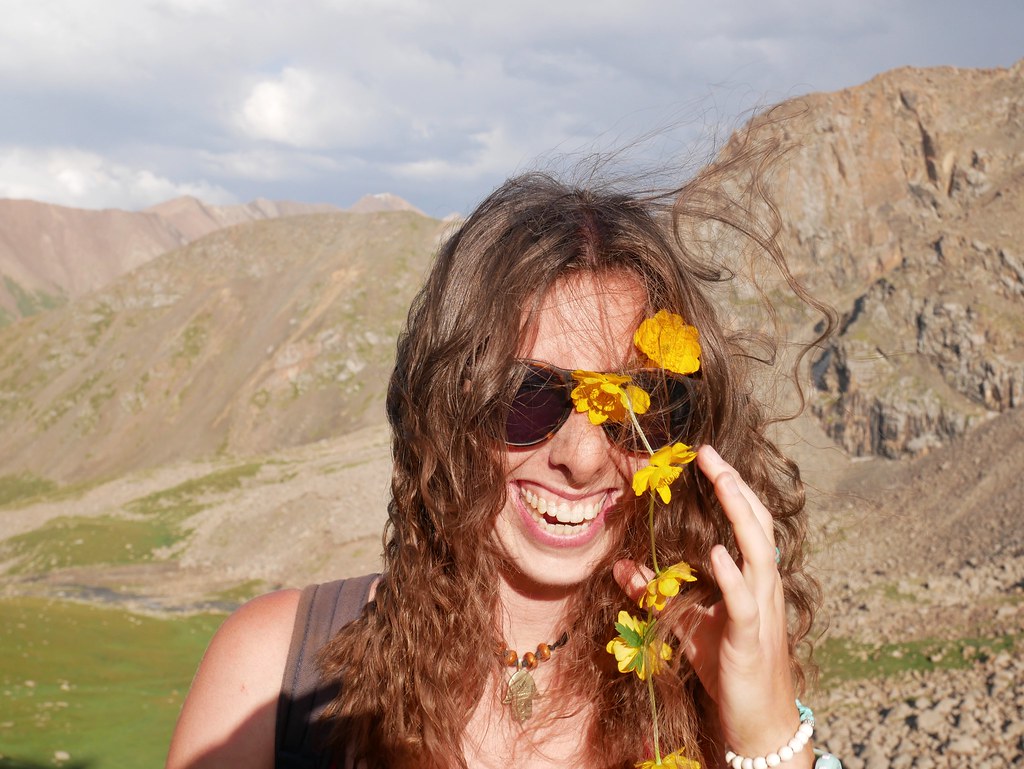 The hike back down was nice and quick, passing through an area with giant dandelions and buttercups. We got back to our yurt just in time as the weather was turning bad. The family had made up our beds on the floor for us and then they went about starting a fire. It was our first yurt with a log burner so quite a treat on this stormy night and they filled it with animal dung instead of logs. 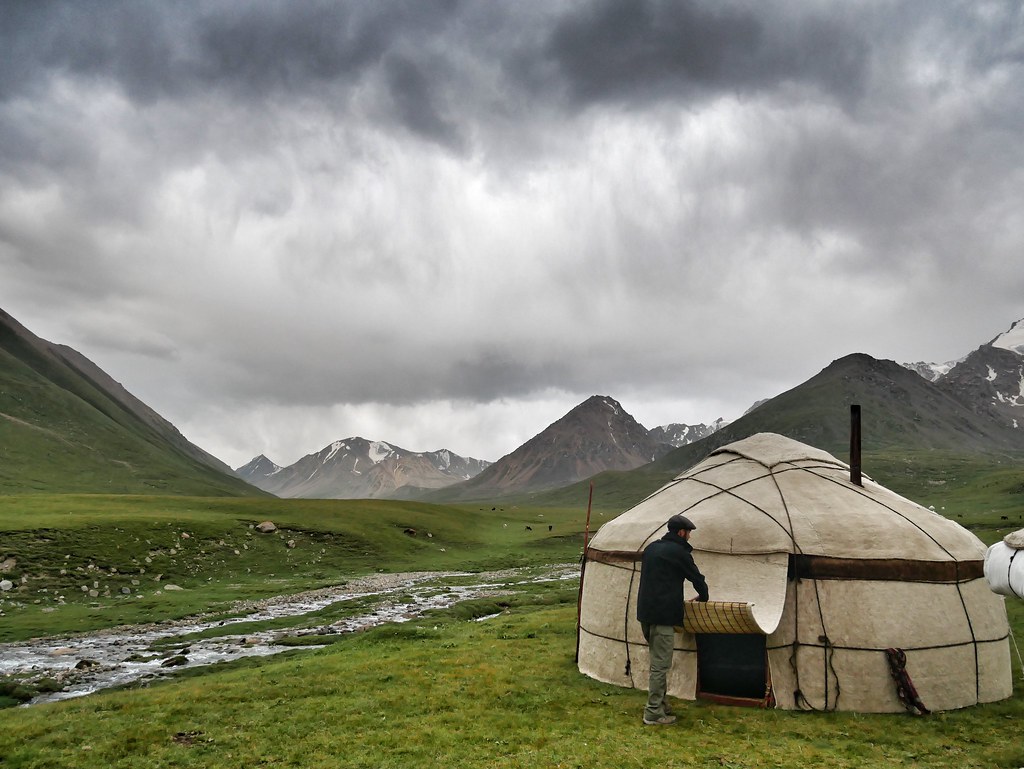 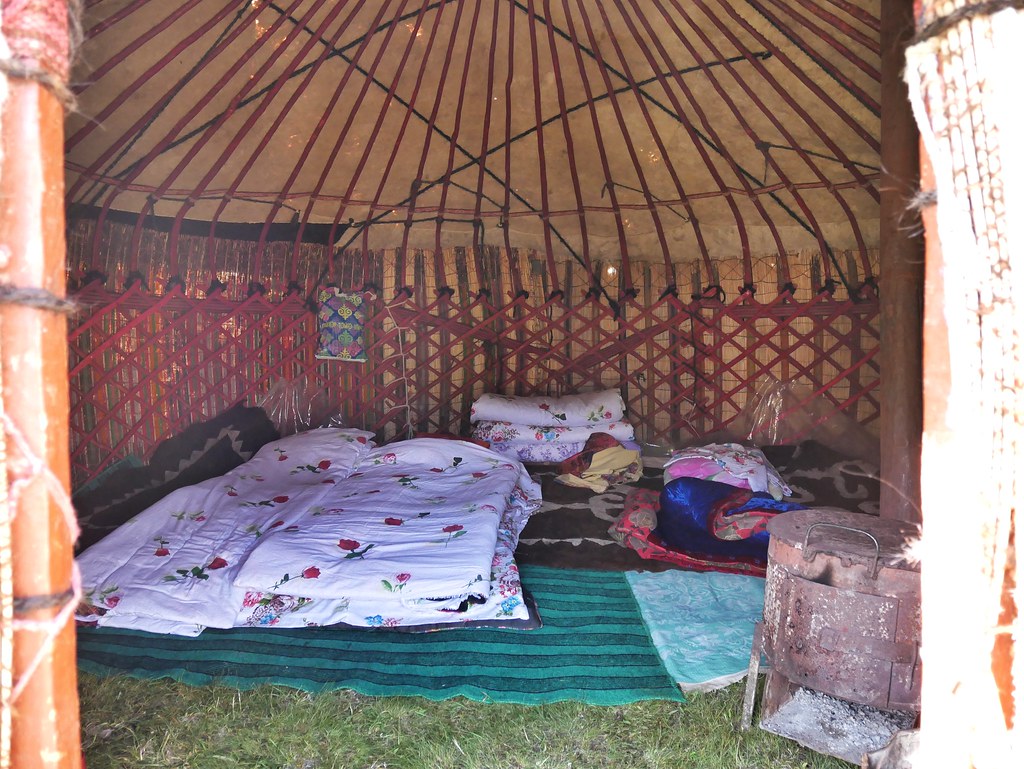 The wind and rain pelted down but we stayed warm and dry in our yurt. The door was flapping about though and suddenly a hand poked its way in and we noticed a rope was being grasped, so we grabbed on and tied the door down. Later on we joined the family for a hearty vegetable soup and plenty more cream and jam.

Sadly we didn’t sleep too well, the door was still flapping in the wind and I was paranoid about carbon monoxide poisoning from the rustic log burner. We woke to sunshine though and the lake outside our front door was bright blue. I wanted to use the toilet but it turned out to be the most basic one we’ve ever come across. All of the camps have a drop loo a little walk away from the homes, usually with wooden or metal walls a bit like a beach changing room. But this one just had four wooden poles with plastic fabric from rice sacks tied between each pole. The plastic was only 4ft high and on one side was a metal ‘door’ which was equally as short. They’d only dug a hole about 2ft deep and clearly hit rocks so just gave up…the pit was half full of shit already so it was actually in the splash-back region. Instead of having a small hole in the ground, this one was 1 meter wide with just two planks of wood to balance on. It felt like a very scary beginners course in slack-lining. The main issue however was the wind that was gusting through the valley and directly onto the plastic walls. I tried opening the door and immediately got attacked by the fabric on the rear, it was like a fat person trying to squeeze into a tiny toilet cubicle. The fabric was ripping on the edges and totally out of control. There wasn’t enough space to squat as the fabric was wrapping itself around me so I just went for an awkward wee with my backside poking out the door so I could get some space. 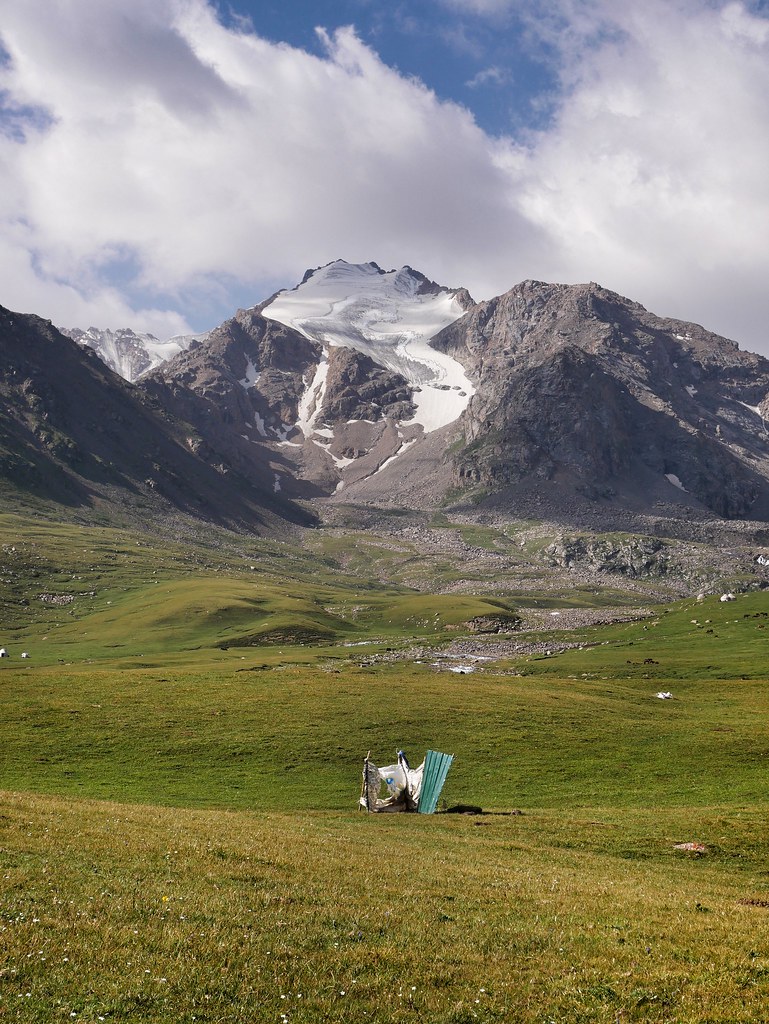 We walked all the way back towards Kochker and it was rather dull. Without the horses we had to cross the river on our own and we really struggled to find a good spot to do so. Craig opted for a big jump onto a boulder but when I stood up and saw the rapids flowing below me I freaked out and couldn’t do it. So I had to take my boots off and wade through a knee deep area which was calmer but still had a very strong current and I was getting a little panicked as the water got higher and higher. I made it across though and a few hours later we were back in Kochker sitting on a western loo out of the wind. 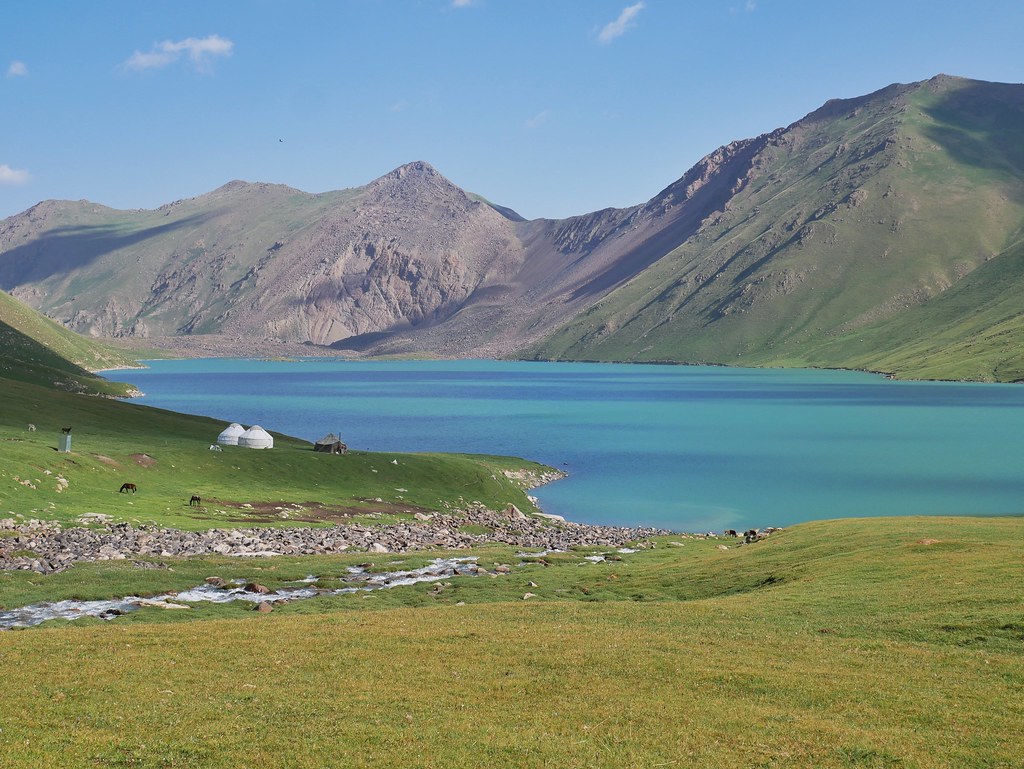