The Karkara border is a rather remote place to cross from Kazakhstan into Kyrgyzstan but we really wanted to do it to save lots of backtracking. We read blogs online and researched as much as possible but it all came down to luck on the day. So here’s how it went down:

After spending a couple of nights in a homestay in Saty, Kazakhstan we needed to head south east to the border. Saty is a tiny village at the end of a road so coming from Almaty would probably be a lot easier. But as luck would have it we waited out on the dusty main road and a lady asked us where we were going. She was watering her garden in a baggy flowery frock with a matching bandana and plastic sandals covered in mud from the garden. She owned a homestay but instead of our host, she offered us an honest price to the town of Kegen, 2000 tenge per person (£4). She guided us into her garden to wait and after 10 minutes I was getting very impatient. I could see a few cars driving past which were all potential rides…but still we waited. An old guy came out and gave the rustic car a mechanical check.

The engine was turned over and I grabbed our bags ready to pile in but was told to sit tight. We waited 45 minutes before we got into the car. We soon realised that it wasn’t just the car we were waiting for, it was the lady and her husband getting dressed into their fanciest frocks. The lady had neatly platted her hair and put on a very smart dress, blazer and pump shoes along with a pearl necklace, diamond earrings and gemstone rings. Her husband who must’ve been in his late 60’s was in a neat pin-stripe suit. We felt like they wanted to go to the village for a special occasion but it was too expensive to get there so by us paying it gave them the excuse to go and they frantically grasped the opportunity. 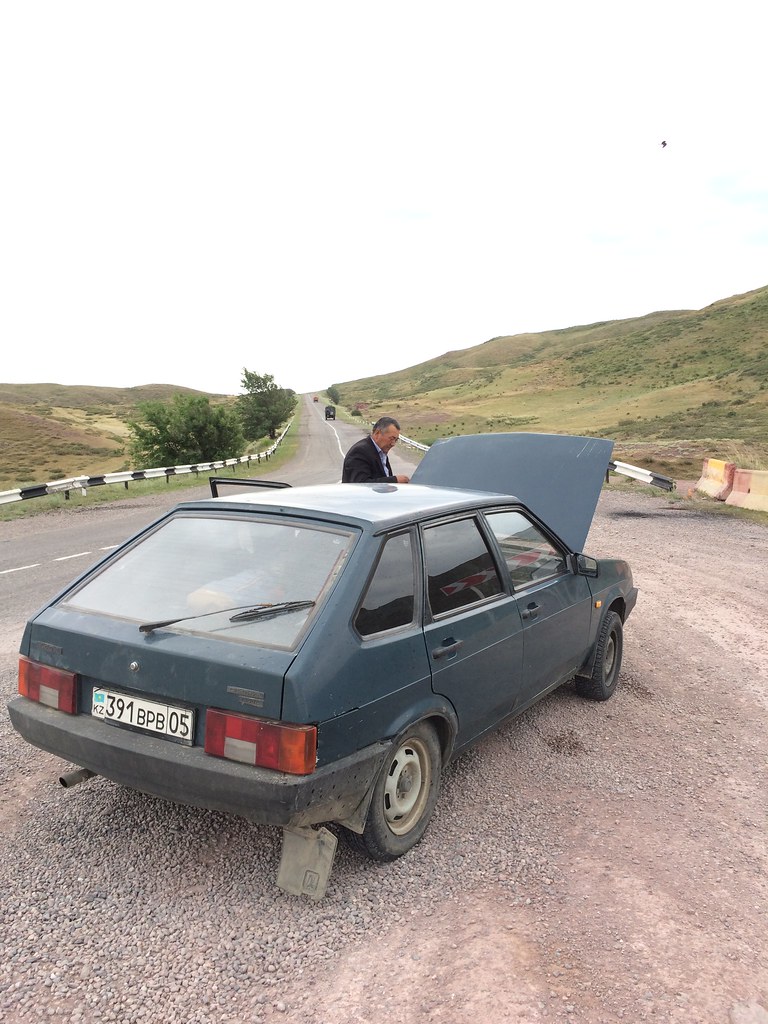 Before setting off the bonnet was opened, and a panicked looking son ran out with a plastic bag and cello-tape. After five minutes he’d attached it all to something we couldn’t see and we were on our way. It took two hours to reach Kegan and the old guy was absolutely flying along the empty roads. We were going 120kmh and the wife was totally unfazed. It was a little scary but also hilarious as the guy obviously hadn’t driven the car in ages and bloody loved it, he’d reach a bend going 100km an hour and have to slam on the brakes and when he turned he’d move his whole body sideways, occasionally crushing his wife, who still sat there unfazed.

We were happy to see Kegen was heaving with cars and people so our chances of a ride were high. We walked 50m to the junction with the road to the border and a driver was quick to wave us over. We asked how much to the Karkara border and he said 2000 tenge (£4) per person. It was a good price, the road was rough and leads to the middle of nowhere so the chances of a ride back were slim so we hopped in. The sweet driver wore a little black leather waistcoat and had a twinkle in his eye. An old coat hanger was attached to the boot and used to open it up which we giggled about and he got all giggly too about his ingenuity. Super fast speeds took us to the village of Karkara and then the final 15km were dirt. It was a lovely place, just the odd herders and their yurts in valleys and nothing else. We were experiencing our first rain in Central Asia and it was causing havoc along the rough road, we couldn’t believe our driver was attempting it in a 2wd car. The road was totally washed out by a river on one section so we had to turn up a steep slope and we failed three times, making a loud crunch and rolling backwards, but eventually we got up.

The rain became heavier as we saw the lonely border post and our driver stopped for us to get out. It was just a short run to the gate but we were drenched within seconds. There were no queues but a few cars were passing through so it wasn’t as quiet as we’d expected. While Kazakhstan stamped us out we frantically searched for our wet weather clothes and we looked like absolute twits in our ponchos, waterproof trousers and Jesus sandals. We were stamped into Kyrgyzstan without any security/baggage checks like we’d read about online – maybe the guards were too busy with the unexpected rain.

The section from the Kyrgyzstan side of the border to the town of Karakol was going to be tricky with such light traffic and no public transport so we had to plan ahead here. A few days before the trip we emailed some hostels/hotels in Karakol and asked if we stayed with them could they arrange a taxi pick up from the boarder. We ended up getting a good price for the 110km journey and it cost us 3000 som (£30) for the whole taxi. We arranged for it to be there between 12 and 1 (thank god everything went smoothly earlier as we had little time to spare) and we were given the drivers car details while he received a photo of us…that was all, no prepayment needed, just trust on both sides. So we had to sit under a shelter of an office on the Kyrgyzstan side and wait. Once again I was getting very impatient and presumed the driver wasn’t coming. Every minute we wasted we were potentially missing out on hitching our way across, but we had to wait. Craig needed a wee and there was a vast area of grass and bushes along the roadside with a wall of an old concrete building so Craig went for a pee there. Suddenly the two border guards came out saying “no, no!” and pointing to Craig who had his back to us. They were quite chilled so I figured Craig was going to get a slapped wrist, but why anyway, we were in such a wild place peeing there seemed like the obvious option as there were no public loos. Anyway, Craig ran up and as soon as he got to the guards one became very angry “Passport! Give me passport” so Craig got it out but thankfully realised it was crazy to hand it over and managed to hold on to it. I quickly flicked through our guide book and managed to find the Russian word for sorry which we repeatedly said. The angry guard took another turn for the worst and said “PASSPORT, YOU DEPORTED” ooooooooh fuck!!! We continued our chanting of sorry in Russian and the other guard was actually really nice. Mr angry asked for the passport again and kept saying “I deport you! Go back Kazakhstan!”. I couldn’t believe what was happening, we’d gone to so much effort to do this remote border and everything had gone perfectly to plan. If we got deported would we be allowed back to Kyrgyzstan via a different border or was that our chance blown? The nice guard was really on our side and kept gesturing for the mean man to leave it, and my god were we relieved when he took his advice and walked away. I’m sure it was all just scare tactics, or them wanting some money but whatever it was it got us pretty shaken up. Then we realised the rain had stopped, why the fuck were we still waiting outside their office? It would look weird if we walked off now though, so we had to wait five minutes and then we slowly scurried to the road. The road was dead flat on a high plateau so we could see approaching car lights for about 15 minutes before they arrived.

We saw two sets of lights coming down the road. We were desperately hoping one of them was our red taxi, we desperately wanted to get away from the border. From a distance I declared it looked like a red car…our hopes were going up. As it got closer we saw it was the right brand and the number plate matched the one we were given. We must’ve looked so happy when this podgy old man with a flat cap and gold tooth stepped out and took our luggage. 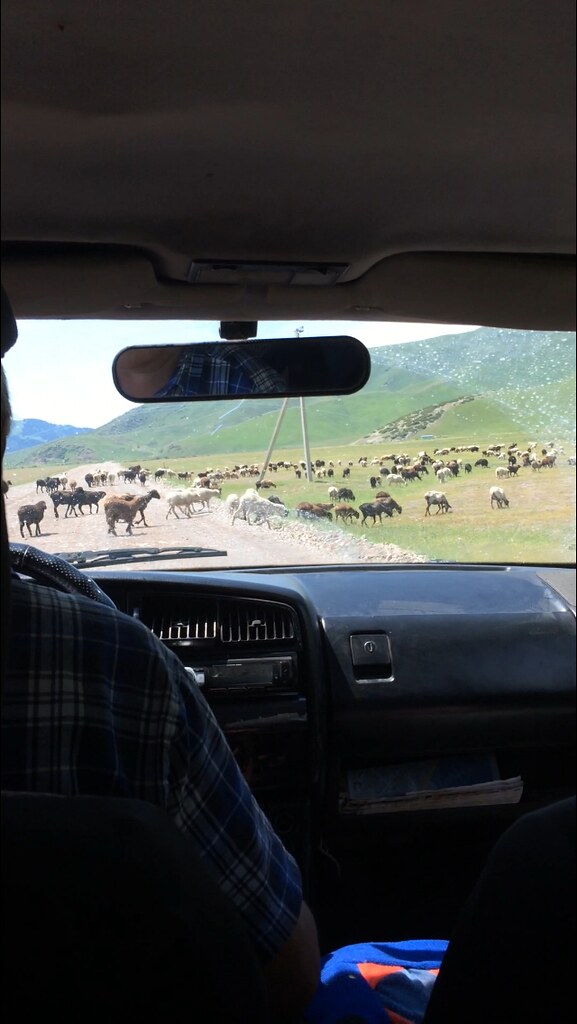 The sun was out and we were driving across 50km of dirt road through lush green valleys home to nomads and their livestock. Our driver took a pit stop at a group of Kummis sellers. I recognised the name from our guide book – Kummis is fermented horse milk and I was totally shocked when our driver came back with a giant cup of it for each of us. We graciously accepted the speckled white drink and then he left to get himself some. I took a tiny sip and nearly threw up. To me it tasted just like sour vomit, in fact it tasted like I’d downed a glass of milk, and regurgitated it into the same cup. It was a good job the driver was away when I tried it as I was gagging uncontrollably, my eyes were watering and I didn’t dare take another sip. Craig’s face screwed up when he tried it but he managed to break through the pain and he drank the entire cup! Sadly he didn’t want mine and I didn’t know what to do with it, it’s rude to say no to generous offers like this and I certainly didn’t want to be sly and pour the drink away, pretending that I loved it (though it crossed my mind) but what if he got me another cup of it? So when the driver and the shop owner came over I patted my tummy to suggest it didn’t agree with me…would you like it instead? But we had a classic charades failure and they presumed I loved the shit, who doesn’t, but it was a lot to drink quickly so please decant it into a bottle for me to keep on the journey. So there I was, two hours later, holding half a coke bottle filled with Kummis and no lid on it. The sour smell was wafting up my nose while I occasionally gagged at the memory of that one sip. 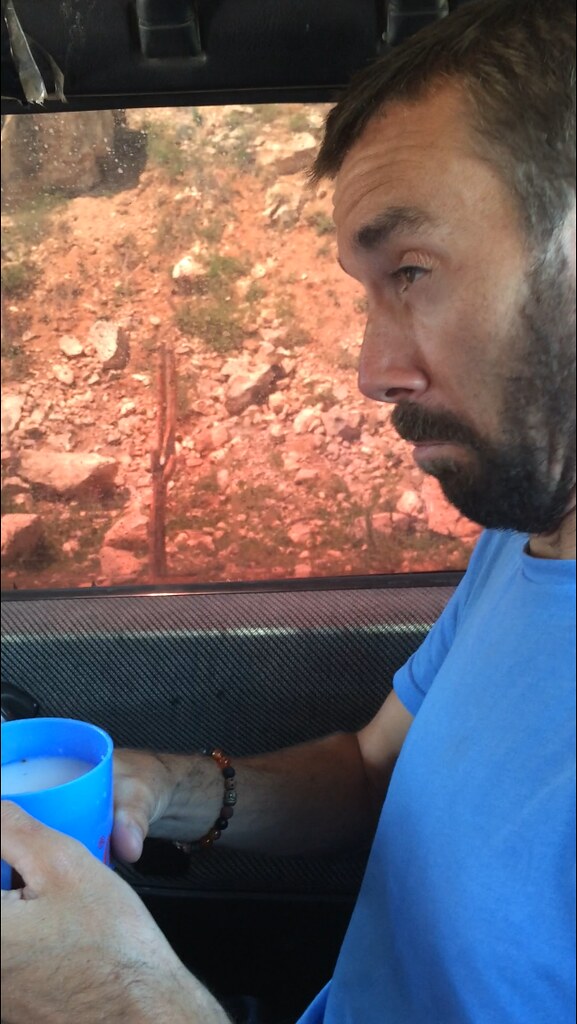 After 7 hours travelling from Kazakhstan we arrived in the very pleasant town of Karakol. Except for nearly being deported, I’d say it was a very successful border crossing. The Karkara border was pretty easy for us, maybe we were lucky? But at around 12-1pm there were about 10 cars that passed through the border so I think had we not prebooked the taxi we probably could have hitch hiked…but maybe it was a busy day and other times barely a soul passes by? If we had a tent we would of definitely risked it and not booked a taxi The total price from Saty in Kazakhstan to Karakol in Kyrgyzstan was £46 for two people. Certainly not cheap but if we didn’t do that route we’d of spent that amount in extra days staying in hotels going the long way around via Almaty and Bishkek. I’d recommend getting some Kyrgyzstan Som in advance to pay your driver, we did this in Almaty and changed any leftover Kazakhstan Tenge in Karakol. If you end up doing this border crossing let us know how it goes in the comments.