It was time for us to leave Almaty and head to the village of Saty in the foothills of the Tian Shan Mountains. Within an hour of setting off however, our shared taxi had a blowout and we needed to wait in the scorching sun for the driver to replace it with a completely bald tyre. Saty was a very rural place with cows, horses and chickens roaming along the dusty streets. We arrived at our first home stay in Kazakhstan where we got a way overpriced room with half board. The bed sheets were Gucci print which was funny as outside our window, across the grassy garden dotted with sheep and chicks, was a rustic wooden shed which was our non-designer-label toilet. It was a drop loo but weirdly the hole cut out of the wooden floor had metal bars criss-crossed on it, I presume to prevent a small child from falling into the sloshy pit of hell. But the metal bars sort of got in the way of ‘business’ so were coated in old crusty shit. Enjoy that image.

We were given a huge platter of traditional Kazakhstan food, most of which was homemade by our host. There was a couple of homemade cheeses which we weren’t fond of, one sweet and soft and the other hard and sour. But what we did love was the Kazakh bread, deep-fried and tasting like doughnuts. To go on top we had homemade sour cream which was literally like Devonshire clotted cream. It was fresh from the cows outside and we watched the hosts use a modern churner which dripped the pure fat into a separate container to create this magic. We slathered it on our doughnuts with jam on top and plenty of cups of tea on the side – true Brits!

With full bellies and still a lot of the day available we wanted to visit Kaindy Lake. Our host tried to arrange a taxi for us up the 10km dirt road but her prices were outrageously expensive, 8000 tenge (£18). So we decided to wait on the junction to the lake hoping to hitch a ride…we were the minority visiting this area independently without an organised tour so it was never going to be easy. It was hot and dusty so we were ready to give up after just a short while, but just as we did a vintage soviet jeep pulled up full of locals and we hopped in for 2500 tenge per person (£5). There were five Kazakh lads, three kids, the driver and us inside. They were all very jolly and excited to have tourists joining them, so we had three iPhones filming us most of the way. The ride was probably the roughest we’ve ever experienced. We crossed rivers and large boulders and our knees were constantly banging into the seats while we got thrown about like rag dolls. Whenever we crossed a river the driver would stop and top the vintage car up with water. It took an hour to drive just 10km but we arrived at the end of the ‘road’ and the views were incredible. Lush green slopes leading up to rocky peaks all around us and two clear lakes nearby. 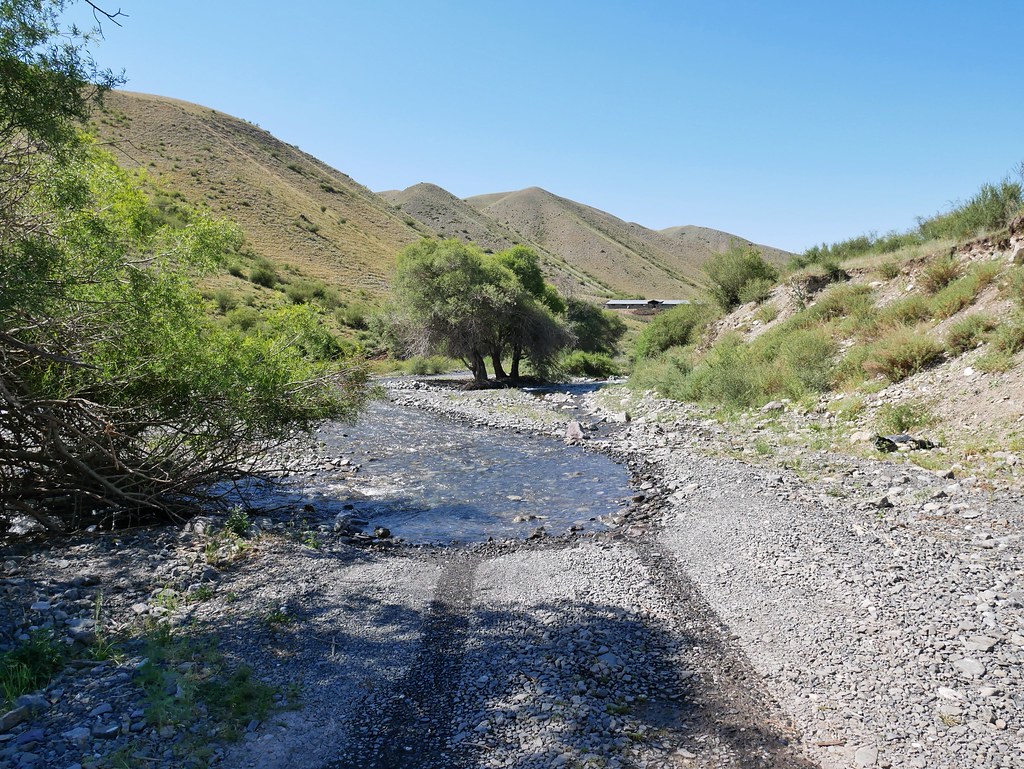 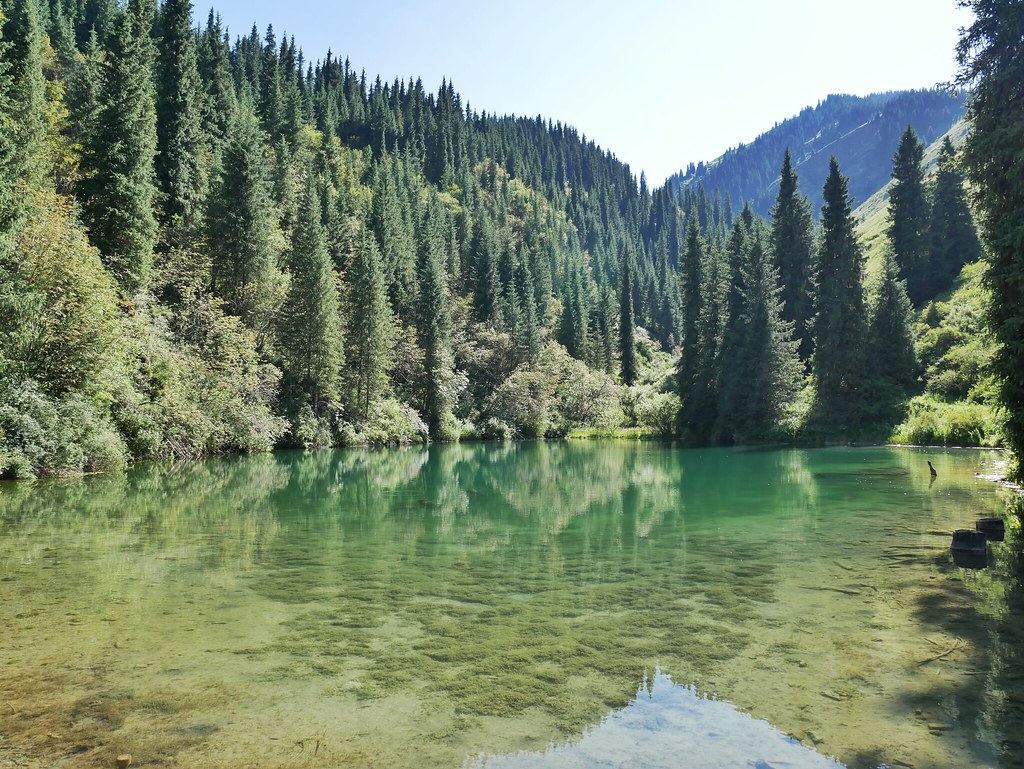 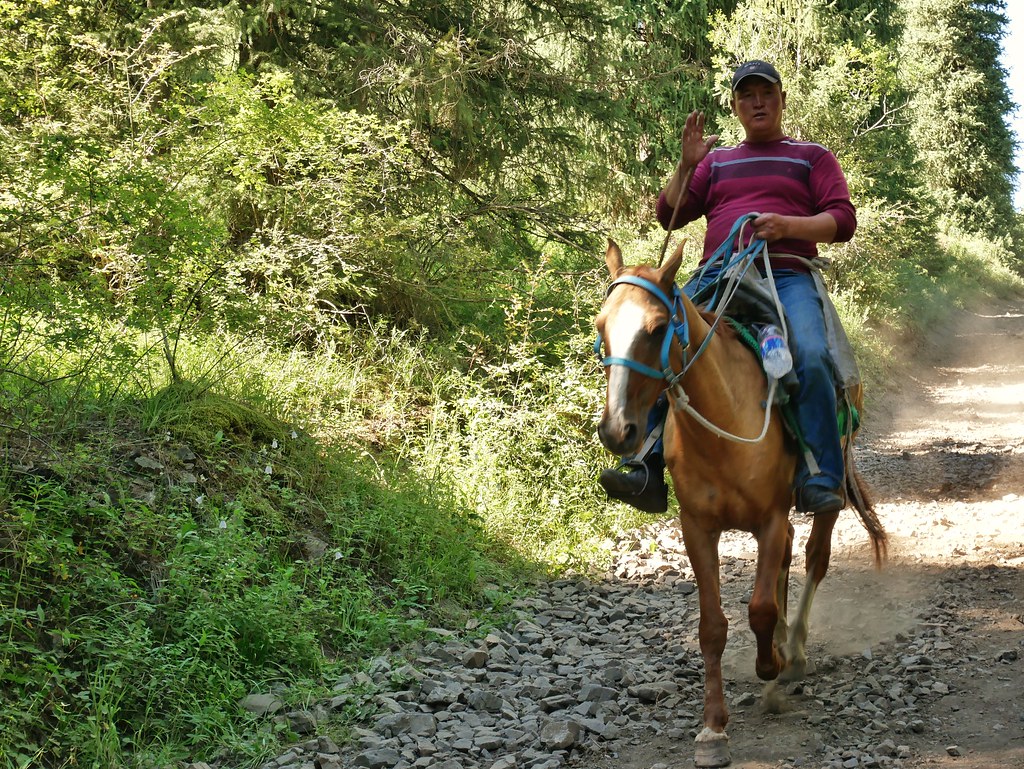 It was a 10 minute downhill walk through pine forest to reach Kaindy Lake. The lake is famous for being created when an earthquake in 1911 caused a landslide which made a dam and the valley filled up with crystal clear mountain water. The tree trunks remained inside the water and the temperature was only 6 degrees so it actually preserved the trees. It was a very unusual sight with pine tree covered mountains rising from the shores of the mesmerising blue lake. 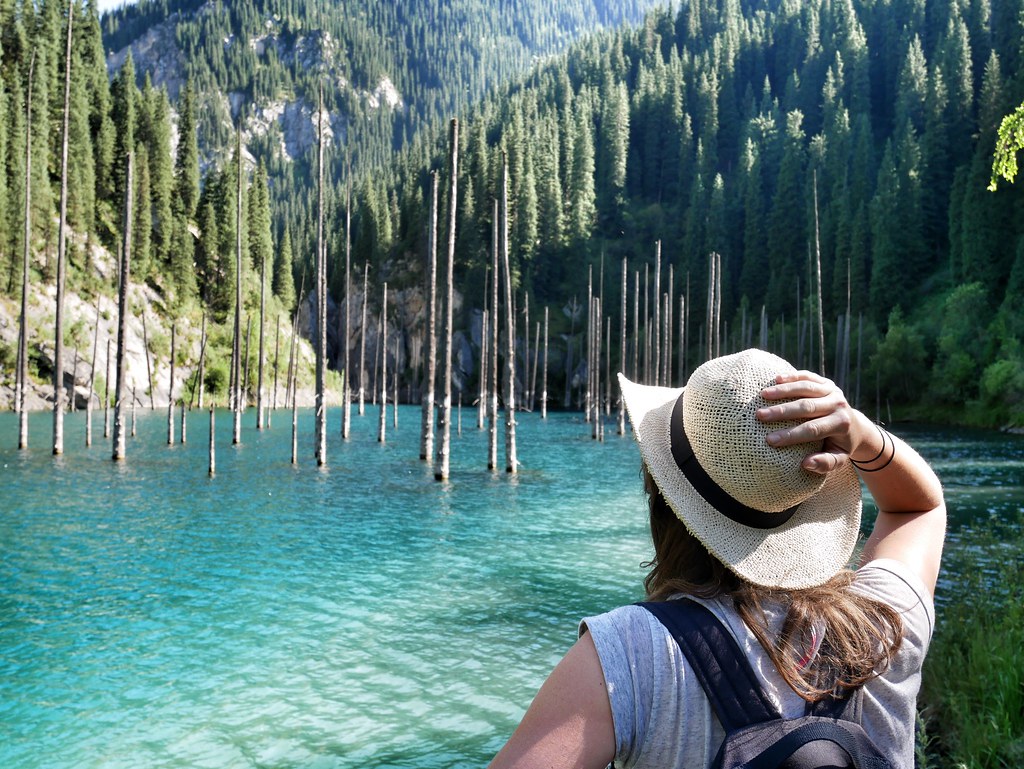 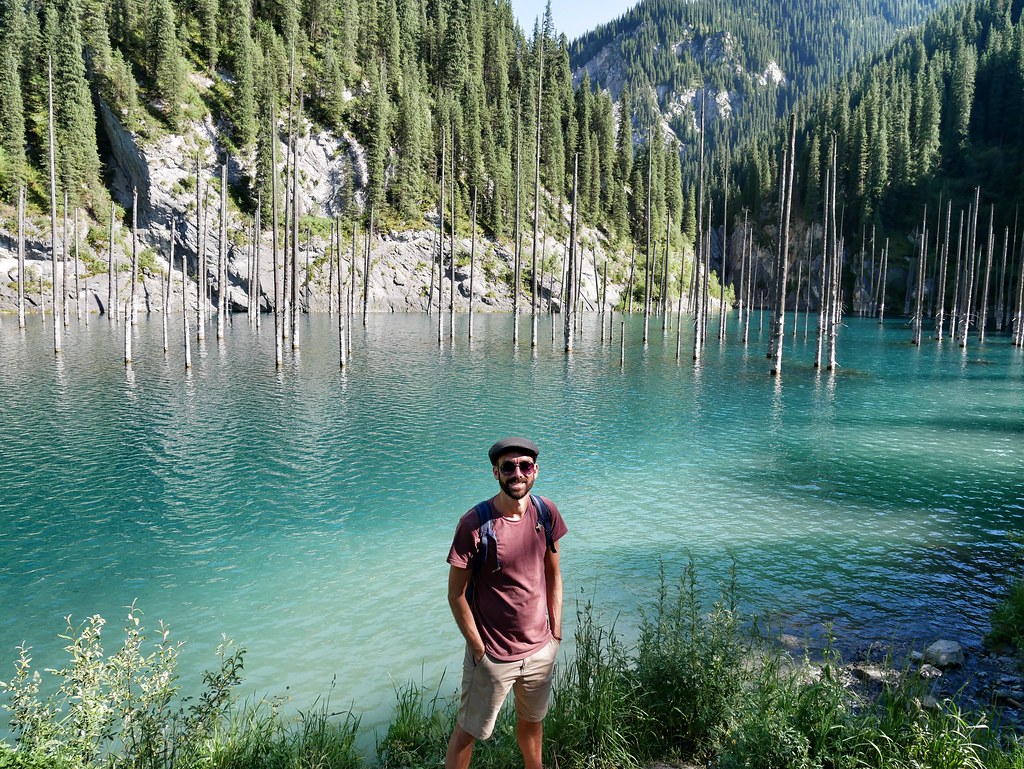 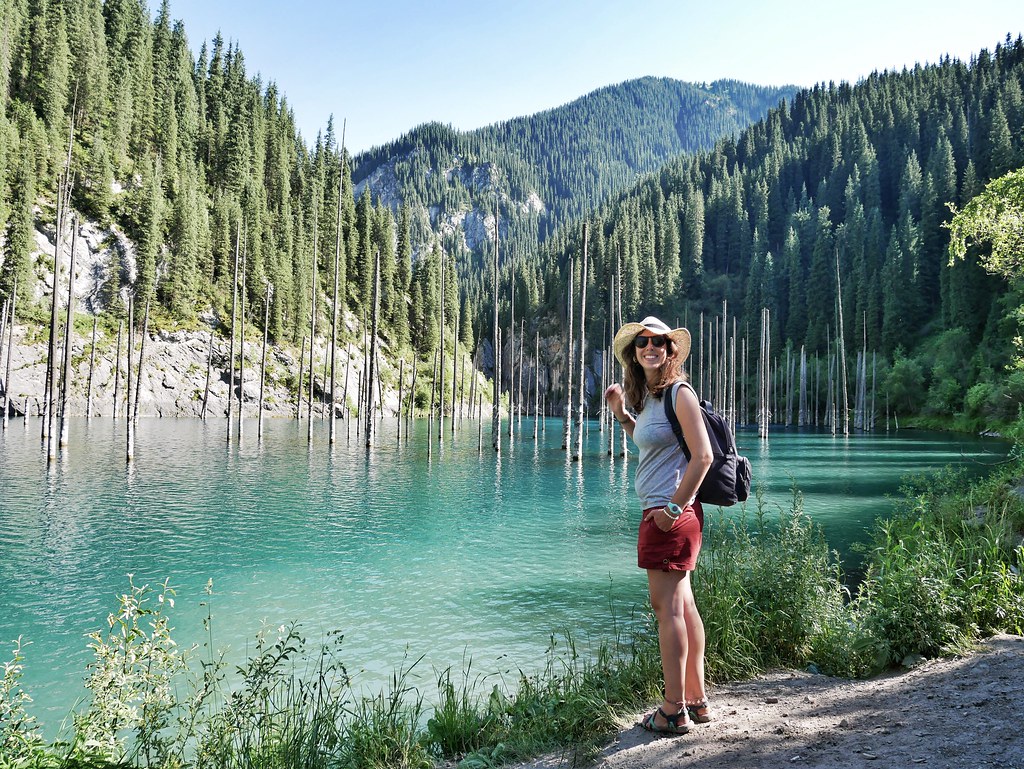 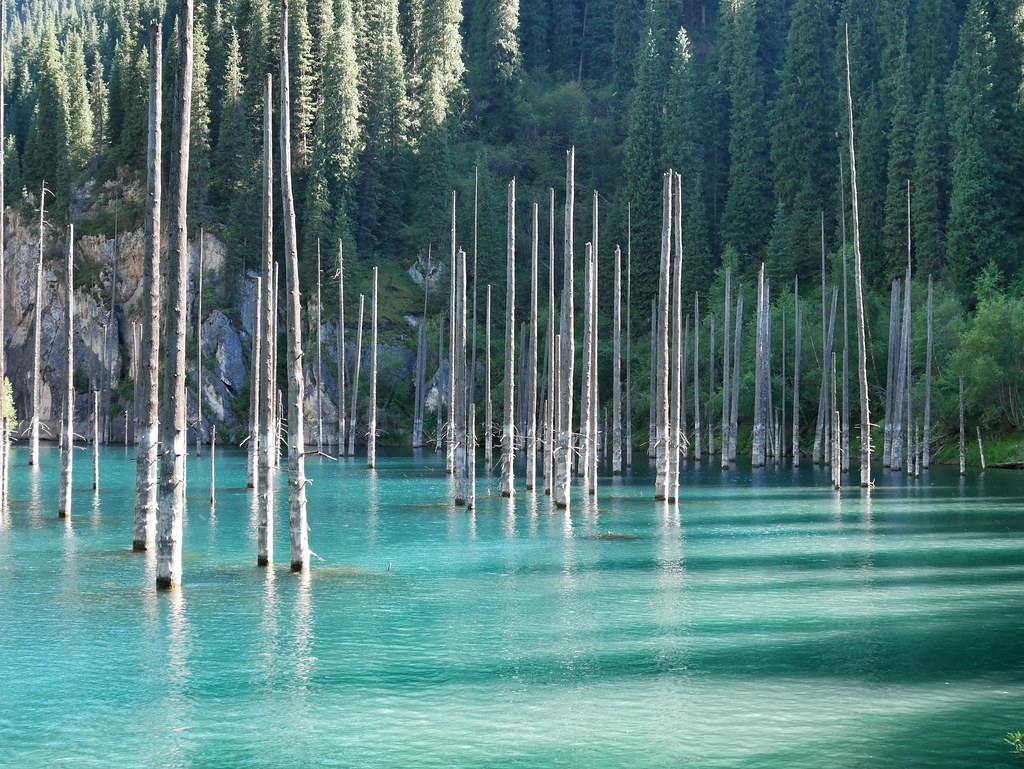 The water was twinkling in the sun and crystal clear but as soon as we stepped in we disturbed the silt and it went hazy. So after taking in the amazing view we headed back up for a swim at the other lakes hoping they would be less silty – they weren’t, but we managed to have a nice cool-off before the long drive home. 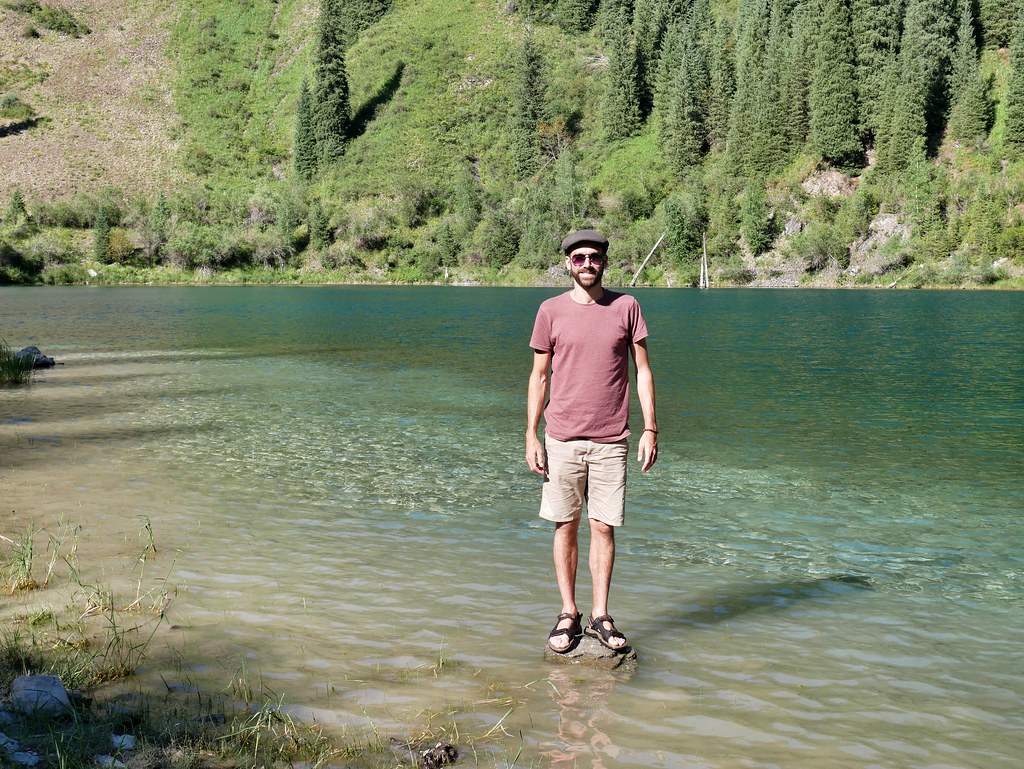 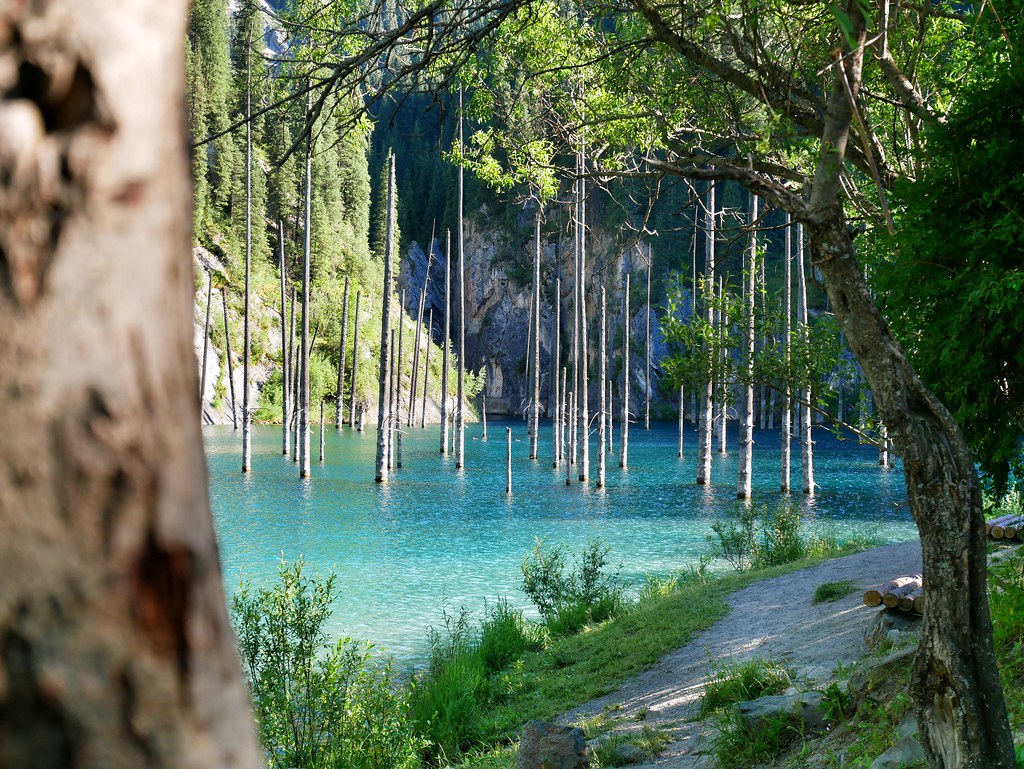 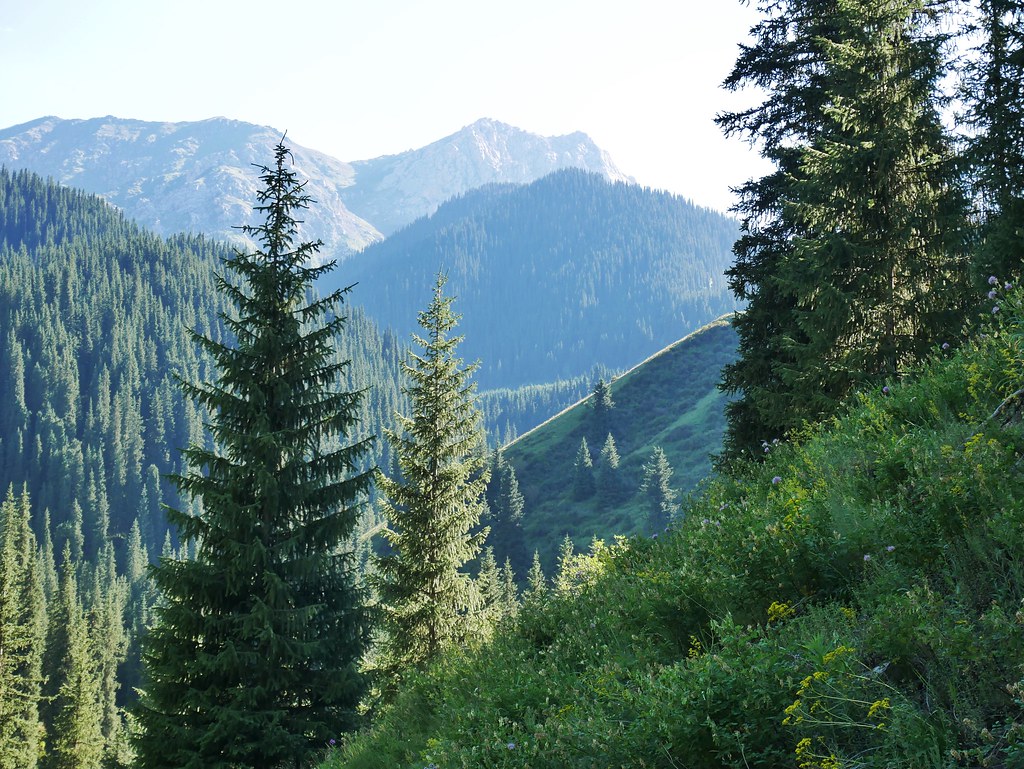 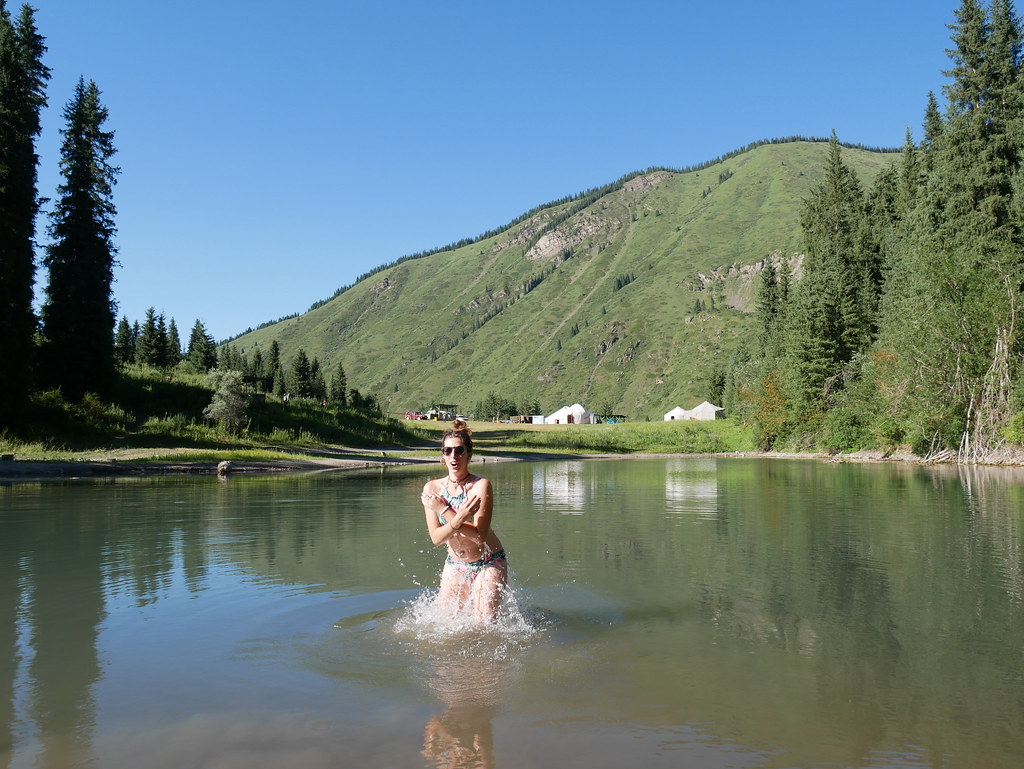 The next day we were heading to Kolsai Lakes which we got to on a 40 minute taxi ride. The road was a hell of a lot smoother than yesterday’s dirt track. We arrived at 8am and seemed to be the first people there, it was wonderful and peaceful and the lake was completely flat with the surrounding mountains reflected in it. 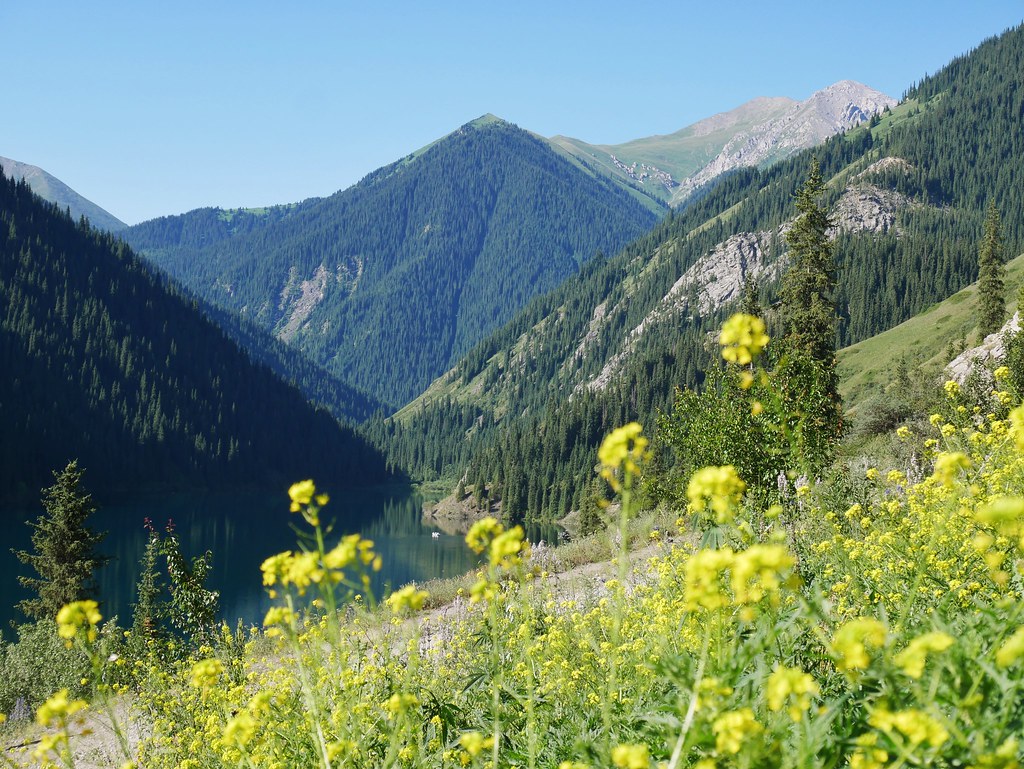 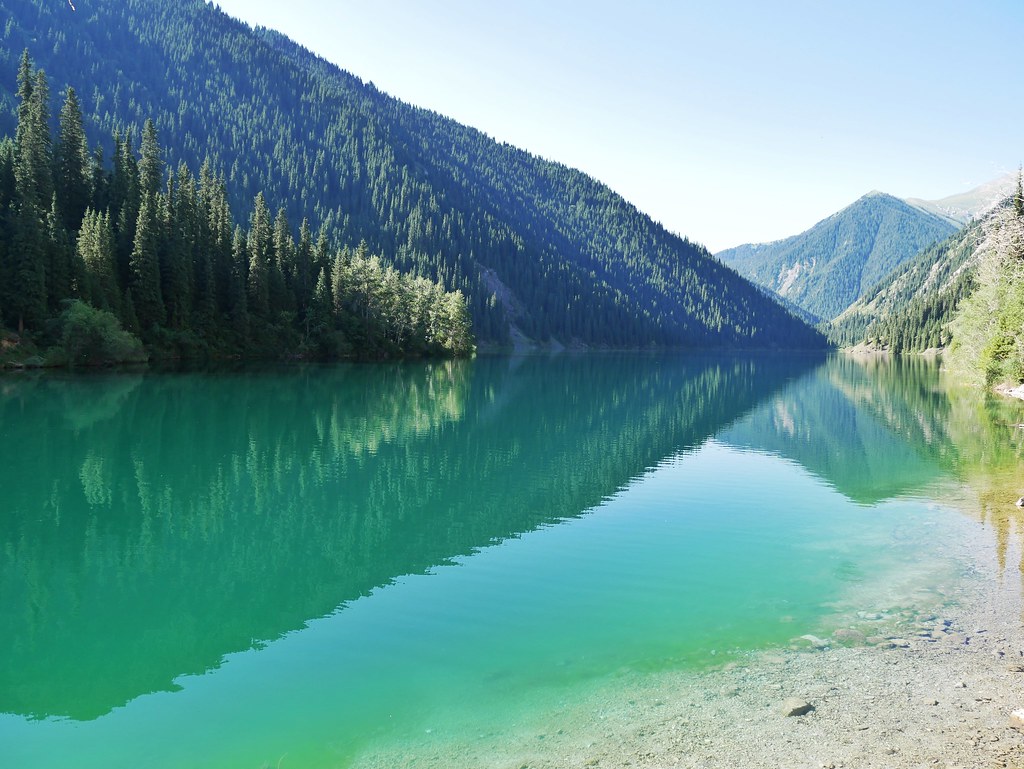 We were doing a 15km return hike from the Lower Kolsai Lake up to the Middle Lake. It started off easy as we walked along a slope above the lake, the views down were stunning so we stopped for lots of photos. Towards the end of the lake we went steeply down and from then on the walk followed a gushing river. It was quite a gradual climb which was good as our energy levels at high altitude is just nonexistent. Most of the trail was heavily forested so we had a nice amount of shade and any time we got close to the river we’d splash our faces with the chilly water. The river went down such a steep slope that it was basically a turbulent waterfall and from that point we had to climb up a bunch of zig zigs. When the forest opened up to summer pastures the area looked just like Switzerland and after 3.5hrs we made it to the Middle Kolsai Lake. The wind had picked up and the lake didn’t look as picturesque as the lower one did this morning when it was tranquil and reflective. It was still nice but not as wow as I expected because lots of people say this is the prettier one. We sat beside the clear water and had our lunch, went for a swim and dried off in the sun and wind. 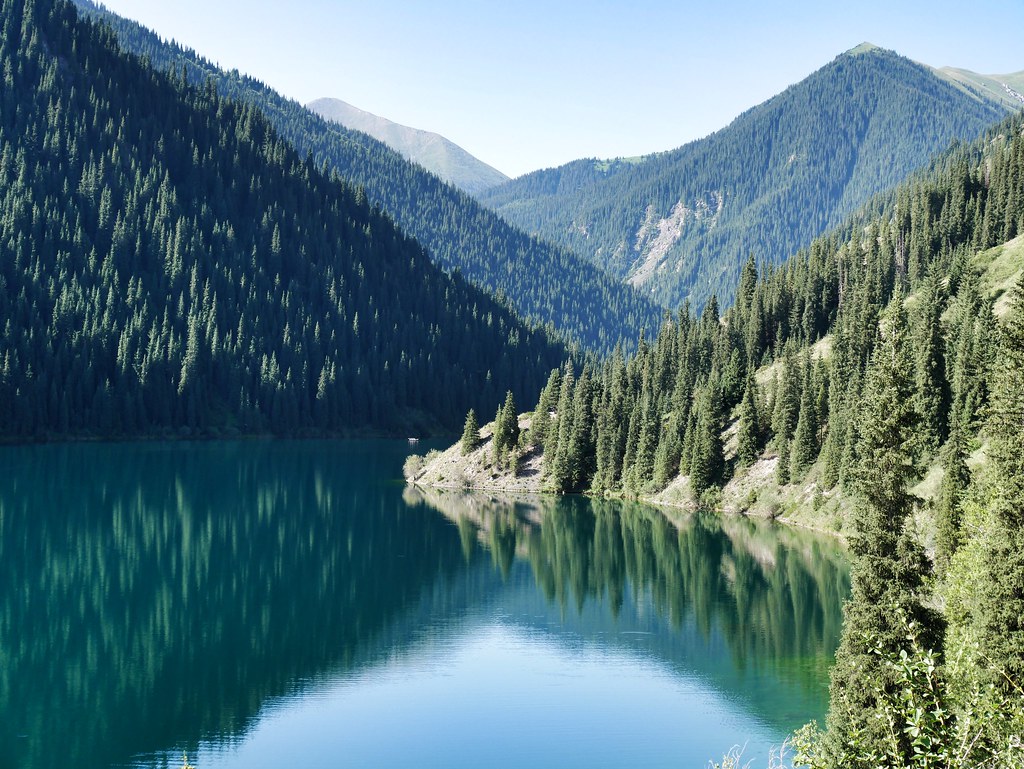 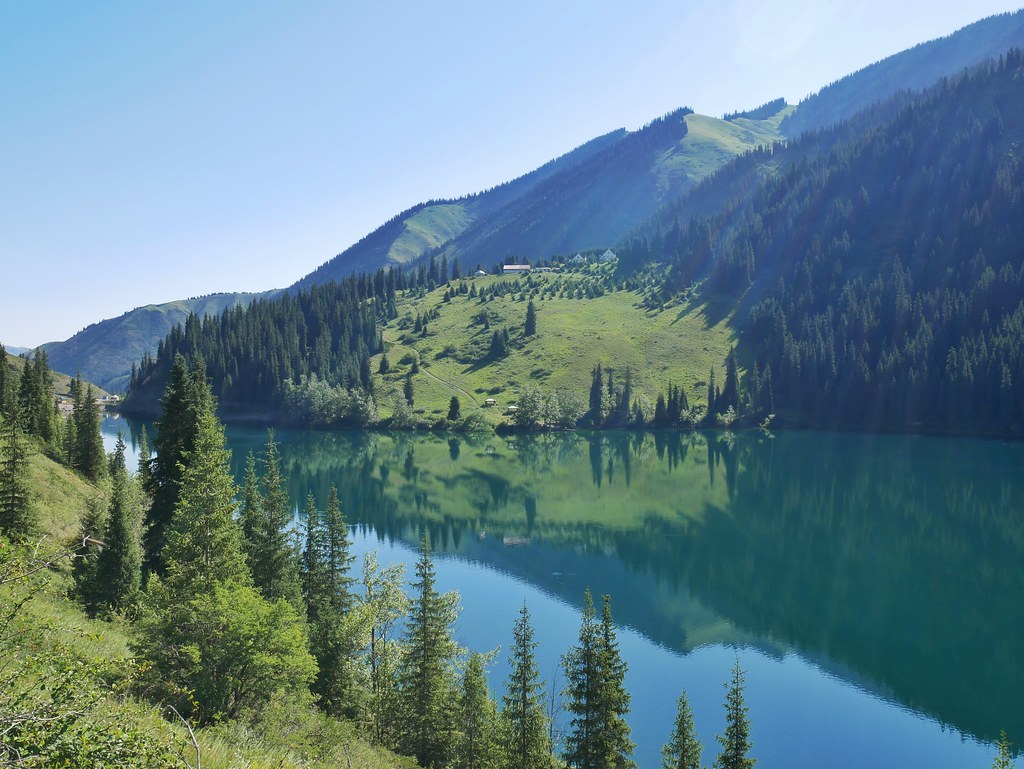 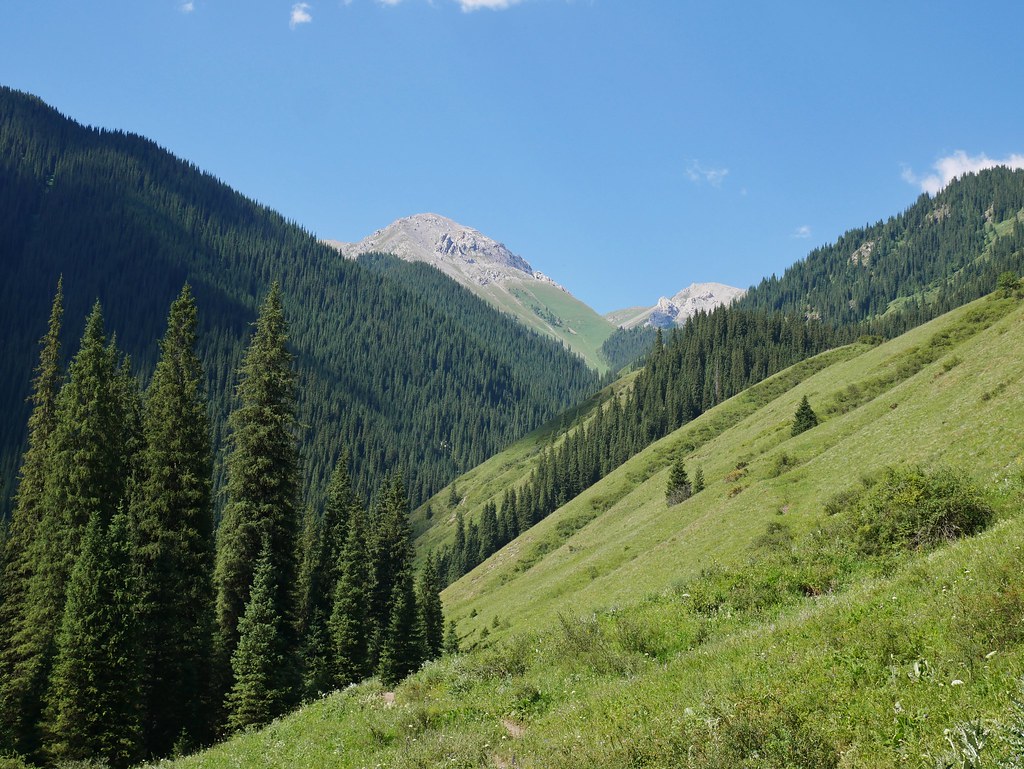 Border guards patrolled the area because the walk continues south, up the mountains and into Kyrgyzstan so they are preventing people from doing this. The guard that checked our passport also asked to film us – nothing official, he just wanted us to wish his mum a happy birthday in our language and afterwards he showed us a bunch of videos of other tourists saying it in French, German etc. 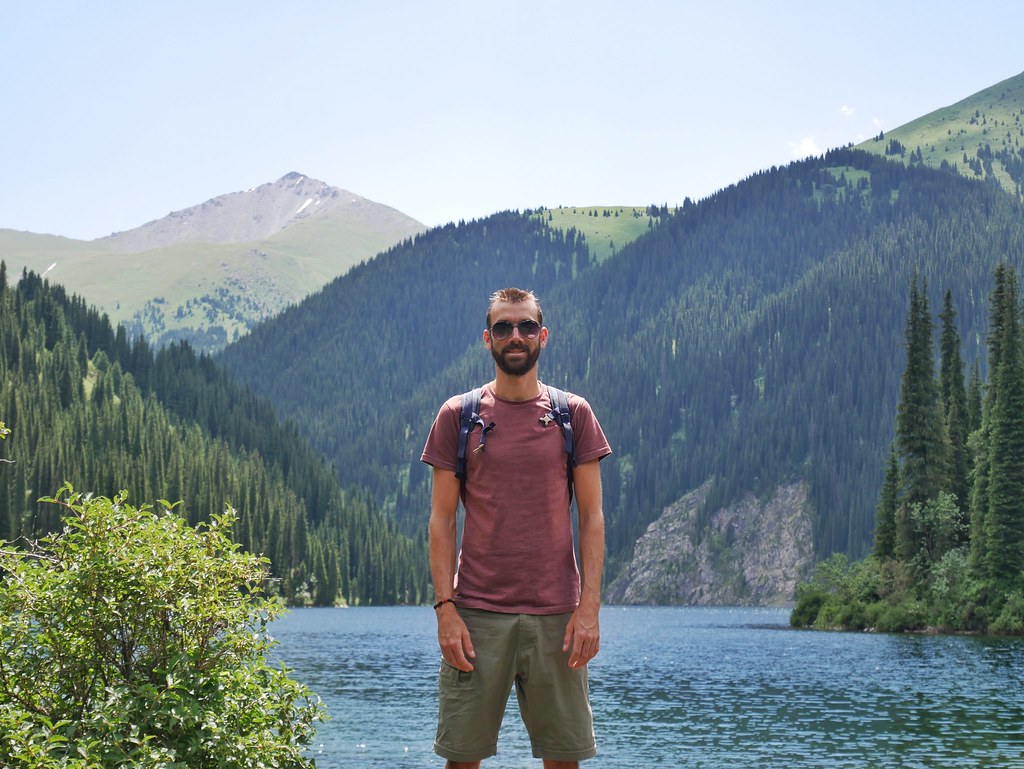 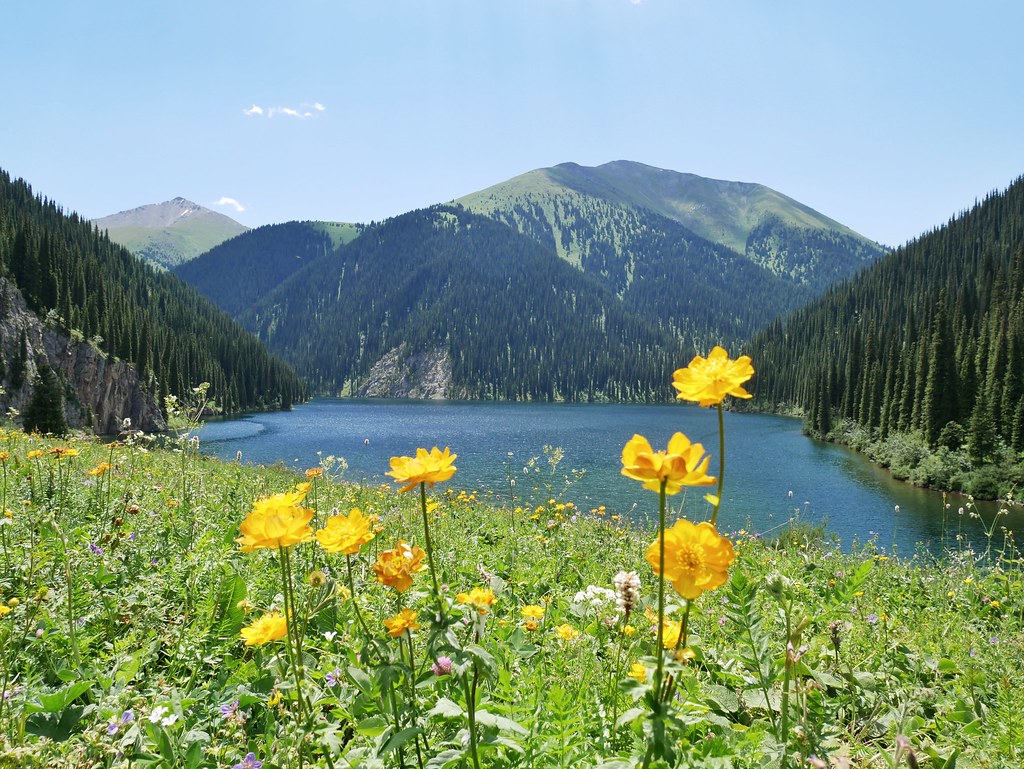 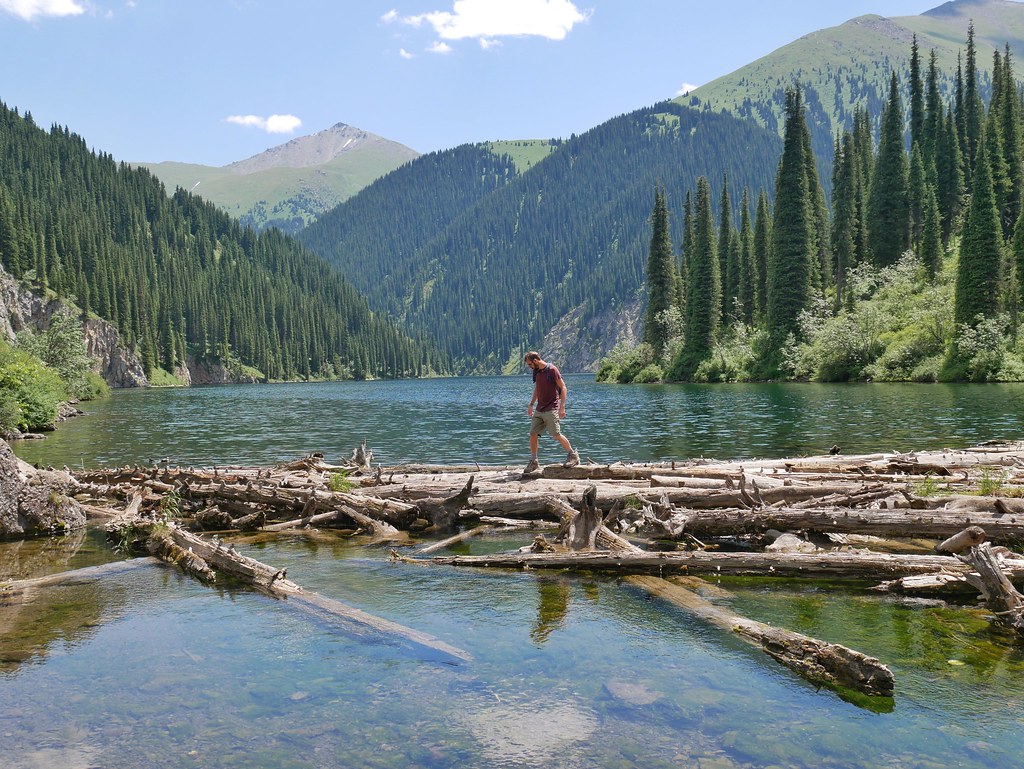 The walk back down took another three hours and was very uneventful walking over the same terrain. When we got close to the pick up location we stopped for a final dip in the lake. Our taxi man (who we easily recognised as he wore a sailors hat and we named him Captain) was sitting next to a really old bloke full of character. It turned out to be his dad, who must’ve been 90 or so and Captain had brought him to the lake for a little outing. He was adorable, in a pinstriped suit and trilby hat and looked like a 1920s mafia member. A storm brewed as we approached our homestay so we spent the evening relaxing and packing our bags, ready for Kyrgyzstan. 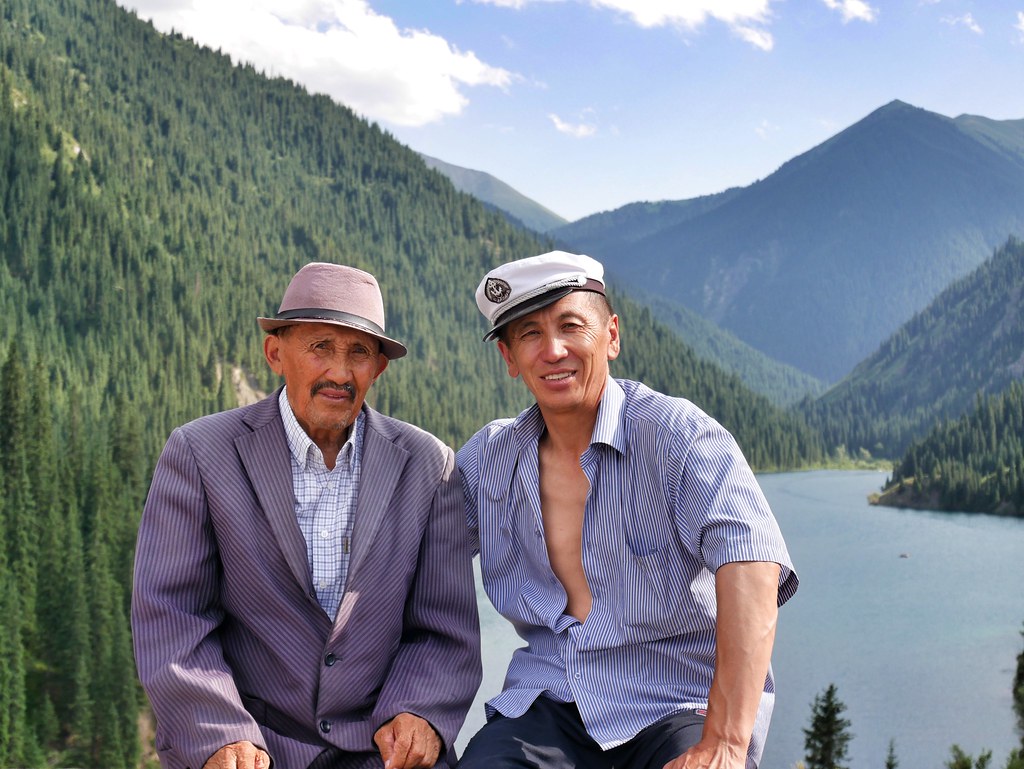