The coastline around Vesterålen is home to some incredible white sand beaches with turquoise water gently lapping the shores. To access them though, we needed a car so one day we borrowed our hosts and went for a little roadtrip around Bø. We received a fair amount of snow earlier in the week and the weather was still a little unsettled but we headed west to the tiny village of Søberg where there was a beautiful curved beach at the end of the road. We walked through knee deep snow to get a view of the colourful sea with a dramatic mountain backdrop. 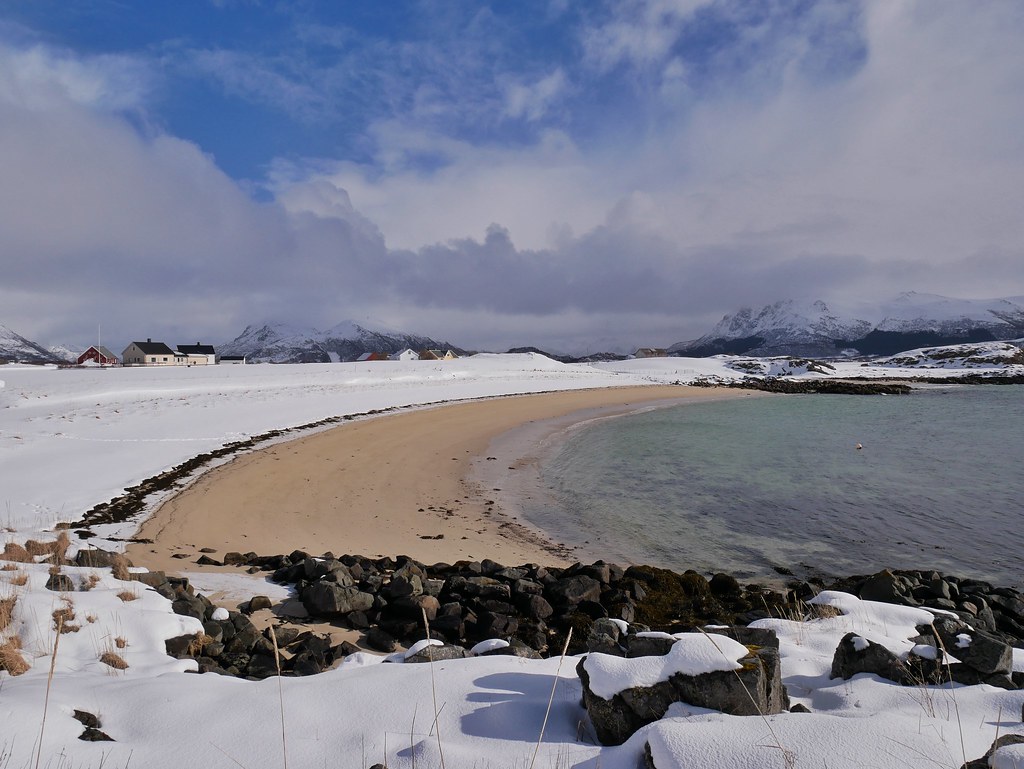 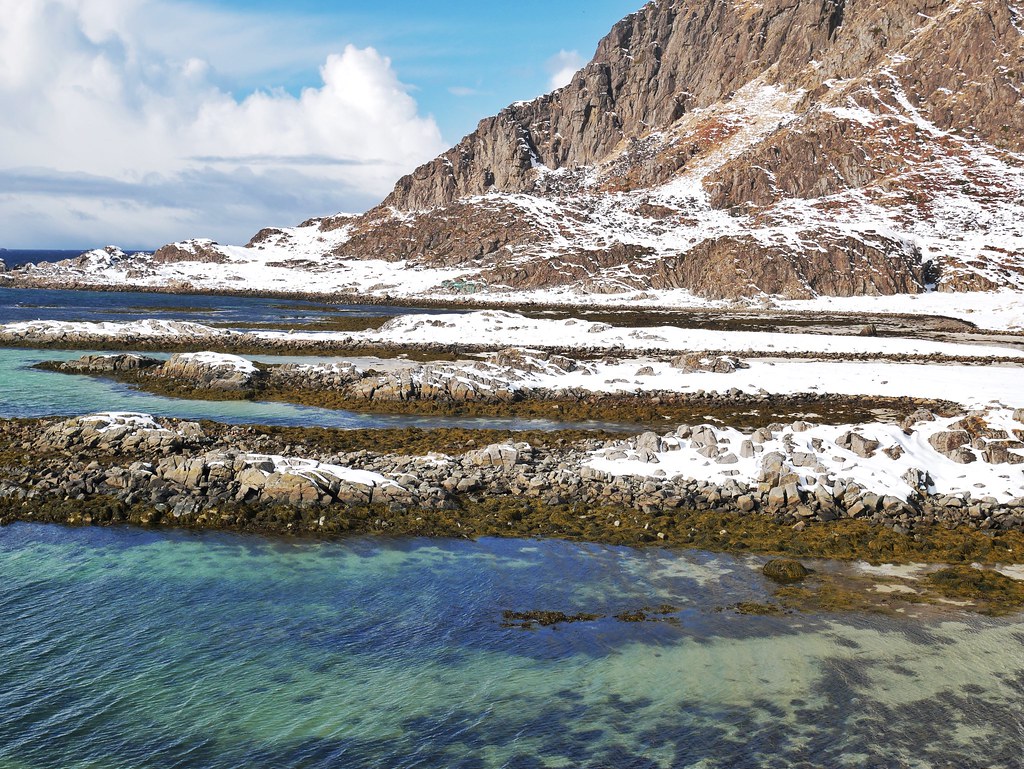 There were two more Caribbean looking beaches with a mix of white sand and snow further along at Skårvågen and after exploring them we set off north to Hovden. The weather was constantly changing along this route, snow storms hit us hard as we navigated around the narrow roads with the sea on one side and sheer mountains on the other. As quickly as the storm came, blue sky replaced it. Eagles hovered alongside us and seagulls swooped in front of us until we reached the very end of the road in Hovden. We literally drove as far as we could along a causeway with a lighthouse directly in front of us and we stopped there for lunch in the car. It was a pretty windy day so the waves were crashing into the causeway from the open sea. 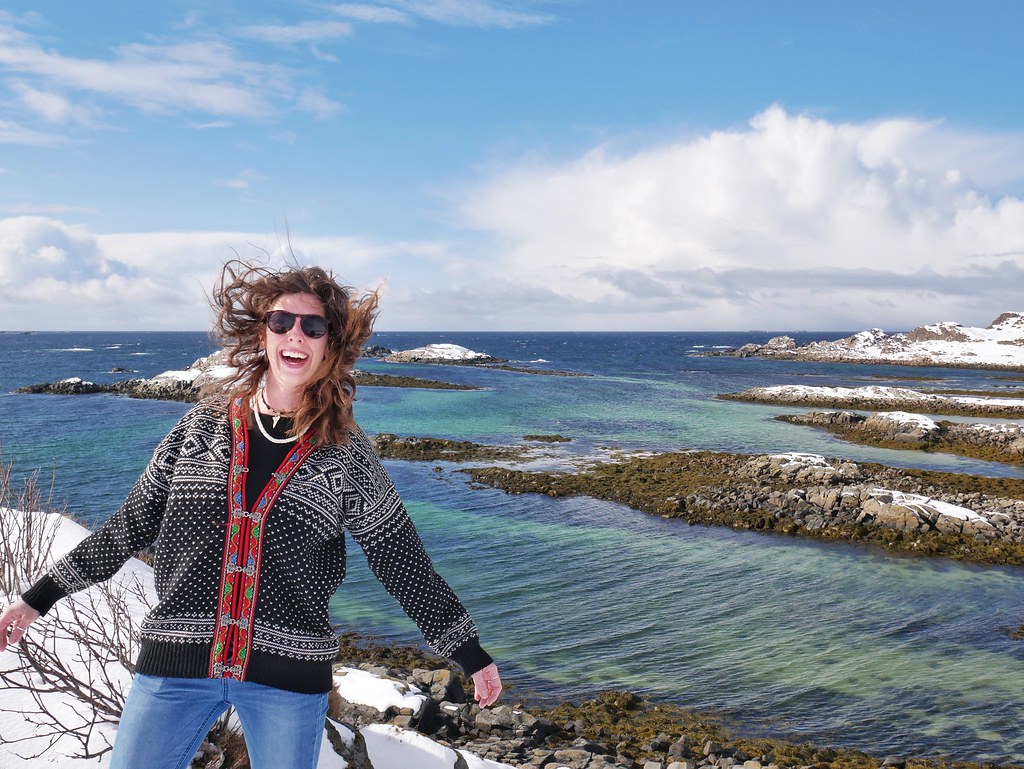 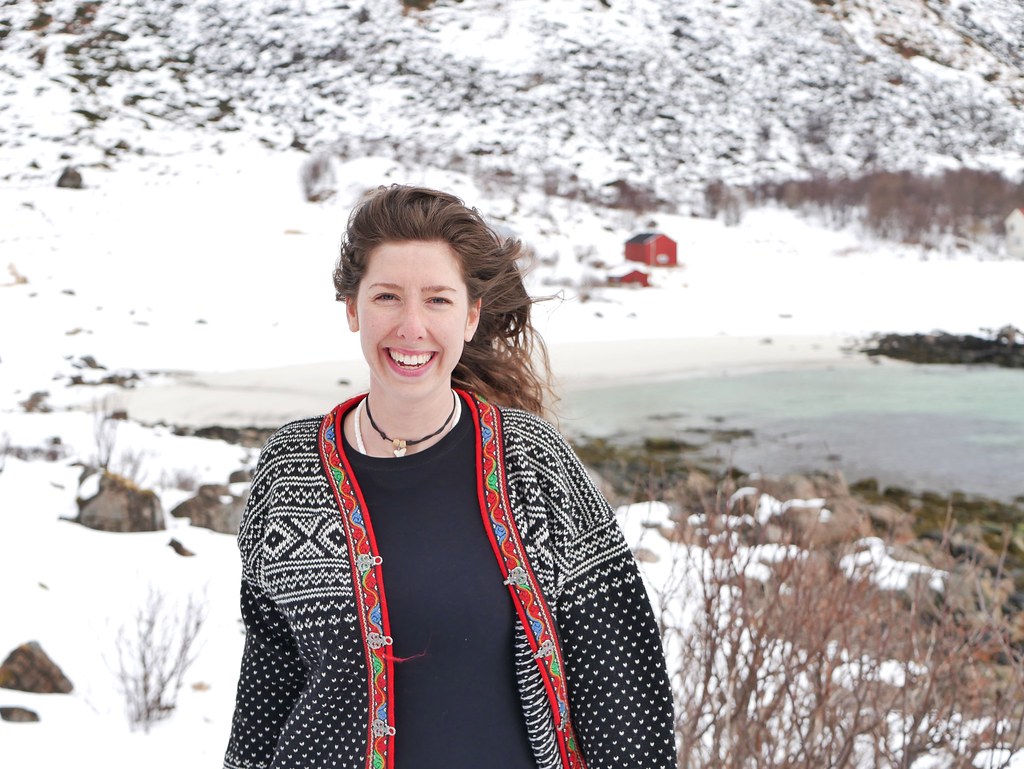 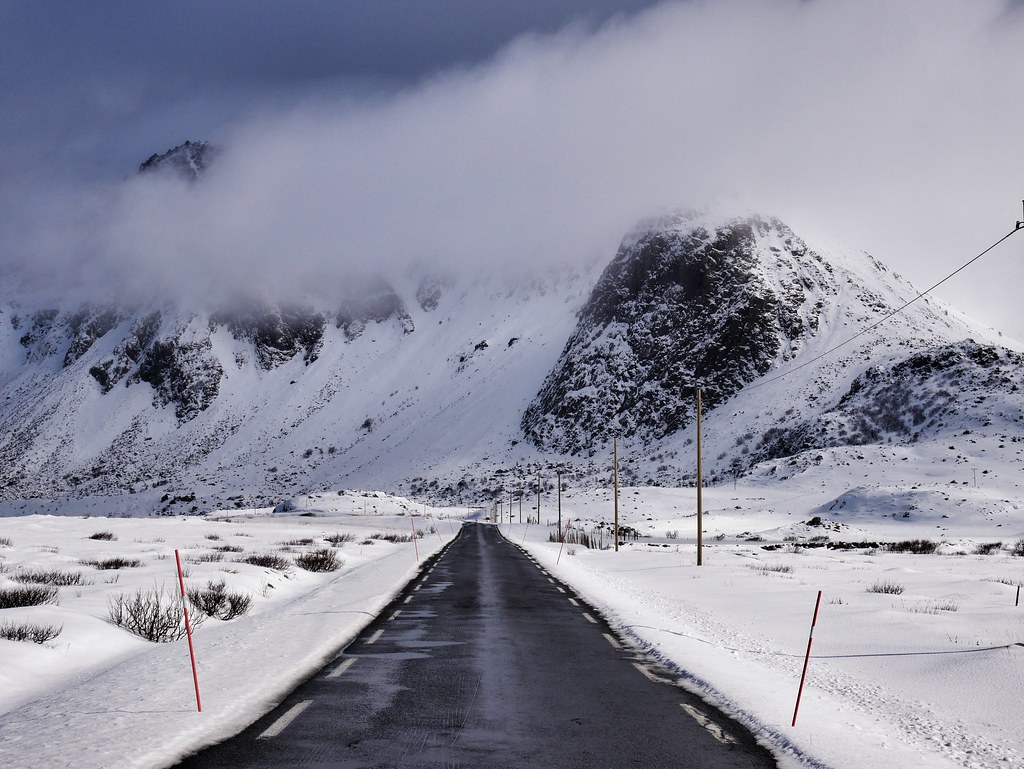 Wooden fish racks lined the shoreline by the village and there were thousands of cod hanging up and drying in the cool air and wind. We walked through the rows of Stockfish and noticed quite a mess of blood droplets on the floor. When we looked up at the fish filling the sky above us, we realised they were hung up very recently and were still dripping so we quickly retreated. The heads were missing from all the fish as they are dried separately and sent to Africa. The tongues are removed though and it’s actually tradition for the kids to do this job. They basically have the fish head in hand and push the bottom of the face containing the tongue onto a long spike and cut the back so the tongues pile up on this spike. They get pocket money to do this but some of the kids have realised their on to a good thing so they cut hundreds a day, earning themselves up to £100 an hour. 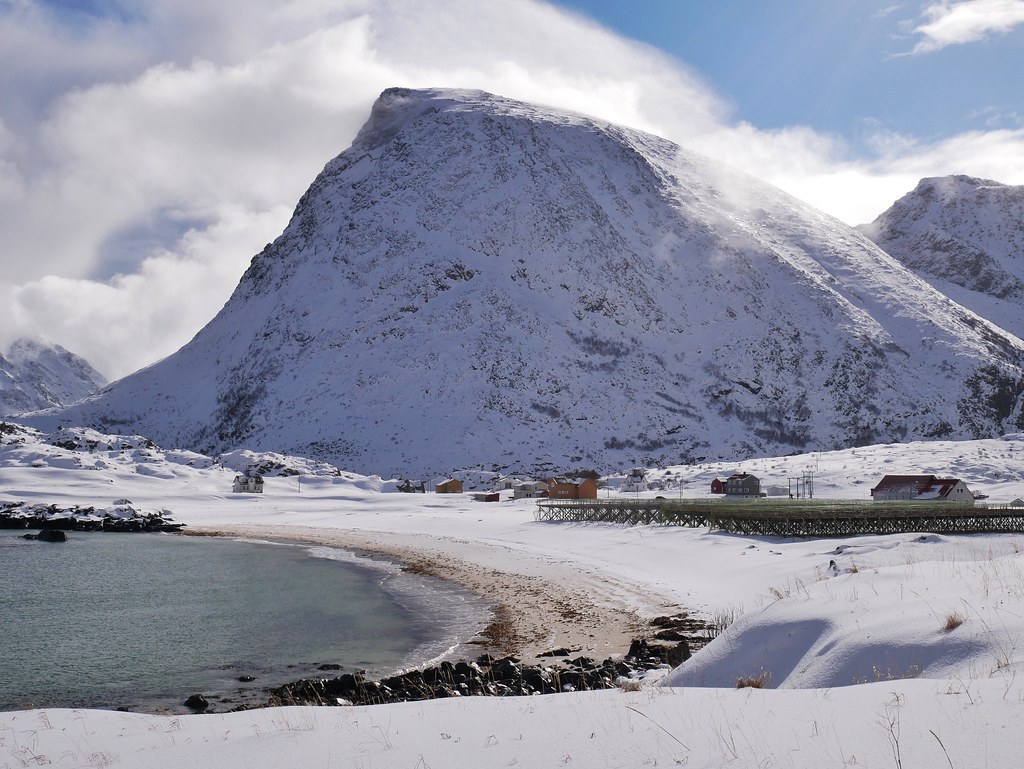 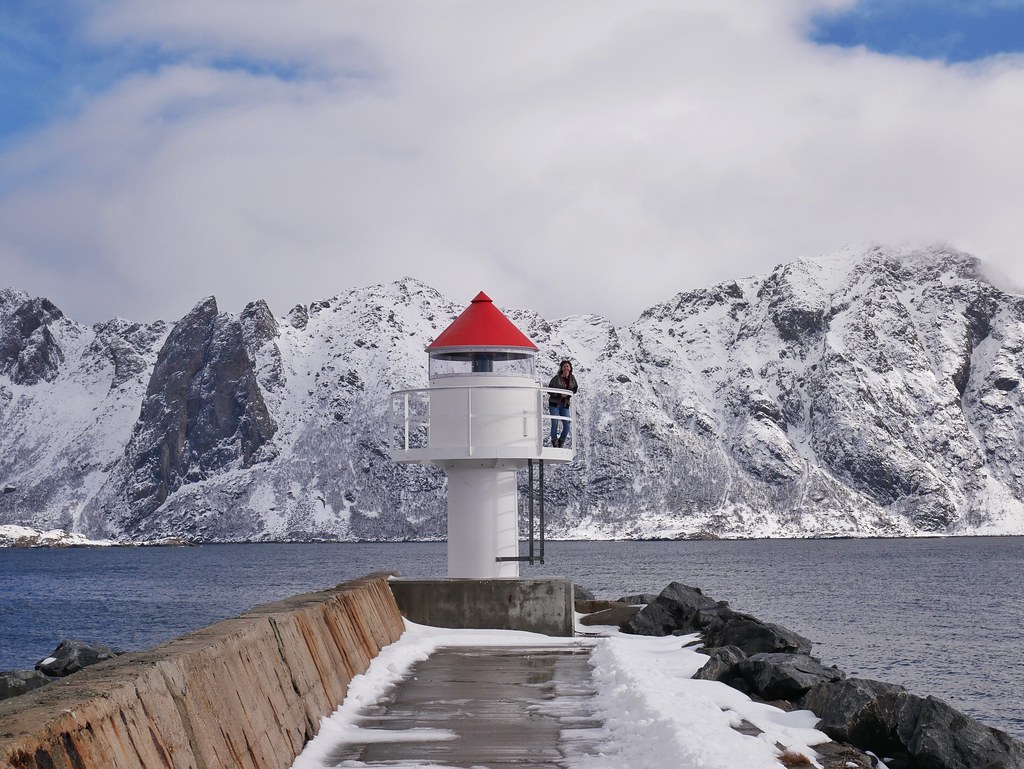 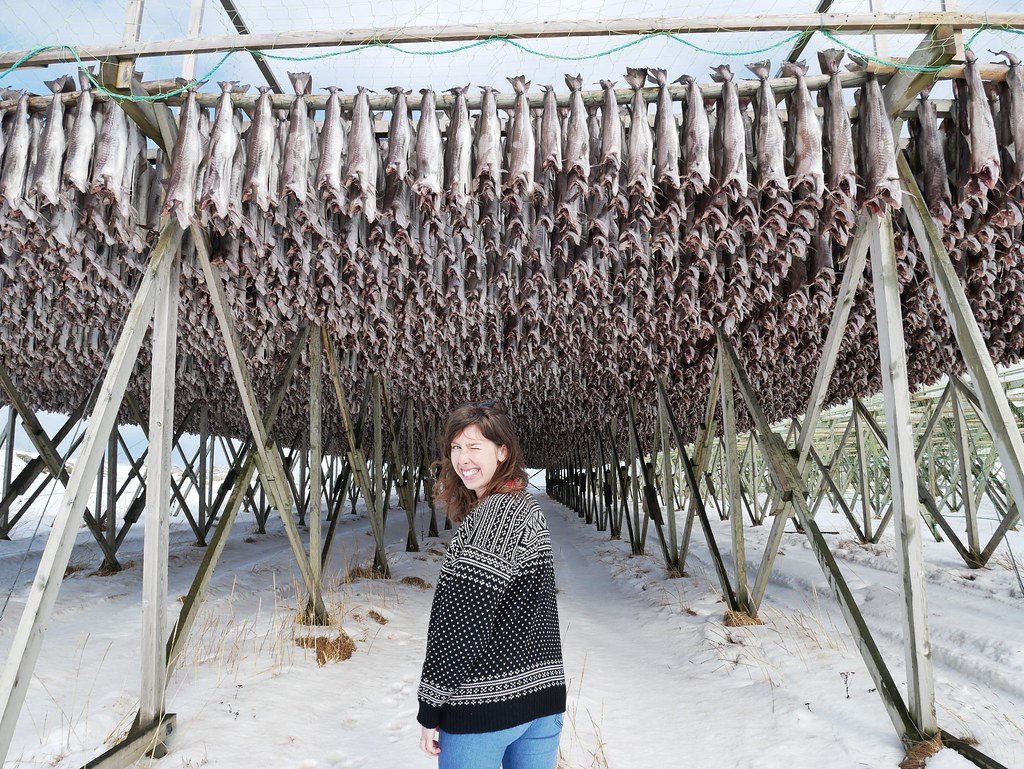 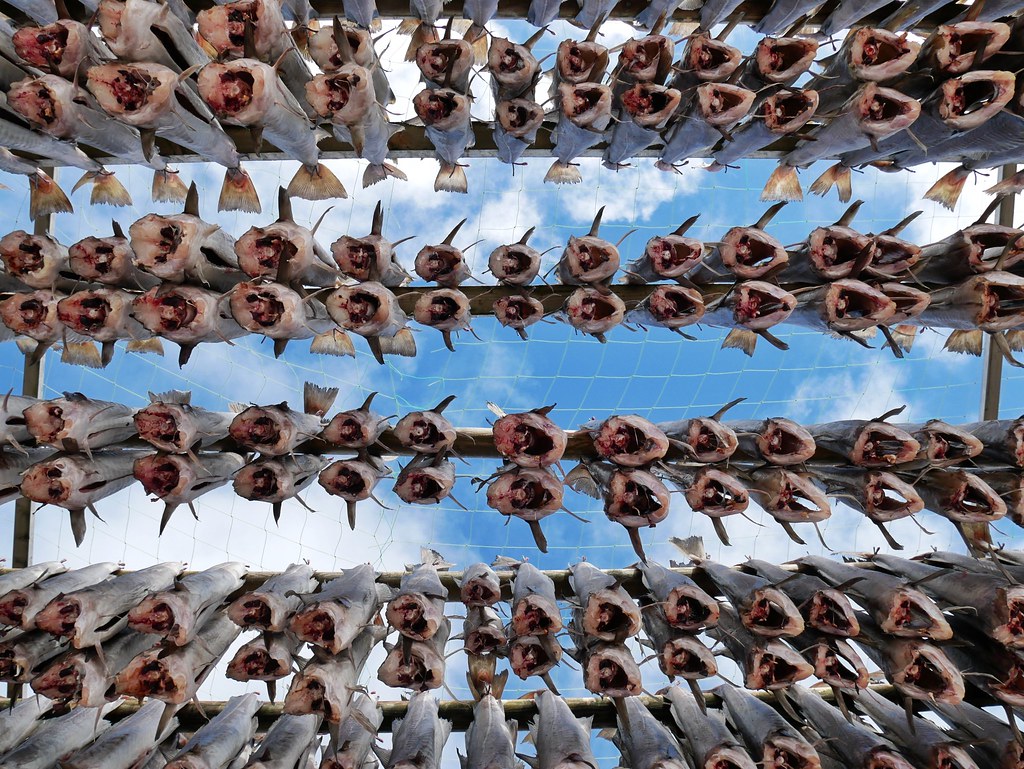 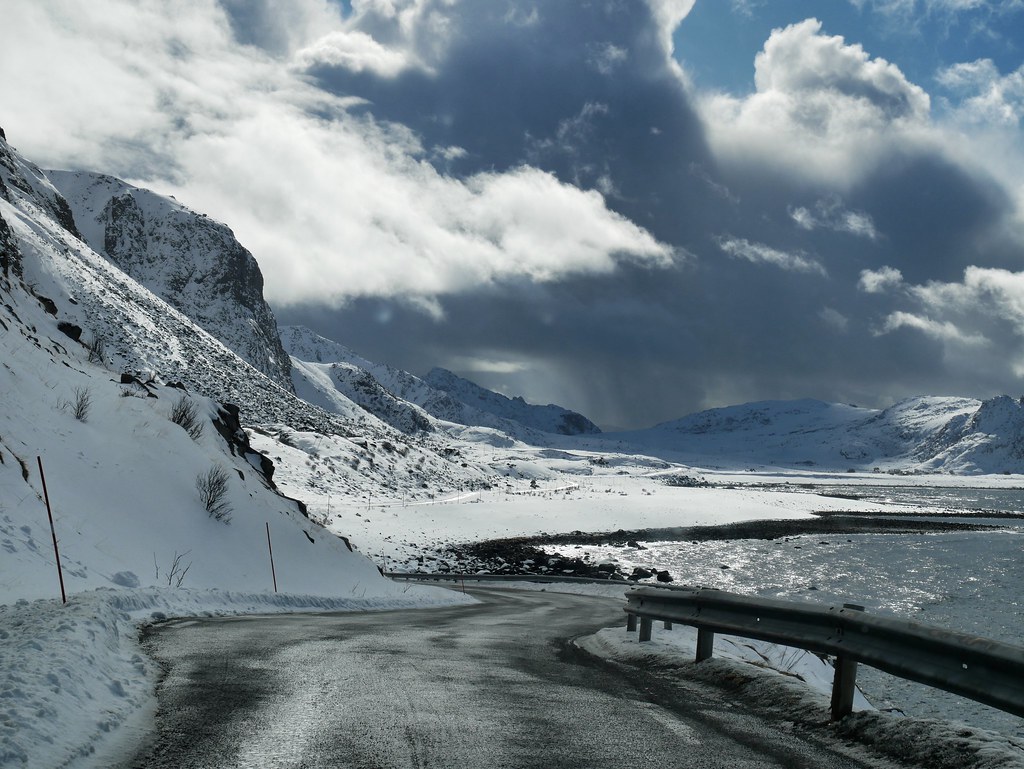 A few weeks later we headed back to Skårvågen with the other volunteers to hike up the summit named after the village. The surroundings looked totally different compared to our last visit and almost all the snow had melted. Sadly, on our way up the mountain I stopped to sit on a rock and about 10 minutes later our friend started giggling like a school kid at me. I touched my bum and felt something foreign, when I looked down there was a Nutella looking substance on my hand and my friend was roaring with laughter at my expense. I have no idea what animal it was from but thankfully it didn’t smell like dog or human shit….Anyway, I had to slide down a slab of icy snow to remove it and when I reached the bottom I looked back and saw a long brown skid mark in the snow. 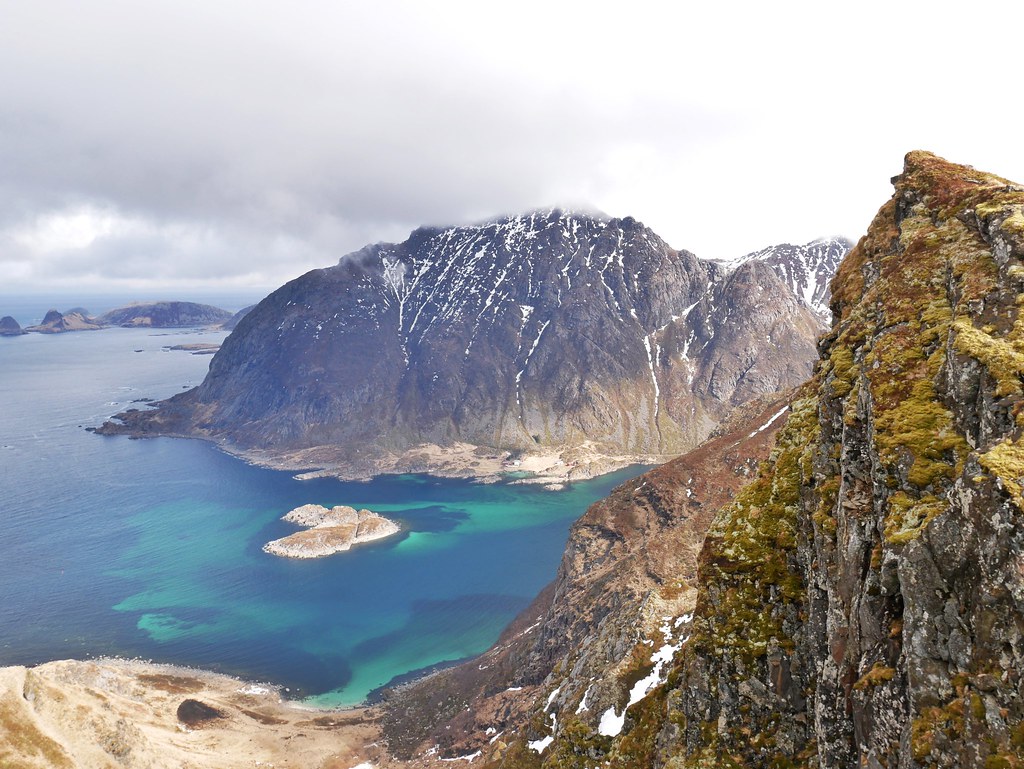 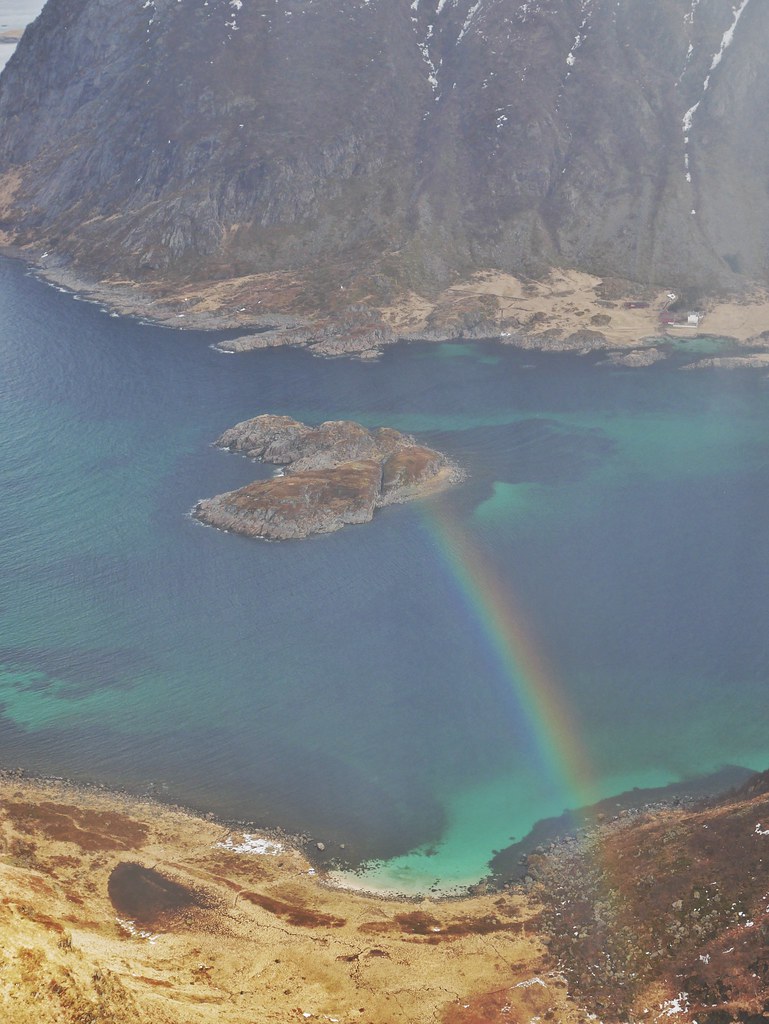 Further up we came across a very cool sight – The Door. It was a perfect door shaped hole in the side of the mountain looking out at the sea with a small bridge on the top which we walked along. The views were very impressive as we neared the summit with lots of sheer drops, dramatic cliffs and turquoise patches amongst the deep blue sea. 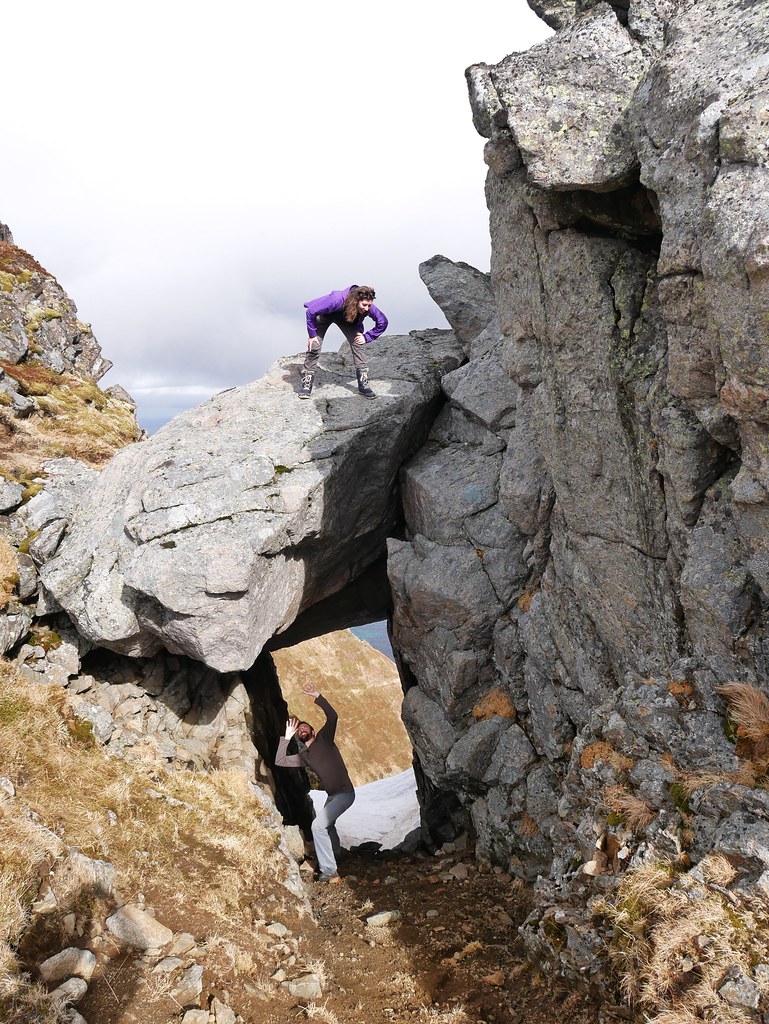 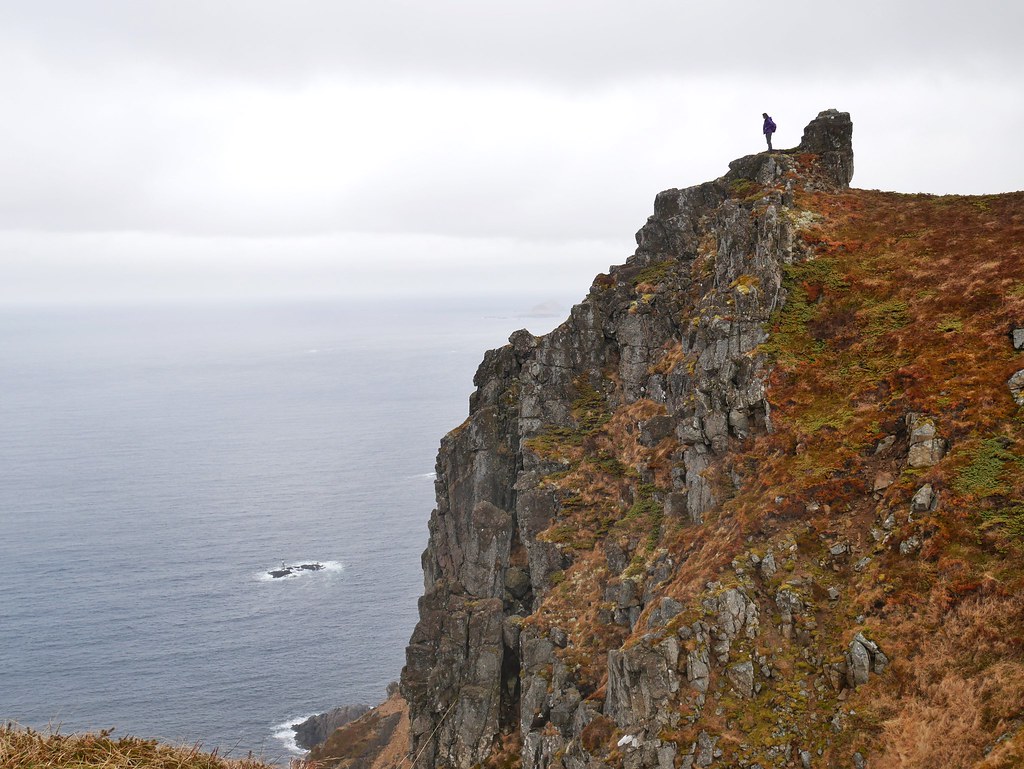 The sun was shining as we reached the summit but clouds quickly formed and drifted past us. A mix of snow and rain began to fall and it created the first rainbow we’ve seen in Norway. From the top we saw a ridge-line heading out into the sea so we decided to hike along it. Eagles flew high above us as we walked along the narrow track to the end of the trail. Two beaches were directly below us so we decided to bushwhack down the mountain to them instead of taking the same way back. It was a pretty steep but manageable route, although when we reached the bottom and looked back up we were shocked at how vertical it was. We arrived at the white sand beach with the soaring peaks behind it and soaked in the almost tropical view before heading home. 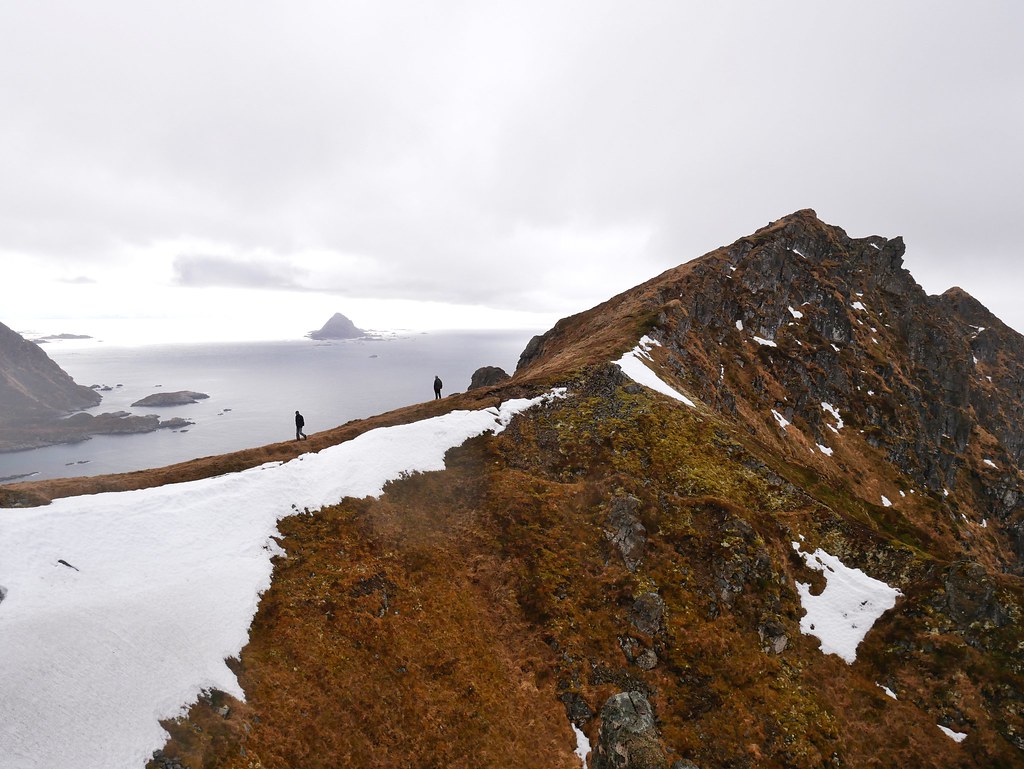 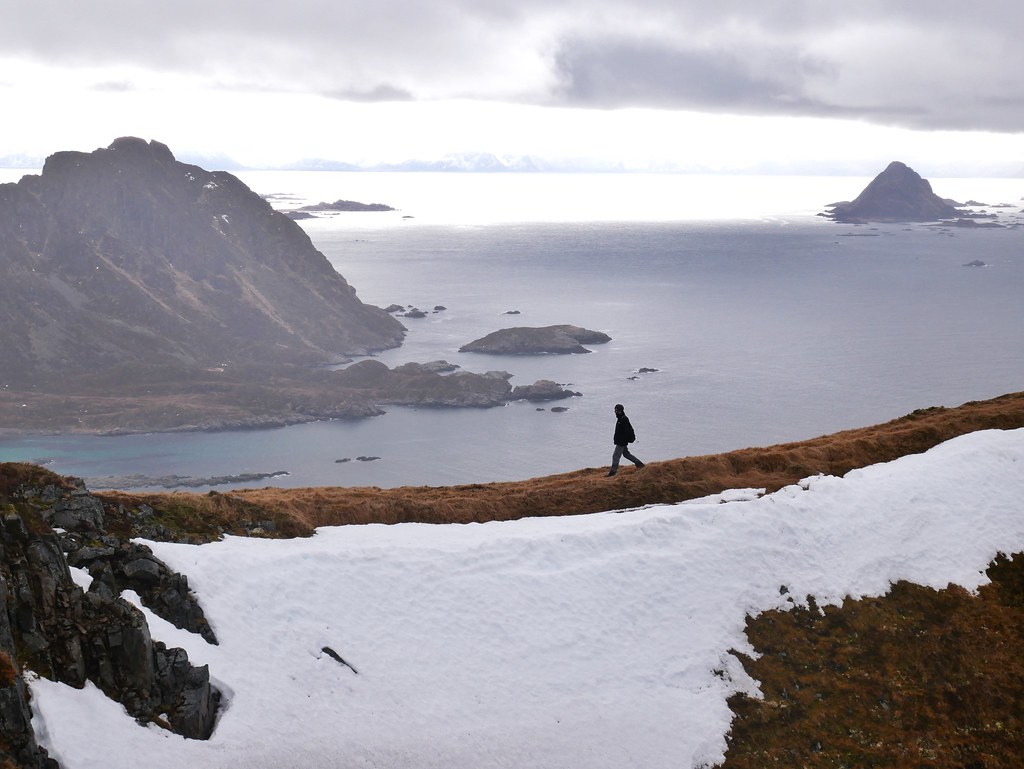 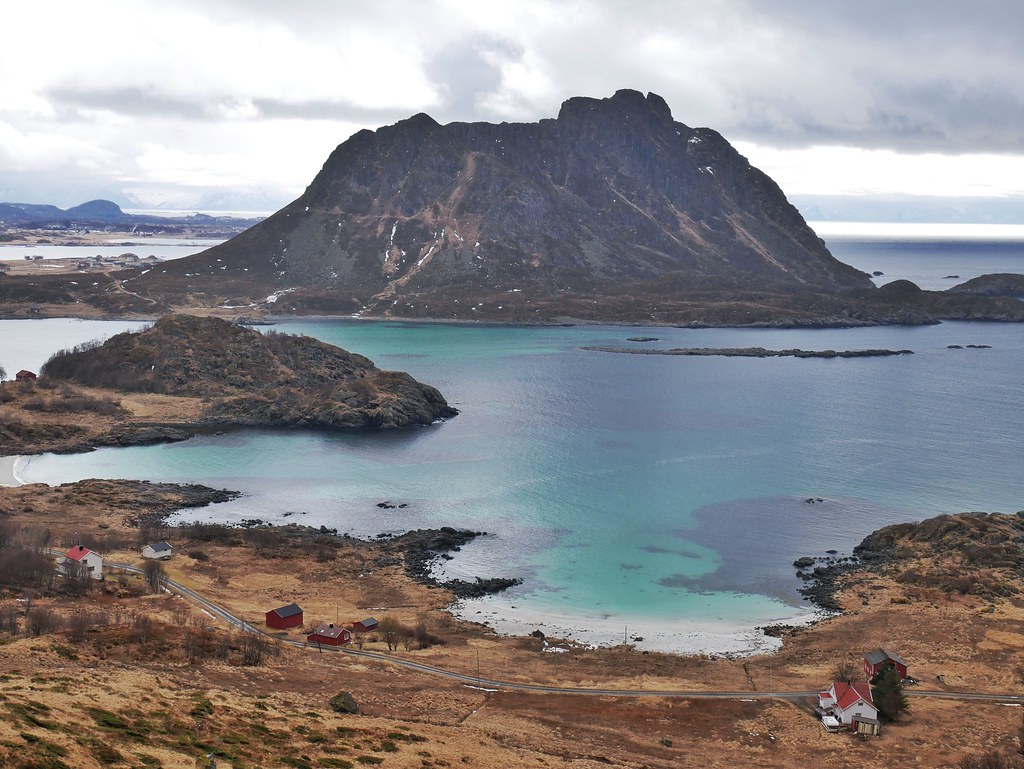 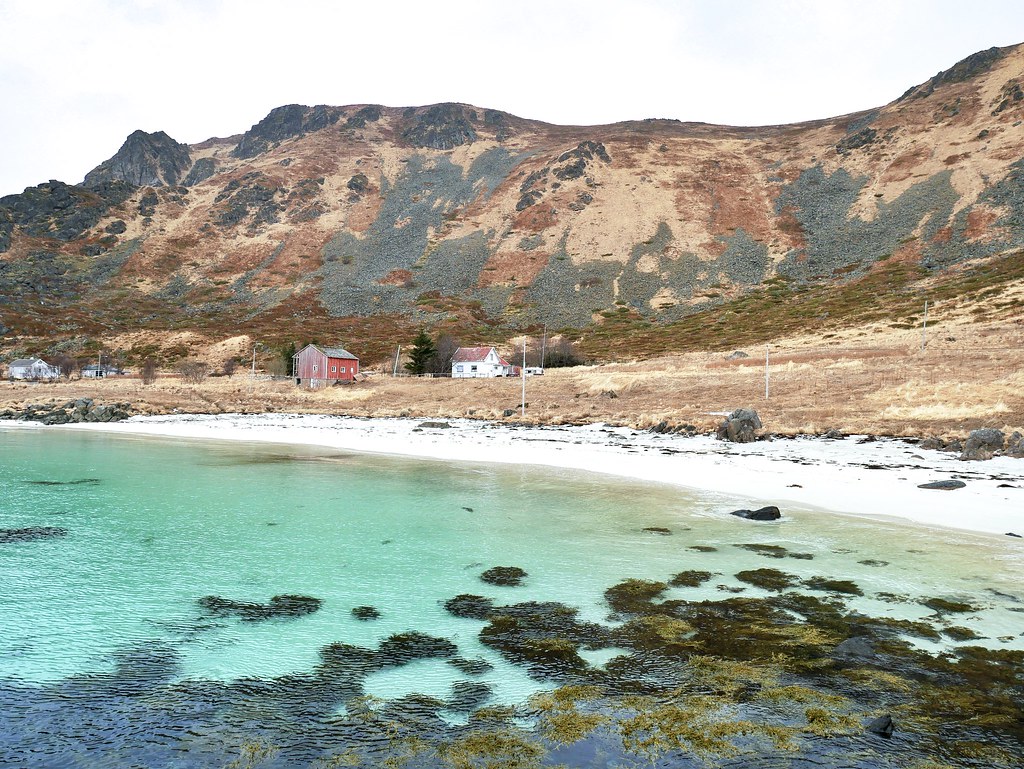